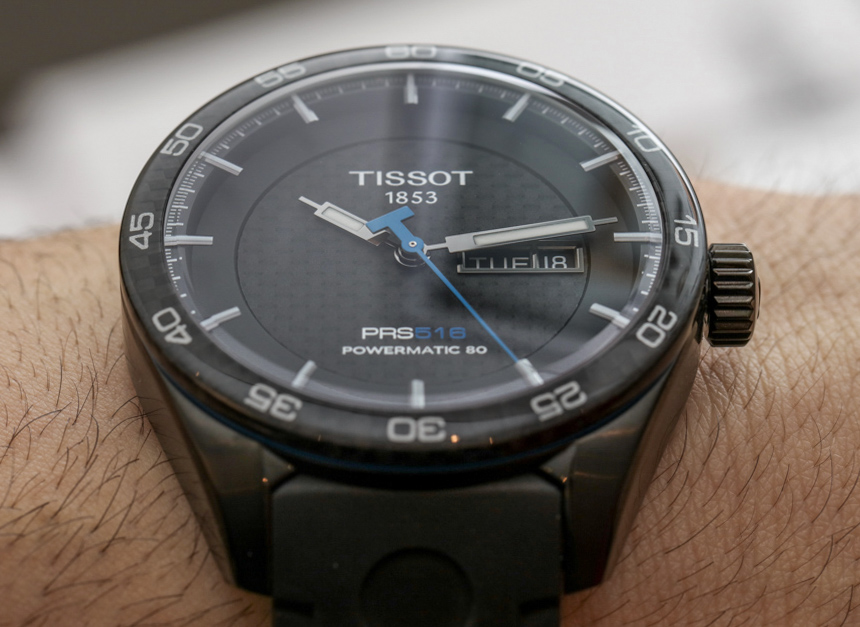 Back in July 2016, the monthly aBlogtoWatch giveaway was the Tissot PRS 516 Automatic watch. David W. from Bristol in the United Kingdom won the watch and has a lot to say about the piece. Here is David’s review for the aBlogtoWatch audience. Once again, thanks to David and all the other watch winners who share their experiences with the world. And a note: we had some of our own images of this same watch, so in addition to David’s pics we added those into the post to help better show the Tissot PRS 516 Automatic watch.

I was thrilled to learn I had been selected to receive the July giveaway – the Tissot PRS 516 Automatic, carbon version, with Powermatic 80 movement. The watch duly arrived, along with a Tissot pen and other goodies including an informative book The Story of a Watch Company published in 2002, as Tissot entered its 150th year. Tissot’s PRS516 range takes design cues from 1960s motorsports. Rather than claiming an association with a specific race or car as others do – with varying credibility – Tissot have reinterpreted the design of their PR516 of 1965, the one with the distinctive, perforated steel bracelet. The ”PR” signifies “Particularly Robust” – a fair description – and the “S” adds “Sport” to today’s versions. Clearly tough watches, then, but also stylishly designed and well-finished. 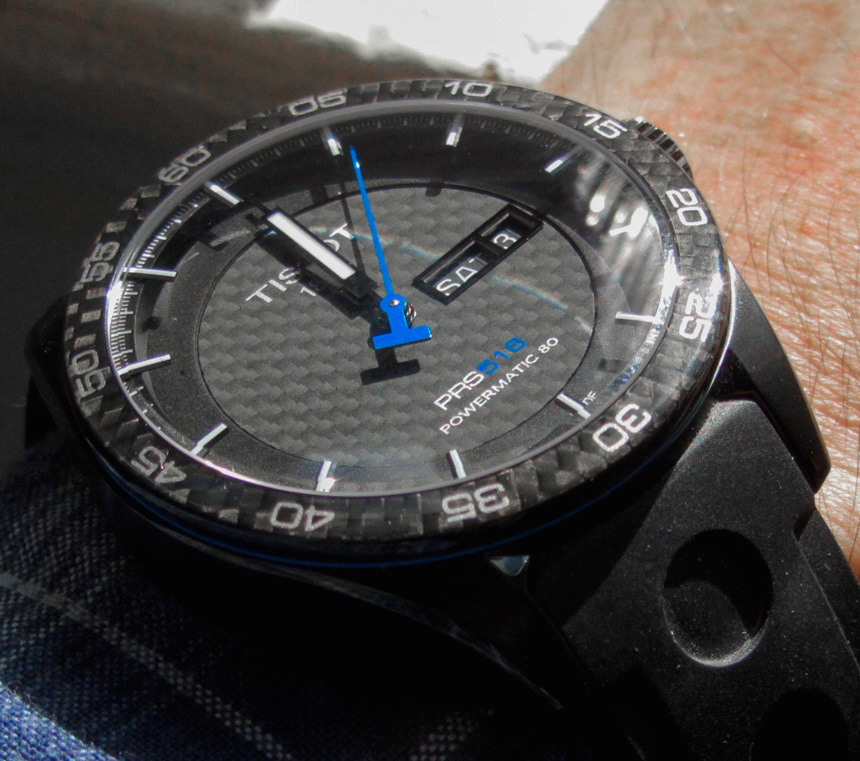 The watch has a commanding presence, being fairly chunky at 42mm in diameter and 12.9mm thick – though these are entirely appropriate dimensions for a modern sports watch. With carbon as its defining theme, it revels in several shades and textures of black – it’s a cool-looking watch!

This carbon version has a black PVD-coated steel case, with brushed surfaces and polished edges. The face and bezel feature fine-weave carbon fibre, which displays a kind of intrinsic guillochage. While the shapes of the case, hands, and other details are distinctly vintage, the predominantly black aesthetic and hi-tech materials speak of more recent times. A pleasing mid-blue accent appears in three places: the seconds hand, the “516” identification, and a thin ring under the bezel. Other colours – including red, often associated with speed – appear elsewhere in the PRS516 range. 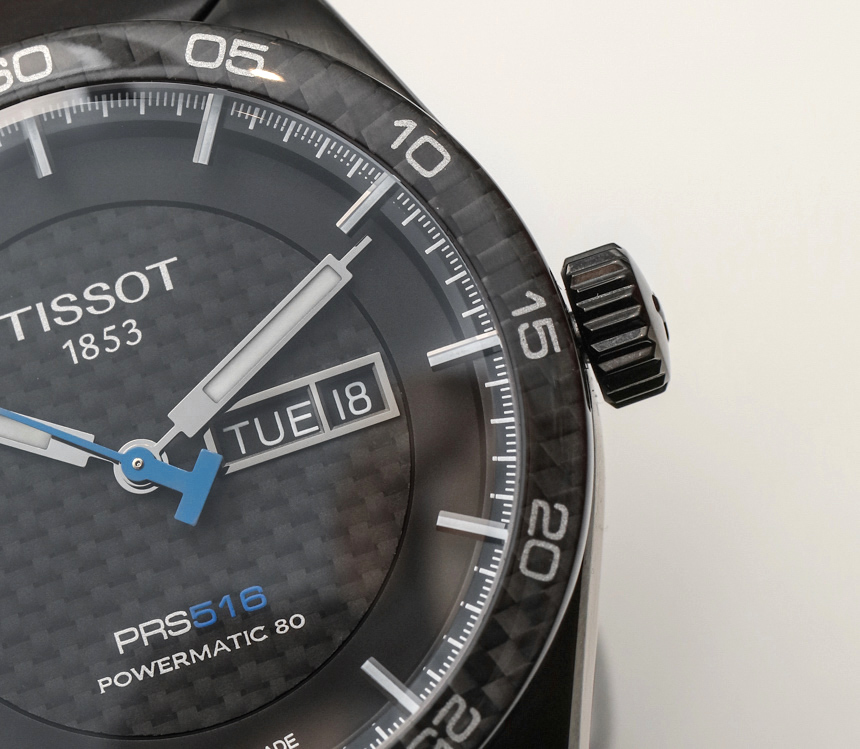 The fixed carbon-fibre bezel has numerals at five-minute intervals and is narrow, giving the watch a wide face that is clearly legible under a sapphire crystal. Tissot’s official images of this watch, understandably, show the carbon fibre at its most dramatic – but most of the time, in gentler light, the effect is more subtle. In slanting sunlight, though, it lights up with prominent reflections.

The face displays a variety of textures and has a deep three-dimensionality. The central circle of carbon fibre and the plain black outer ring contrast strongly with the hands, minutes track, and hour indices floating above; the hands, unusually, pass under the indices. The bezel numerals, minutes track, Tissot 1853 logo, and other text are in a restrained silver-grey – clear but not too shouty. 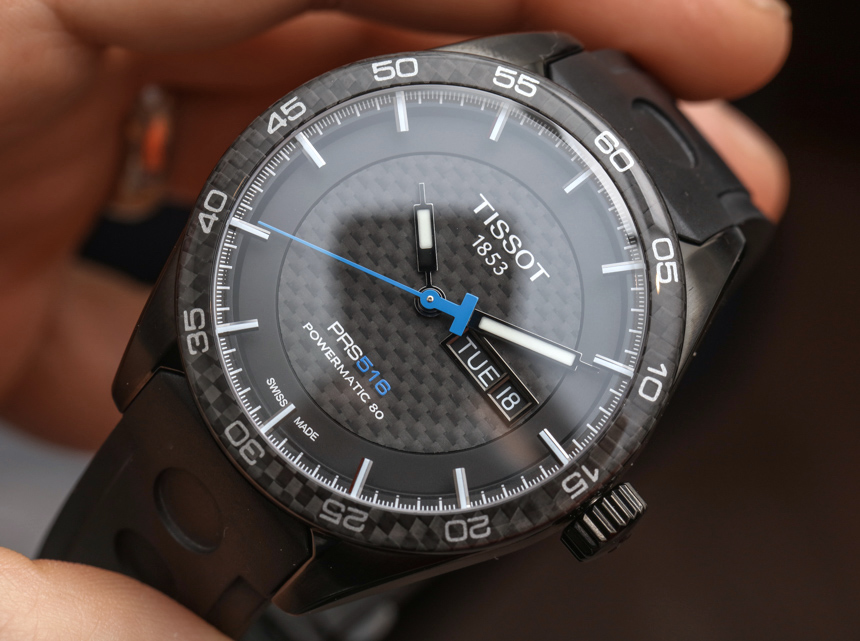 I find “Swissness” an enjoyable quality in a watch, being appreciative of the distinguished history behind it. As many of ABTW’s well-informed readers will know, protestant refugees flooded into Geneva during the mid-sixteenth century, fleeing from persecution in France and elsewhere. Some of them were goldsmiths, silversmiths, and enamellers. Stern Calvinist disapproval of ostentatious displays of wealth led to a ban on decorative jewellery, so the craftsmen diverted their skills into making clocks and watches, which performed the valuable service of getting the populace to work and church on time. Vanity and frivolous extravagance were sins; hard work and punctuality were virtues! 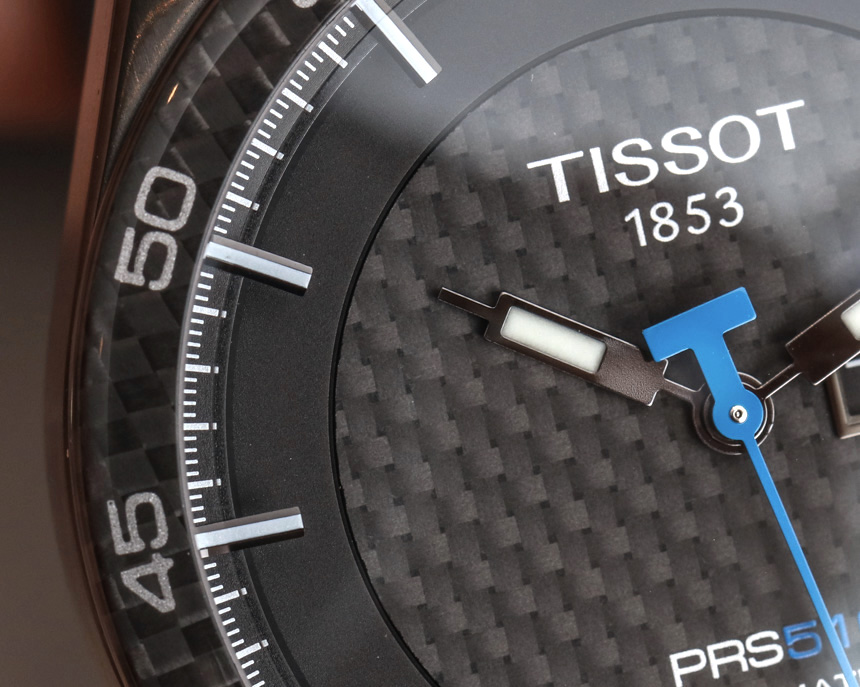 Thus was founded one of Switzerland’s signature industries, alongside banking and chocolate, which thrived and gradually expanded to the French-speaking region between lake Neuchâtel and the French border – including the Jura mountains, the Vallée de Joux, the St Imier valley, and the now-famous watchmaking towns of Le Locle and La Chaux de Fonds. Charles-Félicien Tissot and his son Charles Emile, of Le Locle, began trading in 1853. Tissot grew to dominate the middle market and continues to be the premier traditional Swiss watchmaker by volume. Since then, Tissot has played a substantial role in the salvation of the Swiss watch industry; I am pleased to own a watch made in Le Locle, by a company with such solid historical credentials. Moving on back to the watch, now! 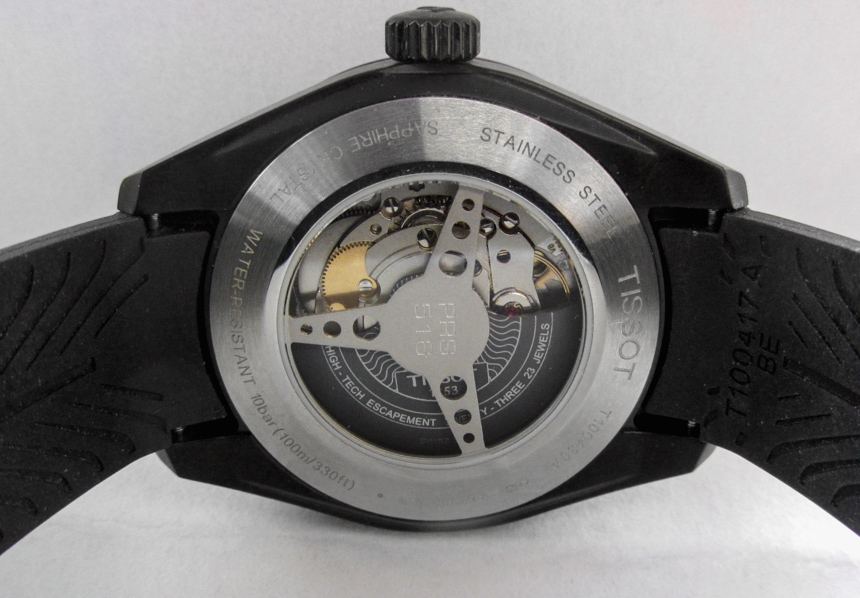 The exhibition caseback reveals the Powermatic 80 movement, an evolution of the ETA 2824, the technicalities of which have been ably described by Ariel and others in previous posts. This particular watch doesn’t have COSC certification, though some other Tissots with Powermatic 80 movements do, I believe. However, given my pattern of wear, and placed crown-down overnight, it gains just under two seconds per day, which appears to confirm Tissot’s known ability to achieve high standards of accuracy. 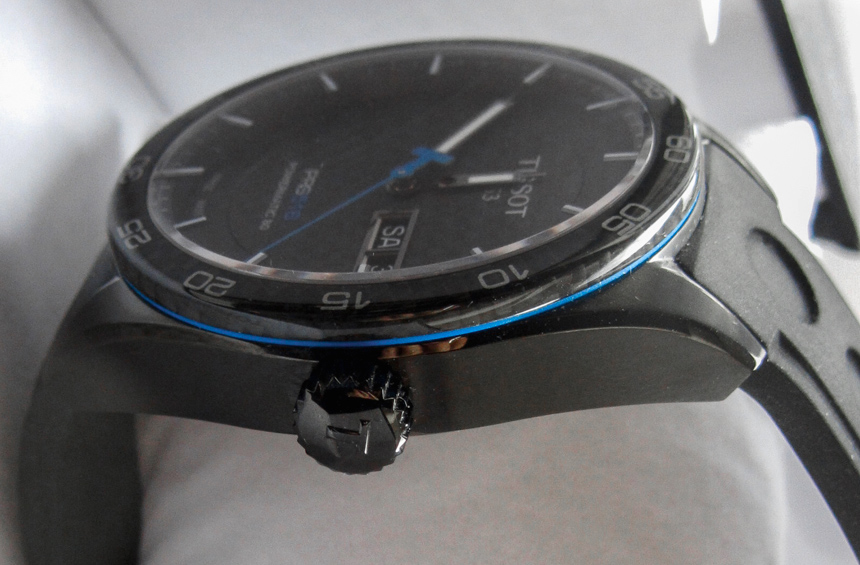 The 80-hour power reserve got me thinking about exactly what that means. At its most simplistic, if it’s fully wound it will run for just over three days. But if you have a sedentary lifestyle or mobility difficulties, and can achieve at least half of the reserve each day, it will keep going overnight until the next day, with a little left in the tank. Repeated every weekday, this should be sufficient to rest the watch over the weekend, even a holiday weekend. Additionally, the crown is not the screw-down variety, so it’s easy to give it a few turns at any time. 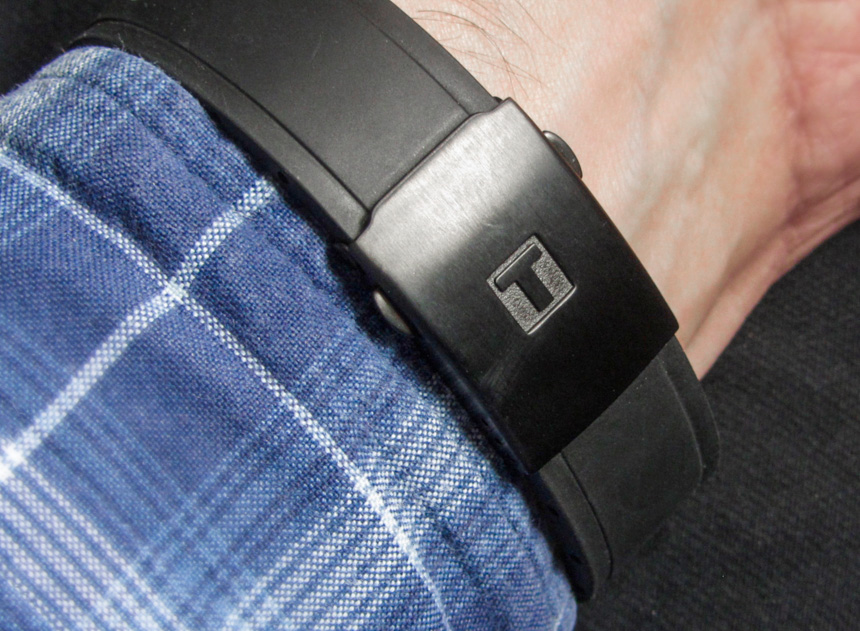 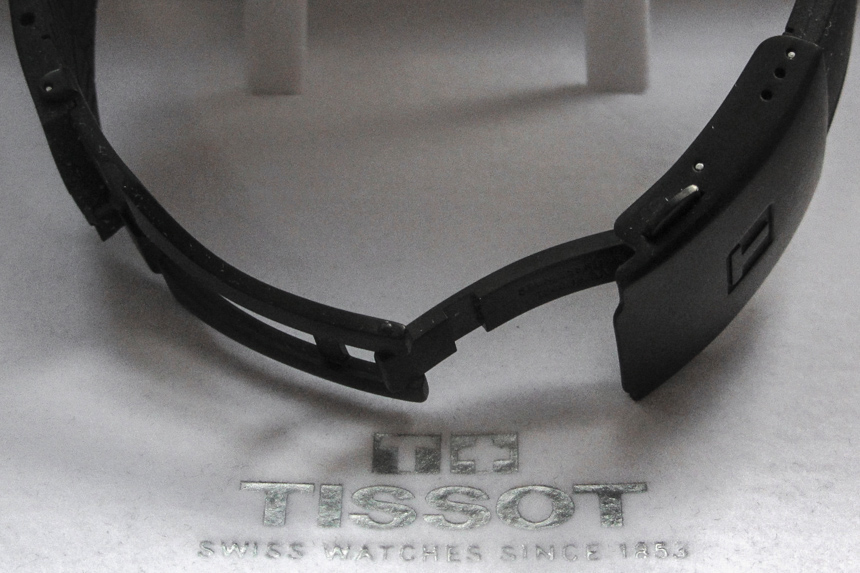 The movement sits under a three-spoke steering-wheel detail, a device that has a long pedigree at Tissot. The anniversary book describes how the designer of the original PR516 devised the perforated steel bracelet and made the connection with sports steering wheels and motorsports in general. Carbon fibre was not yet available, so one way of reducing weight in cars was to drill holes wherever possible.

The archetypal sports steering wheel, often with a wooden rim, was found in racing versions of the E-type Jaguar, Aston Martin DB4, and AC Cobra – and in assorted Ferraris, Maseratis, Alfa Romeos, and others. Drivers found the holes useful for mounting a stopwatch directly in their field of view. Many such cars remain in good shape and may be seen at vintage gatherings, perhaps the ultimate being the Goodwood Revival where hugely valuable classic cars – with very tolerant owners! – line up for some enthusiastic racing at one of motorsport’s spiritual homes.