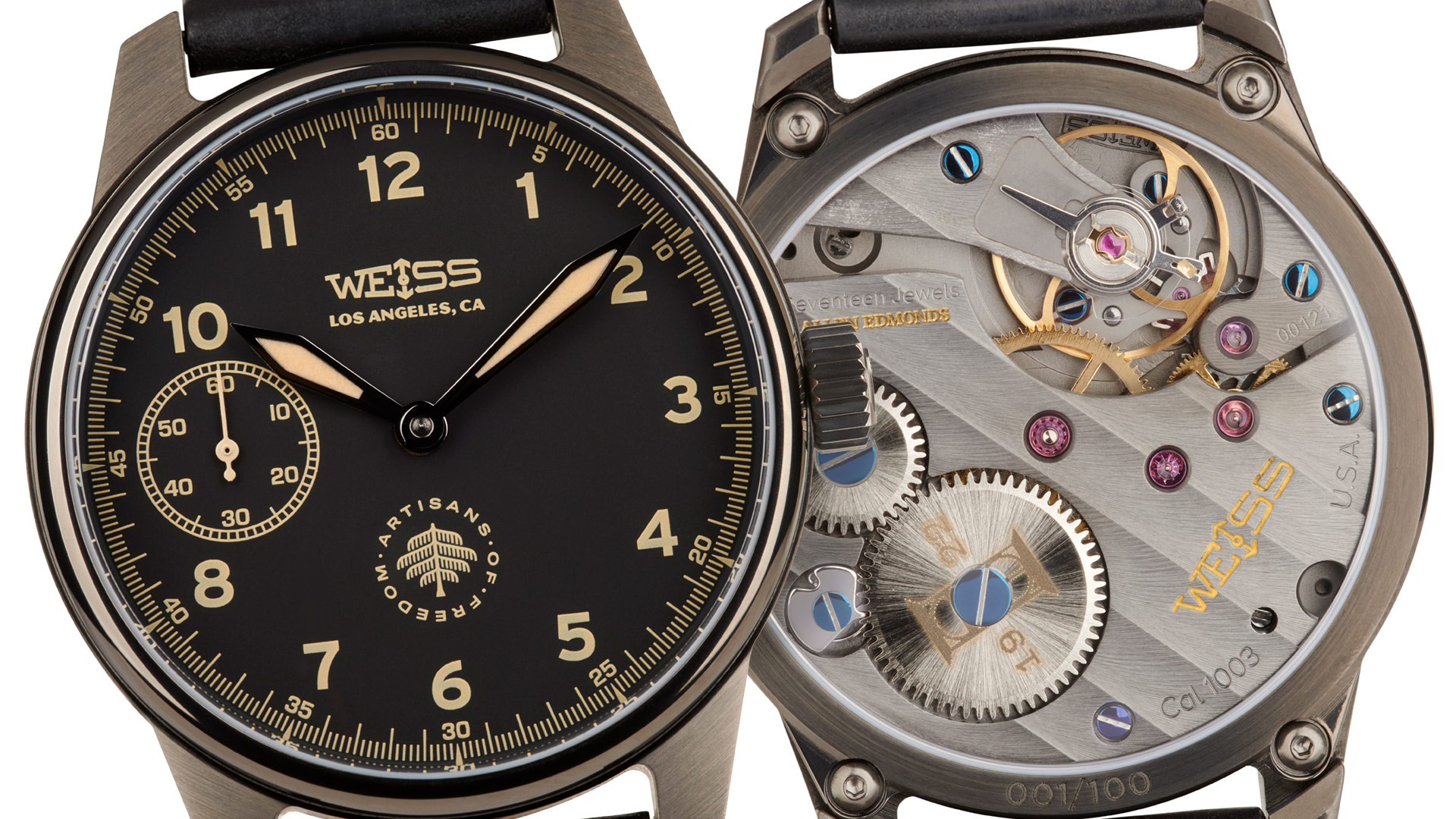 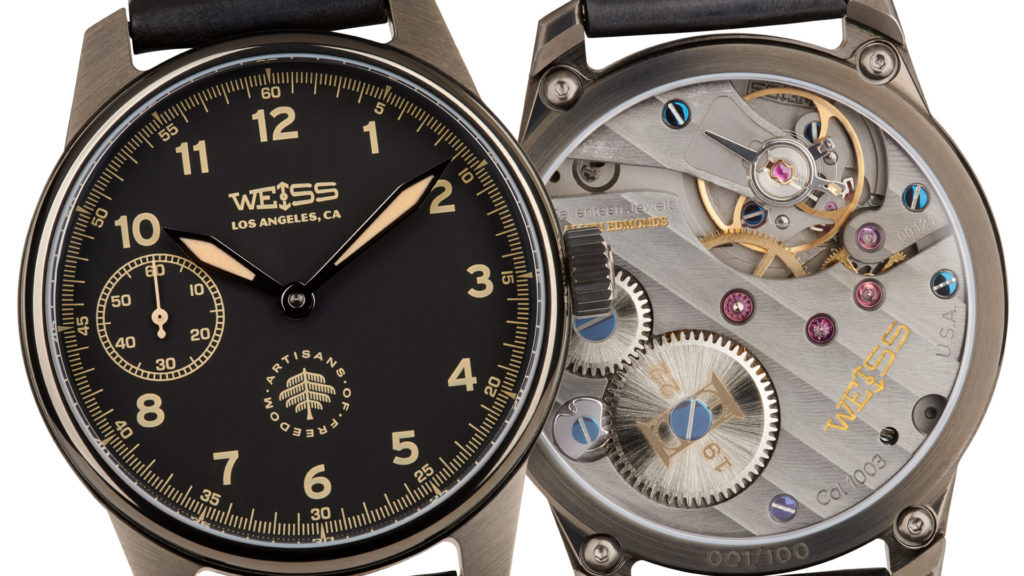 American leather connoisseurs Allen Edmonds have long worked with a community of American craftsmen under its “Artisans of Freedom” program. Artisans of Freedom aims to collaborate and spotlight high-quality, American-made products from around the fashion industry. As a fan of the brand myself (and owner of an embarrassing number of their shoes and belts), I’ve found everything from jackets to handbags, as well as glasses frames to denim through the program. The newest name on the list of Artisans seems like a good match. Allen Edmonds and Weiss Watch Company have teamed up for the all-new Weiss American Issue Field Watch Allen Edmonds Artisans of Freedom Limited Edition (deep breath), a new take on the Weiss American Issue Field Watch. 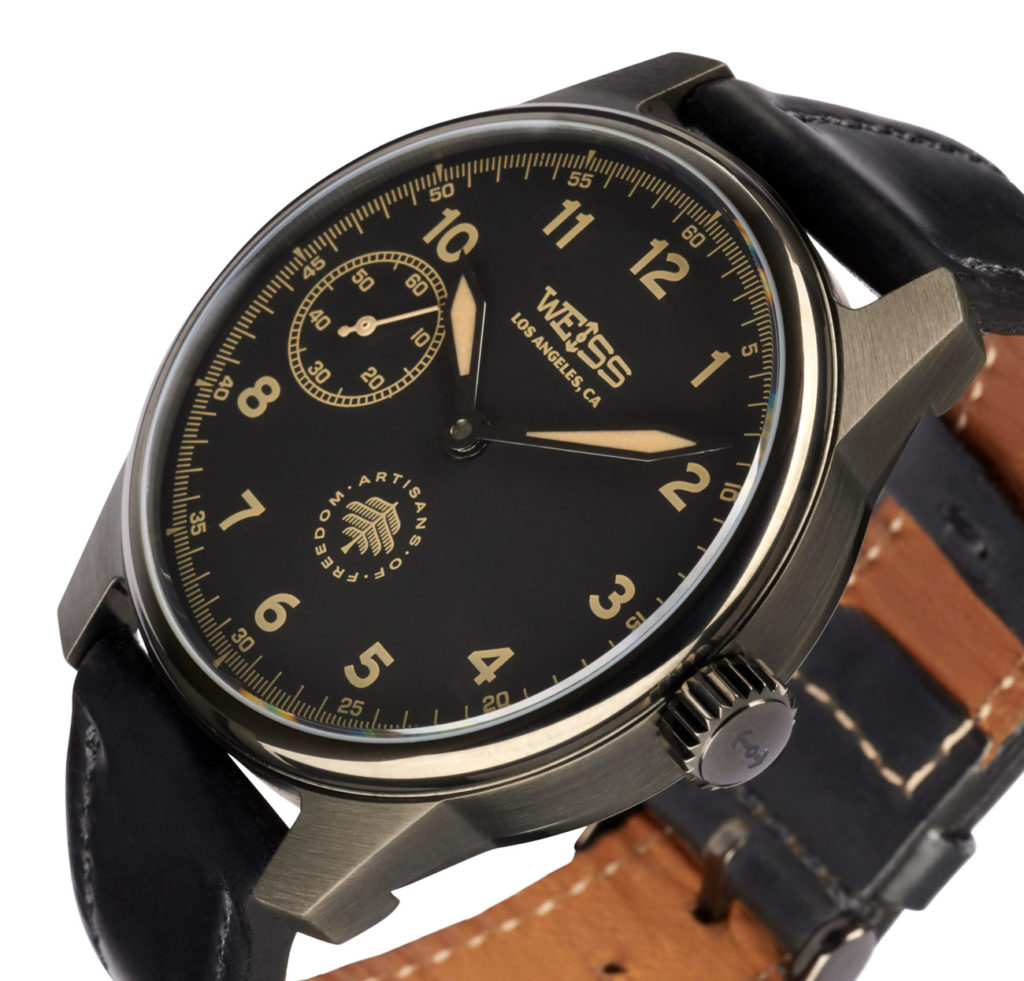 The watch does a good job of channeling the creative direction of both collaborators. Cameron Weiss of Weiss Watch Company has always had a fantastic eye for design, with a strong-suit in simple and easily identifiable watches emphasizing their American-made provenance. The Weiss Special Issue Field Watch reviewed here has remained one of the most functional and affordable “American Made” field watches to date. And when paired with Allen Edmonds’ penchant for what I have come to describe as the brand for “Urban Adventurers,” everything about the resulting watch seems to quintessentially channel the DNA of both brands – even though I often find watch brands collaborating with fashion labels to be a mixed bag. 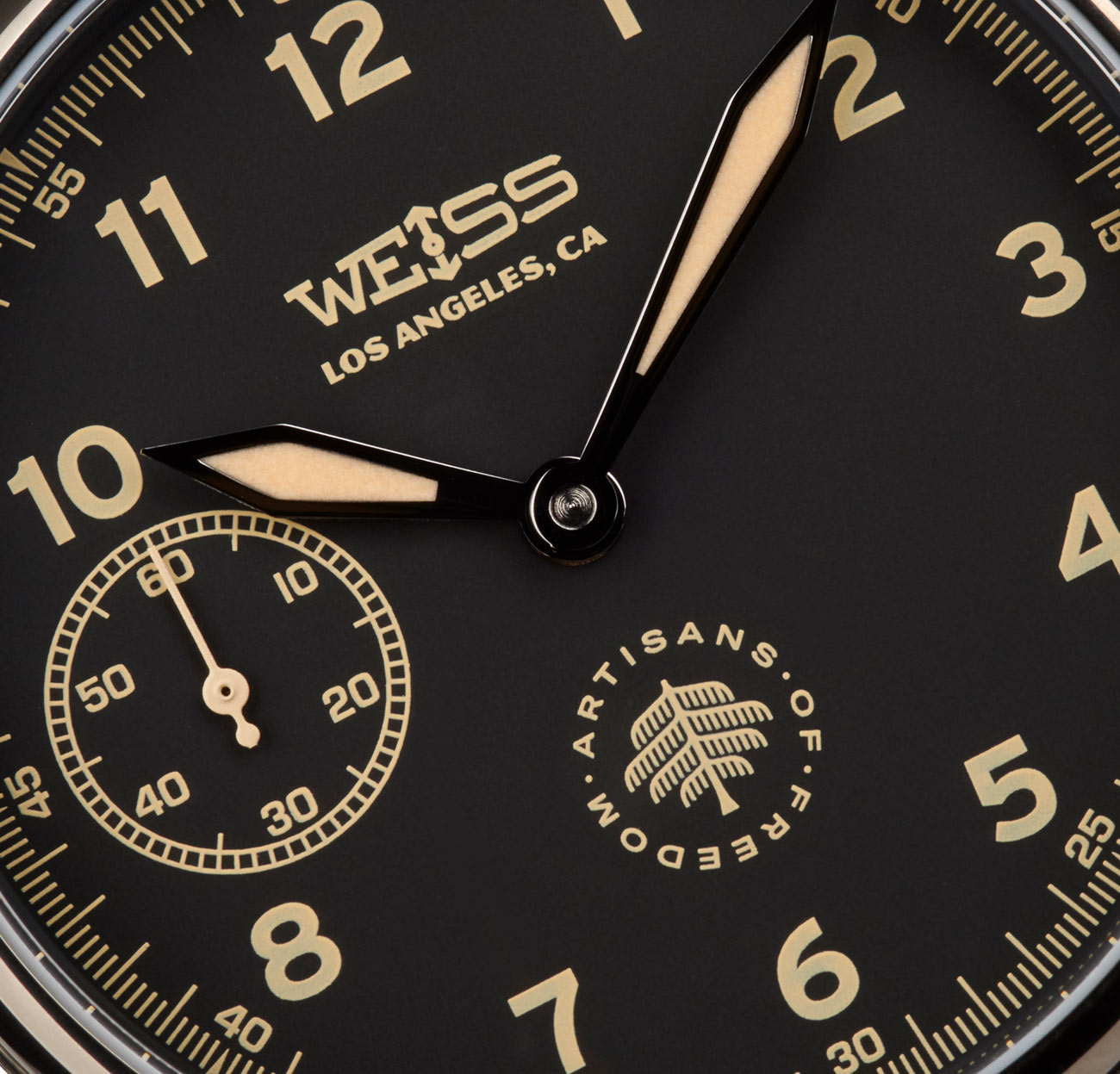 The 100m water-resistant steel case features a DLC coating that gives the watch an almost brass appearance. I actually really enjoy the warm hue of the case, as it’s not quite bronze, but not quite the more familiar black DLC either. The Weiss American Issue Field Watch measures in at a wearable 42mm x 12.8mm, which makes it bigger than most retro military watches, but keeps it versatile in how it can be worn. Like many field watches, the crown is a bit large and squared off, allowing for easier adjustments in the field. The double-domed and beveled sapphire crystal rounds out the case shape and almost gives the dial a floating look, to my eye. 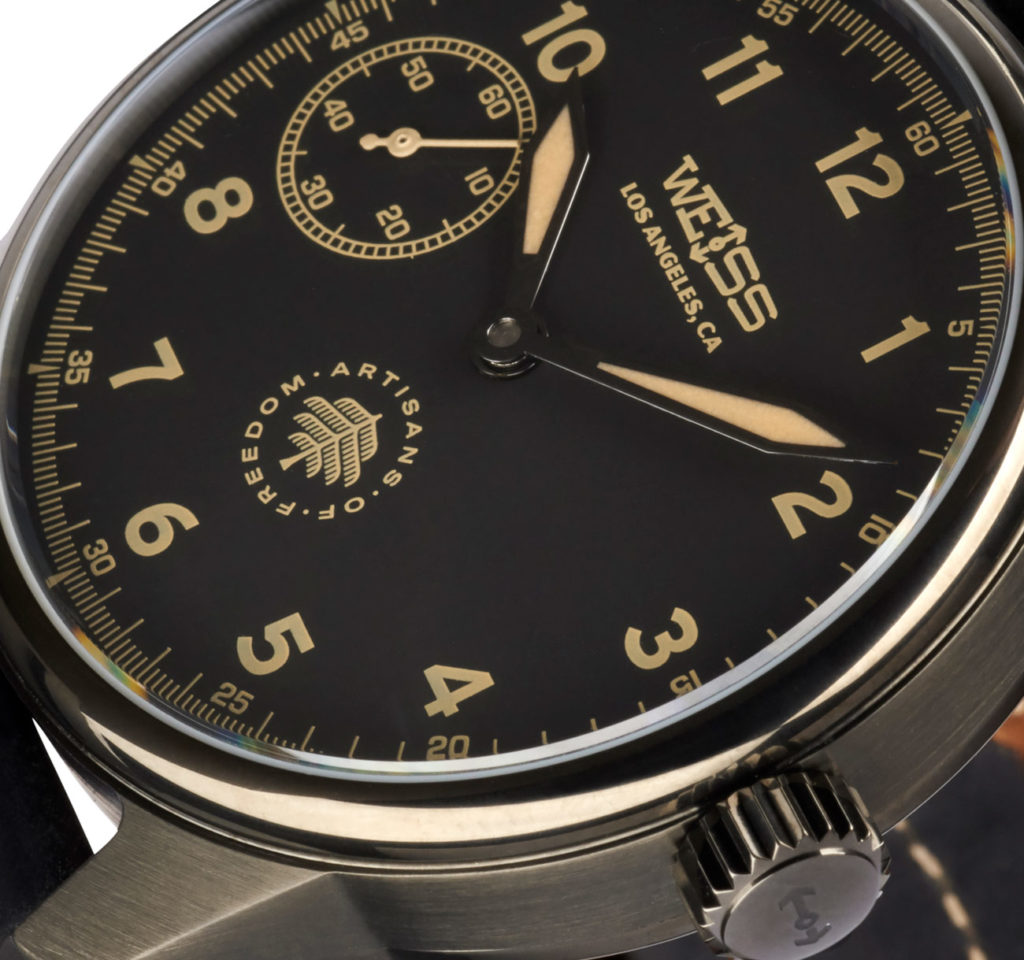 Keeping the practical and utilitarian nature of a field watch, the dark grey dial provides great contrast behind the tan indices. I know that some enthusiasts will think it looks like faux-aged lume, but I think it’s the right choice here and provides a uniformly rugged look to the overall design. The black oxide polished sword hands are filled with matching Super-LumiNova. At the 6 o’clock position sits the Artisans of Freedom logo. 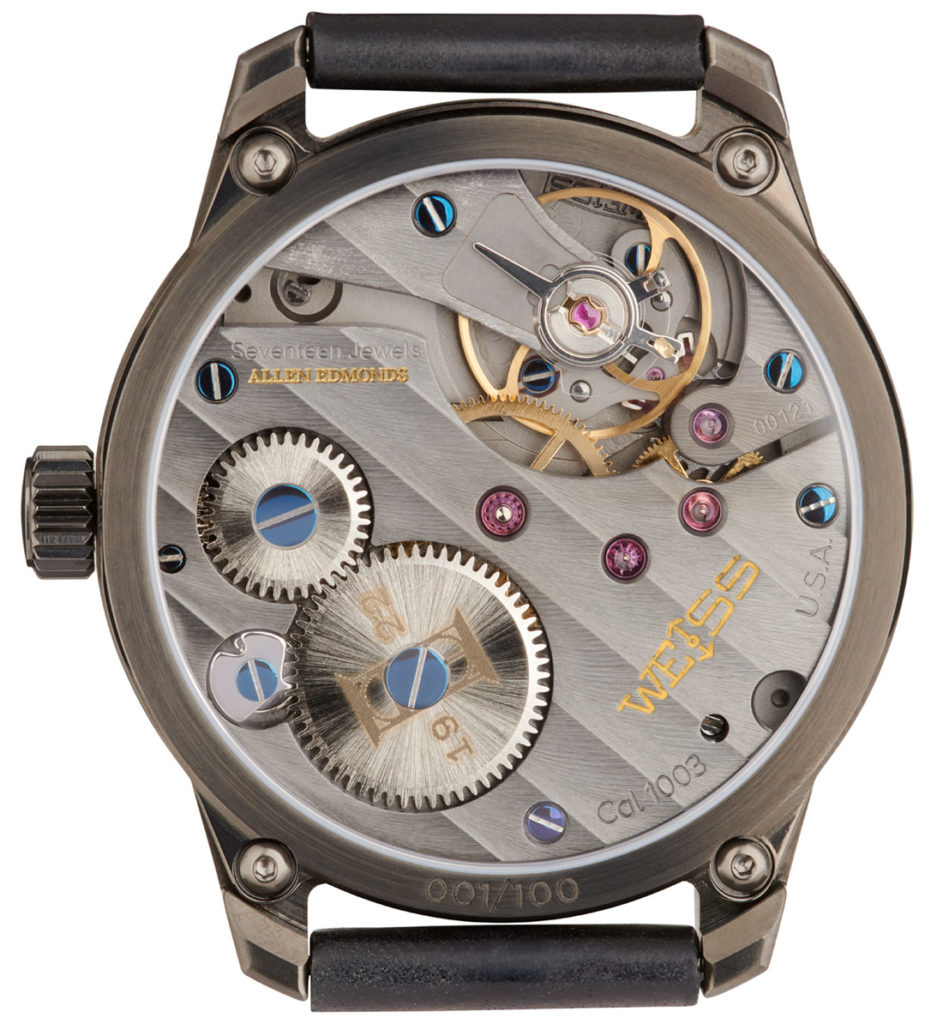 Flipping the watch over, you’ll find the Caliber 1003 movement – a hand-wound movement manufactured in the Weiss studio in Los Angeles using components that are made primarily in the US. We contacted Weiss to get more details on this and according to them everything about this movement is made in the USA expect the movement jewels (synthetic ruby), hairspring, mainspring, and the hands which are on the dial. The movement is well-decorated with Geneva striping across the plate and bridges, and it is the only place you’ll see Allen Edmonds branding on the watch itself. At the top of the mainplate is ‘Allen Edmonds’ and etched into the barrel is an hourglass and ‘1922,’ the year Allen Edmonds was founded. The movement operates at 21,600 bph (3Hz) and features a 46-hour power reserve and hacking. 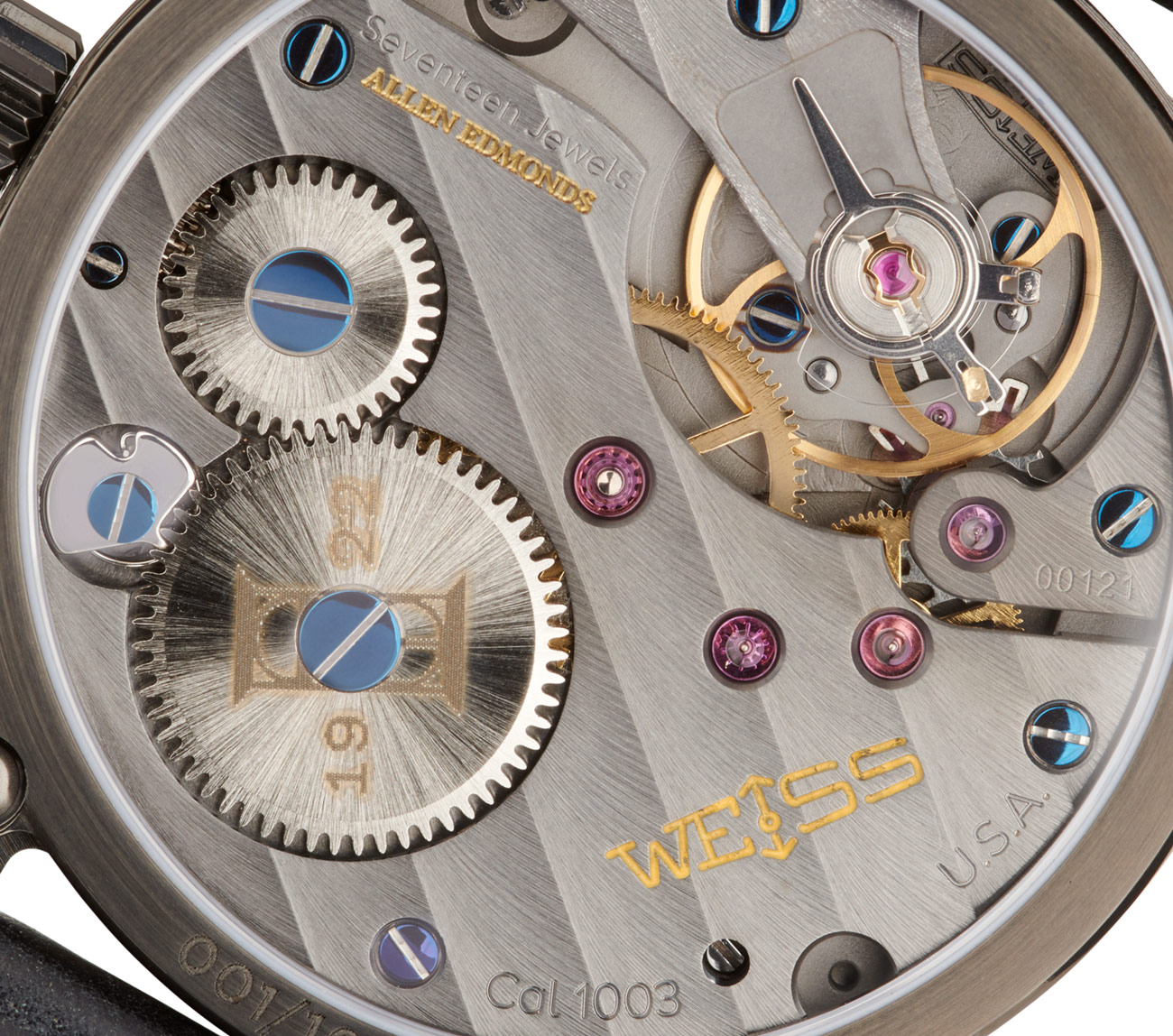 In keeping in line with the Allen Edmonds mission of using only high-quality materials, the watch comes standard on a black leather strap from Horween, another American brand. It ties the rest of the watch’s features together nicely while further expanding on the Allen Edmonds footprint without being in-your-face about it. Additionally, the watch comes standard with a second brown leather strap – it isn’t specified whether it’s also Horween, but this adds a little to the value proposition. 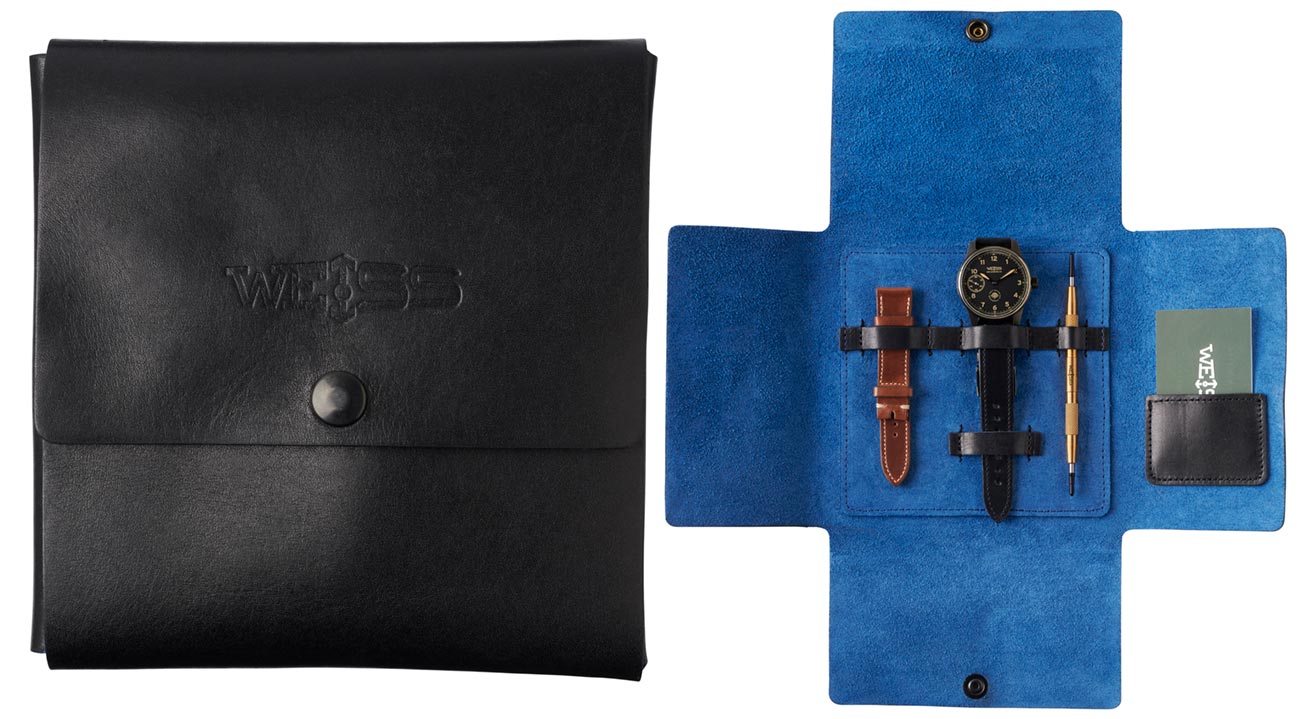 The Weiss American Issue Field Watch Allen Edmonds edition does a good job of marrying vintage and modern aesthetics, something that many often fail at pulling off, let alone in a collaboration. For a collaboration piece, it looks very authentic to both brands – right down to the leather pouch it’s packaged in, and that’s a big accomplishment in my eyes. I can’t say that I’ve been the biggest follower of Weiss watches, but as an avid fan of Allen Edmonds, I grew to learn about Weiss through my interest in the American Issue Field Watch – and that’s arguably what the Artisans of Freedom program and this type of collaboration in general aim to do. So, kudos to both brands for not only a well-thought-out watch, but also their decision to partner together in creating it. I hope to see more such collaborations in the future. 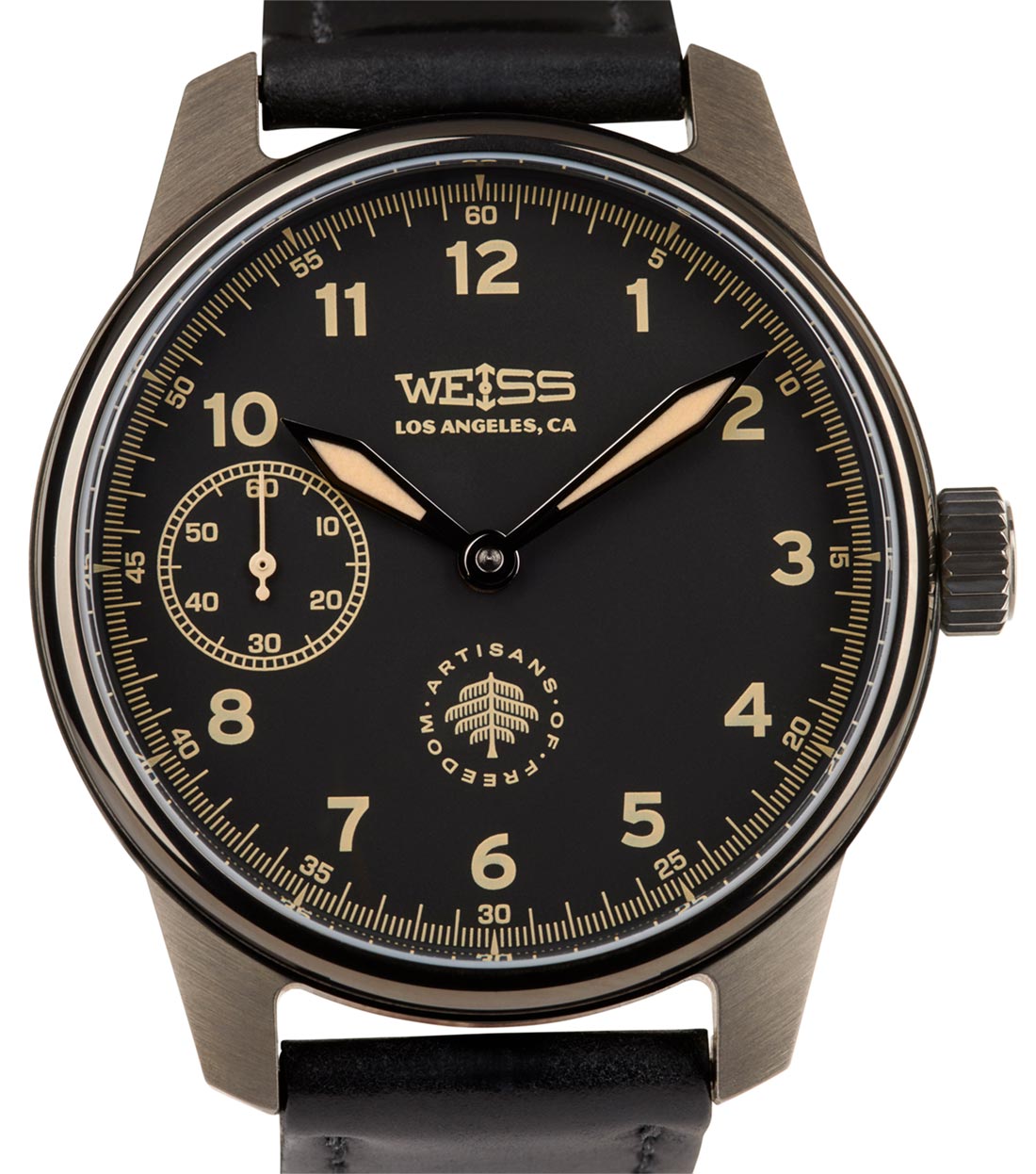 The Weiss American Issue Field Watch Allen Edmonds Artisans Of Freedom Limited Edition comes packaged in a cool black leather pouch that features the watch, a secondary brown leather strap, and a strap changing tool. The watch will be available through the Allen Edmonds website or select stores, and it is priced at $2,195. Visit weisswatchcompany.com to learn more.