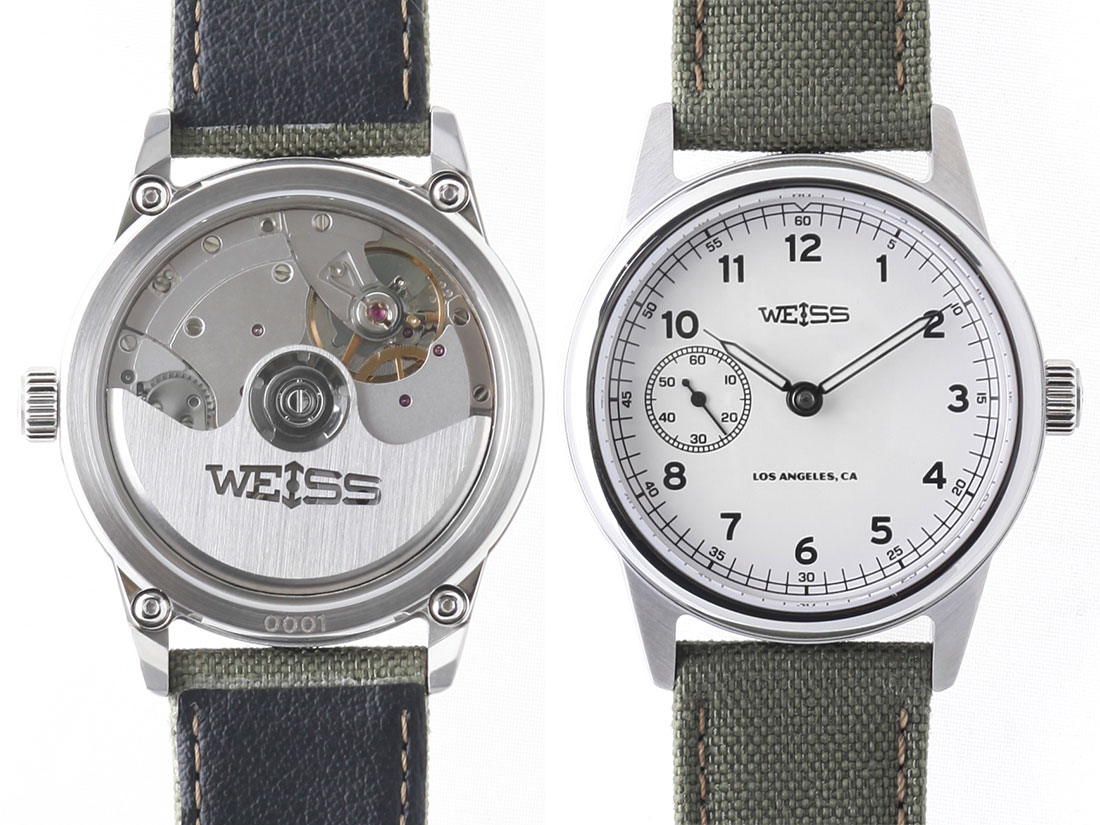 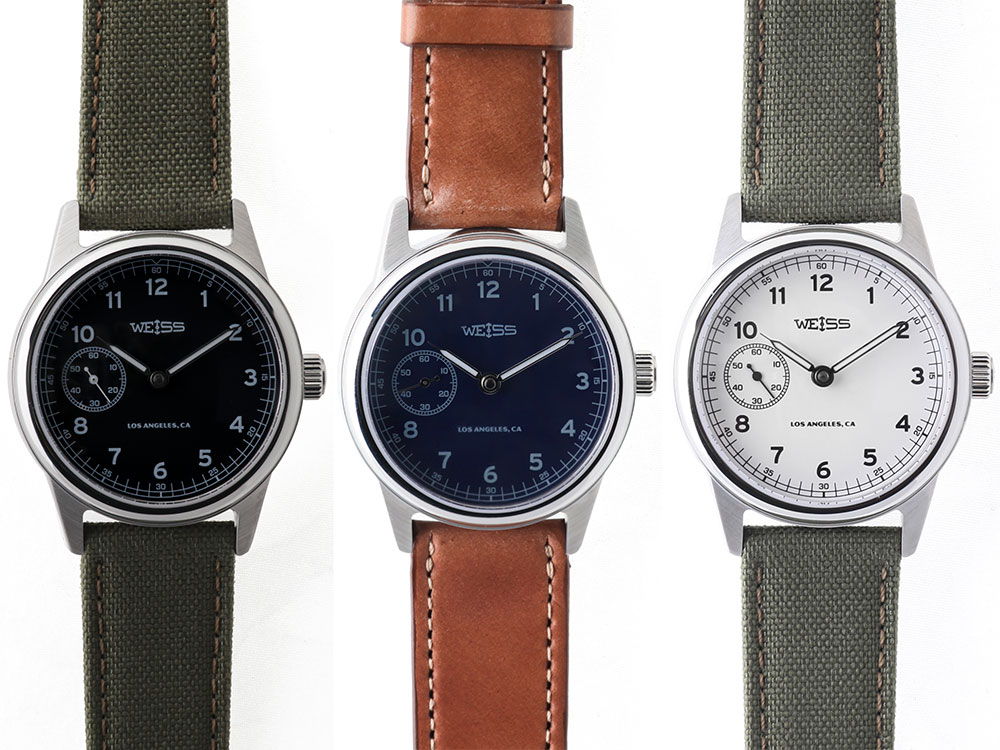 Weiss Watch Company, one of the unfortunately too few American watch companies, was founded in 2013 in Los Angeles, CA, by watchmaker Cameron Weiss. From their initial offering, a 42mm manual-wind watch known as the Weiss Standard Issue Field watch, to their latest release, Weiss have strived to produce watches which are progressively more American. Following in this mission, Weiss have just released the 38mm Automatic Issue Field Watch, the brand’s first foray into automatic watches and yet another piece which is assembled entirely in the brand’s Los Angeles, CA, headquarters using Swiss and American parts. Weiss has previously offered pretty compelling value propositions, but it seems that pushing for more and more American-made parts has also pushed the price up. 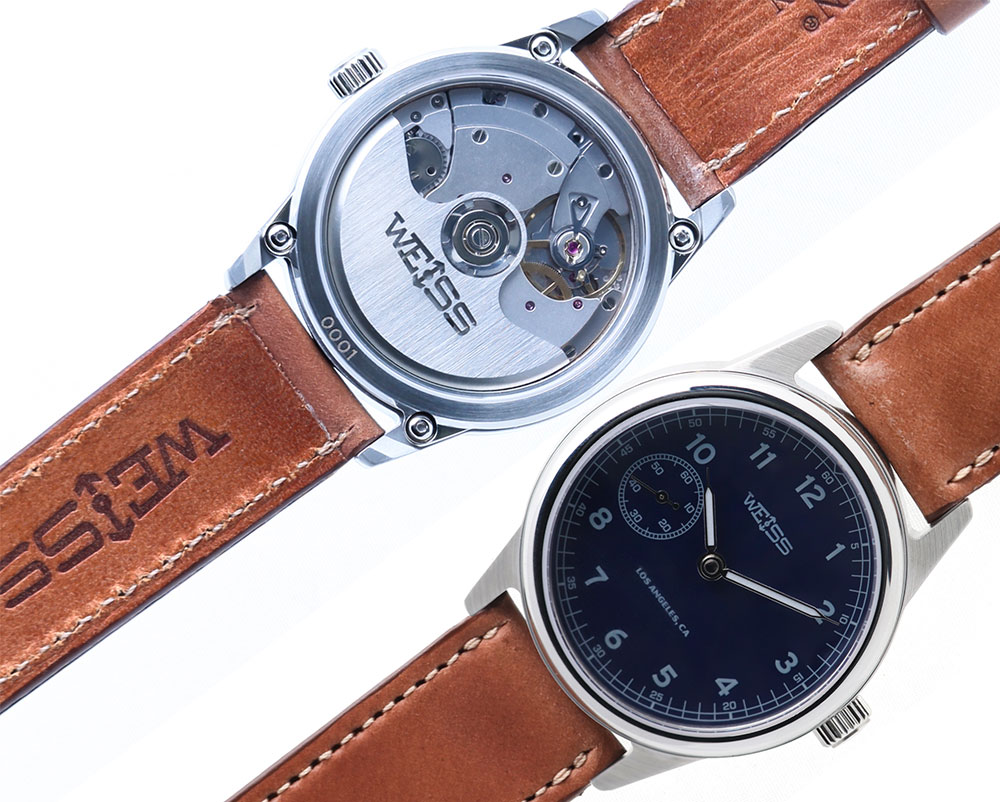 Looking at the new model, the most obvious change is the size of the case, coming in at 38mm (not including the crown) which is down from the brand’s previous offerings which have all been 42mm in width. In addition to a smaller case, the Weiss Automatic Issue Field watch also features a new movement for the brand. The Cal 2100, which is based on the Swiss Eterna Caliber 39, is produced from over 150 Swiss parts as well as American components and is assembled and decorated by Weiss in the United States. The new movement is a time-only, self-winding, 28,800 beats/hour, hacking, Incabloc-protected caliber with 65 hours of power reserve. 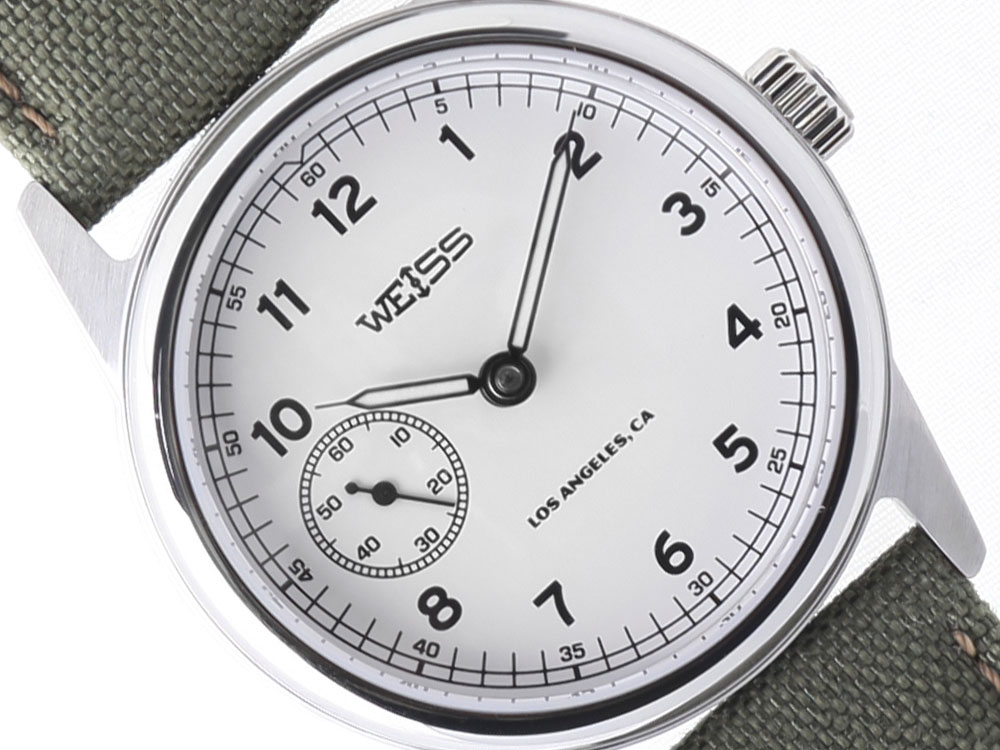 In terms of styling, the new watch is pretty similar in design to all of Weiss’s pieces. The straightforward time only design with a seconds sub-dial at nine o’clock and a fairly standard field watch dial and hands make for a highly legible setup which the brand has stuck to through their various iterations. The hands, which are a narrower but still vintage-inspired set, are also new and different from previous models and still sport Super-LumiNova. The watch comes with a familiar olive green 20mm Cordura strap to complete the pseudo military look. 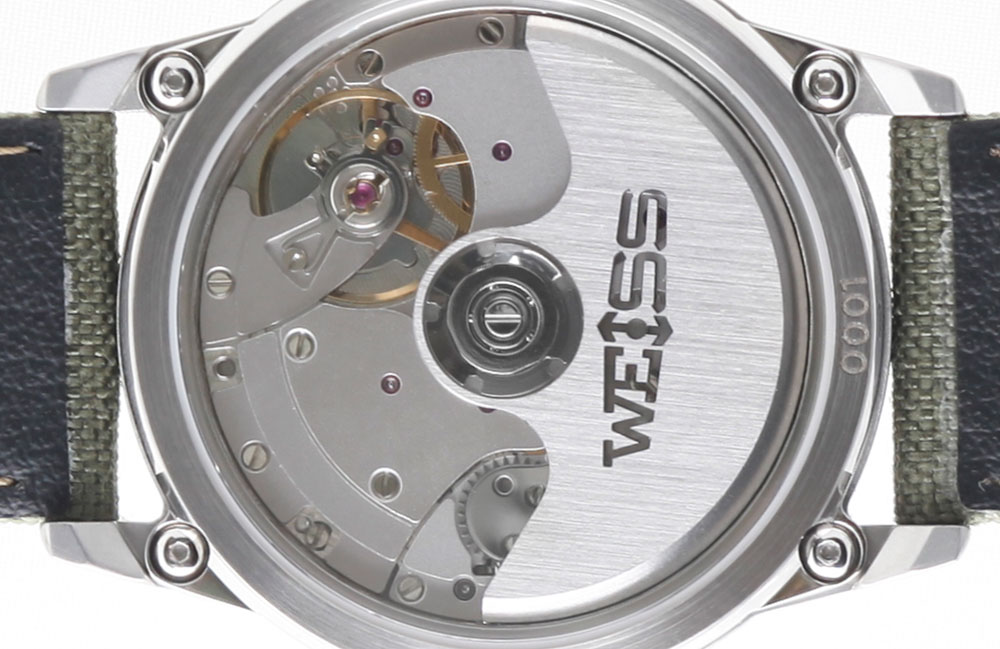 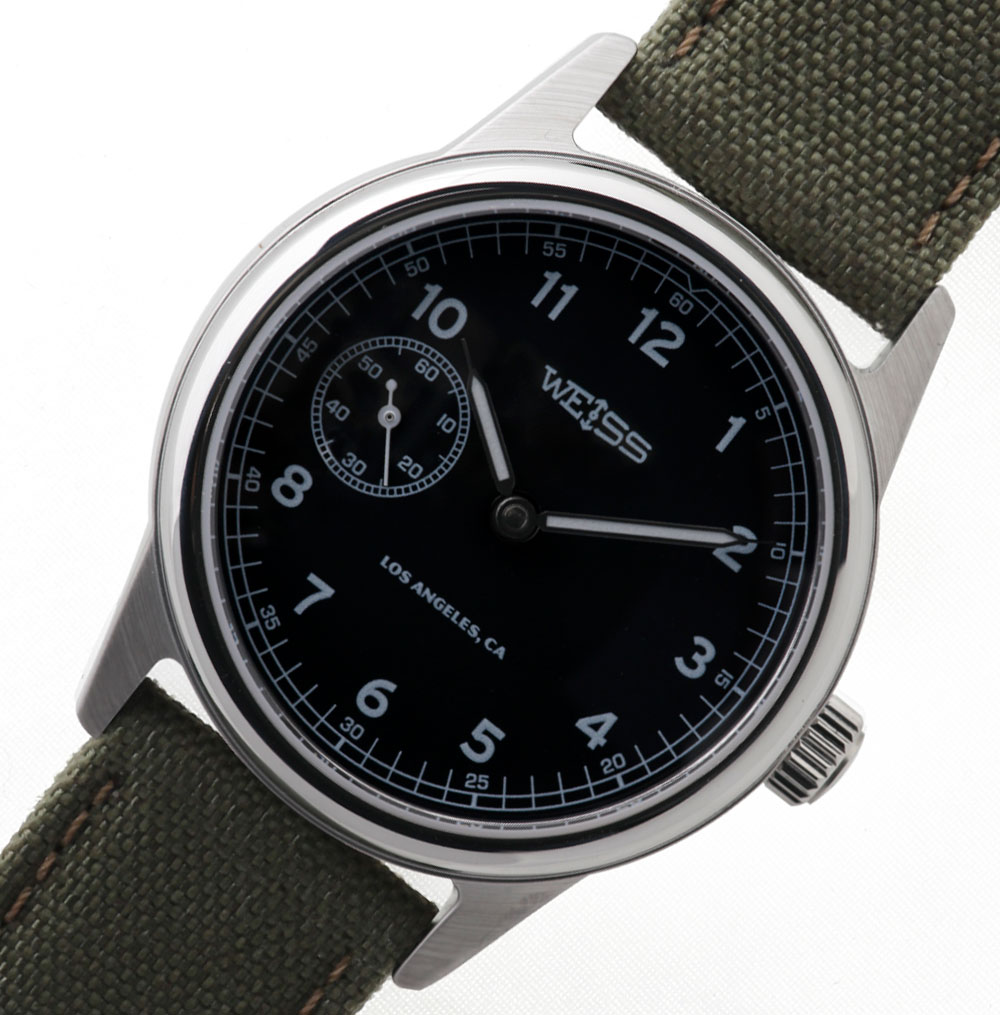 In all, this is an interesting update to the Weiss range. The change to a 38mm size may make the watch more suitable for those with smaller wrists (and maybe even ladies) or people who prefer a more vintage look. The new automatic movement also provides a useful update for fans of the maker who aren’t interesting in winding their watch every couple of days. With their new movement, Weiss are continuing to challenge what it means to be “American made.” aBlogtoWatch contributor Aaron Stark wrote an article on his Watch Ponder blog here discussing Weiss and what American-made means in greater depth.

While the movement is completely assembled, decorated, adjusted, and cased here in the United States, the inclusion of a majority of Swiss components prevents the “Made in the USA” label from being applied because it requires “all or virtually all” of a product’s components to be American. However, this new Weiss Automatic Issue Field watch represents a further step in the right direction for American watch making, and Weiss is certainly offering the most USA-made watches available for the price. 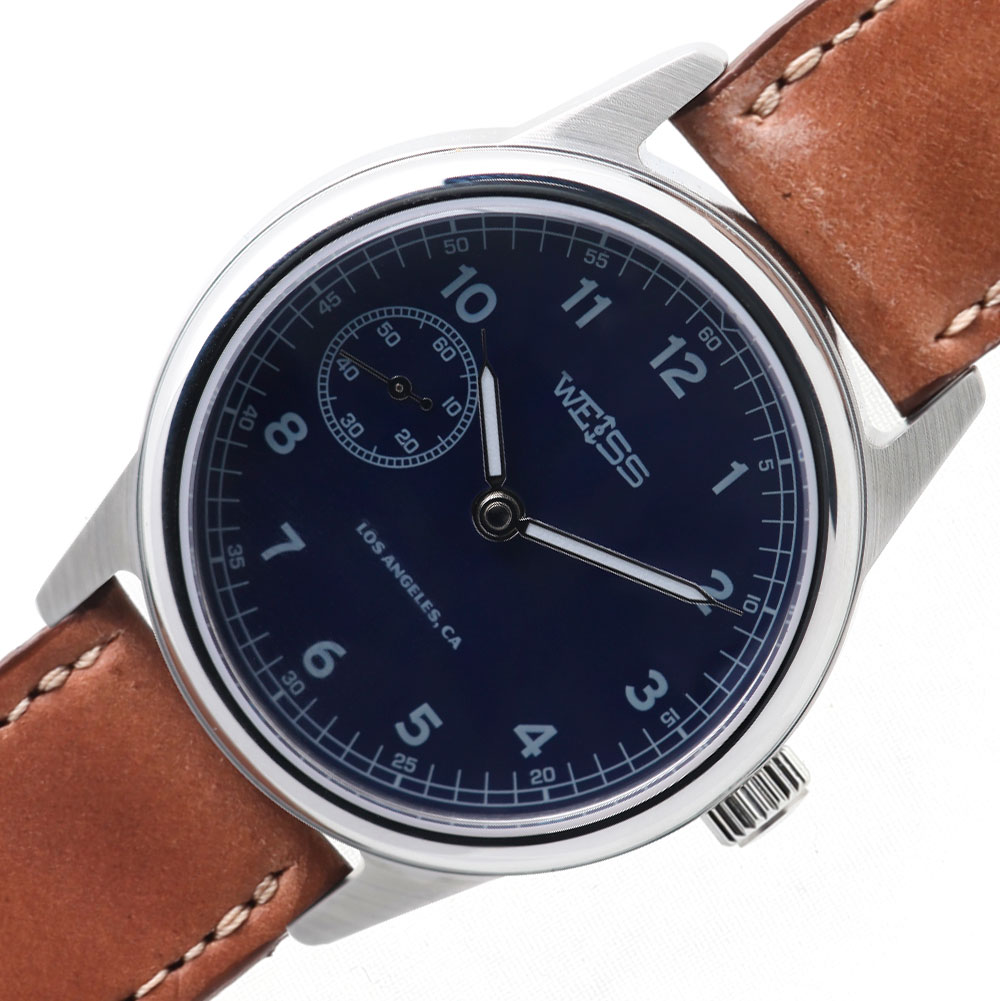 The Weiss Automatic Issue Field Watch is available in three distinct colors – white or black dial with a green Cordura canvas strap retailing at $1,850, and a new blue dial with natural Horween Shell Cordovan strap retailing for $1,995. Again, that might seem like a lot of money but you’ve got to pay a premium for American-made these days. weisswatchcompany.com