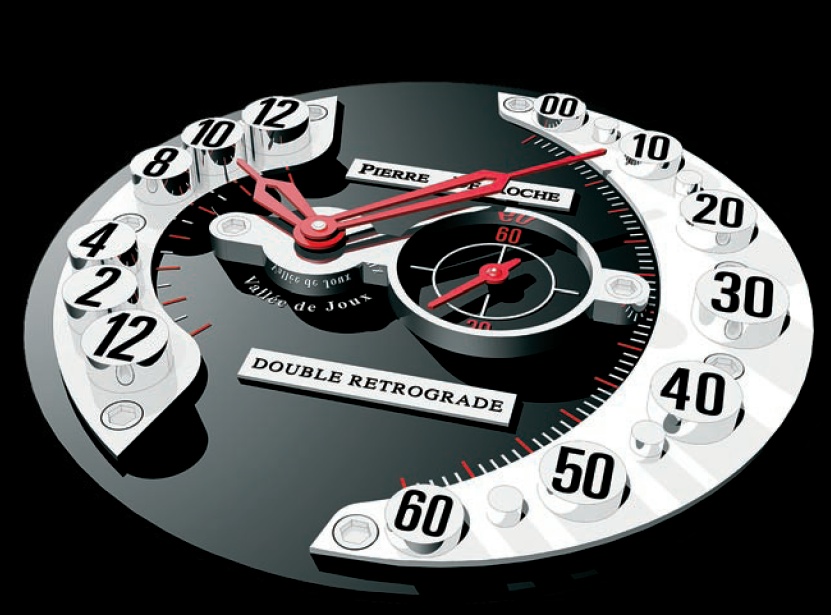 I have to applaud a new brand that releases relatively sober and legible timepieces. The Double Retrograde from the new Swiss watch brand Pierre DeRoche is an obvious “homage” to Gerald Genta, but well done nonetheless; making for a legible watch that strays from the norm.

A retrograde watch is one that has a hand that moves along a liner arc. Once it reaches the end of that arc, it simply jumps back to the beginning position. This is as opposed to traditional cyclical nature of watch hands. Retrograde hands are often used to emulate gauge meters, but can serve a very good purpose when it comes to legibility. Being a new twist on analog time telling, a double retrograde would have two such retrograde hands. According the Pierre DeRoche double retrograde have one hand for the hours and another for the minutes. It maintains a traditional cyclical subsidiary dial for the seconds.

The Double Retrograde is powered by a Dubois Depraz automatic mechanical movement (one of the fancier names in watch making). Pierre DeRoche boasts that they use materials and finished often saved for movements on the dials of their watches. This give them more of an industrial look, but nothing can remove the designer quality of this timepiece.

Available in handful of color choices (and with diamonds) the Double Retrograde is likely to be one of Pierre DeRoche’s more memorable timepieces, although I seriously doubt it will be priced to be a bargain Gerald Genta (quite likely the opposite). Look for them soon at your continental Pierre DeRoche boutique or similarly rare store.