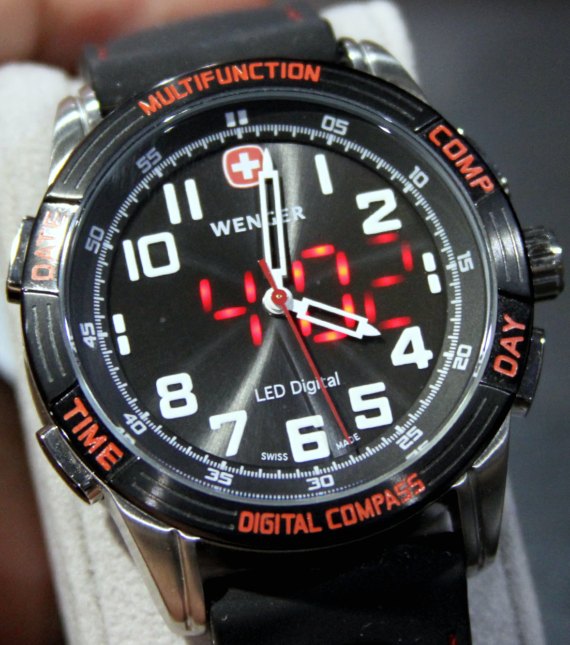 Wenger showed me this pretty interesting gadget style watch that has an analog display, and a “stealth” LED display in the dial. It is their Nomad LED Compass watch, and has some interesting appeal. The basic watch without using the function is easy to read thanks to the large Arabic numerals and hands – both lume covered. The text around the dial might look a bit excessive, but makes it easy to understand what the watch does.  In addition to the time, it has a basic calendar display and a compass. 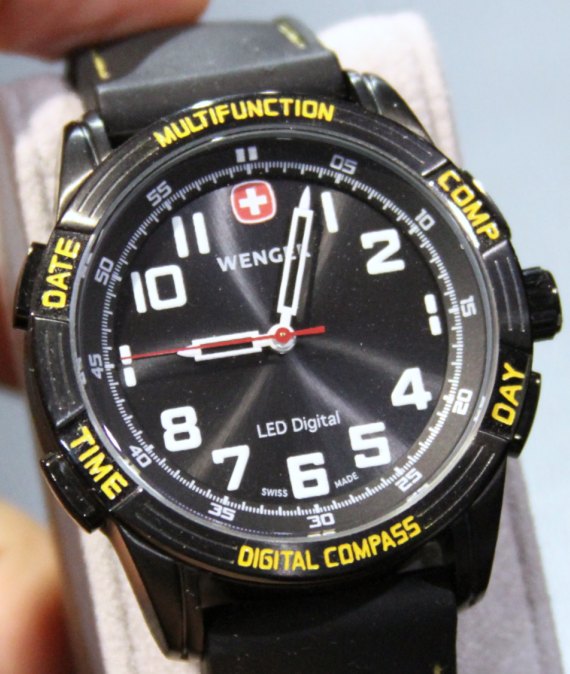 I believe that by pressing the “time” pusher it will show you the time via LED numbers. Not sure if that means you can have a second timezone there, but by default it shows the displayed time on the analog dial in digital form. There is a large PDF manual for the Nomad LED Compass watch on Wegner’s website that you can check out to learn all you like about the timepiece’s small details. When you press the “Day” or “Date” pushers you get to see that information on the dial. With LED displays, it is always ‘info on demand.” Due to the power drain of the lights, they only show up if you press the pushers. The same thing goes for the compass – which is likely the more gadgety part of the watch. Press the compass pusher and you’ll get the compass degrees on the dial, based on where the top of the watch is pointed.

The watch case is 43mm wide in steel. The version with the red text around the dial comes in a polished steel case, while two other versions (with yellow or green text) are also available. Those other two versions come in PVD black coated cases. All versions have black bezels though. Interestingly enough, the LED color in this version is red, but in the other two versions are green (which is rather neat). 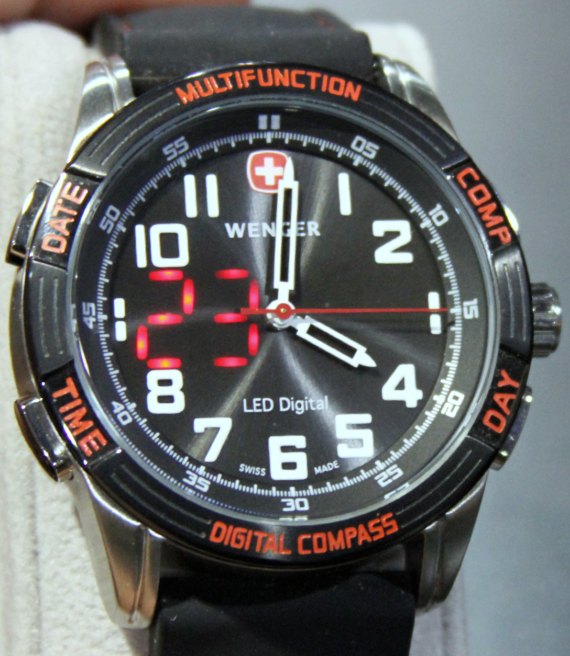 In the watch is a specially designed Swiss quartz movement, and the case is water resistant to 100 meters. Crystal is mineral, but has that sapphire crystal “coating” that seems popular these days (actually, newer versions of the watch have the sapphire coated crystal, but some older ones might not). The strap is silicone, and has contrast stitching to match the color scheme of the dial. There are also versions available on metal bracelets. Overall the Nomad LED Compass watch ain’t half bad. It has a certain nostalgic “camper” quality to it, and the information layout is really straight forward. Some people get intimidated by the complex functions of say… a Casio Pathfinder, so it is nice to have techie timepieces like this that won’t require an expedition through the user manual first. While the Nomad LED Compass won’t do as much as a Casio Pathfinder, it does have a more classic look about it, an analog face, and Swiss character. Price for the red version with the polished steel case is $375, while the PVD coated models are a bit more at $400. Less online in many places, but you can buy direct from Wenger’s website.