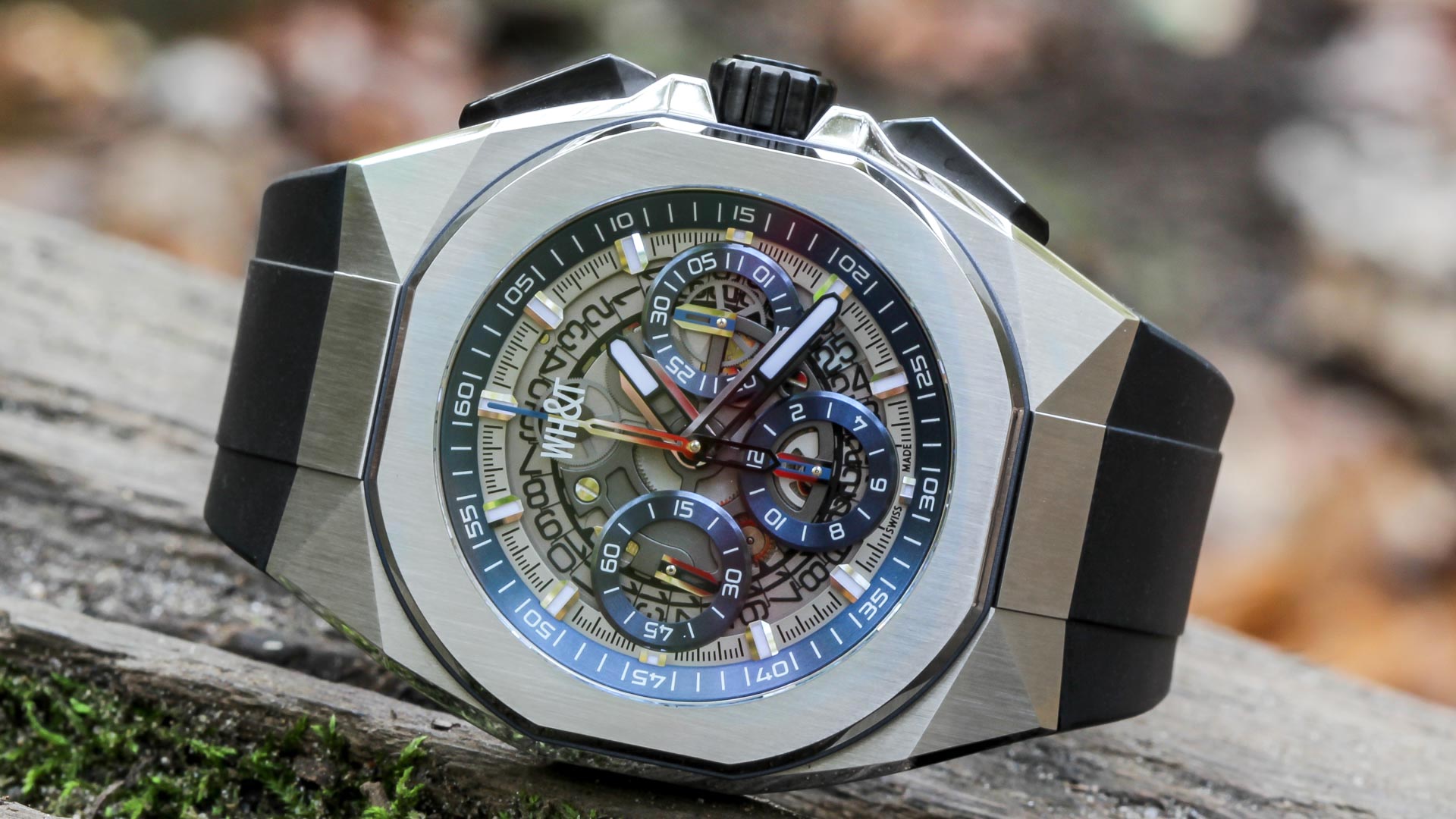 My first encounter with the Wild Horologists & Team LCF888 watch was via an email blast notifying me of a new release. Initially, I took the news as nothing more than a bog-standard press notification and was about to file it away for coverage at a later date when something caught my eye. Leaping out from the page were two words that piqued my interest: “school watch.” 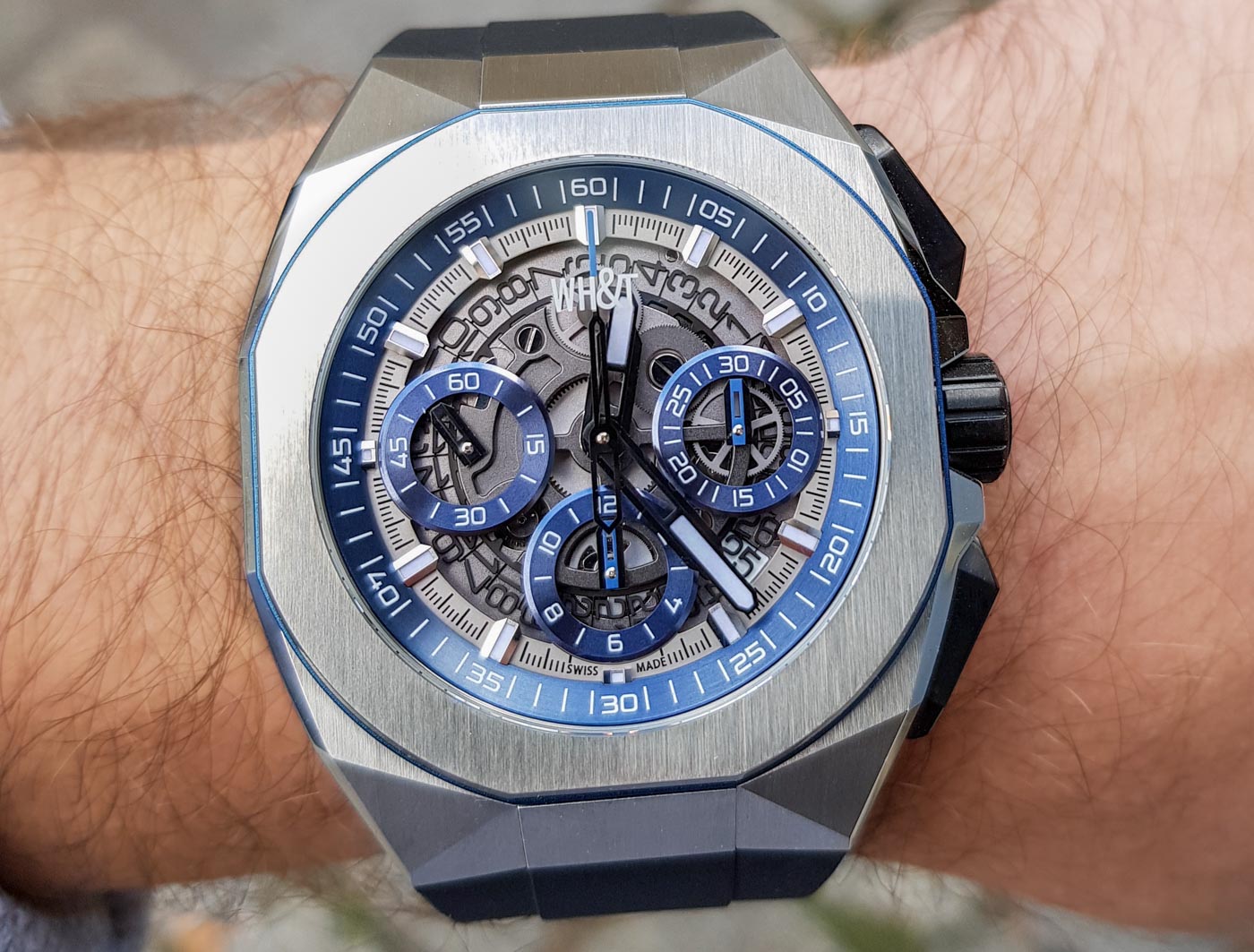 I went back and took another look at the lead image. It didn’t seem to correlate with the description of a school watch. It was too slick, too polished, too professional. As a former watchmaking apprentice, I’ve had firsthand experience in producing a school watch as part of my training. While the end products of such endeavors tend to be quite impressive when appreciated in context, they generally look nothing like the WH&T LCF888. Most students’ imaginations are limited by available materials, tooling, and, crucially for this project, contacts. 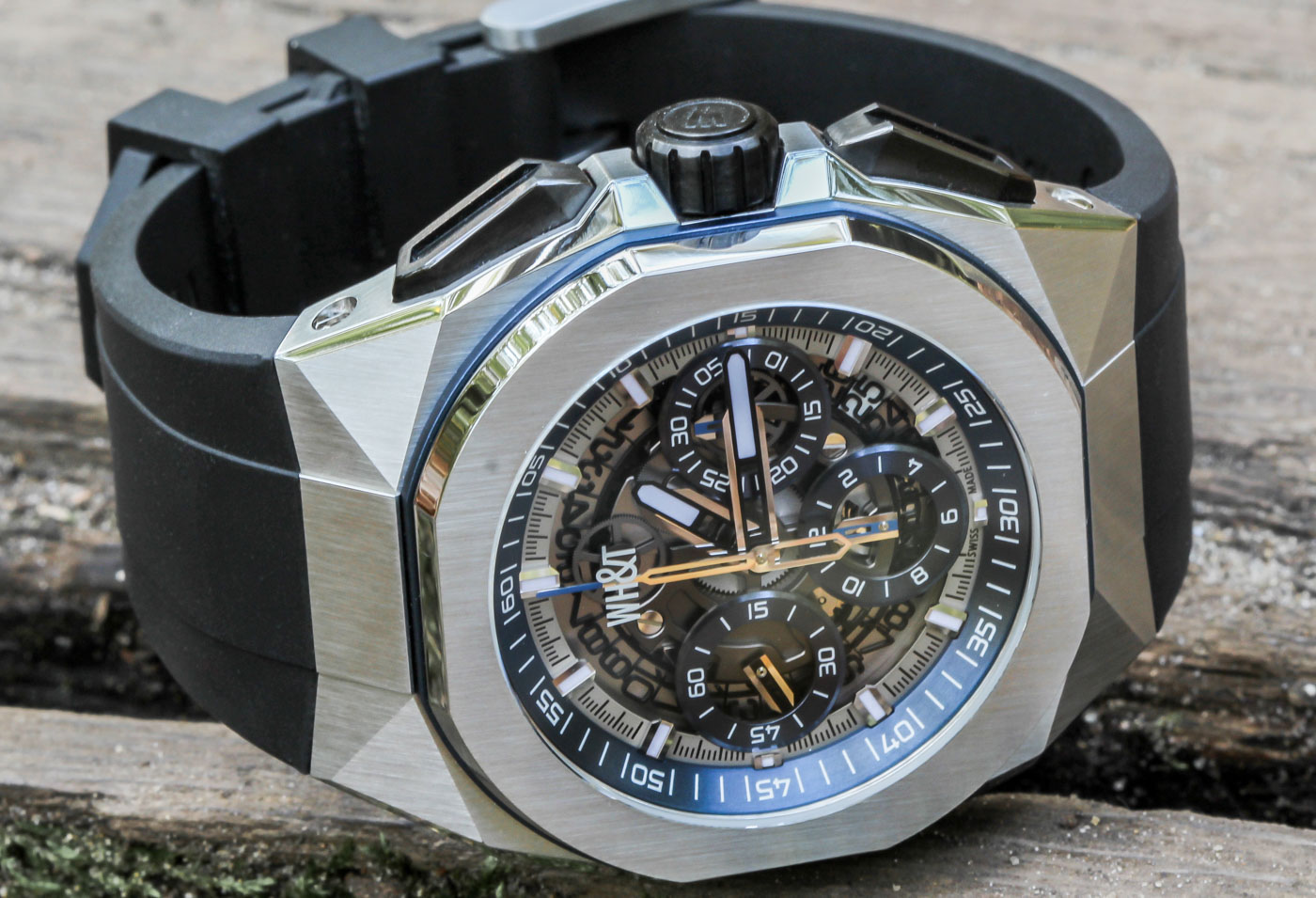 When you’re starting out in the world of watchmaking, especially if you’re trying to carve a career for yourself at the bench, you’re unlikely to know many people in the industry — certainly not the kind of people you need to know to mobilize 15 separate high-end manufacturers to help in the production of a school project. Given that it is exactly what’s happened here, I thought more investigation was necessary. 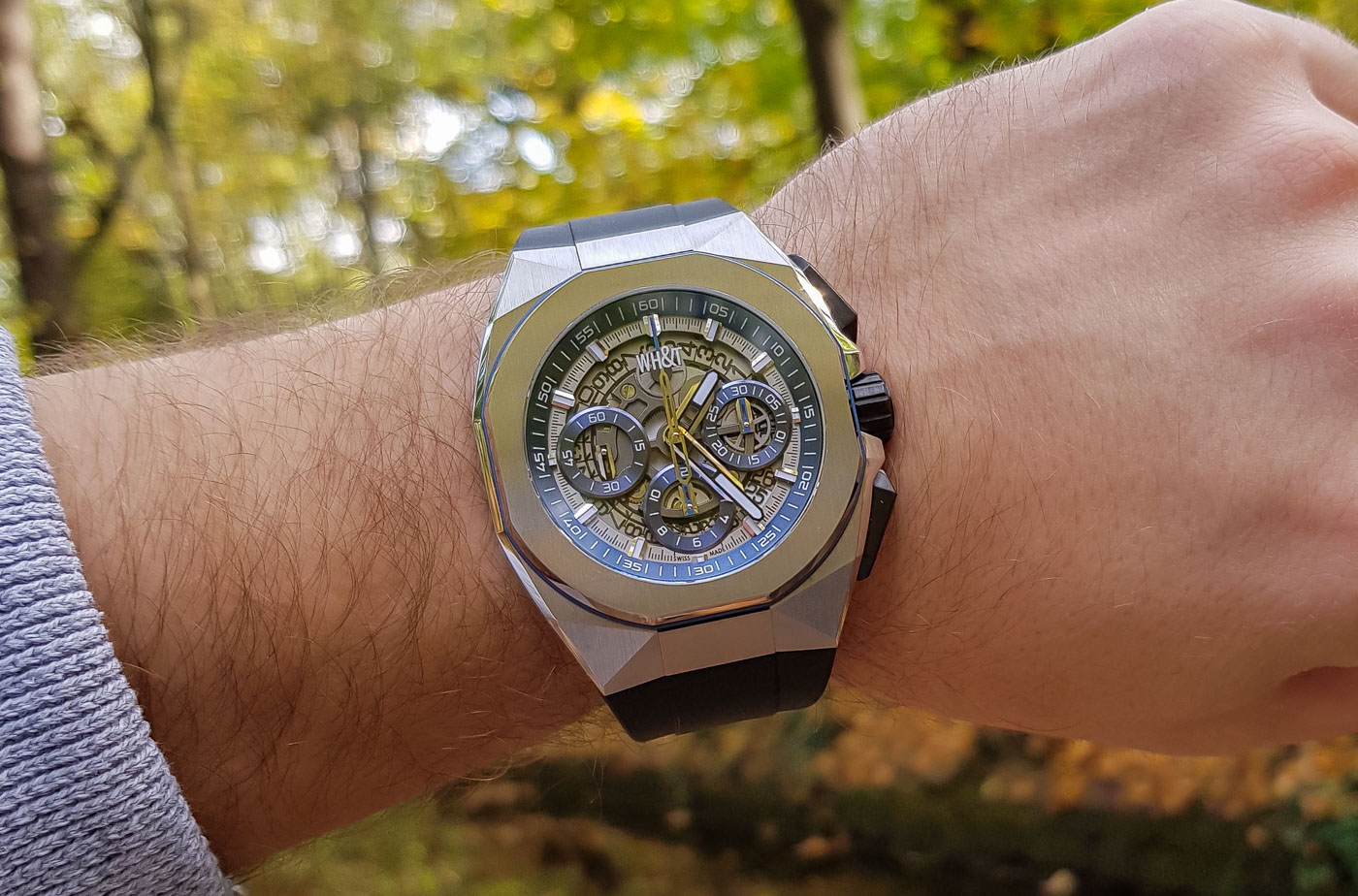 Wild Horologists & Team is a unique conglomeration of private educational facility tutors, students, and established industry suppliers. The project was conceived as a way to give the students of an advanced training school in La Chaux-de-Fonds the chance to take a watch from concept to creation, exposing them to a raft of techniques, necessary processes, and logistical hurdles any brand or individual would face when trying to bring a new watch to market. 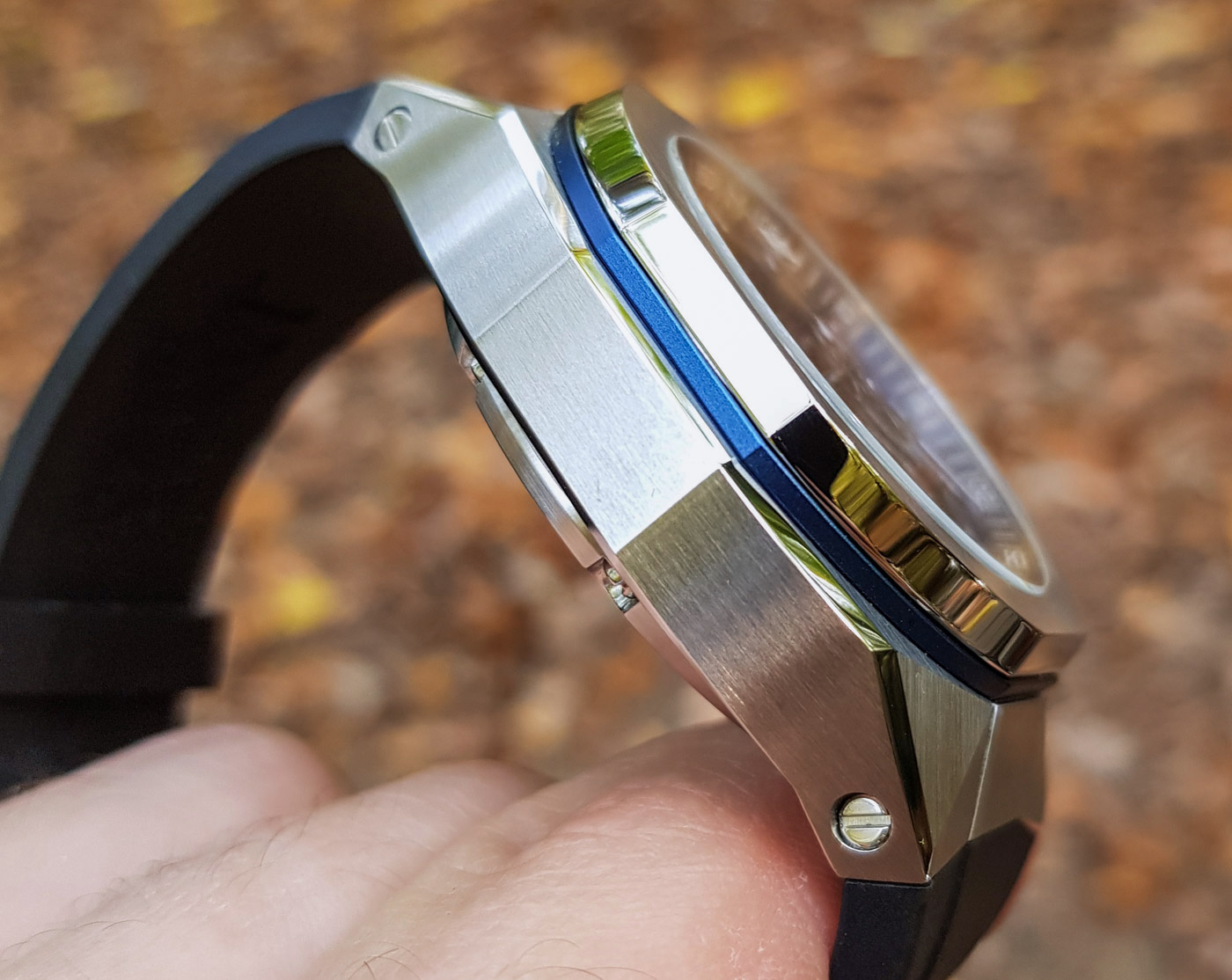 In an age in which many new brands talk about transparency in an attempt to convince potential purchasers that they are not being fleeced by ridiculous margins, WH&T still manages to offer incredible value when stacked up against brands utilizing that strategy. Asking how this is possible won’t really illuminate the difference between this project and others (because, theoretically, any project could run with such tight margins). The best way to make sense of the pricing structure is to ask why WH&T is doing this. 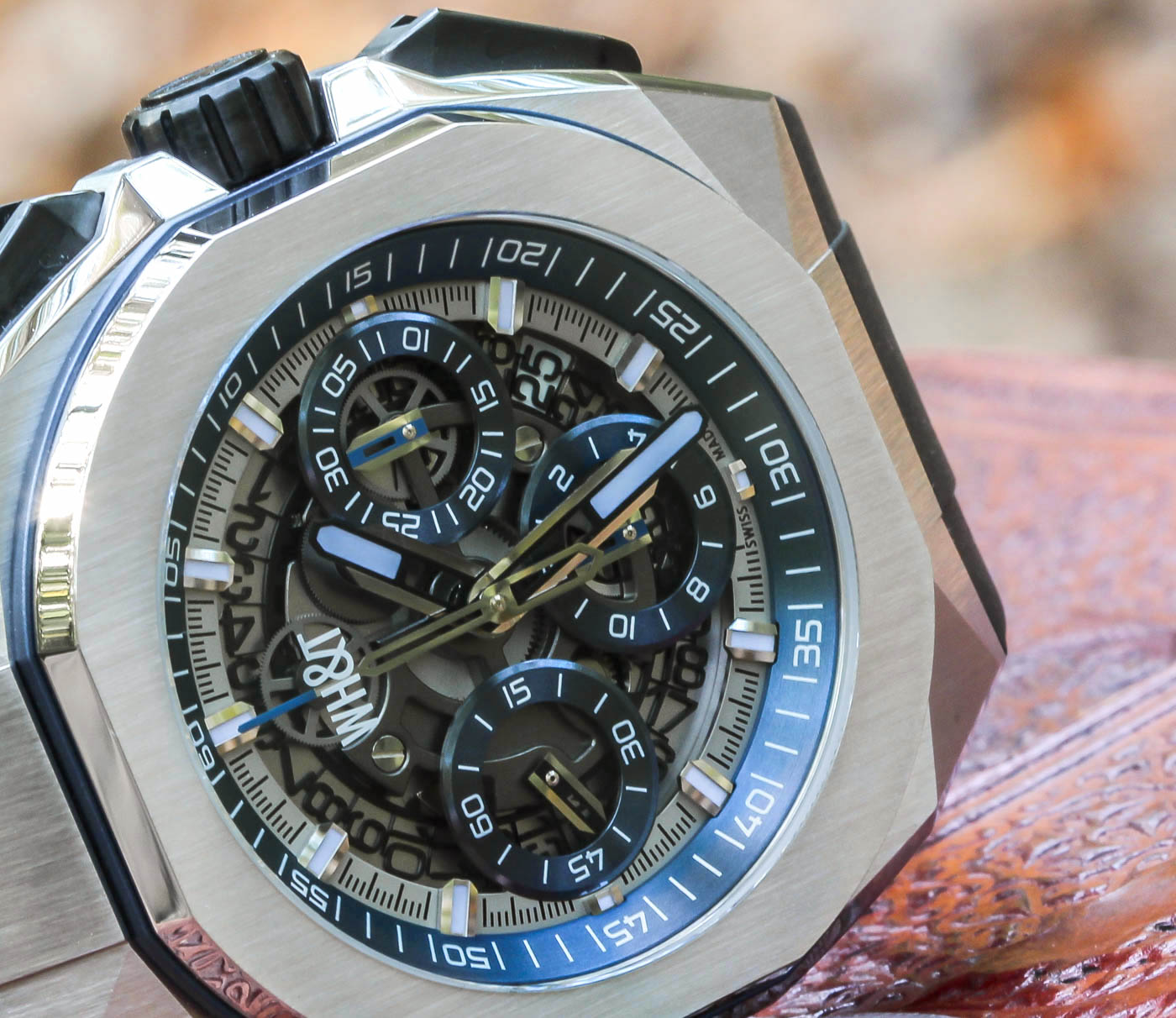 This is an educational exercise more than it is a commercial project. While this watch could very likely gain sufficient traction at full retail price (should it be put to market following the currently active Kickstarter campaign), building a brand and all that comes with it isn’t part of the mission statement. What that means is that you get the chance to own one of these limited pieces for significantly less than you would expect to pay for a watch of similar quality. While the WH&T LCF888 does not have an in-house movement, it is proprietary. Caliber C3057 is based on the Valjoux 7750 but manufactured especially for the school by Concepto Watch Factory. The major modifications (aside from the obligatorily customized rotor weight) can be seen on the dial side of the watch. The skeleton display provides excellent depth and a unique visage, thanks to this movement having been designed especially for this project. What is reassuring, however, is that the vast majority of components used in the C3057 are compatible with those of the 7750, so after-care should be something many service centers can handle. 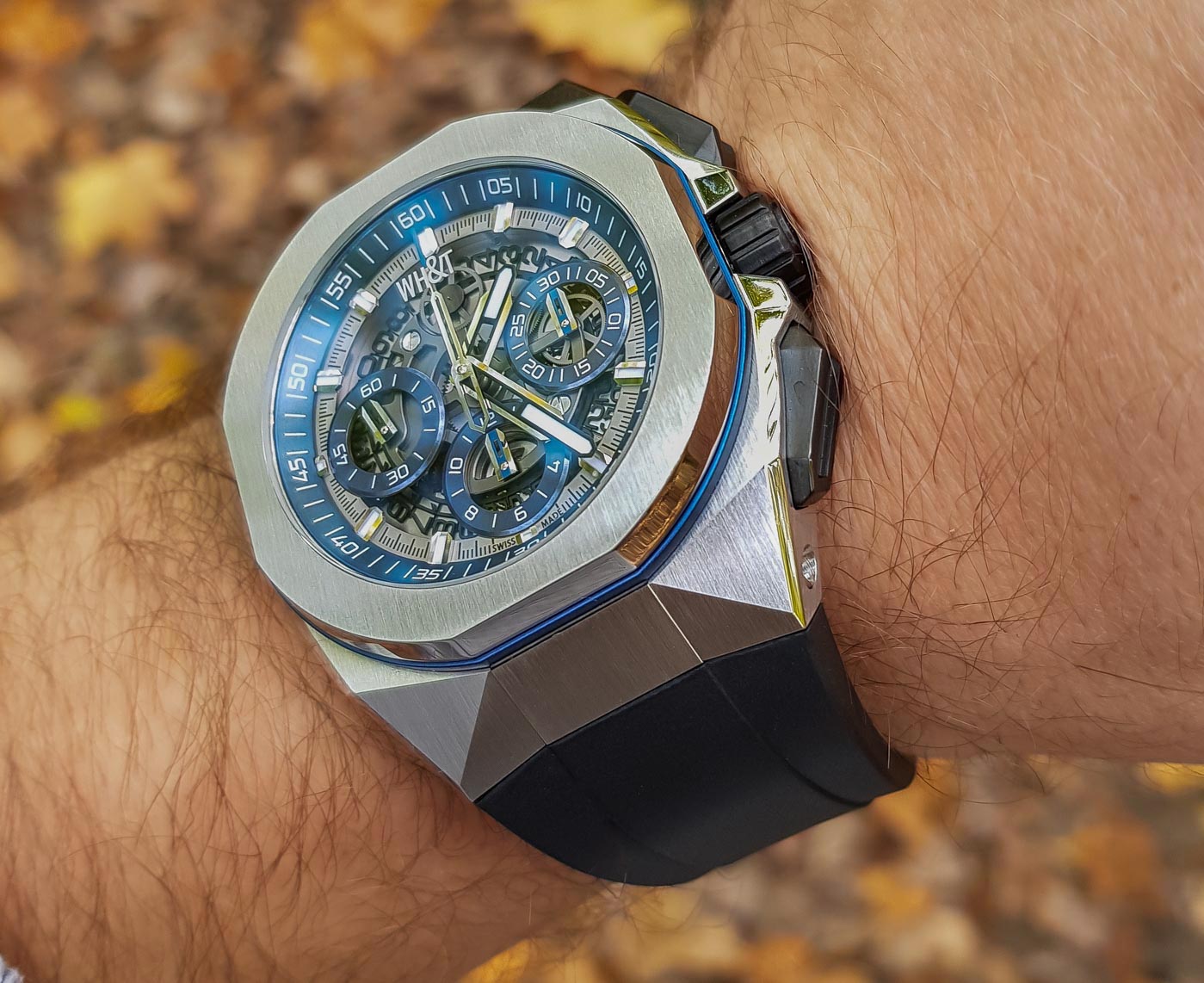 The attention to detail on the dial is immediately apparent. The skeletonized date ring — read between 4 and 5 o’clock — is a joy to behold and not something one would expect to see executed to this level in a watch of this price. The anodized decoration ring that sits beneath the 41mm bezel and the 45mm case (53mm lug-to-lug) coordinates perfectly with the anodized rehaut ring and subdials. This kind of chromatic congruity gives the whole ensemble a look of something way beyond this price bracket. The original handset provides excellent legibility and a distinct character, and while this high-concept design will certainly not be to everyone’s taste, the level of effort and refinement that has gone into the design and sourcing of each component is surely something all lovers of watchmaking can appreciate. 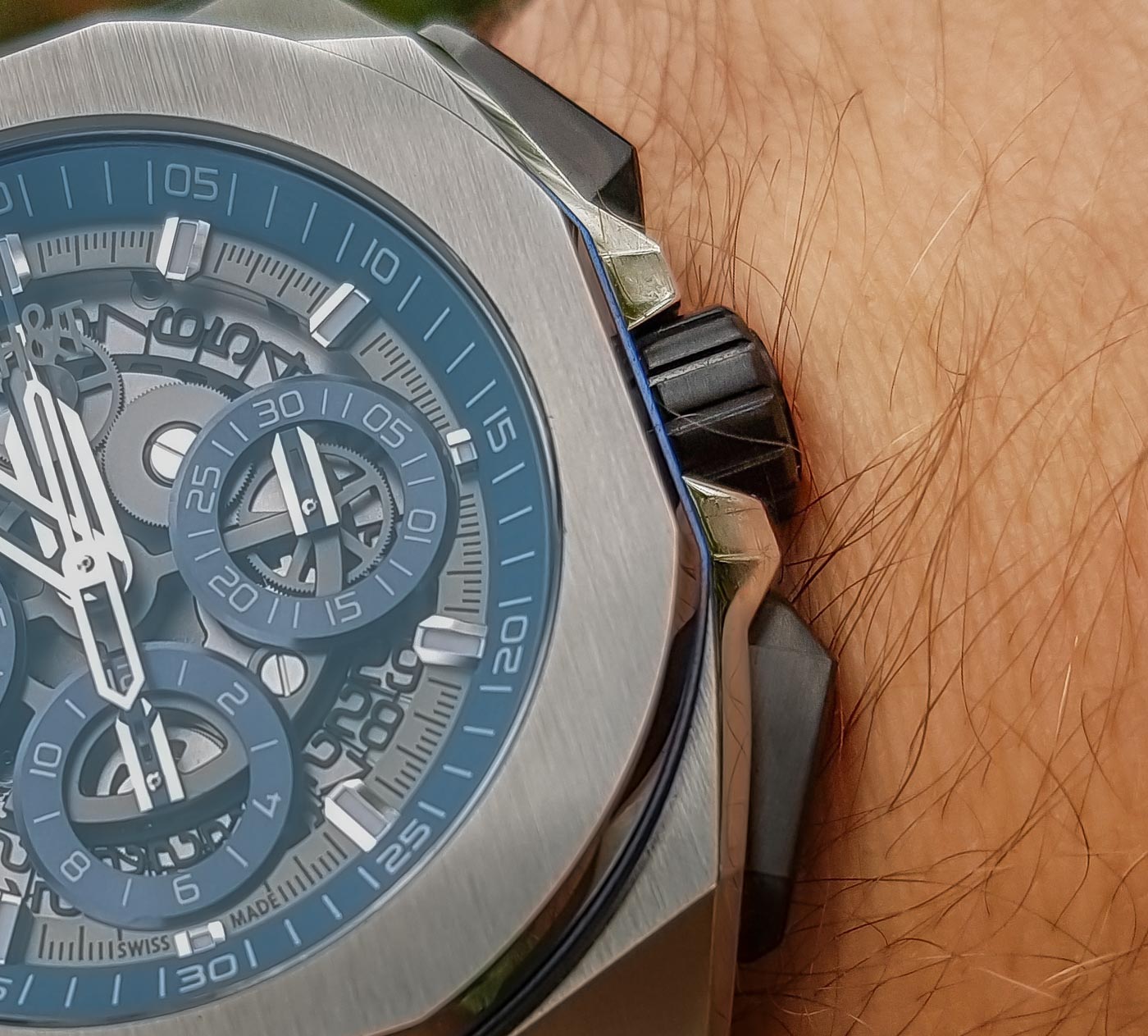 And that appreciation need have nothing to do with the watch itself. The project could inspire a new generation of watchmakers. Just think, the class of students behind this could contain the next generation’s master. Who knows what this kind of experience so early in one’s career could lead to? But beyond the actual value and good vibes surrounding this project, it forced me to ask myself a few difficult questions. 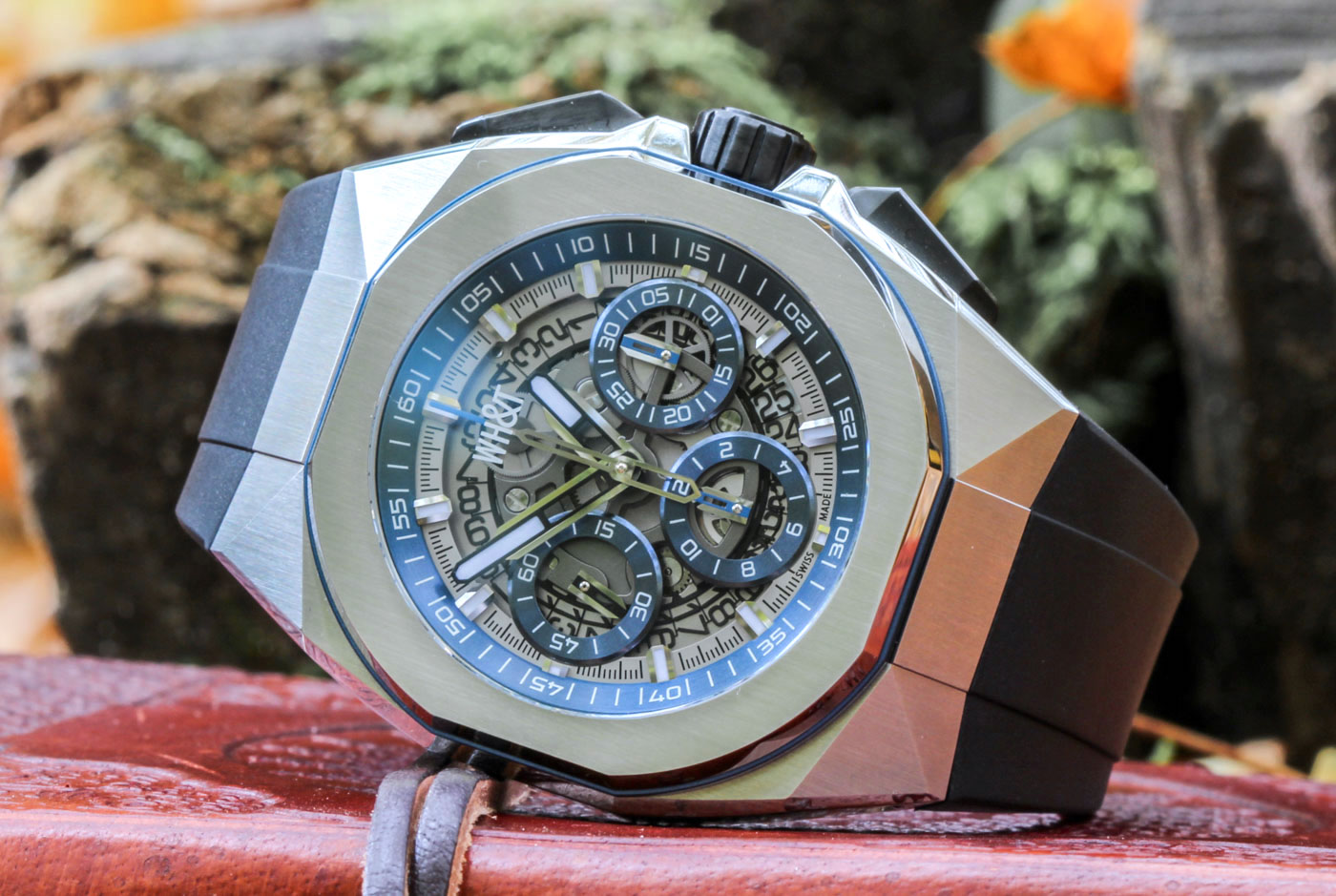 When I studied the watch (before I learned its price) I fell in love with it and decided I wanted to own it based on its appearance and the story behind it. As a lover of the Audemars Piguet concept watches and most mechanically interesting timepieces from Hublot, the aesthetic was right up my street, but I expected the price to be way out of my reach. When I learned how eminently attainable the LCF888 is likely to be, I couldn’t believe it. In some ways, I was disappointed it wasn’t more (which is not a feeling I ever thought I would have and one I can still barely understand). 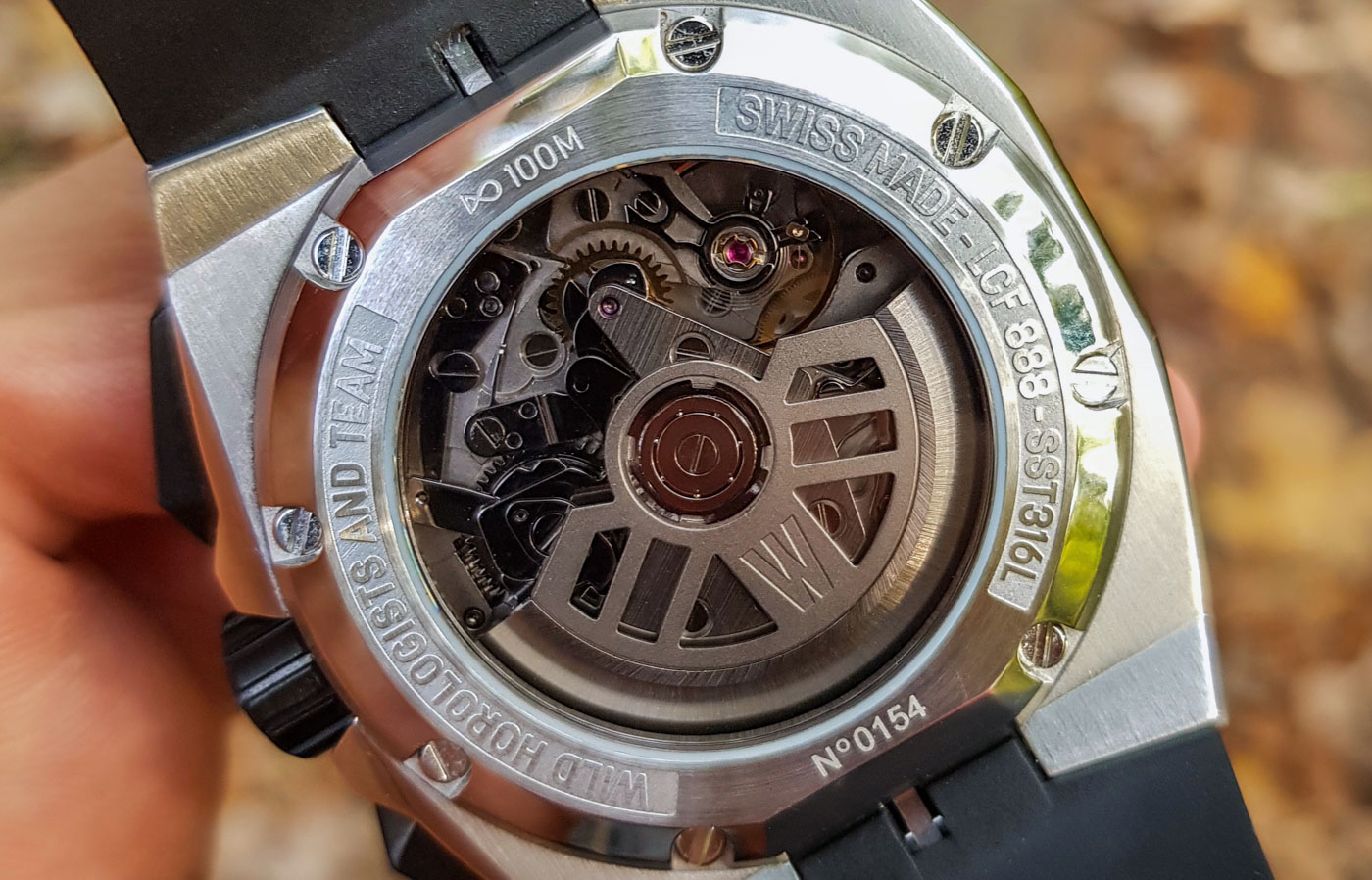 I’ve spent the last 17 years of my life in and around the watch industry. Throughout that period, I professed heartily that quality mattered more to me than branding, that I sought out the products that offered more for less tirelessly and was unimpressed by status acquisition. Did I want a Rolex GMT Master II “Pepsi” at retail? Sure. But would I ever countenance paying over the odds for it because it was “hip?” No way. I’d much sooner save my money and buy something unheard of that was providing a necessary service to niche horology on an accessible level. 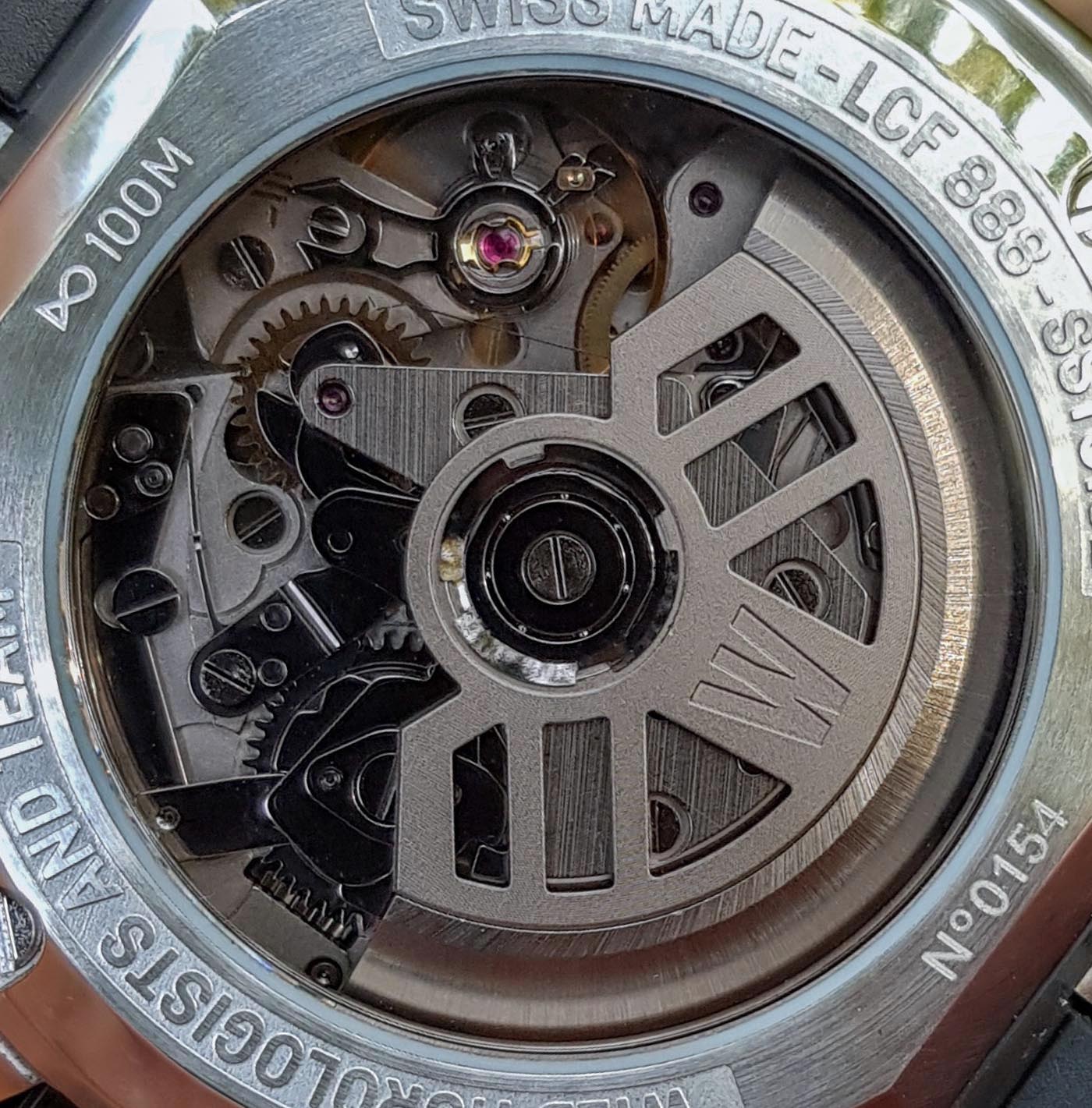 As soon as I got the WH&T LCF888 Chronograph on my wrist, I was dumbfounded. I’d always wanted an AP or a Hublot, but knew I was never likely to be able to afford one. And while I still had neither, I had something that scratched that aesthetic itch without sacrificing quality. I’m not saying there is no difference between this watch and those produced by either Audemars Piguet or Hublot (that would be ridiculous), but, quite simply, there is nothing wrong with the LCF888. Try as I might, I couldn’t find fault with its execution. 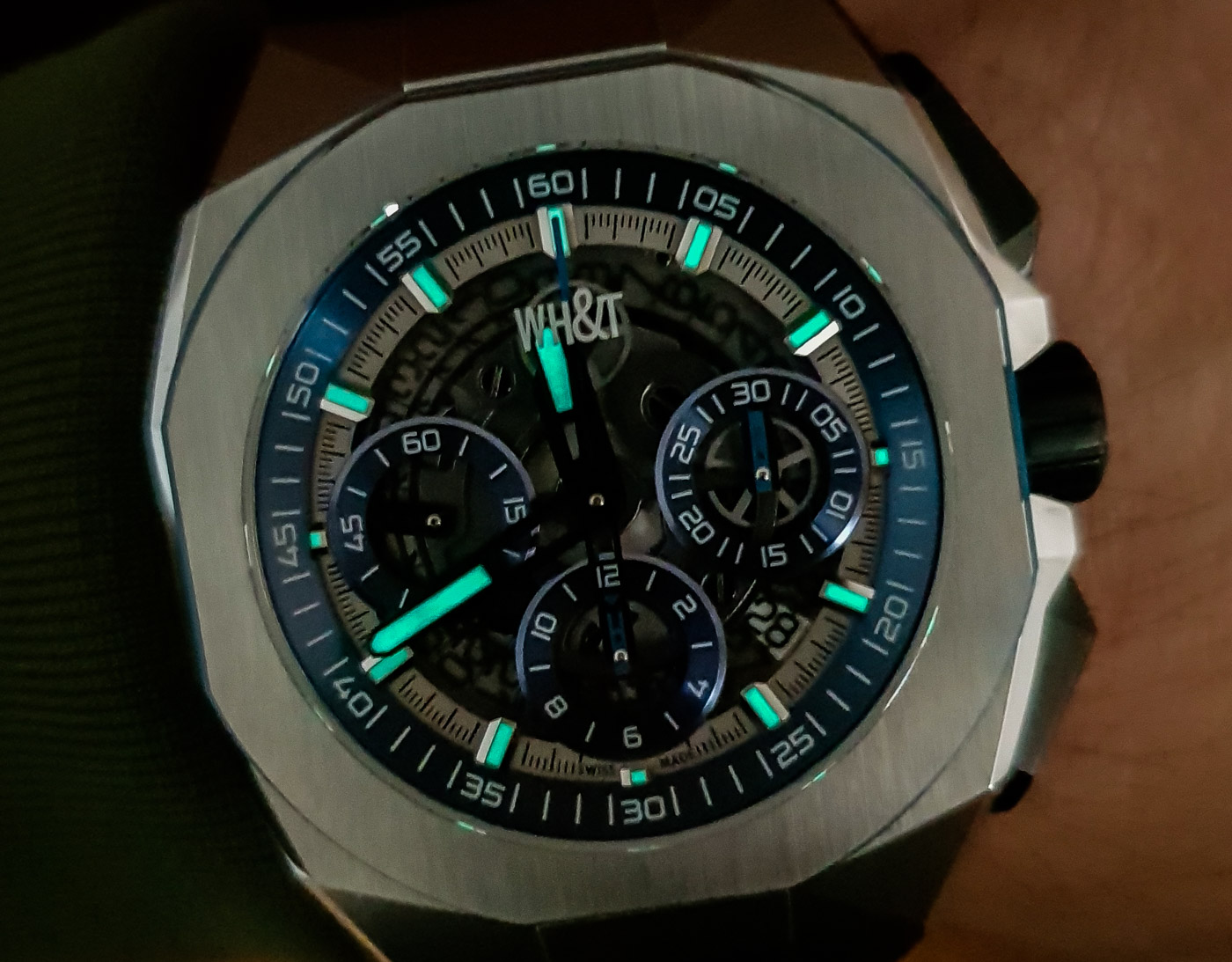 There is a massive difference in the level of research and development and hand finishing that goes into creating an AP or a Hublot. Not to mention the impassable gulf of design provenance and industry significance. But from a material perspective, and from a visual perspective, the LCF888 was enough for me to no longer feel bad about not owning either of the other brands. 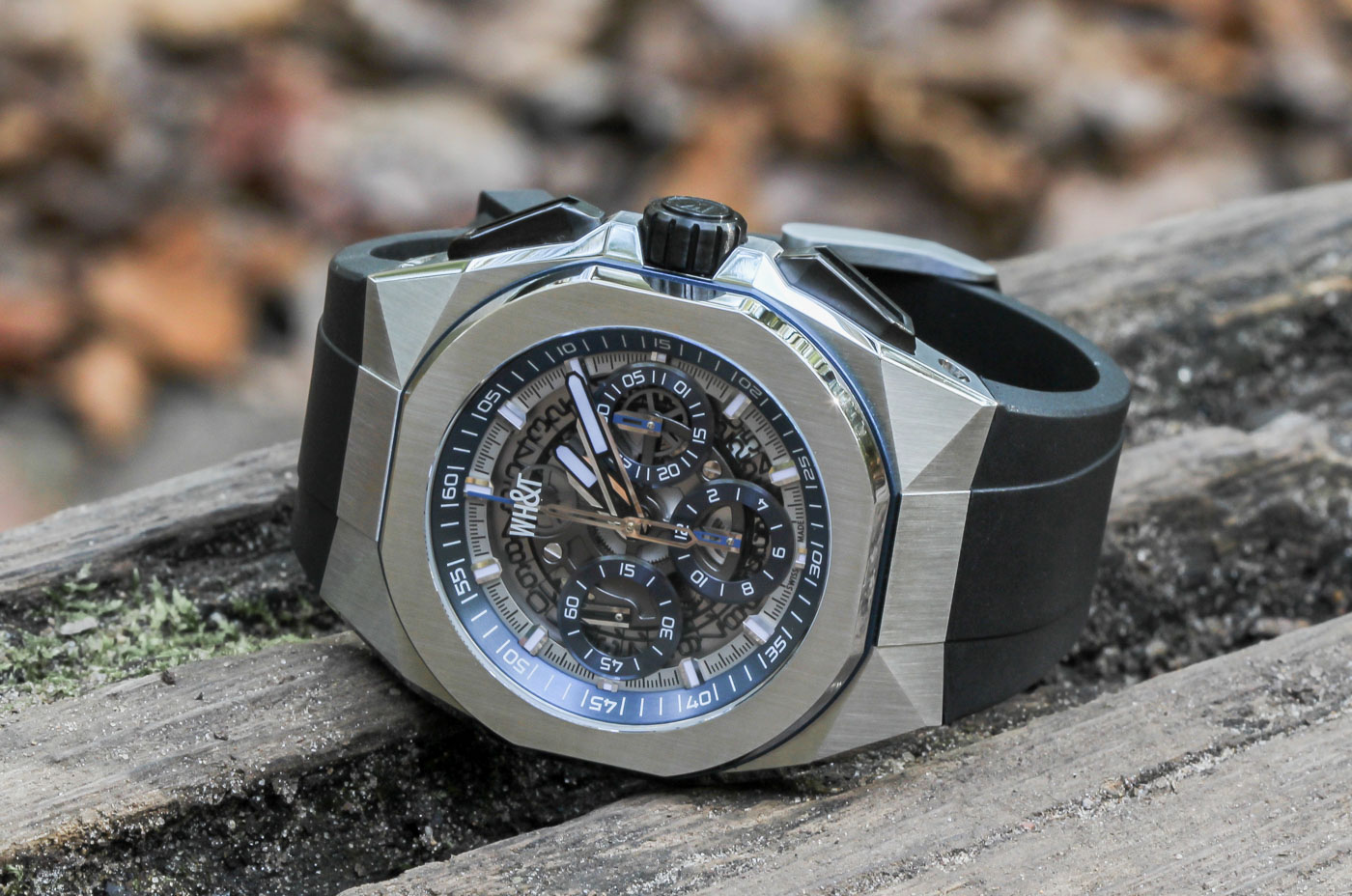 But it is not a brand. The story is simple, humble, and true. It does not confer a status boost upon a consumer (maybe kudos for those in the know, but that is a very slim slice of society). It is an experiment, a small club of people that buy watches for slightly different reasons. A brief and rare opportunity to be part of something fleeting. Were it not for the fact that a limited number of these timepieces are slated for production (around 1,000 units in total), this piece would have no chance of appreciation. It would be an anomalous object, floating in deep space. 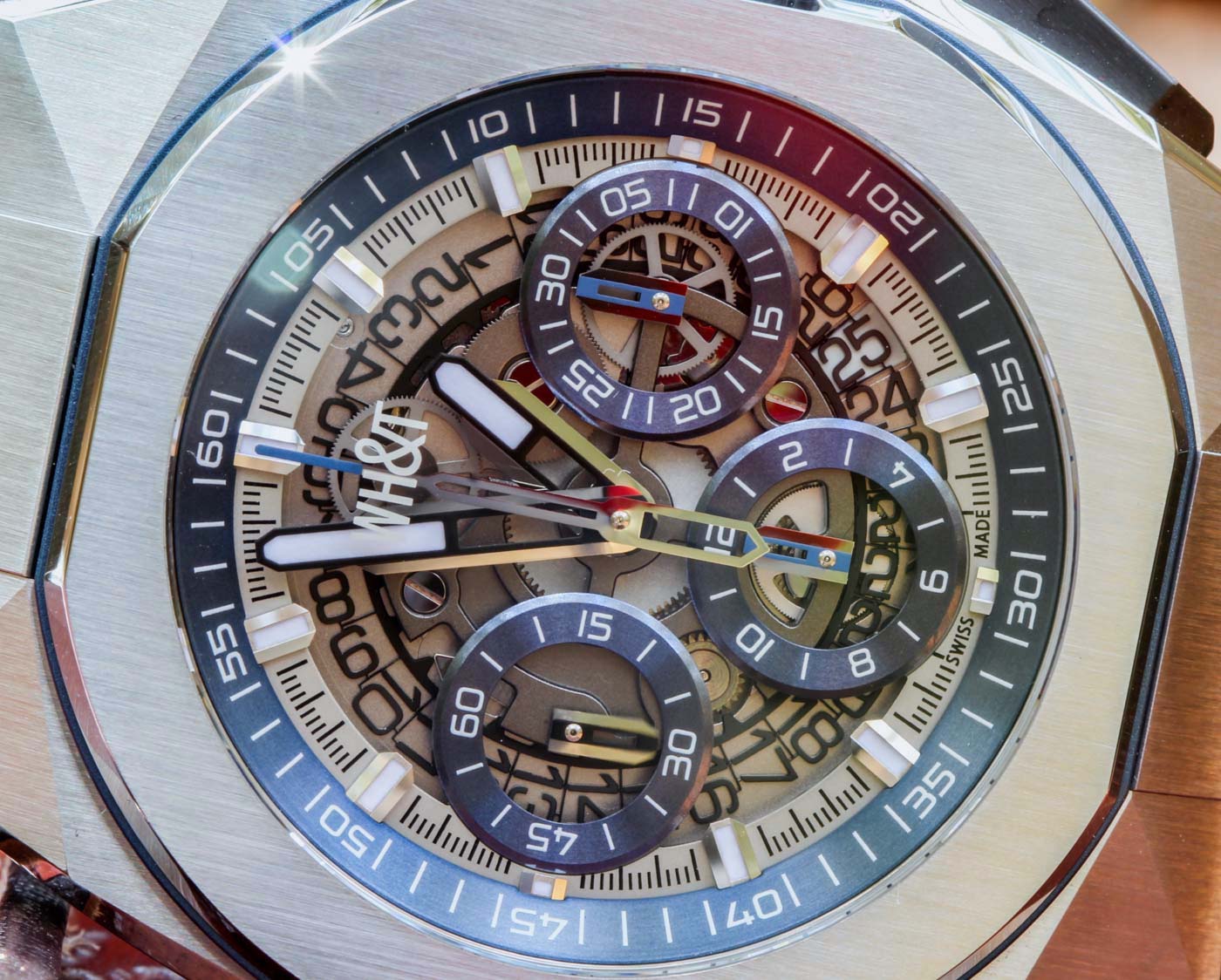 As it is, an interesting value proposition awaits those who choose to back the project on Kickstarter, which went live on October 29th. While the final price is yet to be set due to a few unknown manufacturing and advertising costs, the predicted cost (CHF 1,299-CHF 1,599), even at its very upper limit, is quite remarkable. Should this project experience success, the school may repeat the exercise next year. Who knows what this kind of endeavor could lead to? It turns the industry norms on their head with an almost reckless abandon. Love or hate the watch, you can’t deny that this team of horologists has brought us something wild to discuss. And they’ve got one of the best official website addresses going. Just try saying it out loud whenever you decide to visit what.ch.