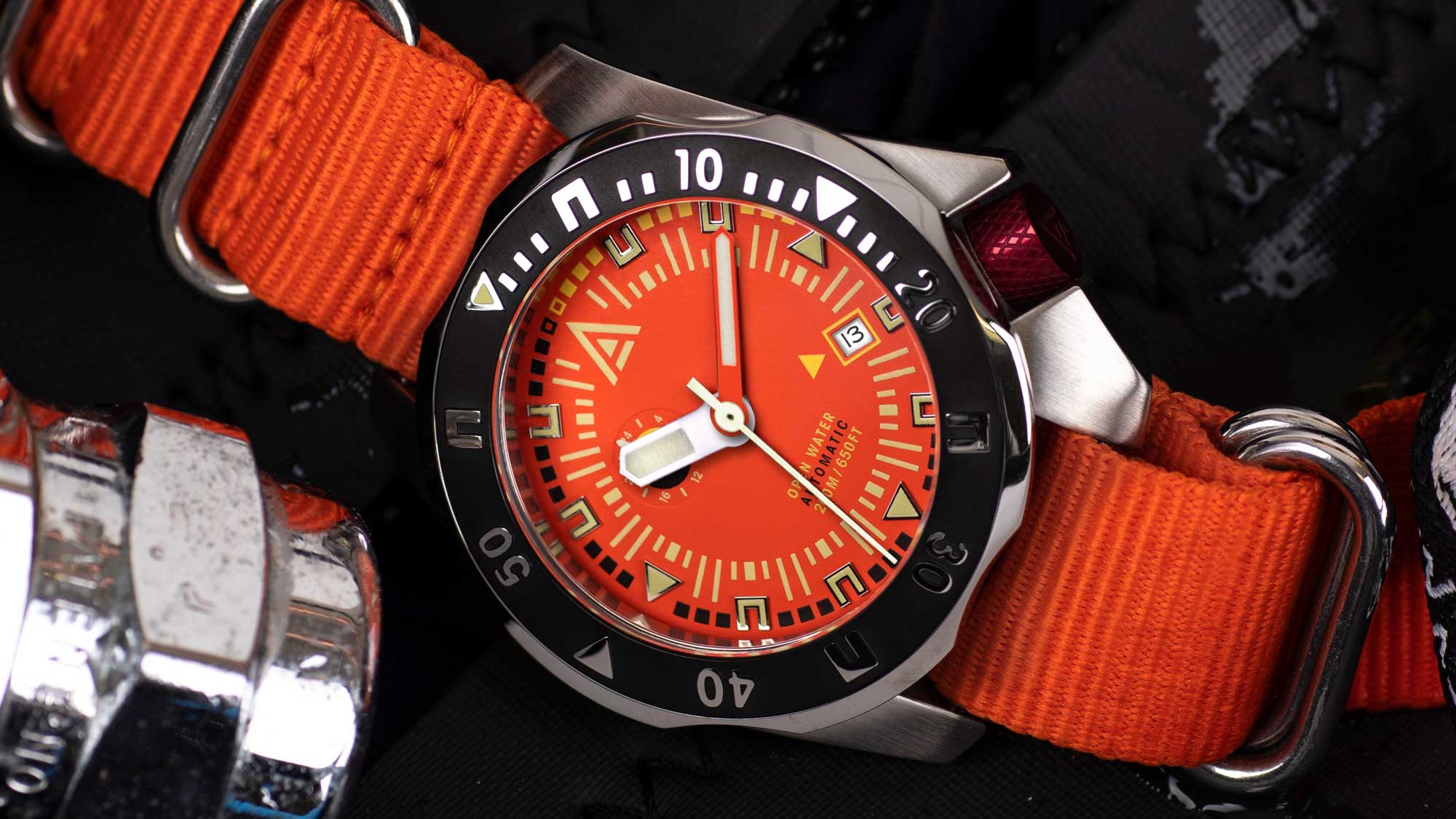 13 Comments
by SponsoredPost
Sponsored post presented on aBlogtoWatch by advertiser

Within the wristwatch realm, microbrands have garnered a justifiably significant amount of attention due to a combination of boundary-pushing designs and value propositions. Crowdfunding sites like Kickstarter have become a fascinating microcosm of brands that are looking to bring their imaginations to life. With a perpetual rotation of new companies and models to peruse, it is a thrilling new frontier for watch enthusiasts to explore. WT Author is a brand that has taken advantage of this sales platform since its flagship release in 2013 — the Nº 1973 represents its eighth series to be released since. Pulling subtle design cues from the early dive watches of the Disco Era, the 1973 lineup is sure to be a far-out favorite for fans of the brand and newcomers alike.

Based in the heart of Shropshire, UK, WT Author is a contemporary company that builds every watch to order in its workshop. Each new series from the company, including the Nº 1973, indicates an impressive level of rumination on aspects such as design and components. In the case of the Nº 1973, the design phase began over a year ago, in January of 2020. This timeline makes for an innovative and quality product that is more than ready to tackle any rigors that life may throw its way. 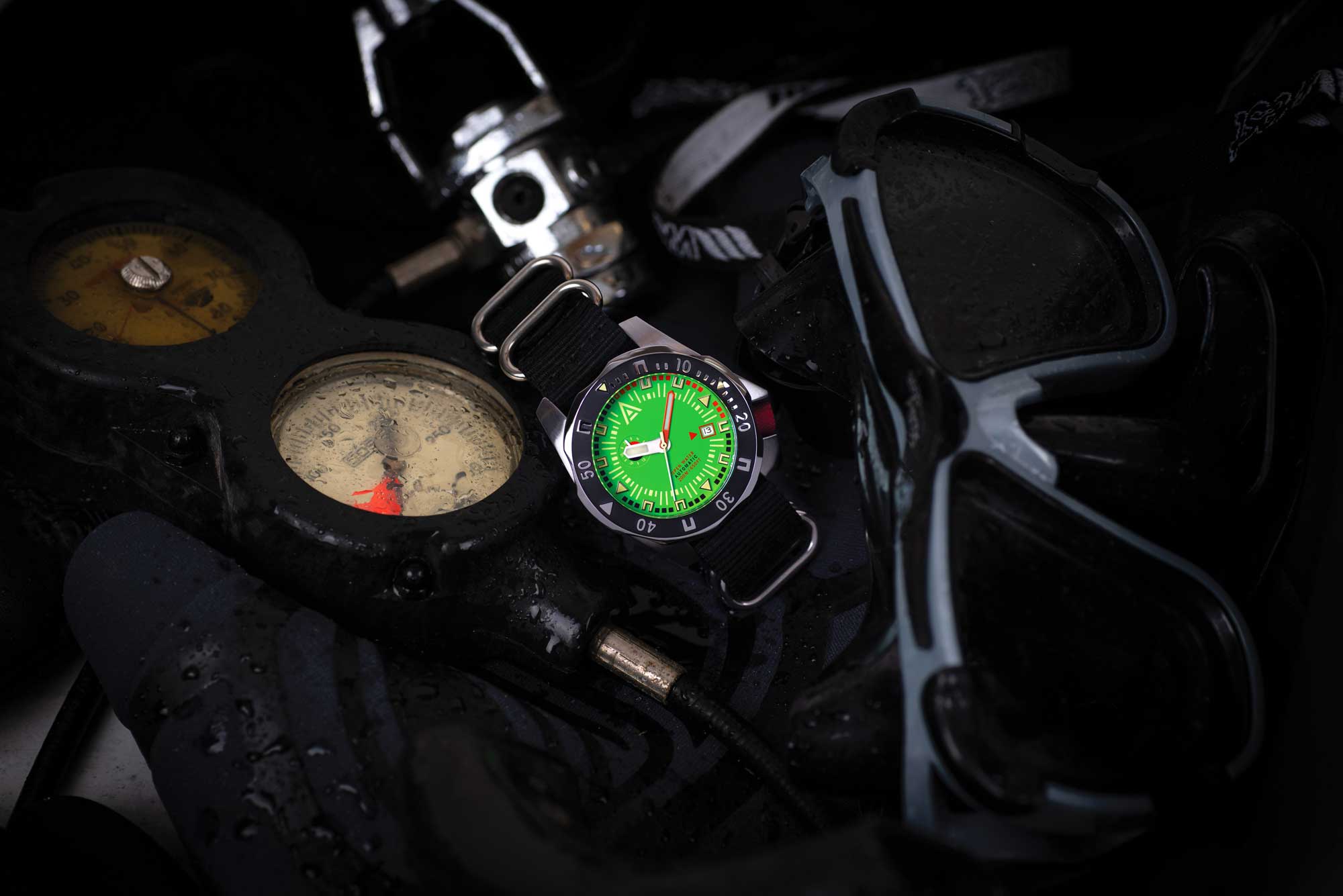 As previously mentioned, the Nº 1973 series pulls some inspiration from vintage dive watches, but the specific year of 1973 harkens to a particular point in time. 1973 is the year that the British Ministry of Defense first issued soldiers the now wildly popular G10 NATO strap. Not only will each watch come with a pair of modern G10 NATOs in an abyss black and fiery orange guise, but each watch itself is built to handle the toughest and most diverse of conditions, just as the original G10-clad watches had to do after their introduction. This is evident throughout each facet of the piece; it is a robust diver, through and through.

From the broad array of chromatic options to the purpose-driven details, the Nº 1973 is a utilitarian tool watch tailored specifically to the end user. The 316L Stainless Steel case measures a mighty 45mm in diameter and stands proud at 14.45mm in total height. With a lug-to-lug measurement of 49.5mm, this is no diminutive diver, but the size of the case is balanced well by the 22mm lug width. The massive 4 o’clock crown is signed, textured, and heavily shielded by a prominent crown guard that adds a touch of visually pleasing asymmetry on top of the increased defense against accidental damage to this vital component. A combination of polished and brushed finishes accents the bold nature of the case, while an almost diamond-plate texture is carried from the crown to the outside of the case. 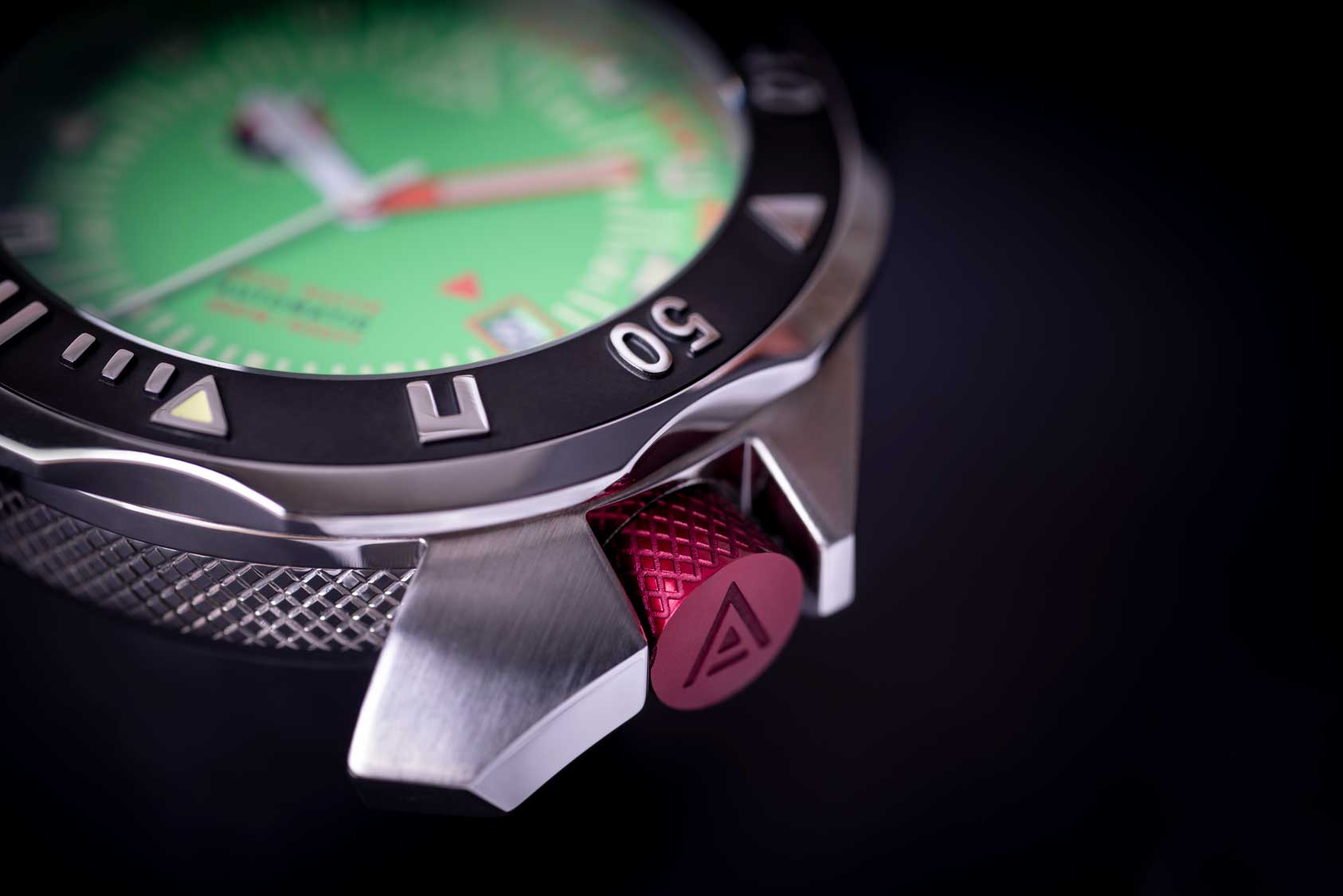 When viewed head-on, the 1973 is a veritable cornucopia of colors and clever contrasts.  It is available in a quintet of colorways: blue, green, black, yellow, and orange. High visibility hues, historically, have proven themselves to be favored by divers, so it comes as no surprise that the yellow and orange dials shine like a lone lighthouse in a pelagic squall. WT Author chose to employ signature “tuning fork” applied indices as each hour marker, which are generously filled with Super-LumiNova for readability in all conditions. The hour and minute hands are built like two medieval broadswords emerging from the center of the dial. The minute hand is clad in hunter orange, making it ultra hi-vis, which again stands as a testament to the functional nature of the timepiece. After all, while divers are underwater, they tend to pay far more attention to minutes rather than hours. The 4 o’clock date is clearly visible, with a corresponding arrow pointing to it for quick reference. The 10 o’clock portion of the dial is occupied by a quick-reference 24-hour subdial. Needless to say, there is a lot of functionality packed into each piece. 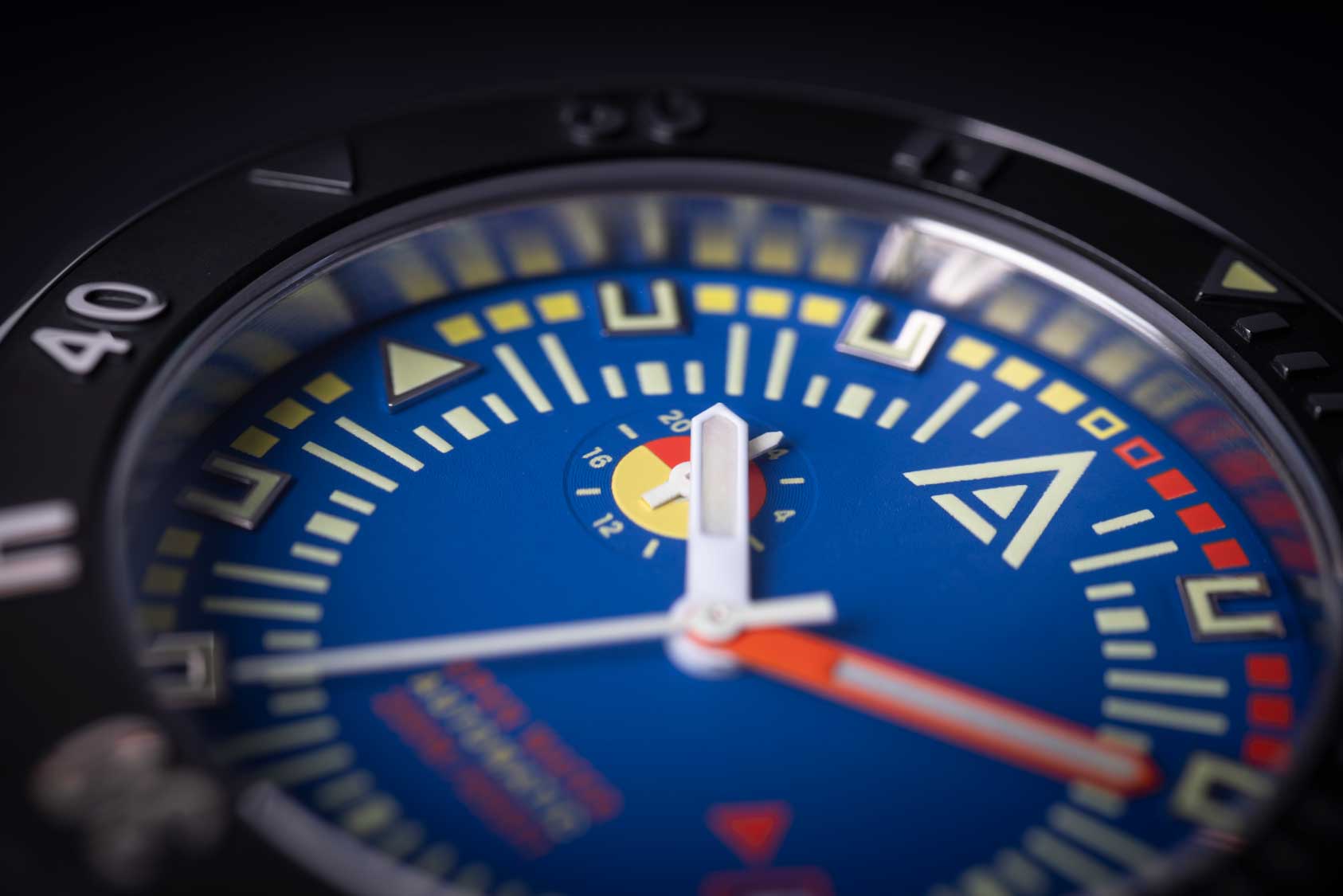 For reliability and durability, WT Author made the decision to utilize the Miyota caliber 8217 mechanical movement from Citizen Watch Co. With a power reserve of 40 hours, this is a movement that will remain wound for an extended amount of time once fully charged. Citizen has been producing movements in its Miyota, Japan-based factory since 1959, so with the 8217 movement comes half a century of experience and expertise.  Protecting both the front and back of the Nº 1973 is a scratch-resistant sapphire crystal. The flat, forward-facing crystal is encircled by a scalloped, uni-directional bezel. The black, ion-plated surface provides contrast against the silver finish of the raised steel numerals that are so important when tracking elapsed time. The sapphire exhibition caseback screws down to further solidify the 200m of water resistance, while also allowing for unfettered viewing of the powerhouse within. 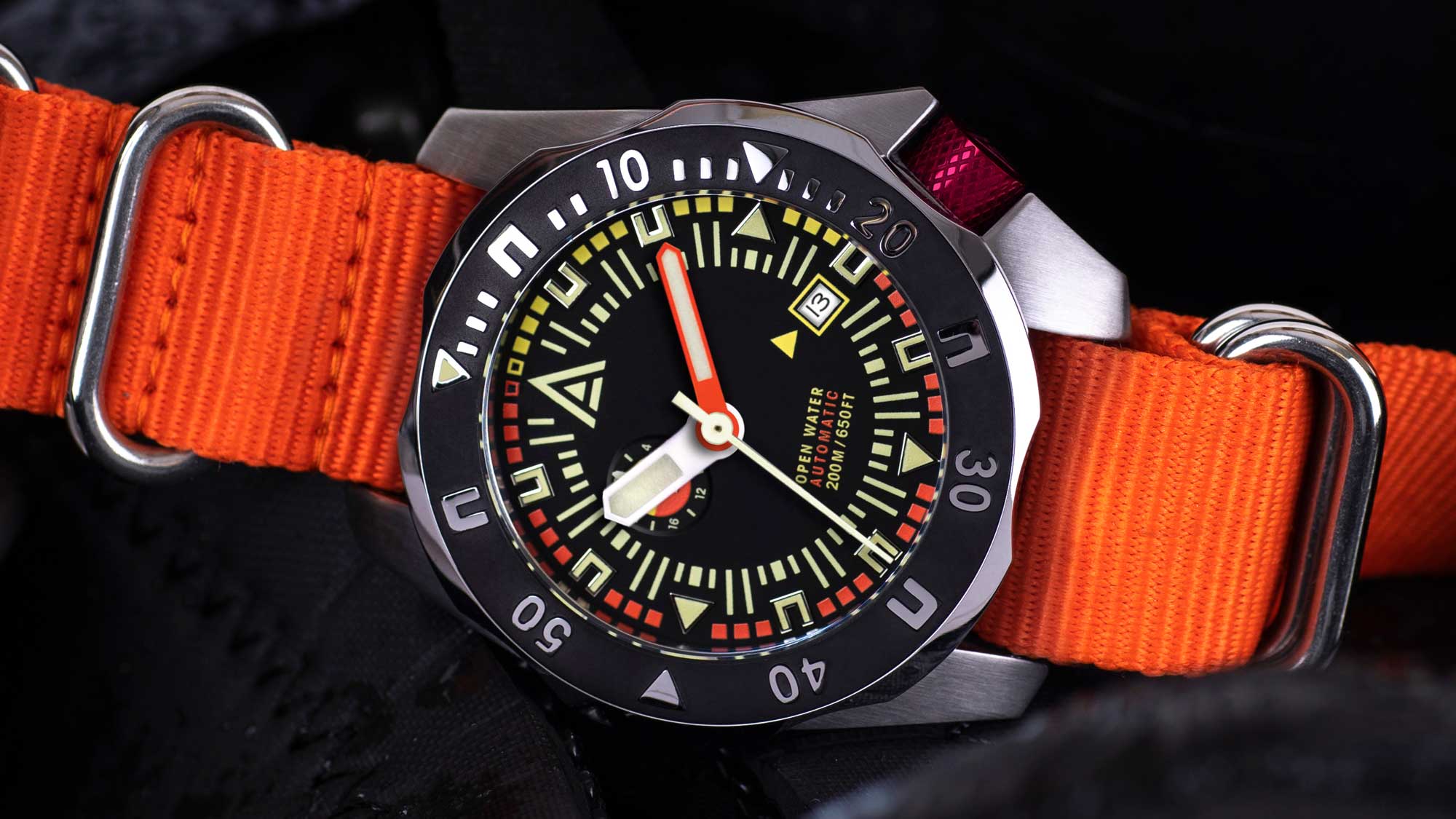 Each color option for the Nº 1973 is limited to just 100 individually numbered pieces, so if a specific color is singing you a siren song, be sure to act quickly. The Kickstarter campaign officially launched on the 6th of April, and appears to be off to a strong start. For a pledge price of £350 ( approximately $480), you get a Nº 1973 in the color of your choice, 2x G10 NATO straps, and a slew of bonus material relating to the design process of the watch. There is even an option for a matched jubilee-style steel bracelet, which blends perfectly with the casual confidence that emanates from this piece. Shipping is anticipated to begin in November of 2021, so head over to the Kickstarter campaign and treat yourself to a little gift set to arrive just before the holidays.