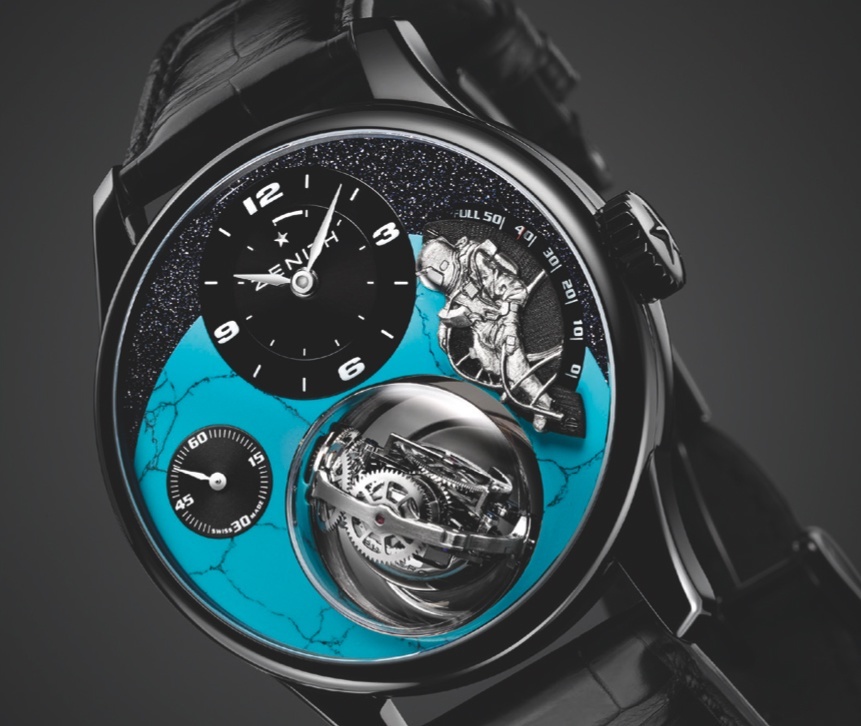 We love and respect Zenith for the El Primero, the rock solid, high-frequency automatic chronograph caliber – accepted by many as the first of its kind. Over the years, we have seen some very interesting modifications of that movement as well as some other intriguing concepts from the Le Locle based manufacturer. However, the Zenith Academy Christophe Colomb with its unique gyroscopic system is arguably the most impressive and technically challenging movement the now LVMH-owned company has produced since it debuted the El Primero in 1965. Today, Zenith has announced a new version of this gimbal-equipped movement, the Zenith Academy Christophe Colomb Tribute To Felix Baumgartner.

The brand also likes to call it a “tribute to the first 21st century extreme explorer,” and while that may be a bit of a stretch, Felix Baumgartner’s attempt to break the sound barrier with his own body in a free fall from the edge of space in 2012 – while wearing a Zenith Stratos (hands-on here) strapped to his spacesuit – deservedly put him in the spotlight around the world. Zenith was among the few sponsors of this daring adventure, and along with a number of different Stratos models, now pays tribute to Felix’s achievements through a limited edition of the Academy Christophe Colomb. 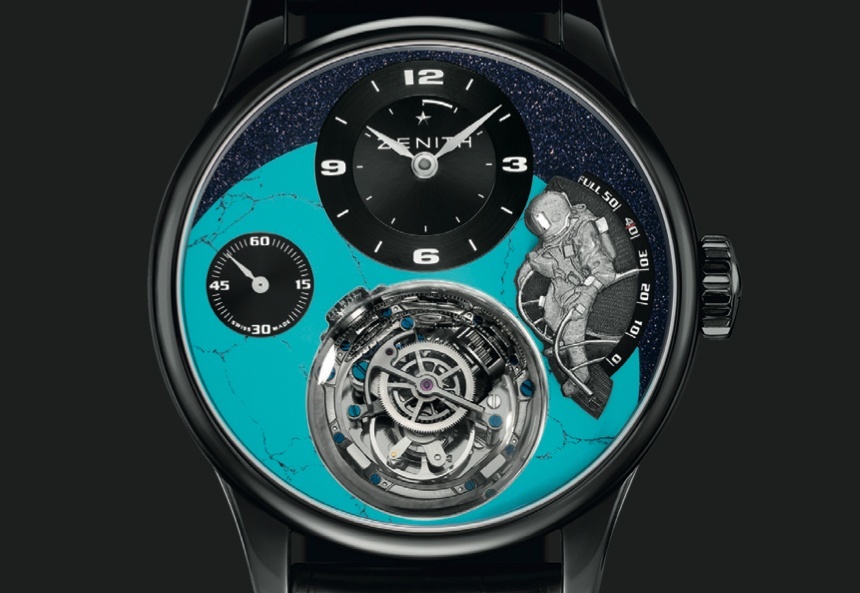 What made the Academy Christophe Colomb so unique upon its debut back in 2010 was, of course, its “self regulating gyroscopic module” – which was a first in wristwatches. What Zenith did there was create a gimbal-like system that would hold the entire escapement in a horizontal position at all times, regardless the position of the watch itself. This allowed for superior timekeeping performance as the balance wheel and the hairspring were constantly in a horizontal position – allowing for near-perfect regulation. This unique design necessitated a rather extraordinary looking sapphire bulb that extended from the pane of the caseback and the front. 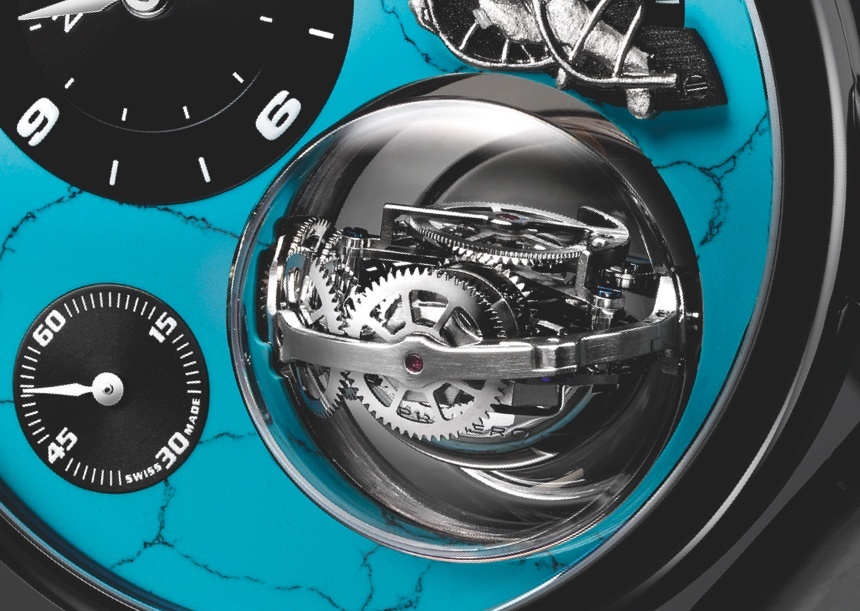 This layout, the gimbal-system, the sapphire bulb and the hefty, 45 millimeter diameter remained the trademark design elements of the several limited editions of the Academy Christophe Colomb – the Tribute to Felix Baumgartner follows the Christophe Colomb Hurricane (hands-on here) and the 3-watch set Hurricane Revolución (debuted here), a version of which depicted Ernesto “Che” Guevara engraved in the center of the case back.

The Zenith Academy Christophe Colomb Tribute To Felix Baumgartner version will be limited to just 10 pieces and will depict Felix standing on the edge of the capsule of his balloon, right before he makes the jump. A large portion of the dial is in is in turquoise, representing the Earth in a more abstract way, while the upper section of the base of the dial shows the Milky Way in aventurine, as though it were viewed from the stratosphere. Time is displayed on the subdial at the top of the dial, which has a thin white line added to it between the 0 and 4 minutes positions, as a tribute to Felix’s jump that lasted 4 minutes and 20 seconds. Running seconds are displayed at the 9 o’clock position, serving as an horology-themed – and rather odd-looking – geographic element; while remaining power reserve is indicated at 3 o’clock. 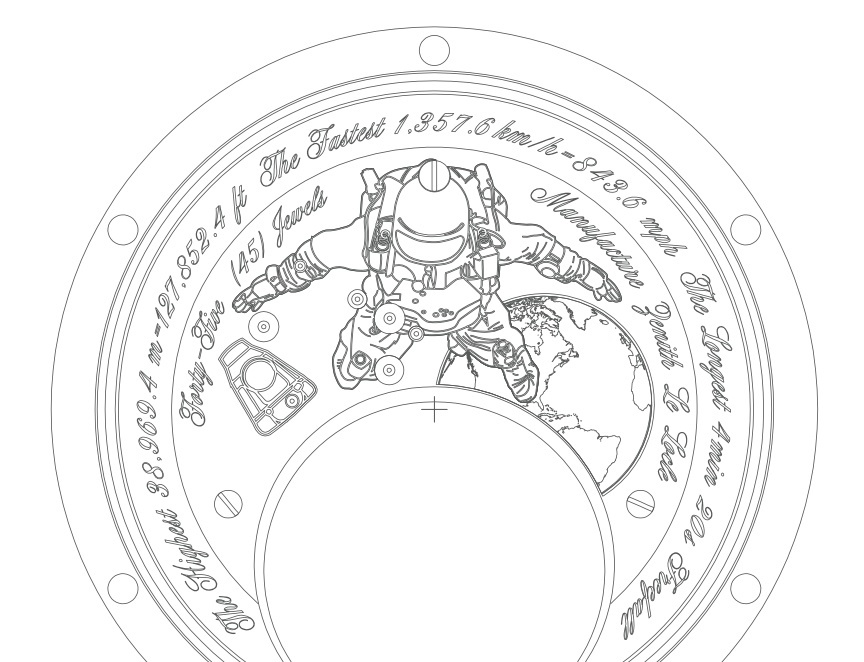 The case back will feature an 18k gold power reserve bridge that illustrates the Austrian base jumper, his capsule, and the Earth. These three elements are surrounded by statistics data of his fall, including its height and the fastest speed that he achieved – 28,969 meters and 1,357 km/h, respectively. The watch will be cased in DLC coated platinum, a highly unusual combination that we have very scarcely seen before in high-end watchmaking.