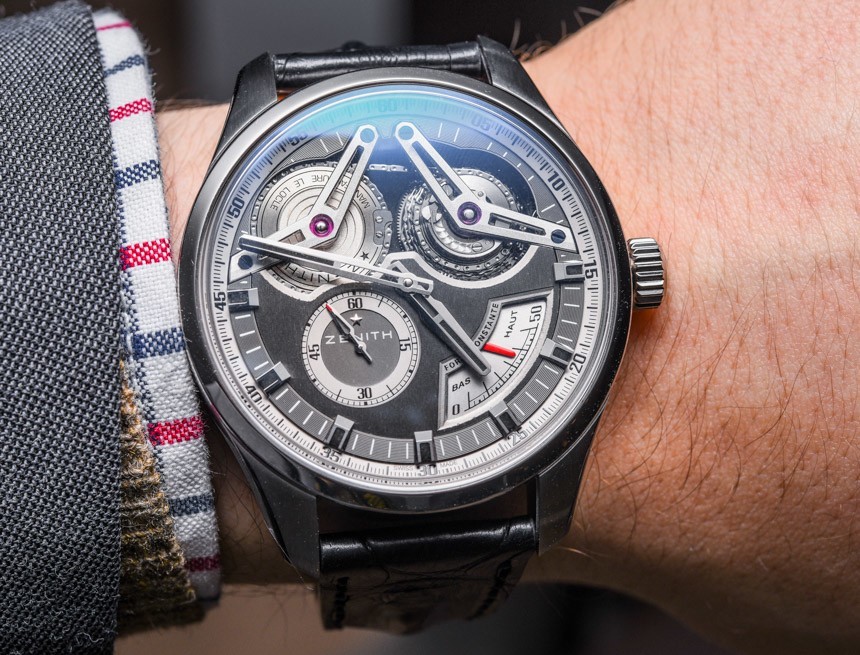 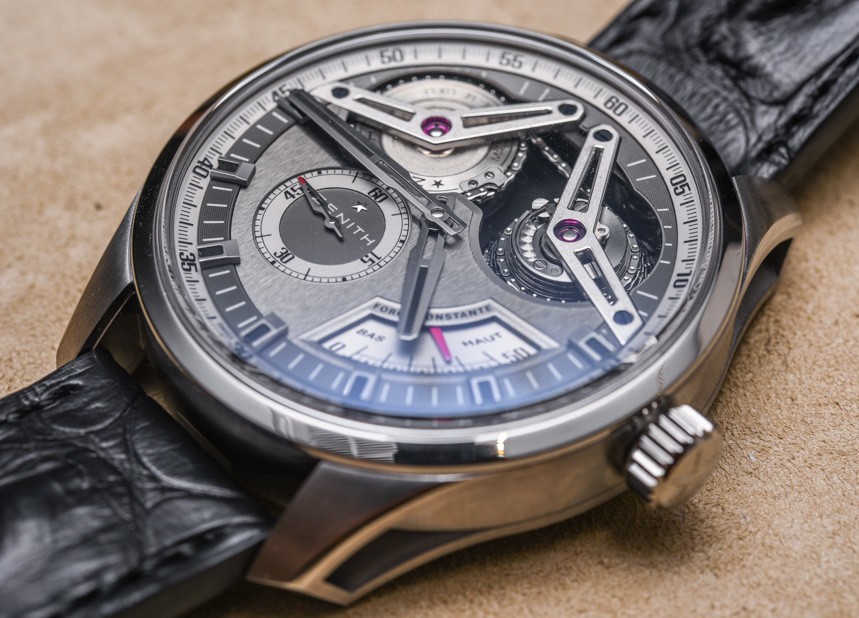 It happened earlier this year that Zenith released their Academy Georges Favre-Jacot watch in celebration of the 150th anniversary of the brand. Housed in a classical rose gold case, the watch was designed to draw attention to a bold new manufacture movement and put its fusée and chain mechanism under the spotlight. It was a bold watch that, as Zenith in general has been doing rather successfully lately, merged contemporary design with traditional mechanics. Now, just after the 150th anniversary, Zenith is presenting this also-limited edition follow-up, featuring the same movement dressed in a considerably more modern outfit with the Zenith Academy Georges Favre-Jacot Titanium watch. 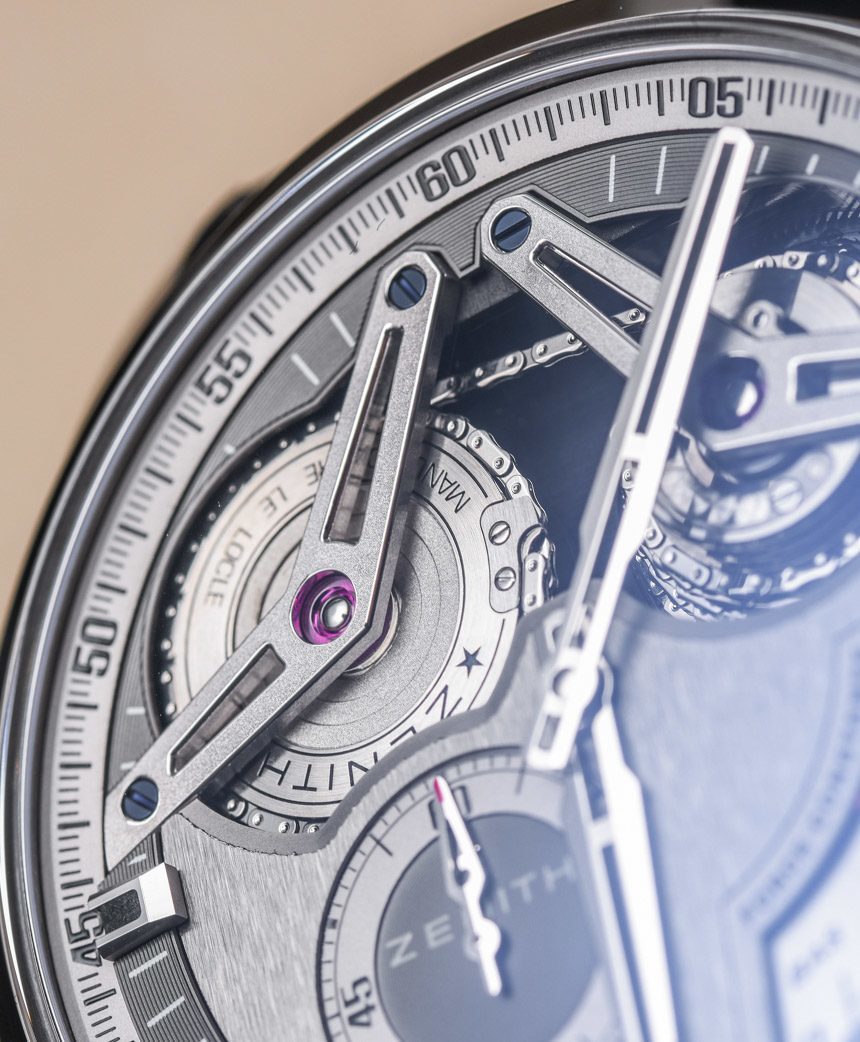 Located between 9 o’clock and 3 o’clock, the kidney shaped upper section of the face shows off the remarkably complex fusée and chain mechanism. Originally designed to counter the effects of insufficient torque delivered by a mainspring near the end of its power reserve, this “device” comprises a bicycle-chain-like, well, chain, that connects the barrel with a geared cone with ascending ratios. It is as complex as it sounds, and this time around we really won’t go too into the finer details about the technical aspects, as this was covered in-depth in our hands-on article of the Zenith Academy Georges Favre-Jacot here. 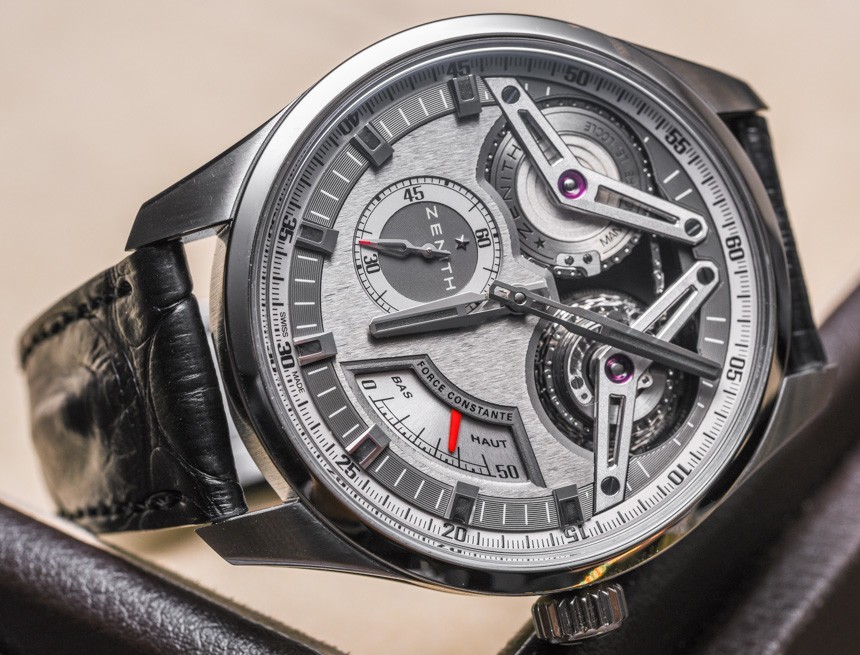 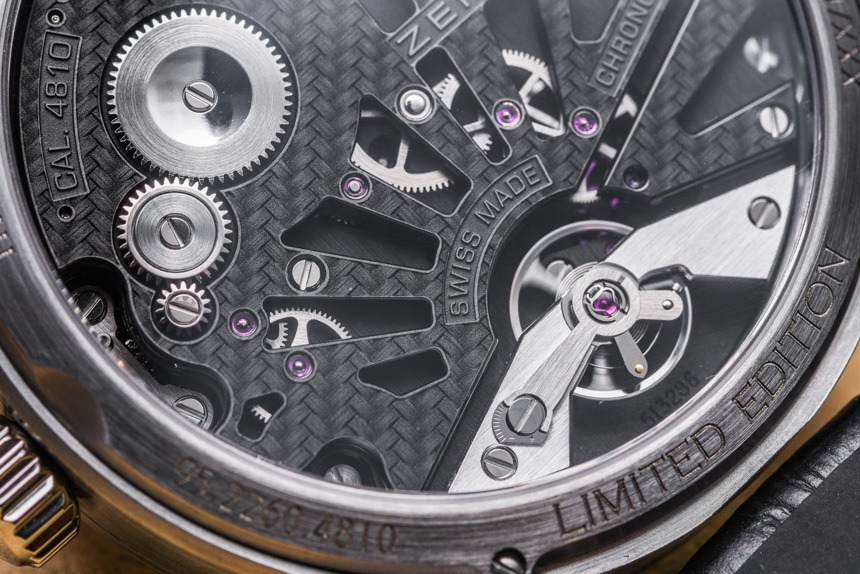 It is quite obvious that Zenith wants to highlight aspects beyond the traditional and somewhat staid (and I mean those words in the best possible way) cues of the rose gold version. Indeed, the creation of (a rather ambitious number of) 150 limited edition pieces of this Zenith Academy Georges Favre-Jacot Titanium model could be the alluding to the next 150 years, as opposed to celebrating the past one-and-a-half centuries. The use of concentric circles throughout the dial and the brushed titanium on the case helps add a lot of textural richness to the watch without having to compromise on the uniformity of the color scheme. The flat titanium case, as opposed to the curved gold, helps drive the edgy look home even more. 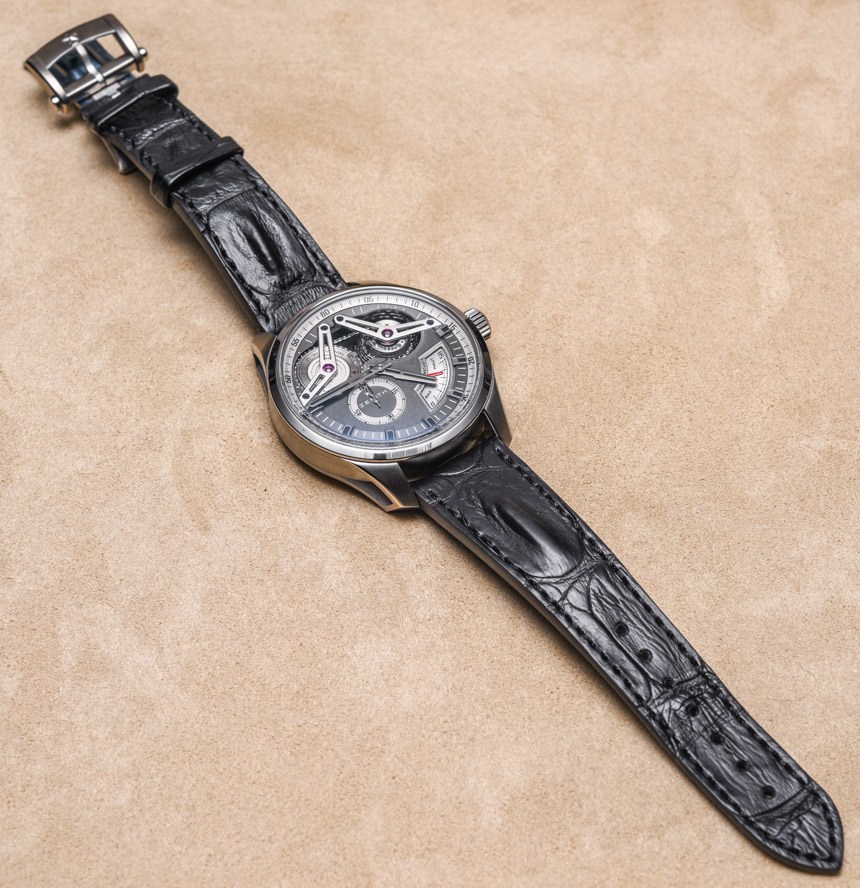 Let’s talk for a moment about the particular differences between these two models. Obviously, we mentioned the titanium case replacing the more old-fashioned alternative in rose gold. The Zenith Academy Georges Favre-Jacot Titanium version is also a tiny bit bigger, measuring 46mm over the 45mm of the rose gold version. While a little wider, it’s also thinner at 14.05mm thick – 0.30mm thinner than the gold watch. What you also get in terms of water resistance (though we doubt anybody is really taking either of these for a dive) is 100 meters for the titanium watch. The gold is water resistant to 30 meters. Though, again, it’s unlikely either of these watches is going to see a lot of action underwater, that 100 meter (or 10 bar) rating assures that even if accidentally submerged in a swimming pool, say, the Zenith Academy Georges Favre-Jacot Titanium will resurface unscathed. 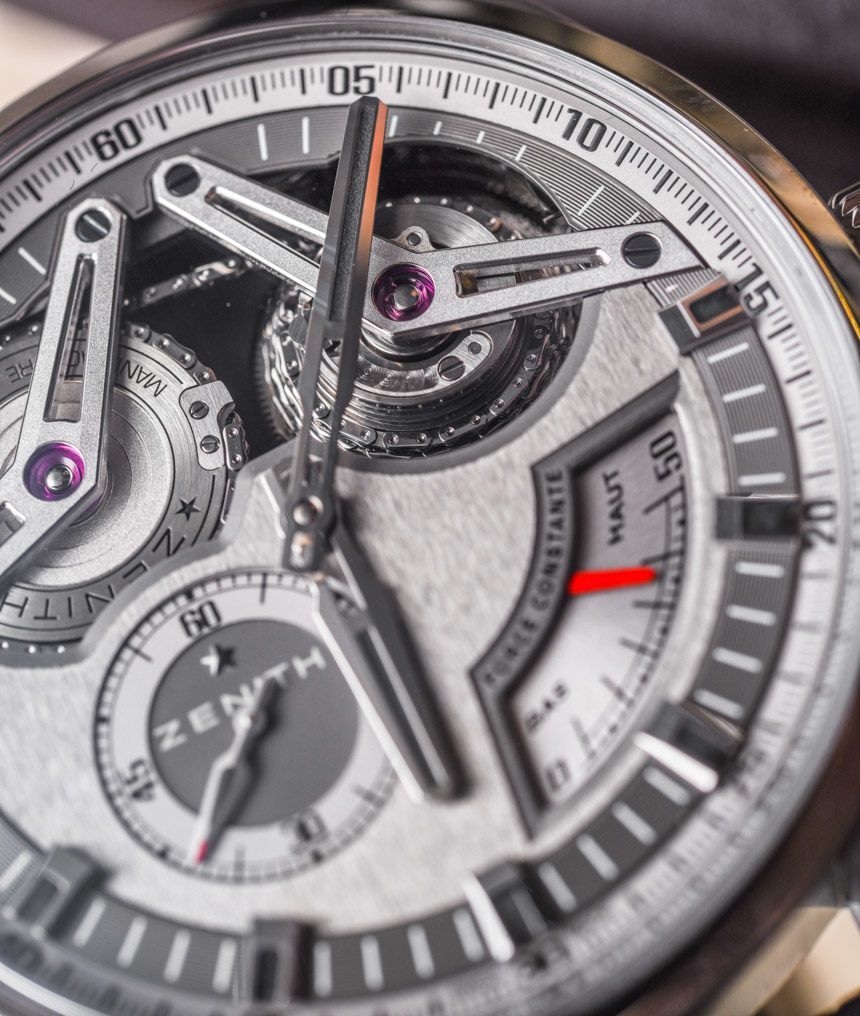 The hour markers keep up with this theme of embracing the new over the traditional in the Zenith Academy Georges Favre-Jacot Titanium. The gold version had classical gold-plated and faceted hour markers which stand in pretty stark contrast to the rhodium-plated, faceted hour markers with SuperLuminova SLN on the titanium model. Also of note, where the gold model had small, hardly-noticeable five-minute markers, the titanium model has them larger, bolder, and in an almost racing-inspired font. 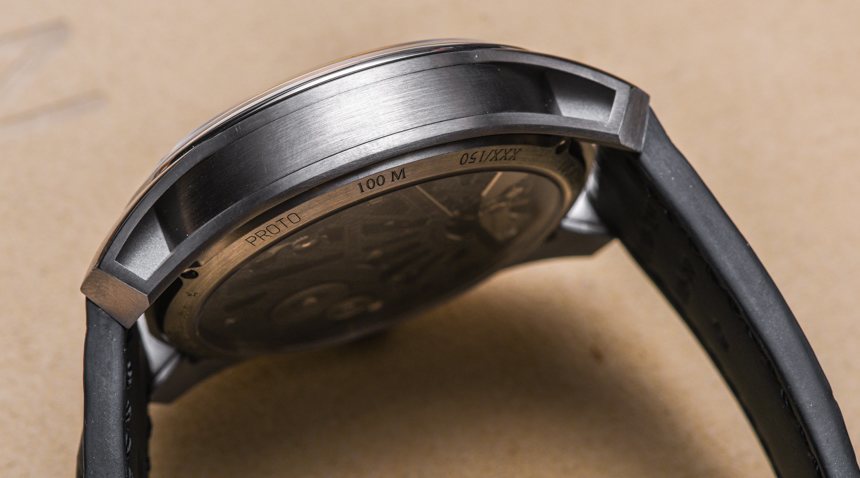 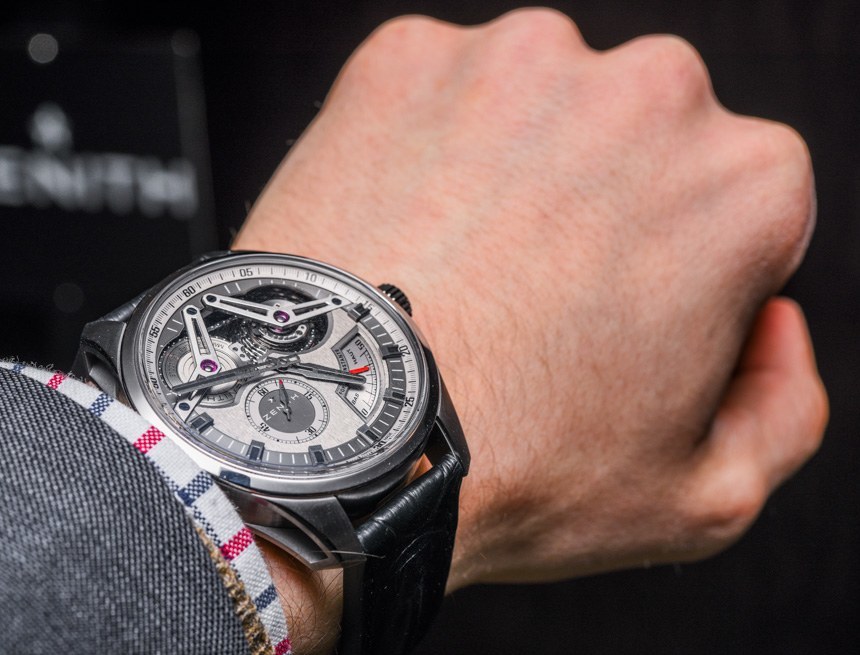 And what of the fusee and chain system on the Zenith Academy Georges Favre-Jacot Titanium? Again, no sign of the gold anywhere. Interestingly enough, if you look closely, Zenith didn’t choose to import the blue star on the dial over the barrel on the left-side. The star is still there, but it is an austere grey rather than blue. However, you’ve got the two blue screws on the thicker, non-wishbone bridges. A wishbone shape, as seen on the gold version, immediately insinuates a feeling of being delicate, but Zenith went for a sturdy-looking bridge on the Zenith Academy Georges Favre-Jacot Titanium. Smartly, they cut the utilitarian look a little bit by adding the blue screws for a dash of color. 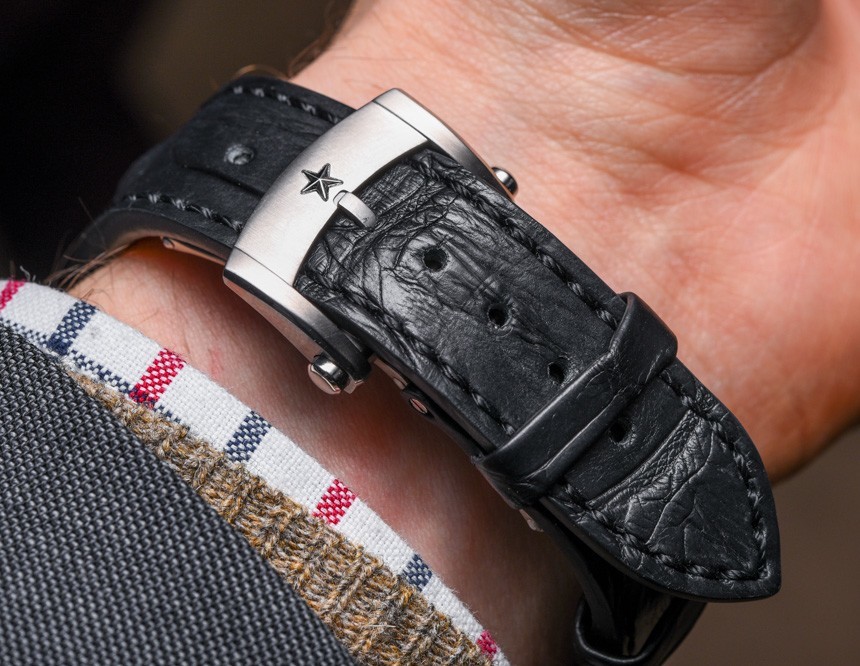 I know it seems I am harping a bit on every small aesthetic change that Zenith chose to make with this watch, but it’s clear that every single choice they made was designed to create a sum of its parts that evokes a very specific response from the wearer. One of the biggest changes (not including the build material) is the power reserve indicator. It looks racing-inspired, with a stark, albeit somewhat flat red hand, rather than the very traditional-looking indicator on the gold watch. You’ll also notice the blue hour and minute hands are replaced by bold titanium hands that do tend to provide a few legibility issues under specific lighting situations. 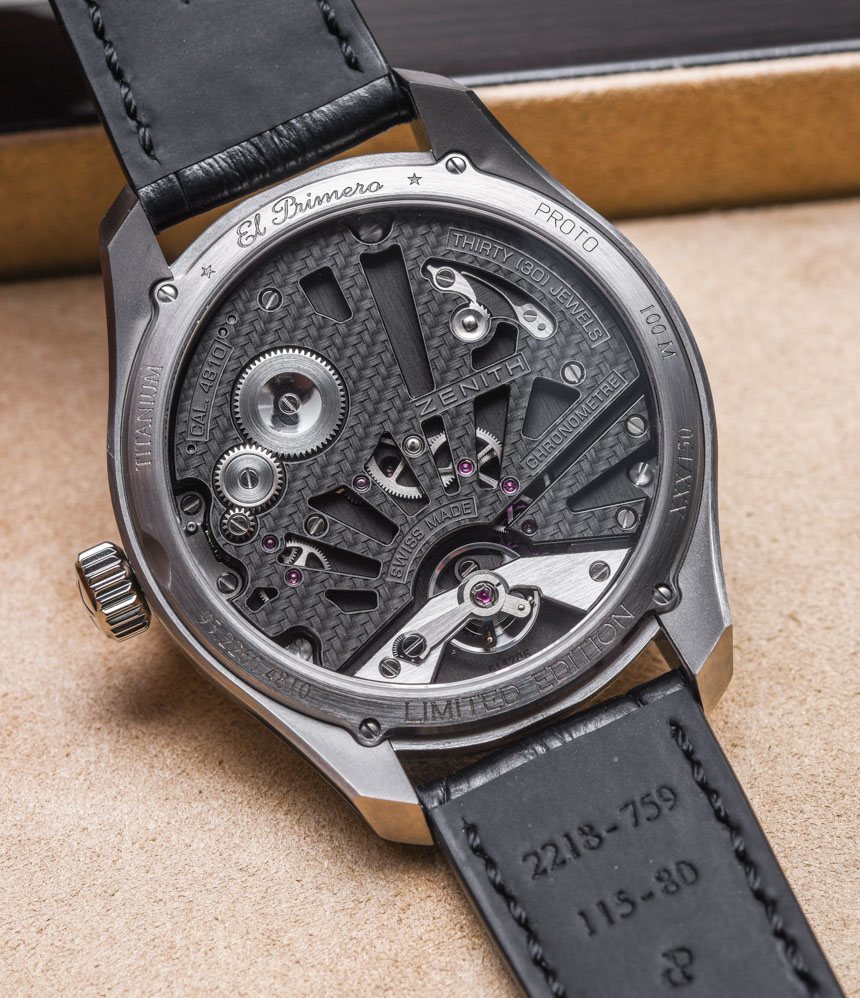 So, what’s next? You guessed it: the caseback! Gone is the three-quarter bridge with gold plating and Geneva stripes. In the Zenith Academy Georges Favre-Jacot Titanium, we’ve got a black carbon, almost basket-weaved pattern adorning the caseback. The semi-skeletonized look shows us bits of the movement, but interestingly enough, there really isn’t that much to look at. Clearly, the main event is the fusée and chain mechanism. 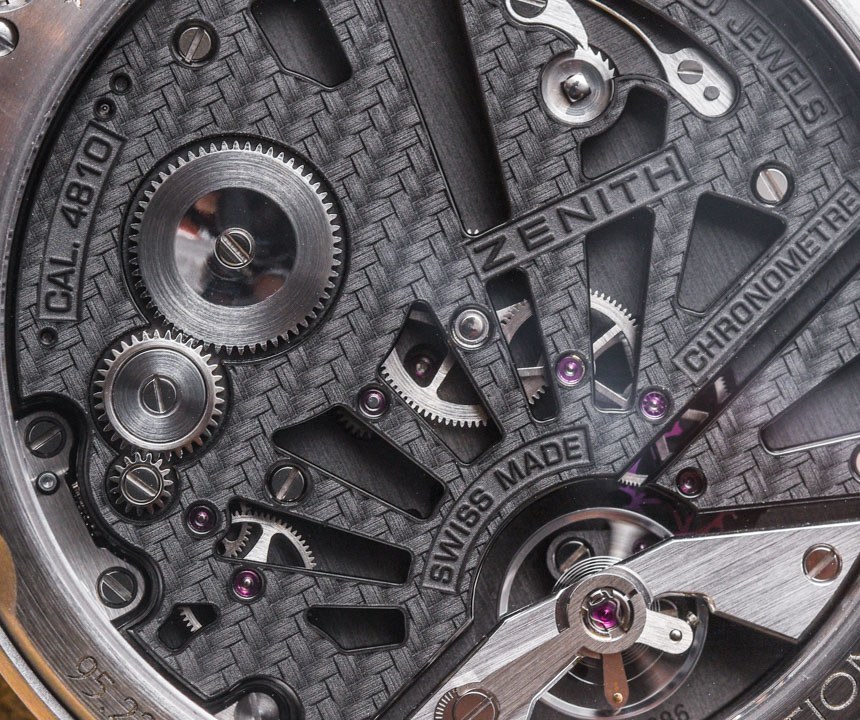 Zenith is a brand with a profoundly distinguished history. The El Primero movement is one of the most lauded movements in history, but the brand does seem to be at a crossroads. However, there are more brands than ever that are creating avant-garde designs appealing to watch buyers and collectors who want something a little different. De Bethune, Richard Mille, and MB&F come to mind when thinking about visually striking brands that are giving many options to these buyers. There is obviously no way that this Zenith Academy Georges Favre-Jacot Titanium watch is going as far in an aesthetic direction as the aforementioned brands, but if we take this watch as a sign of things to come, it is obvious that the brand is looking at adopting and creating more contemporary designs in their watches. 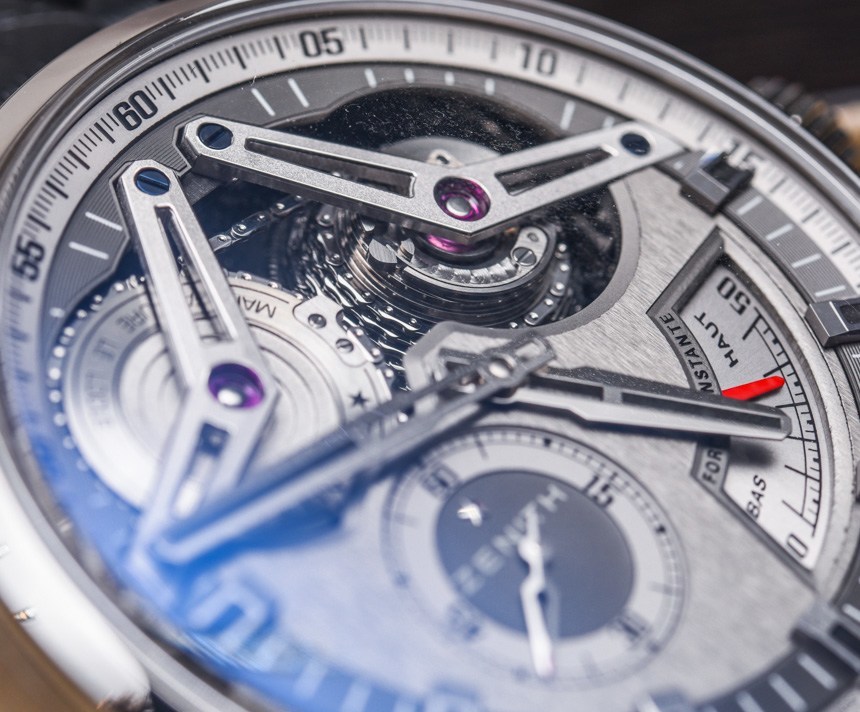 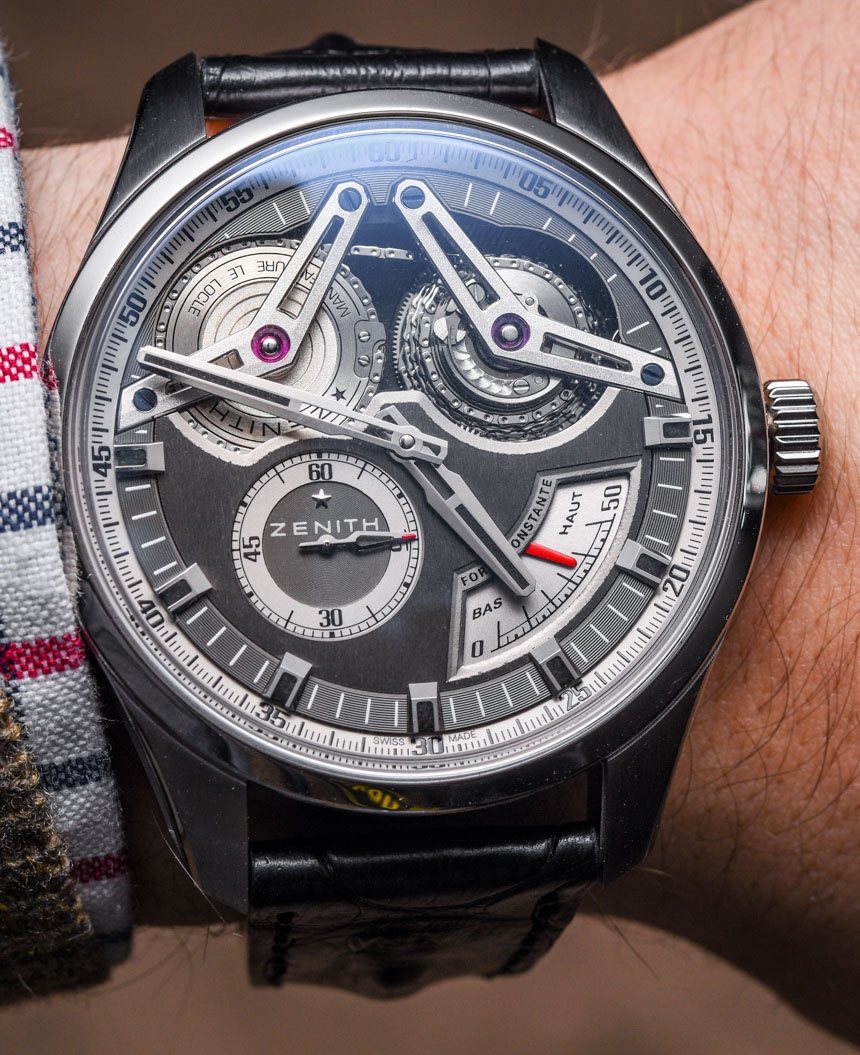 Of course, contemporary watch styles aren’t complete anathema to Zenith. The El Primero Stratos Spindrift Racing watch and the El Primero Lightweight Limited Edition Skeletonized watch come to mind when thinking about a lot of similar design cues. The hour and five-minute markers are clearly influenced by these models, and the aforementioned “basket-weave” pattern in black carbon also comes into play. With a price of 69,000 CHF, the Zenith Academy Georges Favre-Jacot Titanium watch is a successful reinterpretation of the gold watch for a buyer who wants a more sleek and contemporary look. zenith-watches.com