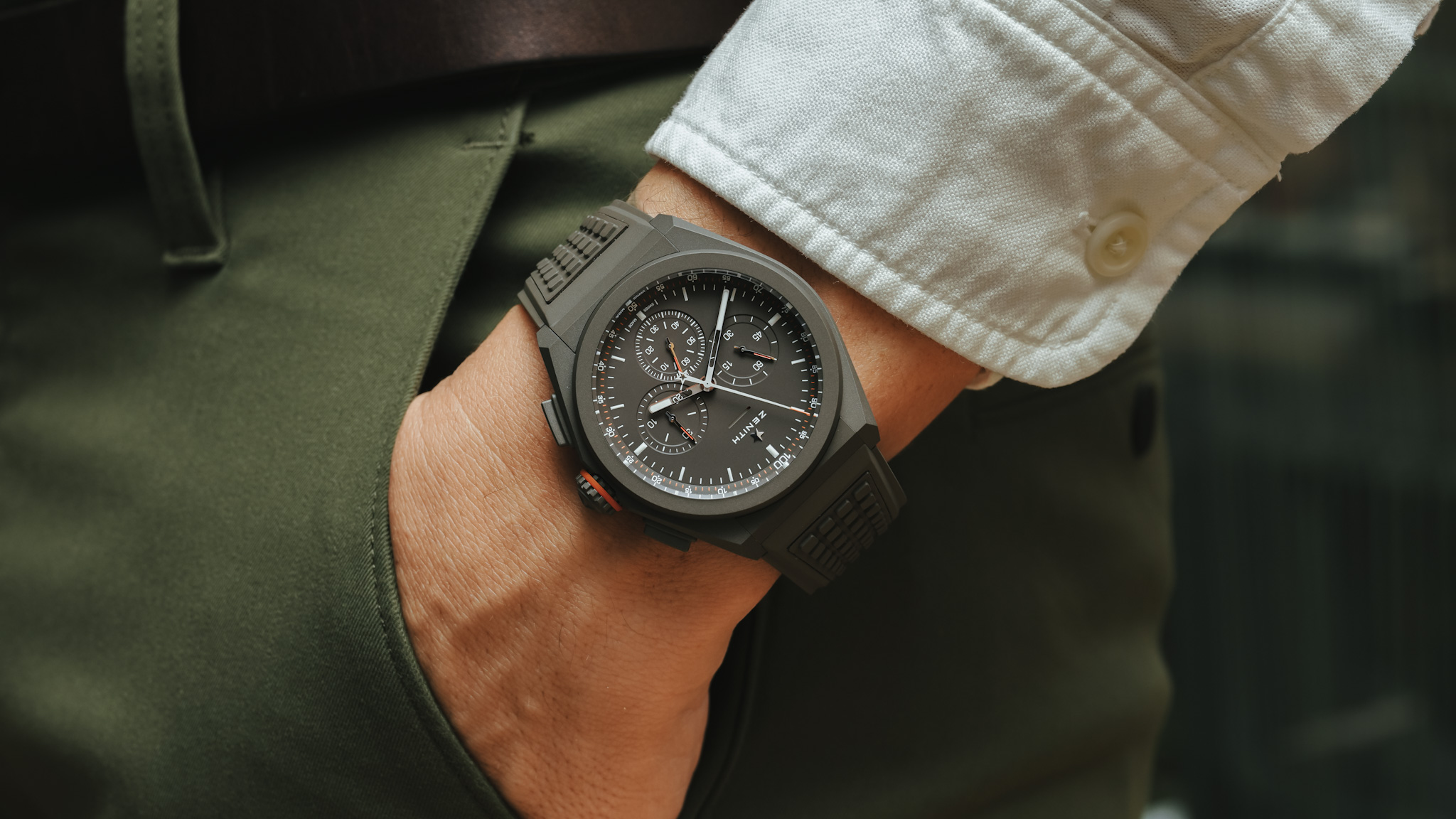 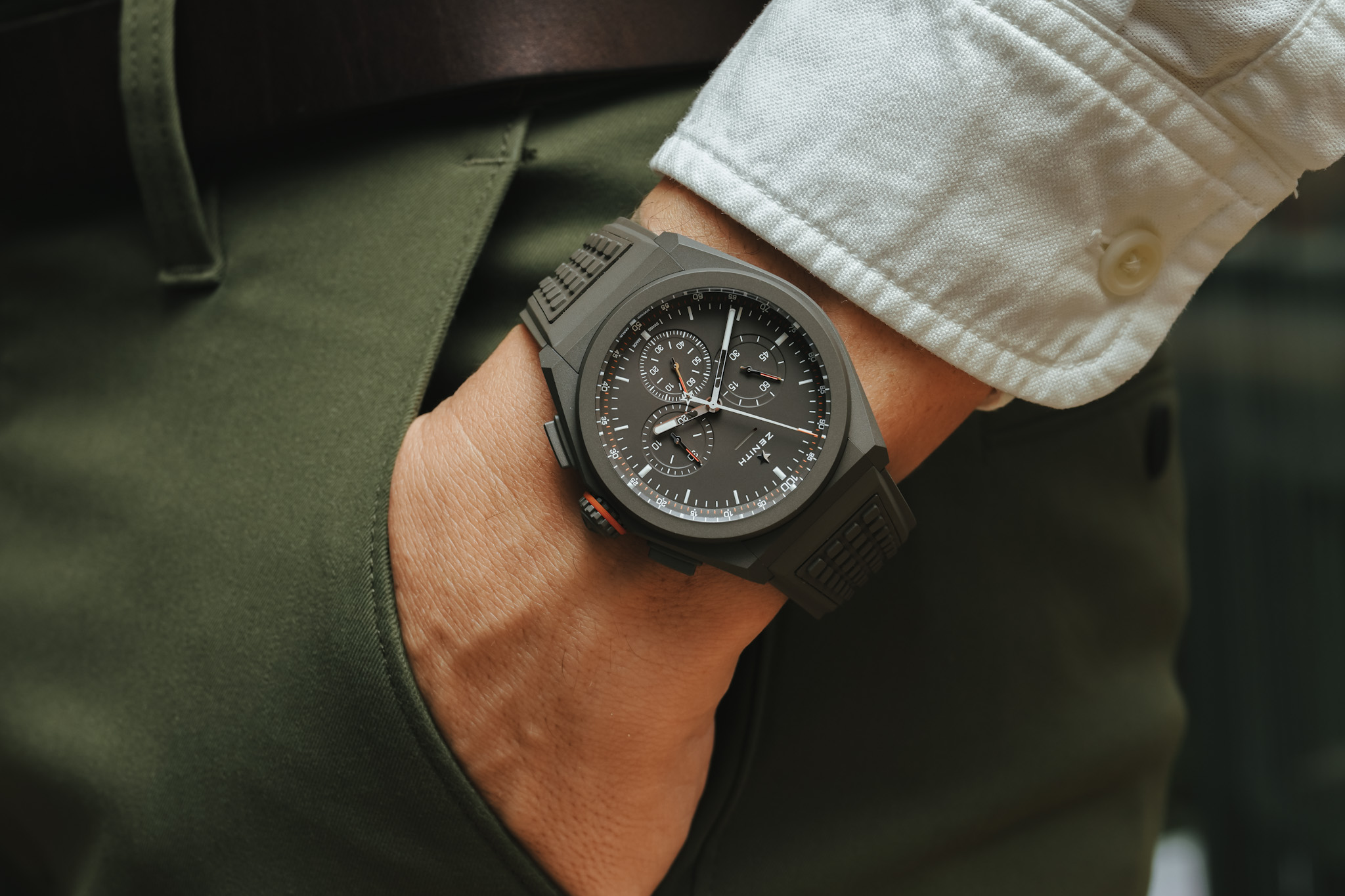 It might seem obvious to most, but before we get too far into the weeds with this thing, it’s worth pointing out that Land Rover and Range Rover are two very different arms of the same off-road vehicle company. While the former is the flagship workhorse under which the iconic Defender is produced, the latter is its more modern, luxurious sibling, tailored for adventurous urbanites in the white-hot crossover SUV market. With that out of the way, I can comfortably say that the Zenith x Land Rover company collaboration (which is now in its fourth generation) has long remained one of my favorite capsules in the watch world, as it routinely provids an *ahem* vehicle for some extremely neat ‘sport-luxury’ interpretations of otherwise classic Zenith watches. However, 2020 marks the first time Zenith has produced a collaboration inspired by the Land Rover — and if you’re a fan of the new 2020 Defender, boy are you going to like this one.

Introduced at the LVMH Group’s new Dubai showcase concept back in January, this new Defy 21 adheres to the Land Rover’s classical design cues with a very interesting “super-matte” tool aesthetic that’s a stark contrast to the “rugged-chic” design sensibilities that defined the earlier Range Rover editions. However, the co-branding in those older watches always received mixed reviews from watch fans and car fans, alike. To wit: 2016’s inaugural black ceramised aluminum Chronomaster edition straight-up said “Range Rover” on the dial under the Zenith wordmark, but this was rectified in its 2017 follow-up — a stealthy black (again, ceramised aluminum) Chronomaster with copper accents, inspired by the luxurious Range Rover Velar, and bearing only a custom rotor and engraving on the caseback. 2018’s Defy Classic based on the Evoque was again oh-so-close, but its open-worked dial was designed to look like the cutaways on the Evoque’s futuristic rim and, again, might have turned away potential collectors. I personally love the Defy and would have been thrilled for a non-skeletonized silver dial in this collab, but it does little to diminish the fact that it’s still a visually striking watch. 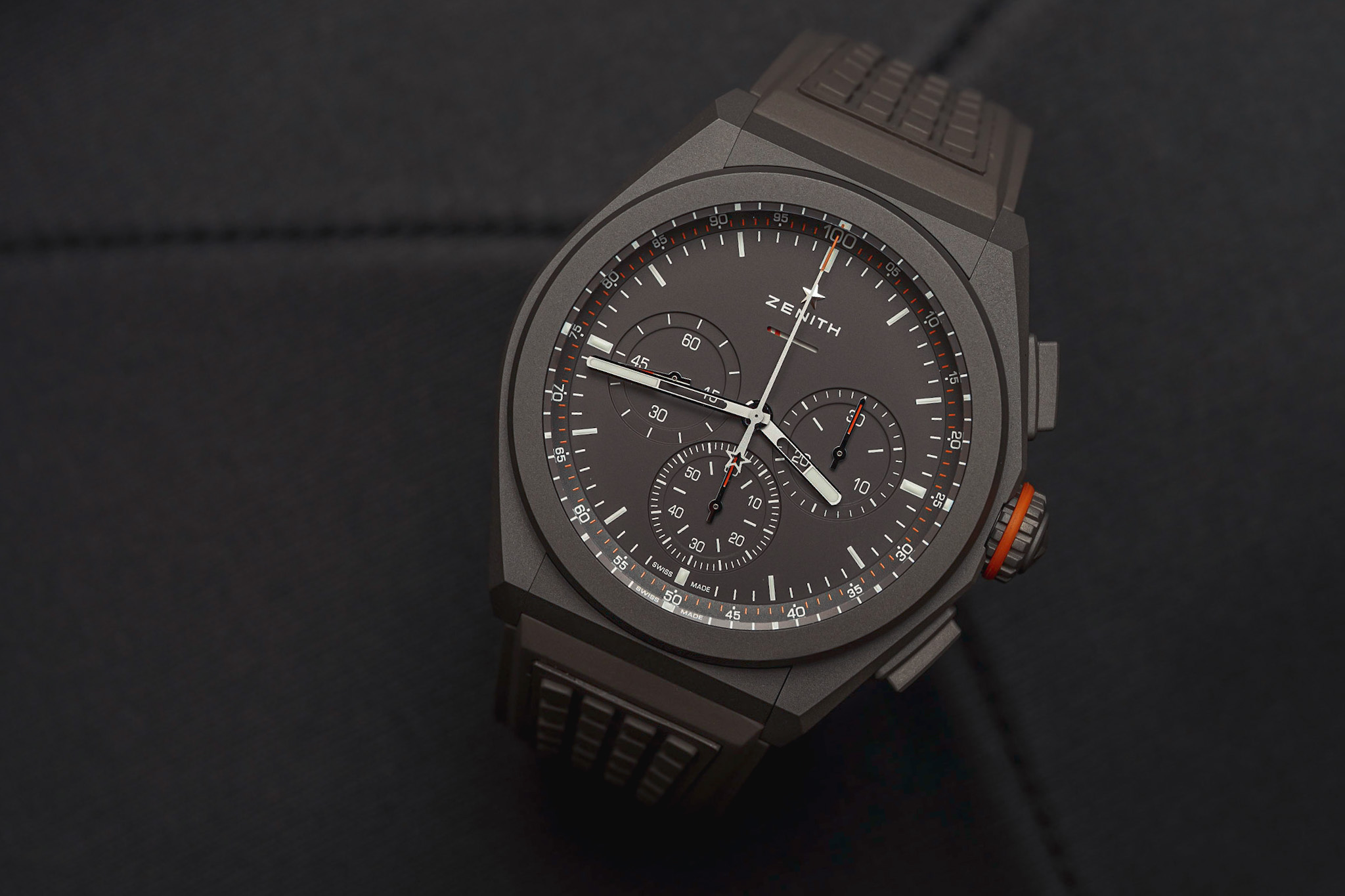 2020 seems to be a return to form for the ongoing series with the new Defy 21 Land Rover — a watch that moves away from the sport-luxe Range Rover (which, remember, is more of a luxury SUV than a true workhorse vehicle) platform as its source material, and into the shoes of the original adventuremobile: the iconic Land Rover. Naturally, if you strip away all of the Range Rover’s many embellishments, you’re left with one of the most rugged workhorses of all time — and that’s more or less what Zenith has done with this particular release; they’ve taken the classically purpose-built, no-nonsense spirit of something like a Land Rover Defender 90 and bottled it into a sparsely branded, micro-blasted titanium case replete with matching dial. Now, there’s certainly no shortage of rugged titanium watches already out there, but the all-matte-everything treatment on this particular edition lends it a really interesting aesthetic that’s more visually in line with a matte gray ceramic or carbon case — except you get all the reassurance of durability that a proper modern metal case can afford. And the whole thing isn’t just ultra-light on the wrist, it’s dramatically muted and extremely visually stark — and I mean that in the best possible sense. With the exception of the caseback, where there’s again a minimal co-branded wordmark and a cool custom rotor shaped like the new Defender rim, there’s otherwise very little indication that this is a special edition of any sort, which is great for watch fans who might not (yet) also be Land Rover owners. 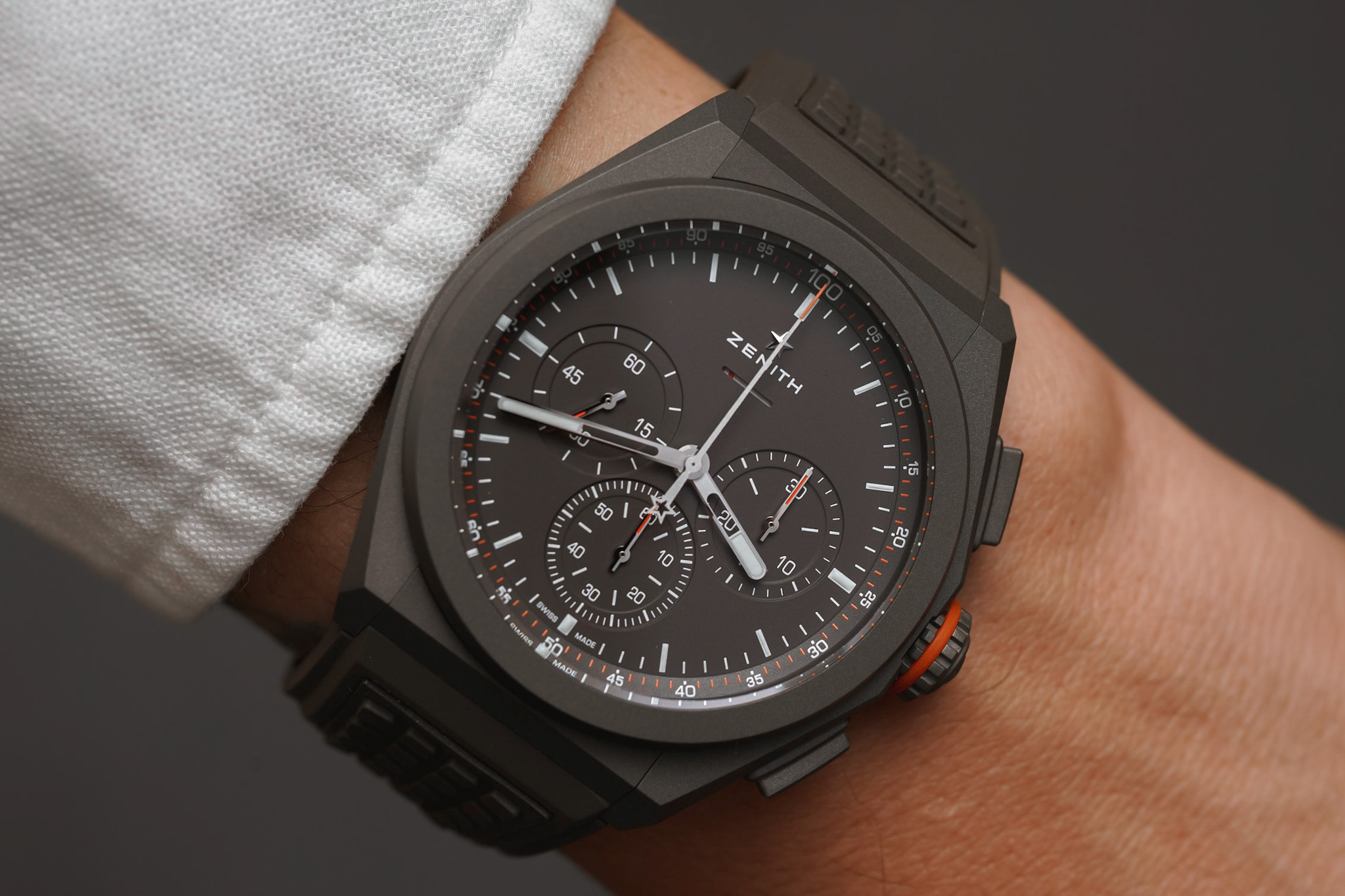 Just don’t let the 44mm dimensions get to you — as we’ve pointed out before, the modern Defy 21 case hides some relatively compact lug-to-lug measurements, enabling this particular variant to wear comfortably on my 6.5” wrist. Furthermore, those modern dimensions are also shielded behind the lightness of the case and the absence of any polished surface anywhere, which otherwise tend to amplify a watch’s presence on the wrist, no matter the size. Now, there aren’t currently many offerings in the Defy 21 collection with traditional dials, but this is certainly one of them, and it serves as a nice reminder of just how purposeful the El Primero 9004 high-beat chronograph movement can be when it’s given a canvas that puts a premium on utility and legibility. In this instance, all the markings on each totalizer are clear and crisp, enabling easy reading even while the chronograph hand is whipping around the dial — don’t forget this is a 5 Hz high-beat chronograph with the ability to measure splits as precise as 1/100th of a second. Even with all that power-sapping frequency, though, the 9004 maintains a 50-hour power reserve, which is subtly laid out at in a sleek, horizontal groove at 12 o’clock on the dial. This is actually the Defy 21’s first linear reserve indicator, a complication that, in this line, has traditionally been indicated by a separate external hand. 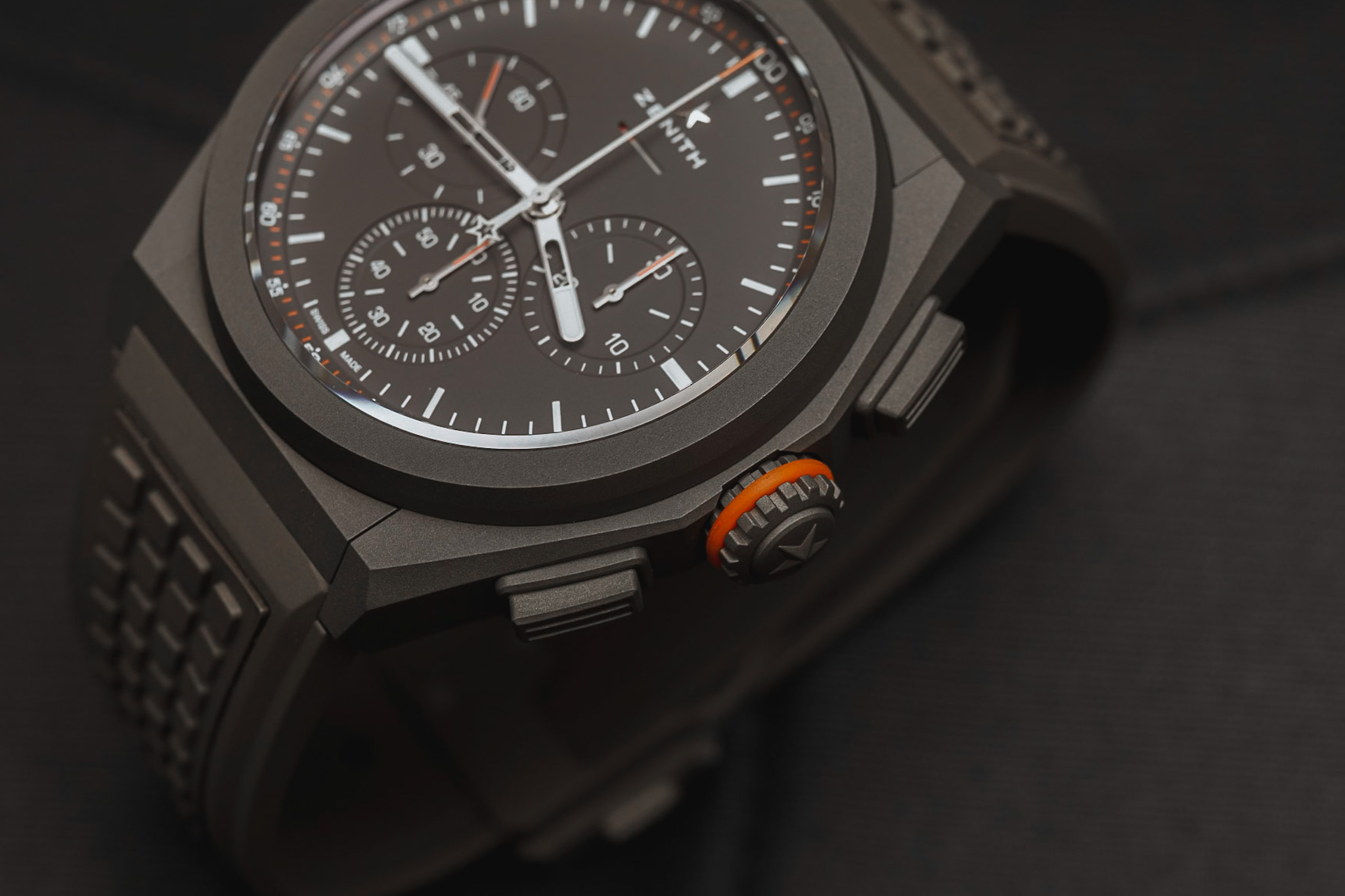 I personally really enjoy the Defy case (in both the Defy 21, and the smaller Defy Classic variants), though I’d argue it is really at its best when its many intersecting surfaces and angles are each contrasted with varying brushed and polished finishes. The Defy remains one of the most impressively finished luxury sports watch cases available at this price point (especially in ceramic), so I’ll admit that when all of the alternating finishes are stripped out, you’re left with a dramatically different product. Luckily, though, this visual style still works quite well for the bolder Defy 21 platform, which already has a matte black forged carbon case and several other exotic treatments, so it doesn’t feel terribly off-brand. Had this edition been rendered in the more classic Chronomaster case, I’m not sure it would have worked anywhere near as well. But here, with the Defy’s broad facets and sharp-edged intersections rendered in this cool “castle gray” color of the blasted titanium, the design’s raw architecture shines through, and you’re able to really appreciate just how well rendered the case is at its very core. With such character and intent laid bare, is all this simply an allegory for the adventurous virtues of the Land Rover itself? Perhaps. Maybe that’s a little too on-the-nose. Just try not to over-think it — at the end of the day, fans of exotic tool watches or high-end knives rendered in tumbled titanium are going to really like this one. 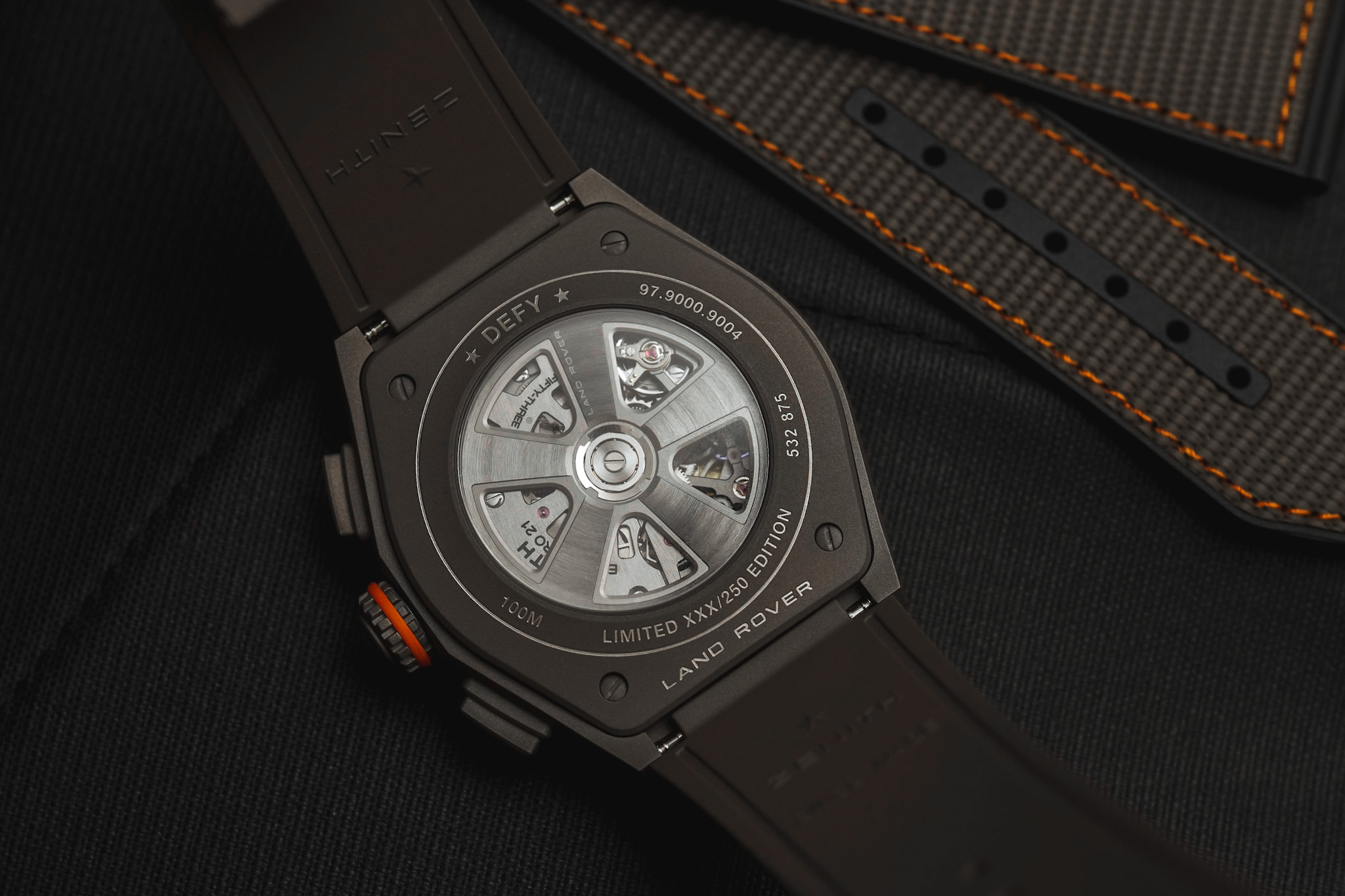 The watch ships with two straps: one, a dark gray waffle-textured rubber strap that carries the overall package’s monochromatic theme quite well, and the other, a brightly colored affair featuring stitched nylon fabric against a rubber core that gives the whole watch a little more personality and color contrast. Thankfully, it’s these light orange details matched to elements on the dial and the rubber-ringed crown that preserve the watch’s sporty character and keep it from being an overly sober experience. I’d imagine that this is a watch that would also look excellent on a hearty suede or tan Horween leather strap — anything to accent those orange touches while preserving the tough, sporty character. 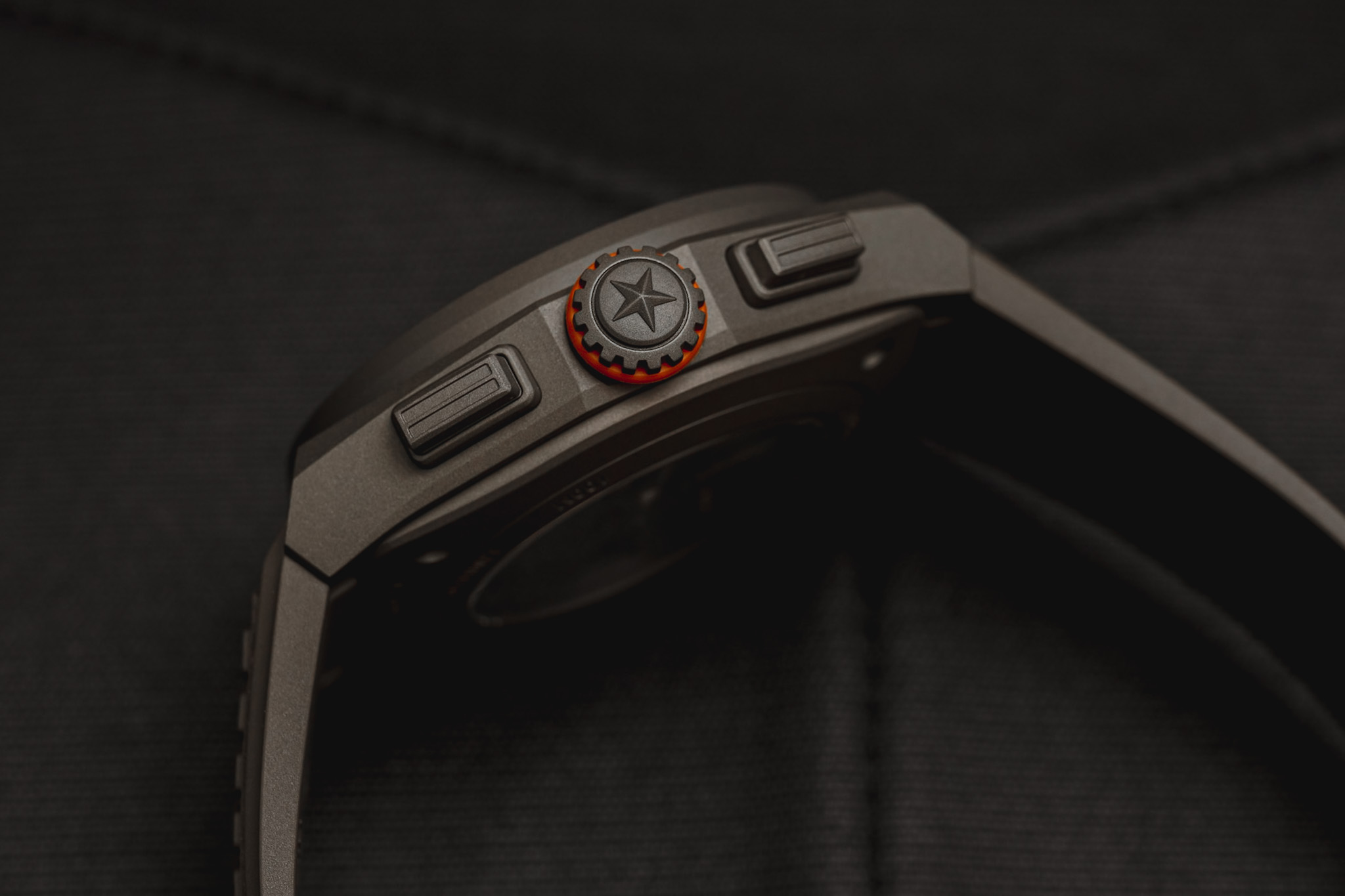 The Zenith Defy 21 Land Rover is limited to only 250 pieces and will have a price of $14,278 when it becomes available later this year. For more information, hustle over to zenith-watches.com. 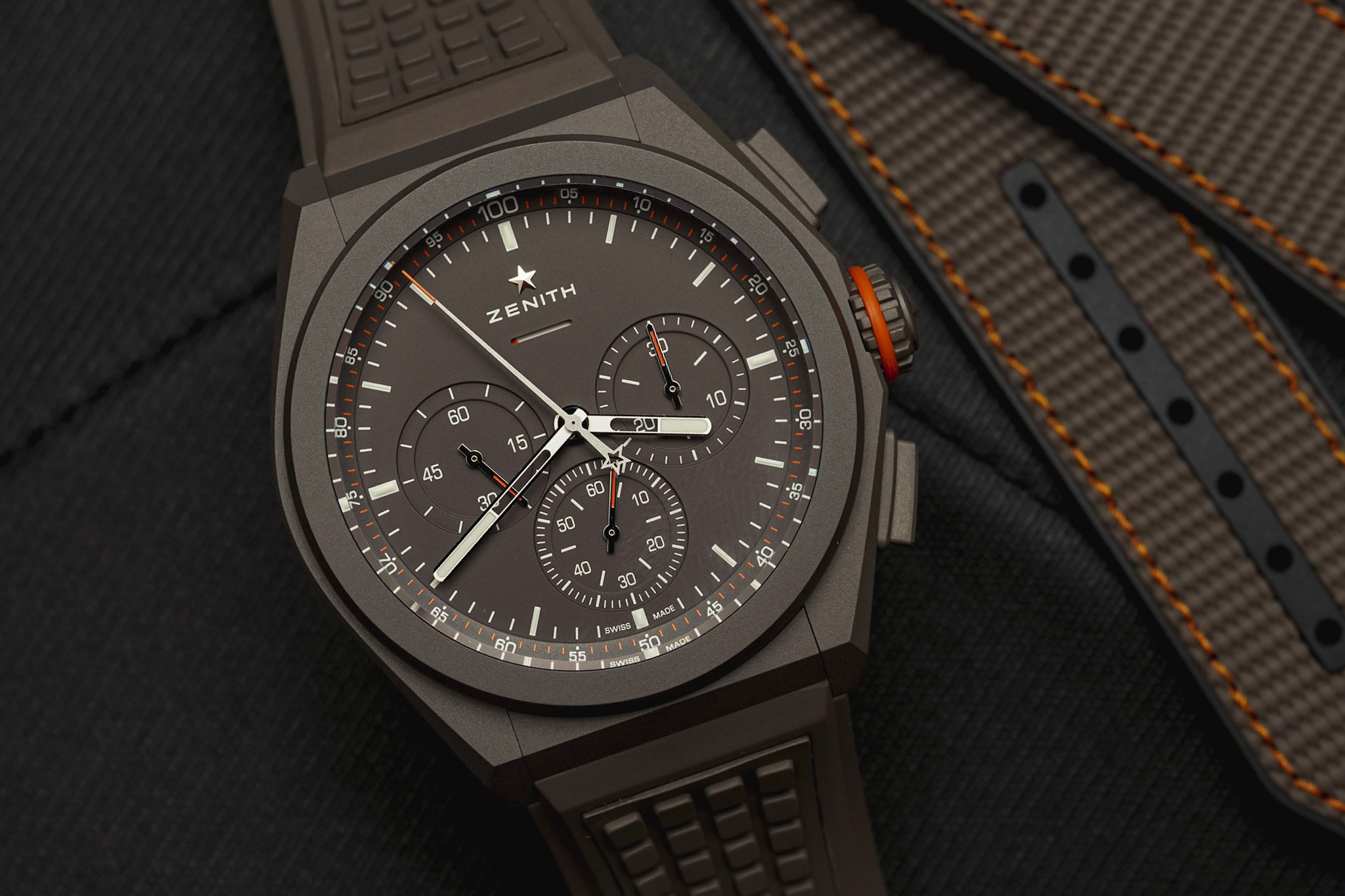