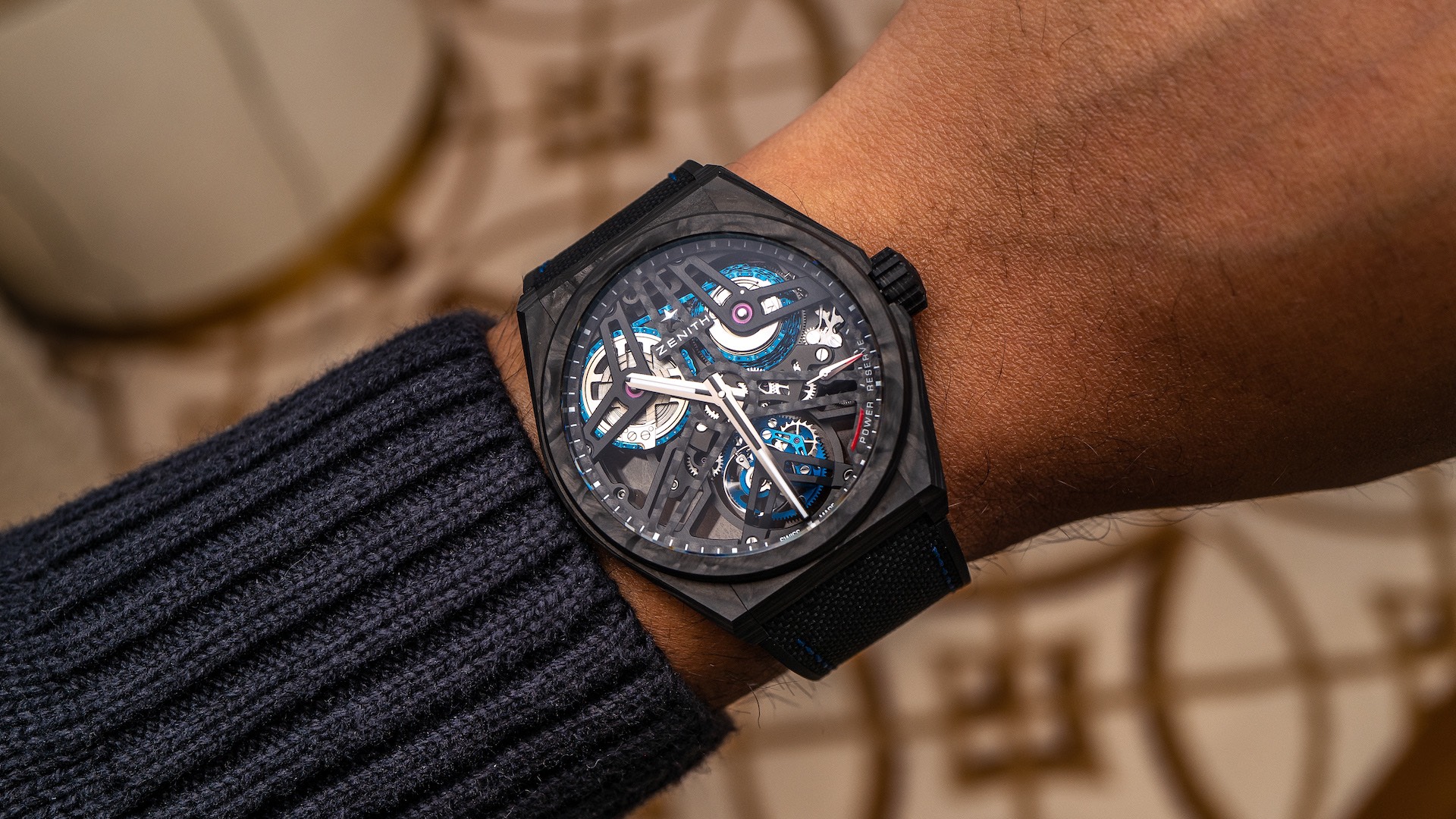 The Zenith Defy El Primero Fusée Tourbillon is a sight to behold in black carbon, with the blue steel fusée chain and tourbillon housed within the architecturally striking skeletonized dial. The recent Zenith Defy Lab and Defy Inventor 18Hz watches showed the brand flexing its innovation muscle through high-frequency movements. This Defy Fusée Tourbillon goes in an interesting direction by taking the thoroughly contemporary Defy style while housing a centuries-old and highly impressive mechanism inside. The fusée and chain concept isn’t new to Zenith, but throwing in a tourbillon is a great “why the hell not” move. 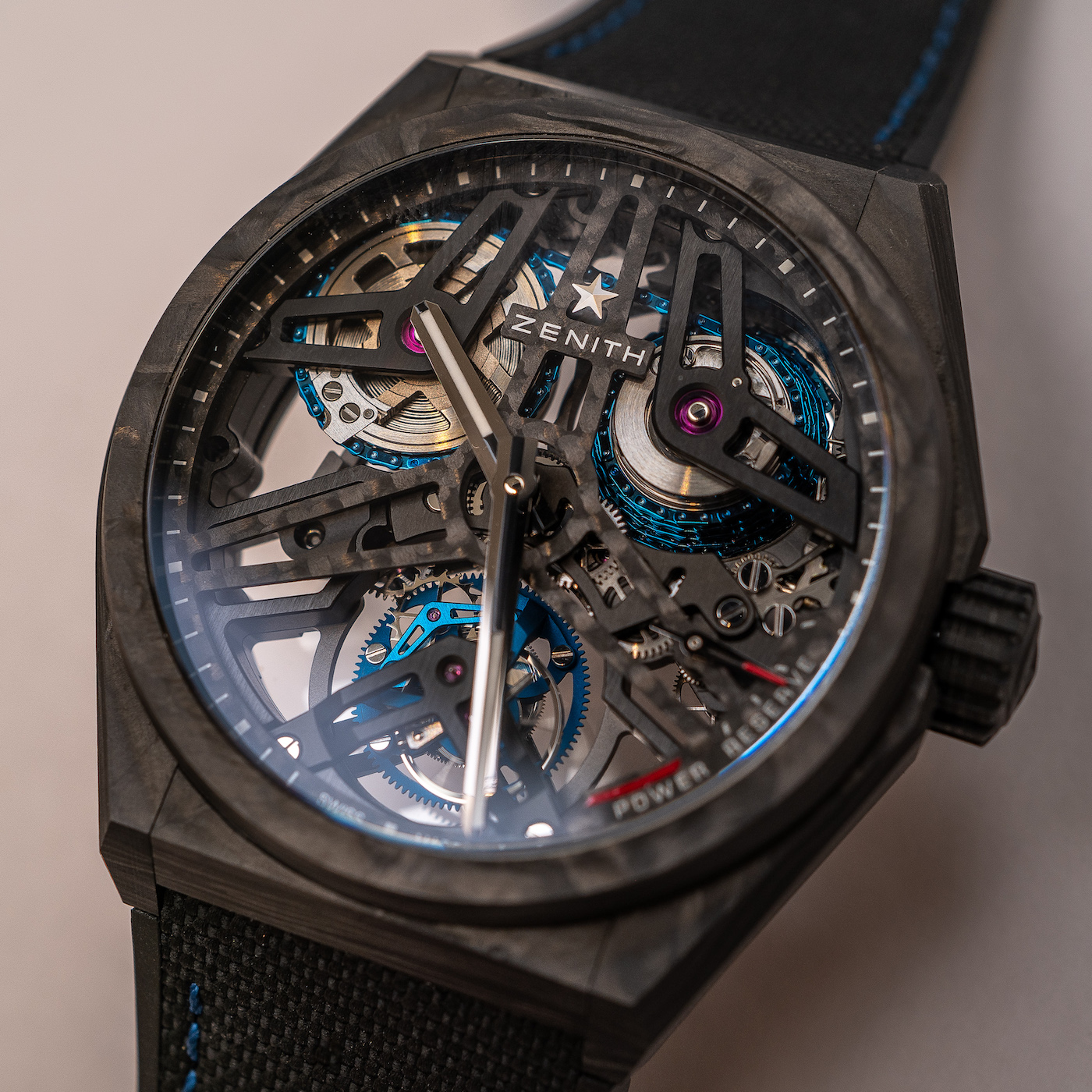 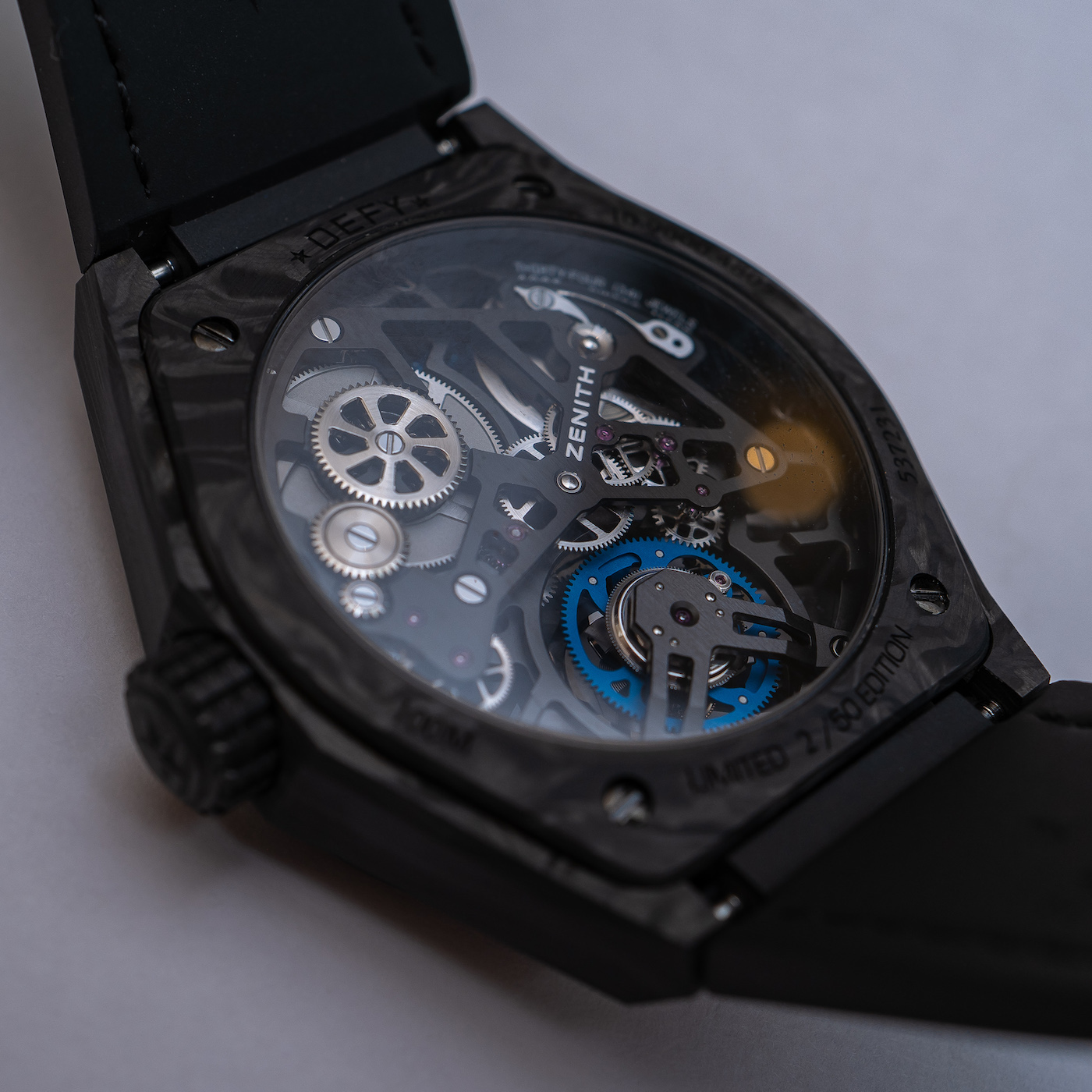 The purpose of the fusée and chain mechanism is to help the mainspring barrel maintain steady torque rather than weakening as it continues to operate. The fusée, located at 2 o’clock, is just a conical pulley that has the chain coiled around it while extending across the dial and wrapping around the mainspring barrel. Rather than reexplain the intricacies, below is our explanation of the mechanism in our discussion of the Zenith Academy Georges Favre-Jacot watch: 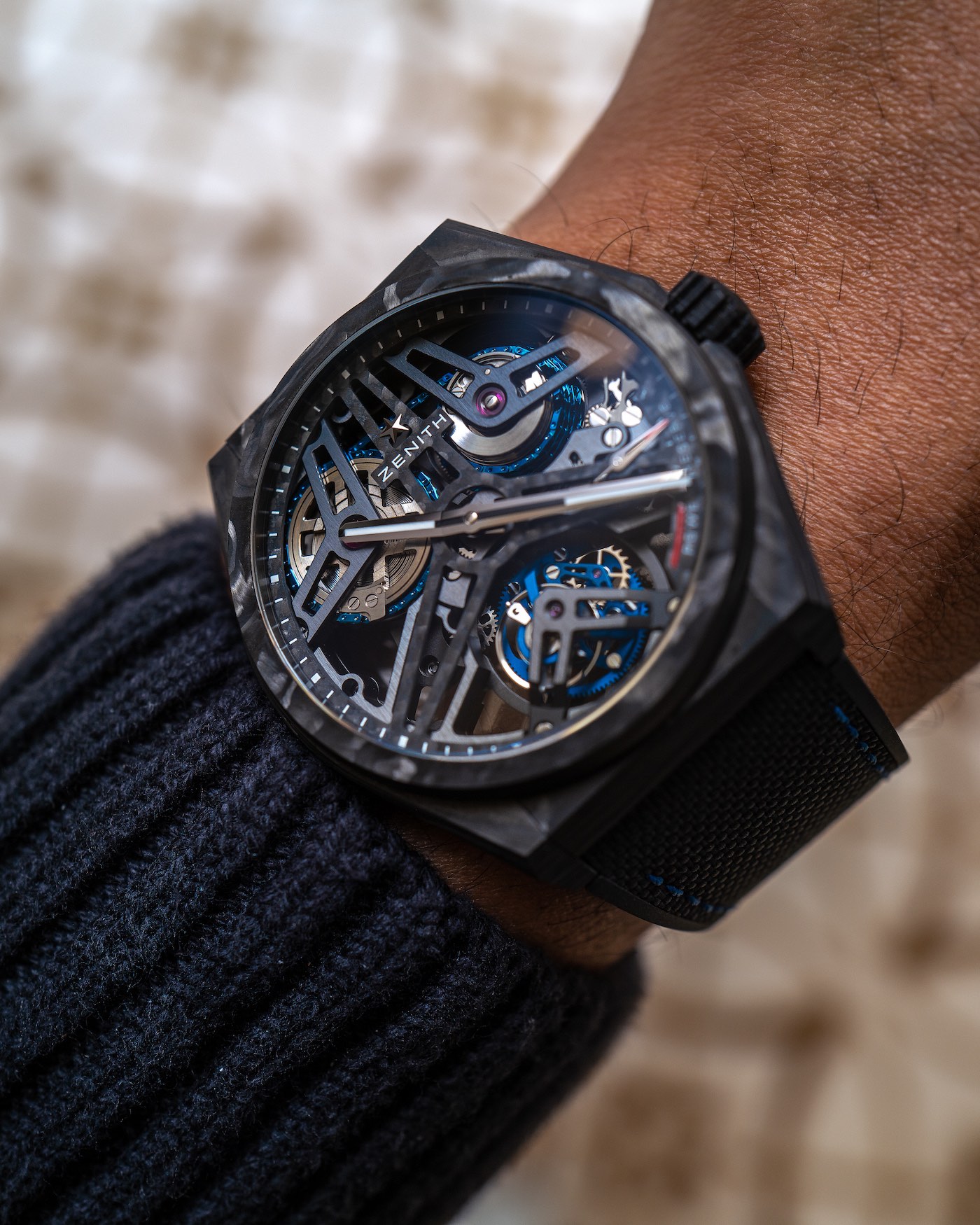 It’s simple in theory, yet obviously, a visually impressive and technically complicated mechanism to pull off, and not many brands can do it. The chain itself is made up of 575 pieces that are hand-assembled, and according to Zenith, it’s the first blued fusée and chain system, which is a pretty believable boast. 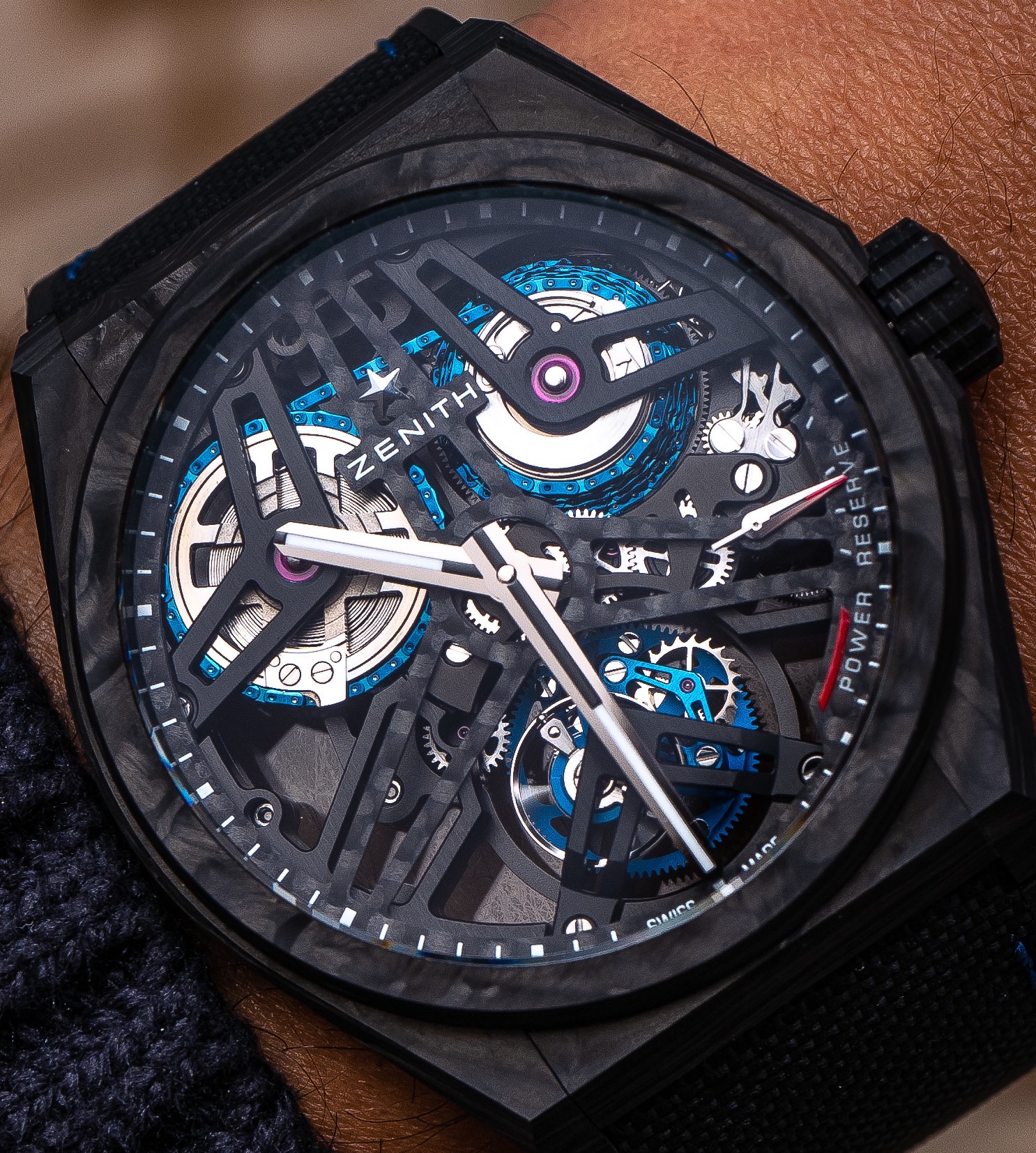 Looking at 6 o’clock, the one-minute tourbillon with off-center balance wheel is also done in the really quite striking blue. It’s all very impressive and is another piece of the 807 component manual-wind El Primero 4805SK movement that operates at 36,000 vph and has a 50-hour power reserve. The tangible benefits of the tourbillon and fusee and chain mechanism are amorphous, but that’s not why they’re present. They’re there because they can be and because Zenith can make a contemporary sport watch that houses some of the most old-school, highly complicated mechanisms in watchmaking history. 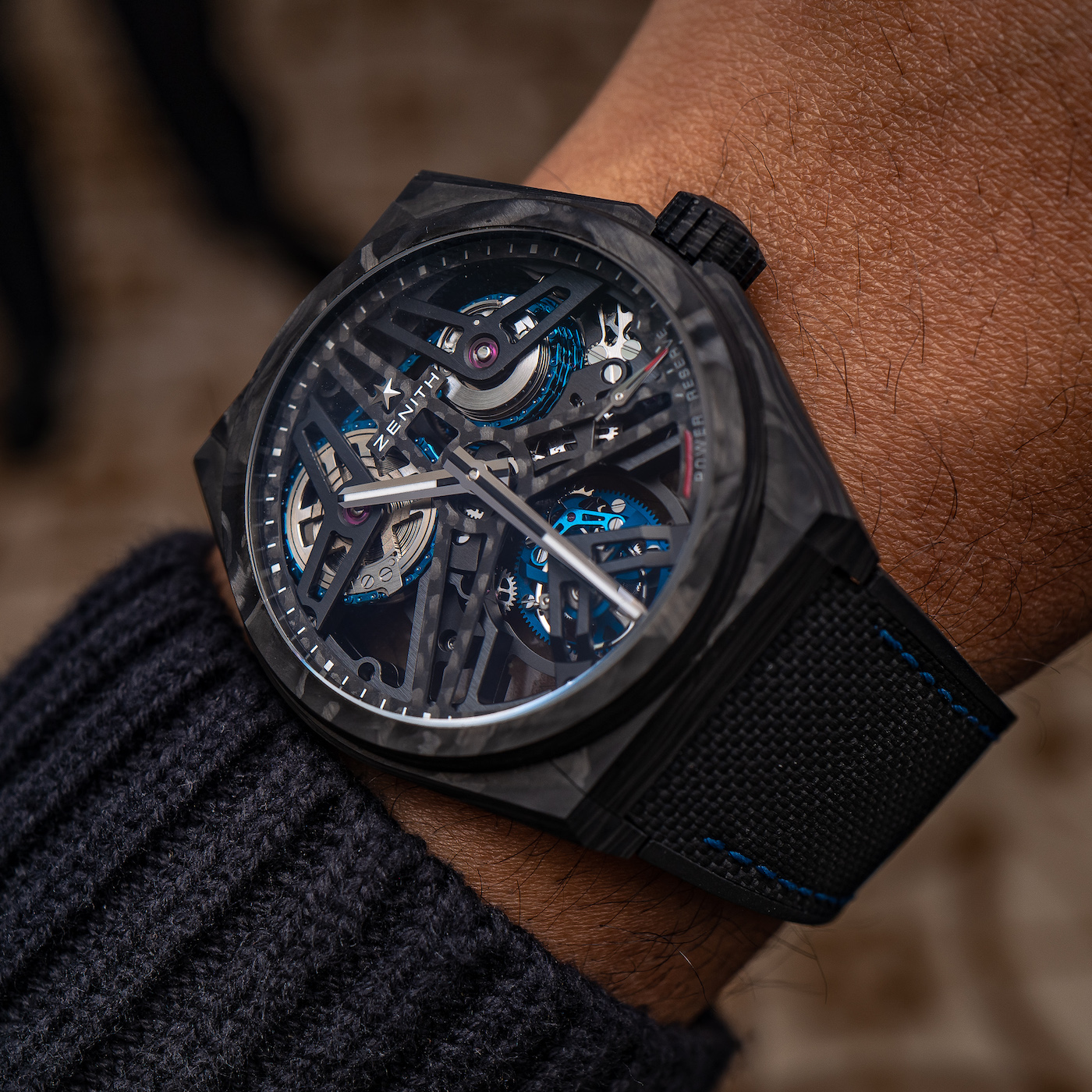 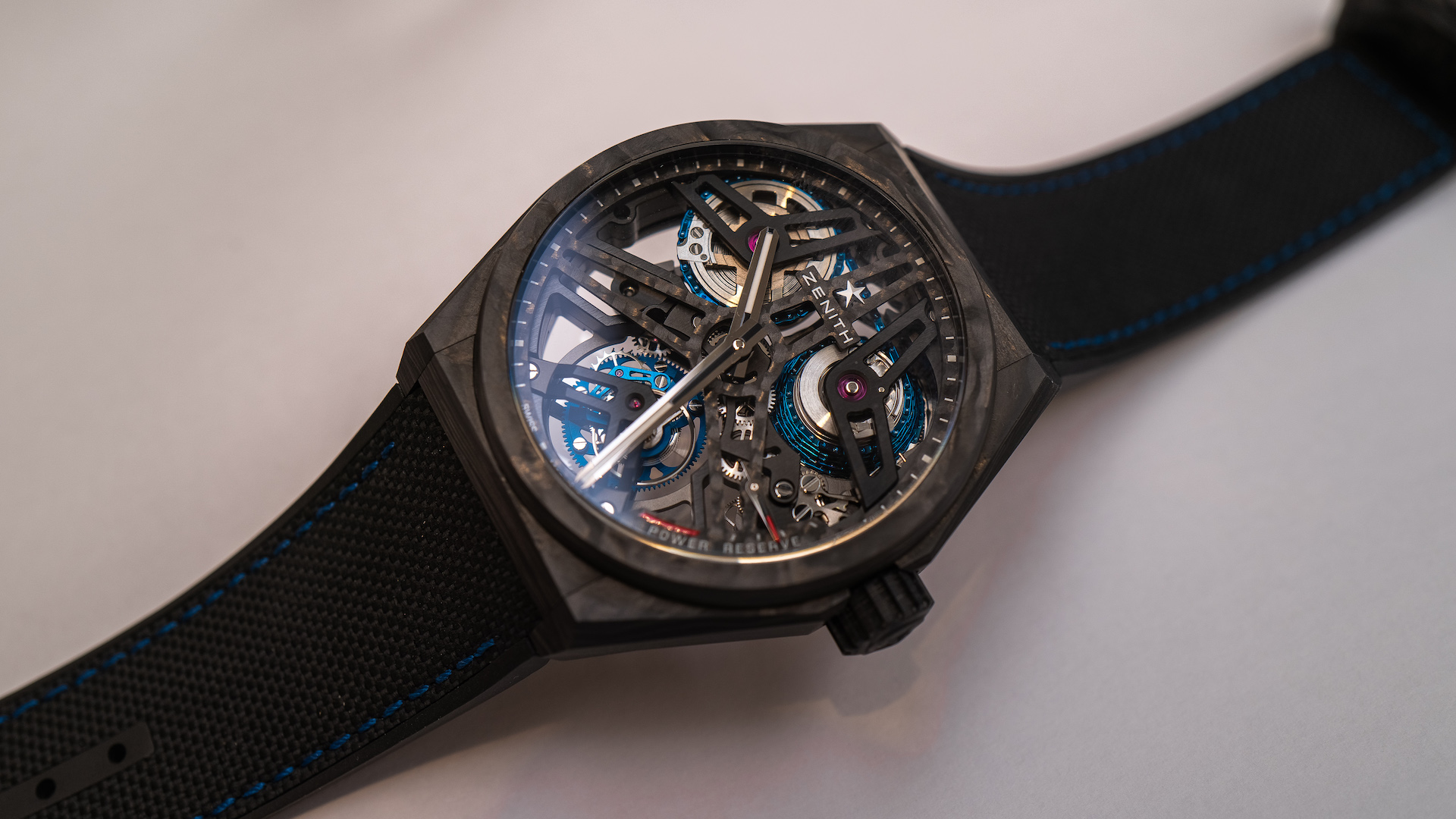 I haven’t forgotten the fact that it’s all skeletonized. The Defy El Primero Fusée Tourbillon comes in black carbon, as well as platinum, but having only seen the former, that’s the model I’ve been referring to and that you see in the photos. Between the central spoke and three bridges for the tourbillon and fusée and chain mechanism all done in black and carbon fiber, reading the hour and minutes hands isn’t the easiest thing in the world, though the lume goes pretty far in helping with legibility. It sounds almost silly to point out the specifics of legibility here because, let’s be honest, telling the time isn’t why you buy this watch.

What does stand out and is pretty easy to spot on the dial is the red power-reserve indicator at 5 o’clock. True, it’ll get a lot of use with just a 50-hour power reserve but the burst of red on the dial is a nice visual addition. 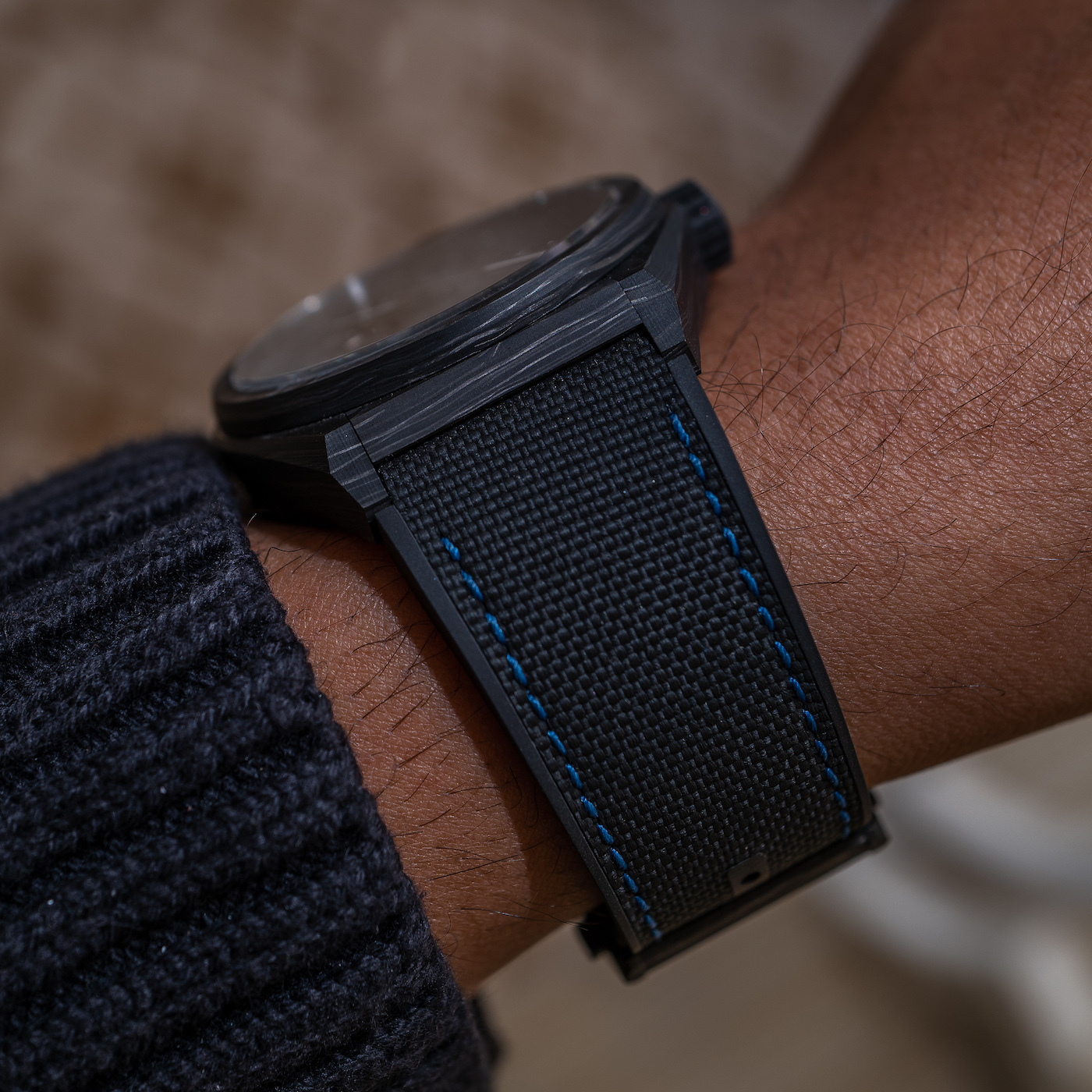 I’m a huge fan of sportier, non-leather straps and the black rubber Cordura-style strap on the black carbon is no exception. The 44mm-wide case in black carbon is super-lightweight, to the point that it’s almost surprising at first. I assume the same can’t be said for the platinum model, though. 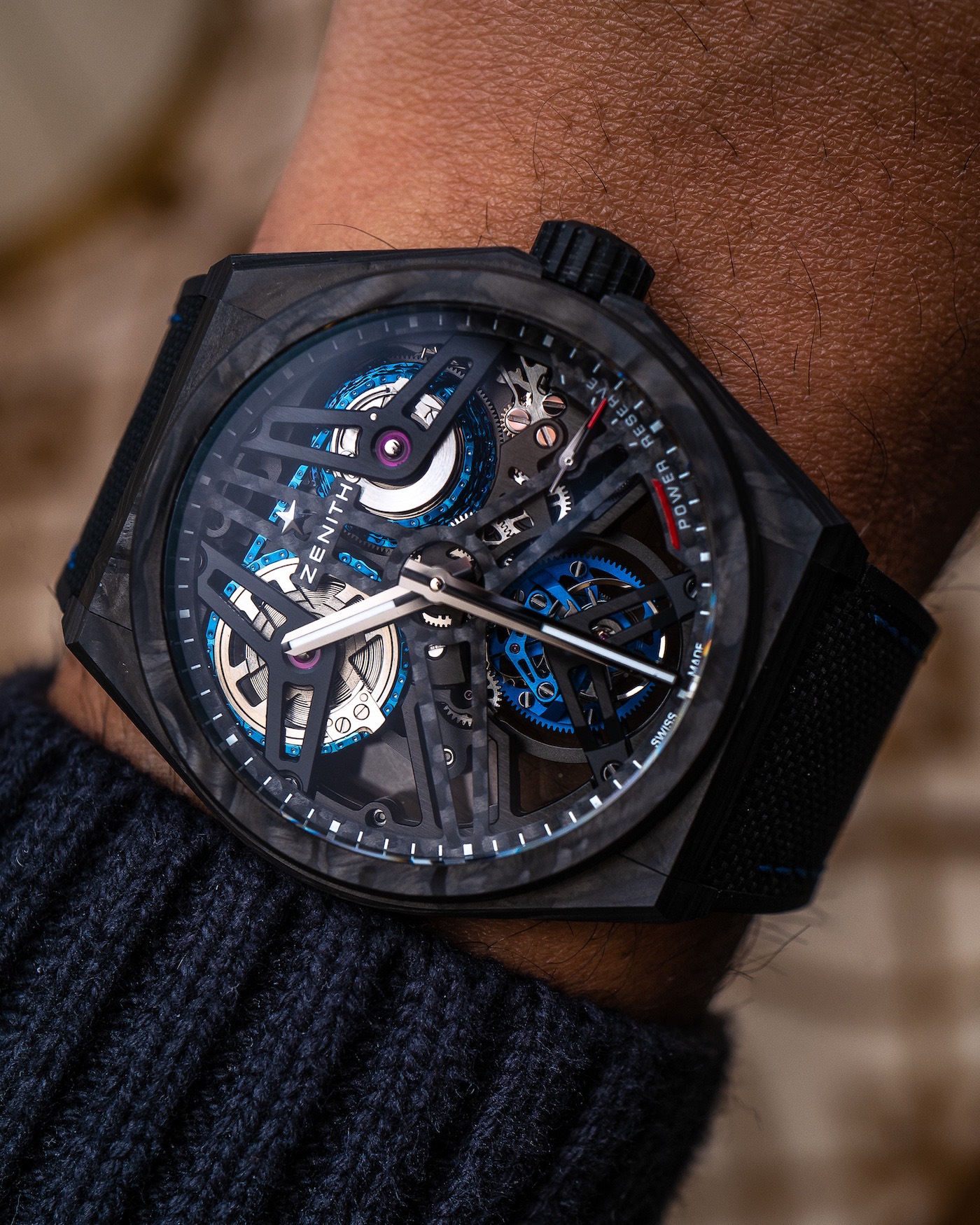 Zenith is making 10 pieces of the Defy Fusée Tourbillon in platinum, priced at $102,500. There are a few more in black carbon, with each of the 50 pieces of these made priced at $80,100. You can learn more at zenith-watches.com.