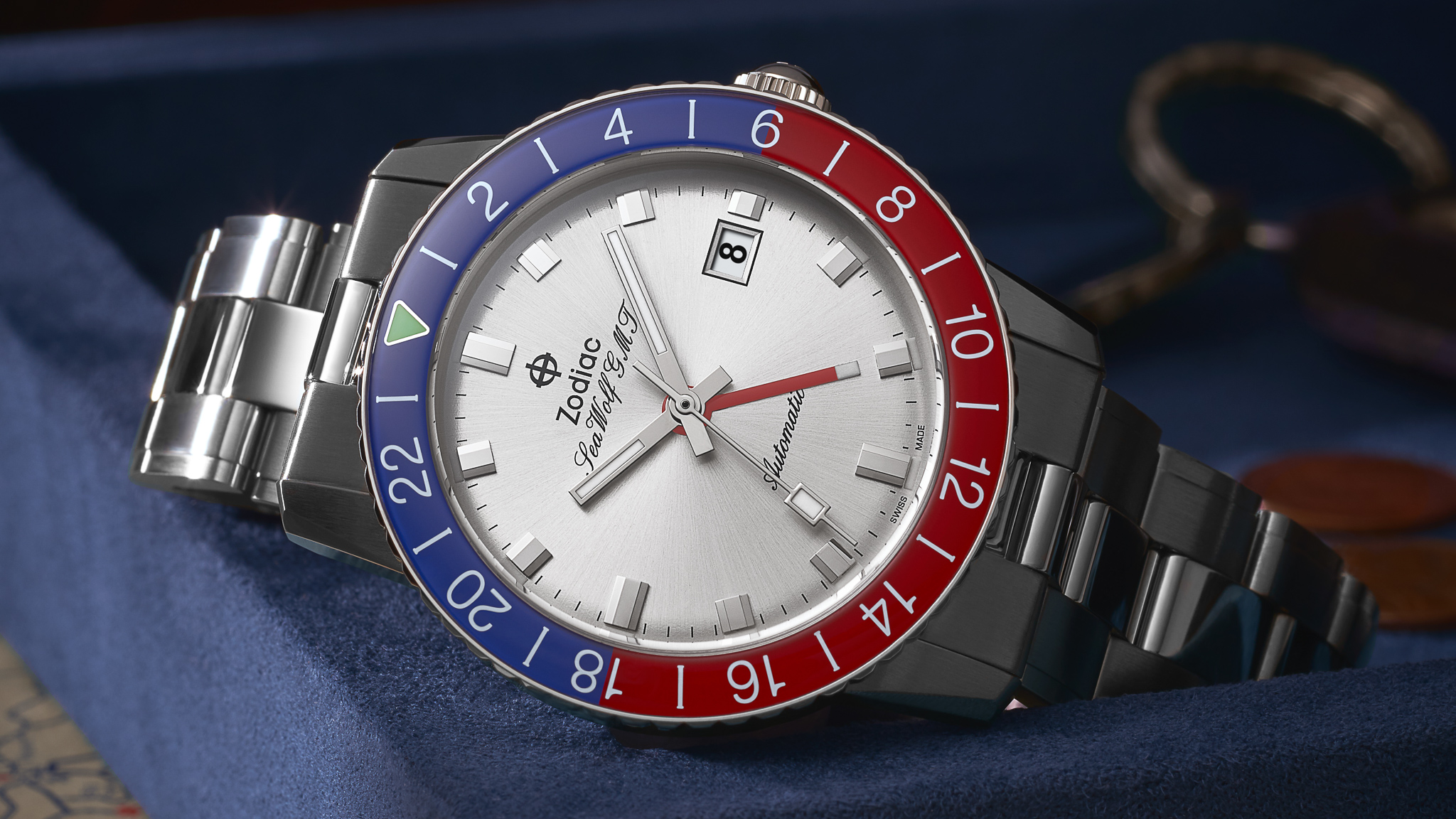 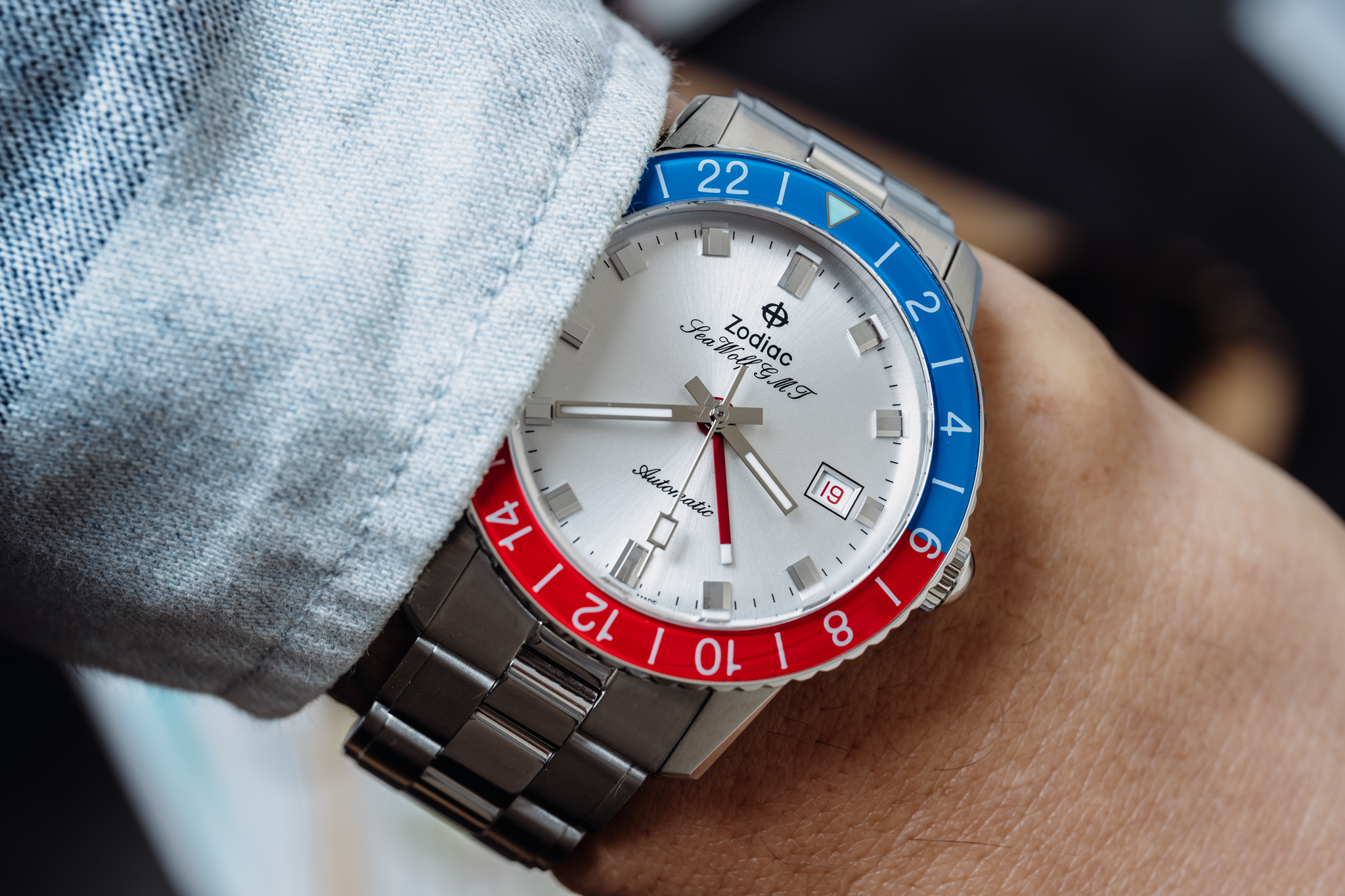 As the legend would have it, Zodiac’s fanbase is a pretty outspoken one, and apparently, the Sea Wolf GMT re-issue configuration that everybody’s been waiting for wasn’t actually the super-hot silver & orange “Creamsicle” from last year but instead this one: the brushed silver dial with the classic red and blue bi-color bezel, which could be considered one of the most aesthetically faithful tributes to the source material that Zodiac’s produced yet, and a true spiritual successor to the original silver-dialed Zodiac Aerospace GMT from the seventies. Built as an exclusive for northern California-based Topper Jewelers, it seems like it won’t take long for this new reference to get the nickname “Crystal Pepsi” by anyone who tipped back one of the similarly colored blue and silver cans of the quirky soda spin-off from the early nineties. 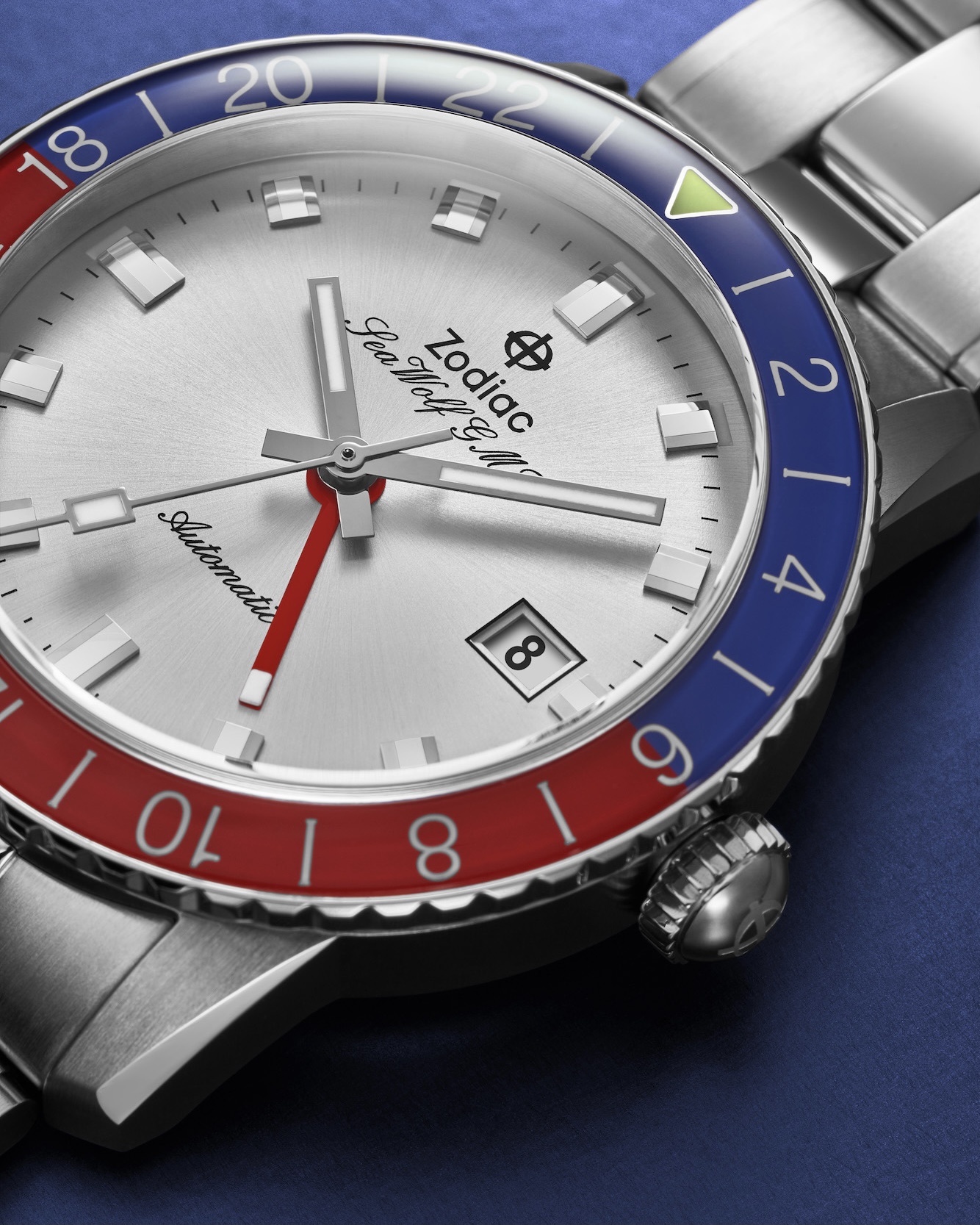 There’s a surprising dearth of super-wearable GMT watches, despite the seemingly overwhelming demand for references that might inspire travel (fingers crossed for a return to that later this year) and help keep many of us on time for calls and Zoom meetings with colleagues around the world. Zodiac was wise to preserve the svelte dimensions of the original Aerospace, rendering the modern version in a 40mm case that’s only 14mm-thick at the top of its domed sapphire crystal. Differing slightly from the original modern Aerospace GMT re-issue from three years ago, this Topper Edition (along with other recent Super Sea Wolf GMTs released by Zodiac) is powered by a Soprod C125 automatic movement, whose design and “desk GMT” functionality mirrors that of ETA’s long-running 2893-2 modular GMT caliber. Without an independently adjustable hour hand, this particular movement won’t ever create a perfect travel watch, but the quick-adjustment of the bi-directional rotating 24hr bezel makes time adjustments and readings in other zones a breeze. 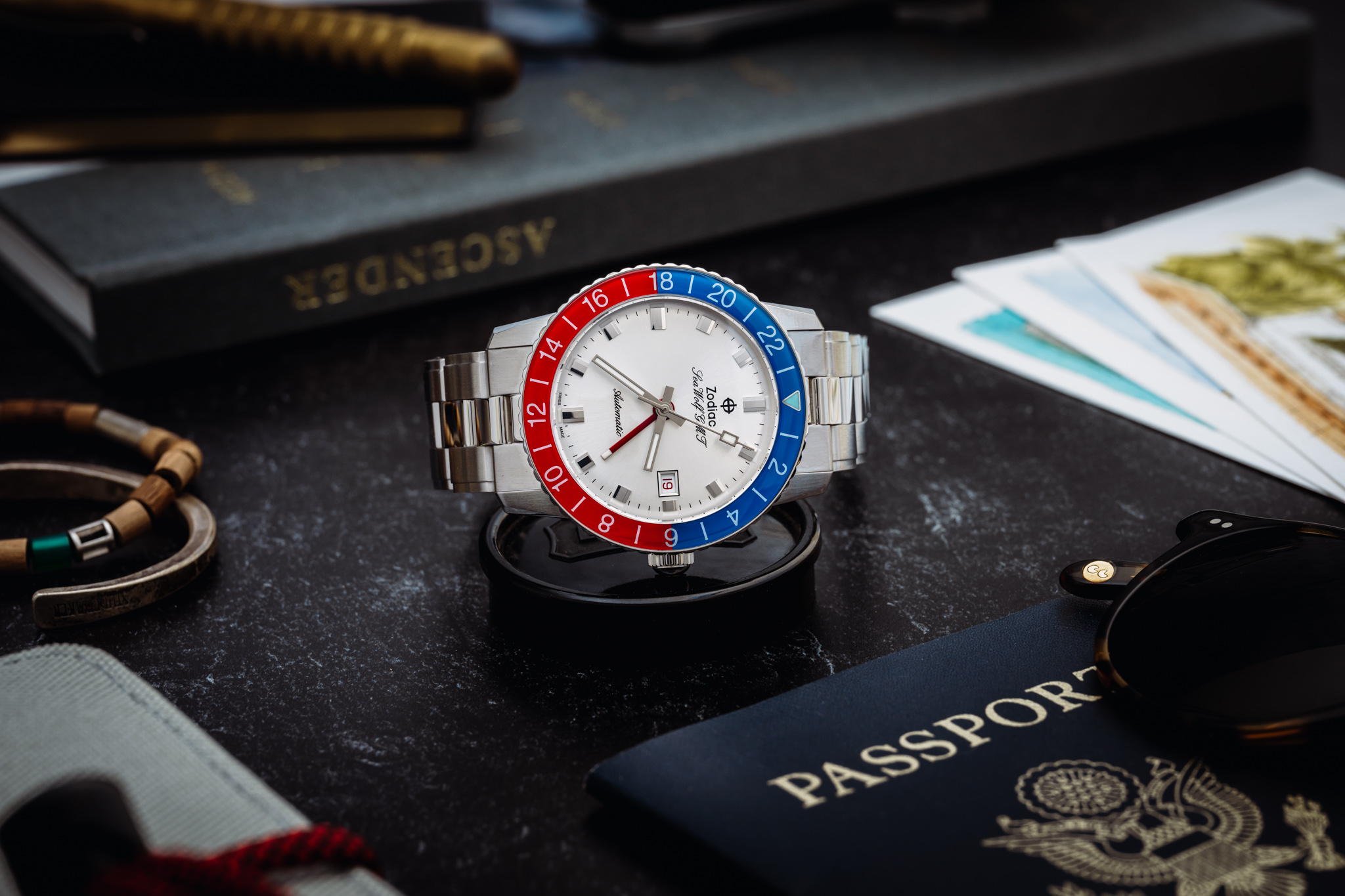 True to form for the “Topper Edition,” as the Burlingame retailer has been calling its exclusive collaborative releases, this new reference ZO9408 adds in a neat twist for Topper faithful: a bi-color red and blue “roulette” date wheel, which wasn’t a detail found on the original Zodiac Aerospace, but it was a feature expressed in many of the more colorful watches available from that same period. Topper’s been known for clever detailing in its collaborations, and this is one such thoughtful touch, though it was probably wise that neither party tweaked the formula too hard here, given the pent-up demand for this particular colorway. 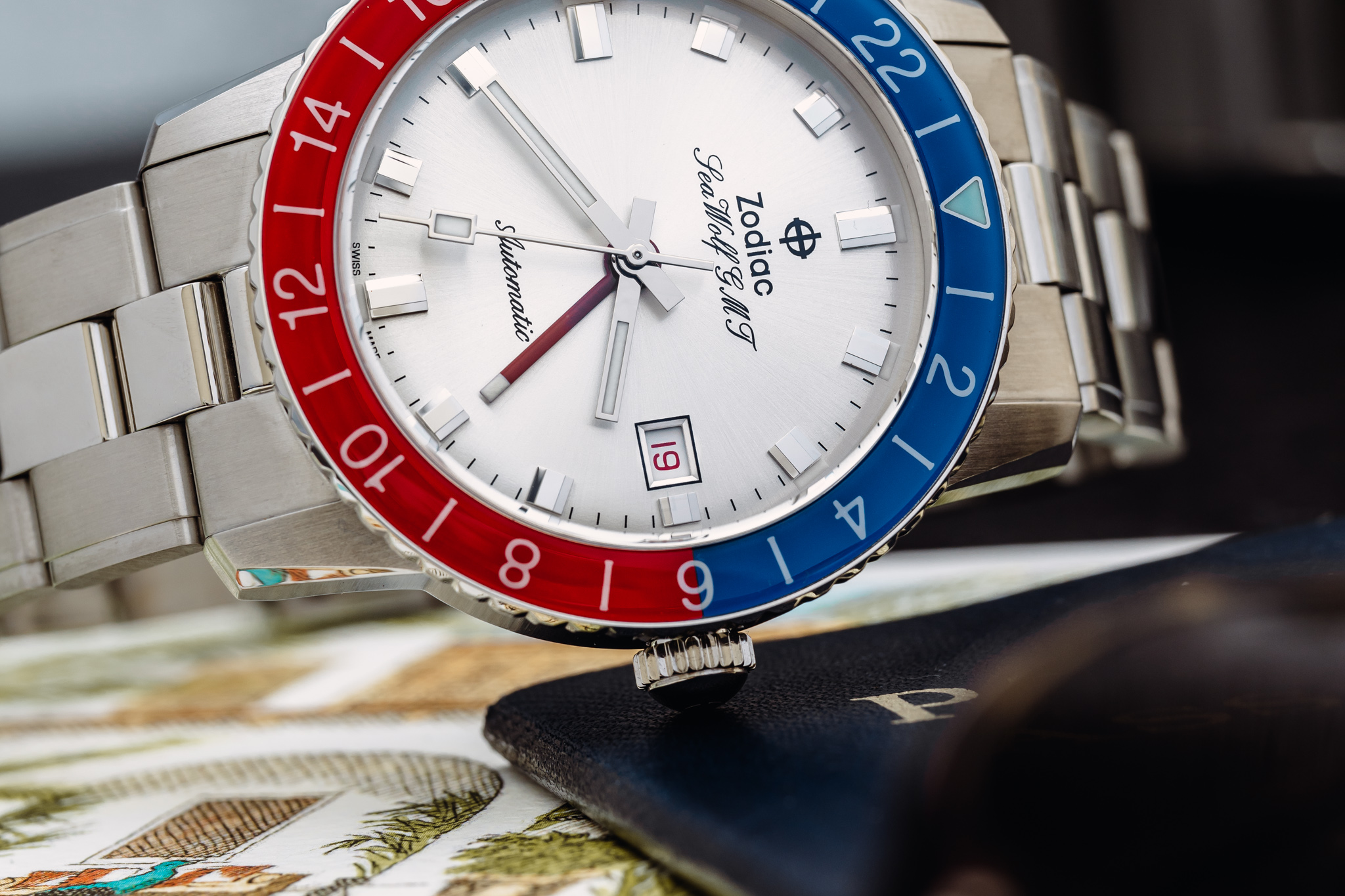 If you’ve been following the development arc of Zodiac’s GMT, you’ll know that when it was re-issued in 2019, it launched a new collection for the brand when it was called the Aerospace GMT – just like the original from the height of the jet age. But its name was quietly changed shortly after the launch (no doubt due to a copyright claim from Breitling), and all subsequently released watches were rolled into the “Super Sea Wolf” collection, with the “GMT” script added to the dial at 6 o’clock. One more detail that stands out in this Topper Edition is that the dial script reads “Sea Wolf GMT” at 12 o’clock, with just “Automatic” at 6 o’clock – another period-correct nod to the formal dial layout of the original.

The Zodiac Sea Wolf GMT “Crystal” Topper Edition is limited to 182 pieces and comes equipped on Zodiac’s three-link stainless steel bracelet with its flip-lock clasp. It has a price of $1,795 USD, and it can be purchased exclusively at topperjewelers.com.