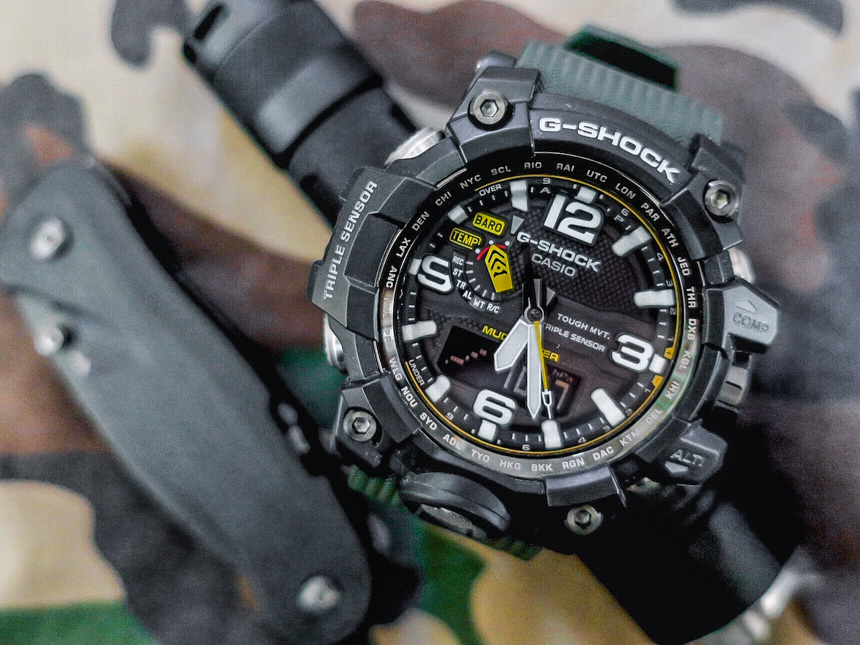 “Beauty belongs to the sphere of the simple, the ordinary, whilst ugliness is something extraordinary, and there is no question that every ardent imagination prefers in lubricity, the extraordinary to the commonplace.”

It’s been 250 years since French philosopher Marquis de Sade wrote those words, but things haven’t changed much since – especially when it comes to design. Beauty is still boring, ugly is still awesome. Ugly is also the calling card for the Casio G-Shock GWG 1000-1A3 Mudmaster – a prime contender for the world’s toughest, and most practical watch, but one that also looks like a cold war-era mission control computer bay was squeezed together with an industrial-grade trash compactor and then sliced vertically. It’s attractive in the same way that early Apollo space shuttles and Belaz dump trucks are attractive – each an achievement in design and capability, but never in danger of winning any beauty contests. But all that congeniality is an integral slice of the Casio G-Shock Mudmaster, whose exceptional build quality and wealth of genuinely useful features are a boon for anyone who insists on getting – and keeping – their hands dirty. To fully understand the Casio G-Shock Mudmaster’s wildly creative design and appreciate its feature set, it helps to understand where the “Master” delineation is juxtaposed in the G-Shock universe. This “ana-digi” series is the apex of the “Master of G” collection, which contains three elemental nodes: earth (Mudmaster), sky (Gravitymaster), and sea (Gulfmaster). There’s a stripped-down, companion model for each of these watches in the “Professional” range, which includes the likes of the Rangeman, Frogman, Gulfman and Mudman. It should come as little surprise that the purely digital Professional range is a little more widely known and distributed, due to their slimmed-down cases (by comparison), core feature sets, and no-nonsense execution – design language that’s certainly favored when discretion is paramount. This is a particularly important distinction when it comes to determining the audience for this watch, because subtle, the Casio G-Shock Mudmaster is not. Granted, it comes loaded with personality and busting at its resin seams with a slew of cool features, but the stuff that I genuinely appreciate — the crazy-accurate radio-controlled timekeeping, the ABC functions, and the slick world time jumping hour hand – all seem to run the risk of being entirely overshadowed by the watch’s wearability. Granted, it ain’t hard to overshadow much of anything with a watch of this size – the simple act of bringing it to bear runs the risk of causing a solar eclipse beneath my arm. Hell, even these wrist shots had to be taken from a camera positioned in a second-story window, but I digress. Kidding aside, if you break down the laundry list of primary functions built into the Casio G-Shock GWG 1000-1A3 Mudmaster, you might notice it bears a striking resemblance to another industry-leading ABC watch, the G-Shock Rangeman – a heavy favorite at the PX amongst actual servicemen. It almost begs the question: if Casio has the best environment-proof technology protecting its industry-leading solar-powered timekeeping modules, how come they can’t put their cases on a diet to build the ultimate military watch? The more discrete Rangeman comes close, as it’s fitted with the same third-generation “Triple Sensor,” but it lacks the ana-digi’s multi-tasking capabilities and the added environmental protection of the G-Shock Mudmaster. It’s not to say the Japanese brand isn’t capable – it’s just that doing so would undermine much of the appeal of a G-Shock itself, whose overt “G-Shock-ness” suggests that merely looking the part is half the battle when it comes to surviving the harshest environments on the planet. And here’s where the Mudmaster delivers in spades. Its chunky bezel and resin strap are affixed to the case with large hex screws, punctuated betwixt by a series of oversized buttons, which have a textured, hobnail surface that look as though they could pass for speakers on some kind of future steampunk radio device. In actuality, they’re satisfying, tactile targets for even the stubbiest of gloved fingers, making the operation of toggling functions, activating the dual-LED backlight at 6:00, starting or stopping the flyback chronograph, or flipping from a UTC timezone to home time a breeze. Even the rubberized screw-down crown can be manipulated with riding gloves on – a feat in and of itself. True to G-Shock form, the dial is about as busy as a New York City switchboard, but it’s also a textbook example of using various contrasts to manage a clear hierarchy of information. Fitted with a glare-proofed sapphire crystal to maximize sharpness, various textures, colors, and depths are all employed to display a wealth of information at just a glance – there when you need it, gone when you don’t. From the chunky L-shaped luminous hourly indices and ultra-crisp LCD display, down to the solar array on the surface of the dial itself, the complete package is a lot of fun to look at, and more fun to play with, as you flip between the watch’s eight primary features, indicated by the skeletonized yellow indicator at 10:00. I shouldn’t even pretend to think that a G-Shock with all the trimmings would ever be small, as the brand hangs its hat on eschewing discretion and overbuilding its cases with legendary aplomb. A good portion of that size can be attributed to two of the protective measures that lend the watch its namesake: firstly, the burly, oversized crown and its heavy-duty gaskets that seal out the ingress of dirt or water – up to 200 meters of the latter. And secondly, there’s Casio’s “Alpha Gel,” a soft, silicone-based dampening compound which is packed around the movement module to protect it from damage due to powerful shocks or prolonged vibrations. Another special countermeasure on the Casio G-Shock Mudmaster includes the “Tough Movement” designation, which means that the analog hands on the watch can automatically re-align themselves in the event of a shock powerful enough to de-couple them. This protection, combined with the watch’s solar-powered battery and “Waveceptor” technology which automatically synchs to time-broadcasting radio signals from one of six atomic clocks worldwide, means it literally never needs adjusting or a battery change. If there ever were a true contender for an end-of-the-world watch, the Mudmaster might be as close as it gets.