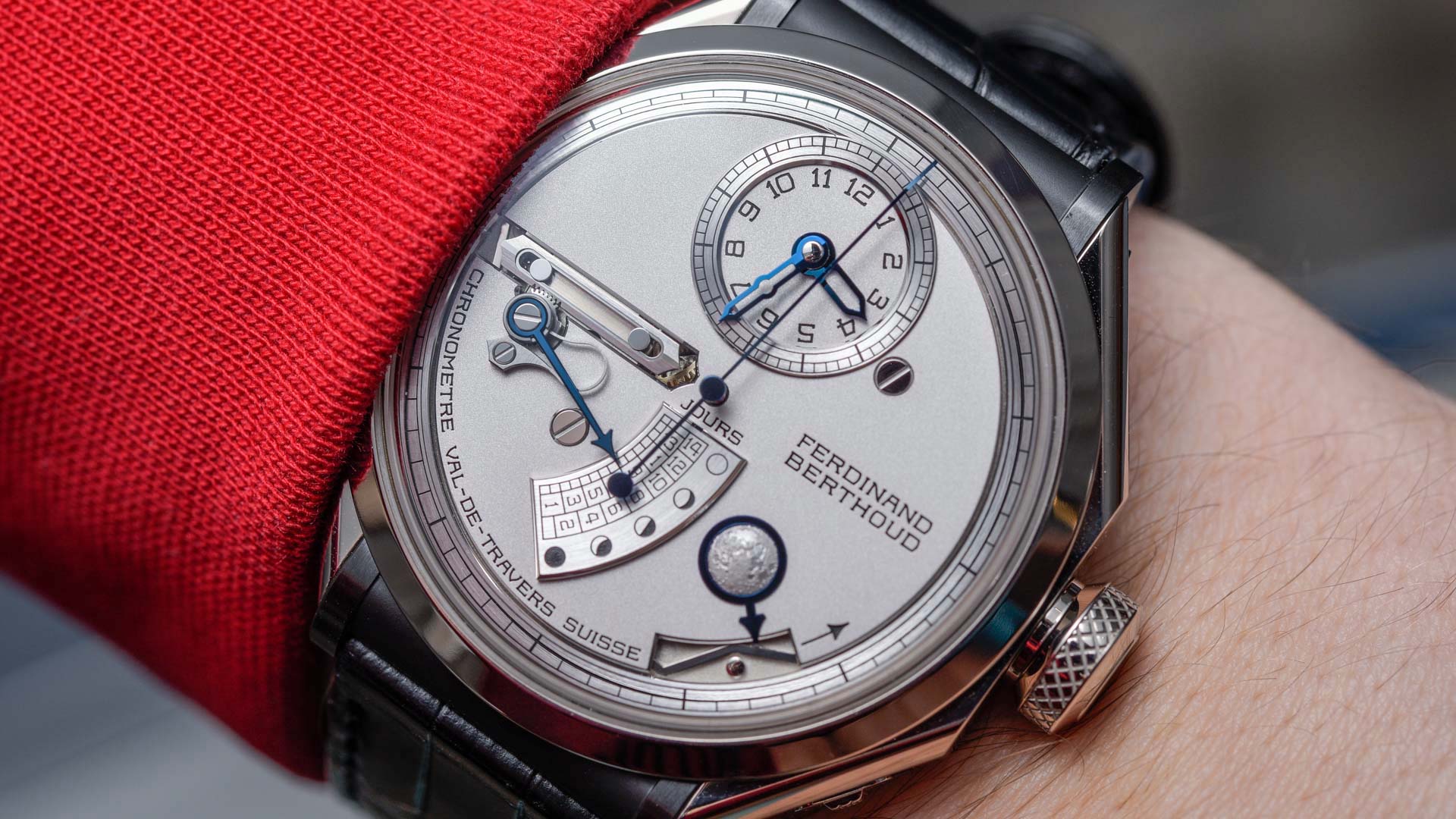 The FB 1L is the latest invention from Ferdinand Berthoud, the Fleurier-based brand with a uniquely modern approach to vintage-inspired watchmaking. Karl-Friedrich Scheufele, co-president of Chopard,  acquired the rights to the name Ferdinand Berthoud in 2006 and relaunched it in 2015. His philosophy from the beginning was to take inspiration from the works of the founder rather than to design commemorative watches that would simply be nostalgic remakes of early models. The goal is to create modern complications that are worthy of Ferdinand Berthoud’s genius and which he might have created were he still alive. The FB 1L is a nod to the marine chronometers that were Berthoud’s specialty two centuries ago. Specifically, it is inspired by a chronometer with an equation-of-time function, but instead of simply reproducing an updated version of that complication, Scheufele’s team created a new complication — an age and phase-of-moon display that visually and technically resembles Berthoud’s original equation-of-time display. Not only is it a departure from the conventional disc-style moon-phase display, but it is also accurate to within a day for 577 years, as opposed to the conventional 122 years. Berthoud, a French watchmaker born near what is today Neuchâtel, Switzerland, worked mostly in Paris, devoting his career to the work of marine chronometers. He was, for a time, the official watchmaker of the King of France, which essentially meant that his research into marine chronometers was financed by the King. Berthoud was active from the mid-to-late 1700s, during which time he published 11 watchmaking treatises in 30 years that were regarded as authoritative for decades. After the French Revolution, he continued to work for the state. His master written work was “Histoire de la Mesure du Temps,” published in 1802, shortly after which Napoleon appointed him a Knight of the Legion of Honour. The FB 1L Chronometer is a tribute to this heritage, and to the quest for ultimate precision in marine chronometers, which were crucial for navigation in Berthoud’s time. By night, ship captains navigated using the position of the moon, and that is part of the inspiration behind the FB 1L’s new lunar complications. The two functions are charted simultaneously on an index in the lower left quadrant of the dial, using a display similar to one used by Ferdinand Berthoud to indicate the equation of time more than 200 years ago. Phases of the moon are illustrated on the outer arc of the index, including the new moon, first quarter, full moon and last quarter. The two rows of numbers on the inside arc represent the number of days since the last new moon, indicated by an arrow-tipped hand. You can see the feeler-spindle with a steel spring at 9 o’clock that drives the moon indications. Another indicator, a jumping retrograde index at 4 o’clock, tells you whether the arrow on the moon age index is moving up or down, to indicate whether the moon is waxing or waning. (It also looks like the Mars symbol for man, but I don’t think that is intentional). The new complication is incorporated into Ferdinand Berthoud’s existing FB-T.FC caliber, with a suspended fusee and chain that delivers a constant force to the escapement throughout the 53-hour power cycle. It also includes a tourbillon with direct-drive seconds and power-reserve indicator (both visible on the back, where the complexity of the watch can really be appreciated). The movement was modified by about 30% to include the new-moon phase and age functions. Patents are pending on the movement’s differential winding system, the Maltese cross stop work system, the tourbillon with a direct-drive seconds hand, and the cam and feeler-spindle serving to display the age of the moon by means of a hand. For the FB 1L collection, the case includes a selector switch between 4 and 5 o’clock that allows the wearer to choose between two positions, L and H, to set the age of the moon or the time (lunar/heure). There will be 10 pieces each of two versions of the FB 1L Chronometer: one representing the near side of the moon, with a silver dial, blue hands and 18-karat white gold case; and the other representing the dark side of the moon, with a dark dial and white hands and a case in anthracite ceramicized titanium and 18-karat sandblasted white gold. The octogonal shape of the 44mm case was typical of 18th-century marine chronometers, which were mounted on gimbals. The “Val-de-Travers” on the dial is a reference to the watchmaking region near Neuchâtel, where Berthoud was born and where the village of Fleurier is located. The strap is hand-stitched rolled-edge alligator with an 18-karat gold pin buckle. It is priced at $262,500 for the dark side of the moon version and $278,500 for the near side of the moon. You can learn more at ferdinandberthoud.ch.