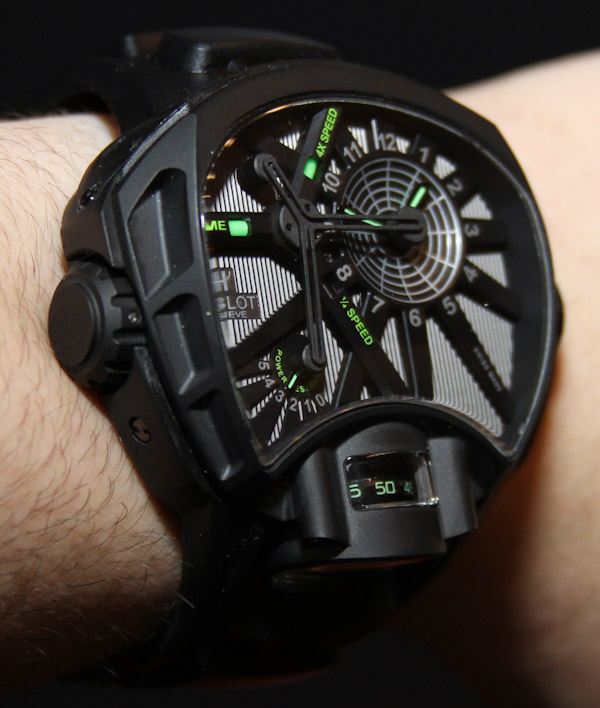 Does the key of time hold the key to time? Depends on how you look at it. A few years ago Mathias Buttet created a weird watch movement capable of speeding up and slowing down time, and then automatically return the dial to the normal time. Poetically the movement had a lot of value, though practically it had next to none. What it did however do was offer a unique design opportunity to see how one might create a timepiece around this concept. This is the third try.

The first watch to use this complex vertical tourbillon based movement was a company called Horus that made a boat style watch out of it called the Ultramarinum. I believe Horus is now defunct. Then Mathias decided to use the movement in one of his own watches for the BNB Confrerie Horlogerie in a watch called the La Clef (with an “f”) du Temps. I actually got to play with this incredible odd watch hands-on for myself. Mathias explained to me that it was designed using the look of the movie character Predator’s head. Fair enough. BNB is not defunct. Mr. Buttet with his risk taking and creativity is now at Hublot running the movement making and designing arm. With Mr. Biver’s guidance and the Hublot DNA, I think that Mathias finally found his groove. Early this year I wrote about this watch that now has the name of the Hublot Confrerie La Cle du Temps – and now I offer you a hands-on experience of an almost ready for production model of the watch. Priced at over $300,000 this isn’t a watch that is made to make money. It is make as a concept, a passion play of design and movement making designed to stimulate the imagination and offer Hublot a creative outlet. With pieces such as this coming from Hublot on a regular basis, they are more or less the premiere brand right now that is releasing experimental futuristic designs and movements. Chalk up to a Biver + Buttet power relationship. On the wrist the watch actually looks a bit smaller than its massive visual stature might suggest. A lot of it is in black rubber and black metal to emphasis the luminous green elements on the dial. If I didn’t know better I would say this that watch looked like one of the coolest movie props around. It just has a distinct Hollywood vibe to it. This is also the watch Mathias himself has been wearing on his own wrist the last few times I have seen him. The dial has been meticulously designed by Mr. Buttet to be more legible than before, but also much more futuristic. Facing toward you on your wrist is a massive gaping maw of what is a vertical tourbillon staring at you. To operate the watch you have just two large crowns – one on each side of the case. It doesn’t even need to the tell the time to look cool.

Buttet seemed to realize that the function to speed up and slow down time was more or less a gimmick. The watch doesn’t focus too much on this element. In fact, that function might not be there and you probably wouldn’t notice. I see it as more of a “my watch should entertain me when I am bored feature.” The information you see more is the time and power reserve for the five days of energy the Hublot La Cle Du Temps movement stores. Everything about the watch is about experimental design. I did mention that it was comfortable to wear – which is true. I would love to walk around a watch-hungry city in Asia and see what people think. Most of the time I would endeavor to discuss the little details in a watch such as the materials it was made out of and its dimensions. In this instance I am not even going to bother. Why? It is totally immaterial to one’s decision to buy it. “Shame it is 50mm wide versus 48mm wide, that really would have pushed my decision to purchase over the ledge.” Really not what is at issue here. The sad thing is that this watch isn’t likely to get you laid as much as it should. You are more likely to get a Star Trek convention fan aroused with this on your wrist than you are that hottie in a one-piece mini dress at the club who can only see a few pieces of the watch glow in the dark in front of her. Ten minutes into your conversation on what this watch does, she has slipped into a thought trance on what all future conversations with you are going to be like.

At least you’ll know that it is cool. Isn’t that enough for you? Hublot will make just 50 pieces of the Hublot La Cle Du Temps for the world to digest. If I don’t see Mathias wearing one of these on a regular basis I will be just a bit disappointed. His next invention should be a watch that works on speeding up and slowing down the tempo in people talking to you. Wouldn’t you like conversations with your parents to happens four times faster?