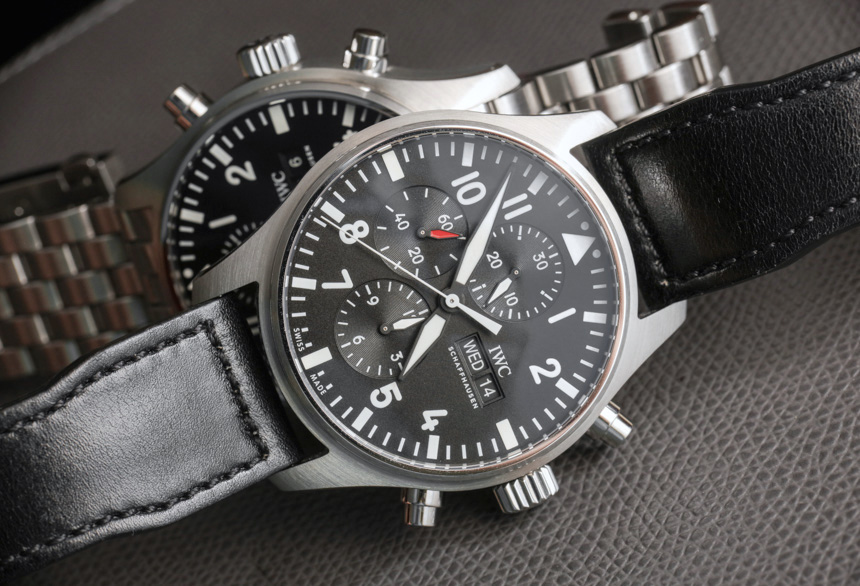 Like many luxury watchmakers these days, the goal of IWC isn’t so much about novelty as it is about refinement. Many of the classic watch models and themes we like are evolving slowly in the “Rolex Way,” meaning slight improvements over time as opposed to major shifts and spurts of design creativity. This is a good framework for understanding the current generation IWC Pilot’s Watch Chronograph reference 3777 family of watches refreshed back in 2016. At SIHH 2016 IWC offered some light but highly appreciated revisions for the Pilot’s Watch Chronograph collection here. If you are interested in this watch and the various versions available, I recommend you check out that link. For now, I’ll proceed to review a timepiece that I think should have a place in a lot of people’s collections as a regular wear option.

Sports watches are typically segmented into a few major categories based on the overall theme they are based on. While blending occurs often enough, purists tend to appreciate watches designed for rather specific purposes. To that end, we have the dive watch, the driving watch, and of course the pilot watch. Each of these core types of “activity timepieces” has an incredible variety, but tend to share more things in common with each other than differences. By this, I mean that if you put a lot of pilot watches together on a table, you’ll probably see a lot of things in common. In some ways, the IWC Pilot’s Watch Chronograph attempts to be an “elegant average” of what the brand feels you might expect to see in a pilot watch with a chronograph. It’s a blend of design themes and styles done together in a way that is balanced, logical, and steeped in actual history. In other words, it is what some people consider to be the formula for a perfect Swiss timepiece. IWC based out of Schaffhausen, Switzerland near the German border is no stranger to pilot watches. I believe that the brand produced them during both world wars, and moved from being a maker of good watches to luxury watches when the industry underwent major change mostly in the 1980s. Today IWC likes to play off of its history as much as it can, and compared to all of the sports watches it makes today (Aquatimer, Ingenieur, etc.) its pilot watches have the most “historic legitimacy.” That doesn’t tend to matter to me as I am a fan of anyone who makes quality products regardless of their history, but it has benefited IWC in a major way because when compared to their other watches, they seem to be the most comfortable when making pilot watches. It is as though the brand seems to really possess a strong grasp of what goes into a decent pilot watch, which makes their timepieces feel authentic from a design perspective, and comfortable when on the wrist. In other words, out of the many brands that make aviator watches, IWC aviator watches are among the few that really seem to feel comfortable in their own skin. You can spend a lot of money on an IWC pilot watch as well. Opt for fancy in-house movements and precious case materials and you’ll be spending very big bucks quickly. With that said, my own personal appreciation of their pilot watches is actually a lot more on the entry-level side where I think you get a good deal along with a good design. The most entry-level of IWC’s pilot watches (for men) is actually just called the Pilot’s Watch, and in its current Pilot’s Watch Mark XVIII form (hands-on here) you get a very sensible 40mm wide watch that will serve you well for a long time. Its a great watch, but its just a bit too small and simple to pull at many Western men’s heartstrings when it comes to being a “man’s sports watch.” For $1,000 more you get into Pilot’s Watch Chronograph territory that maintains a simple and functional demeanor, but in a slightly larger case with a more intricate dial that “tool watch guys” have voted with their wallets to love time and time again. At 43mm wide and 15mm thick in steel, the IWC Pilot’s Watch Chronograph wears large, but very comfortably. It is no doubt masculine in proportions, but fails to look overly-sized, which is a good thing. IWC did a good job to emphasize the size of the dial by keeping the bezel thin, and making sure that the primary function of the device (to tell the time) is effortless thanks to the correct choice of textures on the dial and the high contrast between the face and the markers/hands. In a way I could probably recommend the dial of the IWC Pilot’s Watch Chronograph to students wanting to understand effective watch dial design because there is so much being done properly here. IWC pulls from decades of history and design culture just among pilot watches to come up with something classic (even if it looks a bit generic at times). Whatever IWC lacks in pure brand DNA character in a watch like this, they make up for in emulating a desirable look in a way that, in most instances, bests the competition. I say this with love, but right now IWC makes one of the best generic pilot watch dials around – and that is saying a lot because so many are seemingly trying.