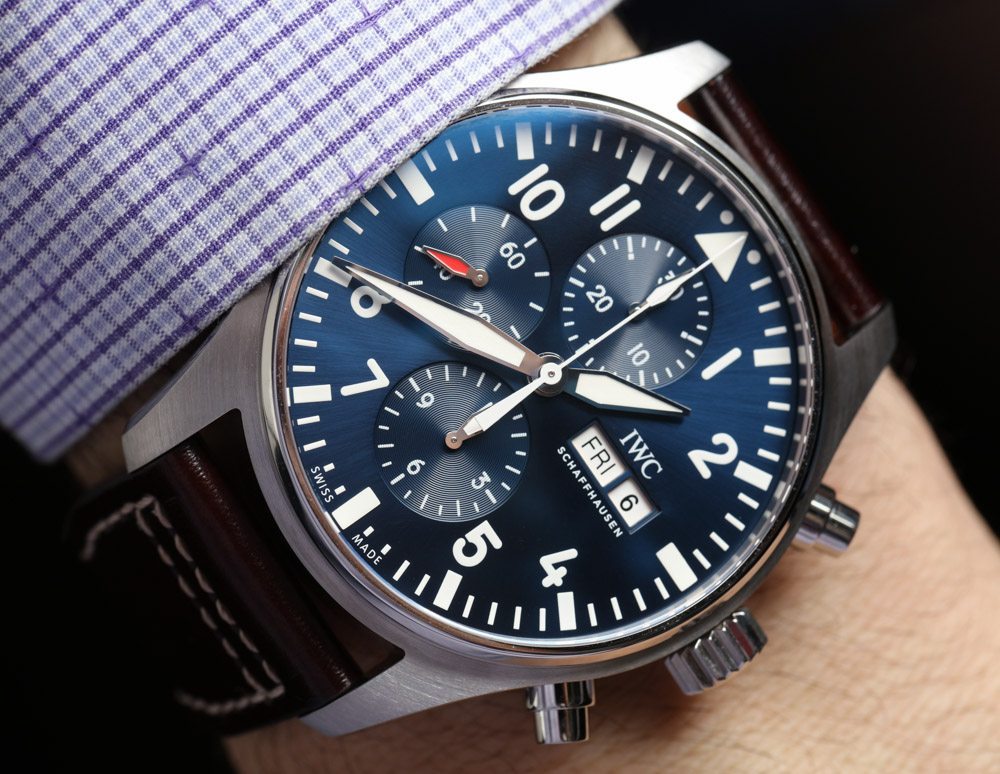 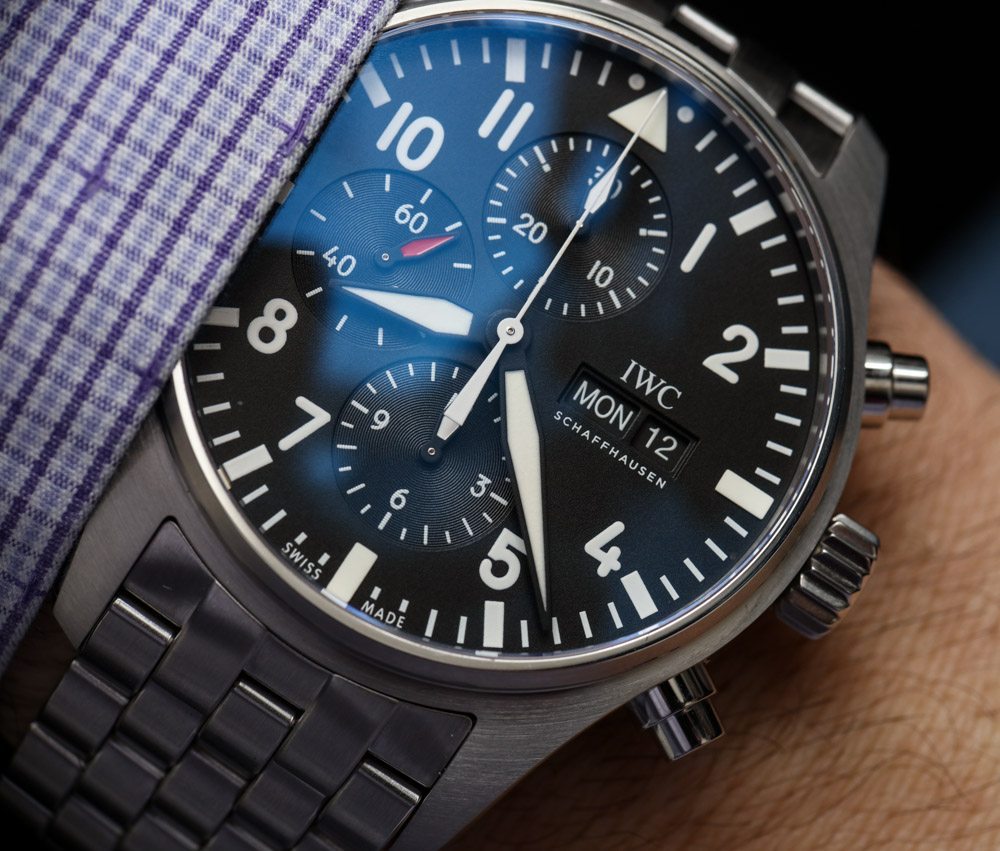 At SIHH 2016, the theme for Schaffhausen-based IWC was once again pilot watches. As part of this year’s new models, IWC introduced a new reference 3777 Pilot’s Watch Chronograph range that builds upon the popular collection with new refinements and appeal. In this article, I will be discussing two models – first is the standard reference IW377709 (on strap) and IW377710 (on bracelet) which has an iconic black dial. We also have the metallic-blue-dialed variant which is known as the reference IW377714 IWC Pilot’s Watch Chronograph Edition “Le Petit Prince.” 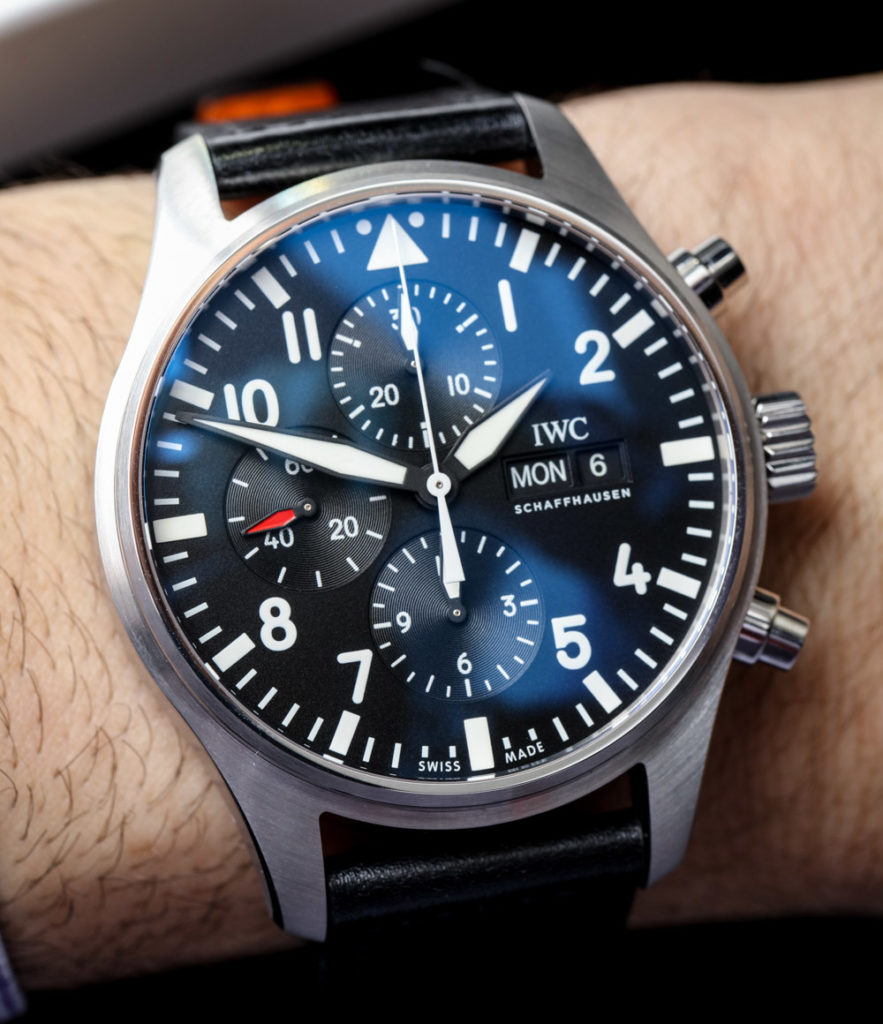 IWC’s Pilot’s Watch Chronograph 3777 has always been a more entry-level offering from the brand, but nevertheless one of my favorite IWC watches. For me, this is one of the best-rendered aviator chronograph watches on the market, and IWC has both the style and quality nailed. The 2016 IWC Pilot’s Watch Chronograph models aren’t dramatically different from outgoing models, but rather given small updates and new reasons for people who don’t have one of these models to take a close look at them. Back in January, aBlogtoWatch mentioned this and other new IWC Pilot’s Watch releases for the year. 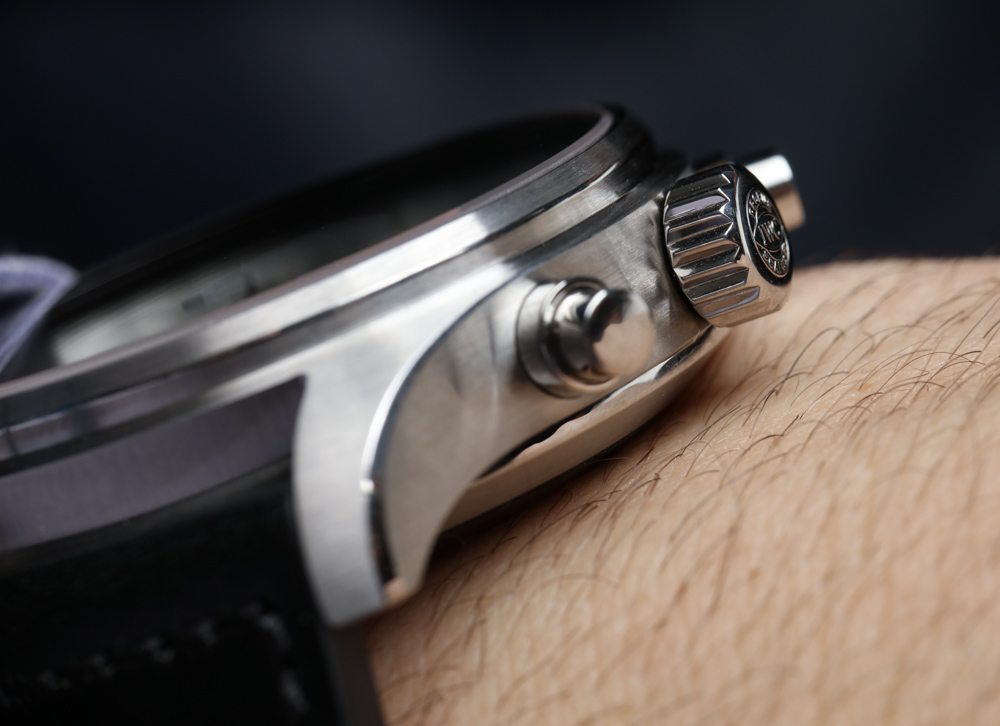 In fact, I will more or less explain what is “new” in the 2016 IWC Pilot’s Watch Chronograph 3777 models, and that is a redesign of the minute markers and periphery of the dial (removal of the Arabic numerals), as well as simplification of the calendar windows. Gone is the controversial “triple-date” “T window” that opened up the date window to show more numerals. IWC has finally removed this design element and created a more clean display for the day of the week and date windows. Otherwise, the 2016 IWC 3777 watches are more or less the same as the outgoing IWC Pilot’s Watch Chronograph 3777 collection (that isn’t a bad thing). 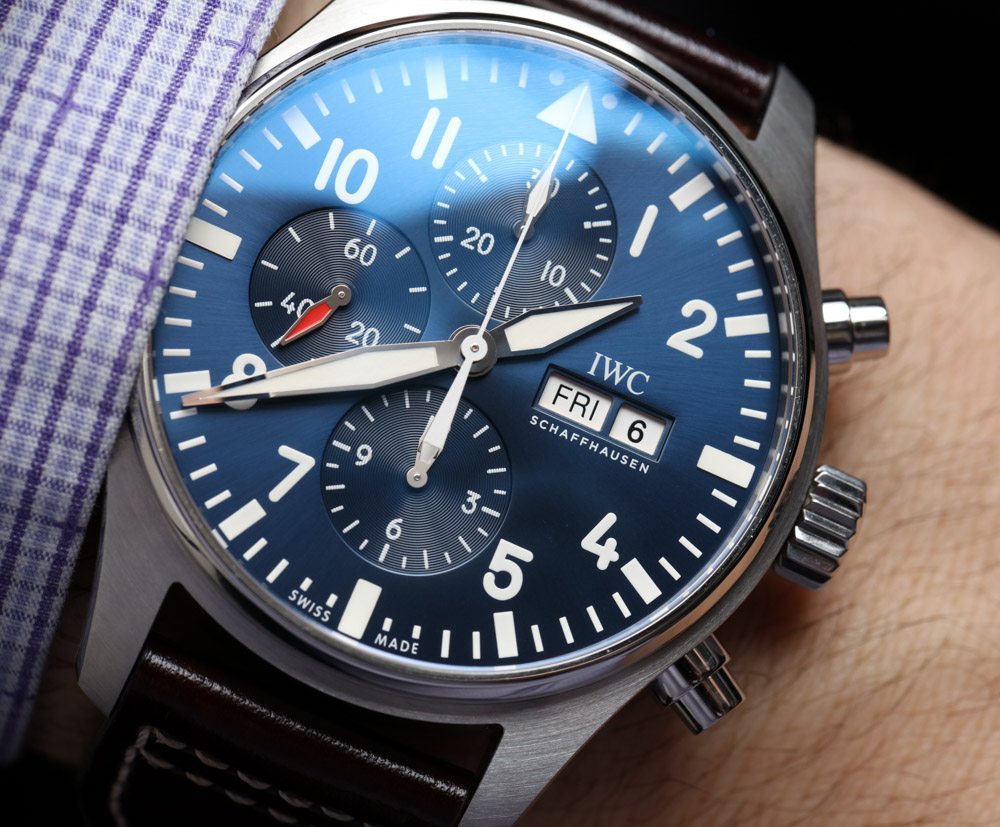 Of course, the lovely metallic-blue-dialed Le Petit Prince model (not a limited edition) is a new offering. For sometime, IWC has been producing Le Petit Prince edition watches of various models they make – many of them being limited editions or more high-end. With the reference IW377714, we finally get a blue-dialed variant of the IWC Pilot’s Watch Chronograph 3777 without any price premium. You’ll notice that the IWC Pilot’s Watch Chronograph 3777 also features different hands (polished outsides versus black) which match the metallic blue dial. It’s a handsome alternative to the stock matte black dial for those who perhaps already have an older 3777 that doesn’t per se need to be replaced. 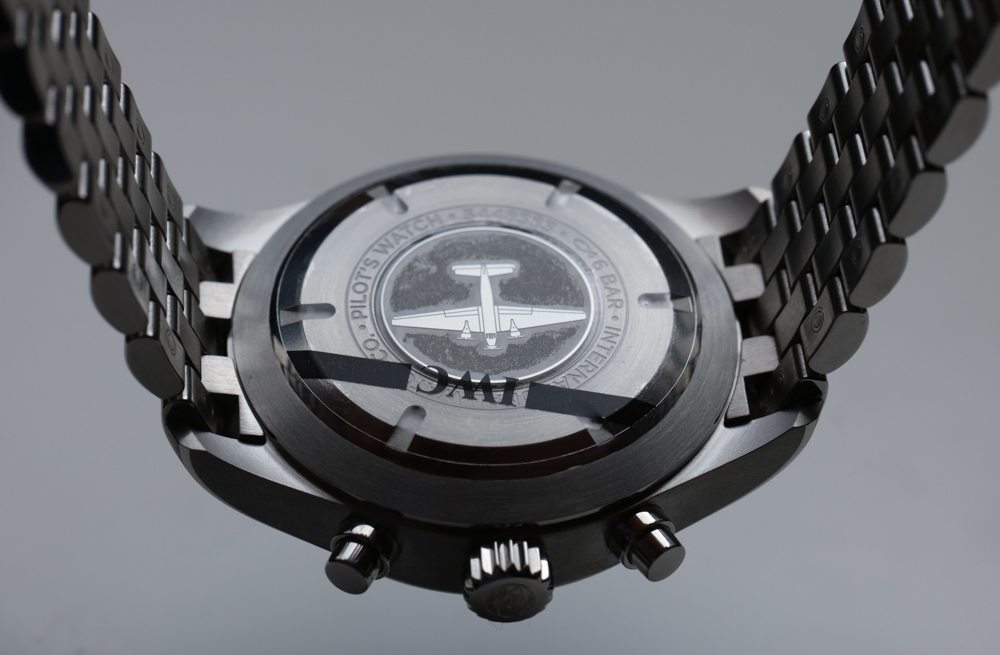 IWC produces the Pilot’s Watch Chronograph in a 43mm-wide steel case that is given an excellent finishing that blends sportiness with just a hint of high-society luster thanks to some nice angled beveling. The case is also 15mm thick and water resistant to 60 meters (100 meters would have been preferred, of course). No exhibition caseback window, but IWC does use a soft iron core around the movement which adds a nice level of anti-magnetic resistance to the Pilot’s Watch Chronograph 3777. 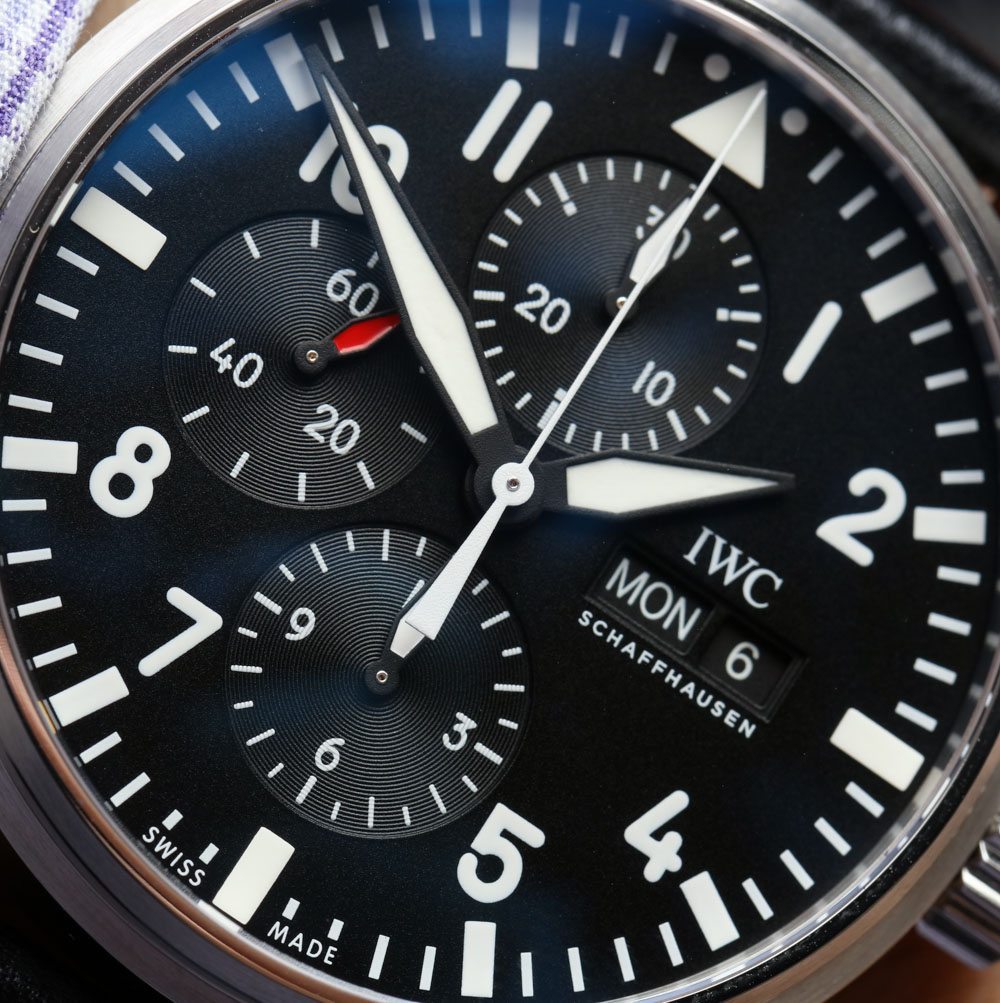 One of the reasons that the 3777 Pilot’s Watch Chronograph models work so well is the great mixture of case size, style, and wonderful execution of this style of pilot watch dial. IWC arguably offers a best-of-breed set of dial materials and textures resulting in one of the best-looking faces around if you are seeking this style of watch. Go ahead and compare it with the competition, as, in my opinion, IWC really does “own” this niche of pilot watch styles. A big part of that is how well they do the hands. 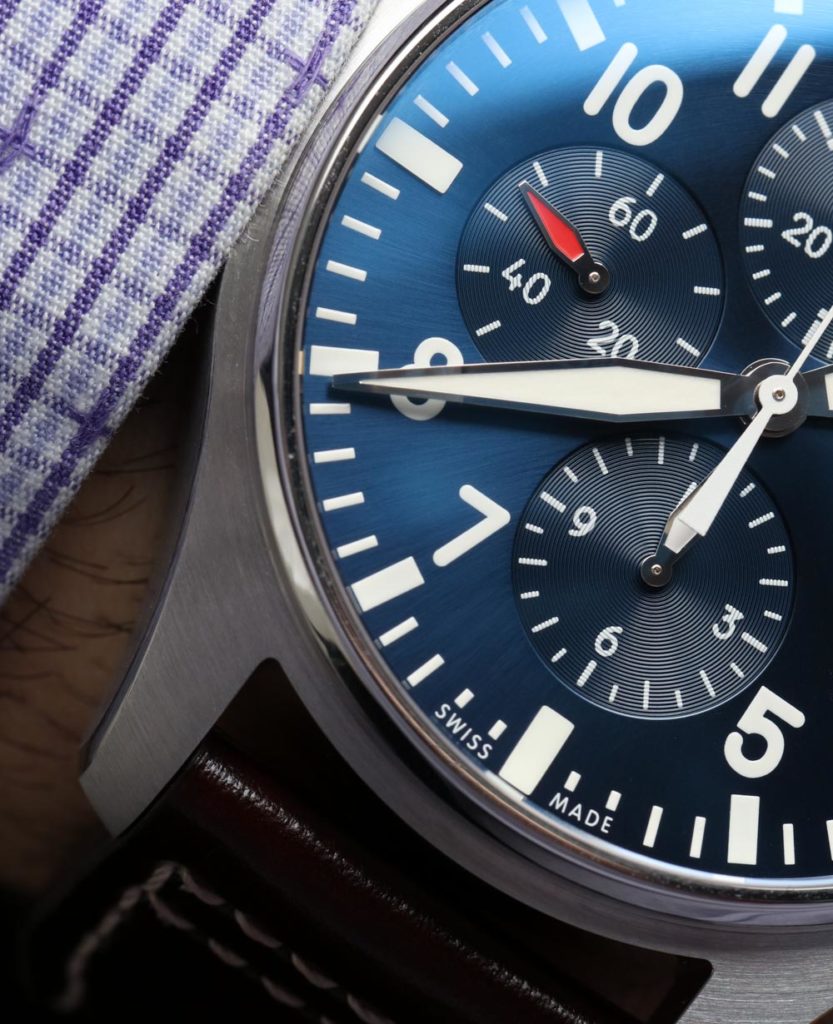 Inside the IWC Pilot’s Watch Chronograph 3777 models are IWC caliber 79320 automatic chronograph movements which are base Swiss ETA Valjoux 7750 calibers (or equivalent). Snobs might scoff that it is better to simple pay more for a different model with an in-house made IWC movement, but I think many will agree that unless you are looking for specific functionality a 7750 movement doesn’t offer, a work-horse tool watch like this is the most appropriate when married to a work-horse reliable movement like the 7750 automatic chronograph. It operates at 4Hz (28,800bph) with about 2 days of power reserve – and IWC includes its full features with time, 12-hour chronograph, and day/date display on the dial of the 3777 watch models. 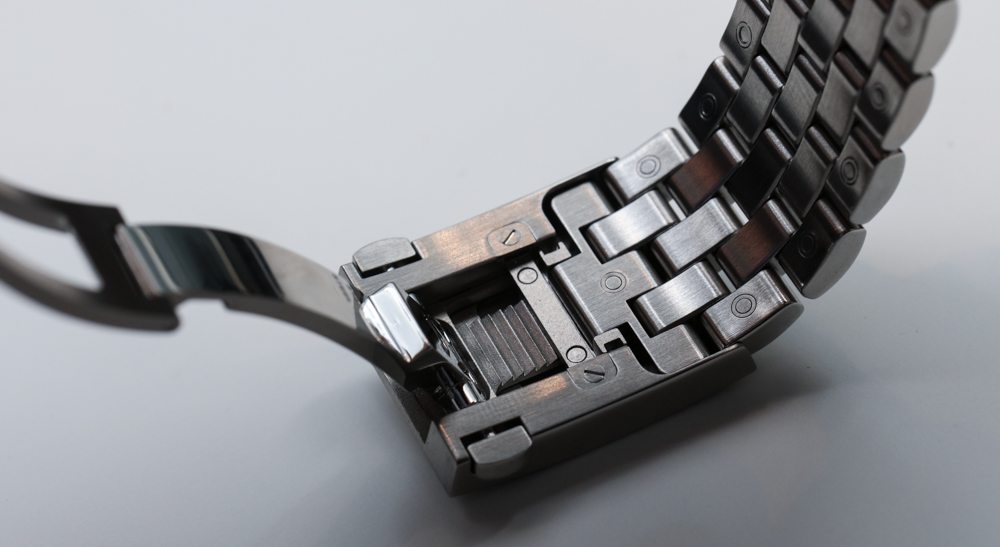 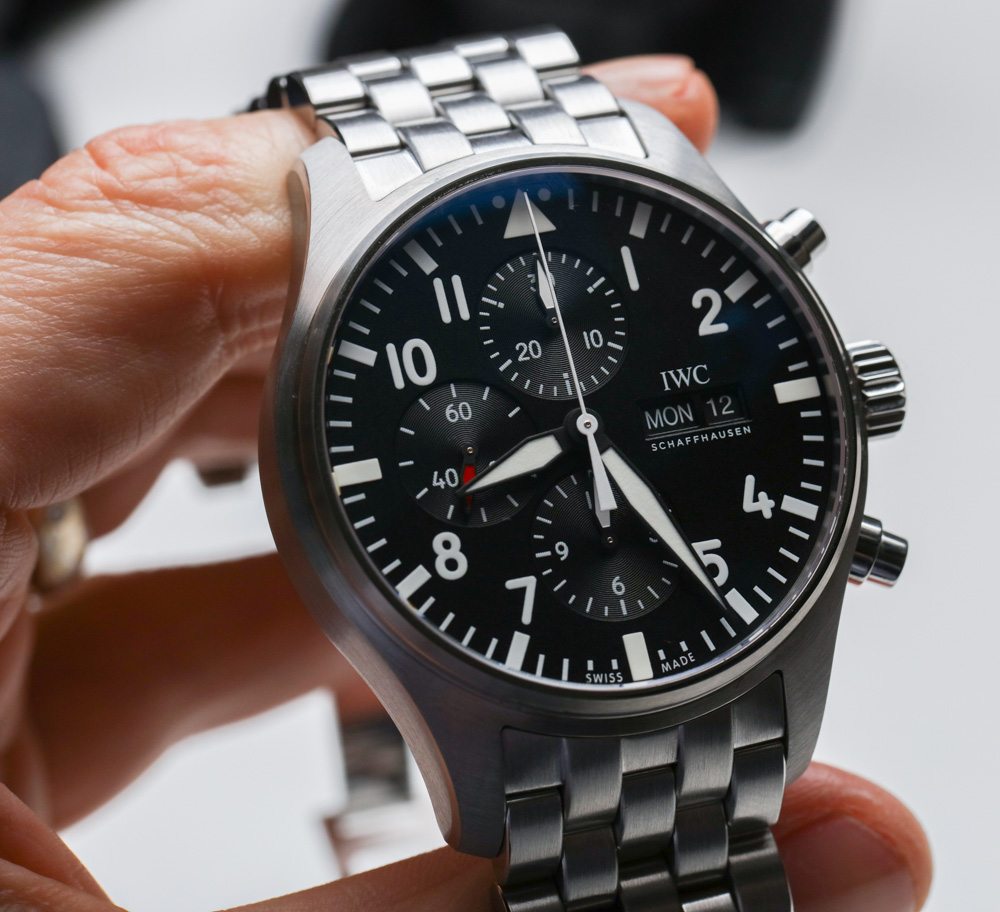 IWC includes an admittedly nice black or brown calfskin Santoni strap with the IW377709 or IW377714 (Le Petit Prince version) watch, respectively, that comes on a simple buckle (sadly, no deployant clasps on the Santoni straps, as far as we saw). While the IWC Pilot’s Watch Chronograph 3777 always looks good on these straps, I would urge people interested in the black-dialed IW377710 to consider the available five-link steel metal bracelet. Not only do I happen to be a major fan of when watches come with bracelets specifically designed for them, but the bracelet here has a micro-adjust feature in the clasp which allows for a precise comfort fit that you can open and loosen a bit on the fly. Micro-adjusts on bracelets are quickly becoming an important feature to look for, and it was a welcome and unexpected treat to see one here in IWC’s close-to-entry-level 3777 model family.

Comparatively speaking, the IWC Pilot’s Watch Chronograph 3777 models are affordable in terms of the larger IWC timepiece line-up, but they are still at the limits what you should be asked to pay for a timepiece with these specs. With that said, a lot of people have a very high level of wearing enjoyment with these timepieces, and even with just minor updates, the IWC Pilot’s Watch Chronograph collection has never been a stronger choice. Prices for the IW377709 and IW377714 on the strap are both $4,950 and the IW377710 on the steel bracelet is $5,950. iwc.com