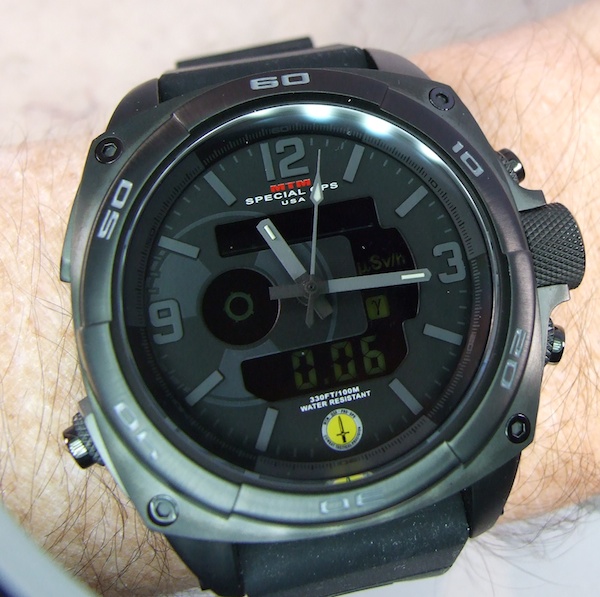 The MTM Rad radiation detection watch is, with no exaggeration, a unique watch. Very few people will ever need one and those that do will be delighted to find it.

You see, this watch has a Geiger counter in it. $1,500 gets you a very unobtrusive radiation detector you can wear on your wrist. That, as I will explain, is amazing.

A bit of backstory seems helpful here. I was at Sandia National Labs for about five years while at university, and ours was a high-radiation laboratory. (Small-angle x-ray scattering, details published here.) I worked in a radiation area, and also had the rare opportunity to do experiments on the Sandia 2MW reactor as well as neutrons at Los Alamos. I’ve had lots of time using radiation detectors of all kinds.

My credentials established, let’s dive in.

The watch portion of this MTM is a conventional 3-hand analog quartz movement, which runs un-synchronized to the digital portion. The hour and minute hand have small tritium vials on them for illumination, and despite being grey against a black dial, legibility is actually quite good. The RAD is a big watch, due to the inclusion of the Geiger-Muller tube needed to detect gamma and x-rays. A full 20mm thick, 47mm wide and 56.4 lug to lug. With the rubber strap, it weighs 154g; it’s a very good thing that MTM made the case out of DLC-plated titanium, in steel this would be a brick. Sapphire crystal, too; good materials here. The watch is water resistant to 100m, and the battery should last two to three years.

Out of curiosity, I ran a 5K with it, and even while running it’s readable. The weight is OK due to the width, tightened down I didn’t notice it while running. No, it will not fit under the sleeve of a dress shirt unless you move the cuff button. The rubber strap is sized well for the watch at 24mm wide, tapering from 7mm thick down to 3.6 at the ends. There’s also a DLC bracelet available, as well as a version in grey. Massive 10mm crown, knurled and screw-down with MTM’s signature hex-key motif. Note that the crown tubes are also hex-keyed and threaded, this will emphatically not lose a spring bar. That’s what it looks like. Since most Geiger counters are the size of two stacked bricks with a spatula-sized detector, this sucker is a big step forward in miniaturization. (If you’re curious to see what it takes to make a Geiger counter, start here.) The MTM can measure both rate as well as dose, with alarms for both as well as sensor calibration. Units are the SI-compliant grays and sieverts. It’s utterly cool to leave it measuring dose rate; you can glance down and see that I’m getting 0.07 micro sieverts per hour. That’s background level at my house.

I don’t have isotopes or access to sources any more, so I took the Rad along on a flight from San Diego to San Jose. At high altitudes, you get a bit more radiation due to the reduction in shielding atmosphere. On my flight, I saw readings around 3.7 micro sieverts/hour at cruising altitude. Not a lot, but a good demo of the counter.

In case you weren’t impressed yet, there’s more. The watch can save readings at a button press, and the dial has an infrared LED hidden on it, for transmitting the data to your computer via the included IrDA USB dongle. Very cool.

Let’s cut to the chase. If you work in a radiation area, buy this watch. If you’re wondering about dosages where you live, buy this watch. While bulky, it effectively doubles as safety equipment and there’s no external clues to observers of what it does. I was wondering what the TSA would think of passengers wearing Geiger counters, but the only clue is a recessed grey trefoil on the dial, and no one yet has sussed it out. The first picture shows the EL backlight on the LCD. Nice low-key readability at night. Build quality is excellent, very solid and well made. This should last a while.

It’s big enough to be problematic for daily wear [ED. Note: Paul tends to favor smaller timepieces, so many likely won’t have an issue with the size], and you’d be hard pressed to wear it with nice clothes. Might be passable on the bracelet, but size up your cuffs before you try. Expensive. Unless you’re in a limited number of professions, you’ll hopefully never need a Geiger counter anyway. The bezel is darn near useless, as it lacks a marker triangle or illumination and is thus only readable in good lighting.

I suspect that a portion of the wearers of this watch would have some amazing stories to tell. The MTM Rad Black is priced at $1,500. specialopswatch.com

Necessary Data
>Brand: MTM
>Model: RAD Black
>Price: $1,500
>Would reviewer personally wear it: If I went back into radiation work, I’d buy one before I started the first day.
>Friend we’d recommend it to first: A radiation worker, or anyone obsessed with their immediate environmental conditions.
>Worst characteristic of watch: Size.
>Best characteristic of watch: Stealth Geiger counter for those who need one, in a tough and durable watch.