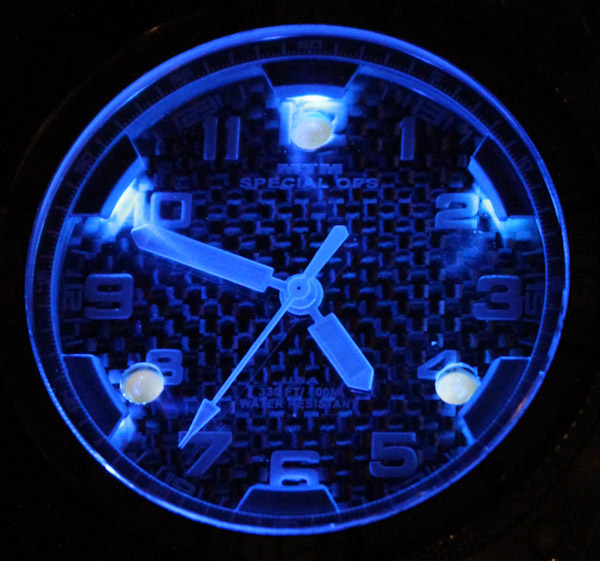 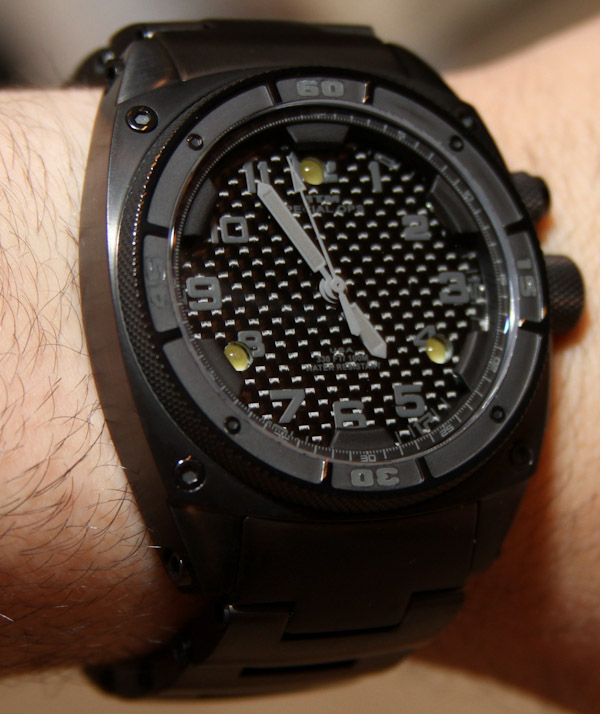 The point of this watch is either an idea you’ll immediately love or dismiss. For tactical and utility purposes, this MTM Falcon watch has a dial which turns into a light. It started with the MTM Hawk collection and evolved here in the Falcon range. These are special proprietary designs and movements which offer the wearer a serious light on the wrist. Whether you are flagging down squad mates or trying to see your keys in the dark, this is a useful piece of tech that just misses being nerdy.

MTM as a brand makes a series of “tactical timepieces.” Actual or weekend warriors can get a kick out of these durably built quartz watches. The Falcon is among their more elegantly designed watches, and is reviewed here in its “Black on Black” style. As a “phantom” black on black watch, the dial is remarkably easy to read. Don’t worry, MTM offers this model in other styles with more traditional dials that are easier to see. Still, I quite like the look of the piece. Why is it legible? It is because of the many textures and shades of black used. The dial, numerals, and hands are all different shades of black with different textures. The dial is actually carbon fiber, while the matte finished hands and hour numerals contrast rather well making it easy to see. 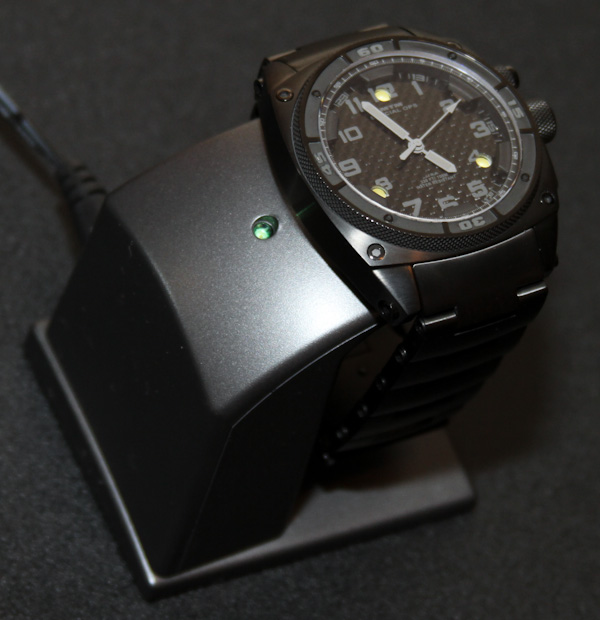 Want to see the dial even better? Then unscrew the second crown located at 2 o’clock to activate the LED light system. Right on the dial are three LEDs that can emit a blue or white light. According to MTM there are five different light modes. There is basically “on” for 20 seconds or another mode being on until the battery runs out – each for both colors. The fifth mode is a strobe effect for the white light. The lights are really impressive in terms of their brightness given that they are coming from a watch dial. The blue light is less powerful and basically designed to let you see the dial easily in the dark. The white light is designed to provide modest area illumination as well as to be visible from afar. You aren’t going to light up a room with it, but it is enough to shine light on objects in front of you, read documents, and see the ground. With a full charge, MTM claims a few hours of use.

Pressing that upper pusher cycles through the light modes. The fact that it locks is helpful so that you don’t accidentally turn it on and waste the battery. Inside the watch is a rechargeable lithium ion battery. To be honest, I am not sure if there is one battery, or two in the watch (one for time keeping and one for the lights). MTM rates the battery life at 10 years, which is common for lithium ion batteries that only need to power a quartz timing mechanism. My presumption is that there are two batteries in the piece. What I do know is that the Falcon watch has been designed with easy recharging in mind. Supplied with the kit is an induction charging stand for the Falcon. Using an A/C adapter you can charge the watch simply by setting it on the base for a few hours. Without using the light, the battery probably lasts a very long time. Given “a few hours of battery life,” it is a good idea to either bring the charger with you, or charge it up if you are going to be away from the charger for more than a couple of weeks and think you’ll be using the light a lot. MTM specially developed this system, and it is about as convenient to use as is thinkable given the fact that you need to recharge it. LEDs might suck less power than traditional bulbs, but are still thirsty little lights when they are this bright. 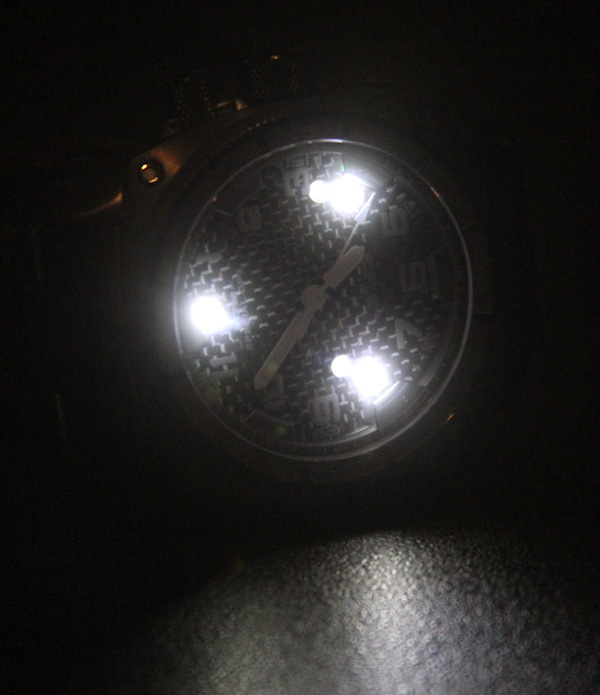 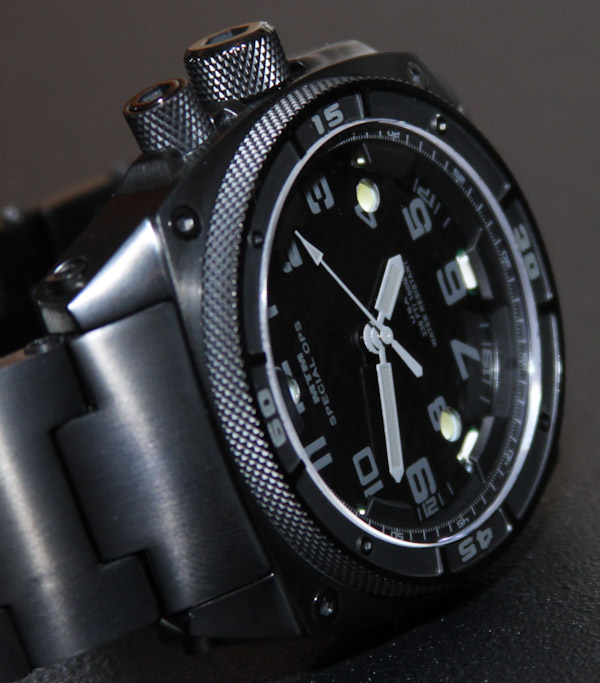 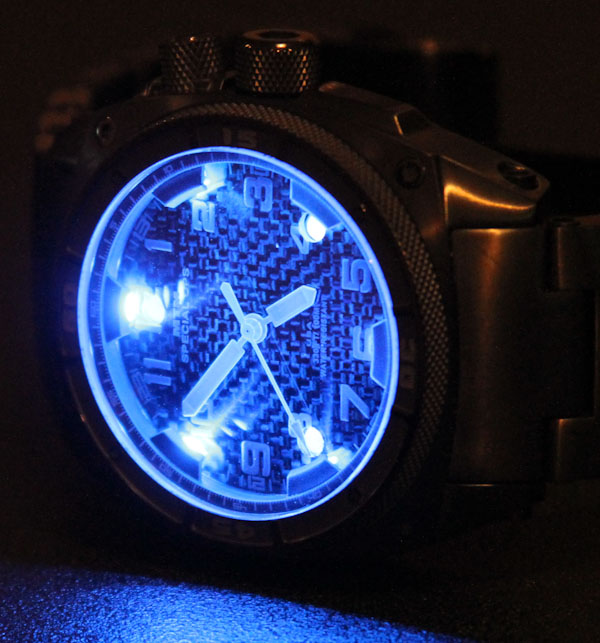 The watch dial’s legibility is barely compromised by the lights, and it is easy to look past them when they are not turned on. While I feel that the hands should have been longer on the dial, the case is rather easy to read and presents as masculine, no nonsense design feel. This version of the Falcon has a titanium case that is 44mm wide. The entire case is coated in a black DLC coating. DLC stands for “diamond like carbon,” and is very scratch resistant. However, even though the case and bracelet are titanium, this is not an overly light watch given the size and weight of the internal components. Though I wouldn’t call it heavy either. Those looking for a more out-of-the-way watch might want to replace the metal bracelet with some type of rubber strap on the Falcon.

MTM designed the Falcon to be a large masculine watch. A piece like this has 44mm of width looking its largest. This is because of the very wide lug structure and actual cushion shape of the case. The case thankfully has a diver’s style rotating bezel as well as a water resistance of 100 meters. I think it would have been cool to get the water resistance up to 200-300 meters, as well as make the light function work under water – that would have been cool. The crystal is anti-reflective (AR) coated sapphire. 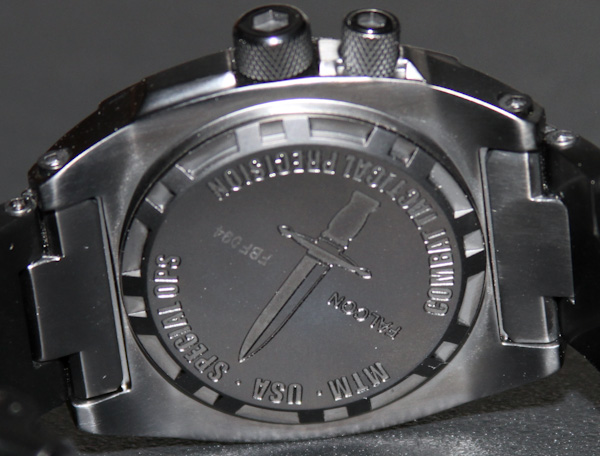 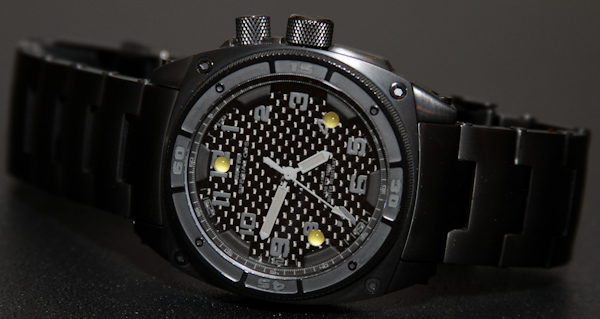 MTM is an American company based out of here in Los Angeles. You get that nice “USA” label on the back of the case in addition to their dagger logo. I think they should supply a dagger like that with the watches. You do however get a nice Pelican case carrrying box. Those cases are damn useful actually. Inside the MTM Falcon as I said is a custom made movement for MTM. It is quartz, and I believe Japanese. The Titanium Black on Black Falcon is among the more expensive pieces in the collection at a price of $950. The Falcon pieces however start at about $550 in steel. This piece might be worth the additional expense because the combo of titanium and DLC coating offer reduced weight without the easy scratching you usually get with naked titanium. You can get this and other MTM timepieces via their website here.