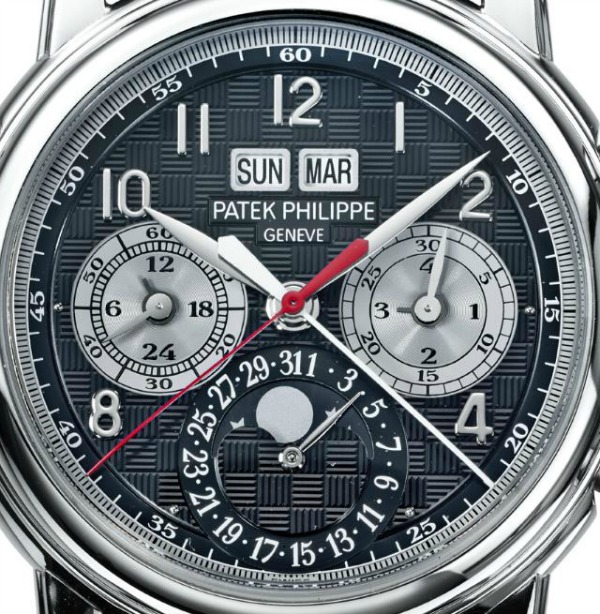 The 5004T is a relatively small watch for men at 36.7mm wide. In my opinion Patek Philippe’s follow-up model to the 5004 was the 5204 from 2012 (that I wrote about here). The 5204 contained the same mixtures of split second chronograph and perpetual calendar complications, and arrived in a 40mm wide 18k white gold case with beautiful oxidized black hands and hour numerals. It arrived just a year or so after Patek Philippe discontinued the 5004 family that was produced for many years. This piece unique model of the 5004 for Only Watch 2013 has some interesting features that you aren’t likely to see on many higher-production Patek watches. One thing I really like is the dial. Produced from a solid piece of gold and hand-machine engraved, the dial has a fantastic textured checker board motif in black that mixes nicely with the applied 18k white gold Arabic numeral hour markers.

There is also the matter of the strap, which is going to be controversial, but fits the special “one-of-a-kind” nature of this watch. Calf leather with a weaved carbon fiber pattern top matched with red contrast stitching, it looks a lot like something you’d find on a much less expensive watch. That isn’t to say that Patek hasn’t chosen the best quality strap of this style, but it is something that has been rendered in inexpensive ways too often. Patek wants you to feel as though this is a sports watch, especially with that red seconds hand. In all, the color and textures are quite uncharacteristically Patek Philippe, which is probably the idea behind offering it for the upcoming charity auction. The 5004 never contained a totally in-house made movement. Patek Philippe used and uses for the 5004T, a base Lemania that has a perpetual calendar module by Patek Philippe, and is thoroughly decorated and finished by Patek Philippe. It is the caliber CHR 27-70Q. The manually wound movement is gorgeous and complicated, and the watch comes with both a solid titanium caseback, as well as a version with a sapphire crystal exhibition window.

I think it is interesting that Patek Philippe decided to use a 5004 watch as the base of its Only Watch 2013 offering. The movement is something that they freely admit is not totally produced by them. There is nothing wrong with that, but it comes at a time when Patek Philippe is quite militant about keeping details about its suppliers secret and closed. That is a shame because the Swiss watch industry is really a community of quality companies working together, and there is no manufacturer that truly makes everything in-house. Not even Rolex or Patek Philippe.

While the 5004T is a strange Patek Philippe, it is nevertheless a very attractive watch. Its unusual nature will make it all that more desirable to collectors, and I anticipate an auction price of at least 700,000 Euros at the Only Watch auction in Monaco this September. UPDATE, with an auction estimate price of between 400,000 – 600,000 Euros, the Patek Philippe 5004T received 2,950,000 Euros at auction (about $4,000,000). patek.com