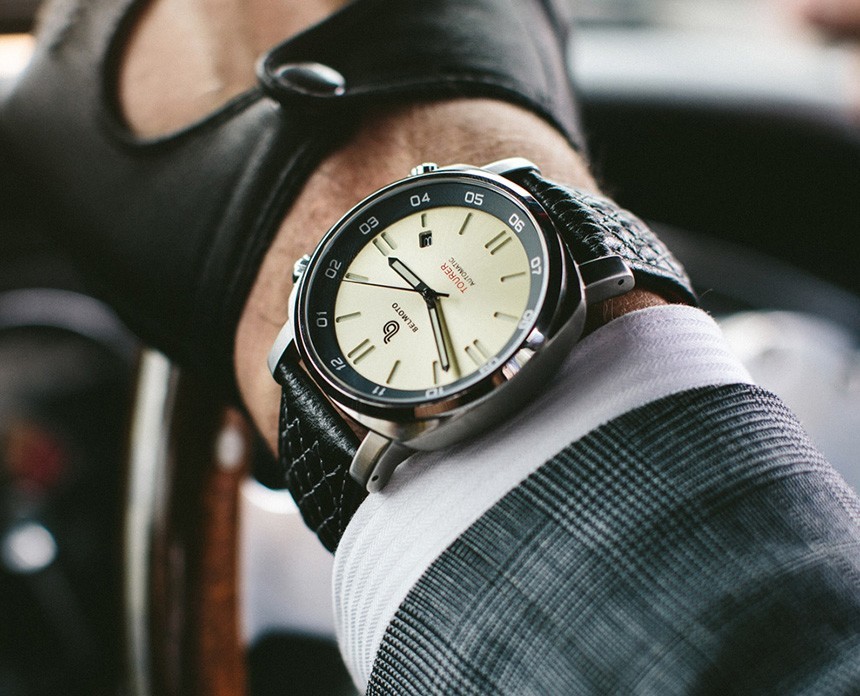 Just announced, this is the new retro-inspired racing-themed brand, Belmoto, from the creator of the small but popular independent watch company Magrette. Belmoto expands on Magrette’s retro military and dive designs, but now with a vintage car and racing theme… and a decidedly more polished image. The new brand launches with two lines, the three-hand automatic Belmoto Tourer and the Belmoto Track-Day quartz chronograph, and we will take a look at each today, along with pondering this new company’s roots and future direction. Why a whole new brand? And can we someday expect an aviation-themed brand to round out the package?

It’s necessary to begin discussing Belmoto by looking at Magrette. Magrette was founded in New Zealand by Dion McAsey, an enthusiast and collector who succeeded with the online and forum-based watch lover community by offering an enthusiast’s attention to detail and quality with affordable prices – all made possible by a worldwide sourcing network. Considering what a relatively small brand they are, it is testament to Magrette’s popularity and our esteem for their products when you look at just how many Magrette watches we’ve covered here on aBlogtoWatch. Those familiar with Magrette watches will easily recognize the design continuity in the new Belmoto watches. For example, see Patrick Kansa’s recent Magrette Dual Time review here for comparison – it is almost identical to the Belmoto Tourer. Even the Belmoto logo seems to reference that of Magrette. So, why a whole separate brand rather than offering these pieces under the Magrette name? We can conjecture that they wanted to set the new Belmoto watches apart and maintain a focused identity for each brand. Style and theme aside, part of the reasoning may have to do with a certain interesting and unique feature of Magrette watches, and that is that all of their models are limited editions of only 500 pieces. There is nothing in the Belmoto materials to suggest the same limited nature for their watches; perhaps, that marks a new level of both confidence and production capacity for the company. Also, Magrette timepieces are exclusively mechanical, while Belmoto launches with a quartz chronograph, along with a mechanical three-hand. Part of the charm of Magrette is their straightforward, independent character as a watch brand with a focus on value, built from the ground up by a driven watch enthusiast for a fellow-enthusiast audience. That all seems to carry over into Belmoto watches, but one wonders if the slick website with its heavy lifestyle push won’t put off traditional Magrette fans. We recently featured an in-depth editorial on why lifestyle marketing is ineffective for watch enthusiasts, but as long as the quality remains, the same enthusiasts will likely recognize that. These are actually pretty good-looking watches, despite that I wouldn’t plan on wearing them with a three-piece suit while racing a (spoiler alert) chick on a motorcycle in an old Austin-Healey car, as in Belmoto’s video. I rather like the Belmoto Tourer, actually. The vintage car theme is a rich well of imagery and inspiration, so it makes sense that an entire watch brand could be built around it, as Autodromo has done. Even for me, while I’m not particularly a “car guy,” it is an attractive aesthetic.

A quick run-down: With four versions of the Belmoto Track-Day quartz chronograph and three versions of the three-hand automatic Belmoto Tourer watches, each comes in a 200m-water-resistant, cushion-shaped 42 millimeter steel case with screw-down crowns, using a sandwich-style dial with C3 luminant, under a domed and AR-coated sapphire crystal. They each feature the date, along with a dual-time “complication” via the inner rotating bezel, and the versions differ in terms of dial colors, case finishings, and straps to match those things. The Belmoto Tourer is, on the other hand, powered by the Miyota 9015 automatic movement that can be viewed through a tinted display caseback. The 9015 is highly regarded as a more premium mass-produced Japanese automatic movement that is often claimed as parallel in many ways to the ETA 2824 but at a lower price – you can read more about it here. It appears that there is a steering wheel-shaped frame between the display caseback and the essentially undecorated movement – no signed rotor here (except by Miyota), but that is still preferable to completely covering it up. Funny that there are a number of small independent watch brands that are all value-focused, aimed at the online community, frequently use Miyota 9015 movements, and are often distinctly vintage-themed. Tempest, Helson, Halios, and more… Benarus and Raven come to mind, who, like Magrette and Belmoto, are also sister companies. In other words, there is a lot of competition. And while choices are a good thing for value-conscious consumers, shopping in this neighborhood will require looking closely at a lot of small differences to make a choice. But there is no comparison more relevant than Autodromo, whose products are not only in a similar price bracket with many similar specs, but who are one of the few other brands out there exclusively focused on this vintage race car aesthetic. All these comparisons aside and the marketing stripped away (and that is likely a worthy mental exercise), the watches should be able to speak for themselves. Magrette has proven themselves over the years, and can only have expanded their production capabilities and refined their quality and designs to arrive at this point. So it’s safe to say that those who liked Magrette and find the vintage racing style appealing will probably also be satisfied with these. If you want to go deeper into what these watches and the company are all about, I recommend going through our many Magrette articles.

The seven total Belmoto models come variously in steel cases as well as black PVD and rose gold, and with different color schemes and nice-looking leather straps, perfect for driving your vintage race car. Regardless of case-finishing or other differences, all the three-hand automatic Belmoto Tourer watches are US$700, and all versions of the Belmoto Track-Day quartz chronograph are US$500. The first Belmoto watches will begin shipping January 5, 2016, and… Belmoto is offering a 20% discount on preorders up to December 31, 2015, by using the promo code “DRIVER20” at checkout. belmoto.gt