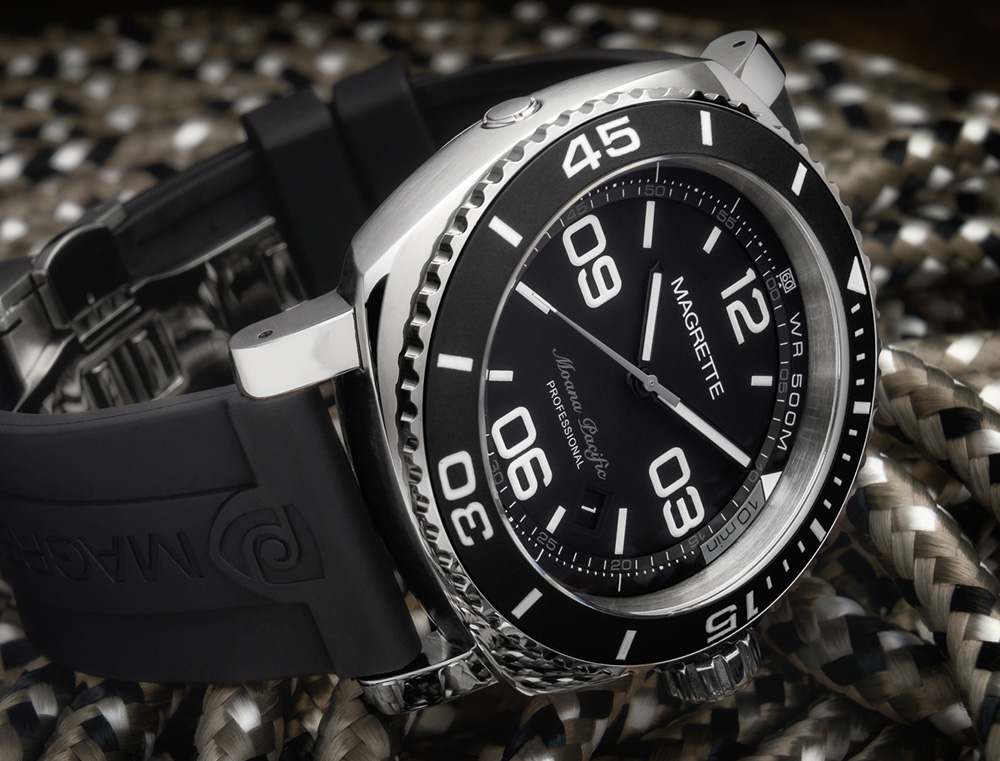 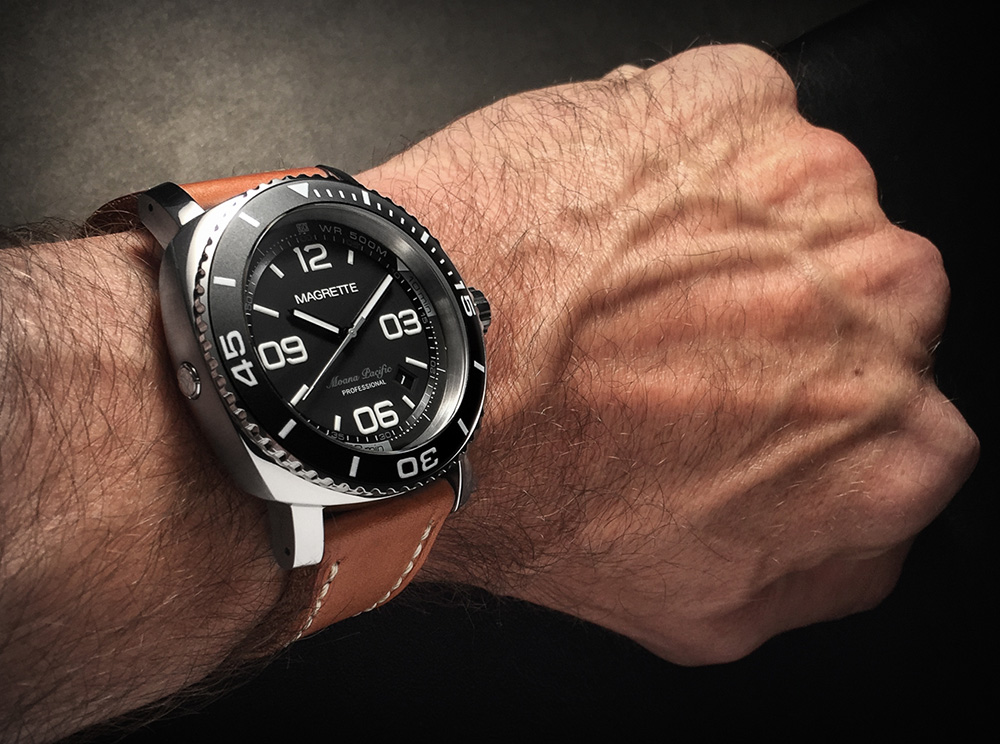 Now in its tenth year of operation, it’s almost unfair to call Magrette a “micro” anymore, as the Auckland, NZ-based brand has earned its place at the table and continues to impress with affordable, original designs that have maintained their staying power in an increasingly crowded space of independent watch labels. Further solidifying the brand’s reputation is an update to its flagship Moana Pacific Professional – a 44mm diver that’s still as affordable as ever, but is now powered by a Swiss-made STP movement, and finished with a brushed-steel and fully lumed, DLC-coated bezel insert. 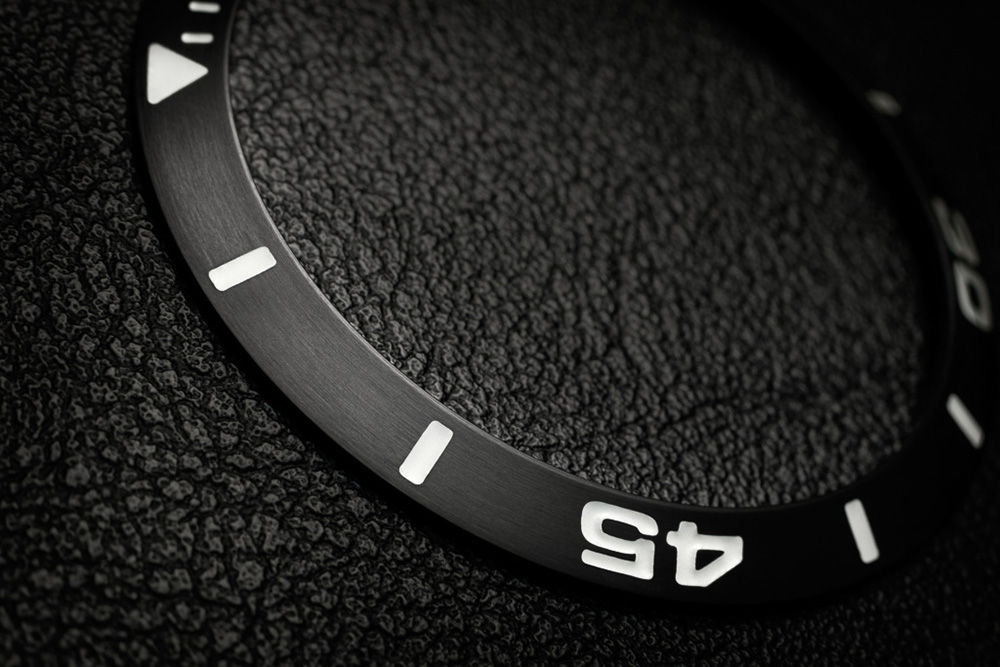 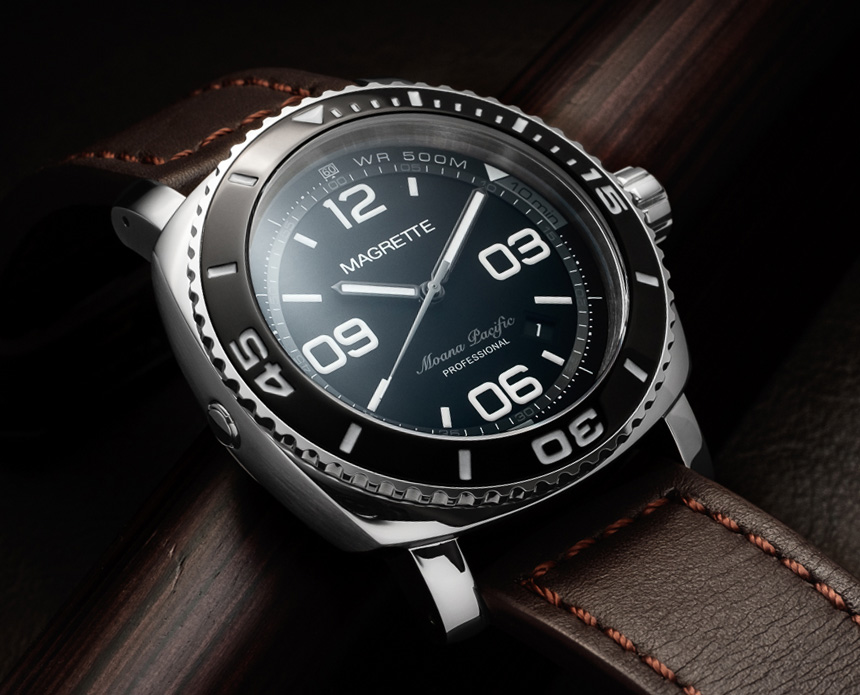 Unlike earlier iterations of the Moana Pacific Professional which ran on Miyota 9015 movements, the stealthy new “MPP” is powered by a Swiss Technology Production STP1-11 automatic movement – which, if you remember, is the Fossil Group’s answer to breaking the Swatch Group’s stranglehold on movement production and distribution. The STP1-11 is a Swiss-made ETA 2824 clone with the usual specs (26 jewels, 28,800vph, around 40 hours of power reserve), engineered as an alternative to the Sellita SW200, and assembled in one of the most advanced mechanical watch factories we’ve ever visited in Switzerland.

Granted, STP may be Fossil-owned and -operated, and the movements predominantly supplied to Fossil Group watches (like this Zodiac Seawolf reviewed here), but we’re starting to see more examples of STP filter down into the hands of smaller, independent brands like Magrette – which is great news for watchmakers and collectors alike, who seek an affordable, Swiss-made alternative to Sellita or Soprod movements. 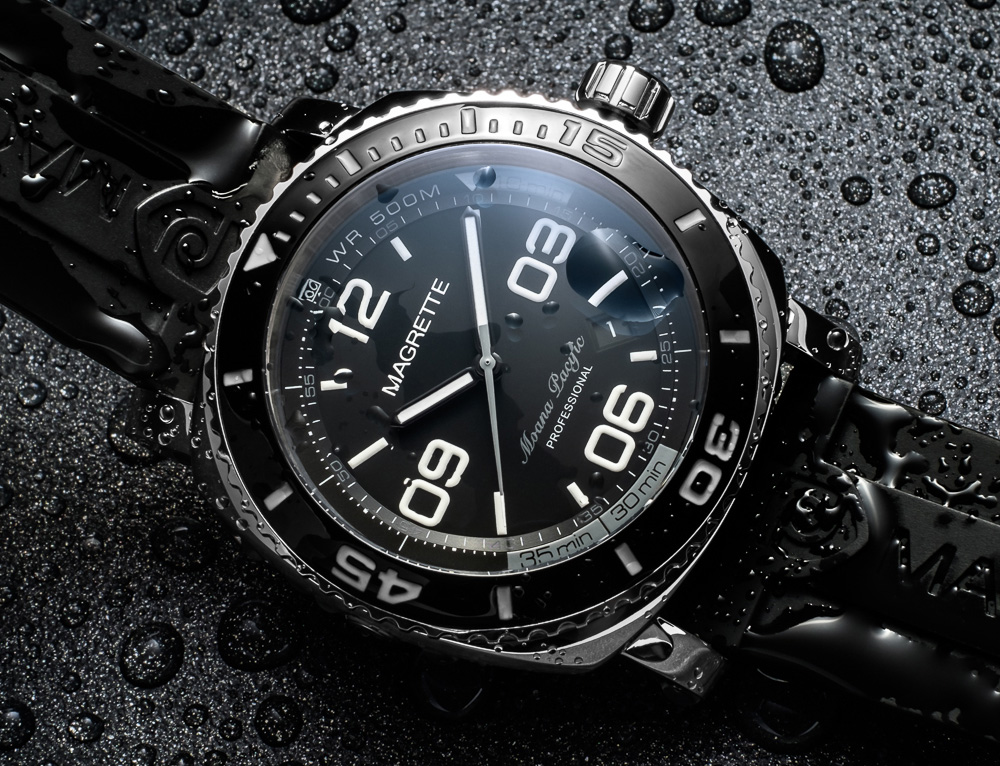 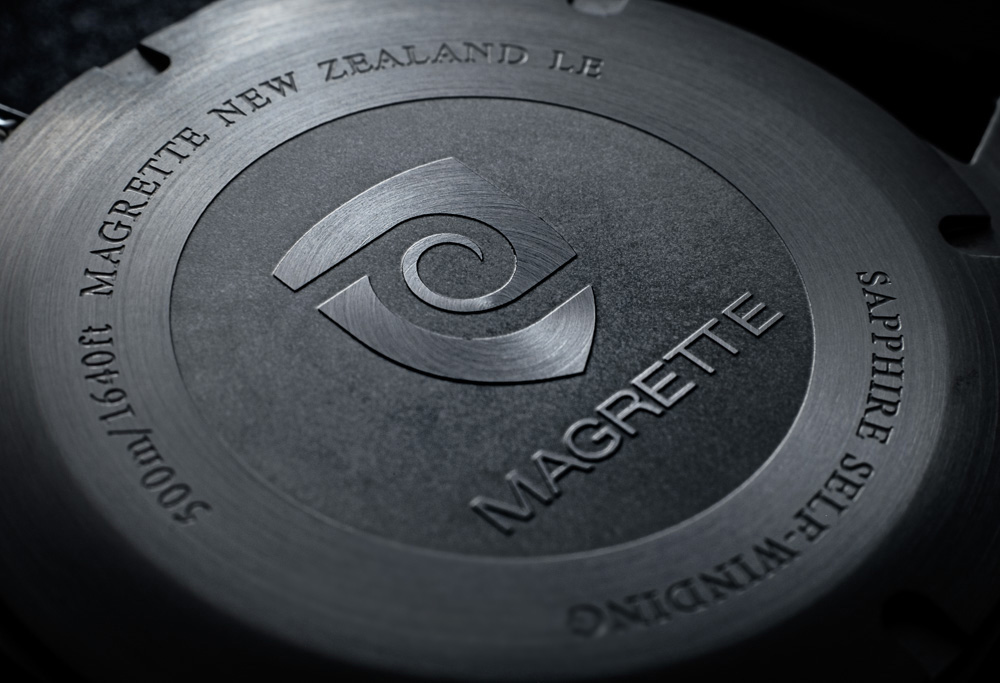 On paper, the changes to the Magrette Moana Pacific Professional are relatively minor – partly because the new movement will be hidden beneath the signed solid caseback, sealed with Viton gaskets. But visually, the new DLC-coated bezel and its engraved markers filled with high-contrast Super-LumiNova BGW9 perfectly complement the lume on the dial. Furthermore, the dark, brushed finish of the bezel itself works well with the steely tones in the chapter ring, lending the Magrette Moana Pacific Professional Black a decidedly classic, tool watch feel that was largely missing from the currently available Magrette collection. 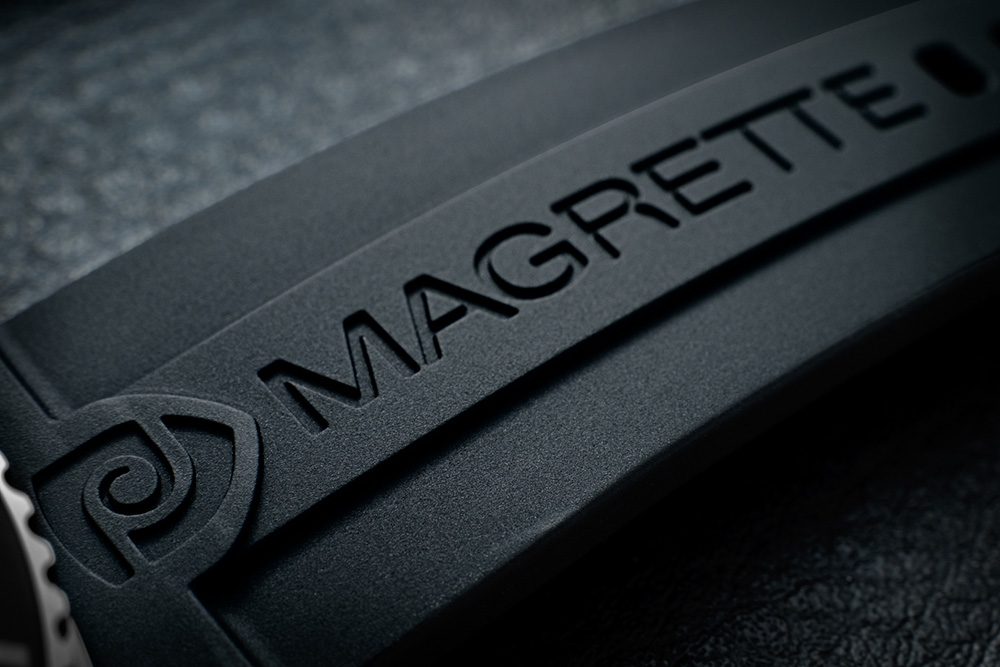 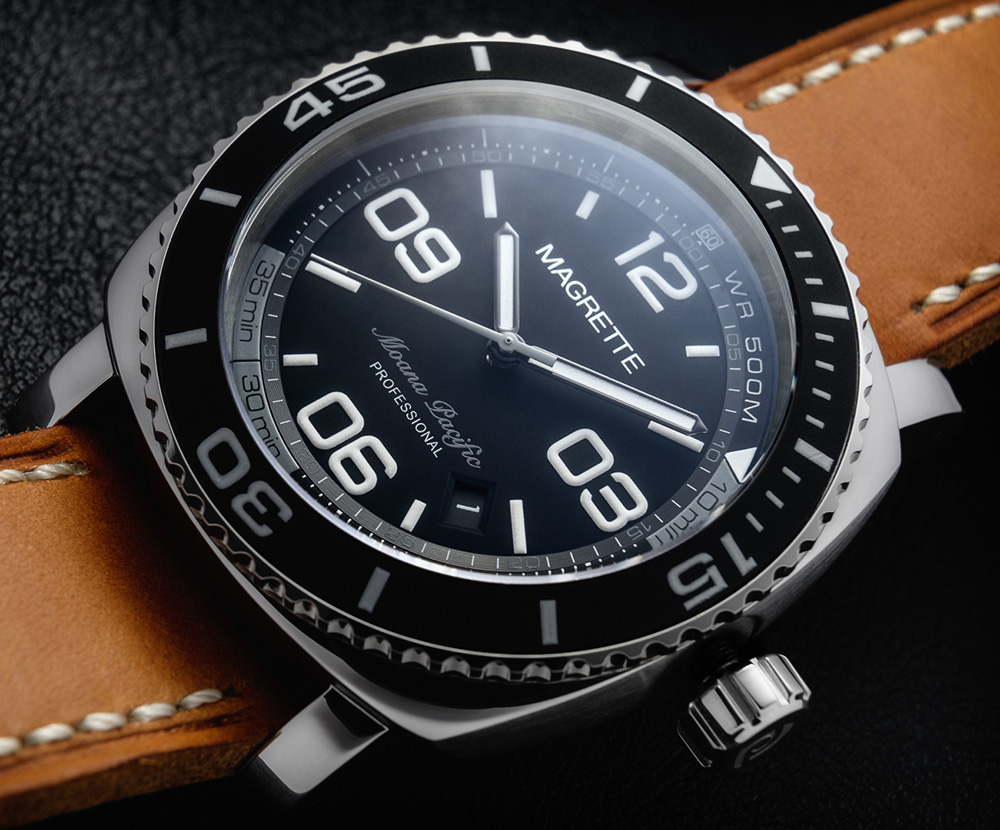 As Magrette has done in the past, the Magrette Moana Pacific Professional Black will be available on a pre-order basis, with an expected completion date around late February 2017. Those looking to queue up for one of the 500 pieces in the limited-edition series can expect to receive two additional straps (one leather, one nylon zulu-style) accompanying the rubber strap in the package, and enjoy a special pre-order price of $545. magrette.com