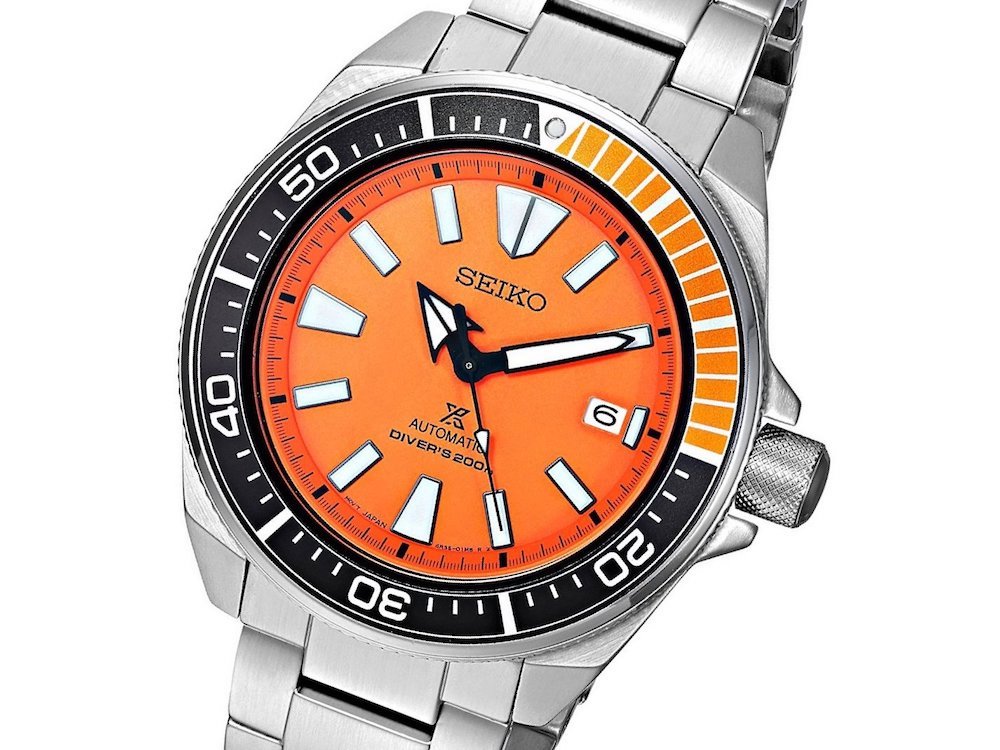 Today, Seiko has released the Prospex “Orange Samurai” SRPB97 watch for the USA market, and for now as an Amazon.com pre-order exclusive. Seiko has not held back on rereleases capitalizing on the cult status of certain watches including vintage pieces but also even very recent models – such as the very recent Grand Seiko Hi-Beat 36000 GMT Limited Edition SBGJ227. The original diver’s watch that was apparently nicknamed by the public as the “Samurai” was released only in 2005 and included an orange dial version, the SBDA005. This new Seiko Prospex “Orange Samurai” SRPB97 recalls that model with the orange dial, but with updates and changes reflecting the current “Samurai” collection of dive watches marked by their angular case design.

Introducing the latest #SeikoDiver to join the #Prospex family. The new #SRPB97 is equipped with the historic hand-set and angular case details adored by Seiko enthusiasts worldwide, and updated with a vivid orange dial. #OrangeSamurai Available exclusively in the USA on @amazon. ???????????? Visit the link in the bio to learn more. #SeikoStyle #Prospex #SeikoDiver #SRPB97

Seiko has had a number of orange dial watches get kind of “famous” among watch enthusiast communities, not least the “Orange Monster” SKX781 – which came back in 2012 as the SRP309 along with other color versions such as the Seiko SRP313K1 reviewed here. It was Doxa, however, who started the trend back in the 1960s with something like this recently also rereleased DOXA SUB 300 Black Lung. These orange dials are eye-catching and make for a bold dive watch with personality, of course, but it has also been claimed that the color is more legible underwater. Water affects colors of the light spectrum, with red disappearing first and yellow remaining visible deeper. So orange being a mixture of red and yellow is not necessarily the “most legible” but the bright, near-florescent colors often found on watch dials are going to be easy to see in most conditions, to say the least. In the end, contrast will be more important than color for legibility, and seiko dive watches, always amply lumed, do well in that regard. As noted, the orange dial seems to reference the original release, but the rest of the specs and design are in line with current Seiko “Samurai” collection watches. For all about the samurai in general, see our review of the Seiko Prospex “Blue Lagoon Samurai” SRPB09 here. Most notably, the hands and markers are different from the 2005 model, but the angular case and distinctive bezel are pretty close to the original. Another major difference is that these are larger at 44mm wide and 12.8mm thick in steel – while the original models were 42mm wide in titanium. The current Samurai watches have 200m water-resistance, a hardlex crystal up front and solid caseback with the Seiko 4R35 automatic movement inside that operates at 3Hz with a 41-hour power reserve. The Samurai was discontinued in 2008, and Seiko themselves sometimes seem surprised by the popularity and cult status of their own watches that they had mostly designed as pragmatic, affordable products. With droves of passionate collectors chatting on the internet, however, Seiko has slowly woken up and achieved a kind of self-awareness, and the past year or so has seen more nostalgic rereleases than ever as well as more watches meant to compete with Switzerland. There are surely benefits that go along with this, such as listening more to their fans, wider availability, broader recognition of the brand’s qualities, and even more variety (as if Seiko ever lacked that) including premium options and features. Watches like the the Seiko Prospex “Orange Samurai” SRPB97 and many in the Prospex collection in general, in my opinion, stay true to Seiko’s spirit of well-built watches and value proposition. Seiko does a lot of regional limited editions and special releases, often even with more premium features or funky colors, such as this Marinemaster 300M SLA015 Limited Edition that was sold only in Germany. Unfortunately for everyone else who is into the Orange Samurai, this particular special edition is intended for the US. The Prospex (professional + specifications) line seems to be the home for a lot of these special releases and exists as Seiko’s lower mid-range offering more refined and durable sport watches for good values – ostensibly intended for “professional” use but probably destined for the wrists of collectors in many instances. Again, the Seiko Prospex “Orange Samurai” SRPB97 is available first for pre-order on Amazon.com and later at authorized Seiko dealers in the United States in 2018. The online purchases through Amazon will come on a steel bracelet with an additional rubber strap that will not be included when bought through standard retail. The Seiko Prospex “Orange Samurai” SRPB97 has a price on Amazon of $575 with preorder now and will be officially released November 13, 2017. seikousa.com