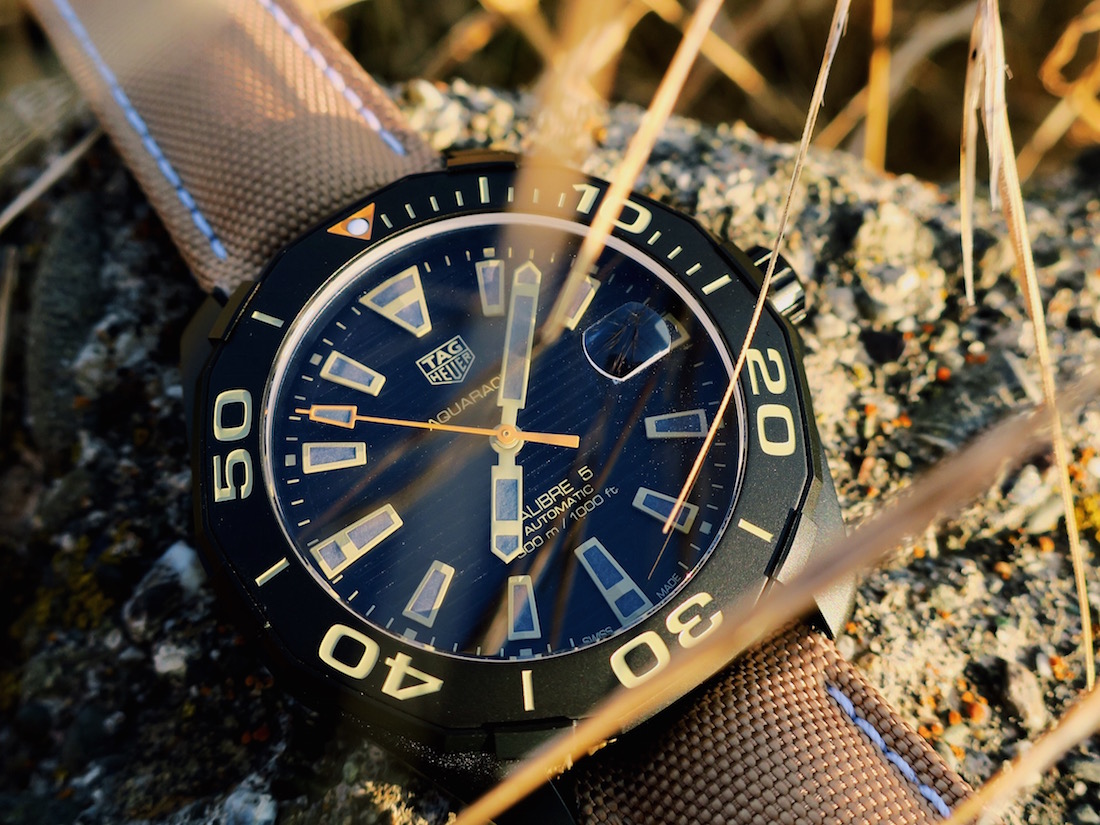 “One-point-five hours hiked at three miles per hour means I should be there in less than a half an hour…” I complete the mental calculation and return the TAG Heuer Aquaracer 300 to my side where it all but disappears against the canyon walls – black-on-tan livery camouflaged against the dark rushing water and sharp, sandstone crags in a place where panhandlers once thrived. This is gold country. Or rather, it was gold country. Founded in 1849, French Gulch was the terminus of the western branch of the California Trail and one of the Golden State’s richest regions at the height of the Gold Rush. Nowadays, it’s a thirsty husk of its former self – a classically ramshackle western dive, boarded up and bleached by the sun. Revealed at Baselworld 2016, the TAG Heuer Aquaracer 300 Caliber 5 Titanium WAY208C reference seemed a fitting match for a trek up the canyon, whose rugged outcroppings are cleaved in two by the meandering waters of Clear Creek. This stealthy “desert diver” was a quiet addition to TAG Heuer’s 2016 Baselworld announcements, seemingly lost in the wash of all the attention showered on the Connected smartwatch and this sub-15k tourbillon. But just like panhandling, the real nuggets are often discovered in quieter eddies, far from rushing waters and probing eyes, crowded around the sluice. I’ve always had a soft spot for the TAG Heuer diver, but maybe it’s because we’ve always quietly shared a similar growth trajectory. Not only were we products of the early 1980s, we both cut our teeth in the water, nurturing a penchant for exploration. We also both endured some particularly awkward growing pains of our teenage years, though emerged a little more well-rounded, and probably better for it. Regardless of the similarities in our narrative, my longstanding appreciation for the TAG Heuer Aquaracer has plateaued with the 300-meter Caliber 5 – a thoroughly modern, solidly built sports watch, and what some might argue to be TAG’s most distinctive, yet cohesive diver ever. Even at a glance, it clearly carries the design DNA of a TAG diver, but gone are traces of the early days of riding Submariner coattails, or the confused, avant-garde period that followed. After some 30-plus years, we now have a watch at its apex, confident in its own skin between function and contemporary form while also making a compelling case for value in an admittedly crowded segment. But most important is how the WAY208C still feels fresh – even with what amounts to a palette swap from the standard TAG Heuer Aquaracer 300, and the third in a trio of admittedly eyebrow-raising treatments. Contrary to many other comparable divers in its segment, the TAG Heuer Aquaracer’s desert diver tones eschew vibrant reefs and coral sand beaches, instead conjuring rocky peaks and arid plains punctuated by the brisk relief of a high alpine swimming hole. It’s really the first TAG I’ve seen in a great long time that does what any good dive watch should in two steps: first, capturing the imagination with strong visual cues grounded in real-world palettes, before delivering on those cues with practical capability, like an ultralight titanium case, 300 meters of water resistance, and a titanium carbide coating (applied through physical vapor deposition) that’s ten times harder than steel. PVD is hardly a new treatment to tool watches like the TAG Heuer diver – whose earliest PVD models date back to the origins of the brand’s submersible offerings. Granted, as over 30 years and hard wear of those models ultimately revealed, PVD will inevitably show signs of weakness. However, the modern TAG Heuer Aquaracer 300 takes additional measures to slow this process – by using titanium which holds PVD coatings better than steel, and softening many of the case edges, where sharper angles are more prone to higher wear. The end result is a silky smooth, ultra-matte finish that shrugs off scuffs against rocks and branches (and the occasional slip of the springbar tool), lending further credence to the notion that this TAG Heuer Aquaracer is built for more than just looks.