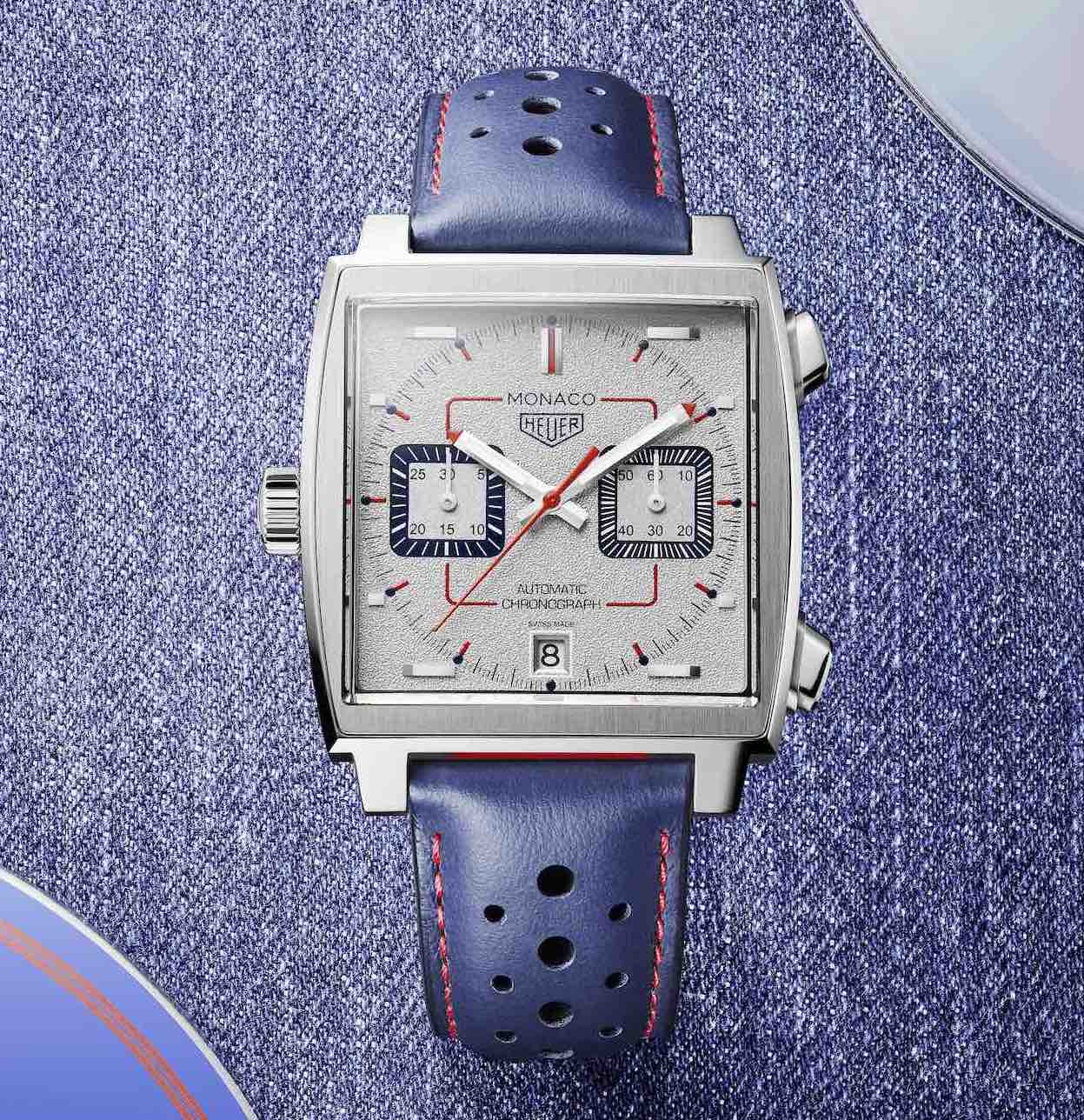 We’ve reached the halfway point of TAG Heuer‘s 50th-anniversary celebrations of the Heuer Monaco, and we’re getting ever closer to the modern day. The latest edition is limited to 169 pieces to celebrate the year 1969 when the watch was released. So far, TAG Heuer has released two of five planned special editions, with each one tackling a different decade. We’ve already seen the laid-back green of the 1970s and the surprisingly vibrant red of the 1980s, but now it’s time for something a little more somber. This time around the decade between 1989-1999 has been immortalized in watch form. The TAG Heuer Monaco 1989-1999 Limited Edition watch supposedly draws inspiration from the “straightforward street style” of the ’90s, with its modern gray dial that seems to have been modeled on the street itself. While I’m not a huge fan of the original, I very much like this grittier take on what is undeniably a sport classic. 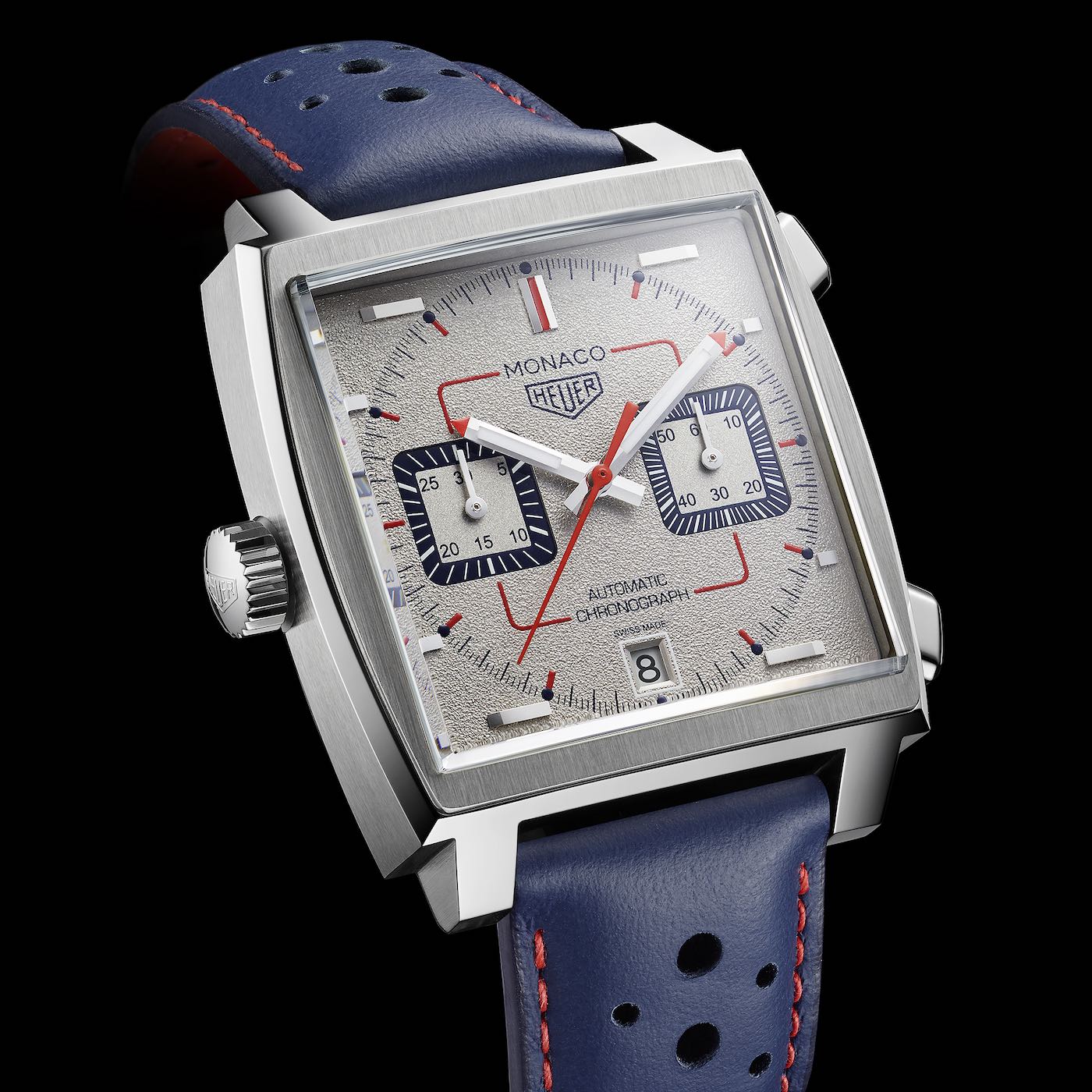 After the curvaceous experiment seen in the 1979-1989 release, the sub-dial registers have returned to their more blockish form that we’re used to seeing on the core collection. This watch is cased in a 39mm stainless steel housing with the crown on the left and pushers on the right, just like the original Monaco. 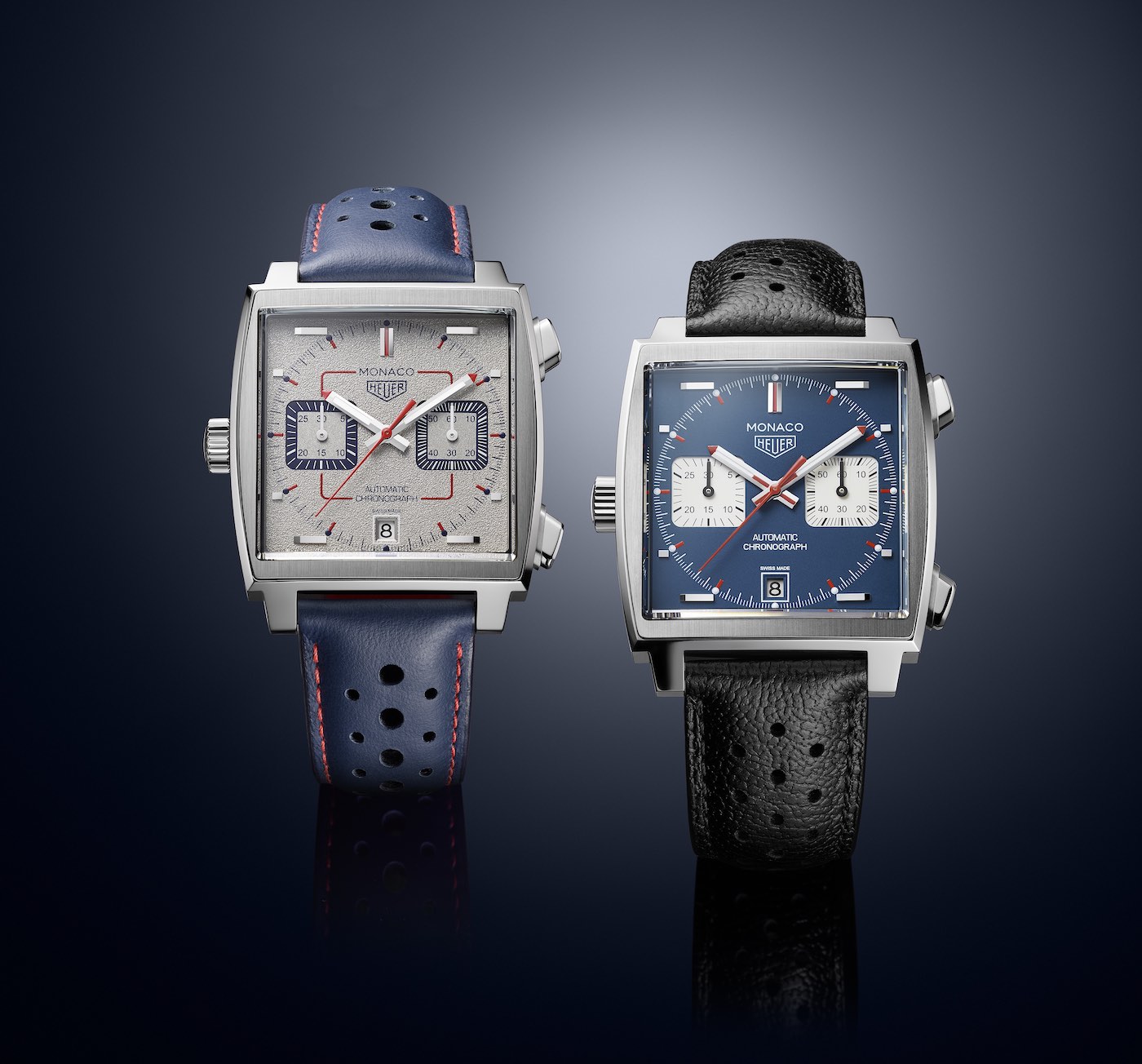 The caseback of this piece is closed and will be numbered as one of 169. What I think TAG Heuer has done very well here is the low limitation number on all such limited pieces. A brand as big as TAG Heuer, celebrating the release of a watch as iconic as the Monaco, could easily have run to 1,969 pieces of each of the five limited and had no trouble selling them all. This stark reduction of availability makes these already special dials all the more desirable. 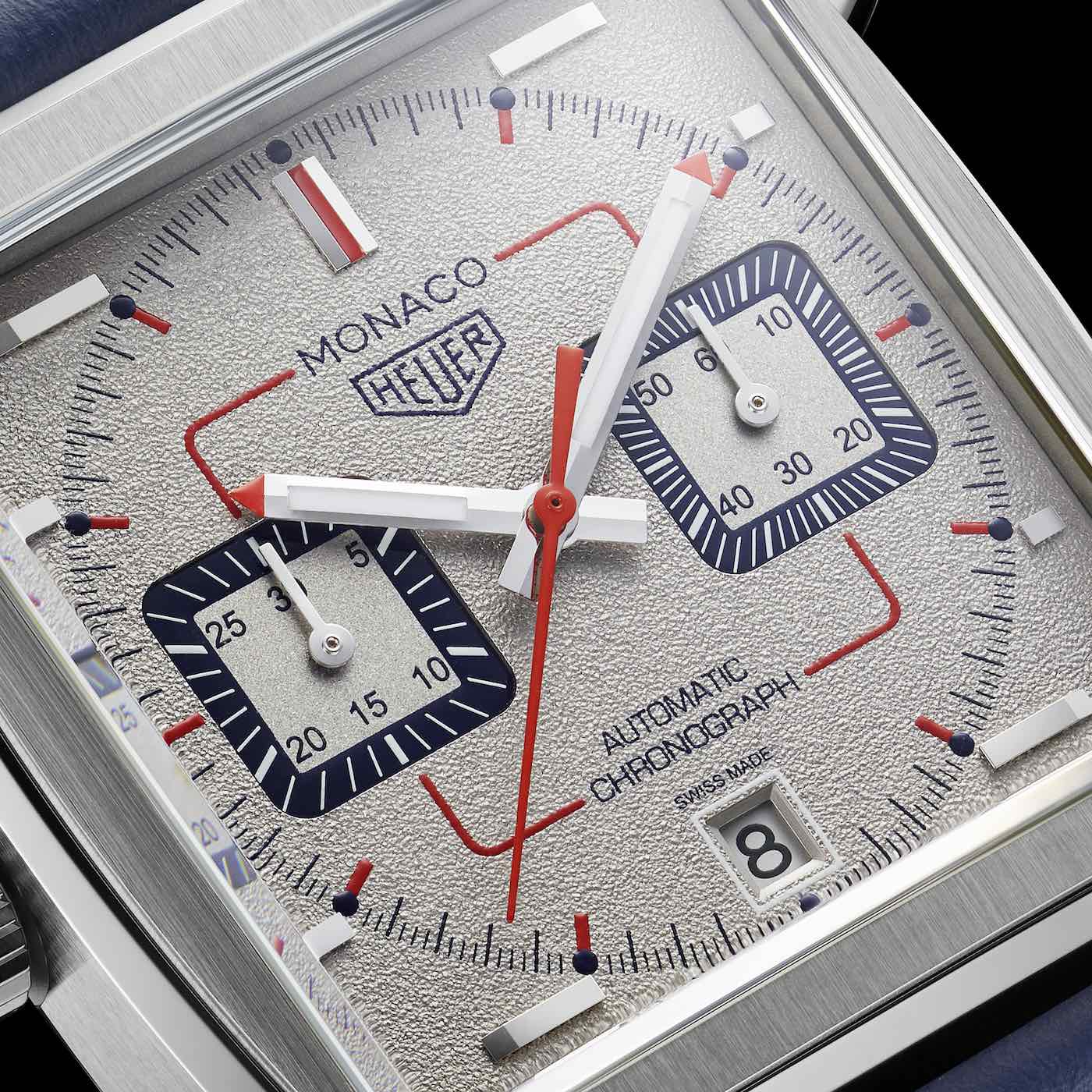 In the minds of TAG Heuer’s designers, the 1990s was clearly a decade of industry, with the concrete-effect dial dulling the mood that had risen to a colorful frenzy following the ’80s extravaganza of two weeks ago. The texture, however, is what sets this model apart for me. That, and the sweet red detailing on the dial, particularly the four curved right angles that create a red square in the middle of the dial, linking the logo, the sub-dials, and the dial text expertly, and tying the elements into the frame of the case. The Monaco is often lauded for being a circular watch in a square case (due to its dial printing and the conscious arrangement of the hour markers, which draws a circle in the subconscious despite their angularity). This watch, however, is a much squarer affair, due to the way the gray dial pulls the square case into the design with it, and that central red square that is far more prominent in the mind’s eye than the subtle blue minute track. And, in my opinion, all the better for it. 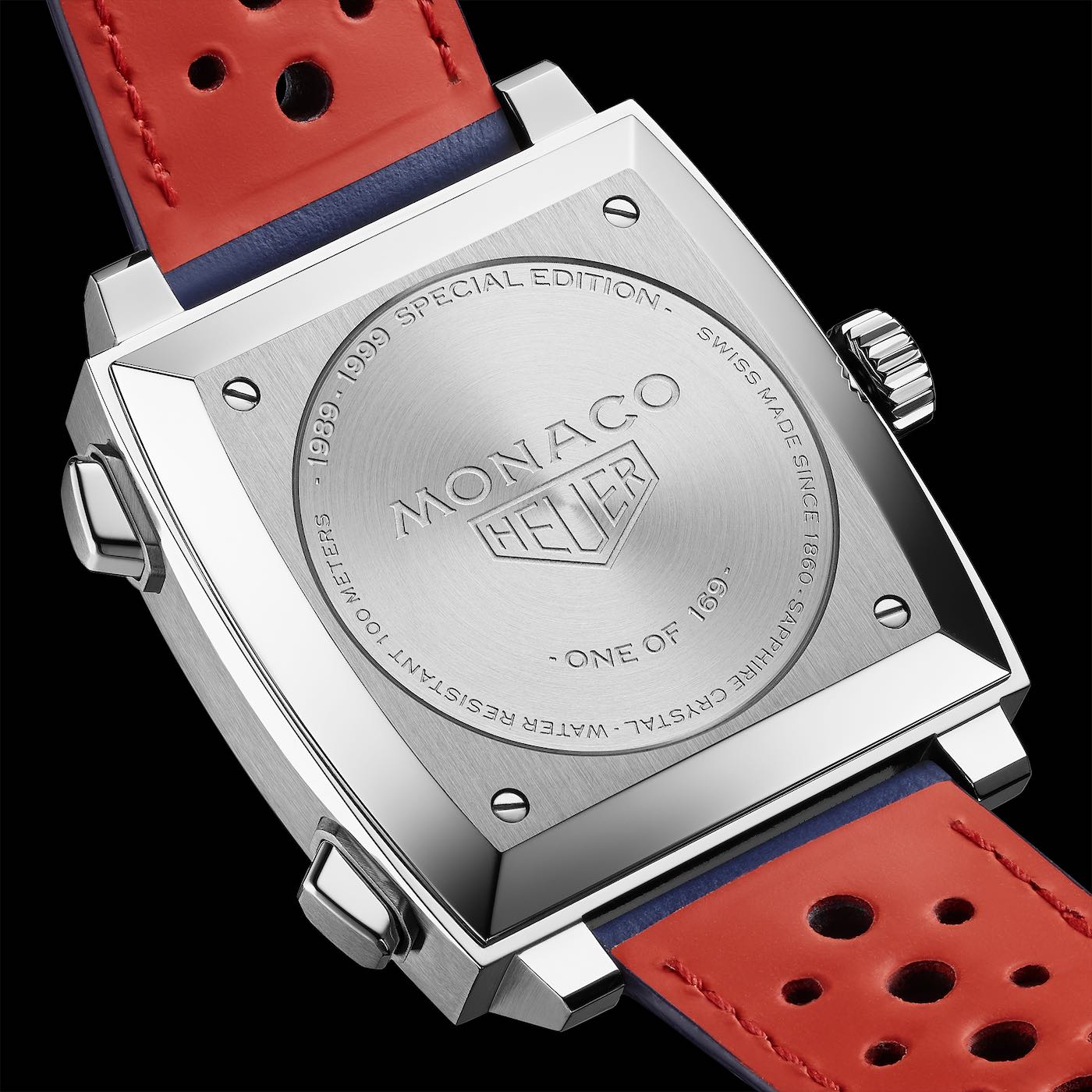 The TAG Heuer Monaco 1989-1999 Limited Edition watch is powered by the Calibre 11, which is a modern version of the automatic chronograph movement that featured in the original Monaco in 1969. And to continue with the original inspiration, the box is printed to match the colors of the decade it represents. This model is packaged in a dark blue box decorated with the Heuer logo and a horizontal check-pattern stripe. A red cushion surrounded by a gray interior completes the look. And holding the watch in place is a blue perforated calfskin strap with a red lining fastened by a truly gorgeous Heuer buckle in stainless steel. The TAG Heuer Monaco 1989-1999 Limited Edition ref. CAW211X.FC6468 is limited to 169 pieces and, as with previous models in this special-edition run, is priced at $6,550. You can learn more at tagheuer.com.