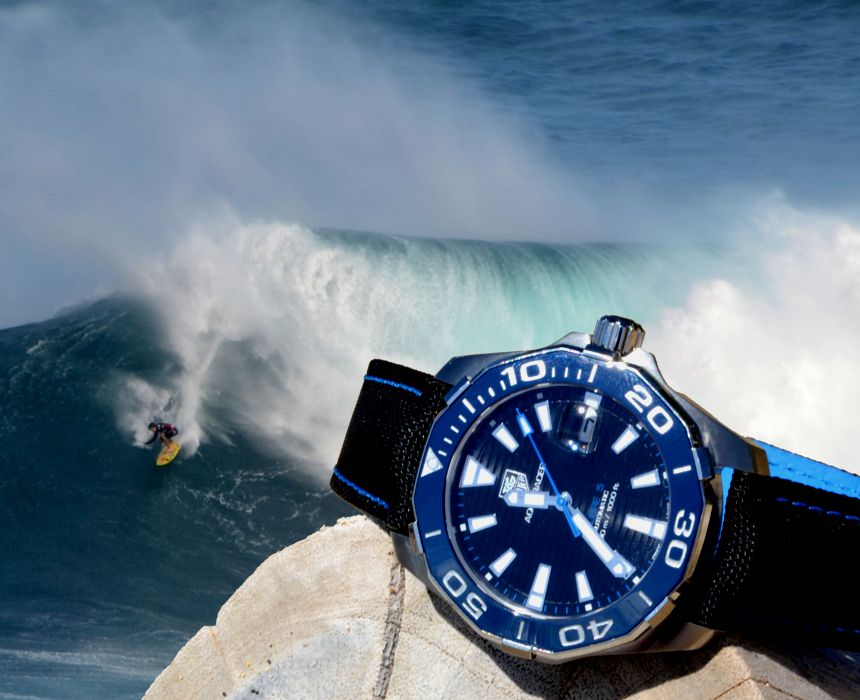 TAG Heuer‘s current tag line is “Don’t Crack Under Pressure.” And with their sponsorship of the World Surf League‘s Big Wave contests and Hawaii surfer Kai Lenny, it really rings true. On December 6th, the waves at Pe’ahi (aka Jaws) on the north shore of Maui, Hawaii, were 65ft high and the first ever WSL Pe’ahi Challenge 2015 was on. Big wave contests like this (and the Eddie Aikau on the north shore of O’ahu) are usually conducted in a single day within the open contest period.

Pe’ahi is known to surfers as “Jaws” – so named as the break can close in from both sides of the deep channel that was carved by a stream where it empties into the Pacific. And because, as local surfer Kai Lenny puts it, “Jaws can bite you.” The waves at Pe’ahi/Jaws don’t even break until the face heights get over 12 feet. On an average day, you just see rolling swells and would not know this is one of the handful of truly big wave super-sites in the world. Access to the site is not easy. There is a limited amount of cleared land (on private property) down a 1.5-mile dirt road from the Hana Highway for the contest organizers and the strictly limited number of guests – each surfer can only have 2 family members at the cliff site. And the surfers themselves motor up to the site from Kahalui harbor about 13 miles away on support boats and jet skis and take position to the west just before the massive break. But this is not a “tow-in” big wave contest. No, the surfers have to paddle over to the waves and position themselves to catch the 6-story monsters on their own and hope they don’t go “over the falls” and become a fatality. They use high-tech on-demand inflatable vests, but as Kai Lenny told us, it’s quite a sight to be underneath a giant wave and looking up at 65ft of water over your head (as you hold your breath and try to swim to the surface). The pressure is both mental and physical for the surfer, and literally a lot of pressure on a watch. TAG Heuer-sponsored surfer Kai Lenny wears a bog standard TAG Heuer Aquaracer 300M watch even while catching some of the largest rideable waves in the world. He says that as he looks down the wave with his left arm extended, his watch gives him an aiming point. He uses his watch at Jaws to time the heats (nominally an hour each). Kai has been surfing professionally for over 10 years, yet he is just 23 years old. He is an all-around athlete who’s sports include surfing, stand-up paddle (SUP) surfing (for which he is a world champion), tow-in surfing, windsurfing, kitesurfing, and skateboarding (he has his own half-pipe in his backyard). He is the most mature, grounded 23-year-old I’ve ever come across. He is not a “surfer dude” as you might stereotypically imagine. Rather, he is a disciplined and very fit athlete who trained with surf greats such as Laird Hamilton since he was a little kid. Both Kai and his father, Martin Lenny, are incredibly nice people and are truly grateful for all that life has given them. And they give back via Kai’s foundation: positivelykai.com. But make no mistake about it, Kai worked very hard to get where he is. That hard work got him in the Pe’ahi Challenge as one of just 24 contestants. He made it as far as the semi-finals this year. In the final, only 3 of the 6 surfers even caught waves. Even the best are at the mercy of what waves come along, and if they are in position to paddle like hell and catch a wave that will have them free falling down a wave face that is taller than a house. The power of the big waves at Pe’ahi/Jaws is something to behold. A friend of mine lives about a mile away and he can hear the thunderous roar from his house when Jaws is pumping. And he says he can also hear the grinding of boulders that are dragged out to sea when the waves pull back. Big wave surfers use “Big Guns” which are boards that are not just larger but have much stronger center stringers and use twice the thickness of fiberglass compared to a regular board. Even at that, Kai broke two boards within 10 minutes at Jaws during the contest. He said he is so happy to have TAG Heuer as a sponsor, as they tell him to just do his thing and they will keep providing him with the tools of his trade. With boards in the $1000 range, sponsorship is essential for top surfers to be remain competitive. I was one of the fortunate few to watch the WSL Pe’ahi Challenge live from the cliff overlooking Jaws as a guest of TAG Heuer. The day after the contest, Kai Lenny and a couple of local surfing instructors gave lessons to TAG Heuer’s guests – I passed due to knees ruined by hang gliding long ago. So instead, I took photos of my fellow travelers and swam in the warm waters of Lahaina Roads (the part of the Pacific between Maui, Lanai, and Molokai) with a TAG Heuer Aquaracer 300M on my wrist. Humpback whales were just starting to return to Lahaina Roads when we were there. It is a favored birthing area for Humpbacks who trek down from Alaskan feeding waters each winter.