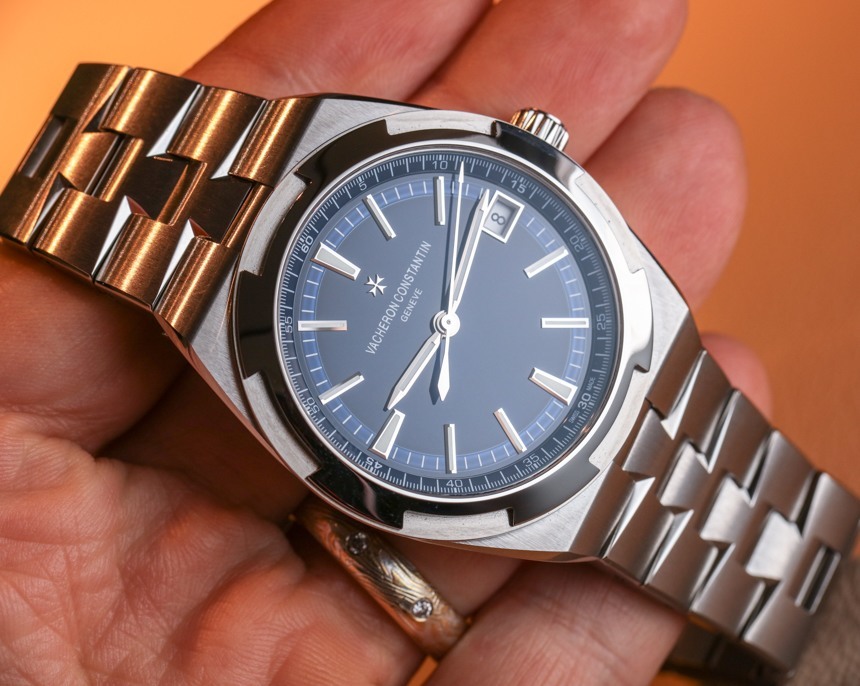 SIHH 2016 sees the welcome release of a totally fresh and updated Vacheron Constantin Overseas watch collection – something I have been awaiting with baited anticipation for quite some time. Originally devised by watch designer Jorg Hysek, the Overseas “luxury sport watch collection” was always Vacheron Constantin’s answer to the Audemars Piguet Royal Oak or the Patek Philippe Nautilus. Of course, one major difference was in that it was not designed by Gerald Genta – a detail that, according to Vacheron Constantin during our private conversations, is not often realized by people who cover the Overseas, mistakenly believing it to be a Genta design. Finally, in 2016 we welcome a truly modern movement in Vacheron Constantin’s flagship sport watch collection. Very attractive in its design and featuring a more modern diameter of 30.6mm wide (for the movement), the caliber 5100 is 4.7mm thick and produced from 172 parts (a suitably low number for what is supposed to be a pretty workhorse). This is also one of the few such modern sport watch movements to bear the Geneva Seal – which, for enthusiasts, is an extra added treat and sign of both aesthetic quality and mechanical performance. The calibre 5100 movement has a power reserve of 60 hours and finally offers 4Hz (28,800 bph) of operating frequency. This is up from the much less competitive 3Hz of the outgoing movement. The 4Hz operating frequency is part of the 5100 movement, as well as the 5200 chronograph, and smaller 5300. Affixed to the automatic movement is a “compass-inspired” (given the engraved design) 22k gold rotor, and you can view the movement through the sapphire crystal exhibition case back. Functionally, the 5100 offers the time with central seconds hand and the date. For the new Overseas models, Vacheron Constantin designed a pretty kick-ass dial that is actually an improvement over the previous Overseas dial which wasn’t too bad to begin with. The applied hour indicators are lume-painted and super crisp, offering truly excellent legibility. I really can’t see anyone not having a lot of fondness for these dials since Vacheron Constantin satisfied what they should be doing by having a legible dial that is both sporty and extremely classy. The new 2016 Vacheron Constantin Overseas watches are brilliantly conceived despite prices that don’t make the collection any more accessible that it was before – not that we were expecting as much. Case changes to the Overseas are remarkably subtle visually, even though the cases and bracelets are totally new. While the Overseas Chronograph comes in a 42.5mm-wide case, the Vacheron Constantin Overseas Simple Date comes in a 41mm-wide case that is 11mm thick. Given the wide stance of the case with the broad bezel and lugs, it wears extremely well, and I easily prefer it over the Nautilus (at least personally). The Royal Oak is a very different watch, but finally the Vacheron Constantin Overseas is a serious competitor that will no doubt present itself as a desirable option to those who traditionally would have considered the Royal Oak to exist in a class of its own. Like the older Vacheron Constantin Overseas model, the case is water resistant to 150 meters. An interesting feature is the inclusion of a soft-iron “Faraday cage” core which is meant to ward of magnetic fields making the watch “anti-magnetic.” That isn’t the interesting part though. What Vacheron Constantin was able to do is offer a high degree of anti-magnetic resistance but also offer an exhibition caseback. Not sure how this works out in real world performance, but it sounds like a nice solution for those who want an anti-magnetic watch but who of course also want to get a view of the movement. One of the most appreciated new features in the 2016 Vacheron Constantin Overseas case is the addition of a quick-release system for the bracelet or straps. A small pusher on the bottom of the watch at each end on the lug structure allows for a quick, tool-less release of the bracelet or strap. Even better is the fact that Vacheron Constantin includes with each Overseas the steel bracelet, alligator strap (with a great perforated nubuck lining), as well as a rubber strap. The 18k pink gold version of the Vacheron Constantin Overseas does not have a bracelet option (yet), but comes with an alligator strap as well as a rubber strap. It is so nice to see a brand like Vacheron Constantin not attempt to nickel-and-dime its customers when it comes to straps, but offering three options with the steel watches. Of course, there will likely be additional strap colors and options available in the future that will need to be purchased – and the straps’ attachments are totally proprietary – but with each purchase, you get a solid set of strap options and that is good news, as far as I am concerned.

Also worth mentioning is that in addition to the quick release system for the straps, there is a new tool-less way to change the deployant buckle between straps. It takes some study of the instructions to train yourself on the process, but I like that this level of detail was engineering into the wearing experience of the new Vacheron Constantin Overseas.