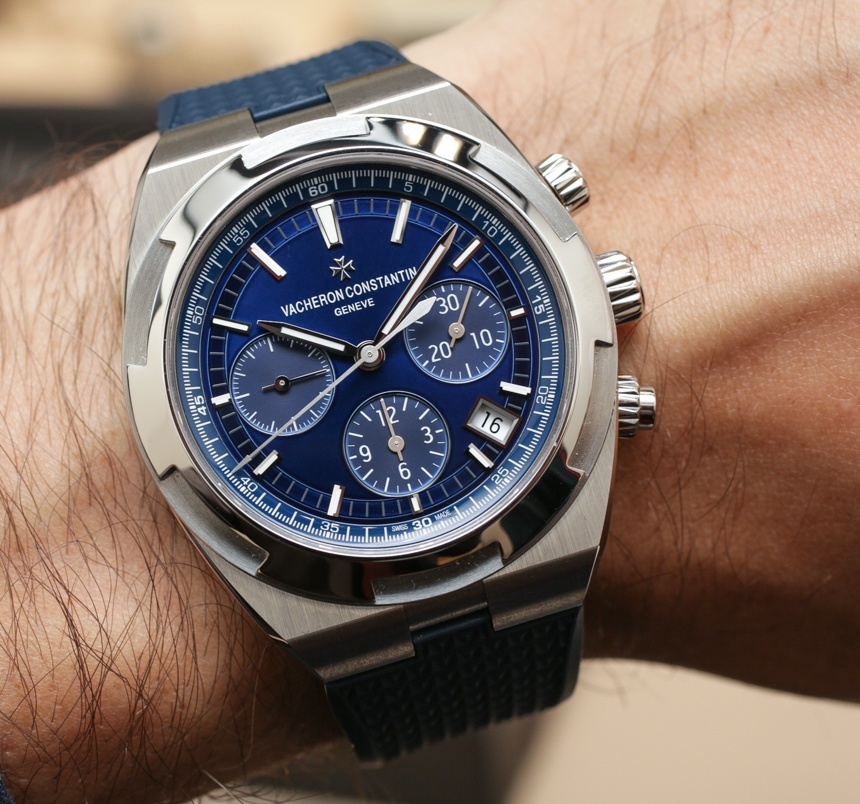 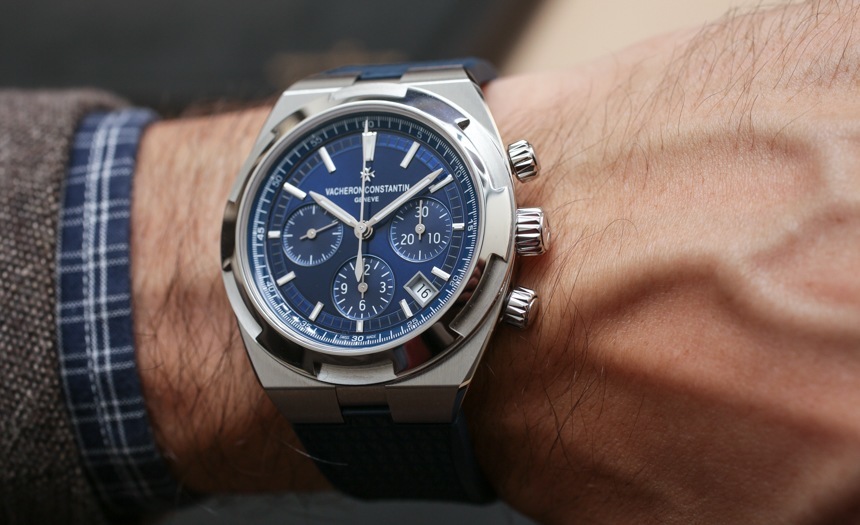 The Overseas line was originally launched in 1996, marked by a formidable use of technology wrapped in a traditional but focused aesthetic accented by the now instantly recognizable fixed bezel design. The Overseas is meant to be a traveler’s watch, a watch for an adventurous globetrotting gentleman. Whenever I see a Vacheron Constantin Overseas Chronograph, I think it should be worn by the type of guy who has completed open ocean solo sailing trips. It’s luxurious, yet tough enough to endure daily wear in lifestyles that don’t often feature “spa days.” 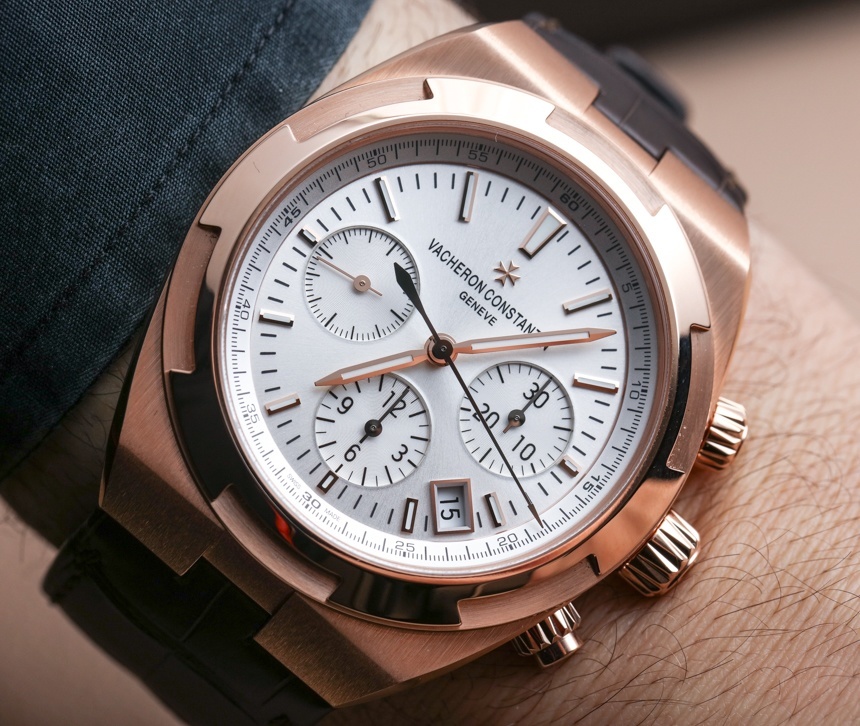 Available in steel and pink gold, the Vacheron Constantin Overseas Chronograph is 42.5mm wide and 13.7mm thick. The steel model can be had with either a silver dial or the brilliant blue dial seen here, while the gold comes only with a silver dial. All of the watches in the new 2016 Overseas line, including the Vacheron Constantin Overseas Chronograph, are Hallmark of Geneva (Geneva Seal, Poinçon de Genève) certified timepieces.

The dial layout is simple, legible, and detailed, with running seconds at nine, a 30-minute counter at three, and a 12-hour counter at six. Replacing the big date featured in the previous generation (as you can see hands-on here), the calibre 5200 Vacheron Constantin Overseas Chronograph has a standard date display at 4:30 which uses a bright and legible white date wheel with black text. While the overall look is very similar to the previous generation, there are no active plans to retire the current model or replace it with this new version. 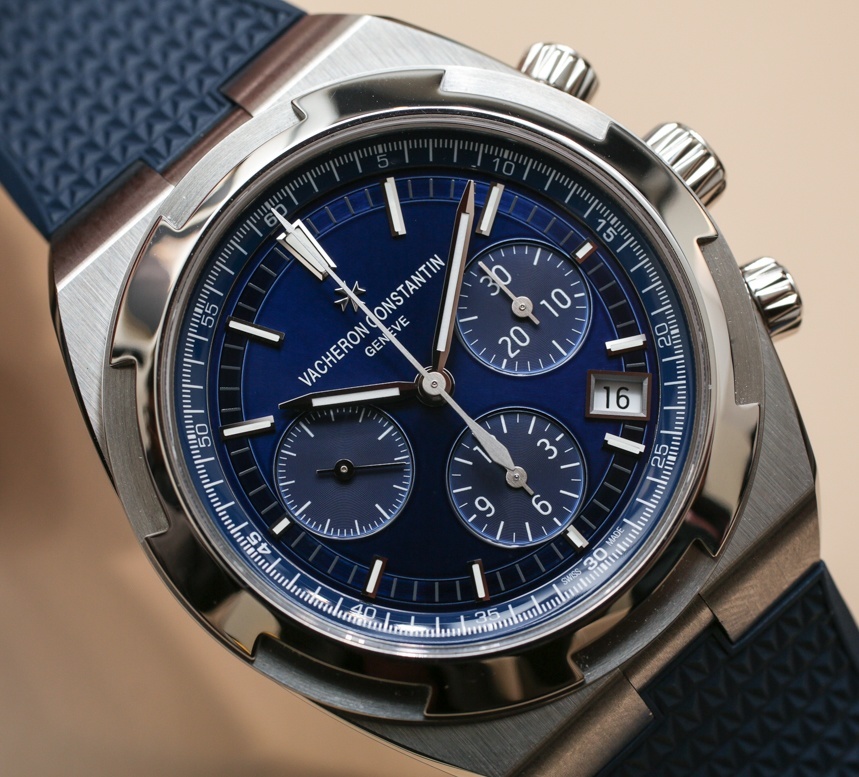 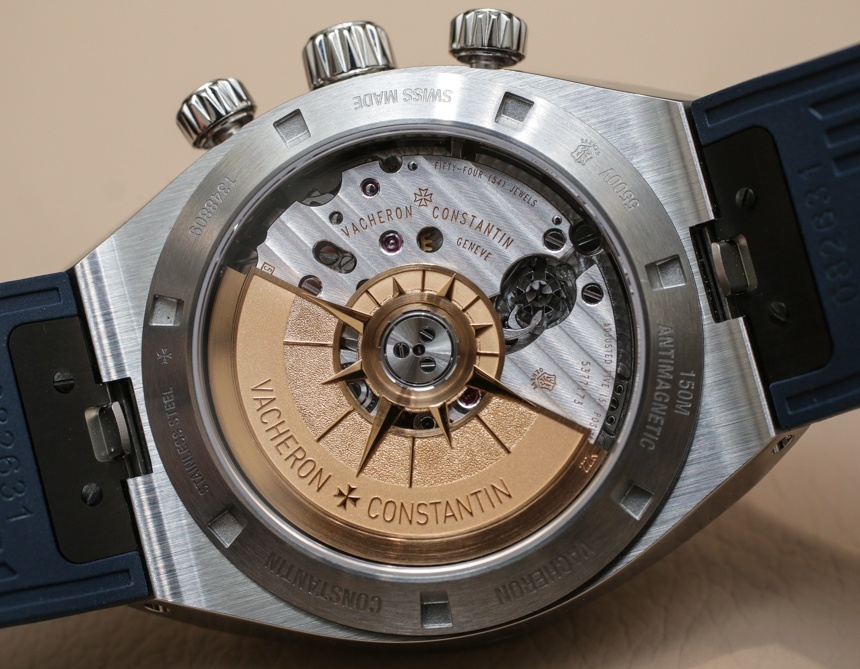 This new Vacheron Constantin Overseas Chronograph generation is a bit more simple, clean, and minimal compared to its older sibling. The lines are the same, but VC has completed the illustration with fewer brushstrokes. I really like the new dial with its simplified layout, thinner markers and railway minute track. The proportions are great and the watch feels special without seeming precious, especially if you opt for the steel option.

Also enchanting is the lacquer blue dial that is navy in low light and a brilliant rich inky blue in bright environments. The marker and hands are lumed and, especially on the included rubber strap, the Vacheron Constantin Overseas Chronograph feels decidedly sporty. 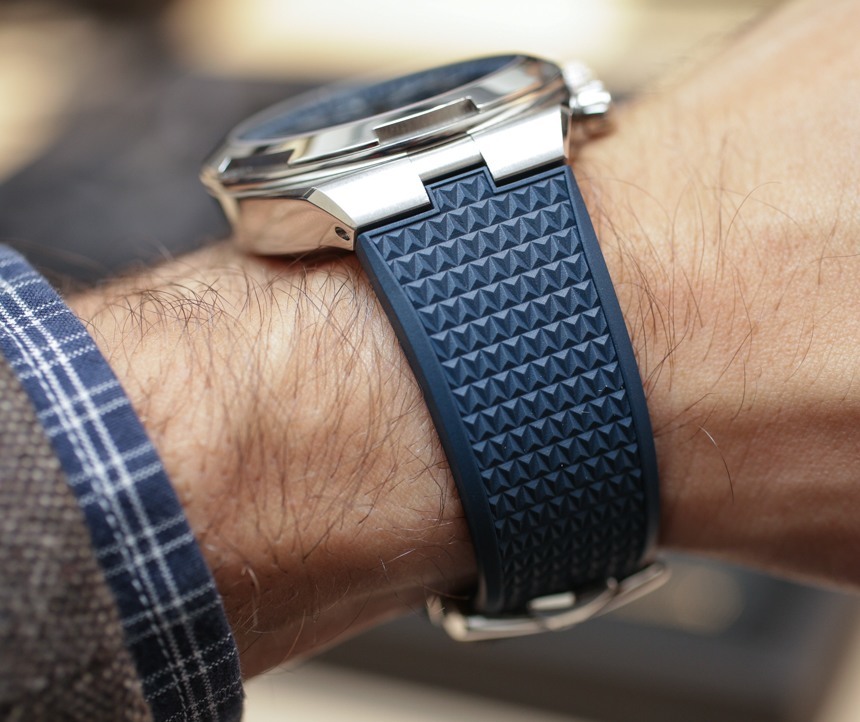 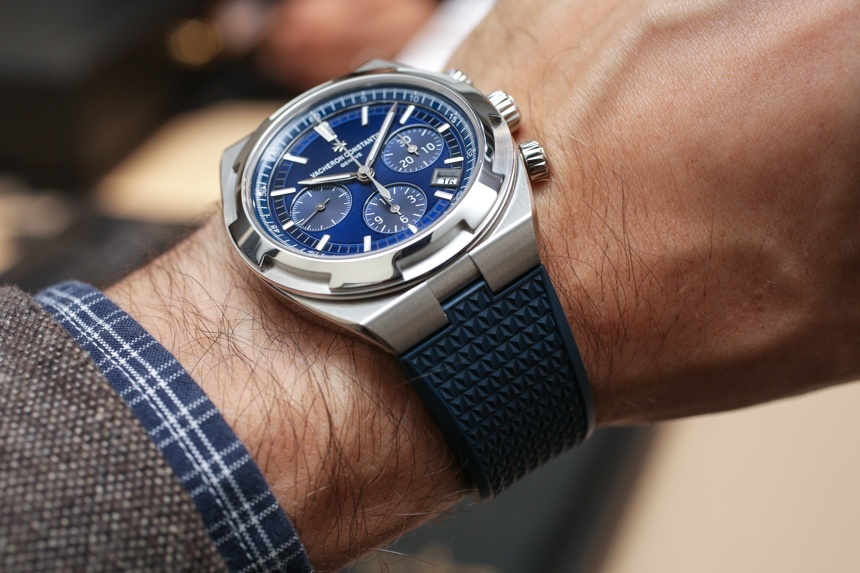 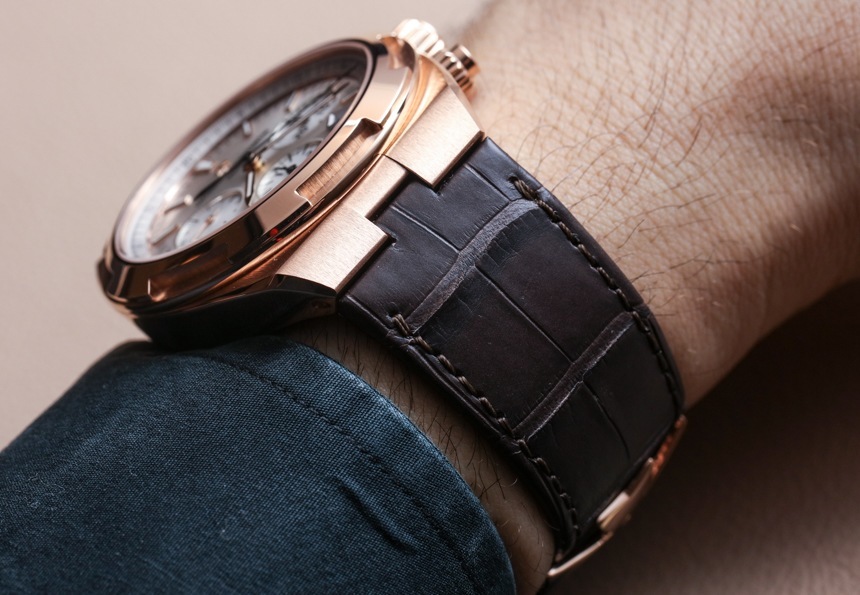 Aside from the slight face lift, the big story here is with the new movement, Vacheron’s calibre 5200. The 5200 is a an automatic column wheel chronograph movement running at 4Hz and offering some 52 hours of power reserve. Visible through the sapphire display case back, the 5200 is fitted with Vacheron Constantin’s usual 22k gold oscillating weight. Water resistance is 150 meters and the chronograph pushers use a quarter-turn screw-down locking system that is easy to operate and supports the Overseas’ sporty and water-ready demeanor. 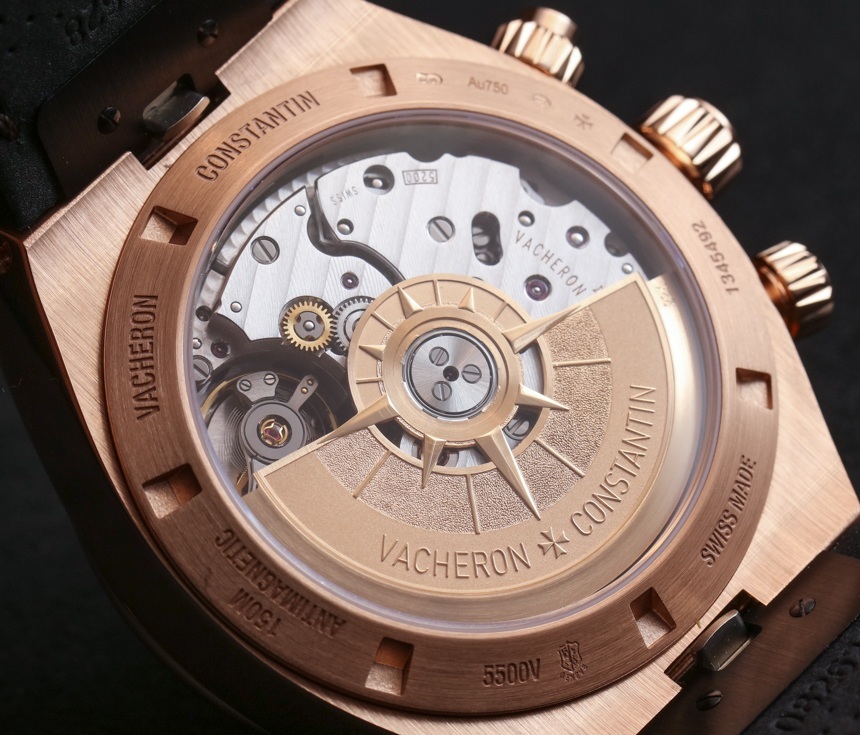 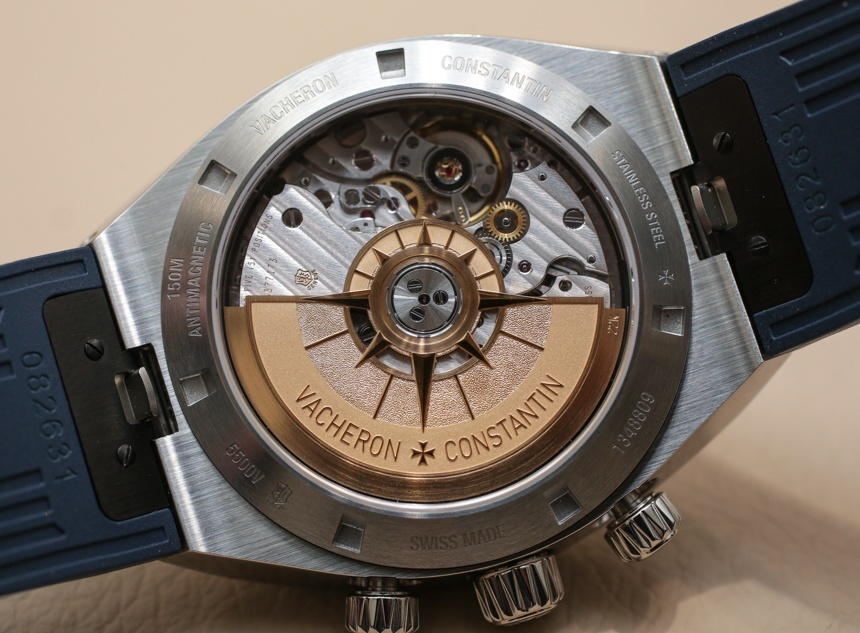 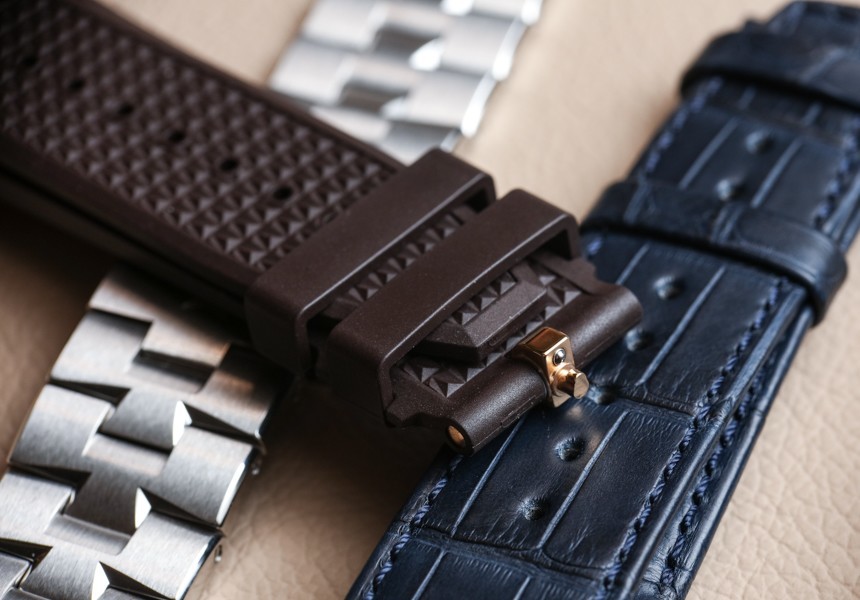 On any of the included straps, you’ll find a small metal tab on the underside by the case edge (see above photo). Press that tab and the strap can be pulled free of the case, and in about 10 seconds, you can mount a new strap for an entirely different look and feel. No tools, no scratches.

The steel Vacheron Constantin Overseas Chronograph comes with the steel bracelet as well as a rubber and a leather strap, while the gold model comes with a rubber and a leather option. For the non-bracelet choices, the folding buckle can also be removed using a simple keyhole tension lock built into each clasp. Just turn the strap edge against the tension for 360 degrees, and the buckle comes off. The steel bracelet also features an adjustable extension that can add between 2mm and 4mm by gently pulling on the links next to the clasp. 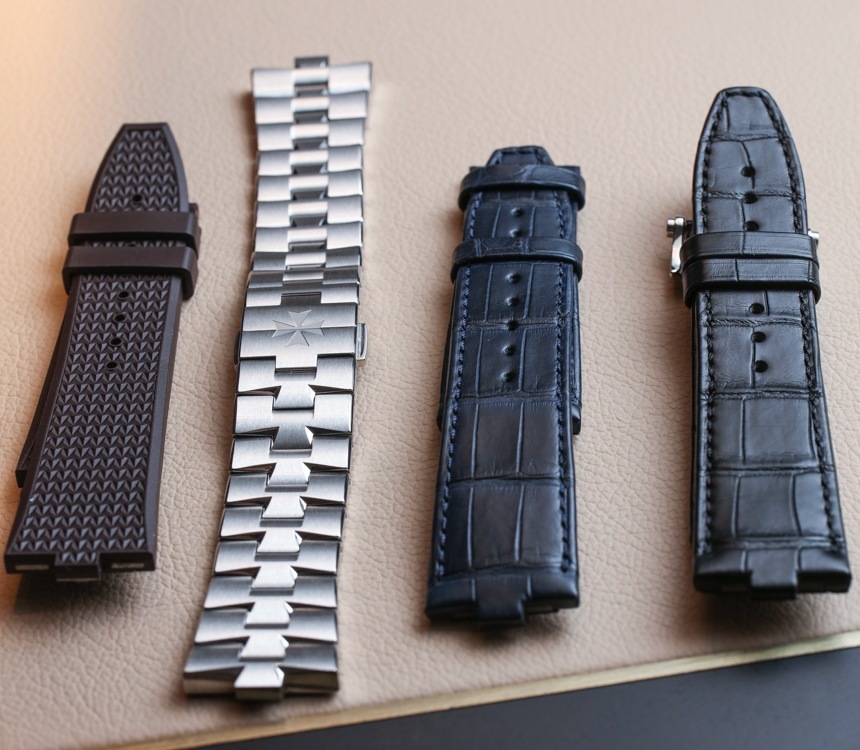 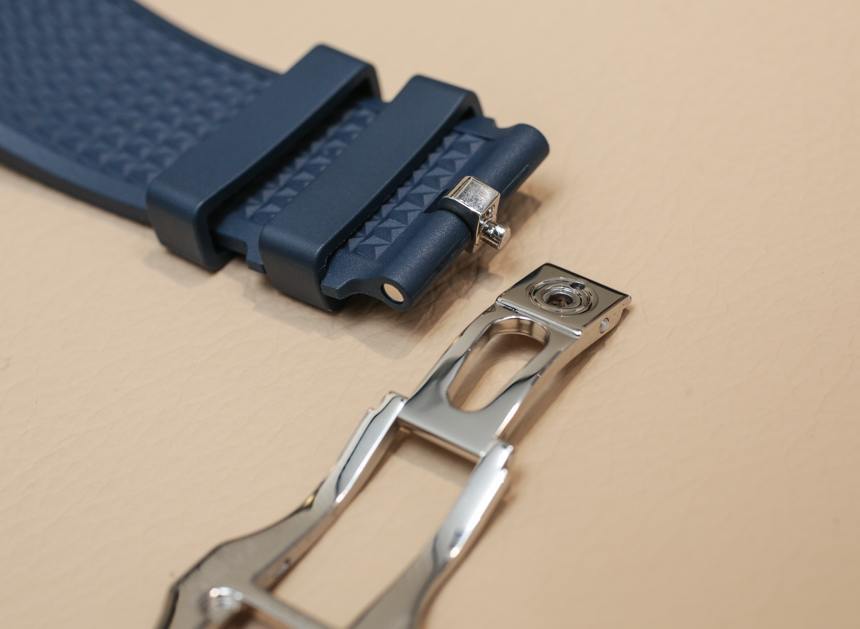 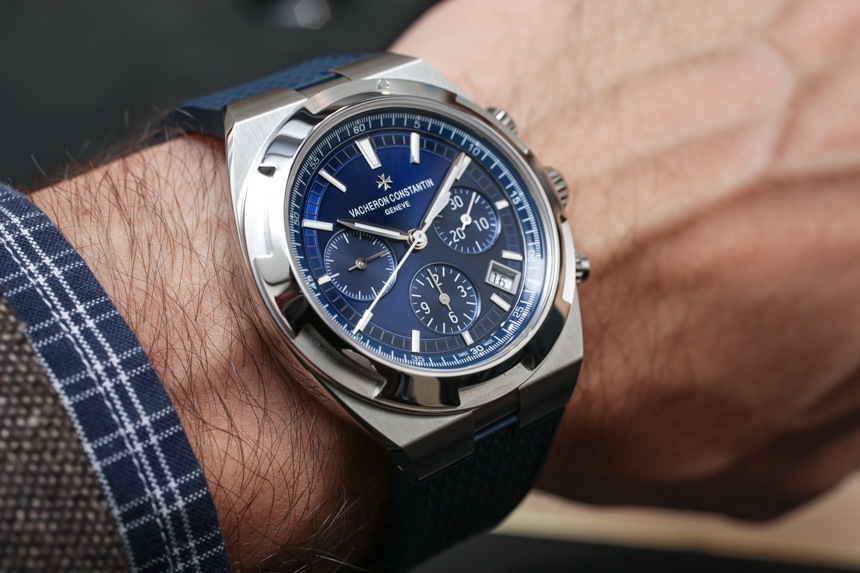 Given that the Overseas is such an important line for Vacheron Constantin, it’s encouraging to see that they’ve approached these new models in a holistic manner. Between the new automatic chronograph movement, the tweaked dial design, and the trick tool-less strap system (not to mention the inclusion of additional straps), the 2016 Vacheron Constantin Overseas Chronograph looks to continue where its older siblings left off, carefully managing the duties of both a dressy watch and a capable sport watch. Pricing starts at $28,900 USD for the steel versions and $49,000 USD if you go for the gold. vacheron-constantin.com