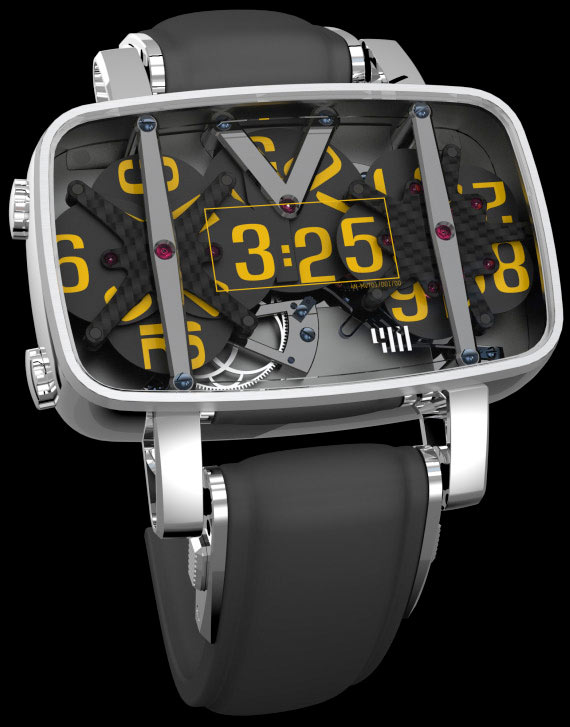 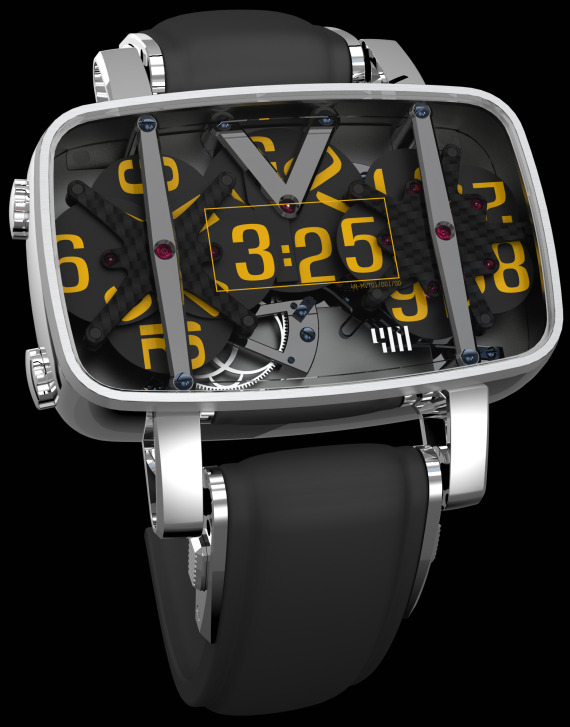 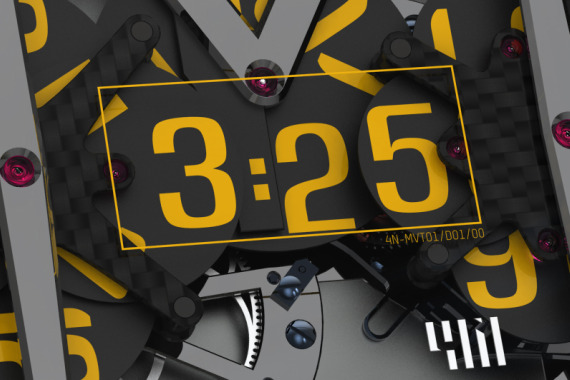 Poor us who would love to wear this watch but cannot afford it (now or ever). A truly cool design that I think will appeal to a legion of watch lovers and traditionally non-watch lovers, alike. The time is told in a simple digital manner on four discs. Because there are four numerals (assume it said like 11:25 for the full four numbers). And this is why the brand is called 4N. I think it is sort of funny how brands come about with a plan of just selling one watch. Basically, all future 4N watches can only have 4 numerals right? You see this type of one watch brand pretty often in the watch world. Once in a while, the brand does well enough to make more models.

The model name of the watch is something a bit weird like 4N-MVT01/D01/42 – at least I think. I am just going to call it the 4N, just like I call the Cabestan Vertical Tourbillon Winch watch, the Cabestan watch. Inside the 4N watch is the MVT01 movement. Which is not a particularly clever way of indicating that it is their first movement. It is supposed to be in-house made to boot. The movement is manually wound and the hours and minutes are supposed to be jumping hours and minutes. I am actually surprised by this because the only such watch that I know to do this is the A. Lange & Sohne Lange Zeitwerk watch – which was really hard to make and took a really long time to properly engineer. It seems a bit hard to believe that 4N would get it right so quickly when Lange clearly isn’t giving away and secrets.

To accomplish the jumping hours and minutes, the watch would need a sophisticated constant force escapement – which apparently it has. This allows for a steady surge of power from the movement to move the discs without effecting the rate of the movement. The term literally means “constant force” (uninterrupted) from the mainspring to the movement. More than likely 4N is still working out the kinks in the watch as I don’t think it is commercially available yet. The digital numerals are supposed to be very large. Something like 5.5mm wide each. Though I have a feeling that this has been scaled down a bit. A neat looking frame (applied to the back of the sapphire crystal) tells you exactly where to read the time. Functionally, the watch is supposed to be quite easy to use. There is a crown on the right side of the case and two pushers on the left side of the case. Those pushers are used to adjust the minutes or hours (each one advances either the minutes or hours by one increment with each push).

In almost a widescreen TV style case, the 4N watch will be available in 18k white gold, platinum, and likely two other materials. The movement is made up mostly of titanium, aluminum alloys, and carbon fiber. There is really no denying how cool it looks. The relatively simple shape of the case is augmented by the complex lug structures. A genius design move making the watch really feel special. It almost goes without saying that the watch is quite special.

Francois Quentin is the man behind the design and the brand. He is also well known for being one of the main guys behind Hautlence, as well as the designer of one of my favorite high-end fashion watches. That being the Louis Vuitton Tambour (especially the Diver). The 4N watch be available (at some point) in a limited edition of just 16 pieces of each model (not sure how many models). How much will this cool mechanical digital watch cost? Hard to predict. Though I would be surprised if it was a penny under $80,000, and could easily be several times that. I am waiting for a working version to get my hands on.