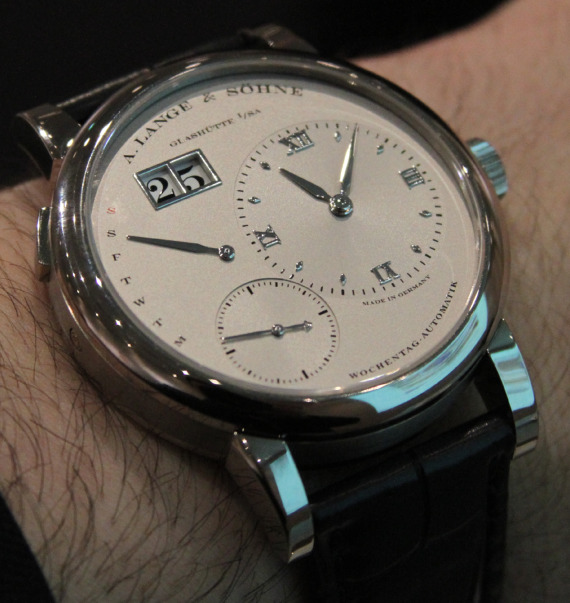 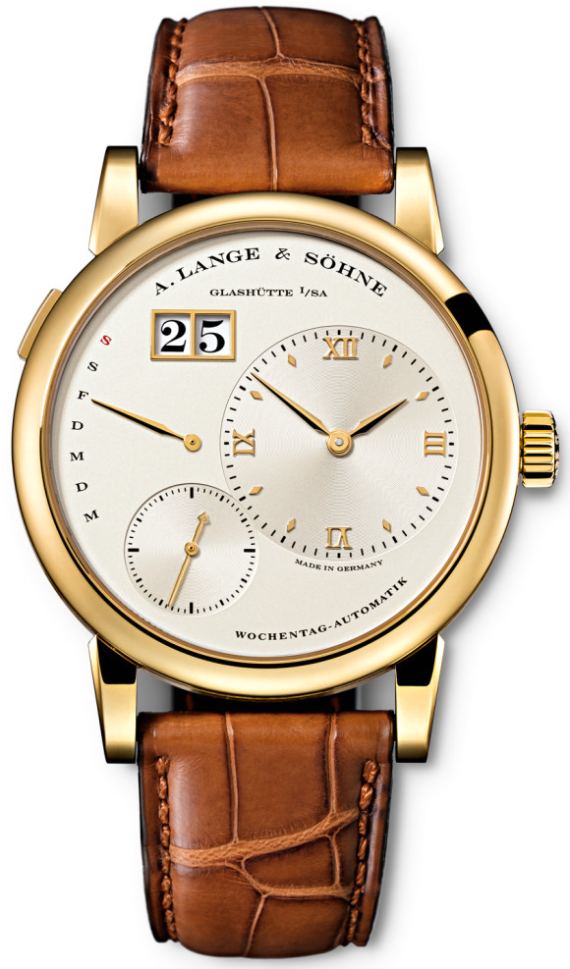 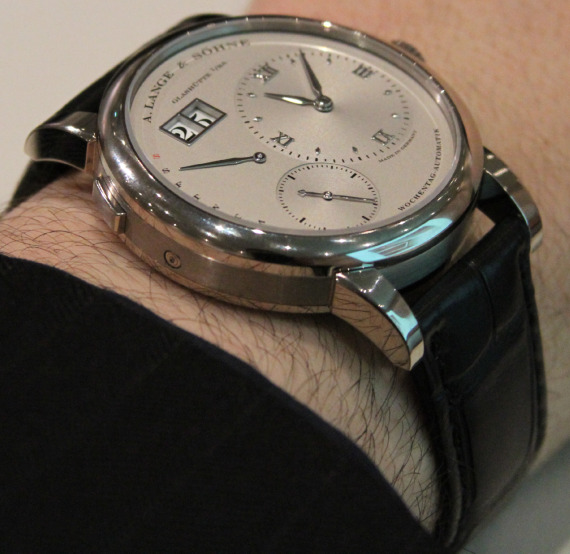 Although I’ve written about the new A. Lange & Sohne Lange 1 Daymatic watch elsewhere, I needed to mention it to my primary audience here on aBlogtoRead.com, especially after getting my hands on them. Lange has officially released a new “grail watch.” Extending the attractiveness of the Lange 1 line even more by essentially adding a new automatic movement and twisting up the design a bit. Plus, the watch has grown by just a hair from the Lange 1. When A. Lange & Sohne was a reborn luxury brand in the 1990s, the avant garde Lange 1 watch to be their flagship model – with a look and poise un-paralleled elsewhere. Now, 15 years after the Lange 1 debuted its asymmetric face, we are presented with a new vision of the model.

It is important to realize that there have been a number of Lange 1 watch iterations over the years. From the large sized XL model with its overlapping dials, to the world timer or moonphase models – the watch collection certainly has its share of versions. However, instead of just adding functionality here, the Lange 1 Daymatic is a real reinterpretation of the watch line – as seen in the eyes of an automatic. While it may seen unexciting to you that the major change is just the addition of an automatic movement – realize that A. Lange & Sohne makes very few automatic movements. Normally none of their flagship models have these convenient mechanical movements included. The movement has all the standard beautiful decoration with a gold rotor that has platinum around the edge for additional weight. 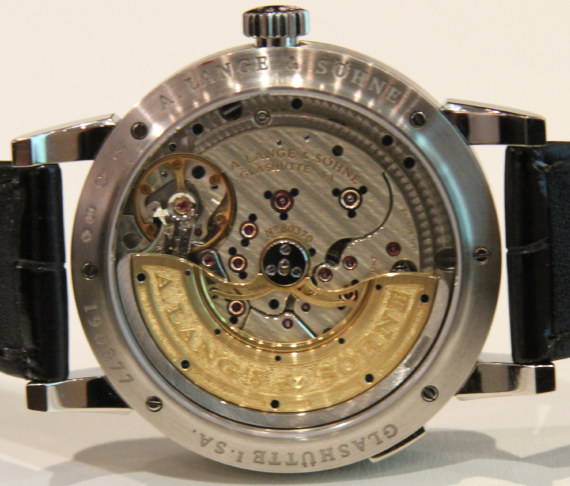 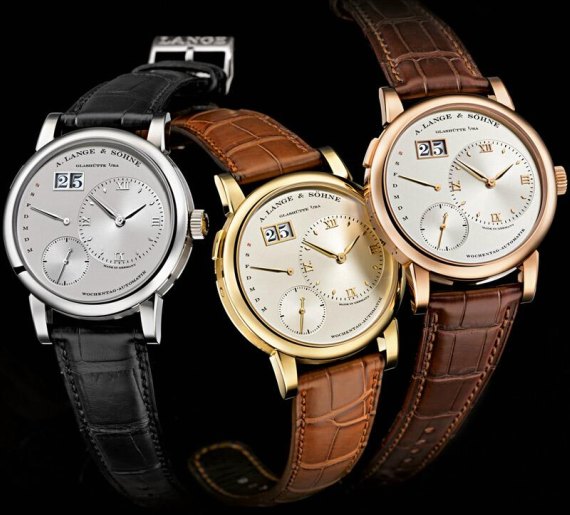 Manually wound movements are often preferred in high luxury watches – especially those of distinct Germanic flavor. Why? Because the movements feel more traditional when they are manually wound, but more importantly, you can have an unobstructed view of the movement. A. Lange & Sohne makes all of their own movements. This includes the design, to the manufacture of tiny parts, to the decoration, to the intense assembly and testing. Because each watch spends so many hundreds of hours being detailed and finished, the brand needs you to see what it is that you are paying for. It begins to make a lot more sense why a watch cost’s $50,000 or more dollars when you know that it took 6-12 months to complete it by hand. Then when you see the movement and its beautiful, meticulous finishing and decor, you “get it.” An automatic movement has so much of the movement covered with the oscillating rotor, that this becomes a bit of an issue. At least this is the idea. You can easily disagree with it.

Regardless, A. Lange & Sohne has finally caved in, and designed a new automatic movement for its esteemed Lange 1 line of watch. The movement movement is the Calibre L021.1, with 426 parts, and a 50 hour power reserve. The new movement replaces the iconic power reserve indicator with a retrograde date of the week indicator. As the movement winds automatically, there is less of a need for a power reserve indicator. Plus, the orientation of the dials as been inverted. If you look at the dial of the new Lange 1 Daymatic compared to the original Lange 1, you will see what I mean. The dials look like a mirror image of one another. Now the time is seen on the right instead of the left. The subsidiary seconds dial as well as the “out-size” date indicator window have been retain as necessary components of the watch’s character. 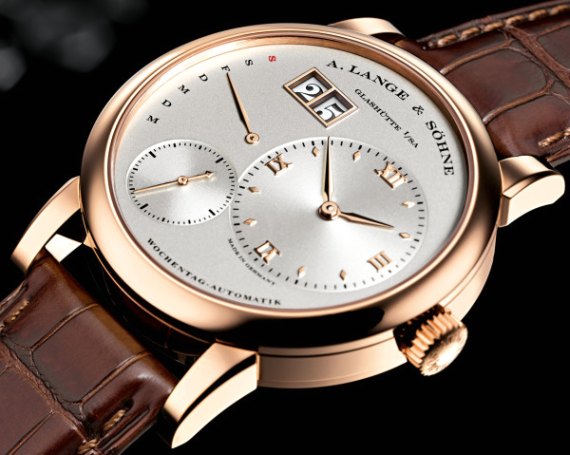 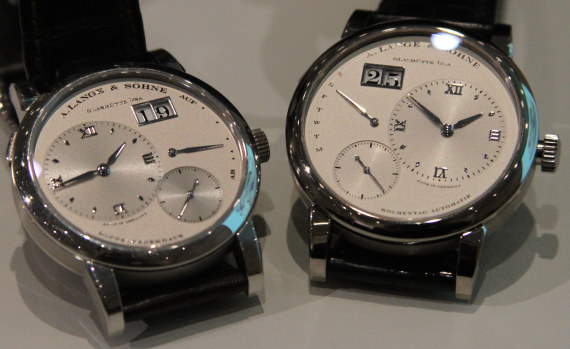 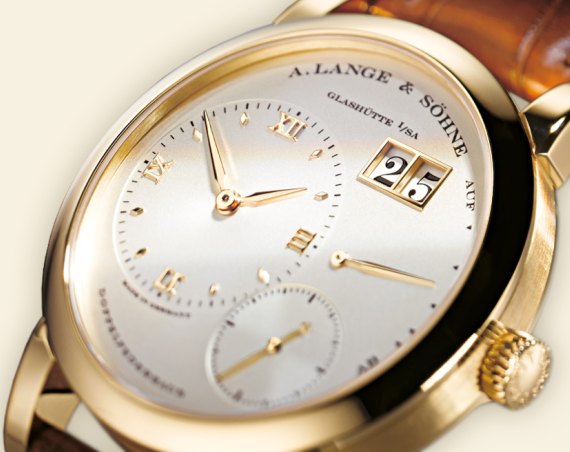 Like most A. Lange & Sohne watches, the Lange 1 Daymatic (Day + Automatic = equals cool retro sounding) will be initially available 18k yellow gold, pink gold, or platinum. Very ritzy, but you are talking about a brand that “does not make watches in steel.” I anticipate that future models will spice things up a bit in terms of materials and dial colors. For now, the 39.5mm case is paired with one of Lange’s very beautiful solid silver dials with matching applied gold hands and markers. You can see more details below in the data sheet supplied by Lange themselves.

A new chapter has been made for the Lange 1 watch setting forth its character as a dream watch for the next 15 years. The once odd design is a true modern classic. Not convinced? Put one on your wrist and see what I mean. It will convince you that quickly of its merit. The new line will be officially unveiled at SIHH 2010 in January. I will be there and have lots of time to model these watches – whereby I will show them off  to you at some later time. Prices? Not sure yet, but they will be in the plus $50,000 range. 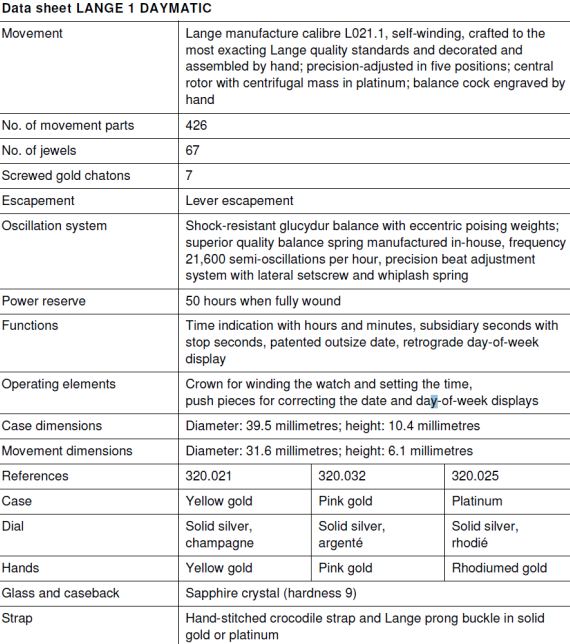