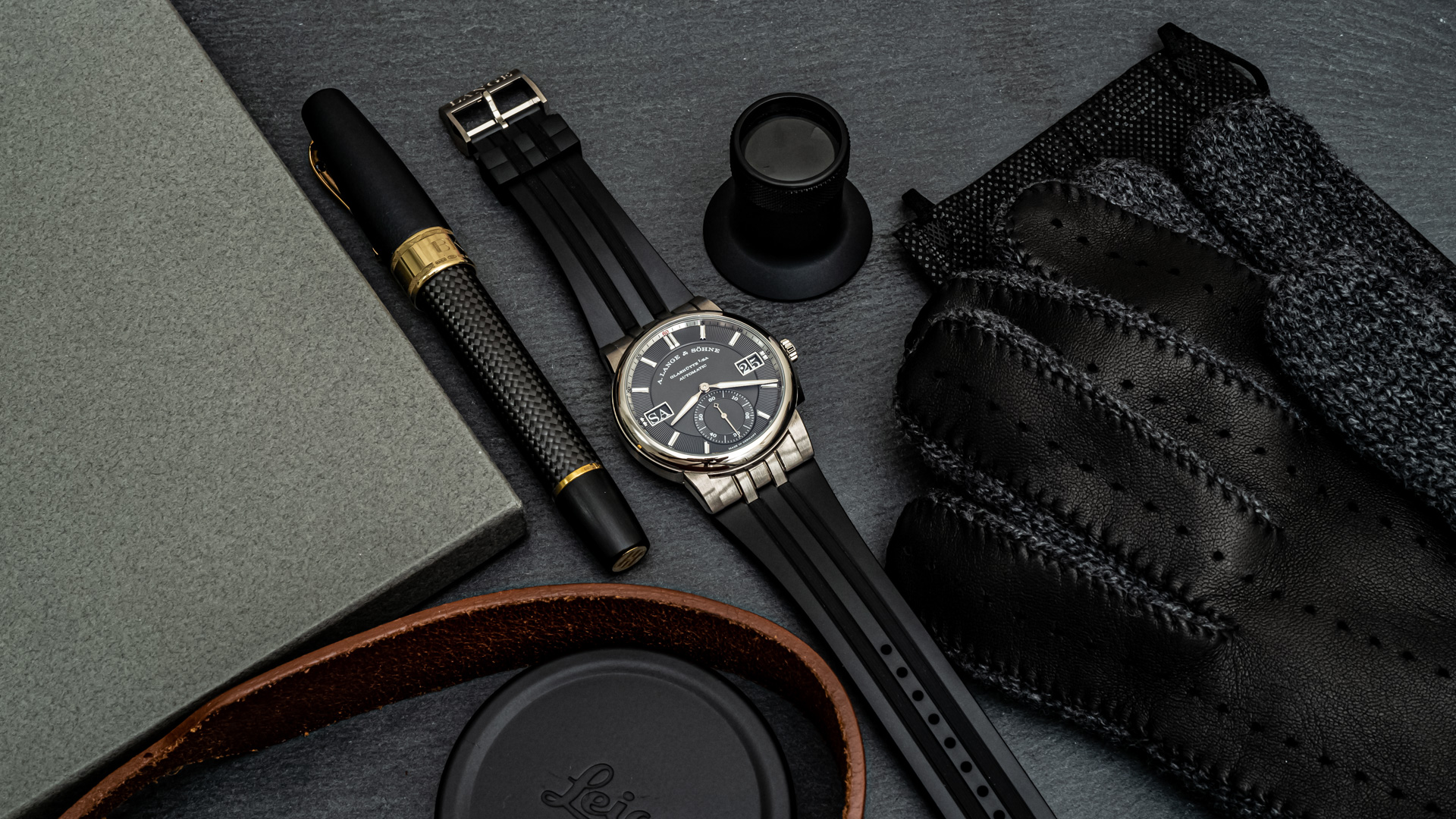 aBlogtoWatch Editors’ Picks: Top Watches From 2020 If Money Were No Object 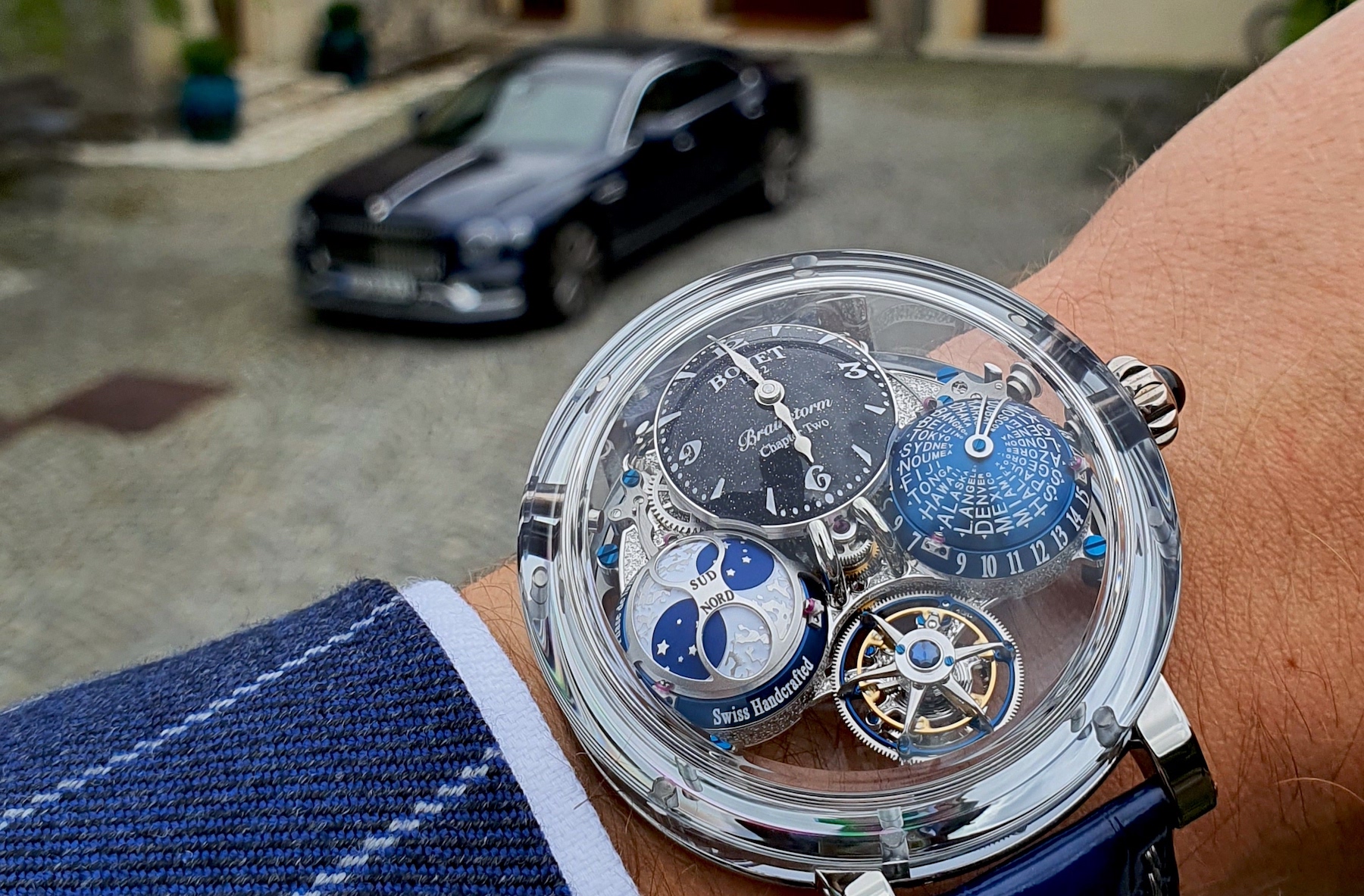 Money no object, huh? An interesting thing about this segment to note is how far we saw the luxury watch industry drift from halo products in favor of ultra-high-end versions of series-produced watches. Halo watches were those highly limited, often unique, products that featured concept-grade materials and engineering solutions with the primary function of elevating the status of their creator brand. Cartier used to be a leader in incredibly amazing and, in truth, sometimes rather pointless exercises in fine watchmaking, but the mid-2000s to mid-2010s saw them coming thick and threefold.

Very expensively developed unique pieces that were fascinating to look at but nobody could buy have largely become a thing of the past as brands have re-focused their efforts to develop and manufacture more feasible marketable creations — which, mind you, still cost an arm and a leg. With that in mind, here’s the ABTW team’s selection of top watches from 2020 if money were no object. – DAVID BREDAN. 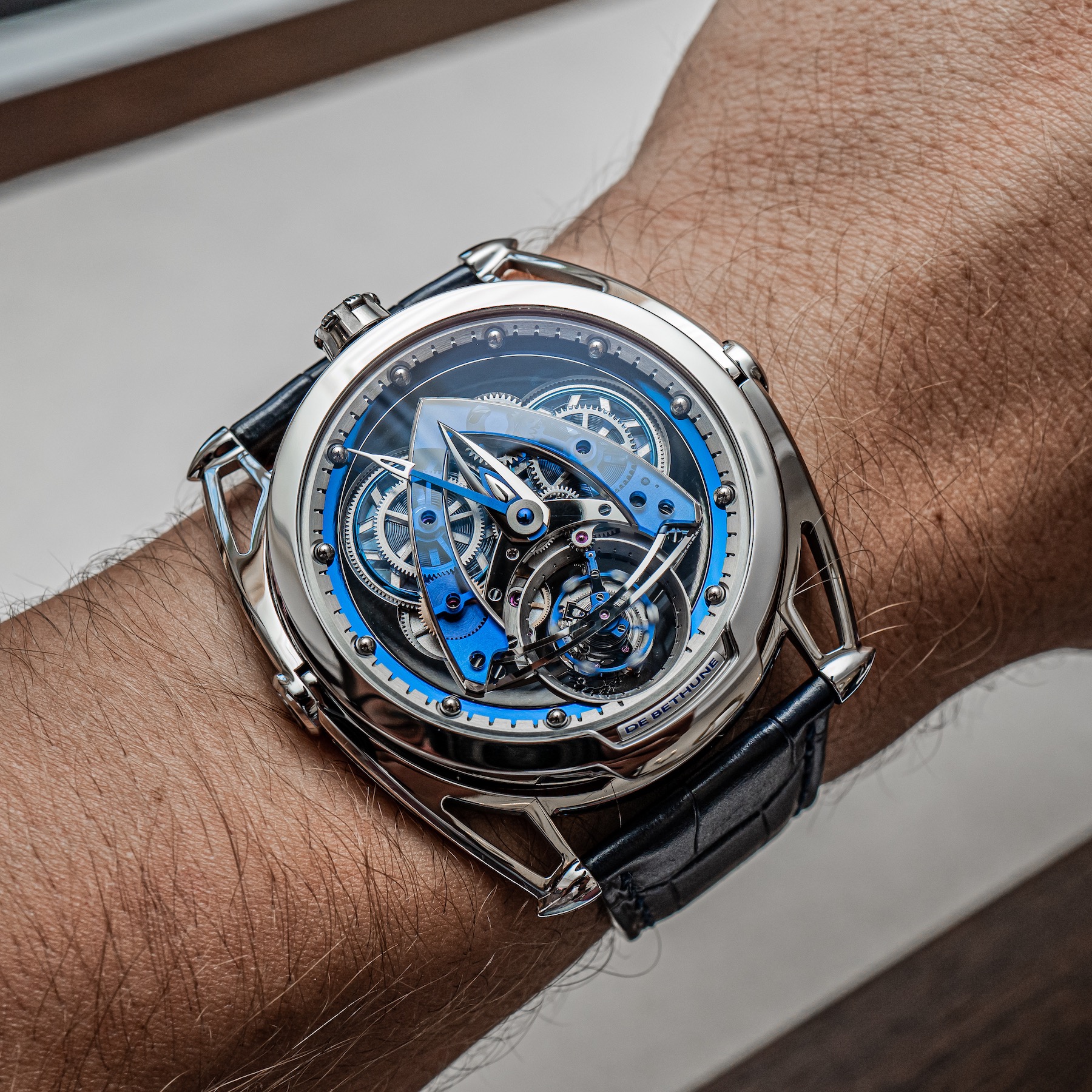 2020 was probably a weird time to release ultra-luxury timepieces for the world’s most elite to enjoy; conspicuous consumption is temporarily out of taste. Nevertheless, those with oversize budgets have brand-new options to lust after. Hublot continues the trend for sparkling rainbow watches, while A. Lange & Söhne shows how polished metal can be as lovely as precious stones. Richard Mille tantalizes with color and rarity at the highest-end of the spectrum — and continues to succeed this year. Geneva Independents such as De Bethune and Urwerk, while exotic, feel stable in a time of such tumult. 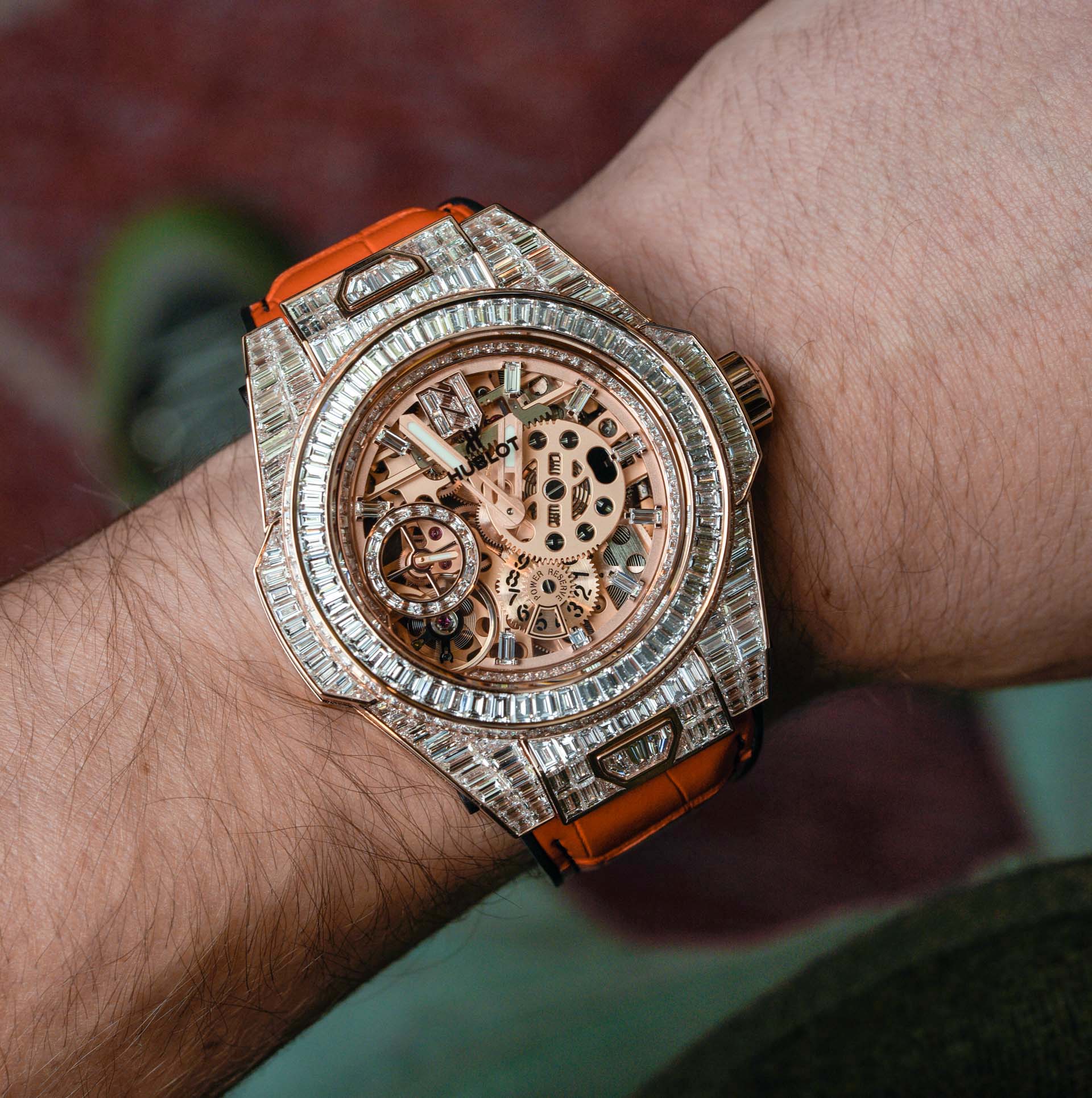 If money were no object, right now I’d get a watch that fills me with a sense of wonder – the sort of wonder that, in my head, sounds something like: “How many odd decisions did it take to go from a blank piece of paper to this?” So, what I’d do is consign Hublot to make my version of its certifiably insane €364,000 MECA-10 “Nicky Jam” pièce unique. That’s what I’d do. Why? Because I don’t give a hoot about Nicky Jam and because I would, admittedly, take a smaller case to reduce the so-called compensation effect. However, I would absolutely insist on Hublot’s gem-setters (whose work I praised through my words and photography in the hands-on article) cramming the exact same number of diamonds into that smaller diameter, somehow. I also love and appreciate the MECA-10 caliber, and it’s good that the mechanical-watch lover in me would have nothing to be ashamed about. 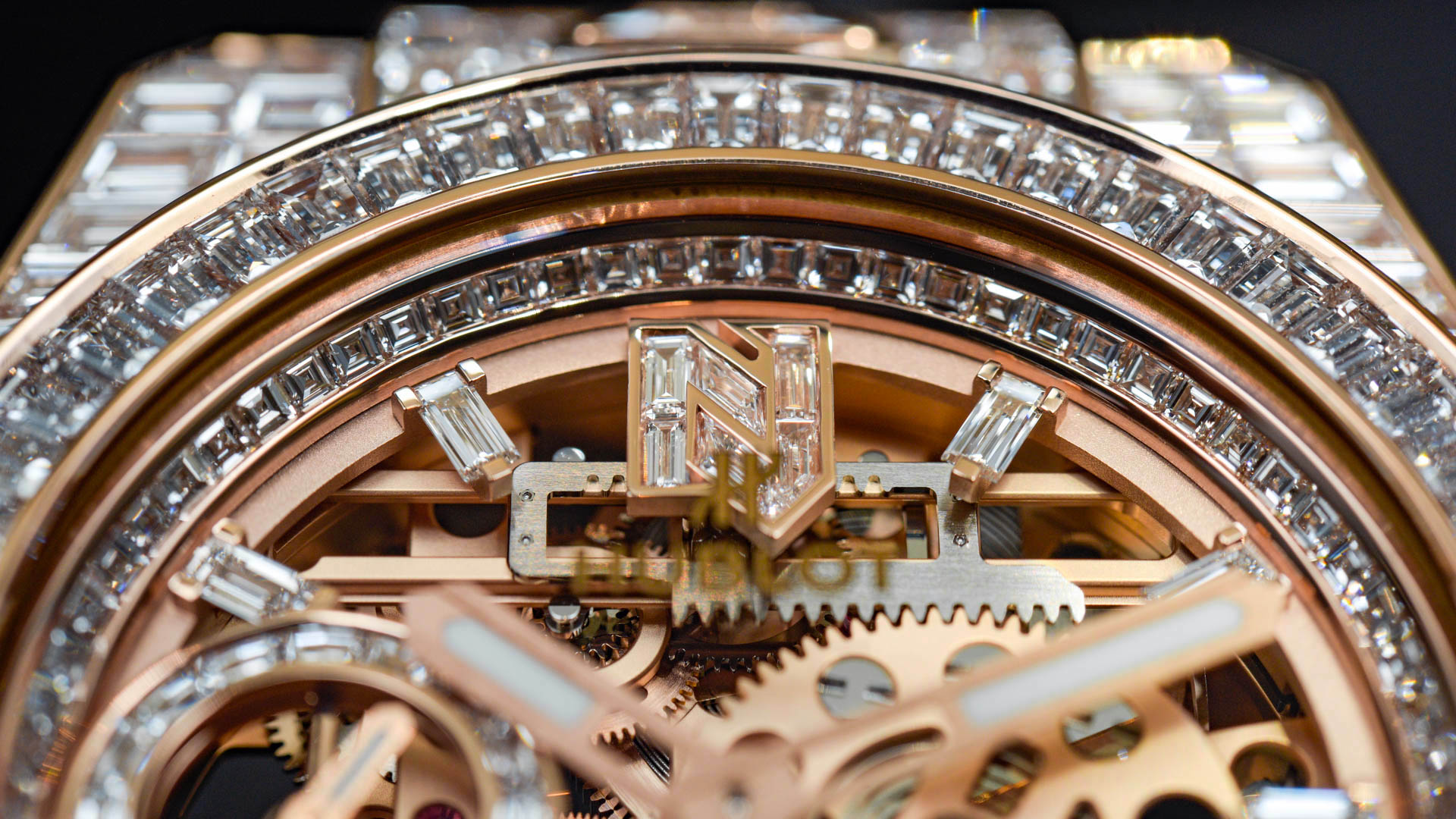 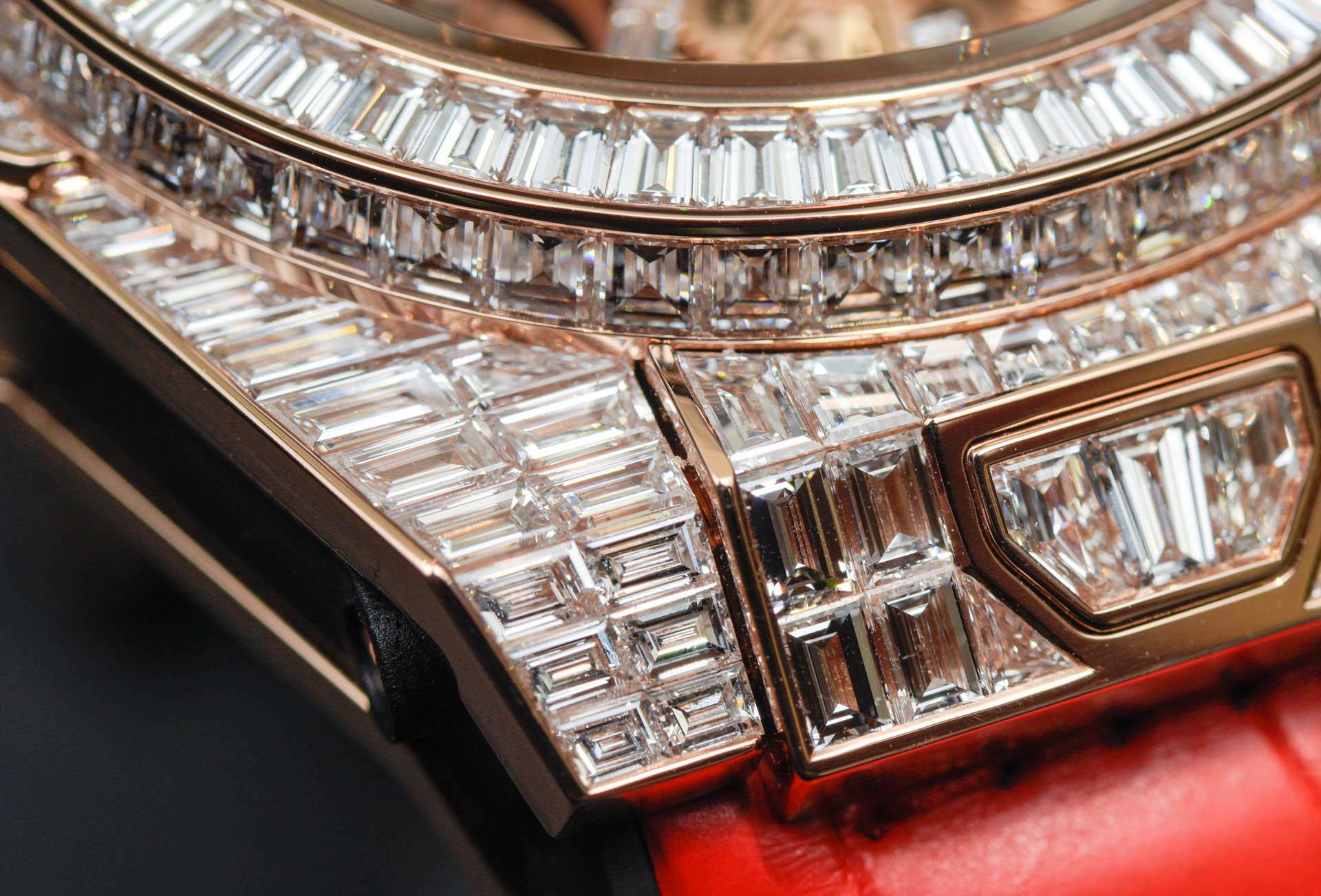 I’d also get my own weirdo strap to match, probably with purple transitioning into royal blue. You know, to keep things classy. Frankly, getting this watch would also be done in protest. Because getting a three-hundred-thousand-dollar tourbillon from any of the pinky-lifting names of old watchmaking is, in my eyes, in no way, shape, or form less showy than this one. It’s the same message, the same eye-roll-inducing one-uppery. It’s just effective with a different circle of wealthy folk. Because watches with the “TOURBILLON” text in a subdial end up in exactly the right places to rub wealth into each other’s faces and so that “discreet” text is just as effective at showing off and rubbing it in as the diamonds are on this Hublot. One is for new-money YOLO idiots (like I would be) and the other is for try-hard snobs. But, to me, not one is better than the other. 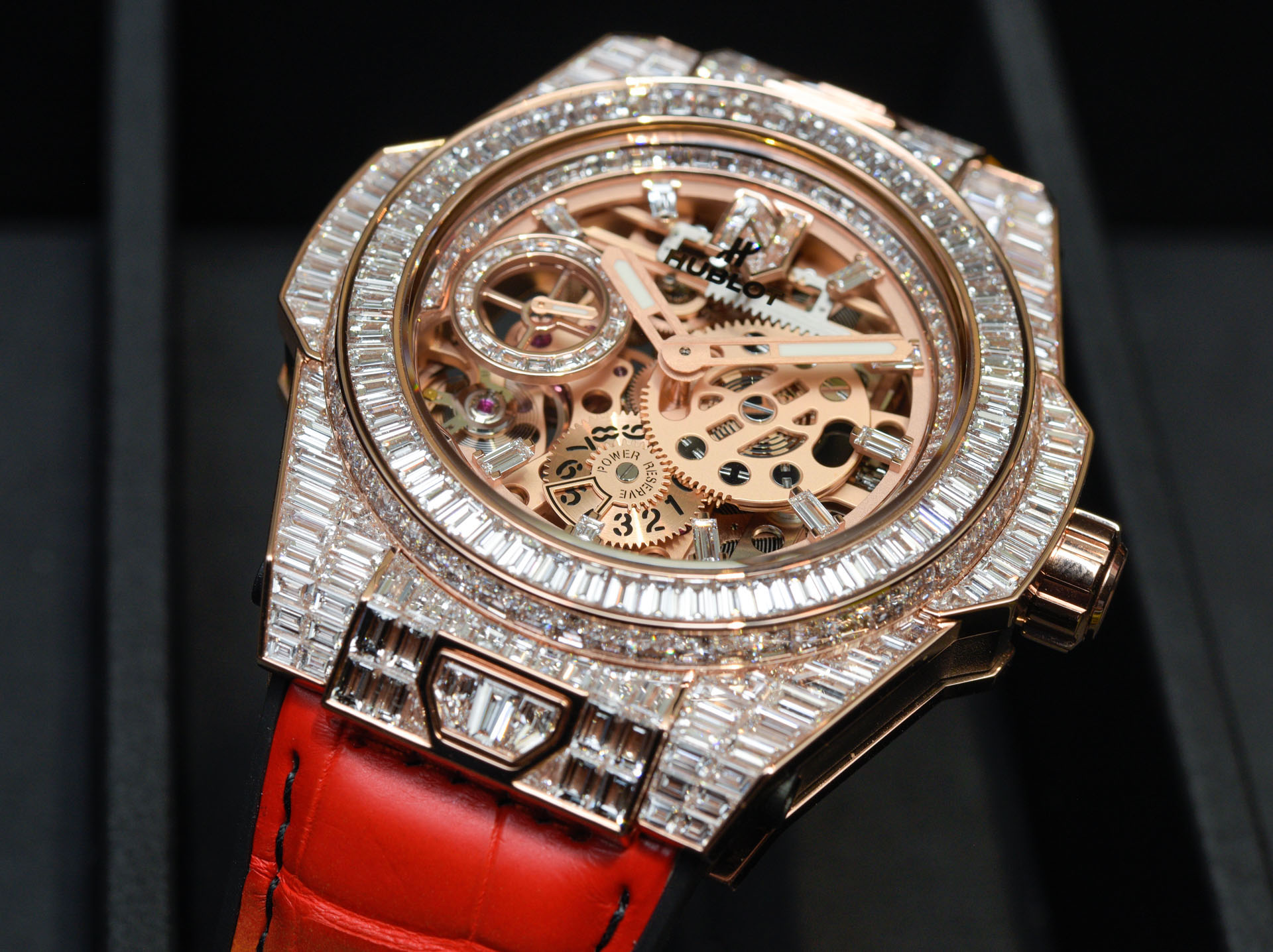 So, if you came to me with your PP tourbillon when I’m wearing this, I’d be damn sure which one of us smiled more that day when looking at our respective watches. Maybe it’s less likely you’ll get stabbed for the discreet tourbillon, but hey, I’ll still take the diamonds all day. But only if they are set with such world-class expertise as Hublot’s craftspeople do it. Oh, and I’d definitely get the light-bar-style baguette hour markers floating over the movement, too.

If I had to describe the A. Lange & Söhne Odysseus in two words, that would be it.

I got to spend a week with the Odysseus in white gold on leather strap, the follow-up to last year’s stainless steel inaugural variant. Like so many greats, it’s a watch that commands strong and polarized opinions from the enthusiast community.

With a new rubber strap that is as supple and comfortable as any I’ve ever worn, the white gold Odysseus is a bit more casual than its steel predecessor. The layout of the dial is identical, but there are significant changes that range from color to finishings. One thing that is very clear with this second Odysseus is that it’s a bit more restrained than the first. Swapping out the blue dial for gray and the bracelet for one of the two straps goes pretty far in tamping down some of the more flamboyant aspects of the Odysseus. While I praise this second Odysseus, I do want to note that there was something special about how positively baroque the steel model was at launch. This is doubly true when placing it side by side with the Royal Oaks and Nautiluses, which may have been edgy disruptors decades ago, but I don’t think anyone would consider them as anything but conservative industry establishment darlings at this point. 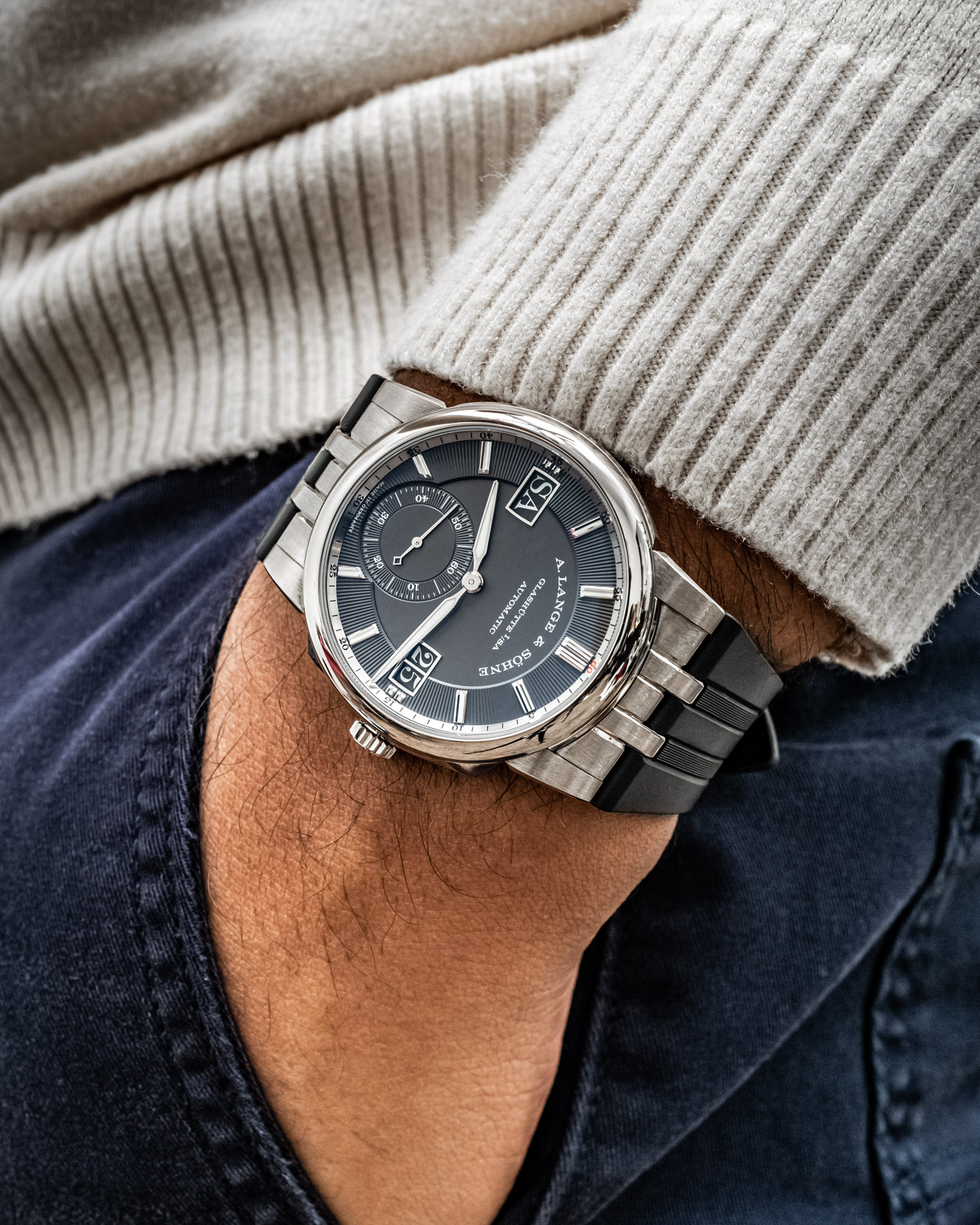 The white gold case measures 40.5mm-wide and 11.1mm-thick, which are pretty broadly appealing dimensions. Furthermore, the 120M of water resistance is robust enough to justify wearing the Odysseus on a variety of boats commensurate with one’s net worth. In fact, it should be solid with anything short of diving. This is quite a crucial aspect of a successful “leisure” watch and goes pretty hand-in-hand with the peace of mind of not worrying about messing up a bracelet.

Is the white gold Odysseus perfect? No, but it’s close. I could do without the protruding lug modules that lead into two tracks on the strap, though I do have to give credit for the thoughtfulness in attempting to design a seamless transition from case to strap. I’d love to see the A. Lange & Söhne Odysseus come with both the strap and bracelet in the future, though that may be simpler to introduce on a steel version. 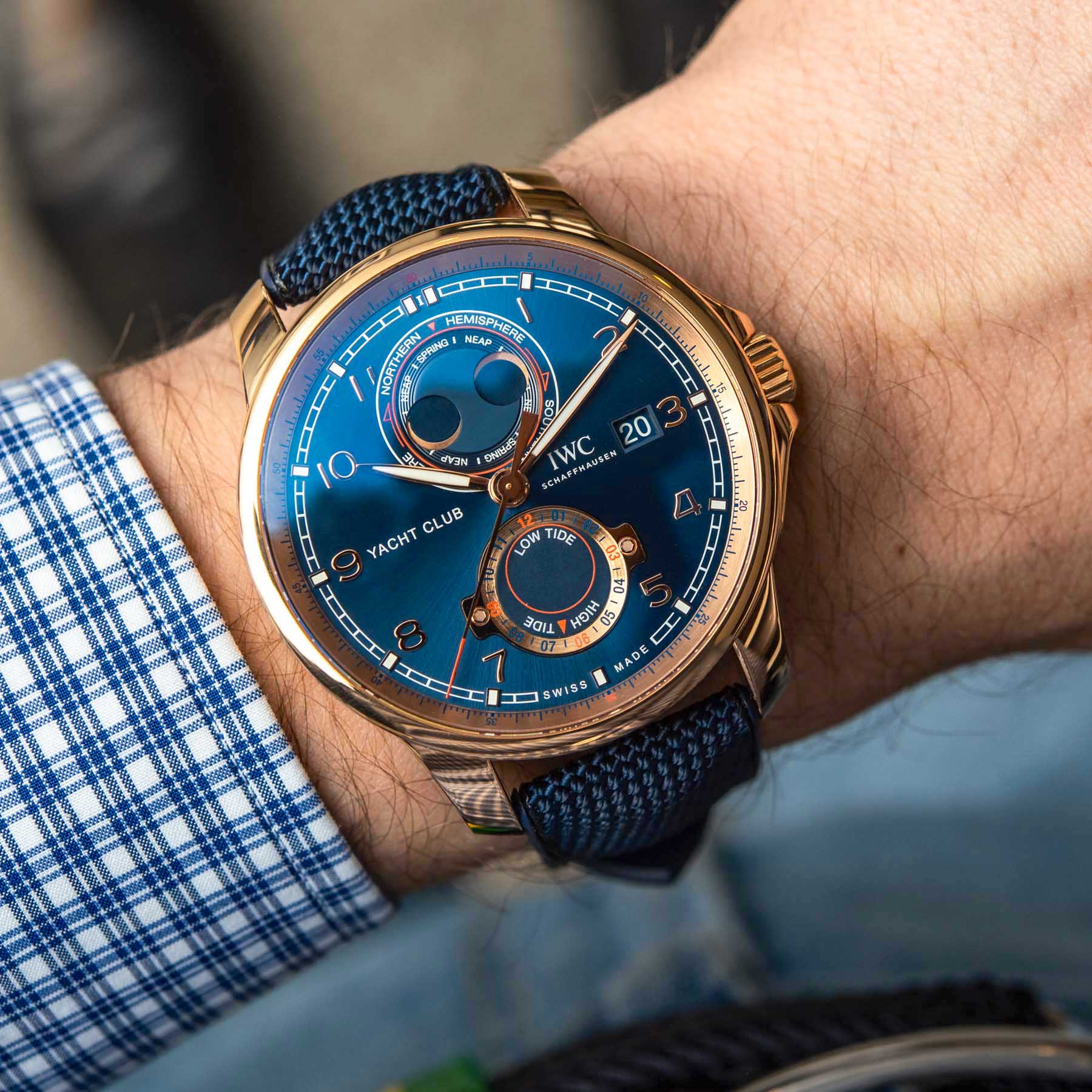 With David getting first pick with a gem-encrusted Hublot (if you’ve ever handled one, you already know – few do innovative gem-setting better) and Bilal laying claim to the year’s exceptional white gold Odysseus, I’m left with my third pick from this year, though it’s hardly a slouch by any stretch of the imagination. The IWC Portugieser Yacht Club Moon & Tide ($34,000 USD) dropped back in April, and it’s remained a favorite ever since. Currently rendered only in precious metal, this release is built around IWC’s newly refreshed Portugieser and is outfitted with a brand new moonphase and tide indicator complication (a mechanical combination referred to as a “mareoscope”), that’s not just innovative and beautifully executed, but also strangely practical – a series of characteristics that are just so classically IWC. I’m honestly not sure what excites me more about this reference: the sumptuous and sporty blue and red gold tones, the newly proportioned Portugieser case, or the simple fact of what it might hint at in the future for IWC. This is an über-cool and unique complication that lends itself a whole host of possibility once deployed in a wider range of nautical-themed watches – and for as much as I’d love to see a stainless steel Yacht Club Moon & Tide, I’d really love to see it in a stainless steel Aquatimer — y’know, something that costs around $20,000 less. 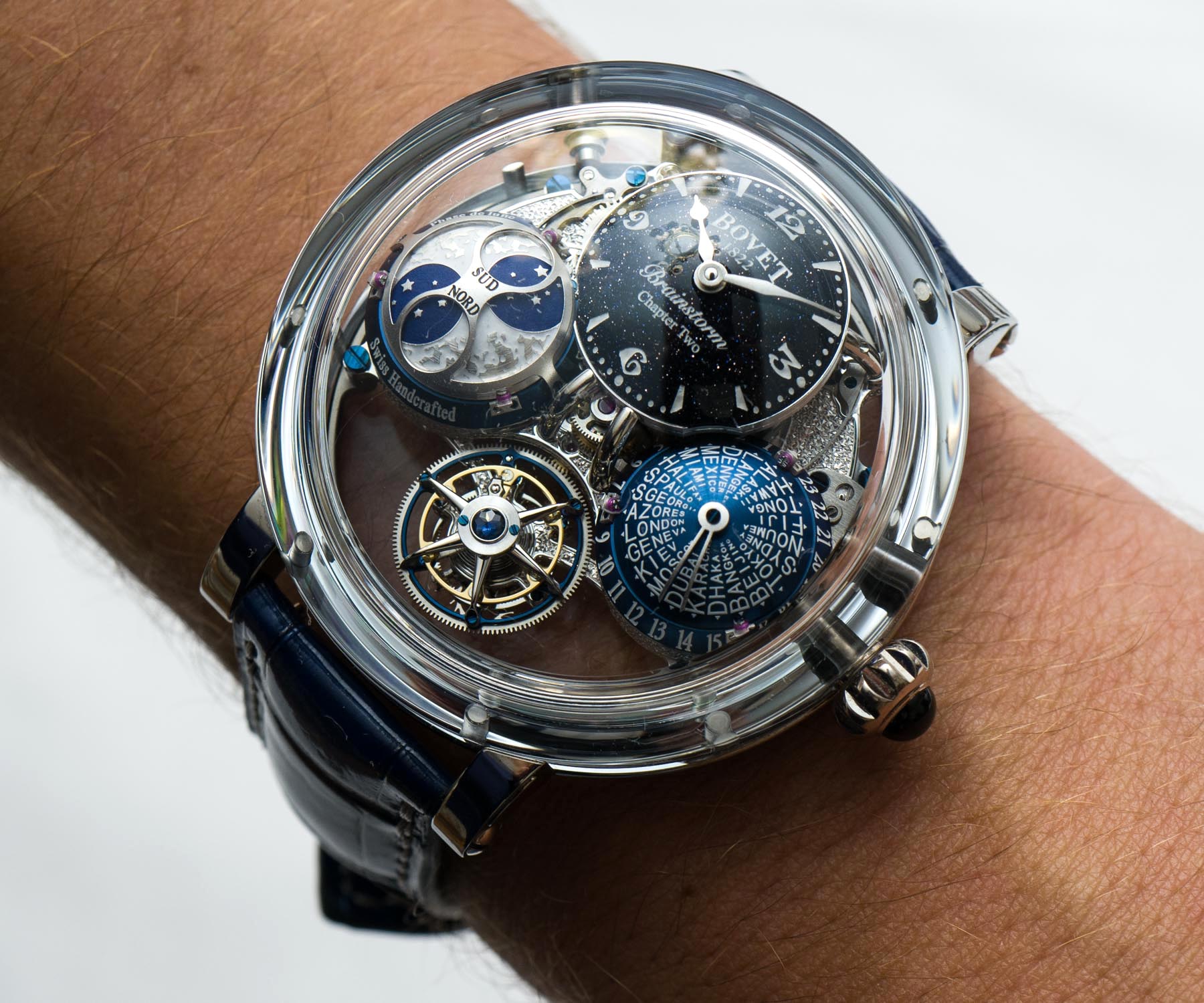 “Money no object” is perhaps the most dangerous trio of words in the English language, especially to a watch enthusiast. Those three little words open up a realm of possibilities many never even dream of. Amidst all the confusion and concern of 2020, this has still been an impressive year for “money no object” timepieces, regardless of the optics of unlimited consumption in the midst of a global pandemic and economic downturn. This realm of haute horlogerie is a place for spectacle, and one of the most spectacular watches of all this year is the Bovet Récital 26 Brainstorm Chapter Two. As much a wearable art installation as it is a timepiece, every aspect of the Bovet Récital 26 Brainstorm Chapter Two seems to be designed for maximum visual drama. The double-faced flying tourbillon, the sloping sapphire case, the architectural blued domes of the subdials, and the aventurine dome of the main dial at 12 o’clock all combine into a magnificent intersection of engineering and artistry. Even the glossy liquid-blue alligator leather strap is engineered for maximum shock and awe, with hand-finished contrast stitching in fine platinum thread. The Bovet Récital 26 Brainstorm Chapter Two ($383,500) is certainly not for the faint of heart, but for sheer magnificence, few things even come close.