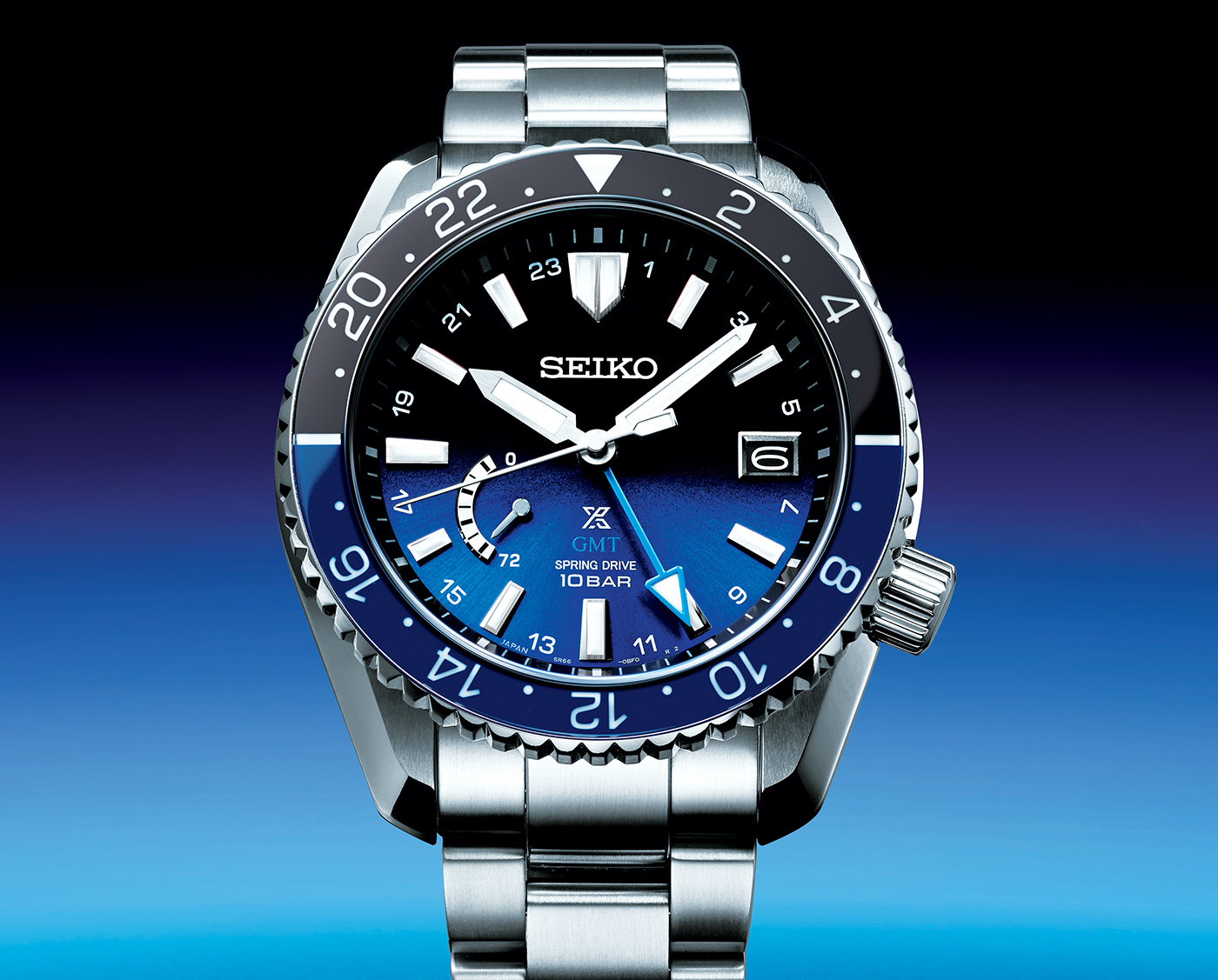 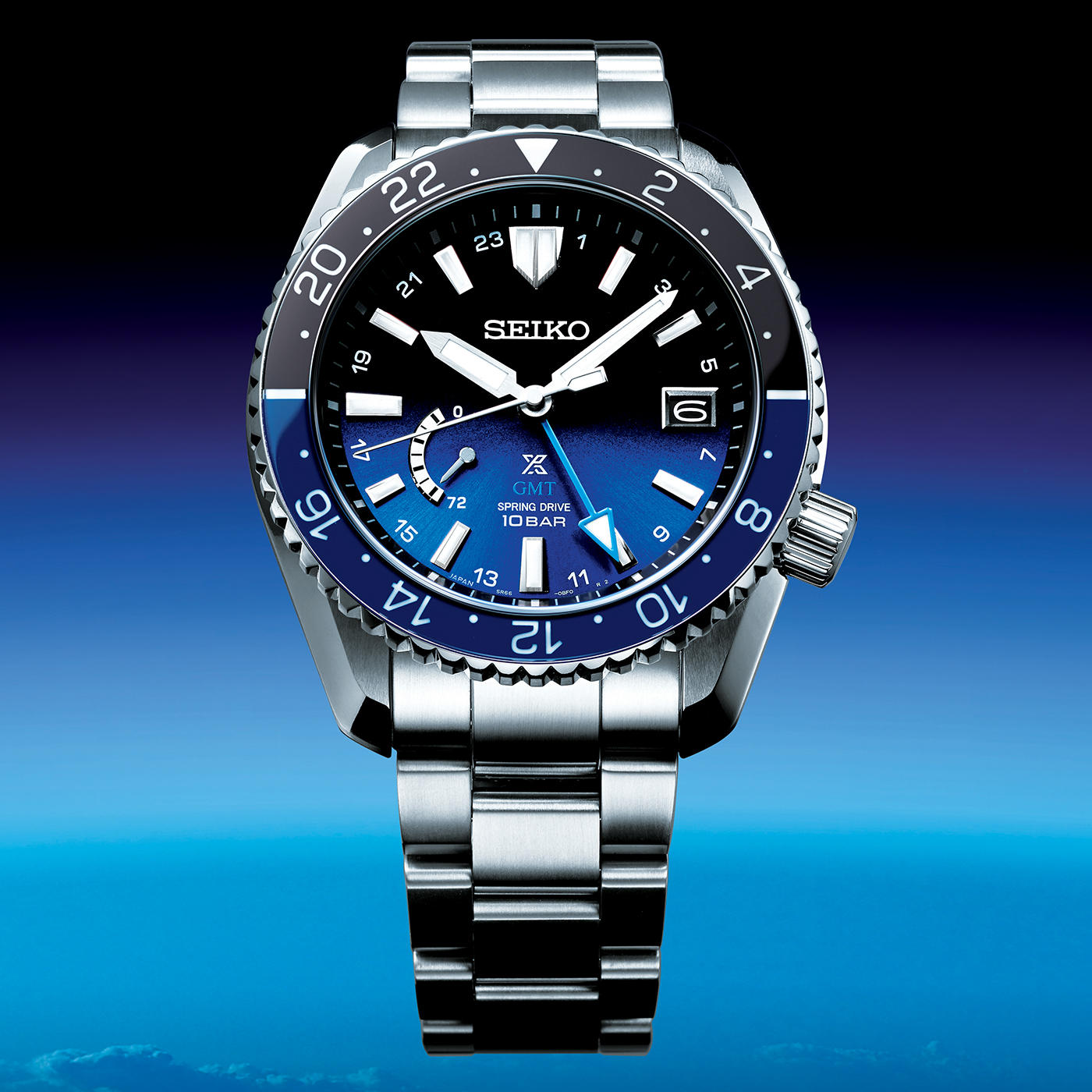 Over the past several years, Seiko has begun to design its limited edition releases not just around unique finishes or colorways, but around more evocative narrative ideas. The brand has centered recent limited edition releases around ideas as diverse as the texture of Antarctic undersea moss and a perfectly made Negroni cocktail, but the most common theme surrounding these concepts is the look of the natural world. Seiko has looked to the very edge of the world as the inspiration for its latest release, producing a new Spring Drive GMT model meant to evoke the transition between the upper atmosphere and outer space. The resulting Seiko Prospex LX SNR049 Sky Limited Edition brings a compelling two tone dial treatment to one of mainline Seiko’s highest-end sports models for a truly dramatic look. The 44.8mm titanium case of the Seiko Prospex LX SNR049 Sky Limited Edition follows the same signature “Grammar of Design” form as its regular production counterpart, wearing significantly smaller than the numbers suggest thanks to a severe undercut midway down the case sides and lugs. The case finishing is a mix of brushing and Zaratsu polishing, protected with Seiko’s proprietary super-hard coating. The two tone sapphire GMT bezel insert is likewise carried over from the standard production variant,  which in initial images looks to blend well with the two tone dial. Water resistance stands at a respectable 100 meters. The Prospex LX SNR049 Sky Limited Edition’s most prominent change, of course, is the main dial surface. While the gradual transition from pure black at 12 o’clock to a deep sky blue at 6 o’clock is dramatic at first glance, close inspection reveals another of shifting as the glossy black surface becomes a dynamic blue sunburst. This split tone look likely won’t be for everyone, but the level of finishing involved is compelling. The dial layout itself is more or less carried over from its predecessors, with the arrow tipped GMT hand rendered in a vibrant sky blue as a focal point. Seiko powers the Prospex LX SNR049 Sky Limited Edition with the manufacture 5R66 Spring Drive GMT movement. Combining elements of a mechanical movement with a quartz regulator and a completely smooth seconds hand sweep, the 5R66 offers accuracy of +15/-15 seconds per month and a robust 72 hour power reserve. Seiko finishes the watch with a three link oyster style bracelet in brushed titanium. While not the most innovative of Seiko’s limited edition pieces, the unique dial finishing of the Seiko Prospex LX SNR049 Sky Limited Edition helps it to stand out dramatically from both the competition and Seiko’s own lineup. Only 400 examples of the Seiko Prospex LX SNR049 Sky Limited Edition will be made, and will be available from authorized dealers in November 2020 at an MSRP of $5,500. For more information, please visit the brand’s website. 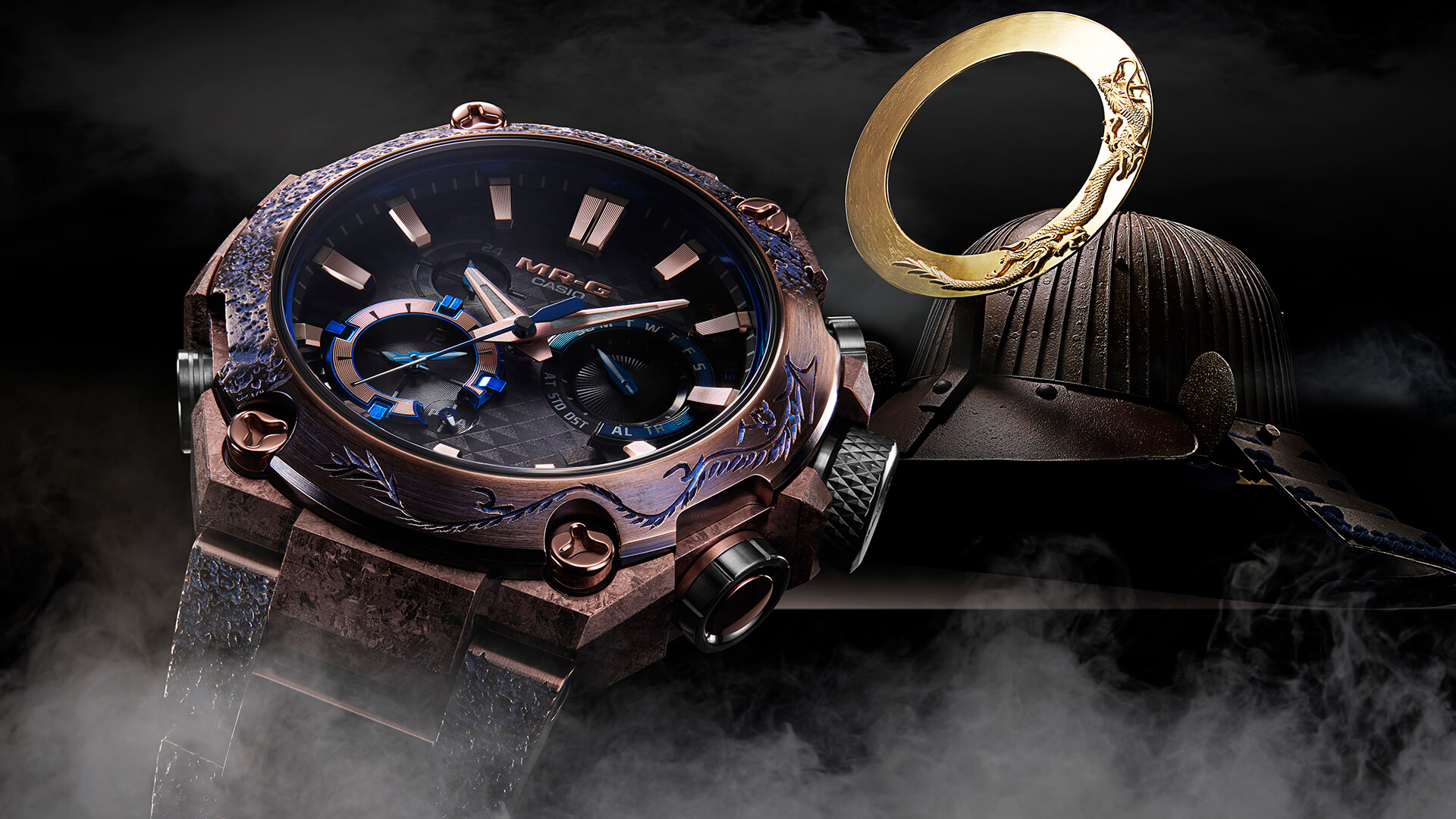 Few brands can match the Casio G-Shock line for sheer variety, not just in function and form, but also in price range. While most enthusiasts tend to associate the rugged G-Shock series with the original affordable resin cased digital designs that still form the backbone of its lineup, Casio also uses more premium series of G-Shock models to showcase truly world class finishing work. The G-Shock MR-G series stands at the pinnacle of the lineup, and for its latest release Casio has combined its own complex high tech design language with a traditional Japanese motif inspired by the helmets worn by samurai warriors. The limited edition Casio G-Shock MR-G MRGBH2000SH-5A Shougeki-Maru is a handcrafted melding of the past and future of Japanese design. The massive 49.8mm case of the G-Shock MR-G Shougeki-Maru is by far the most captivating part of the piece, with a unique rusty look to the titanium material. This aged style is achieved through multiple layers of brown and blue ion plating, allowing a brand new titanium case to evoke the look of a centuries-old rusted steel helmet. The bezel takes the look several steps further with the use of a traditional Japanese technique known as tetsu sabji, creating a series of pitted marks that are then filled with contrasting navy blue ion plating. The case is finished with a hand engraved dragon partially circling the bezel, carved by noted metalsmith Masao Kobayashi. The dial of the G-Shock MR-G Shougeki-Maru continues the navy blue touches and classical Japanese motifs, with a triangular pattern overlaid on the black main dial that has appeared in Japanese art for centuries. The in-house 5652 quartz movement inside the G-Shock MR-G Shougeki-Maru is typically complex for the brand, boasting Bluetooth connectivity, radio controlled time calibration, Casio’s own Tough Solar charging system, LED dial illumination, a day/date complication, chronograph, and much more. The three link integrated bracelet features the same tetsu sabji finishing as the bezel, for a cohesive and dramatic look. While a far cry from Casio’s usual fare, the traditional finishing techniques of the limited edition Casio G-Shock MR-G MRGBH2000SH-5A Shougeki-Maru make it a compelling exercise in distinctly Japanese design. While the piece is a limited edition, Casio has not yet released the exact edition size. MSRP for the Casio G-Shock MR-G MRGBH2000SH-5A Shougeki-Maru stands at $8,000, available exclusively through select G-Shock retailers beginning in November 2020. For more details, please visit the brand’s website.