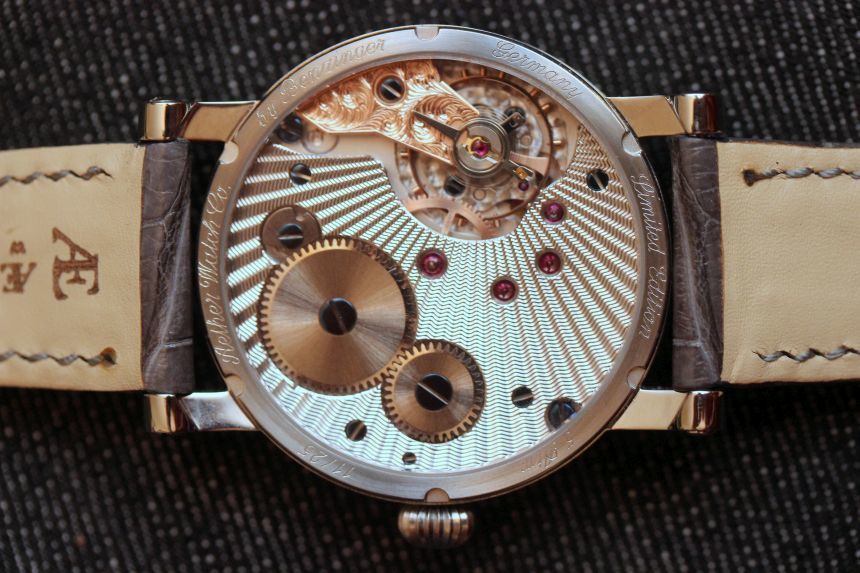 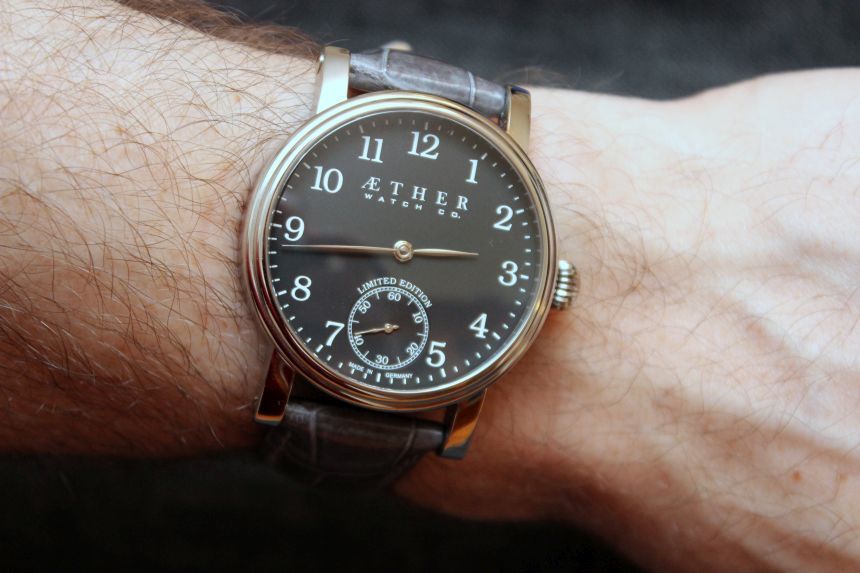 Even with having been immersed in writing about watches as I have been, it seems that there are an innumerable number of watch brands out there that I am simply not aware of. While this means that we certainly are spoiled for choice, it also means that we may, at times, be overlooking some rather hidden gems out there. Such is the case with today’s watch, the Æther by Benzinger. 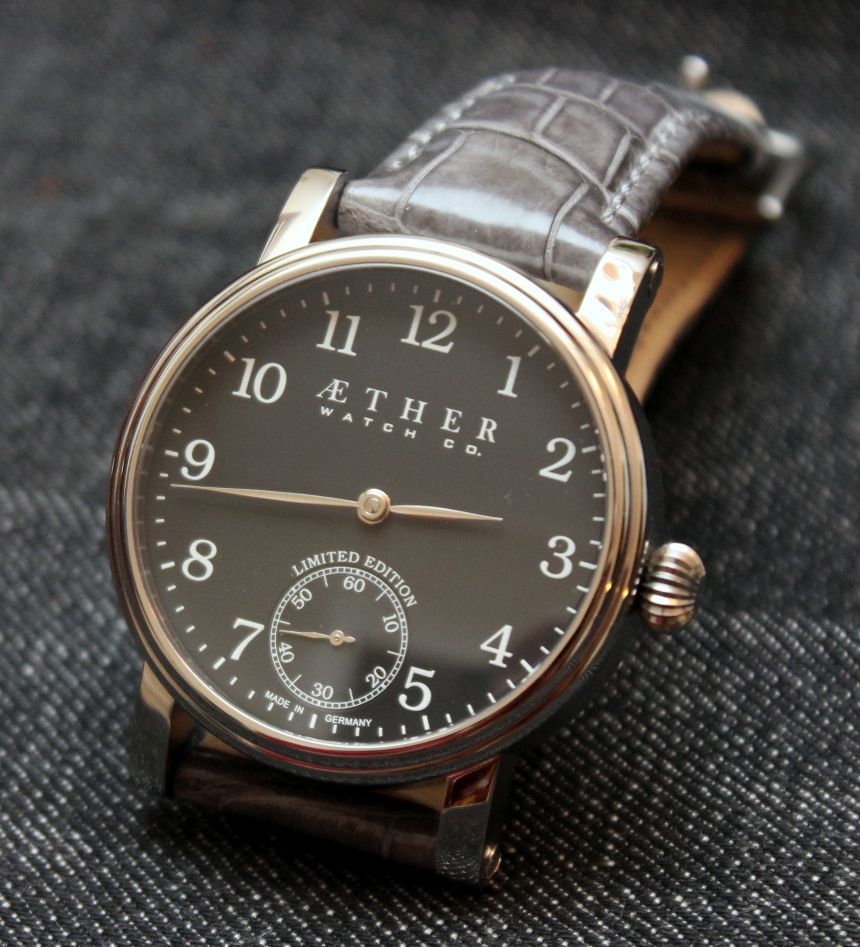 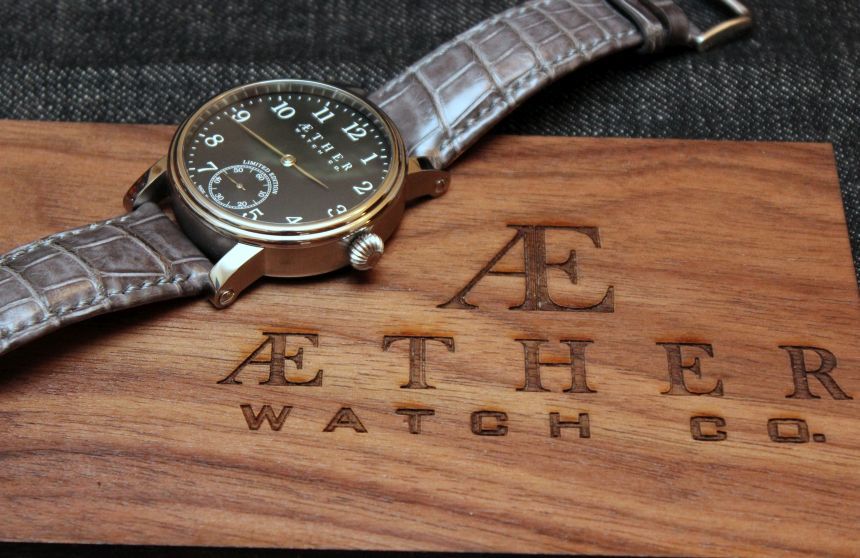 For those unfamiliar, Æther Watches call Phoenix, AZ, home and started up shop in 2012 as an extension of the business built up around Stone Creek Straps. That meant another very pleasant surprise with the review, as Æther watches come with Stone Creek Straps installed, with some customization options available. For me, this further cemented my interested in a good, exotic leather strap (an interest sparked by the Smith & Bradley Heritage). 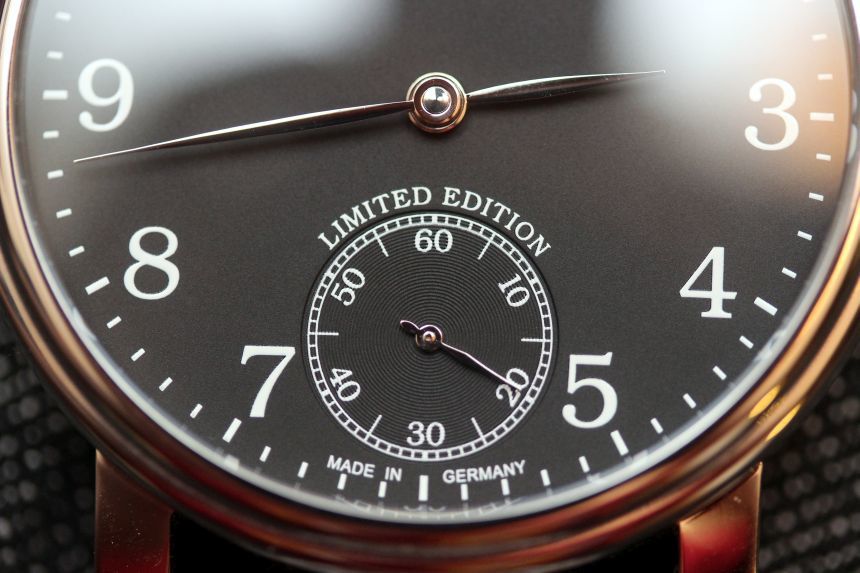 Here, on the Æther by Benzinger, it was a padded alligator in a mid-grey hue that worked to pick up the grey in the dial, but not give too dark of a look on the wrist. It has a bit of a polish to it as well, which gives it a dressier look. As far as fit goes, this one was great right out of the box. The padding logically stops before the strap gets under your wrist, which means reduced bulk and an easy time slipping the tapered end through the buckle. The strap also contributed a lot to the comfort of the watch on the wrist. 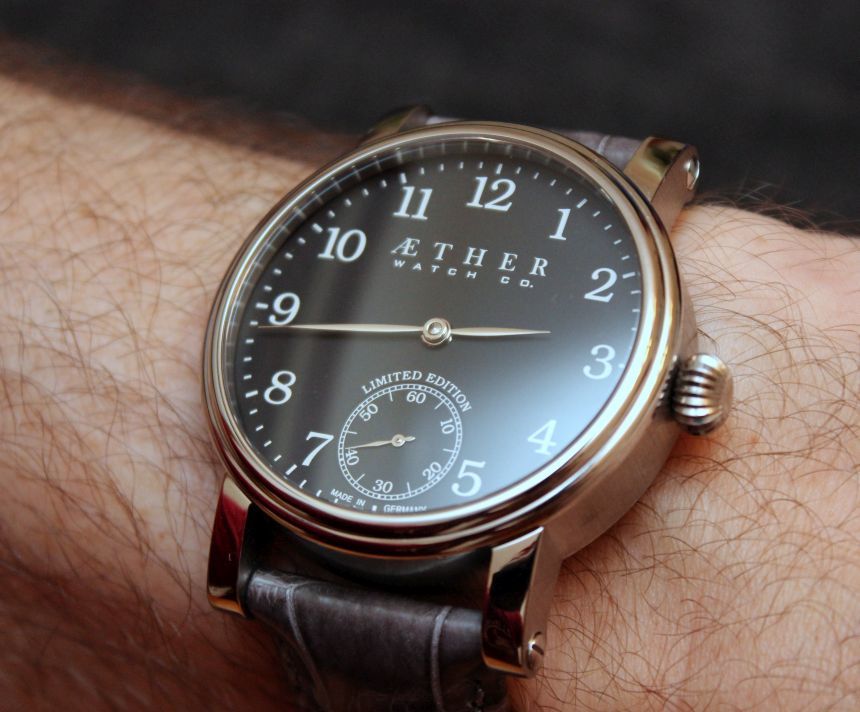 The lugs on the Æther by Benzinger are fairly long and curve down, which allows the 42mm case to get tight on the wrist. On my wrist, there was some slight overhang, but it is something I really only picked up on when reviewing the photos I took; it was not something I even noticed while it was on the wrist. Moving on up the case, you come to the bezel, which was something that I am unused to seeing – a sort of rounded off double-step. This is a nice change of pace from the standard angled bezel you see on watches, and its polished surface presents a sharply contrasting brushed (almost machined) finish on the sides of the case. 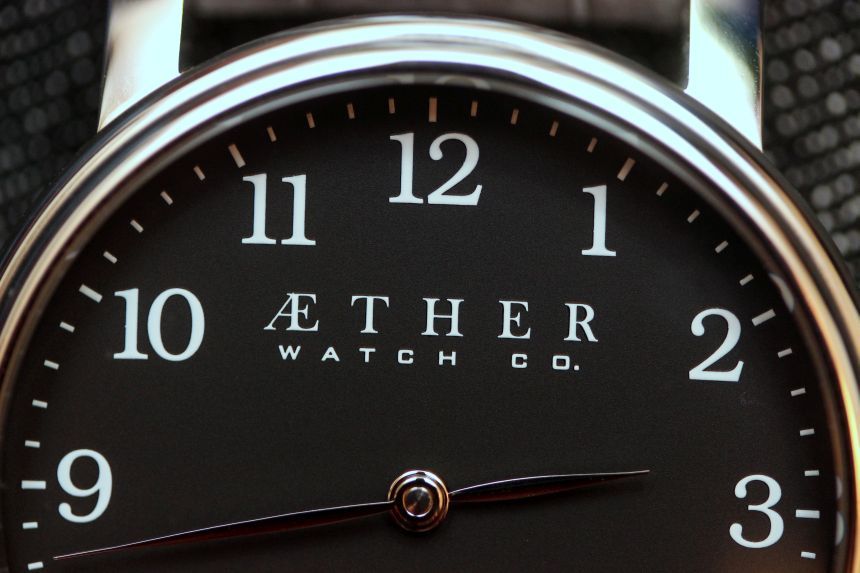 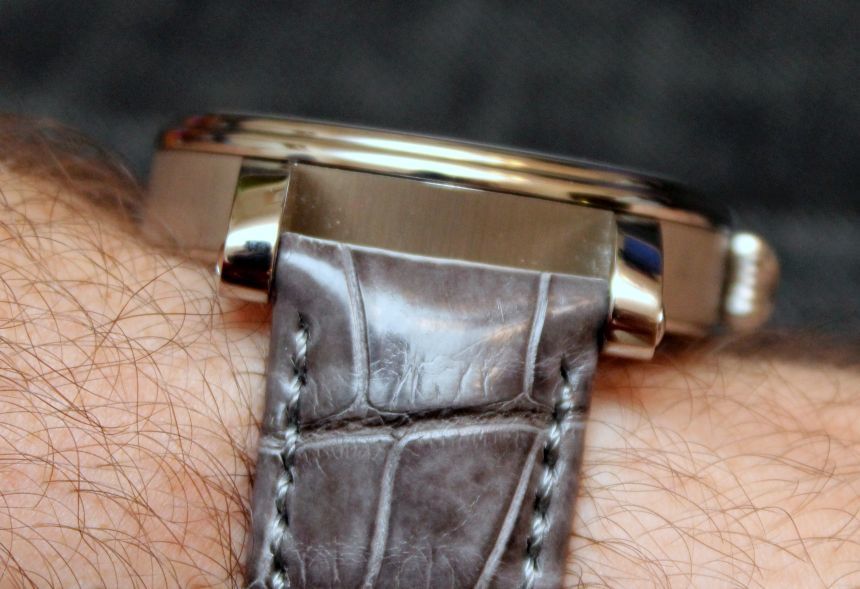 Tucked into that bezel, we of course have the domed sapphire crystal, under which we have a clean, but very full dial. The printed numerals are fairly tall, and the logo is a bit larger than what you see on the Æther AE01 (which I reviewed over here). The subseconds dial appears slightly larger as well, which all combines to give it that fuller feeling. That said, it does not feel cluttered, due to the fairly thin lines used on the printed dial. The handset used here looks to be identical to the Æther AE01, which means I had identical thoughts on it. Being slender and polished, they do stand out against the grey dial easily enough – in the right lighting. If the light is not catching the hands, you do need to turn the wrist a bit to get a better angle. Not that that is a time-consuming proposition, it is just something I look for in terms of instant readability. Not a deal-breaker, of course, and something many watches with polished hands face, especially slender ones like we have on the Æther by Benzinger.

What is driving that handset is where the real treat is, and is hinted at by the “Special Edition” text above the subseconds, and even the name of the watch – Æther by Benzinger. Who is Benzinger? In this case, it refers to Jochen Benzinger, who Ariel wrote about back in 2008. What Benzinger does (and has done here) is apply truly old-school engraving methods, giving some rather intricate – and amazing – decoration to the watch. To see this, you simply need to flip the watch over to see the handiwork through the large sapphire crystal in the caseback. 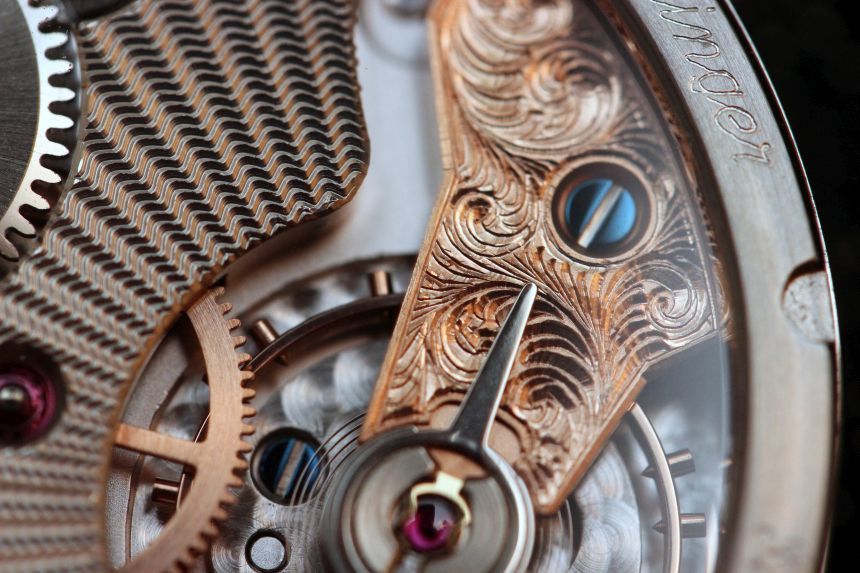 The Æther by Benzinger movement starts life as a regular, manually-wound ETA 6498. If you compare it to the same movement found in the Æther AE01, you immediately notice some changes, aside from the engraving. First off, the plate is different. Here, we have a 3/4 plate which is finished in rhodium (as opposed to the two-piece plate), and the balance arm and wheel have been finished in rose gold. Then we get to really amazing stuff, which is the decoration applied. The 3/4 plate has a pattern that at first looks like a sunburst, but on closer inspection (at least to my eye) looks more like a sea shell with a sort of herringbone pattern overlaid.

Whatever you call it, it is eye catching. Juxtaposed to that symmetry you have the balance bar, which is filled with graceful curls that call to mind leaves, or perhaps conch shells. There is one more bit of engraving hiding on this side of the watch – on the caseback itself. Around the outer edge, you have fine, cursive text appearing, including the individual serial number of the watch (out of the 25 pieces that have been made). 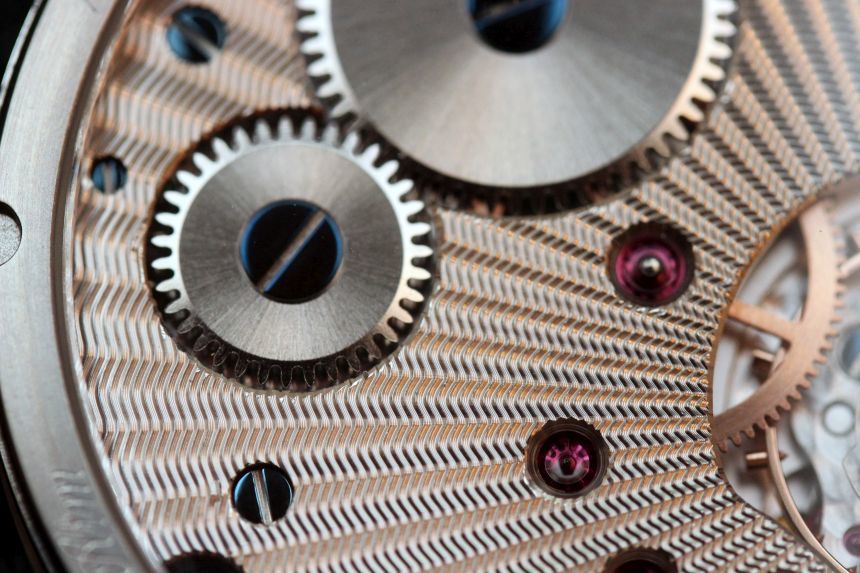 Quite obviously, the movement decoration is really the star of the show when it comes to the Æther by Benzinger, which makes it a shame that you cannot see any of the work when you have the watch on your wrist. Perhaps that is part of the appeal, as it keeps the most beautiful part of the watch a secret hidden away for the owner, only showing itself if he (or she) chooses. So, what is it like to wear the watch? Rather comfortable, as I mentioned up top. The 42mm case is only 11mm thick (so it slips under a cuff easily), and the watch weighs in at 78g, so it’s a rather lightweight affair as well. Thankfully, the onion crown on the watch is not oversized, so I had no issues with it digging into my wrist (and it worked just fine for winding up the watch). Wearing it at the office, I liked how “under the radar” the piece ended up being, given the fact that I was wearing a limited-edition luxury watch on my wrist. 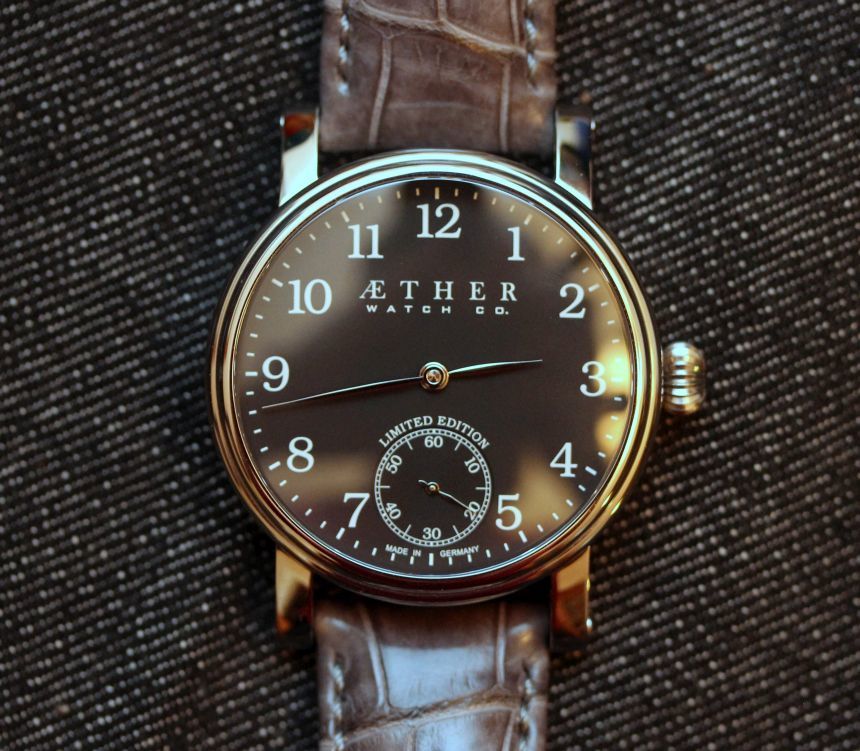 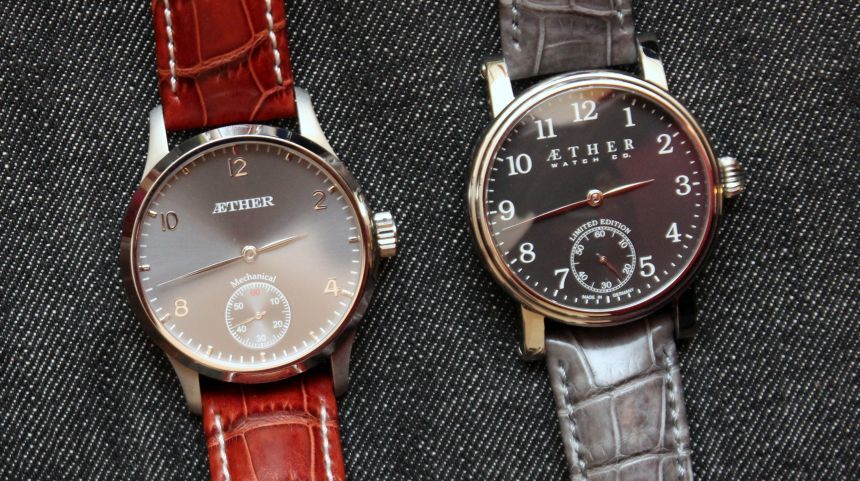 That really is the story here, I believe. For being a limited-edition watch (25 pieces) with an asking price of $3,900, it does not shout about it’s exclusivity. It maintains a subtle profile, with details in the case (and of course the movement) only noticeable to the owner, or someone who would spend a long time looking at the watch. For my tastes and preferences, that is a great way to go. Yes, you have a great watch on your wrist, but it is the sort of thing that is sort of like a secret, known only to you and those who pay attention to watches, such as you, dear reader. As Ariel mentioned in his prior writeup, Benzinger watches are on the uncommon side to run across, so the Æther by Benzinger is a tidy way to gain entry into that exclusive club. aetherwatches.com 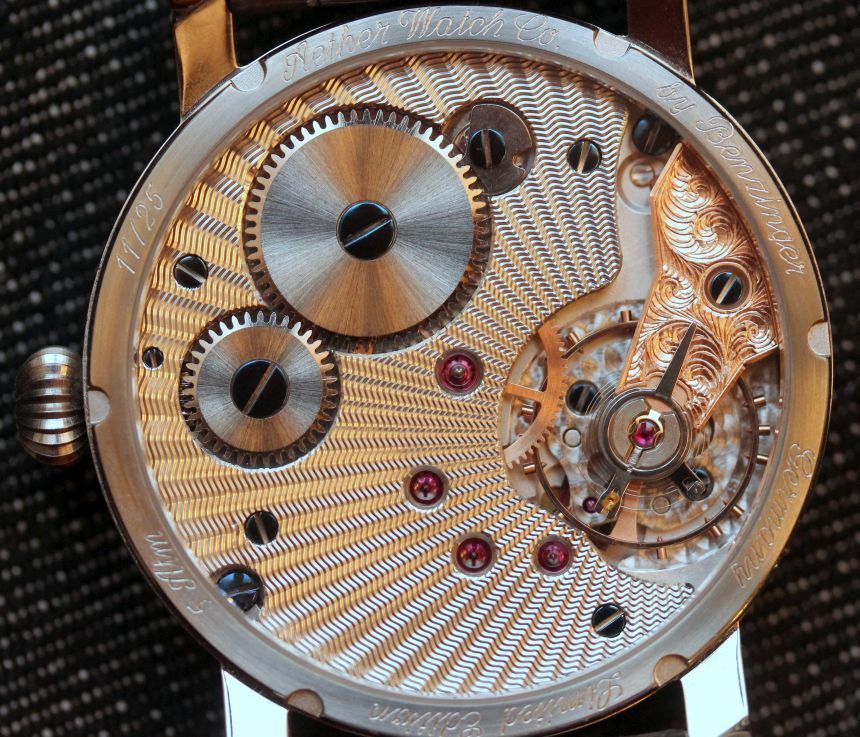