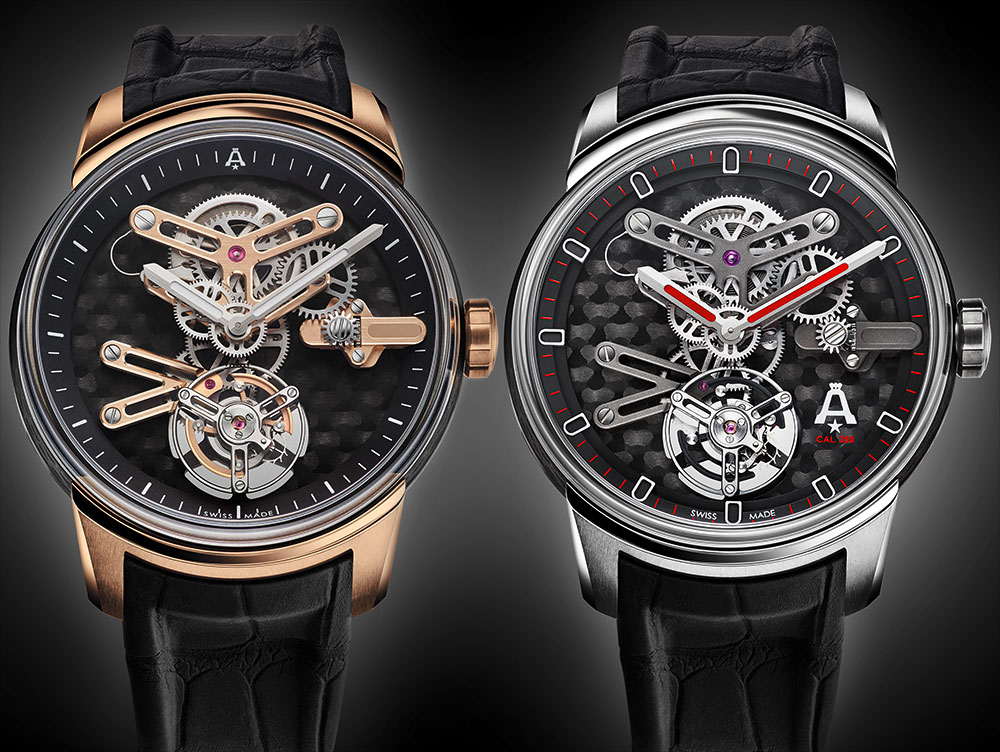 Since the brand’s revival in 2015, Angelus has been producing highly engineered, avant-garde timepieces under the direction of La Joux-Perret in Switzerland. Their most notable releases, which include watches like the Angelus U10 Tourbillon Lumiere, fall under their product line known as the Urban Collection. For Baselworld 2017, Angelus will be marking a new chapter in this collection with the introduction of the Angelus U21 Tourbillon and U22 Tourbillon watches. Perhaps the most intriguing aspect of these two watches is the fact that they offer a fundamental and streamlined look that allows for the movement’s key components to be viewed without obstruction. This is accomplished in part by the integration of a mainplate constructed entirely out of carbon fiber, which makes it appear as if it’s part of the case itself. 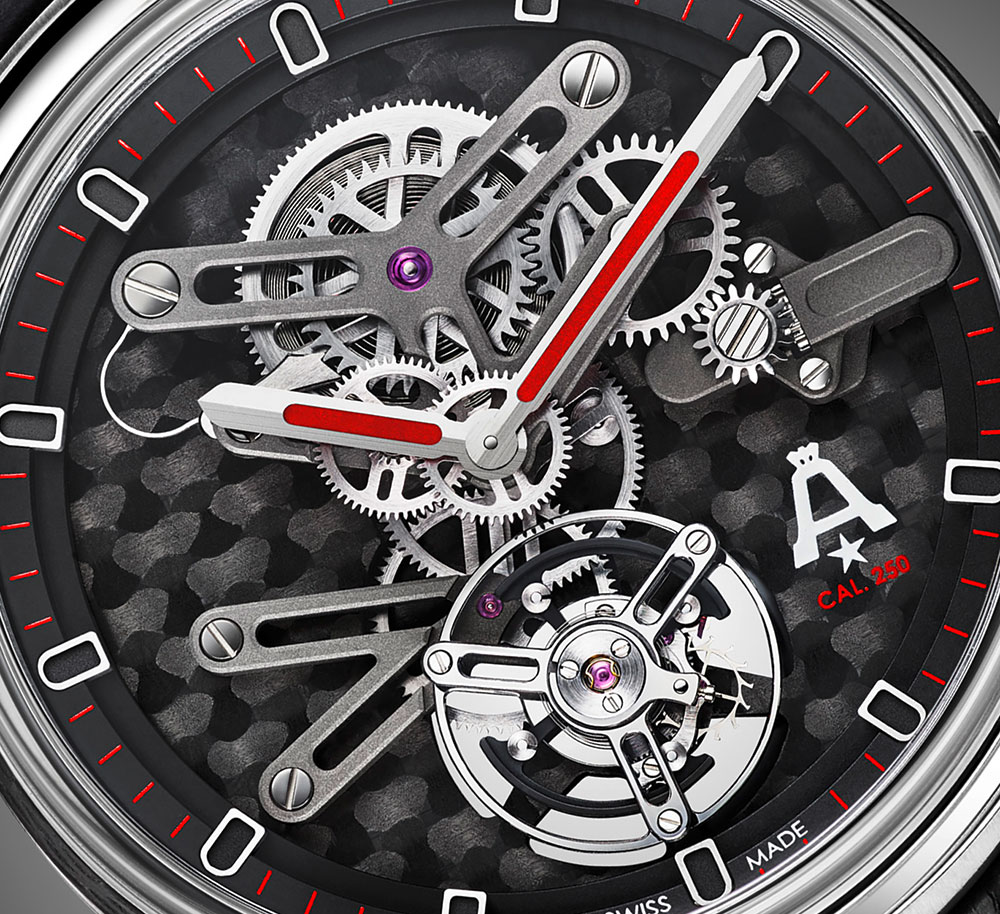 The bezel-less cases on both the Angelus U21 Tourbillon and U22 Tourbillon watches measure in at 42mm in diameter, are 10.3mm thick, and deliver a vastly different look when compared to the Angelus models constructed before the brand’s revival. Both models also feature sapphire crystal casebacks and offer 30 meters of water resistance. This approach in and of itself is yet another reason to love the Angelus of today, as they have chosen to exist and progress as an entirely new brand without feeling the need to shoehorn an endless barrage of tribute models from the Angelus of the past. 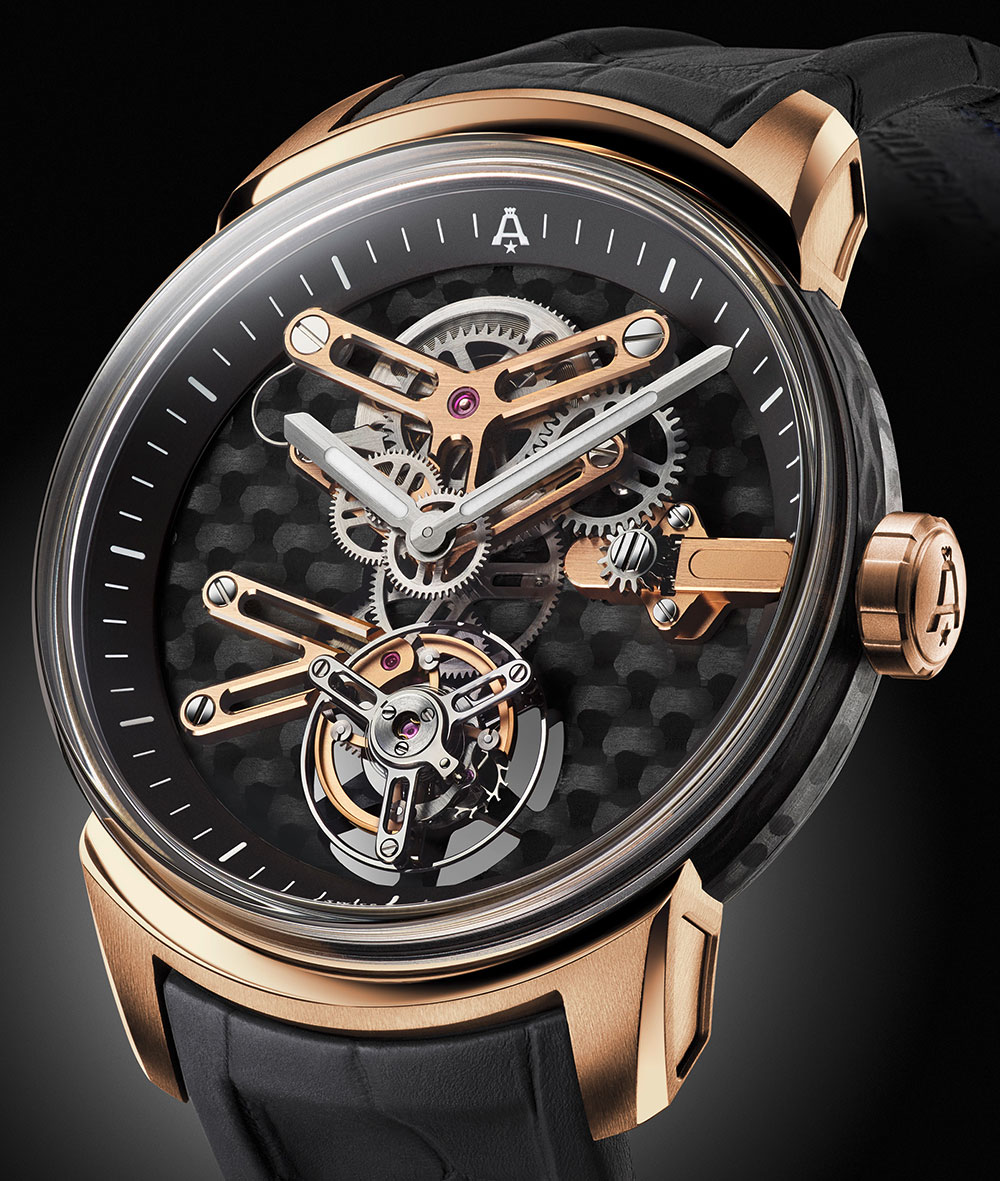 The Angelus U21 Tourbillon watch features a case constructed entirely out of NPT carbon-fiber and 18-karat red gold – a look that goes well with the fully carbon fiber mainplate. To enhance this look, the skeletonized bridges along with a few other movement elements are also finished in 18-karat red gold and we can also find a variety of brushed and polished surfaces throughout. Same goes for the crown, which features a deep engraving of the Angelus logo. 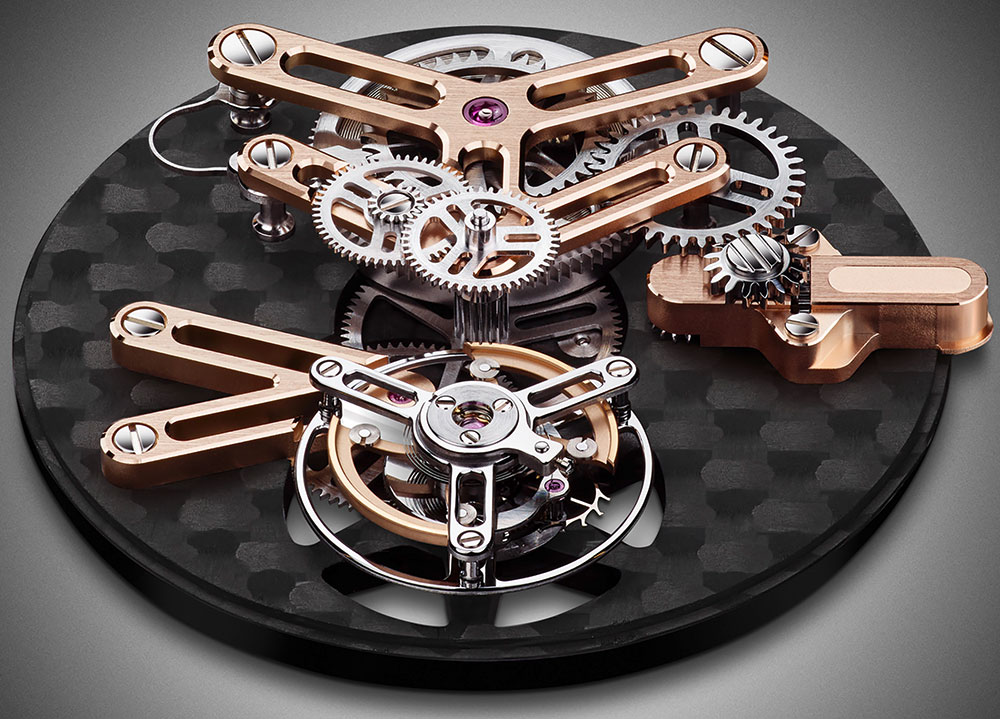 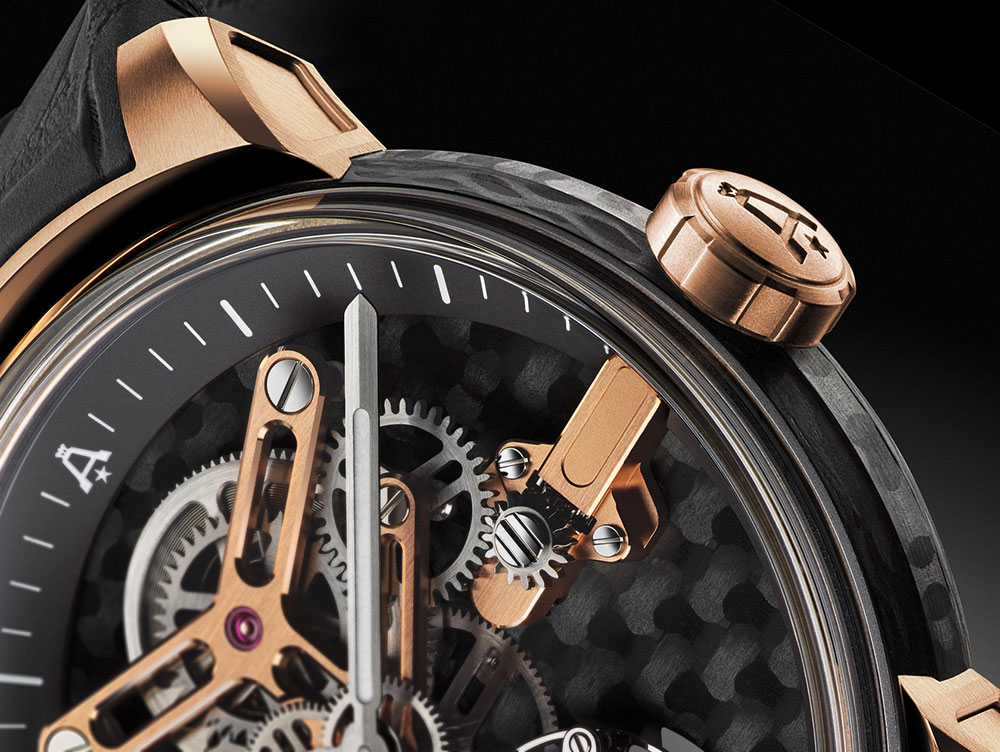 The hands are Rhodium-treated with white Super-LumiNova and emit a deep blue hue for low-light visibility. They are finished in a completely different tone that helps differentiate them from the skeletonized movement components, and that’s just another plus for legibility. Sapphire crystals can be found on either side of the watch and there’s an application of anti-reflective coating on the domed dial side. All of these design touches serve to clearly present the centerpiece of the watch’s design – the flying tourbillon assembly. 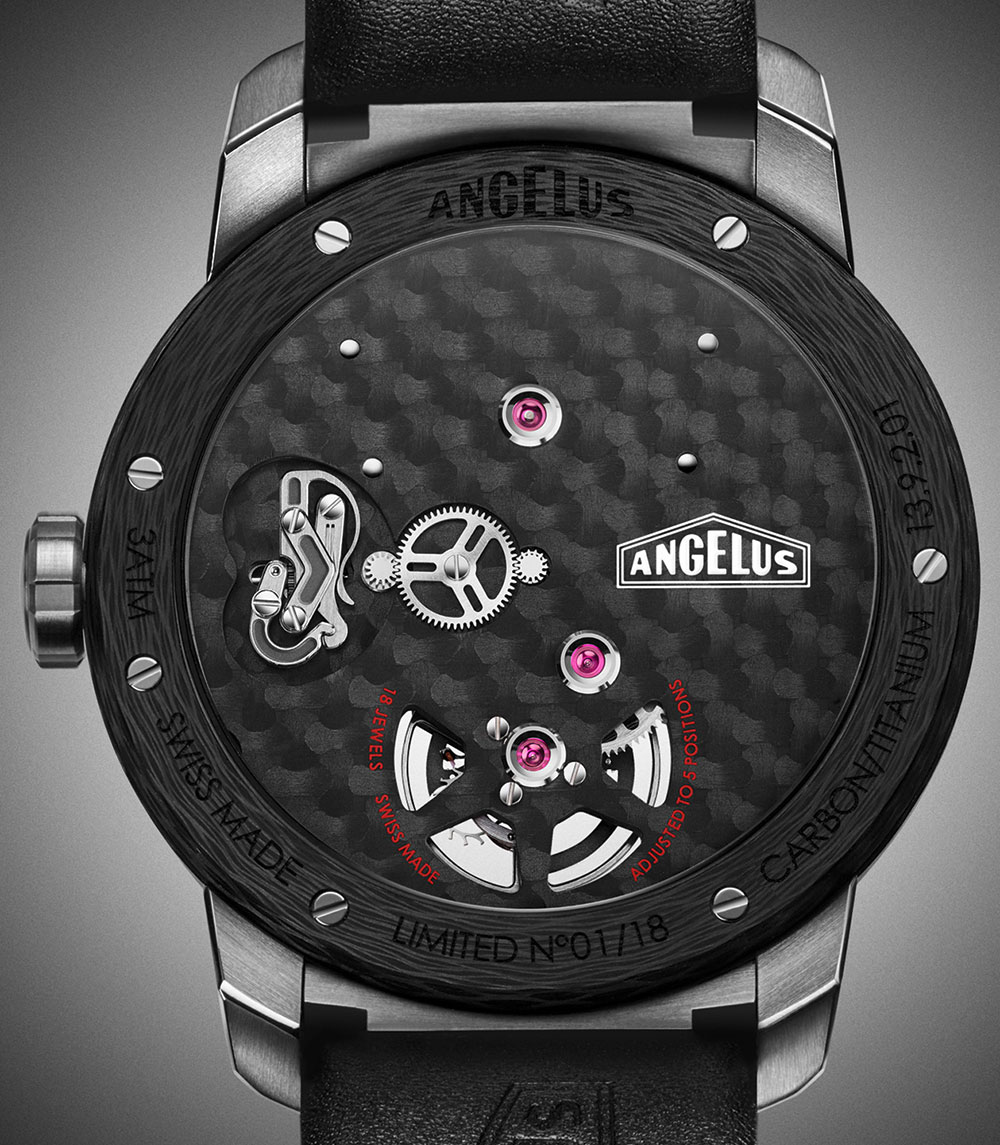 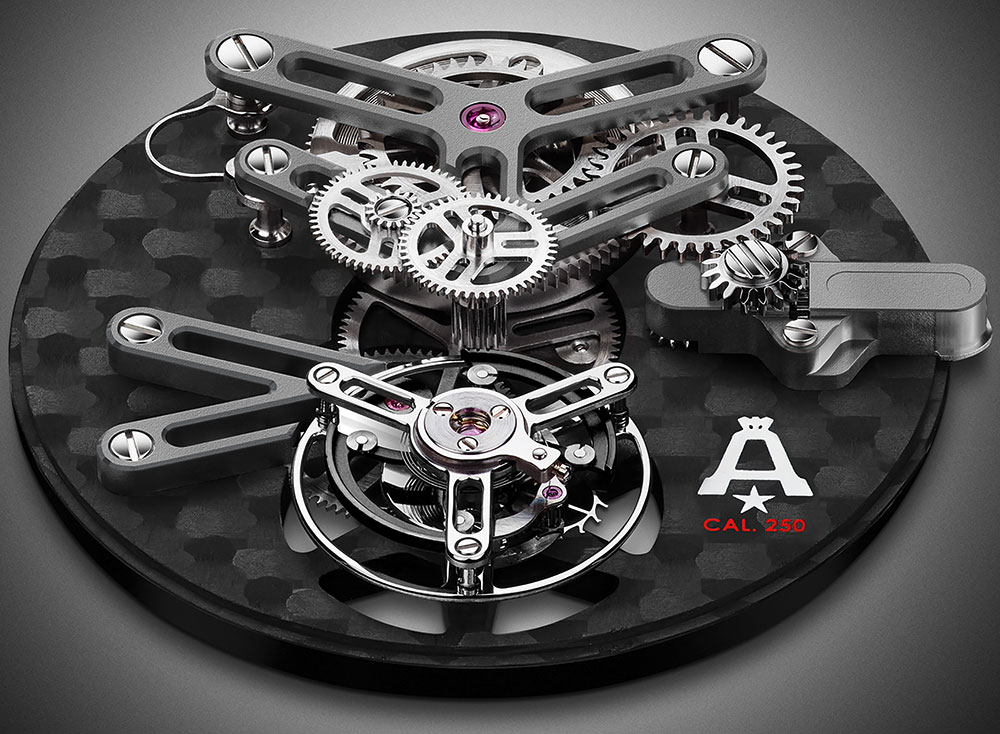 The Angelus U22 Tourbillon, on the other hand, takes weight reduction even further with a carbon-fiber and titanium case that weighs in at just 54 grams. With a slightly more racing-inspired look, the Angelus U22 features a set of red accents that move along the chapter and carry on below the Angelus “A” logo near the 4 o’clock mark. Unlike the U21, this variant features an application of red Super-LumiNova on the hands, something I found myself geeking out about perhaps a little too much upon viewing the images for the first time. While it may just be a matter of personal preference, I find that this kind of material and color combination works best with the carbon fiber mainplate and the visual prominence of the skeletonized movement. 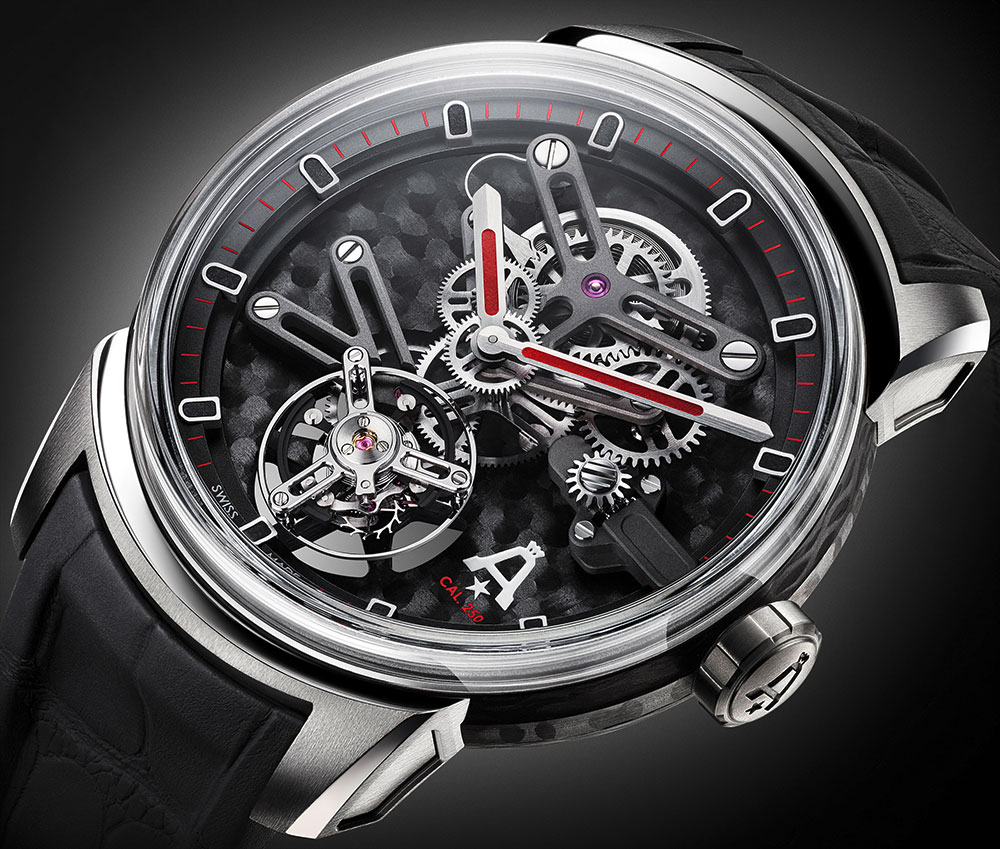 The Angelus A-250 caliber runs as the heart of both models. It operates at 3Hz, or 21,600vph, and delivers 90 hours of power reserve when fully wound. It’s here where we see the careful dedication Angelus put into the movement as it features several components (like the tourbillon cage) that have been hand-chamfered and hand-polished meticulously. Additionally, four gold weights support the variable balance inertia wheel which Angelus claims has been designed for maximum aerodynamic performance and reduced air resistance. Finally, in an effort to support the movement visibility, the titanium mainspring barrel bridge is fitted directly to the carbon fiber mainplate through the use of slim pillars – a feature that I find enhances the three-dimensional effect the watches strive for.

Both the Angelus U21 Tourbillon and Angelus U22 Tourbillon watches come on black alligator leather straps with titanium inserts that serve as a nice match with the case finishes. 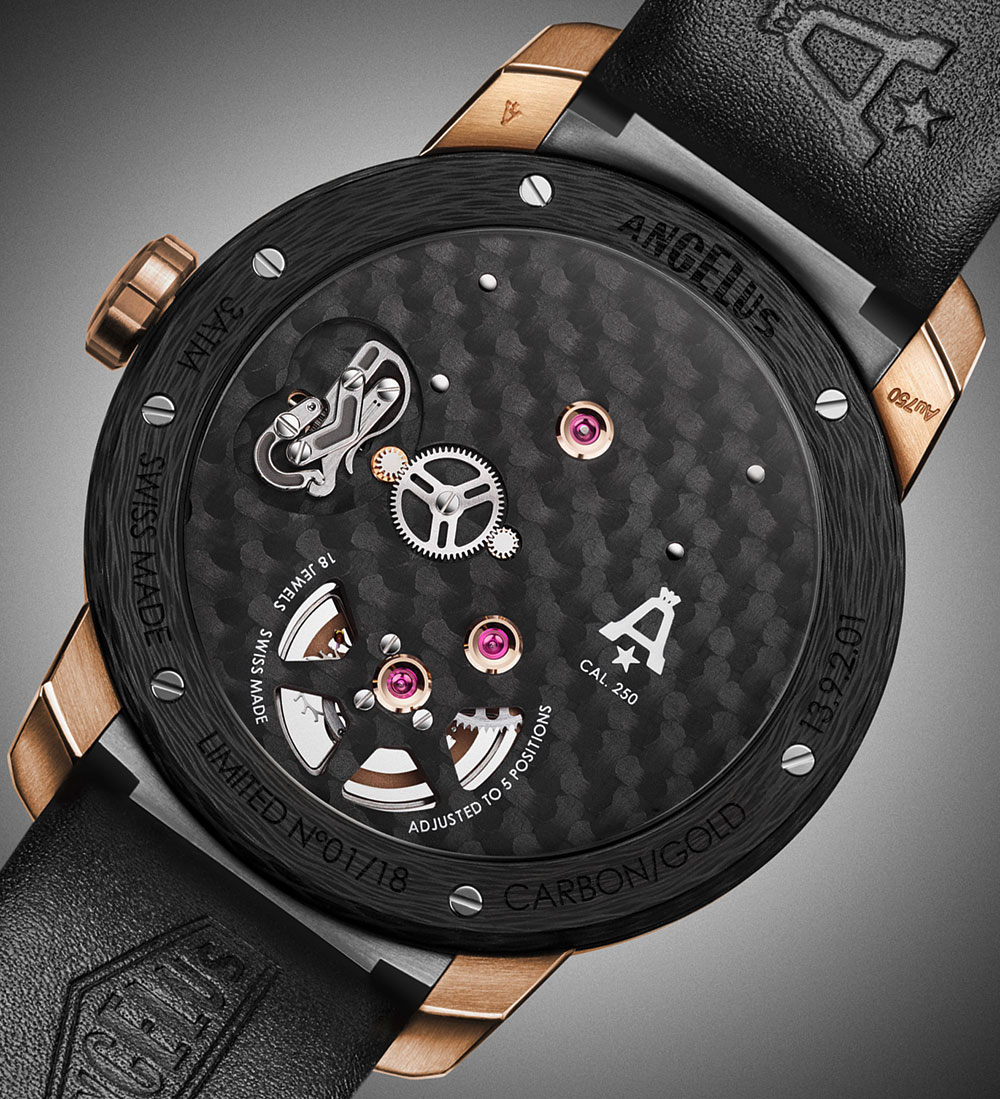 As a brand that doesn’t seem concerned with making modern pieces overtly tied to a previous legacy, I think that Angelus works well to symbolize true progression with their range of high-tech, contemporary timepieces. The same can be said for Arnold & Son, which is a sister brand under the same corporate umbrella and founded revived in modern times by the same man, Sebastien Chaulmontet. Both of these models exist as interesting developments for the Urban Collection, and as someone who has been hooked since the U10, I’ll be excited to see what they do next in terms of material integration and movement architecture. The Angelus U21 Tourbillon and U22 Tourbillon watches are each limited to 18 pieces and priced at $52,200 and $37,995, respectively. angelus-watches.com