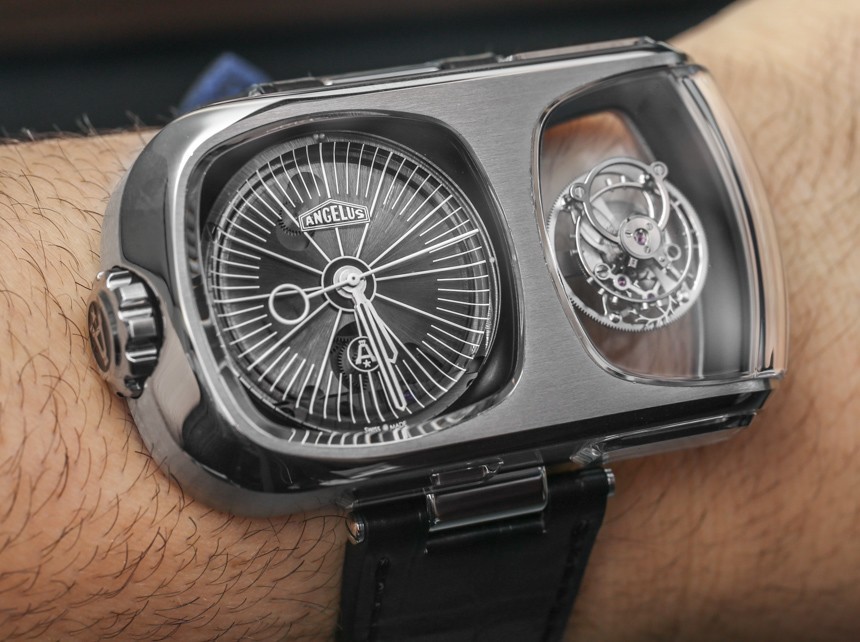 At Baselworld 2015, I got a chance to check out the first watch from the revived Angelus watch brand, as well as more about the story of how the brand came back and where it will go in the future. To refresh your memory of the Angelus U10 Tourbillon Lumiere watch, I recommend you consult our debut post here, where we talk more about the design concept as well as the technical specifications of this very unique and most certainly avant-garde timepiece. 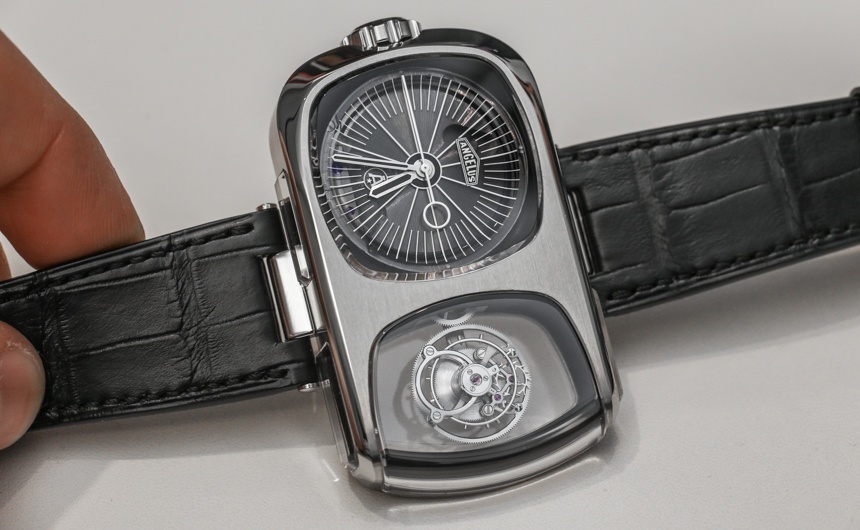 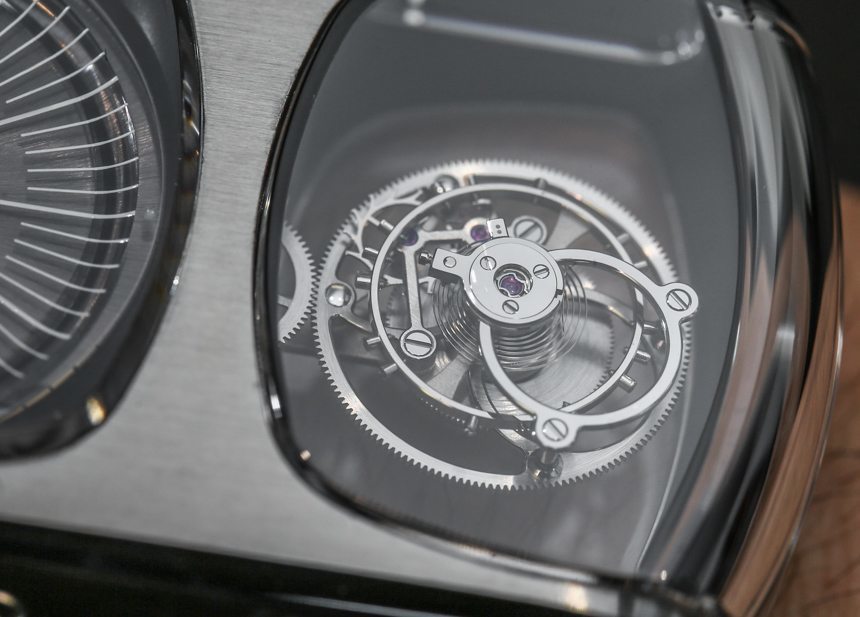 A hands-on look at the Angelus U10 Tourbillon Lumiere shows just how distinct and artful the Angelus brand is going to be. Even though the brand is produced by La Joux-Perret, the fuel behind the revival as well as the new designs is Mr. Sebastien Chaulmontet. Some of you might know him as the designer of Arnold & Son watches (which are also produced at the Swiss watch manufacture La Joux-Perret. In fact, when profiling Chaulmontet in an aBlogtoWatch “My First Grail Watch” article Sebastien perhaps hinted about the Angelus revival by exclaiming his love of vintage Angelus watches. He isn’t just a fan, but also a collector.

As a known collector of Angelus watches, people would often contact Sebastien directly, offering a timepiece or two for sale. As I recall the story, Sebastien said that one day a few years ago, someone called him sharing an offer to buy the rights to the entire brand. In collaboration with La Joux-Perret, Angelus was purchased, and it of course took a few years for everyone to decide what to do with it, and where to take the brand if they determined it was a good idea to revive the name. 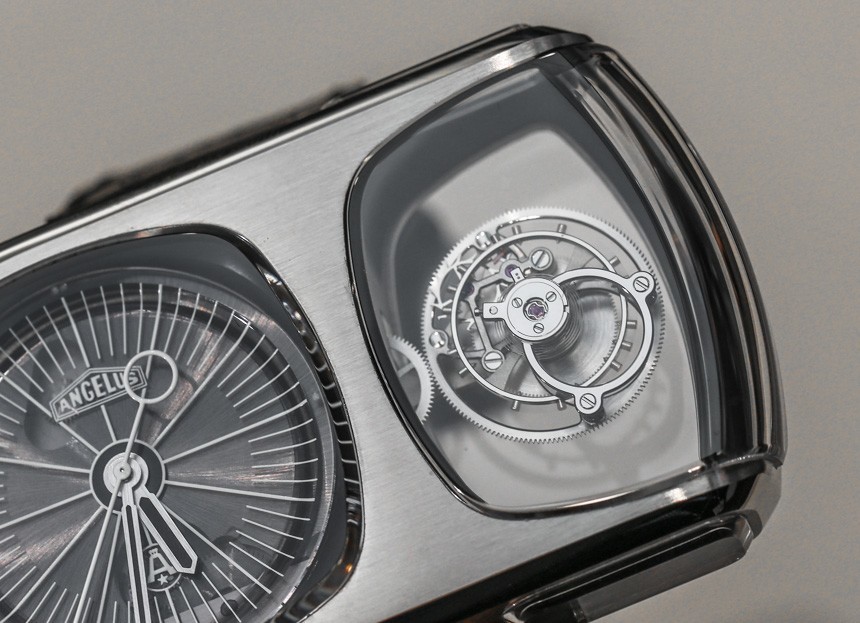 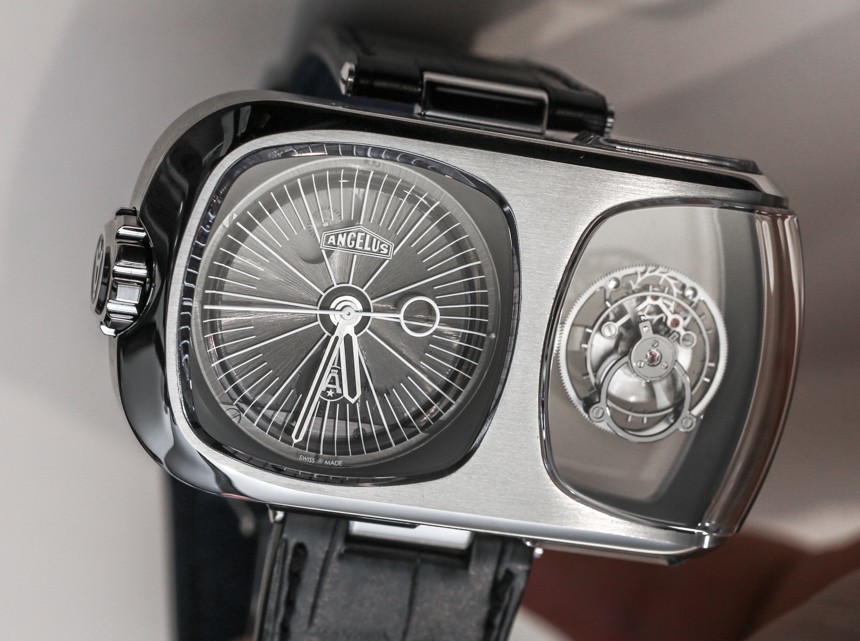 The design machine that Chaulmontet is, it didn’t take long before the “new face” of Angelus was born. The first new watch from the brand is the Angelus U10 Tourbillon Lumiere, but it doesn’t necessarily represent everything that Angelus is going to be about. If the Angelus U10 Tourbillon Lumiere, with its complex movement and design that looks like an electric shaving razor is not your thing – don’t worry. My understanding is that the Angelus designs will continue to evolve and show a lot of diversity. If anything, Angelus is Sebastien’s pet project, and I hope that the pieces which come out next continue to be very direct manifestations of his design dreams. 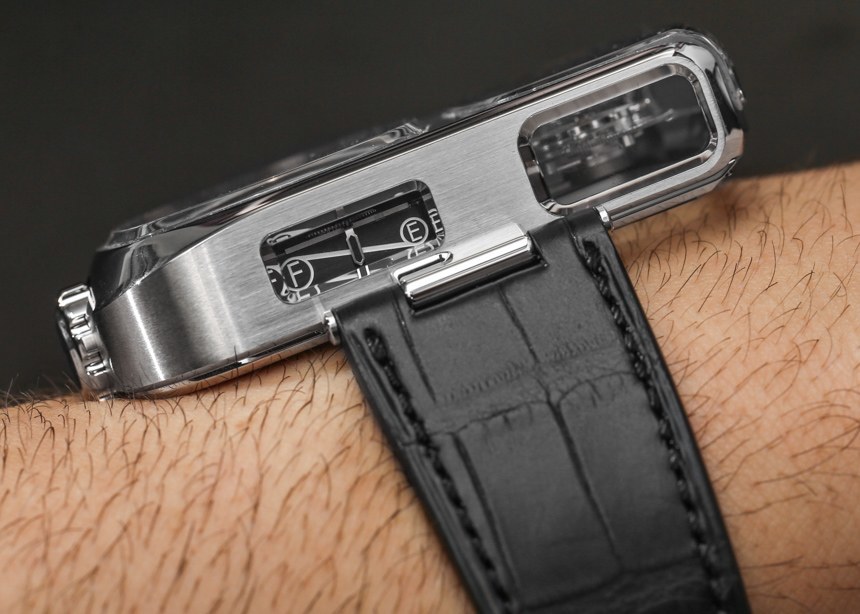 The Angelus U10 Tourbillon Lumiere might exist in a few additional versions, but at launch, it is limited to just 25 pieces… produced in steel (with some titanium parts). Sebastien was inspired by electronic appliances from the 1960s and 1970s – as well as, of course, clocks. For this year, the Angelus U10 Tourbillon Lumiere is fitted with a deadbeat seconds hand that ticks, even though the watch is powered by a mechanical movement. 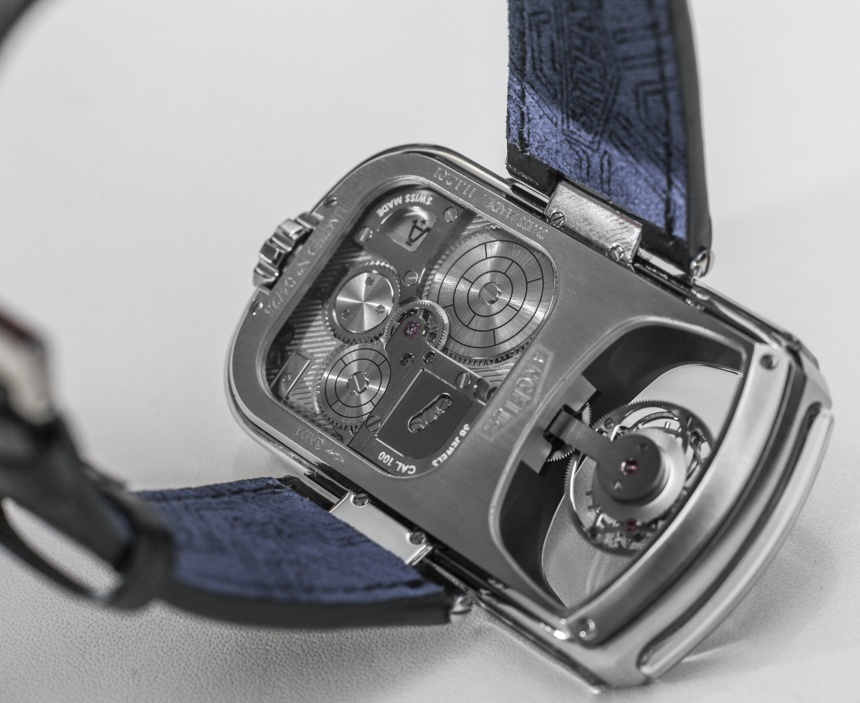 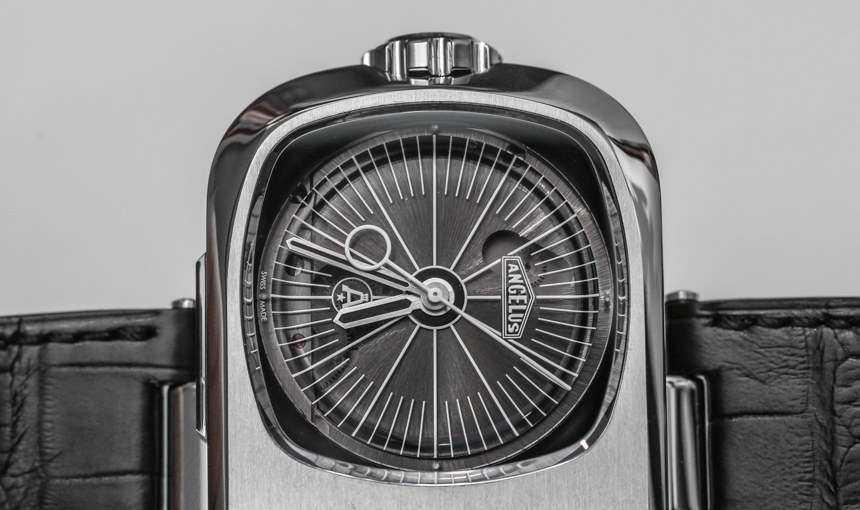 The most noteworthy element of the watch’s design is, of course, the case – which is very wide on the wrist… and, again, looks like an electric shaving razor. Even though the case is 62.75mm wide, it is just 38mm tall (and 15mm thick). This unusual set of dimensions can be difficult to imagine on your wrist, so I was glad to finally wear the Angelus U10 Tourbillon Lumiere and check it out for myself. It is for sure strange, but still very wearable. 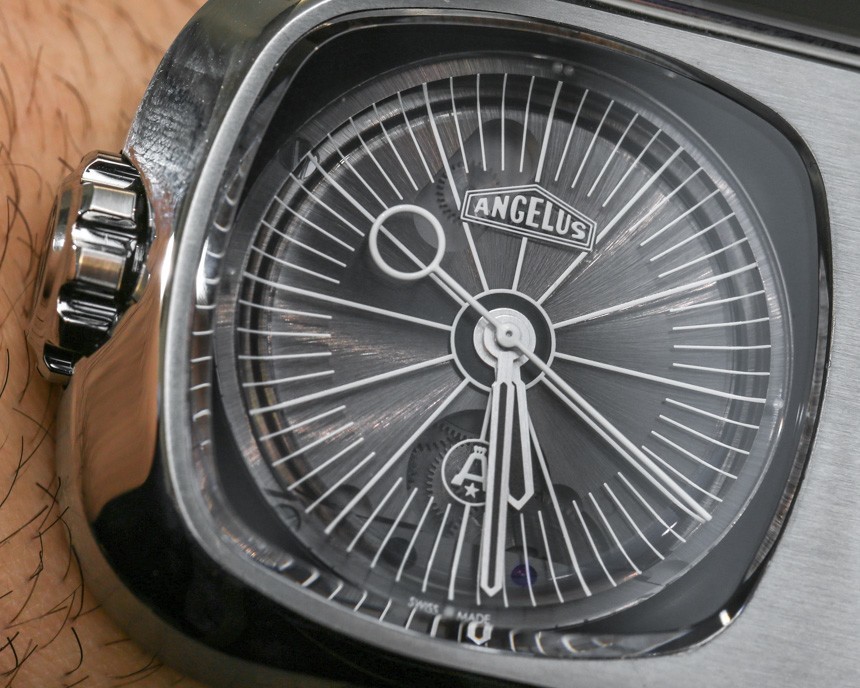 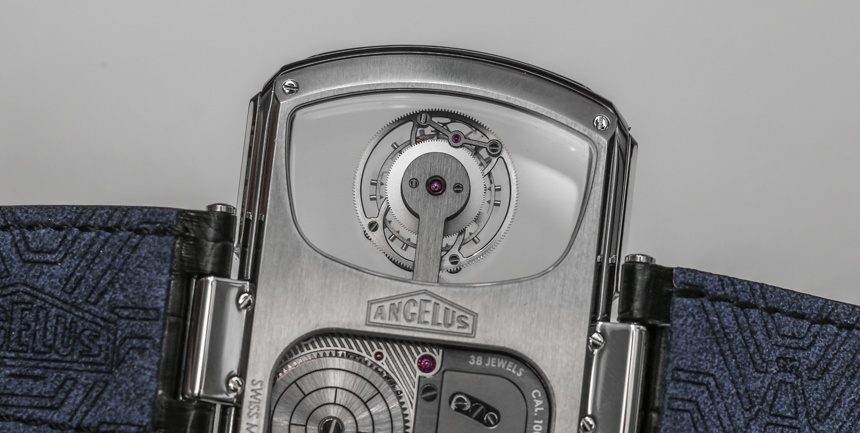 If you recall, Angelus decided to use steel, but not just any steel. I am not enough of an expert in steel alloys to remark on the specific properties of “BO-988” steel, but it is supposed to be more durable than traditional 316L steel which is more commonly used for the cases of steel watches. The case also has some PVD-coated black parts which, I believe, are on the inside of the case visible through some of the many sapphire crystals. 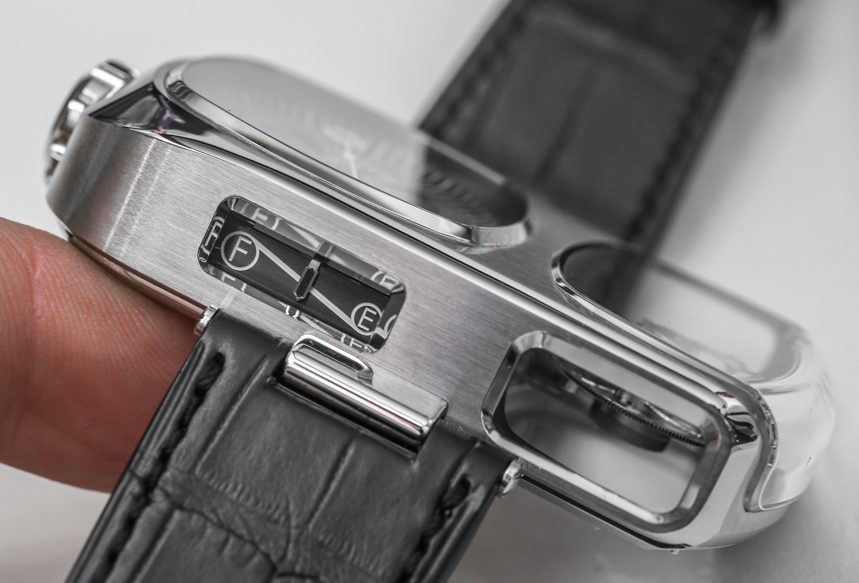 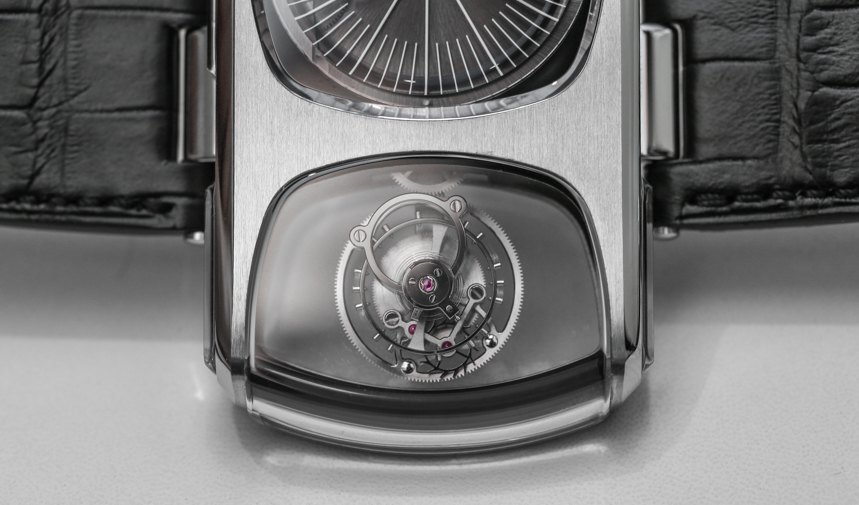 Sebastien helped create a very special movement which is designed precisely for the case. Or perhaps, alternatively, the case was developed especially for the movement. Called the Angelus calibre A100, this manually-wound mechanism features the time with deadbeat seconds, a power reserve indicator and a super-sized flying tourbillon which floats on a thin arm in the majority of the right-half of the case. This is the largest diameter tourbillon (16.25mm wide) produced by La Joux-Perret, and if there is any question whether or not this watch is quartz or mechanical based on the ticking seconds hand – the tourbillon ought to provide a final answer. 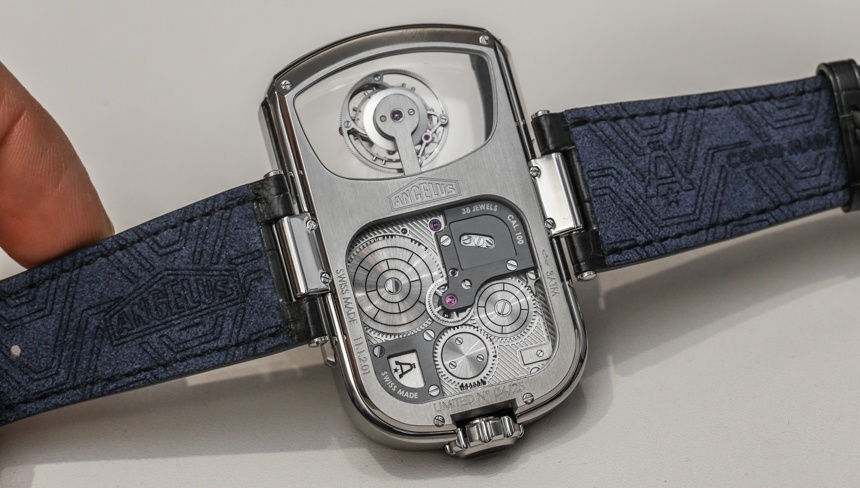 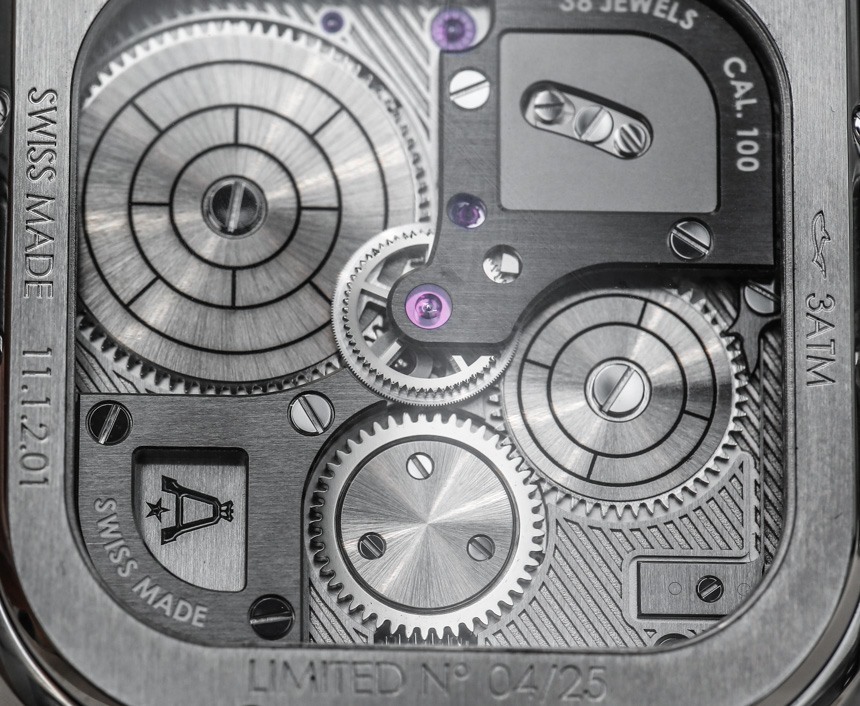 The movement has 90 hours of power reserve and operates at 18,000 bph (2.5Hz). I love how the movement features the power reserve indicator on the side of the case through a special window, and I also like the sober black, gray, and steel tones of the watch. This offers an artful personality that, while high-end, doesn’t have the typical brazen feel of “luxury” to it. Clearly, the Angelus U10 Tourbillon Lumiere watch is the result of love and passion by a dedicated designer. 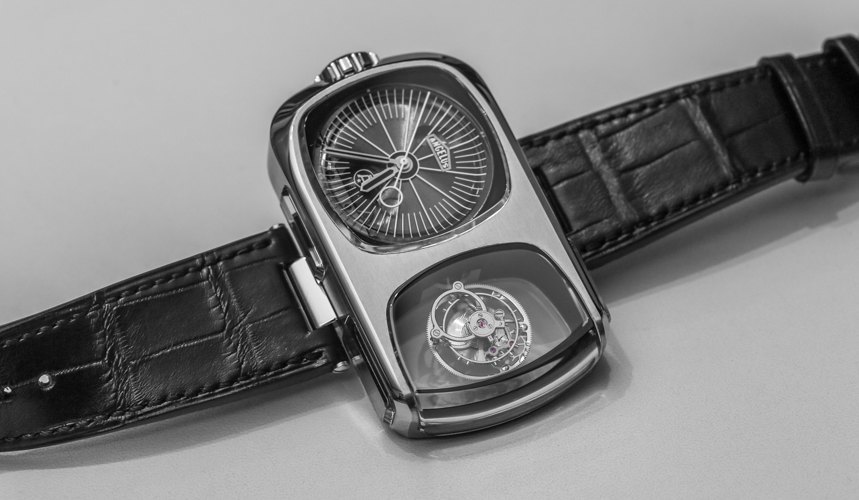 Given the eccentric design, it is not particularly surprising that the Angelus U10 Tourbillon Lumiere has a controversial appearance to it – but hey, why does everyone need to like it? In fact, only one man – Mr. Chaulmontet – needs to like it (and he most certainly does). This is a weird and wonderful creation that succeeds in being both unique and offering a fascinating glance into what the new Angelus brand is going to be about. I hope that it continues to be something that is very much driven by Sebastien’s design efforts and vision. Limited to just 25 pieces, the Angelus U10 Tourbillon Lumiere is priced at 100,000 Swiss Francs. angelus-watches.com