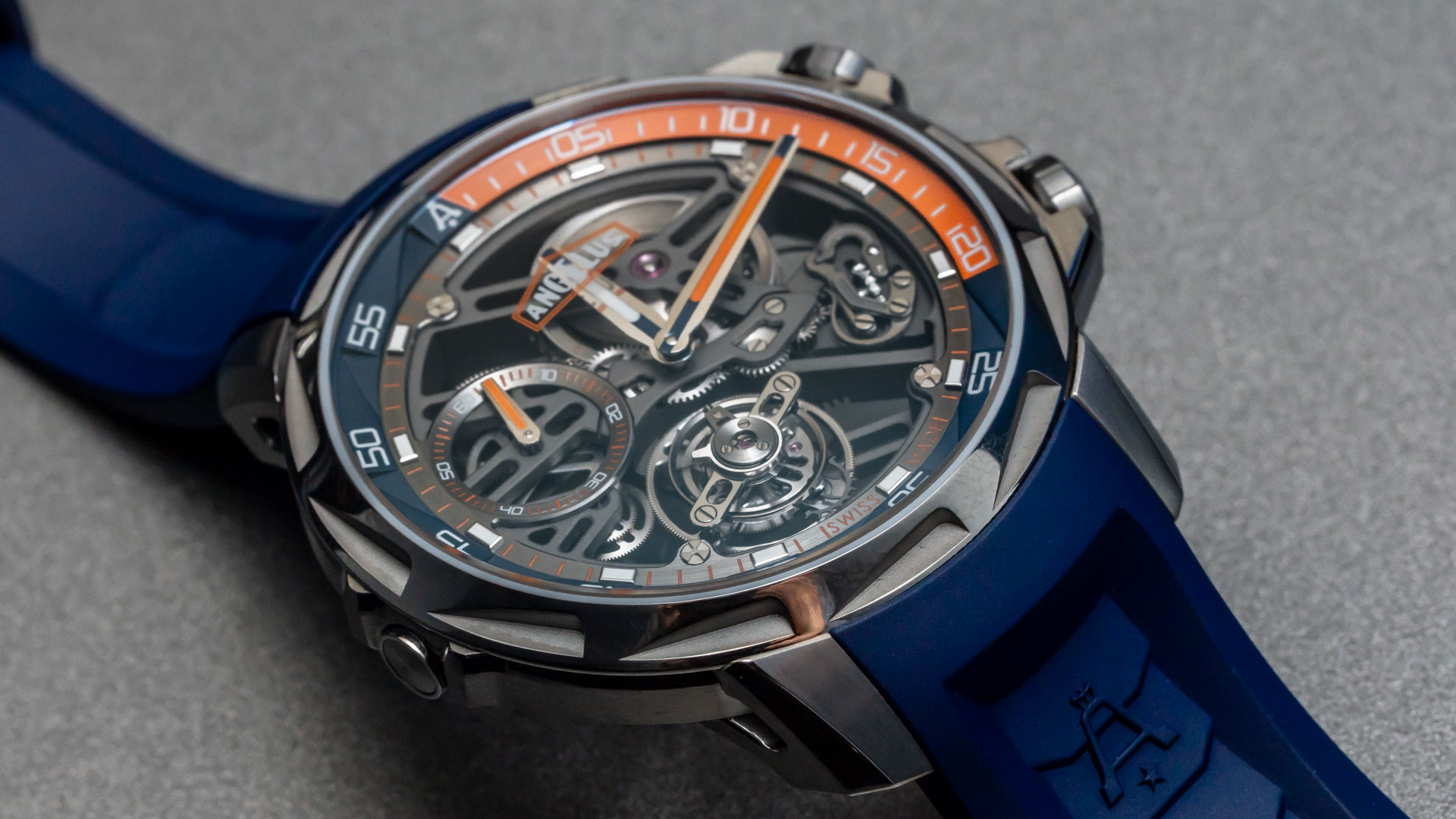 This Angelus U51 Tourbillon Diver (reference 0TDCT.E01A.K008D) wristwatch is 100% nerd-bait and should be appreciated as such. It is wild, weird, impractical, and a product entirely built for and by our modern watch collector generation. Angelus as a mark is a historic name in wristwatches, now owned by the Japanese Citizen Group. How did that happen exactly? The circumstances can be boiled down to the intense interests of La Joux-Perret’s former technical lead Sebastien Chaulmontet — who is now an innovation leader at the Swiss mechanical movement maker Sellita. 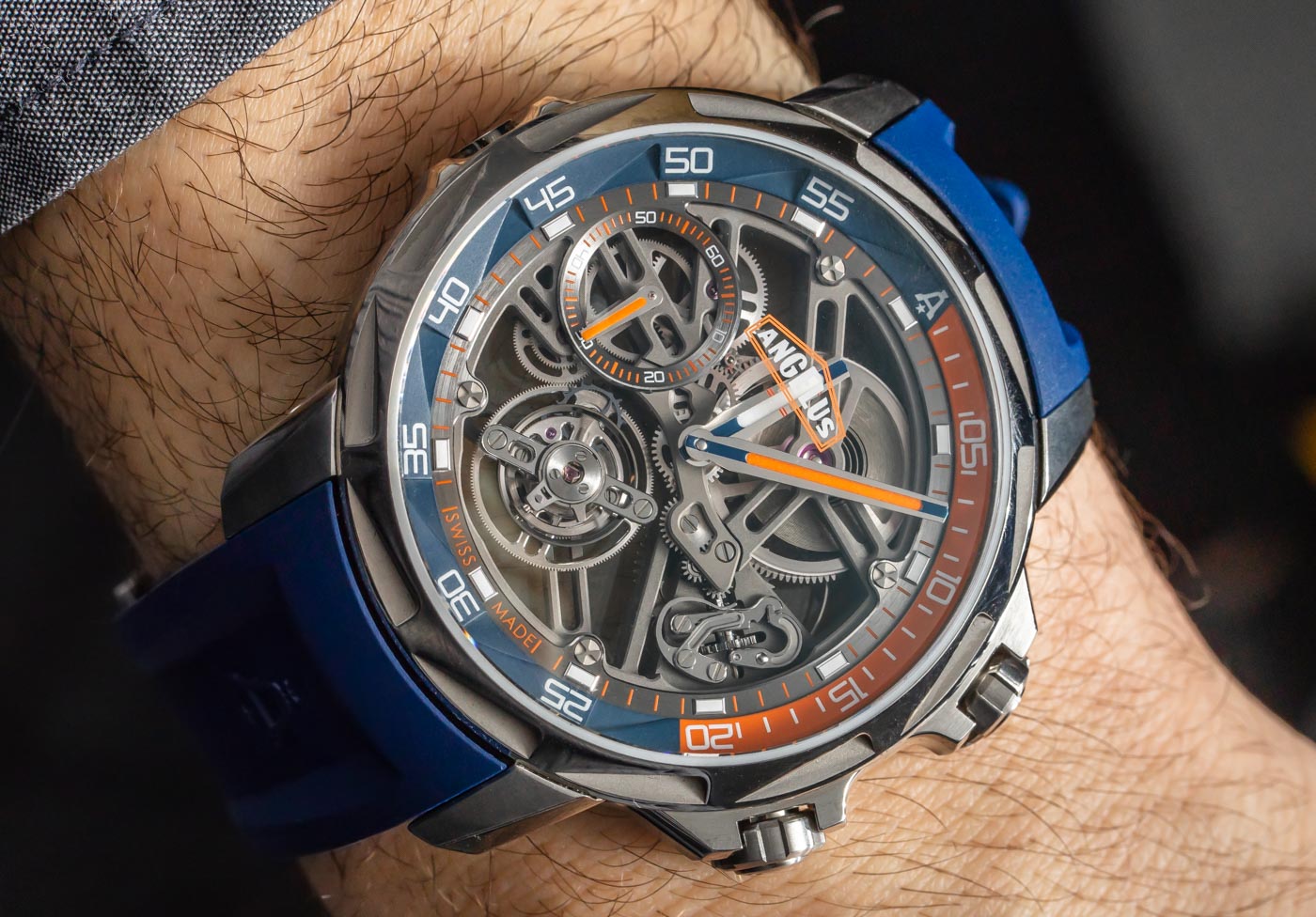 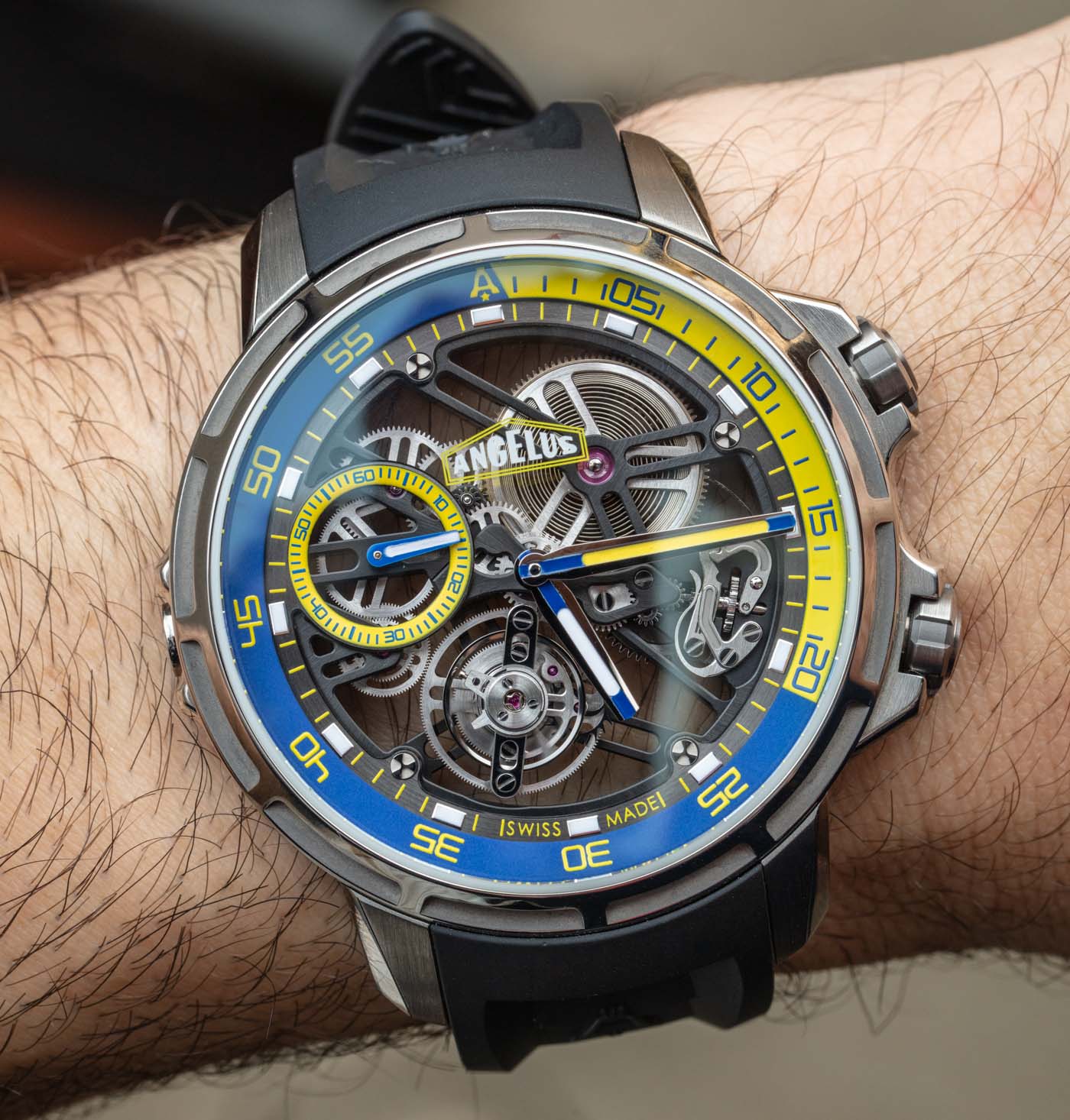 Chaulmontet’s work is most notable in many of his Arnold & Son watch and movement designs. What made him special as a designer is his tripartite interest in overall watch design, watch movement engineering, and watch collecting. Chaulmontet developed an interest in historic Angelus watches and even wrote a book about chronographs that featured many of them. By chance, he was offered the opportunity to purchase the Angelus brand name (though the brand was no longer producing watches). He managed to get La Joux-Perret to purchase it with the intention that Angelus would come back as a high-end, modern design equivalent to Arnold & Son’s more traditional aesthetic look. It was only later that the Citizen Group stepped in to purchase La Joux-Perret and its assets, including Angelus. 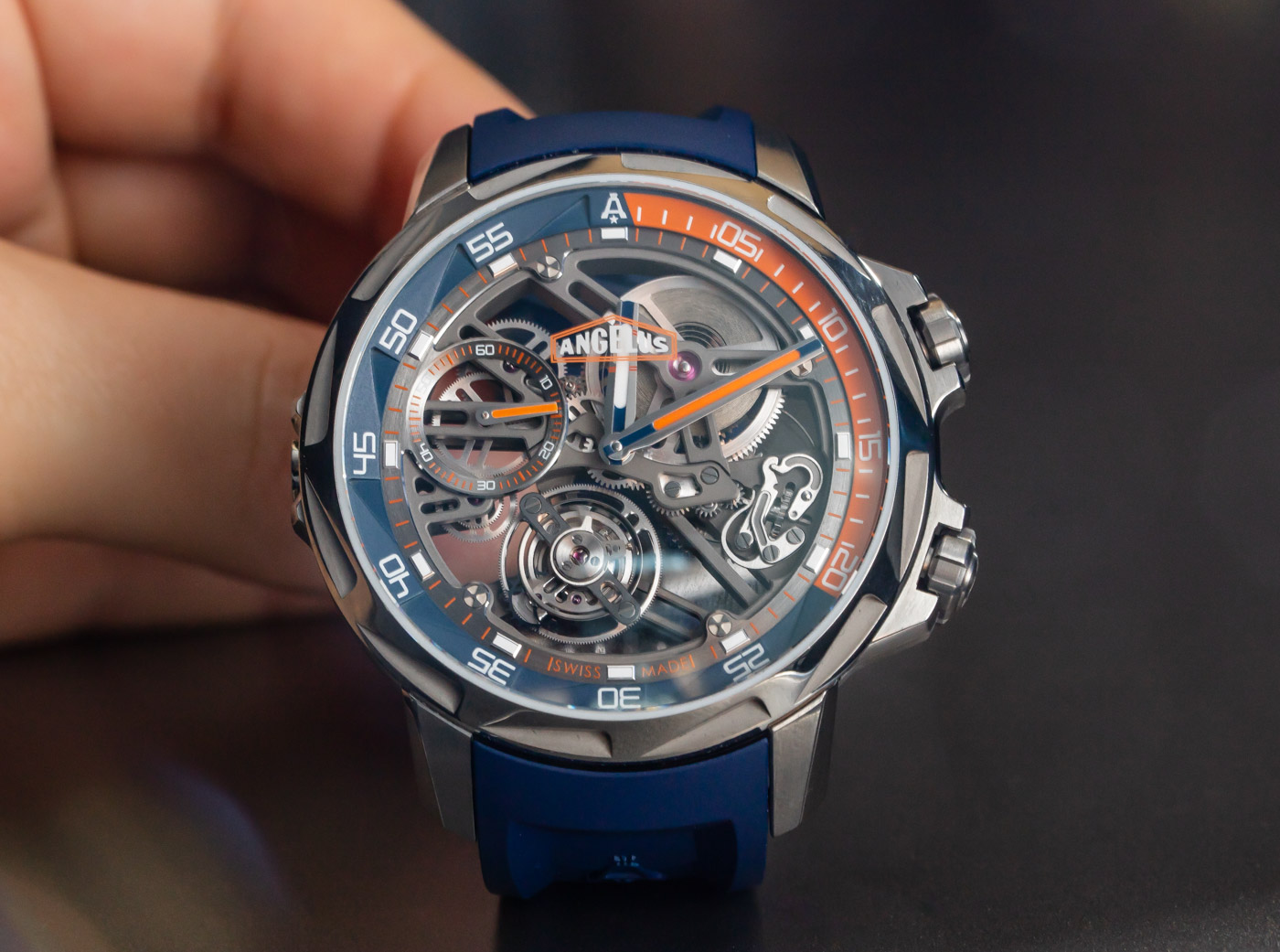 Angelus, as a name, came back under Chaulmontet’s vision, and it certainly didn’t disappoint. The first modern Angelus watch was the U10 Tourbillon, which reminds most people of a classic electric shaving razor you can wear on the wrist and is easily one of the most distinctive luxury watches on the planet. For the U51 Tourbillon Diver, Angelus’ goal was just that: to make a wildly elaborate 300-meter diving watch that contains a tourbillon. No, this isn’t the first tourbillon dive watch in the world (that strange trend began at least 10 years ago), but it is one of the only ones that have a satisfying artistic excuse for having been developed in the first place. According to Angelus, the principle creative forces behind the U51 watch are their Design & Graphics Manager Mr. Matteo Mercan, and their Head of Development & Production David Serra. 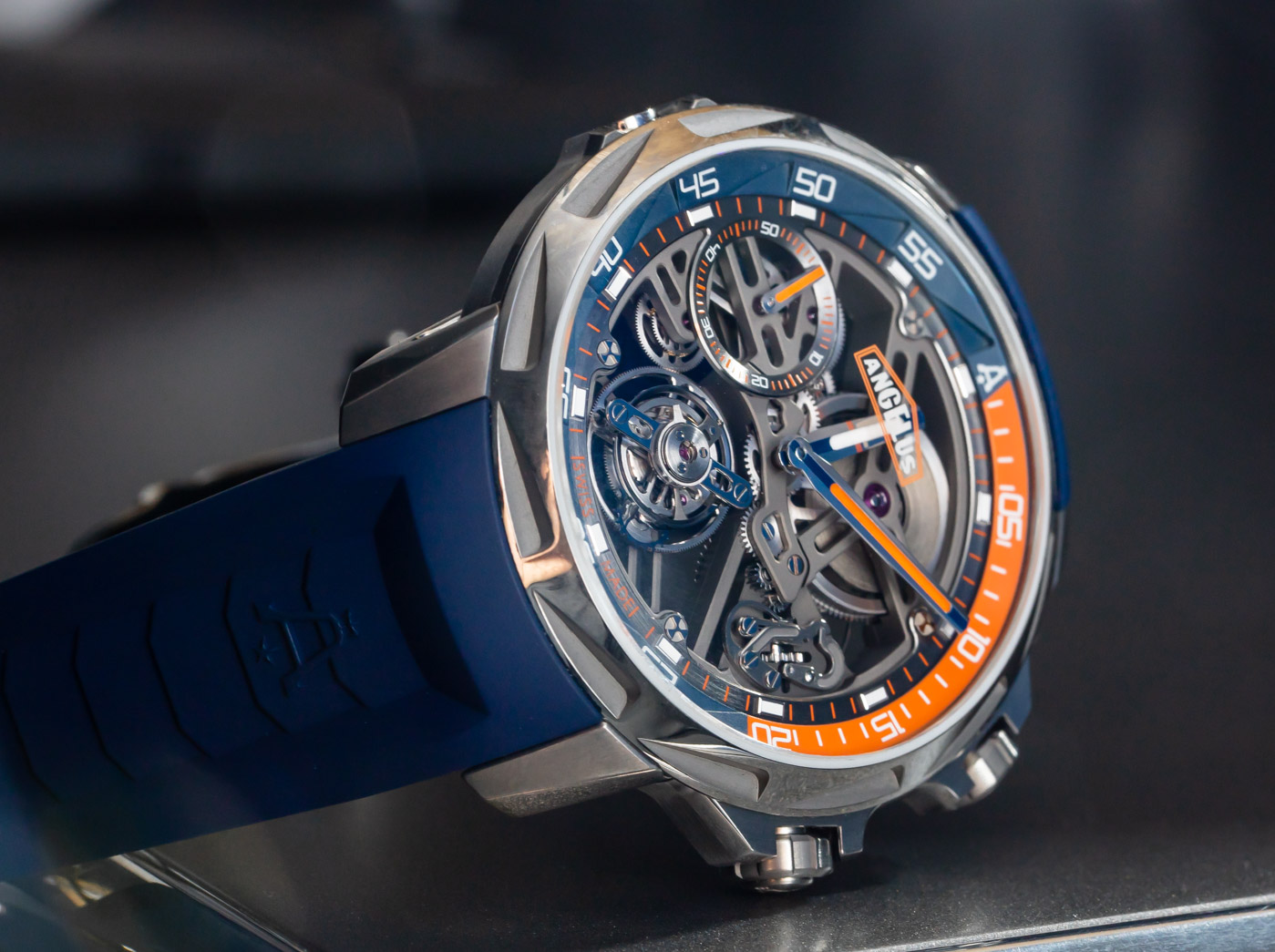 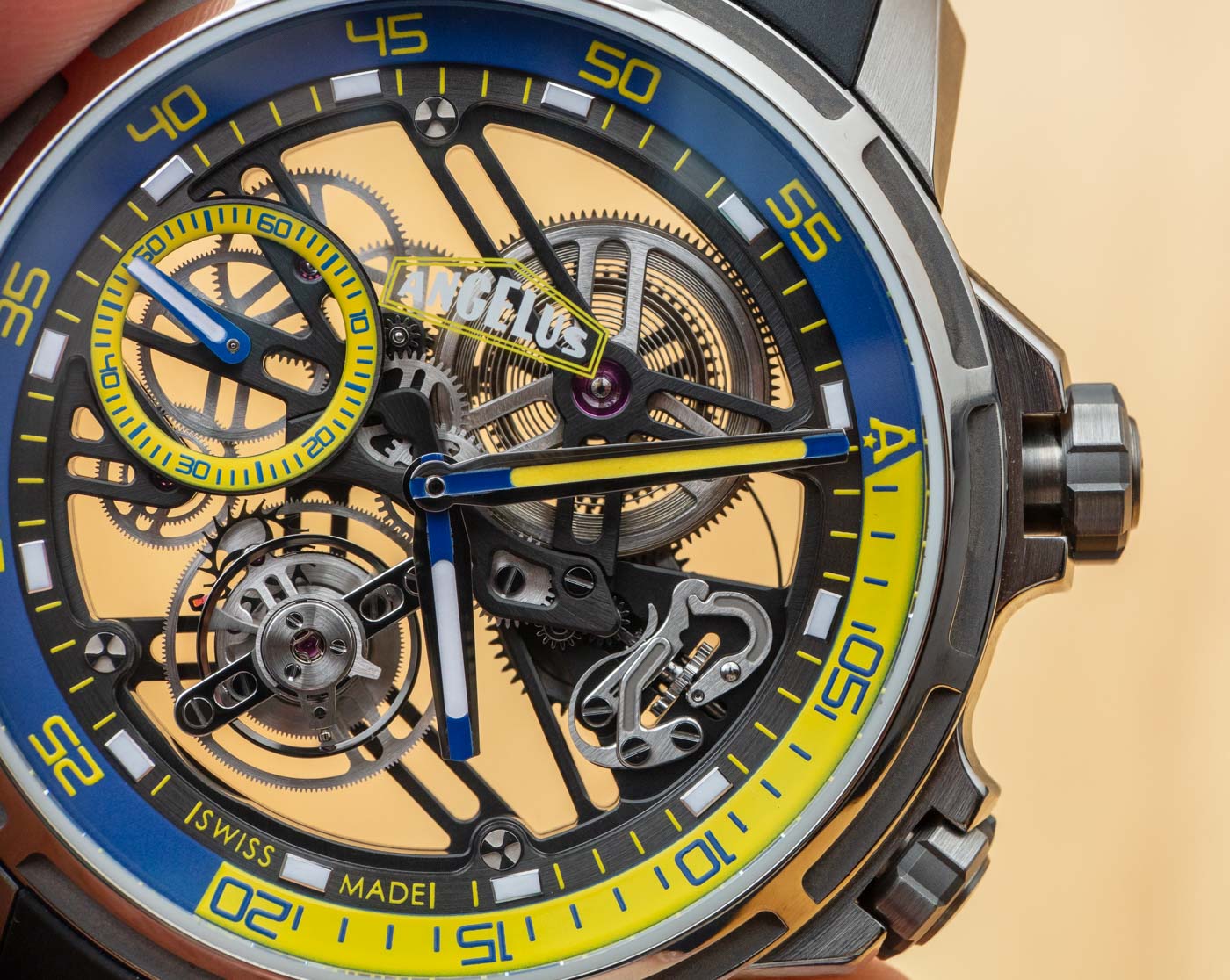 Not only is the U51 a diver’s watch tourbillon, but it also sports a highly skeletonized manually wound movement and a hell of an interesting case. What I think all collectors can appreciate about this rare wristwatch is the sheer level of effort that went into coming up with this original creation. It doesn’t just have a unique-looking case but one in sharply-machined titanium that celebrates the fantasy utility this wrist machine was imagined up for. It is almost better that Angelus doesn’t explain for what purpose this product was mean to be used. That way each person who sees it can defer to their own imaginations. 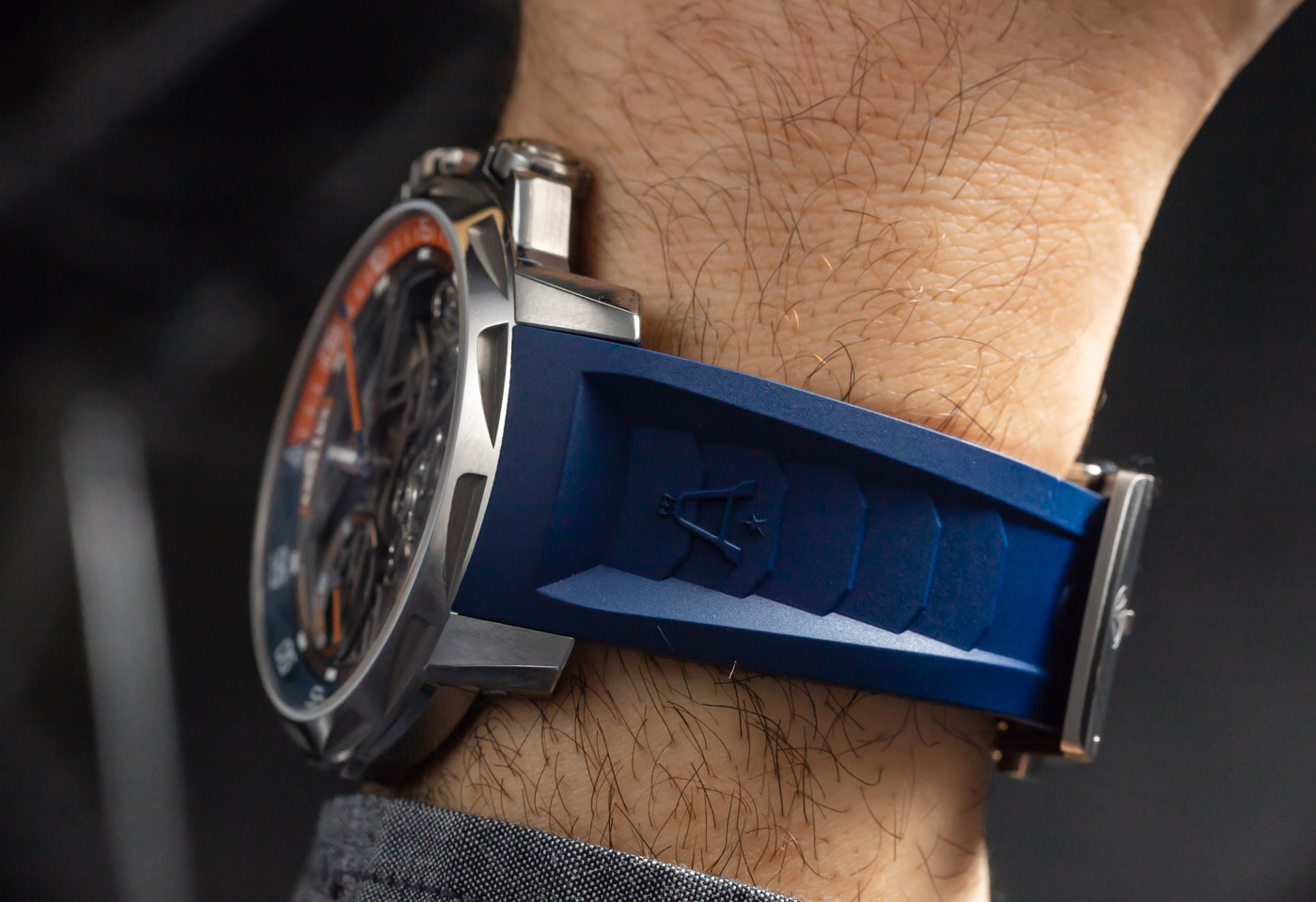 As I mentioned above, the Angelus U51 Tourbillon Diver was designed by real watch nerds and collectors. That means that, at the least, the watch needs to be comfortable and wearable — and it is. In days past, something like the Angelus U51 (in theme) would not only have been much more expensive but also often unwearable, ergonomically speaking. The 45mm-wide grade 5 titanium case is surprisingly svelte-feeling (~12.5mm-thick) on the wrist and also wraps snugly around your arm. With the fitted rubber strap, this relatively lightweight and wrist-hugging timepiece is a pleasure to have on, though the wearer will be burdened with having to explain their choice of wristwatch to many an onlooker. 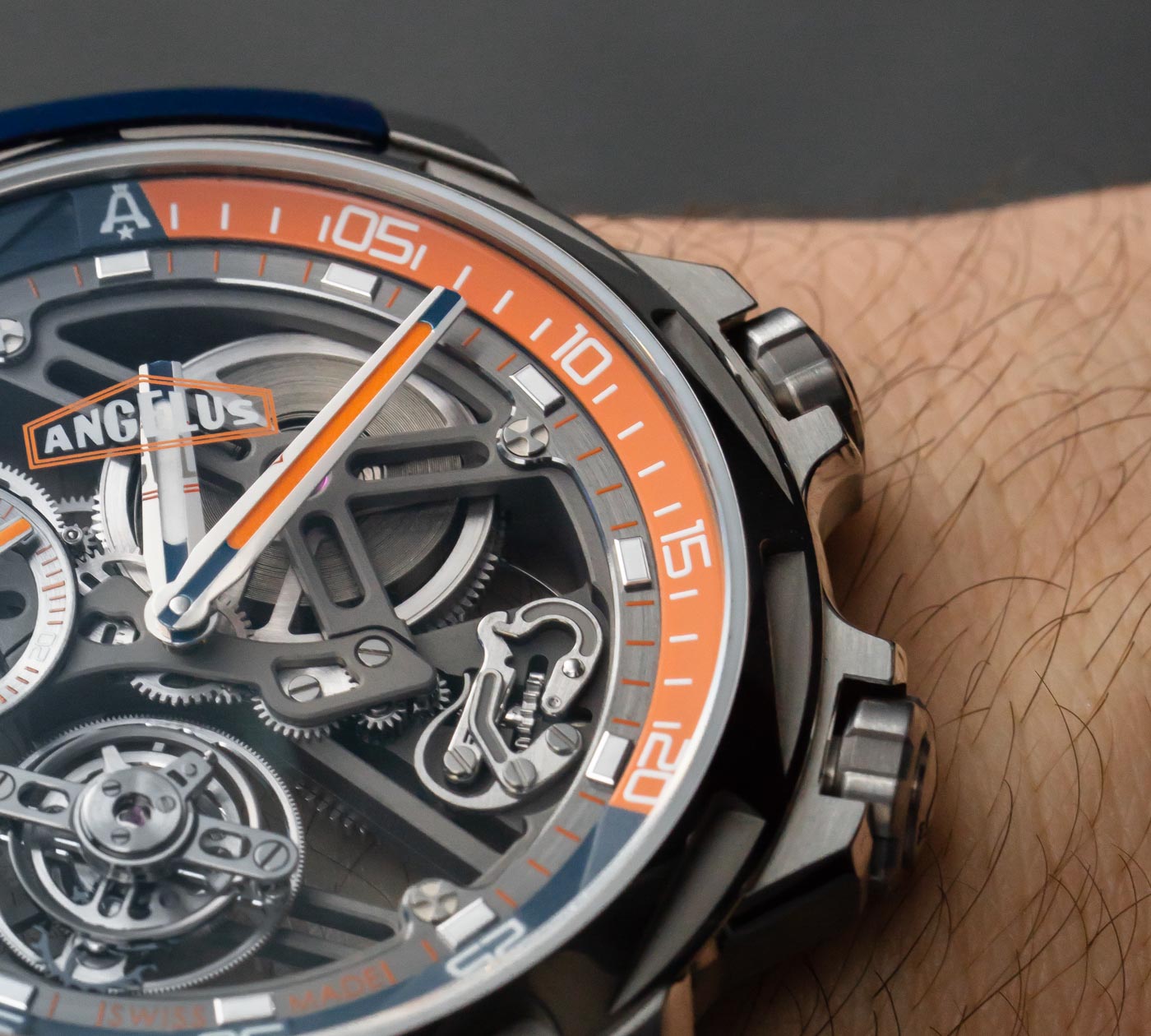 The case has two crowns, one used for the inner rotating timing bezel, and the other to operate the movement. The inner rotating bezel works nicely and has a smooth action to each distinct click. The movement itself is, by necessity, pivoted to the side in order to accommodate this crown layout. The dial thus becomes asymmetrical with the tourbillon window being skewed to the left, as opposed to being in the center. At times, I look at the dial wanting more symmetry, but I know Angelus intentionally wanted the dial to be skewed like that, so I respect it. I also like how the dial elements are well-balanced, offering a skeletonized movement view that doesn’t have distracting empty sections. But speaking of empty sections, the cut-away view of the mainspring barrel does operate as a crude power-reserve indicator (by seeing how tightly wound the mainspring is). 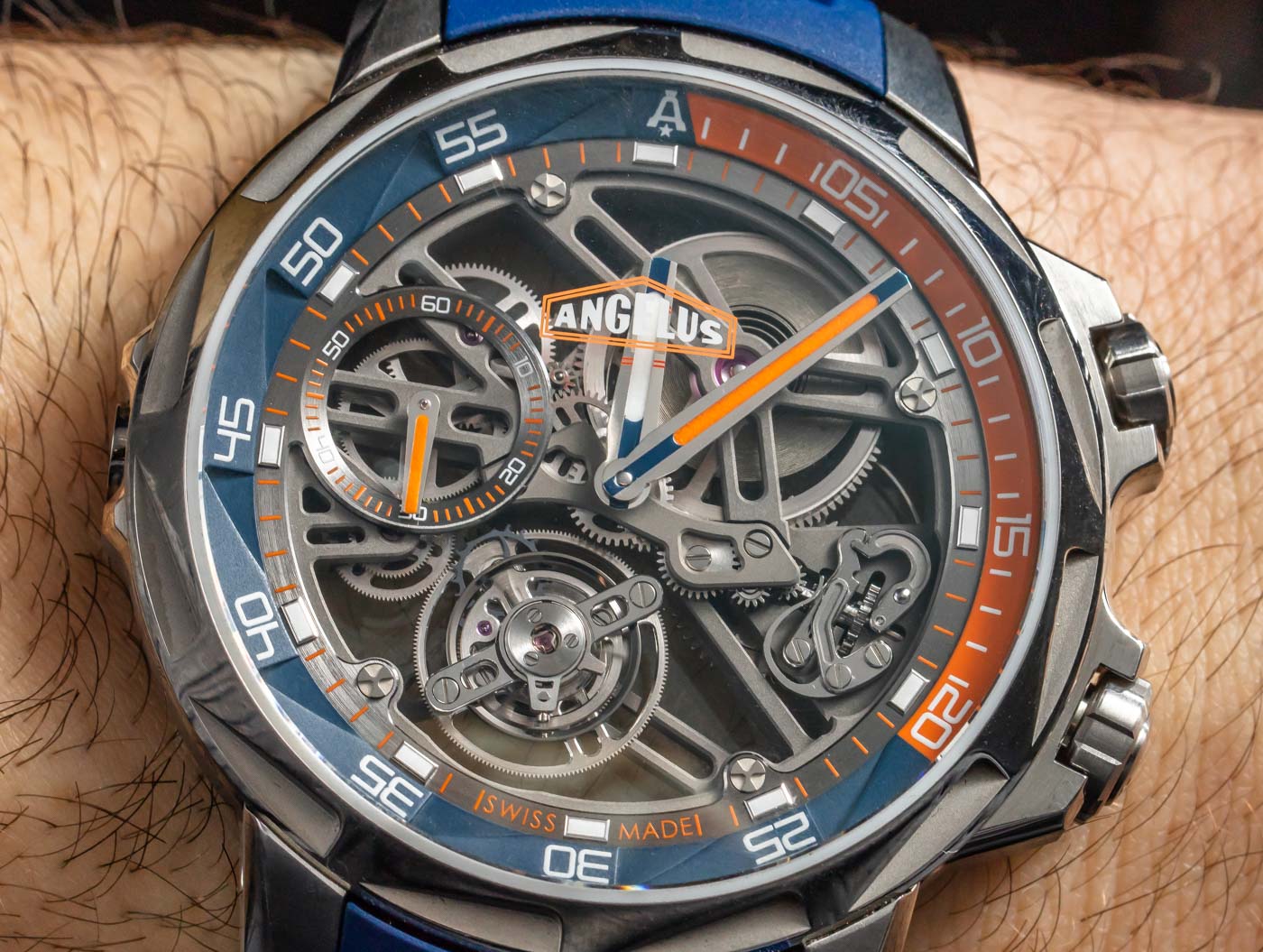 If I could make any change to the U51 Tourbillon Diver, it would be to help promote the visibility of the hour and minute hands a bit more. As a skeletonized watch that also has a number of things going on over the dial, legibility is already under attack. Add the various overlapping colors and surface textures, and the dial can be a challenge to read at a glance. Legibility is a real issue in sport watches but a minor issue in the desirability of the U51 Tourbillon Diver. The watch is so interesting, so limited, and with such a good story for fellow watch collectors, I really can’t see the dial as being a reason this watch wouldn’t be fully celebrated by the community. It does, however, mean that Angelus has some ability to tweak the design for future versions, even though the product’s creator is no longer at the company. 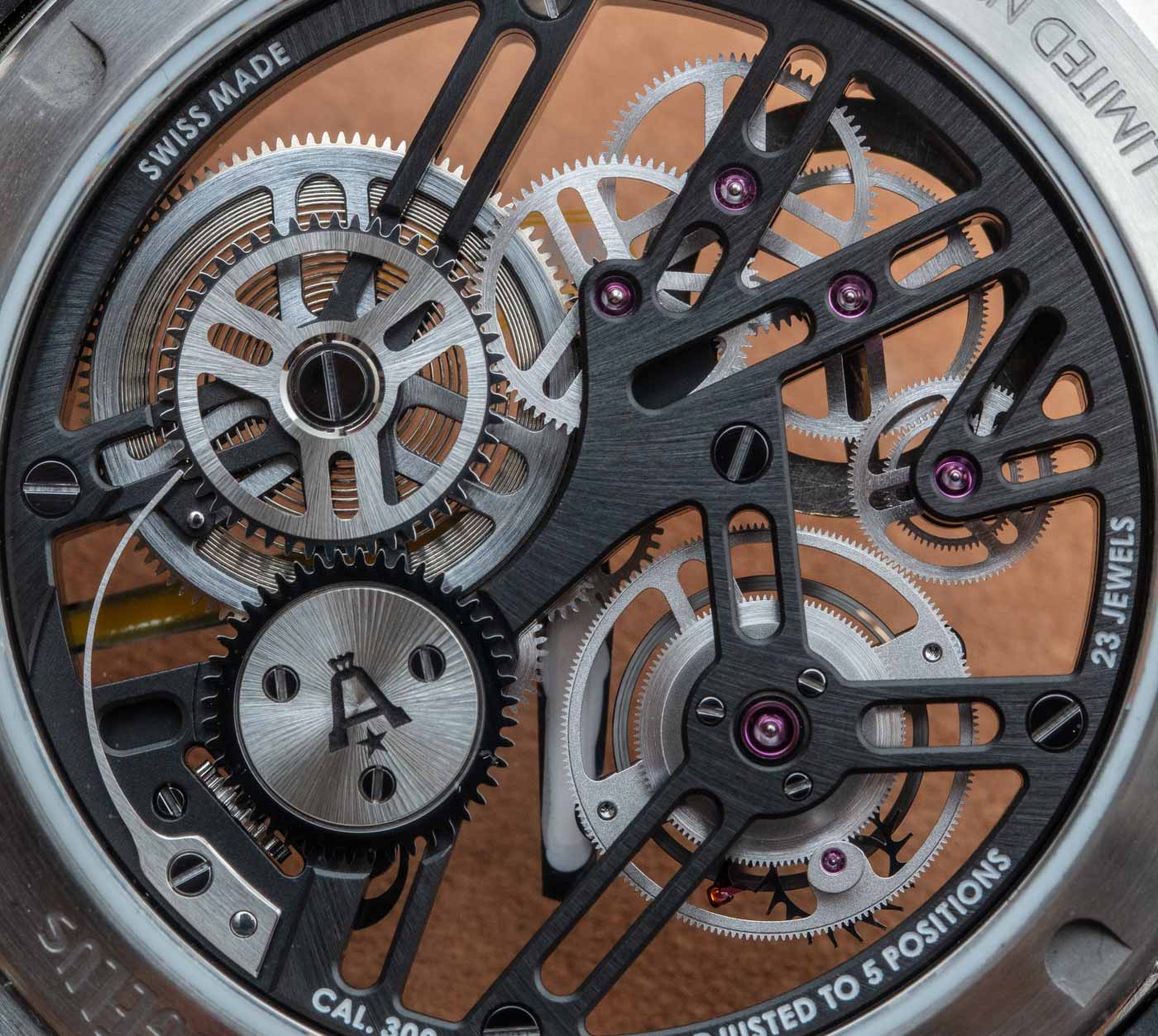 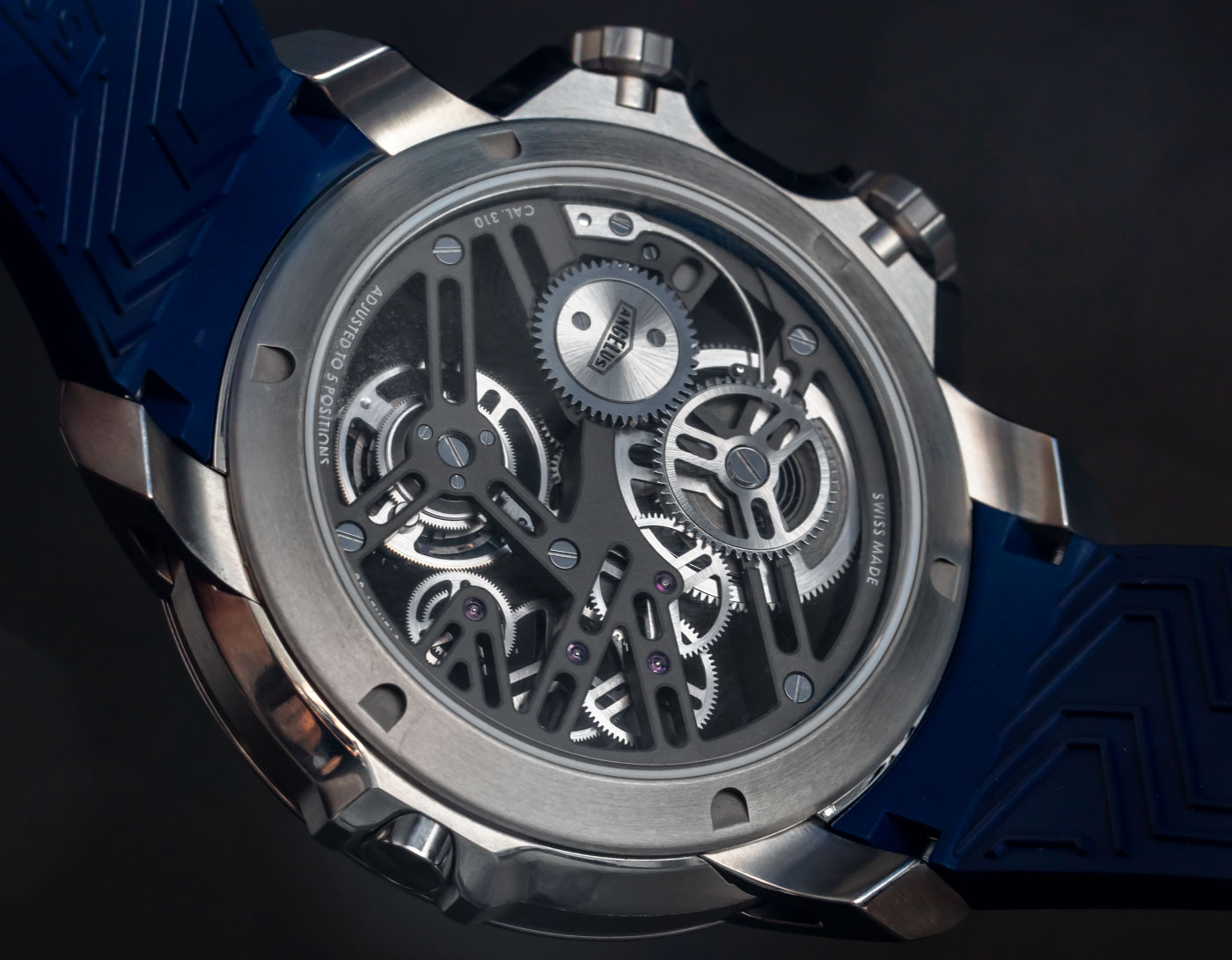 Also produced in-house, the Angelus U51 Tourbillon Diver includes the skeletonized and manually wound A-310 caliber movement that operates at 4Hz with a decent power reserve of 5 days (120 hours). What also makes it interesting is that it has both a traditional subsidiary seconds dial and the seconds indication via the tourbillon window. The movement is otherwise designed to be practical and slim, as well as to be skeletonized. Important features include silicon in the regulation system for added dependability and a ball-bearing-mounted tourbillon cage for added durability. As a haute horology item, there is certainly hand-finishing but this isn’t an A. Lange & Sohne movement. It does, however, represent something open-minded and inspired that we rarely see from the great conservative brands. 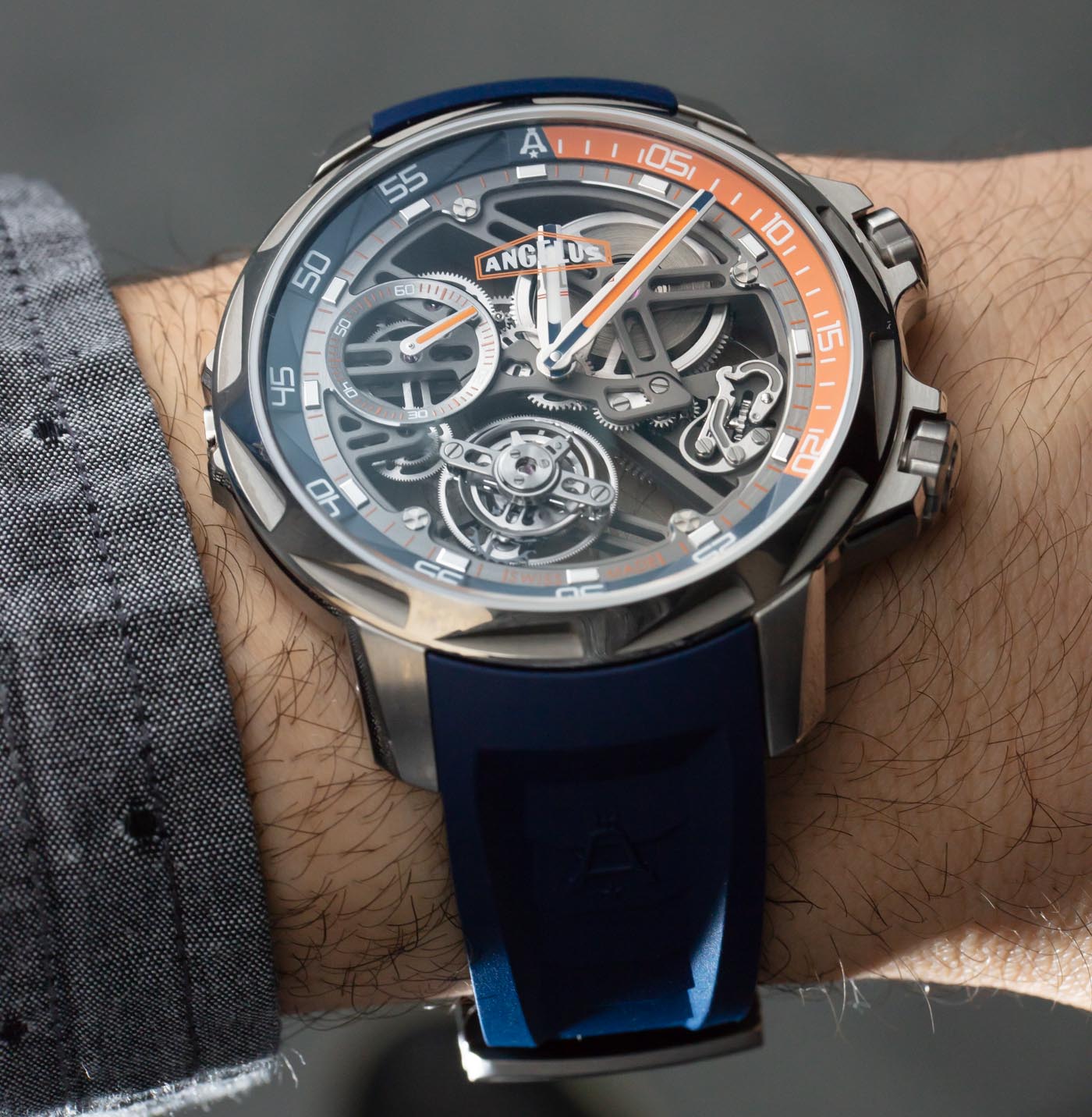 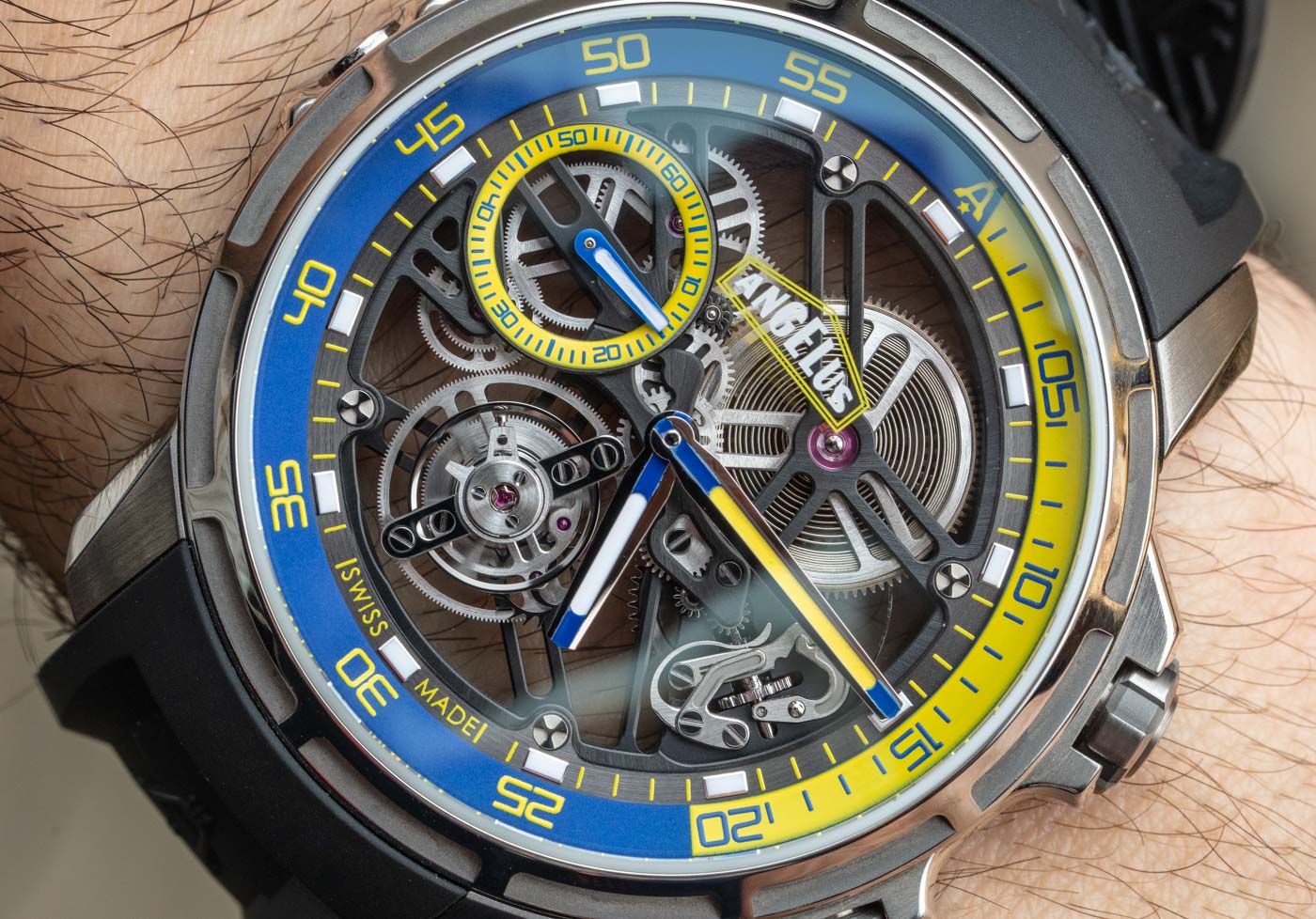 The Angelus U51 case deserves to be featured in more models, and I am sure that Angelus will slowly play with different variations of the U51 Tourbillon Diver outside of this toy-like blue and orange model or the blue and yellow model (with a slightly different bezel that came before it). It makes for an excellent enojy to the collection because the bright and sporty colors exemplify the sport watch theme Angelus is going for. Tool watch devotees will no doubt find issue with the U51 Tourbillon Diver, even though it does satisfy its water resistance requirements. People should, instead, put Angelus in the same category as MB&F or Urwerk, as wearable “horological artwork.” The Angelus U51 Tourbillon Diver might veer closer to traditional timepiece than exotic art object in sheer aesthetics, but it nevertheless has an emotionally compelling story that will help it earn the future cult-status it deserves. Limited to just 25 pieces in this blue and orange color execution (a few others versions have been made thus far, including blue and yellow, as well as all-black), the Angelus U51 Tourbillon Diver reference 0TDCT.E01A.K008D has a retail price of 32,800 Swiss Francs. See more at the Angelus website here.

Necessary Data
>Brand: Angelus
>Model: U51 Tourbillon Diver reference 0TDCT.E01A.K008D
>Price: 32,800 Swiss Francs
>Size: 45mm-wide, 12.47mm-thick.
>When reviewer would personally wear it: Easily comfortable enough to wear as a daily timepiece, and almost practical enough, as well. Best as a playful show-off watch around those in the timepiece-know.
>Friend we’d recommend it to first: Experienced watch collector who knows the value of mechanics and doesn’t want to overspend while being comfortable sporting niche/boutique luxury Swiss watch brands.
>Best characteristic of watch: Incredible execution of modern horology by a collector for other watch collectors. Case design and manufacturing is impressive and overall slim package for a 300mm water resistant diver’s watch with two sapphire crystals.
>Worst characteristic of watch: Dial legibility is limited by its own design. Movement skewed at angle to accommodate double crowns has some aesthetic disadvantages. Movement does not have a power-reserve indicator.