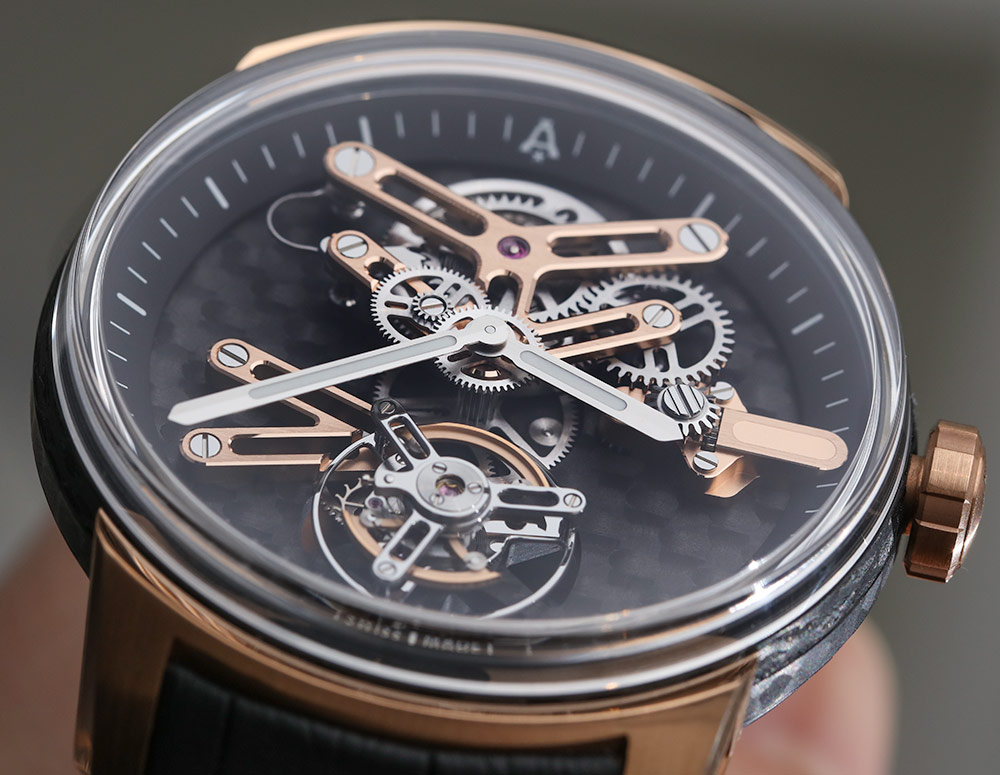 I recently realized that I have been attracted to just about every watch Angelus has released since 2015, when the revitalized brand reintroduced itself with a totally new identity. Now under La Joux-Perret (owned by Citizen), Angelus has emerged as the more modern, flirting-with-futurism sibling of Arnold & Son. Announced at Baselworld 2017 came this pair: the Angelus U21 and U22 Tourbillon watches, which combine the brand’s aesthetic of totally viewable movements along with a full carbon fiber main plate rather than the sapphire main plate you might be familiar with from the U20 skeletonized tourbillon here. It makes for an overall lighter watch that foregoes the “see through” dial that might start to feel a little played out by the brand for a sportier and darker carbon fiber.

The result is a mixed bag of a very cool looking watch that misses the mark with its case back and a carbon fiber pattern that will look “splotchy” to some. One thing I’m very happy about is the pricing (compared to the $70,000 U20 with the U21 at around $50k and the U22 at around $38k) but also a desire for something new that’s not a tourbillon. Perhaps even a true “affordable” non-tourbillon, though production cost factors might keep that from being a reality at the moment. Maybe I’m just a little tourbi-over it right now (sorry). Before I get into the differences between these two models, we’ll start with what the Angelus U21 Tourbillon and U22 tourbillon have in common. Obviously, the movement is the same with both models powered by the Angelus A-250 Caliber which operates at 3Hz and has a 90-hour power reserve. Everything is hand chamfered and polished, and though some of the movement on the U22 blends into the carbon fiber main plate (a little too much for my taste) the intention of showing off the wonderfully minimal movement succeeds here. Where things go wrong, however, is the case back. Where the U20 (especially the fully see-through model) had a case back that was as fascinating to admire as the dial, these models fall flat. The challenge of making the carbon fiber main plate succeed on the dial and case back isn’t lost on me, but the case back just looks like an asymmetrical and random assortment of movement bits and text. It just doesn’t work, but fortunately the part of the watch you’ll spend more time admiring makes up for this. The “box” style domed sapphire and lug shape add to the crisp look of the case which is 42mm wide and a slim 10.3mm thick. The U21 is done in red gold and NPT carbon fiber and is obviously the costlier of the two models. I have to say that I’m much more taken with the U22, which is lighter not just in price but weight as well. Done in titanium and NPT carbon fiber, the case weighs a meager 54 grams. I think titanium just fits the aesthetic and style of Angelus better than gold, and the touches of red add that dash of sportiness and youth to the piece. When I think about carbon fiber, my mind doesn’t naturally think about gold as being the ideal companion. The U22 has red lumed hands as well as the Angelus logo at 4 o’clock on the dial, which I actually like. I could do without the “Cal. 250” text right under it, though. The U21 alternatively has the Angelus logo at 12 o’clock and abstains from any red font or mention of the movement, altogether. Legibility is often sacrificed for design, especially in more avant-garde watches, but the decision to use the red lumed hands on the U22 and the white lumed hands (which are a light blue when illuminated, we’ll try and get a shot of that for you guys) on the U21 make for dials where you can easily actually read the time. One thing that has been bugging me every time I give the carbon fiber main plate a close-up view is that the pattern sometimes looks a little…smudgy. I’m not sure if that’s the most accurate word for what I’m describing and while I believe it is uniform throughout, with different lighting and position it can seem a little splotchy looking. Honestly, this combined with the lackluster case back, I find myself a little less in lust with this watch as time goes on. Not without their flaws, I still admire the Angelus U21 and U22 tourbillon watches. They are far from my favorite offerings from the brand, in fact, they might be closer to the bottom of that list. I’m bored of tourbillons and the execution of the case back and carbon fiber pattern is less than ideal, but I am glad that we are seeing Angelus watches coming in at lower price points. The Angelus U21 Tourbillon and U22 Tourbillon watches are each limited to 18 pieces and priced at $52,200 and $37,995, respectively. angelus-watches.com