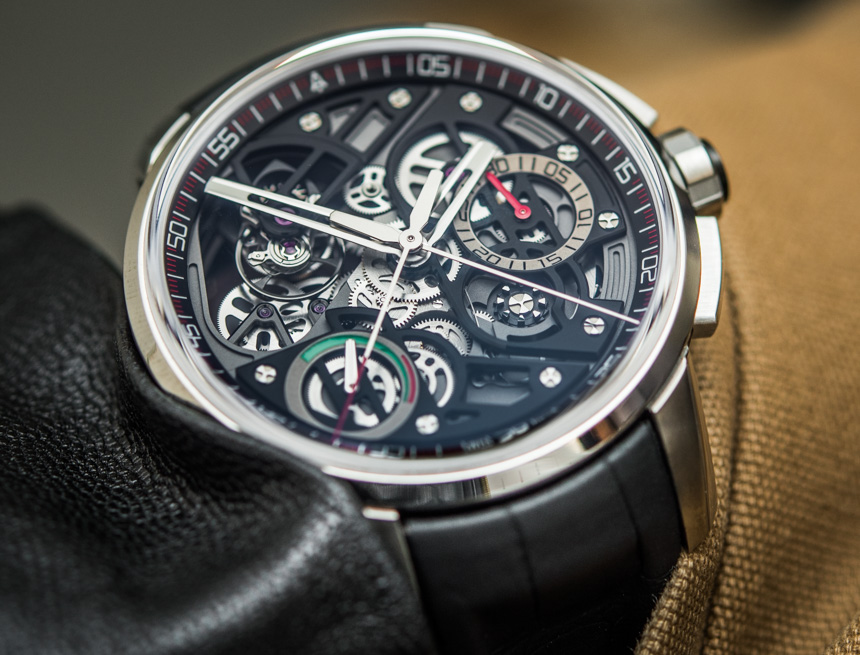 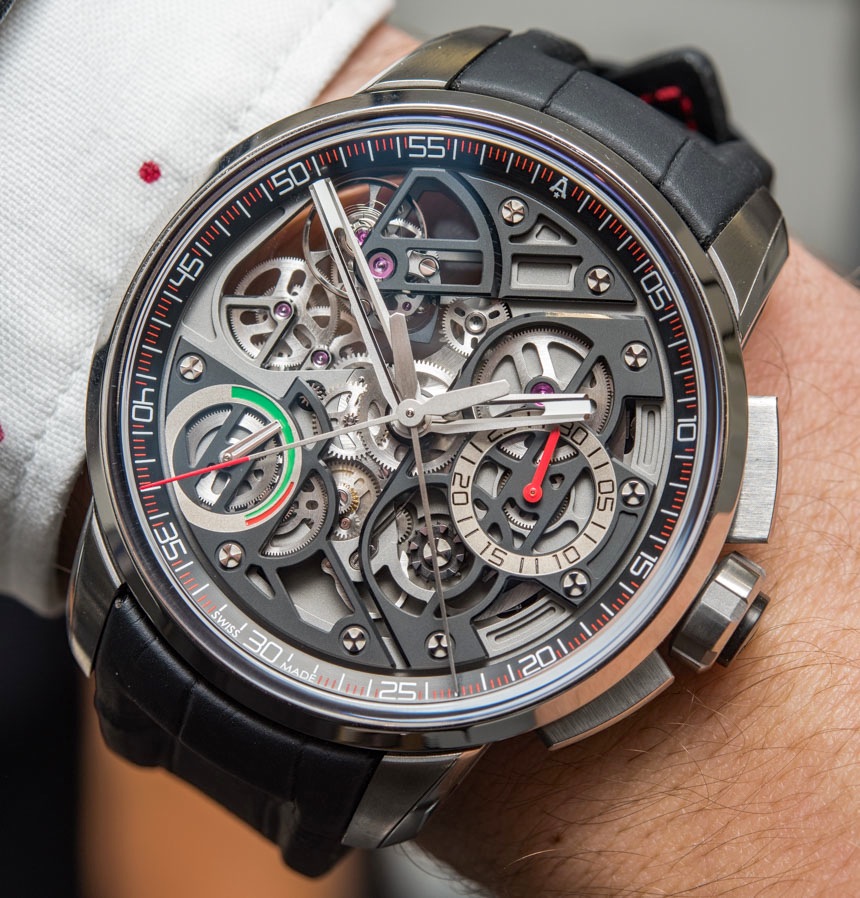 When I said I was looking forward to seeing the Angelus U30 Tourbillon Rattrapante hands-on, I meant it. I first covered this watch a couple of weeks ago in the typical pre-Basel watch release frenzy – but even at that time, the Angelus U30 Tourbillon Rattrapante stood out as something so complicated, perhaps simply just aspirational, that I had to take its promised functionalities and complexities with a grain of salt until I had seen them work in the real world. 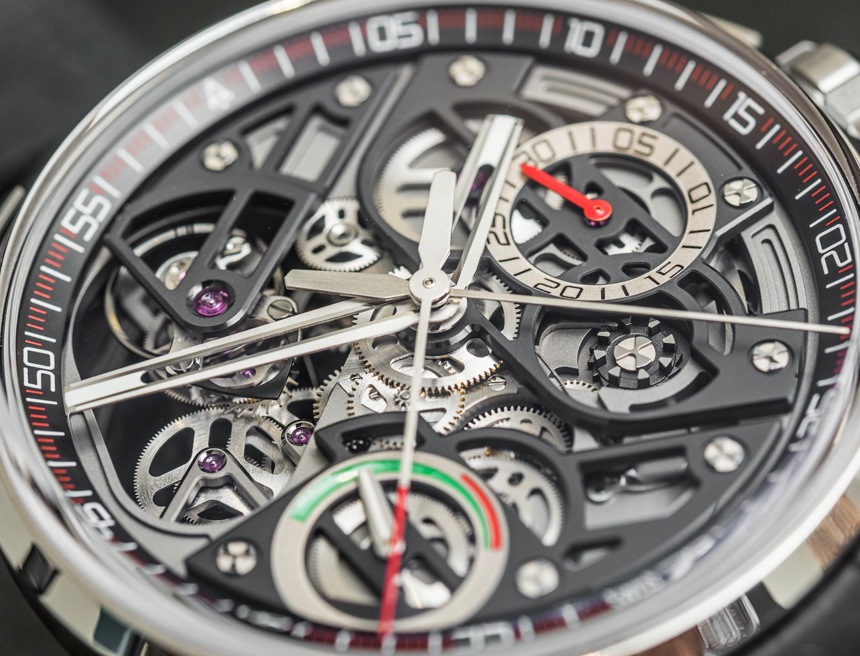 Speaking for myself, when I get to handle a watch as complicated as a tourbillon split-seconds chronograph wrist watch – not that it happens often – my first vision and expectation is one of an exploding movement that entertains with hundreds of delicately crafted watch parts rattling inside a case crafted from sapphire and other fancy materials. A drop of sweat might have rolled down my face when I first lifted the Angelus U30 Tourbillon Rattrapante from its tray – as I sneaked by Sebastien and Lisa, some of the wonderful people behind the brand who, by the way, were still presenting Arnold & Son’s (a sister brand) novelties to us. 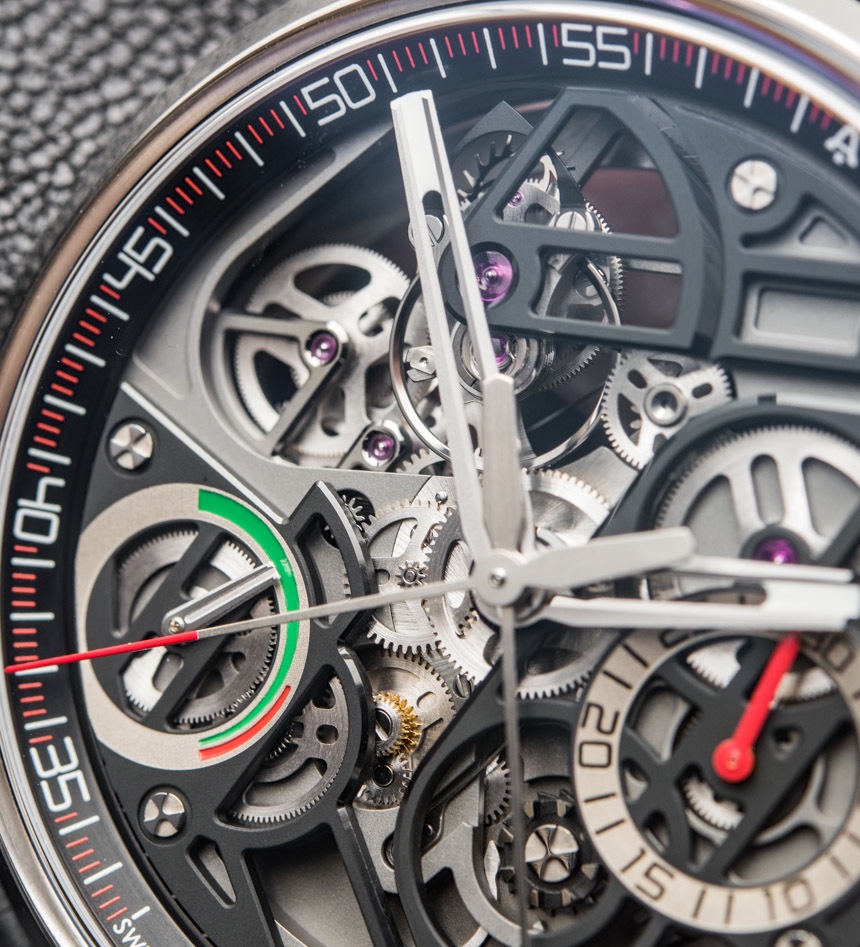 I lifted the cover off the watch tray to find all of the new Angelus pieces underneath it; and immediately reached for the Angelus U30 Tourbillon Rattrapante, decidedly skipping the arguably more flashy-looking U20 Ultra-Skeleton Sapphire Tourbillon. I first checked to see if the 37.60 millimeter-wide and 9.35 millimeter-thick, all-new, fully integrated and in-house-manufactured movement was ticking. That confirmed, and after winding it just a little bit more to make sure there is no shortage of torque, I committed to pushing the chronograph starter pusher… 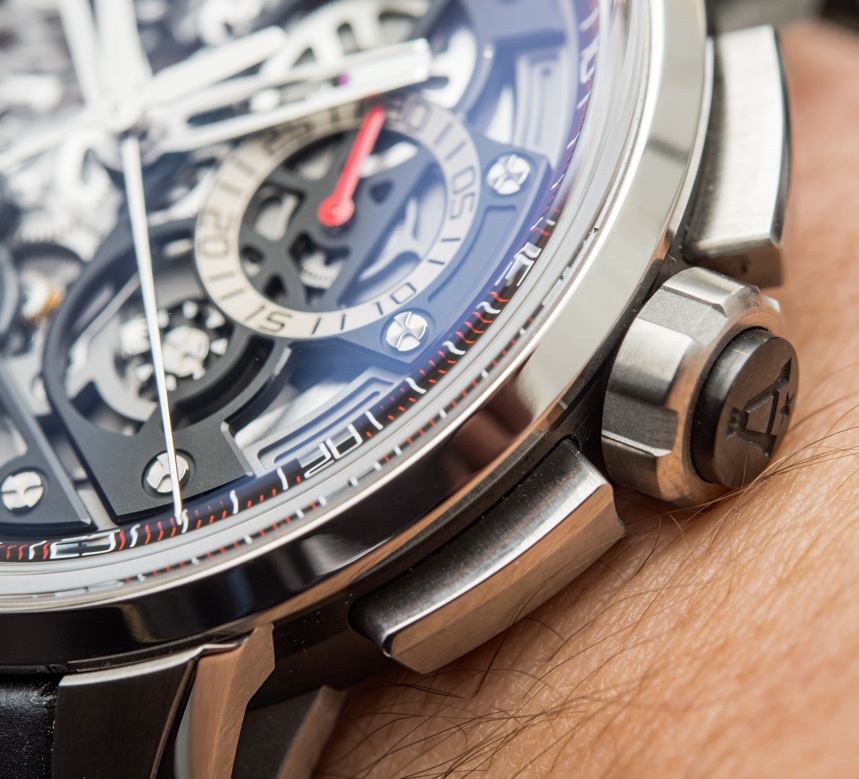 …and, lo and behold, no explosions, no rattling, no mechanical equivalent of “ouch!” coming from the movement or the pusher. Instead, the two overlapping chronograph central seconds hands started gliding over the dial, just as one would expect from a bog-standard chronograph.

Next level mechanical insanity with the Angelus U30 Tourbillon Double Chronograph Flyback. It's a rattrapante chronograph capable of measuring two split times *and* a flyback which means you can reset without stopping — and can "save" your split time and just reset the other timer. There's a tourbillon in there as well? Price is about $59,000. @angelus_watches @abtw_david #ablogtowatch #angelus #angeluswatch #baselworld #lajouxperret #lgg3

In the video above, I test all the chronograph functions of the Angelus U30 Tourbillon Rattrapante: this includes the normal start-stop-reset sequence that every single chronograph must be capable of doing, as well as two, rarely linked additions. By pressing the pusher set inside the crown, the two central seconds hands can be separated (referred to as a rattrapante, split-second, or double chronograph function), recording one split time by stopping the lower one and letting the top continue. 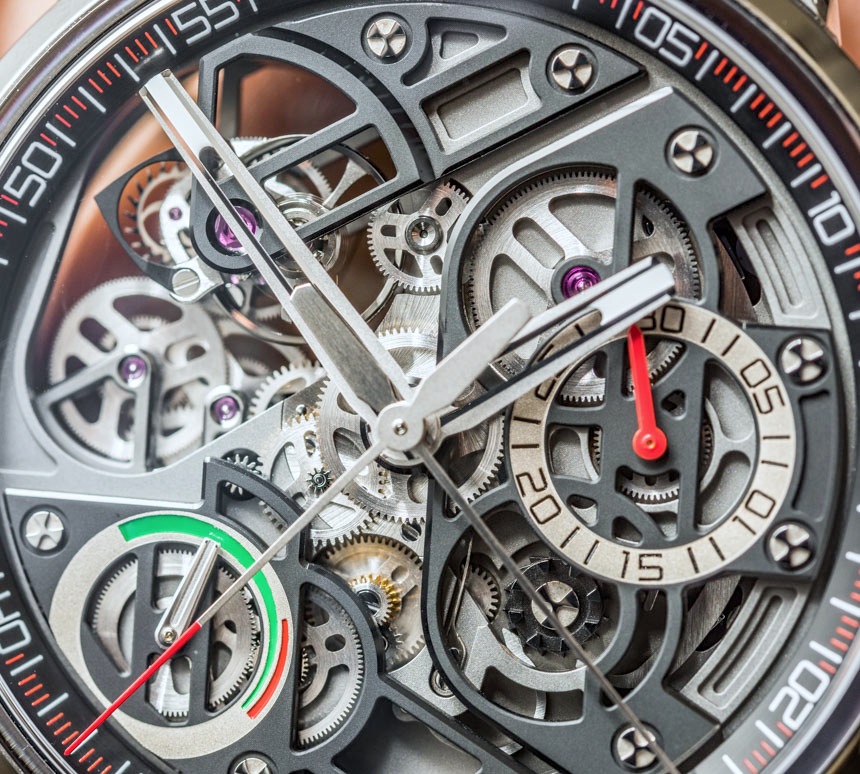 Then, and this is the bit that really makes this chronograph stand out from the rest, there is a flyback function added on top of all this, allowing you to stop, reset, and restart the top seconds hand all at a press of the lower chronograph pusher. At this time, the lower seconds hand, the one that was stopped through the crown’s pusher, remains where it was stopped. 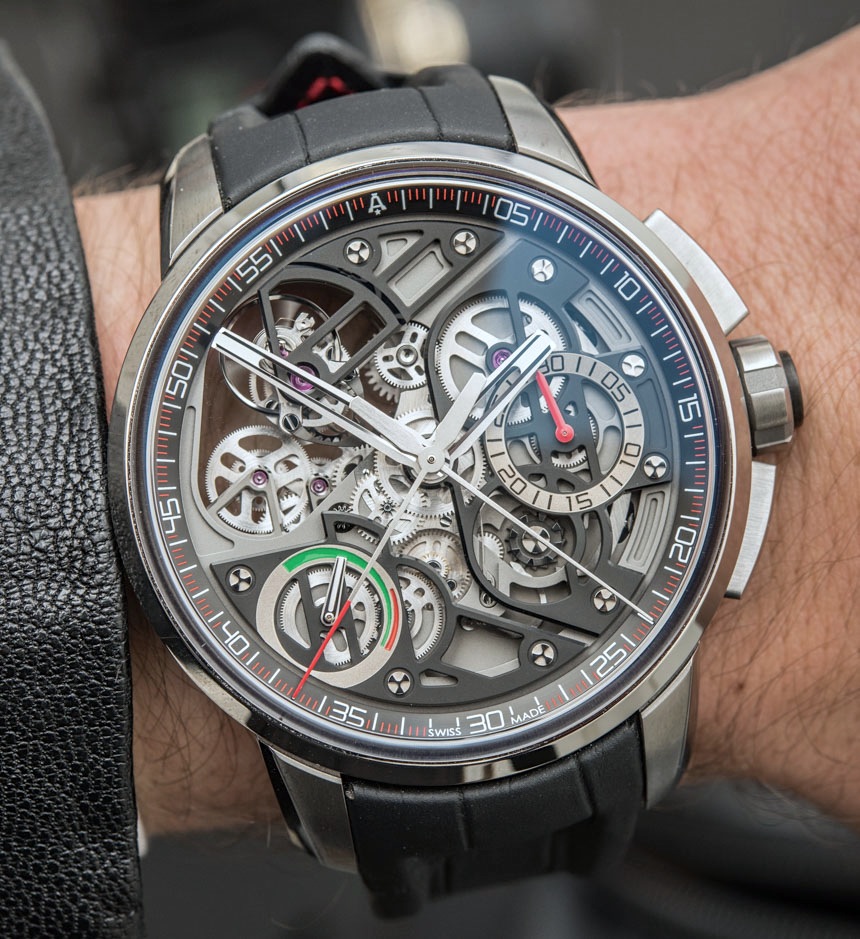 I had the chance to go hands-on with this and other Angelus (and Arnold & Son) novelties a day before Baselworld 2016, as I visited the La Joux-Perret manufacture in La Chaux-de-Fonds. It was here where I got the chance to chat with Sebastien Chaulmontet, head of movement development at Angelus and also a member of the design team. He’s a hardcore Angelus collector, and I wanted to hear from him personally, if he had any plans on resurrecting some of the famed vintage chronographs of the brand. Despite the fact that I did have my fingers crossed for a loud and clear “Yes!” – I had to hear the exact opposite. No old-new Angelus watches for us anytime soon – or ever! 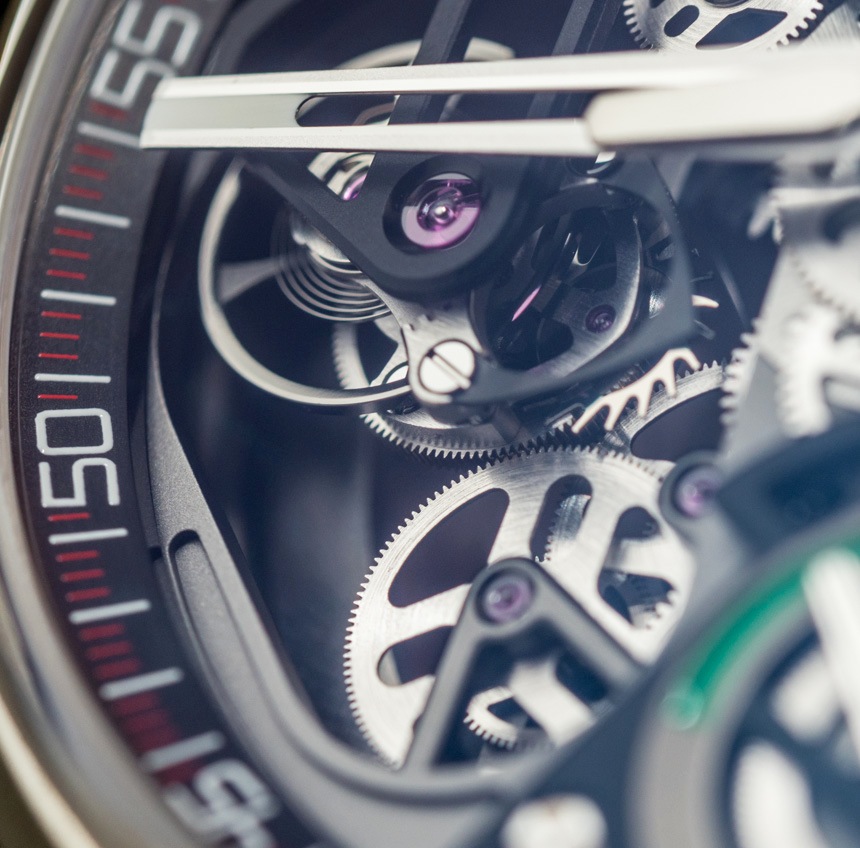 What he did say, though, is that he wants to keep the heritage of the brand intact and instead create new watches that are inspired by the spirit of the brand – and that spirit is none other than innovation. And while there is a good chance I will soon develop a nervous body shake when I hear a Swiss brand say innovation (or heritage), I will also say that the four pieces from modern Angelus are starting to look convincing about his commitment to this approach. 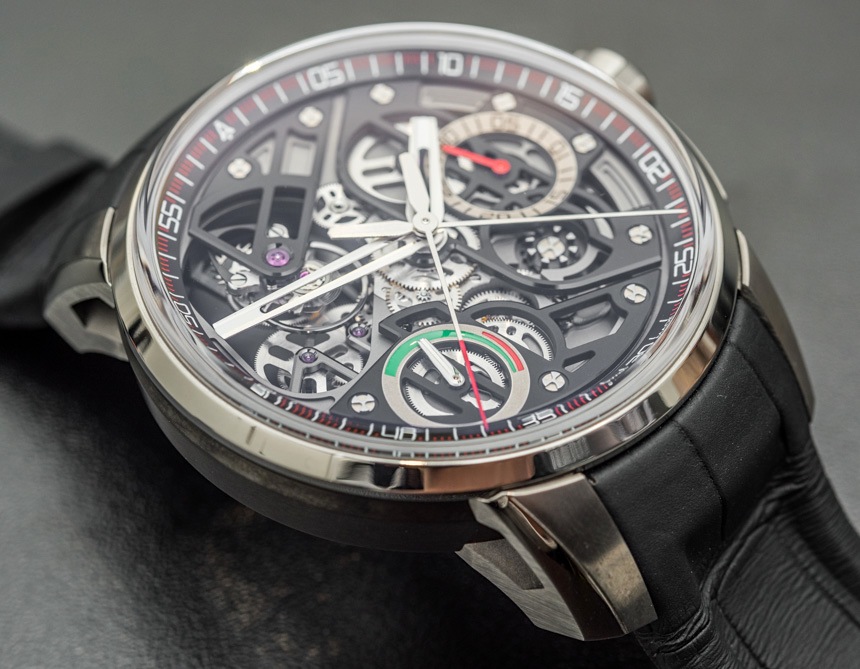 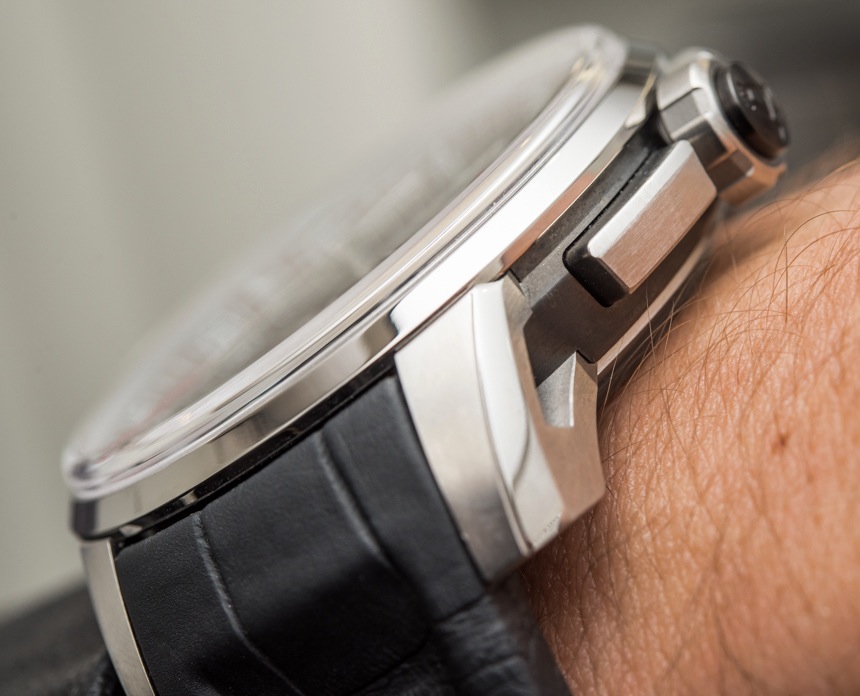 Angelus, originally established in 1891 – and hibernated some time around the quartz crisis until its recent resurrection – had achieved a number of world-firsts during the first period of its history. This includes the first wristwatch with big date (mind you, as Sebastien told me, Angelus couldn’t find a workaround, so the world’s first big date compilation counted up to 39 as opposed to jumping from 31 to 01); the first serially manufactured wristwatch chronograph with calendar; the first wristwatch with alarm and date; first automatic repeater wristwatch; and the first fully waterproof repeater wristwatch. 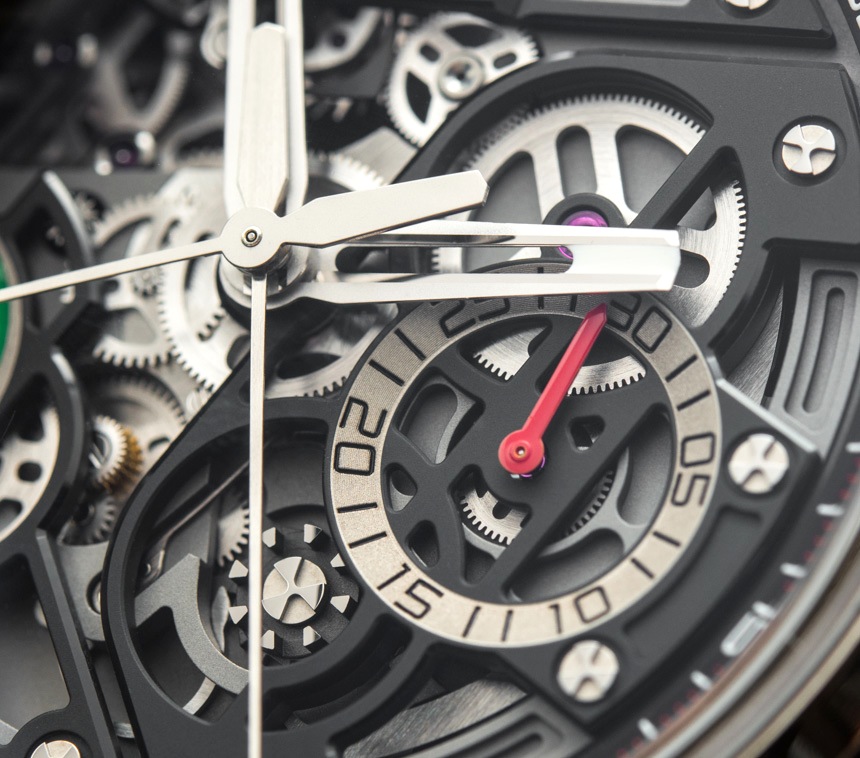 Those are some pretty cool achievements and a lot to live up to. We’ll of course never know how the company’s previous management would have harnessed our time’s manufacturing capacities – but the modern Angelus appears to be dedicated to pushing the envelope.

They do pretty much all of their prototyping in-house, 3D printing oversized maquettes of proposed complications only to then have a watchmaker build the 1:1 sized pieces into watch movements in the same room where they are designed. Coming up with new ideas and features here is what ultimately results in remarkable watch-nerd-awing movements such as the A-150 caliber inside the Angelus U30 Tourbillon Rattrapante. 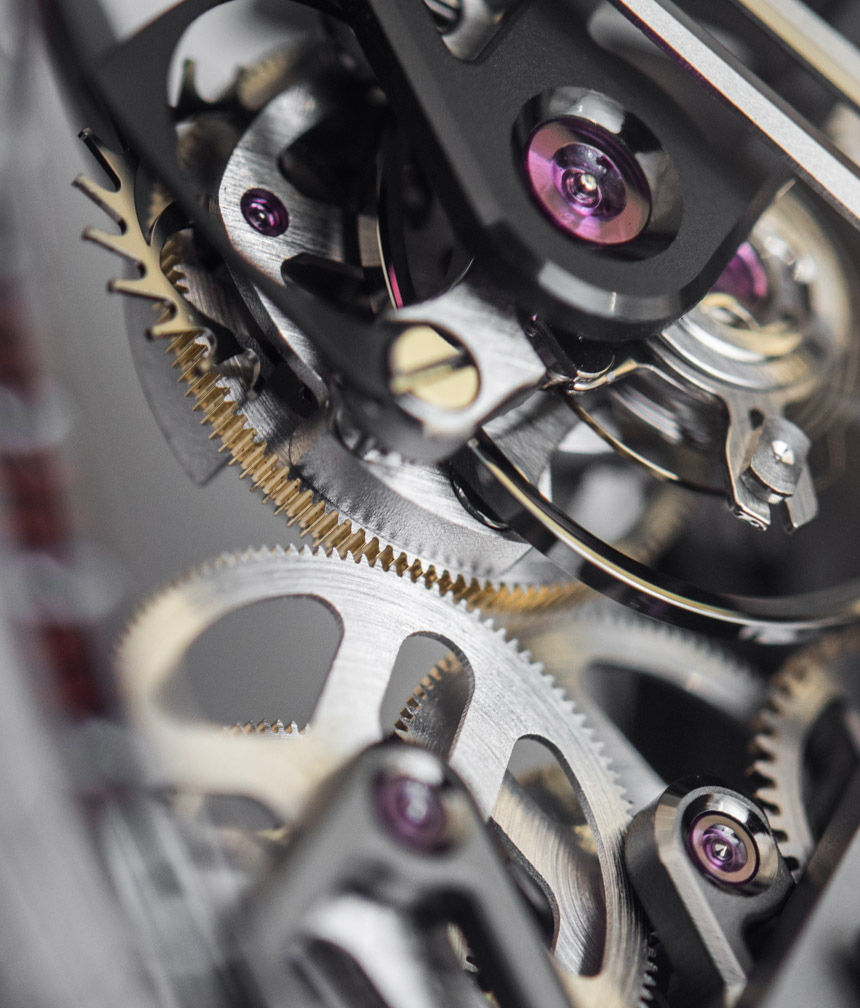 On a side note, and then we’ll get back to the watch at hand, I will also say that when Angelus released the U10 Tourbillon Lumiere (hands-on here) in 2015, I had no idea how that was worthy of the Angelus name. Now, with the Angelus U20-30-40 watches debuted at Baselworld 2016, the picture seems to be completing itself as we get a better idea of where this brand is headed.