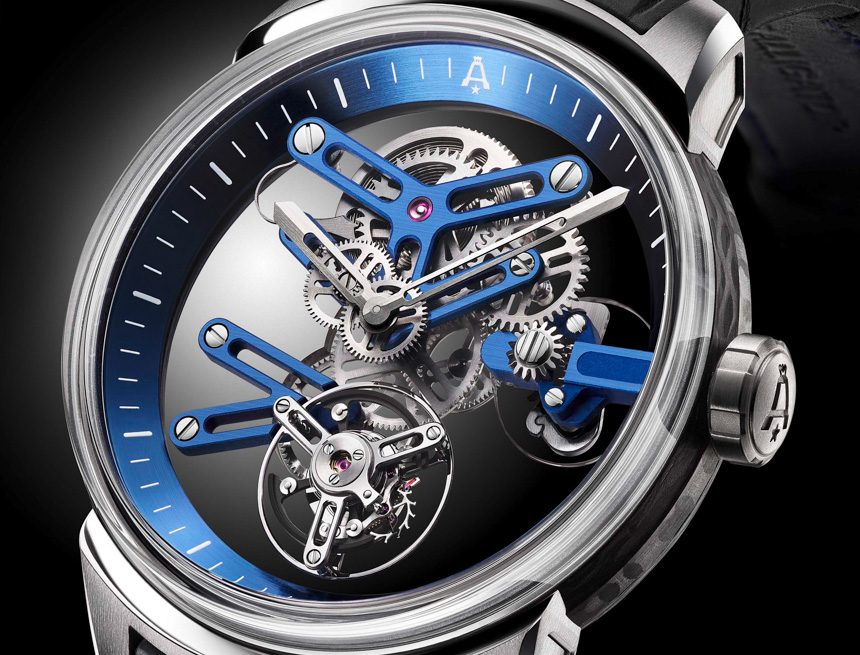 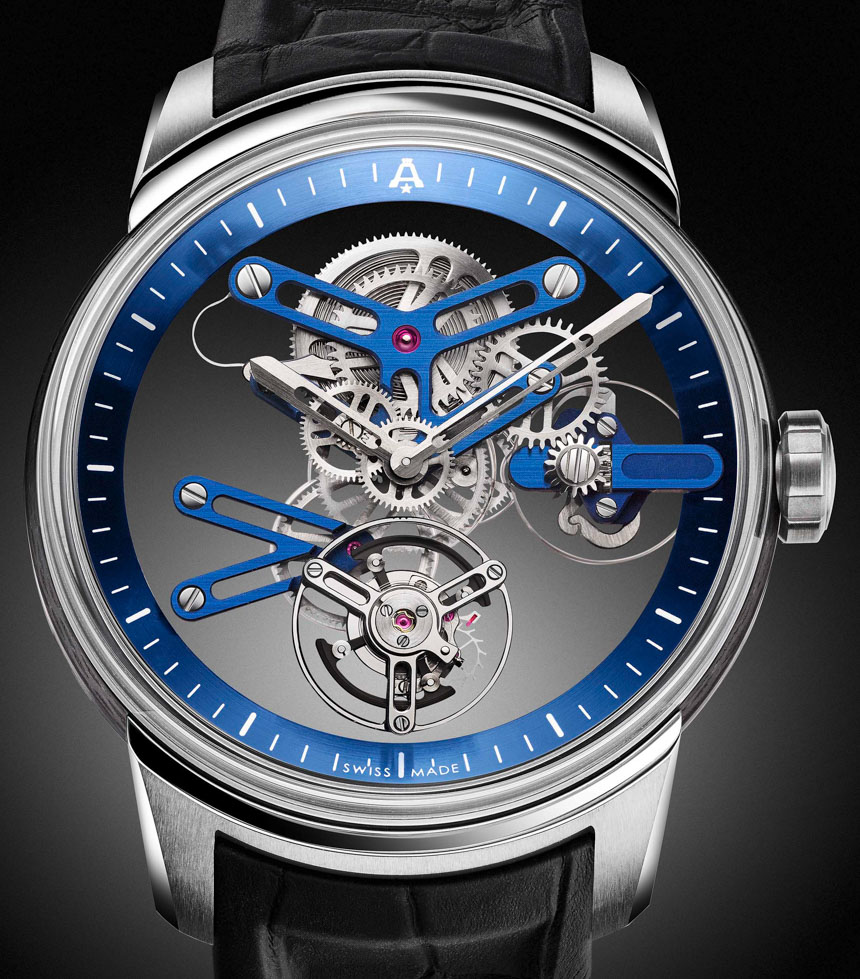 The Angelus U20 Ultra-Skeleton Tourbillon wants you to forget about microscopic texts discreetly saying “tourbillon” on solid watch dials. With an “ultra-skeletonized” movement, the Angelus U20 puts everything on show, practicing levels of transparency scarcely experienced in the Swiss watch industry. A flying tourbillon, bridges in blue, and everything else you’d possibly want to see: it’s all laid out in front of you. All it takes is a fair bit of engineering, a sprinkle of blue titanium, and some massive pieces of sapphire crystal. 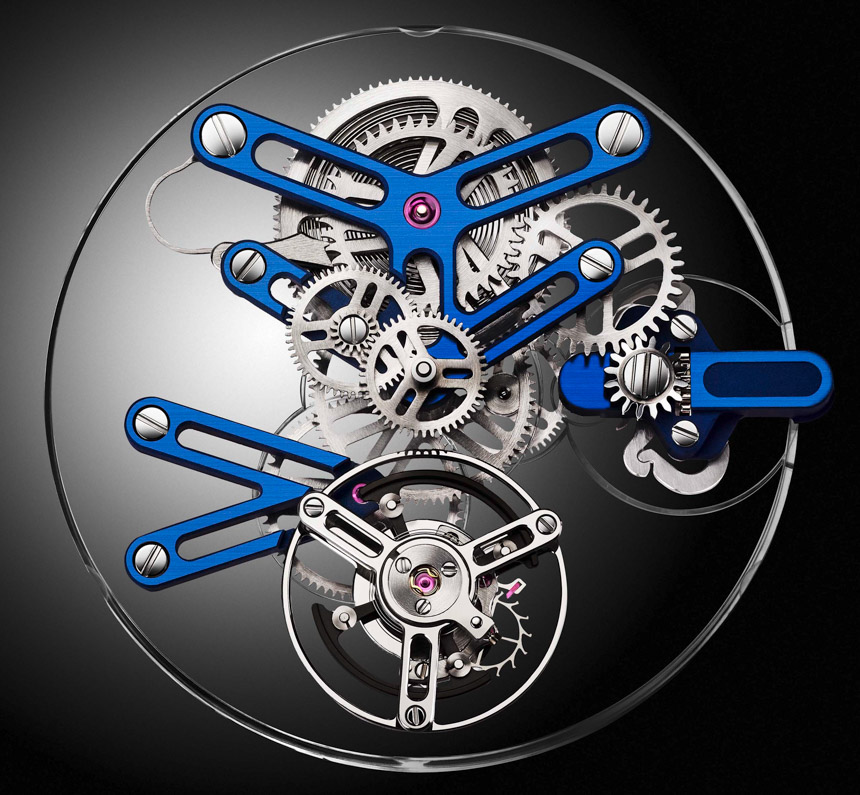 You may remember the Angelus U10 (hands-on here): it was the first watch from this new-old brand – one of many recently revived companies that have taken a very, ahem, new direction from where they originally left off. While Angelus went bust in the 1970s during the trying times of the quartz crisis, it was revived in 2011 by Swiss movement manufacturer La Joux-Perret – who also produces Arnold & Son and whose Sebasiten Chaulmontet has been a long-time Angelus collector.

Bumpy history aside, Angelus is back, taking a deep breath as it dedicates its efforts to harnessing the engineering and design powers of La Joux-Perret, rather than to work as an accurate tribute to the historical Angelus, the famed chronograph manufacturer that was originally established in 1891. As such, the Angelus U20 Ultra-Skeleton Tourbillon is unapologetically modern both in its design and use of materials. 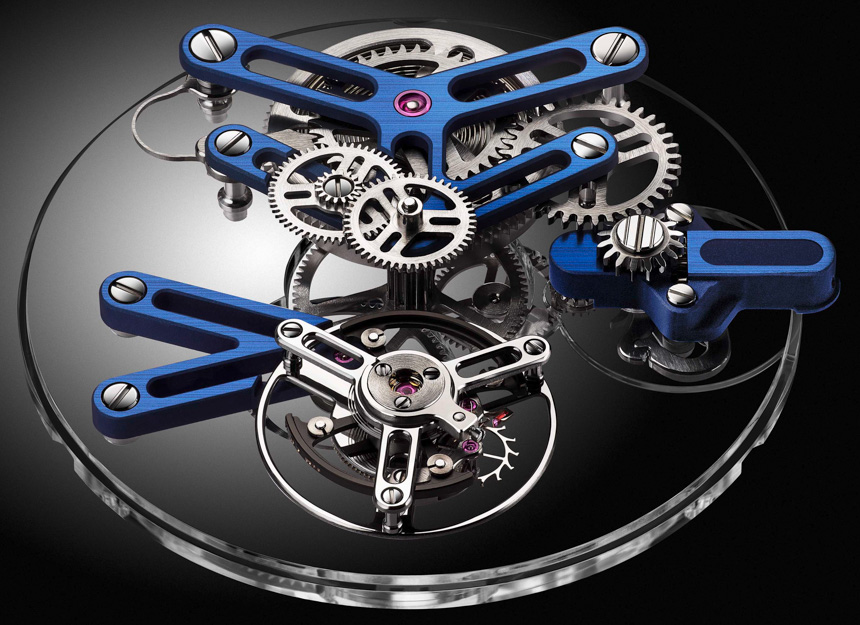 While it may not be entirely obvious upon first sight, the coolest feature of the Angelus U20 Ultra-Skeleton Tourbillon is its sapphire crystal main plate – that one chunky piece of sapphire that allows for all this amazing see-through-ness. It has been machined and carefully drilled to accommodate the setting points for the bridges and other movement components – which must have been a real pain in the neck because, while sapphire is really stable and super hard once it’s been cut, it is extremely fragile and prone to cracking when molested with machinery. 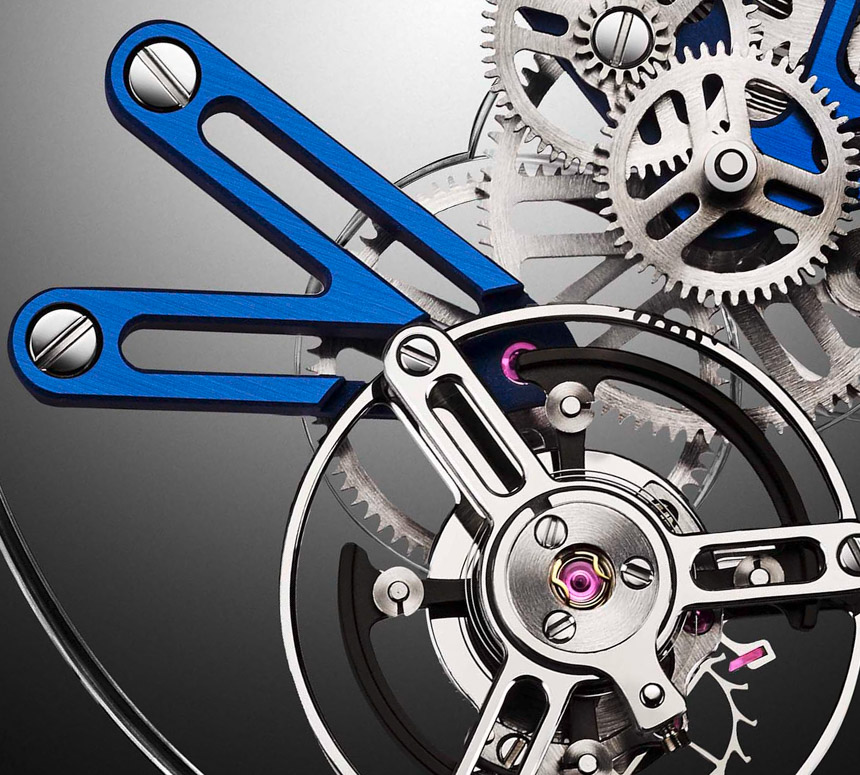 Angelus goes out of its way to emphasize the haute horlogerie quality levels of the movement, highlighting extensive hand-finishing efforts on its blued titanium bridges and steel components. We will be sure to check on all these claims when we bring you a hands-on look at this new piece from BaselWorld 2016 – I am sure the sapphire plates and blue titanium bridges will be a joy to photograph. 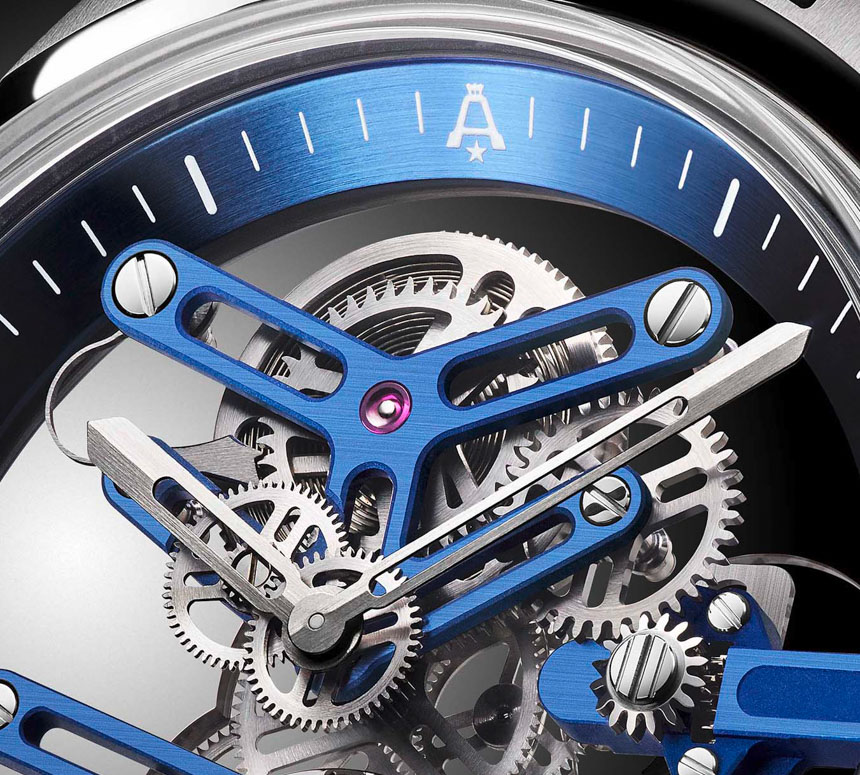 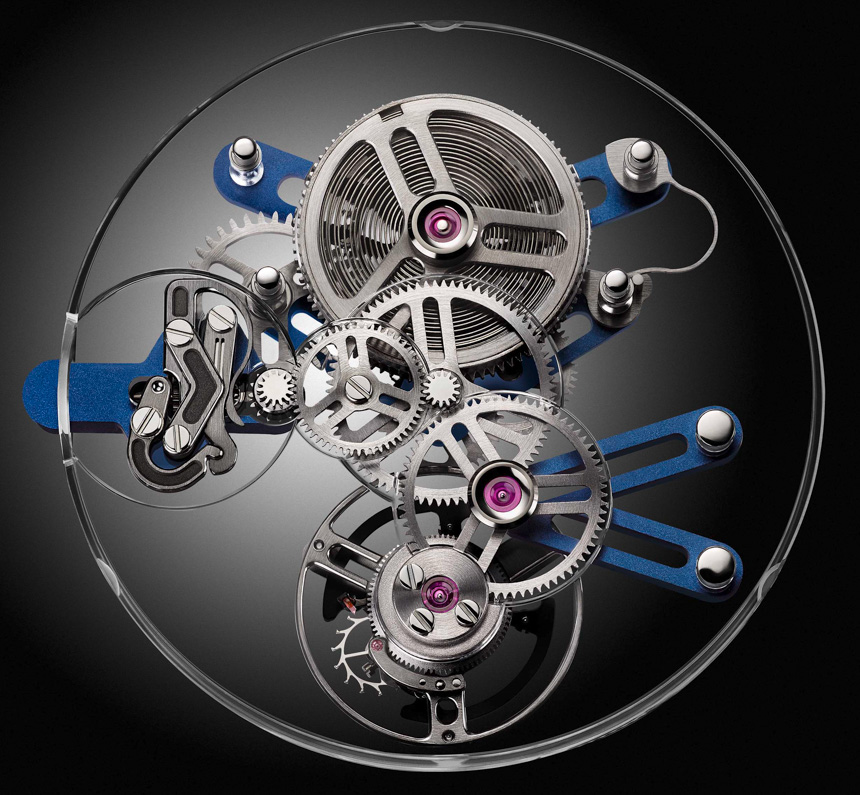 The set of blued titanium bridges that seem to be floating in the middle of nowhere hold the mainspring barrel, the keyless works for the crown, as well as some parts of the going train. Seemingly nothing secures an essential part of the movement though: the one-minute tourbillon is of the “flying” sort, meaning that there actually is nothing above it (on the dial side) to fix it to the movement, and even from underneath, it appears to be almost invisibly attached to the sapphire plane of the main plate. 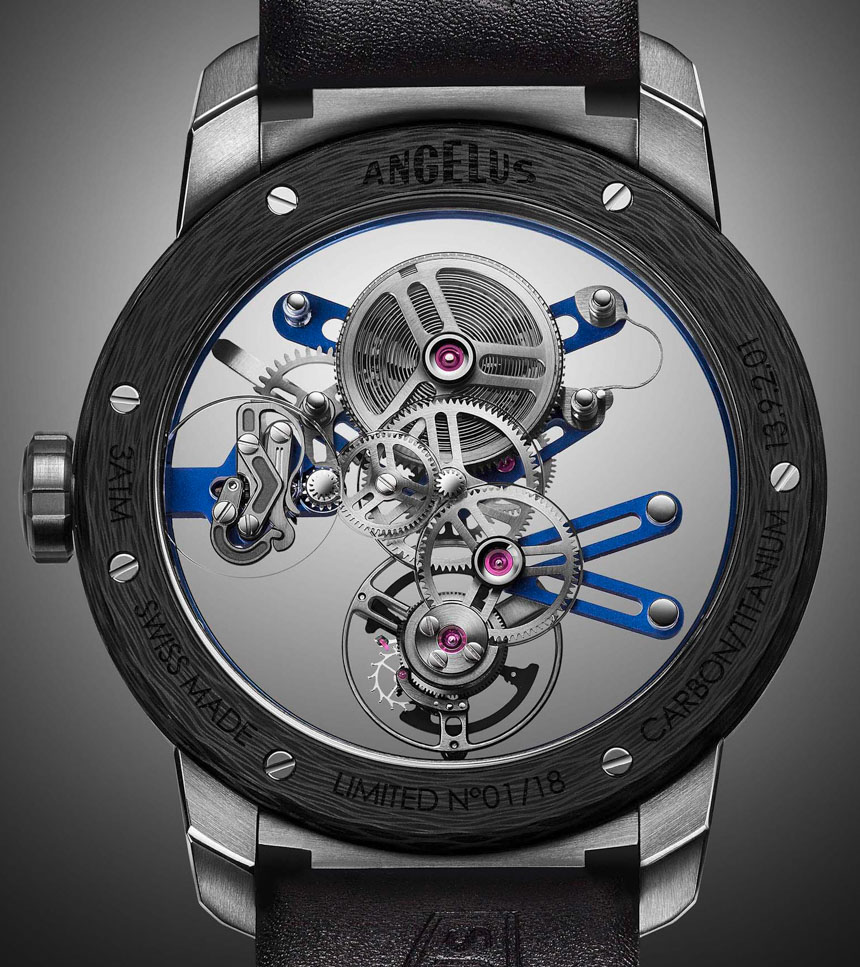 The tourbillon cage is in steel, an unusual choice because of its considerable weight (not a preferable attribute for a tourbillon that generally has to be as light as possible), and also given all the titanium used for the Angelus U20 Ultra-Skeleton Tourbillon’s movement and case. It is true, though, that the cage has been excessively skeletonized and hand-finished with hand-chamfered edges and hand-polished surfaces all around. 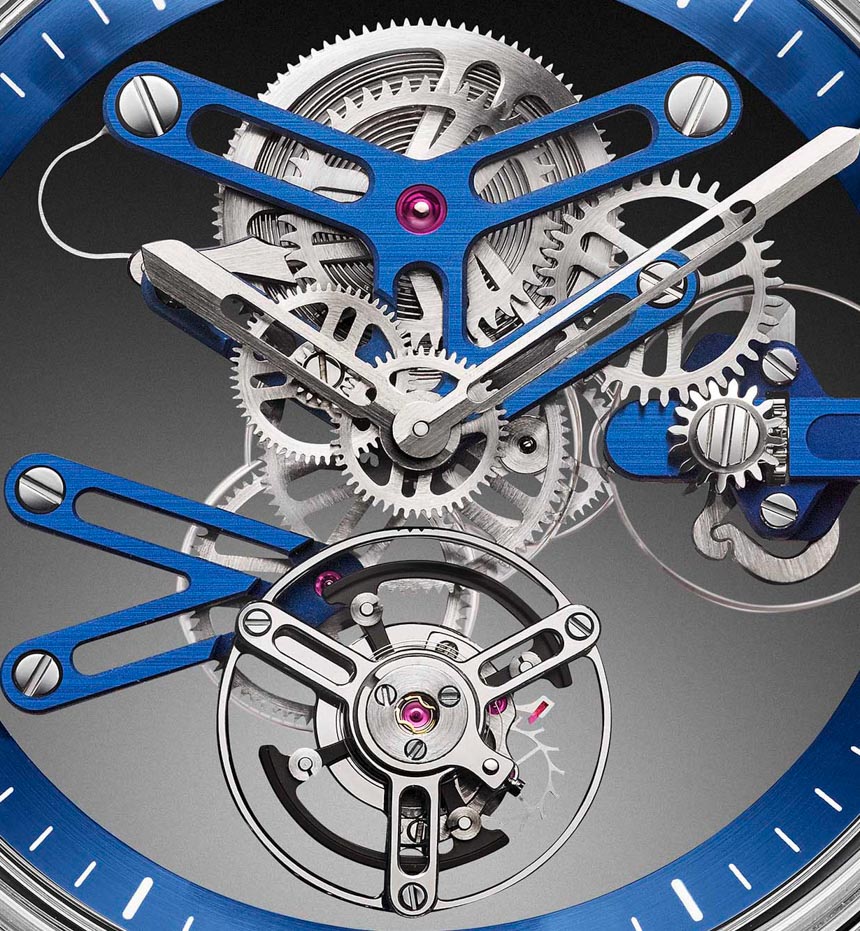 The Angelus A-250 caliber runs at 3 Hertz, or 21,600 vibrations per hour, for an impressive 90 hours after it’s been fully wound by hand. It is 32.60 millimeters wide and only 5.78 millimeters thick, and is fitted into a 42-millimeter-wide case that is a blend of carbon fiber and titanium, with two more substantially sized pieces of sapphire crystals to encapsulate it from the front and back. This piece of crystal on the front has been shaped to also serve as the bezel of the case – an eye-pleasing, but nerve-wracking design decision, as it provides excellent opportunities to see the movement from fascinating new angles, but also to shatter the front by accidentally banging it on something. 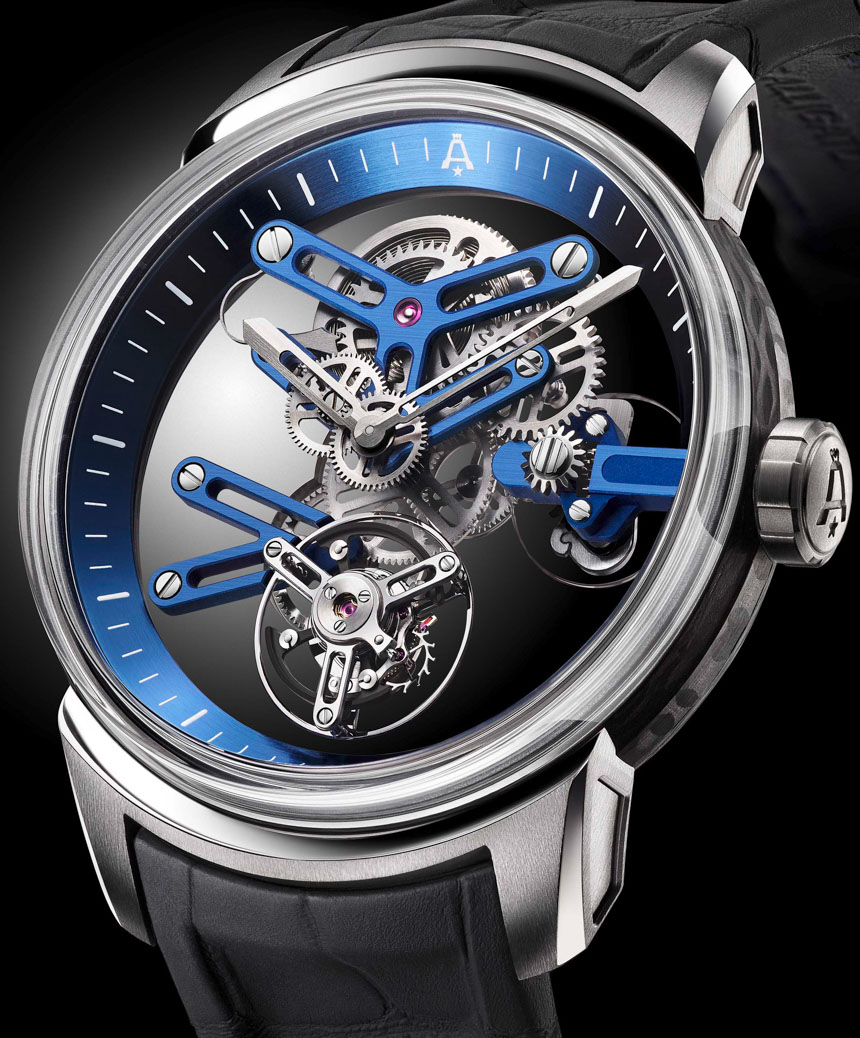 The U10 from last year had a bold, rectangular case design that had its own special way of exposing the tourbillon. The Angelus U20 Ultra-Skeleton Tourbillon scales back on case aesthetics but ups its game on skeletonization and movement construction – serving as a cool and indeed very welcome continuation of this old-new brand. With all that said… I still do wish that Angelus also surprised us with some beautiful re-releases of its iconic chronographs from the 40s and 50s. Price for the Angelus U20 Ultra-Skeleton Tourbillon is $71,950. angelus-watches.com