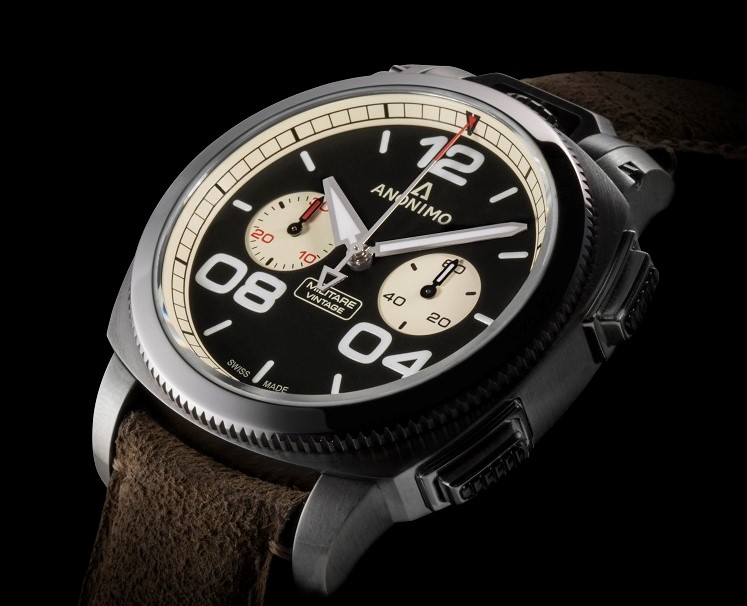 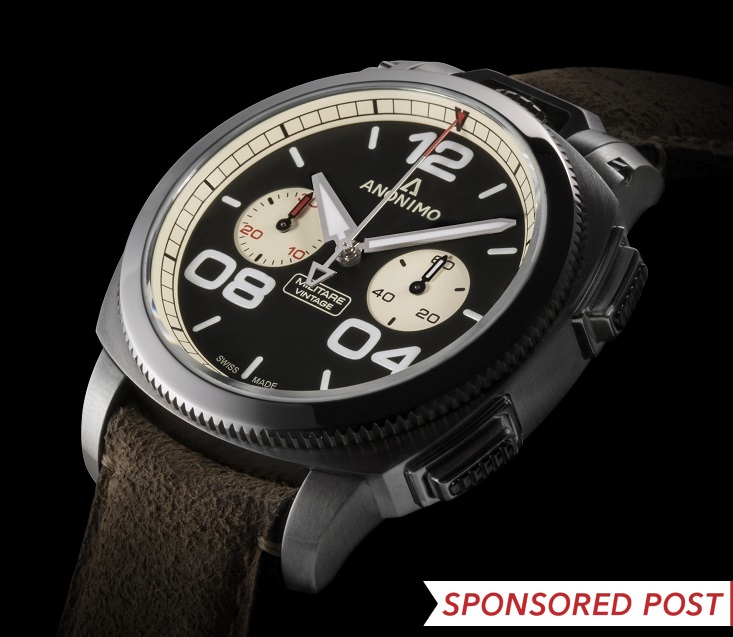 This year marks the 20th anniversary of Anonimo, a brand co-founded by former Panerai CEO Dino Zei and Federico Massacesi in 1997. To commemorate this point in their history, Anonimo has announced their new Anonimo Vintage Collection. The line-up consists of two models that feature several modern appointments while retaining many of the classic design elements the Florence-based manufacturer is known for. Perhaps the most notable piece in the collection is the Anonimo Chrono Militare Vintage, a clean racing-inspired chronograph that’s offered in two “panda-style” colorways. 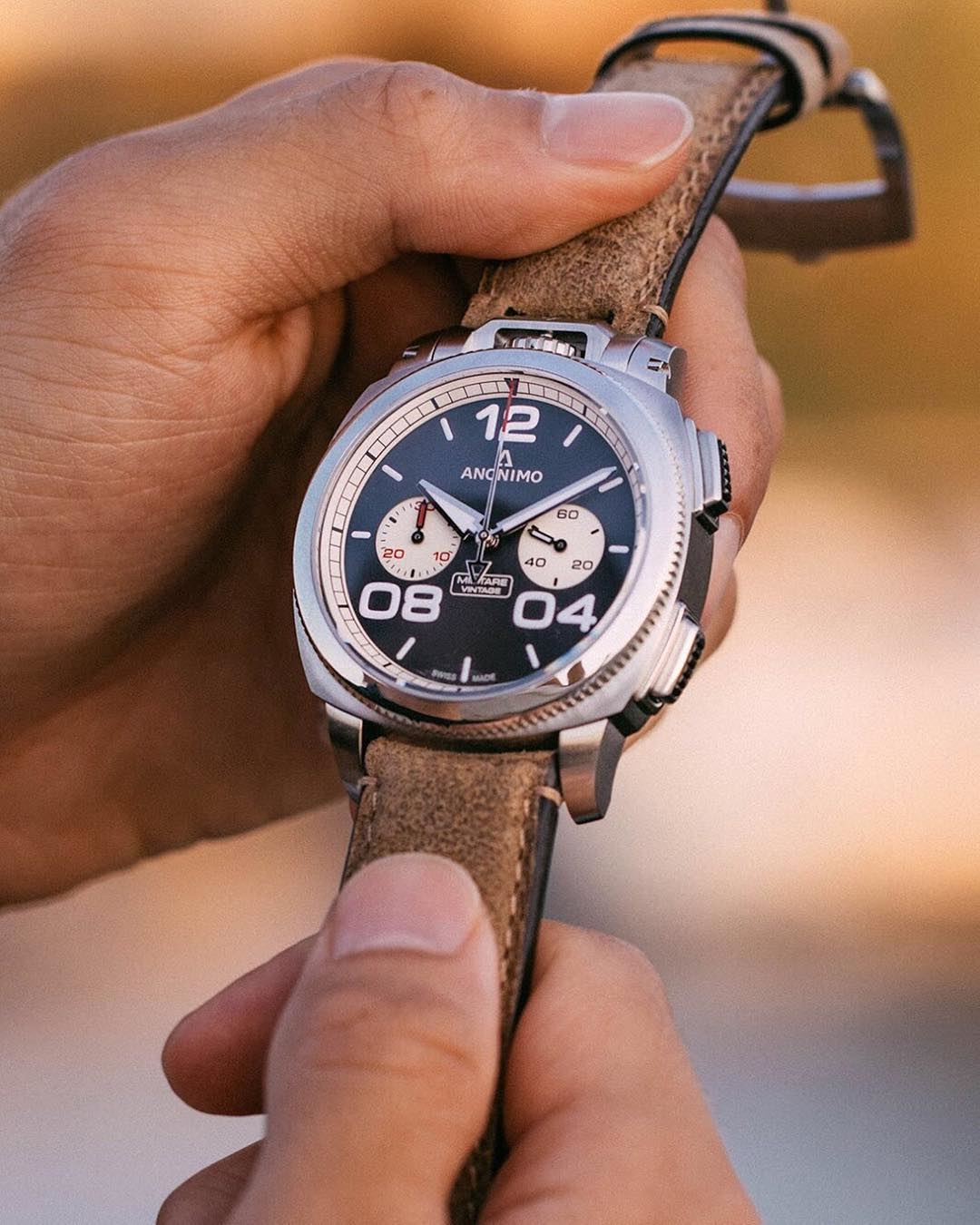 While Anonimo is typically associated with larger dive watches and their bronze cases, the models in the Anonimo Vintage Collection deliver a slightly more conservative, heritage look. It is worth noting, however, that Anonimo’s work with bronze is spot on and they take pride in the fact that they developed and marketed several bronze models (their first in 2006) while many other manufacturers held back due to the uncertainty surrounding the material’s longevity. This is yet another notable piece of their 20-year history that they hope to celebrate with the release of the Anonimo Vintage Collection. 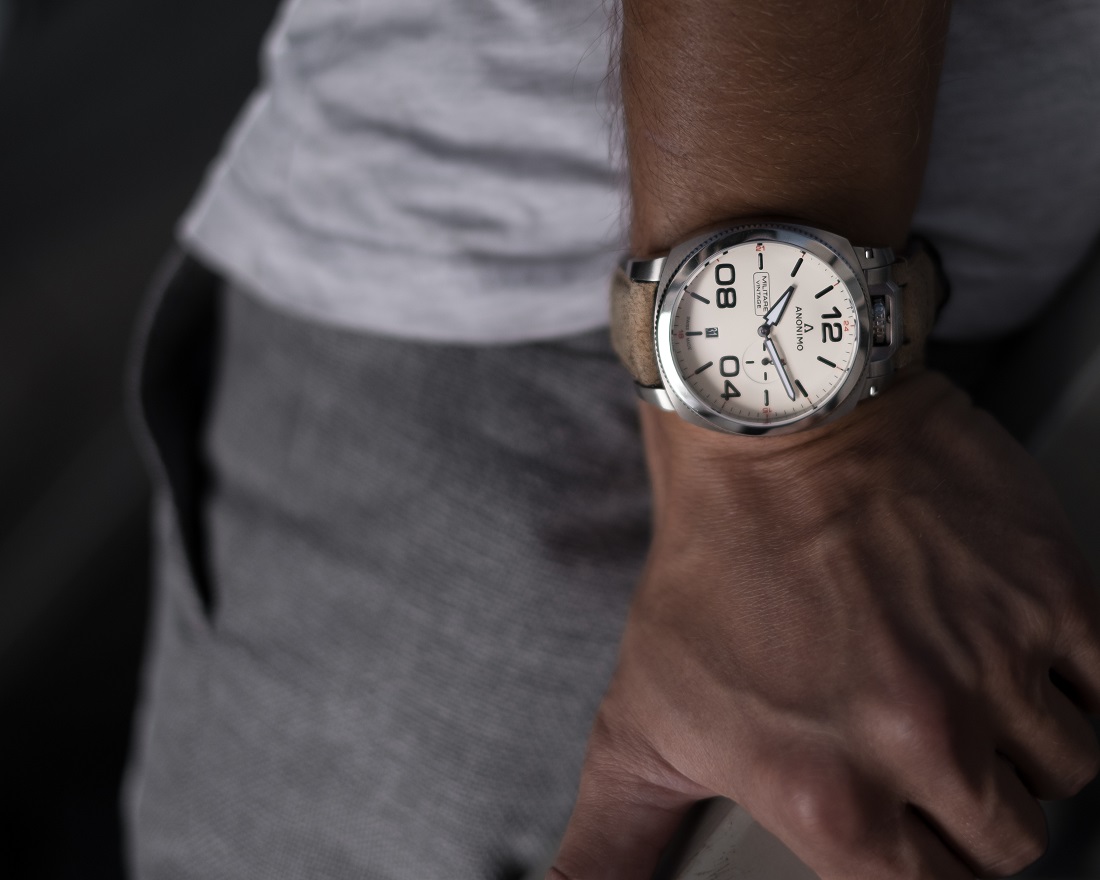 Aside from the Anonimo Chrono Militare Vintage, the other piece in the collection is the Auto Militare Vintage, which is a simple, yet compelling cornerstone for the collection. It features a warm, eggshell colored dial with a distinct set of Arabic numerals marked “12, 04, and 08.” The accompanying large handset and the prominent indexes make for a highly legible display. As a time-only watch, it can be difficult to grab the attention of hardcore enthusiasts but Anonimo has managed to pack in more than enough intriguing visual elements to keep the watch interesting. 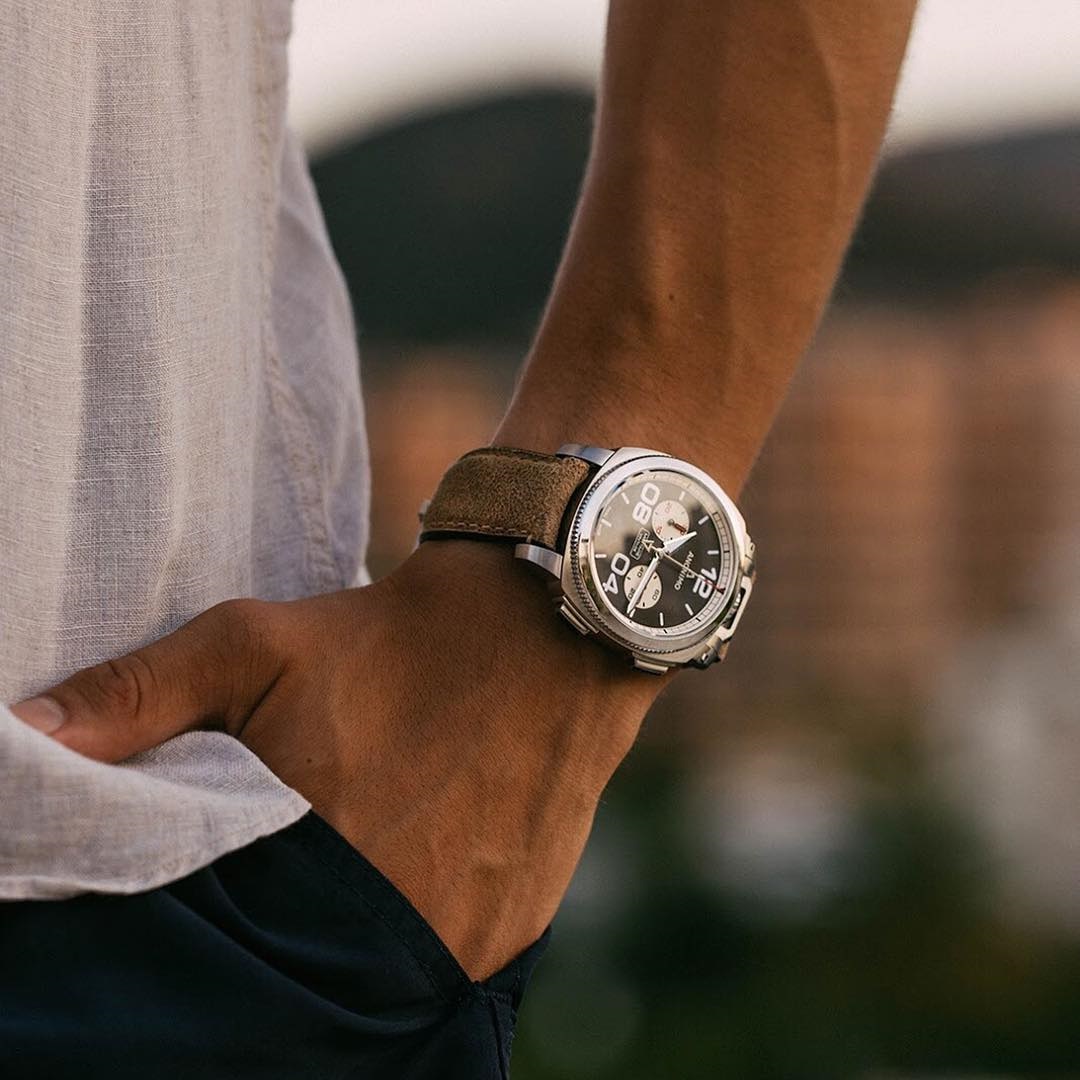 Among those is the crown, which is actually positioned at 12 o’clock to aid with comfort as well as the symmetry of the 120m water-resistant cushion case. It’s easy to grip and Anonimo has cleverly built the crown-protecting structure into the top half of the integrated Italian calf leather strap. The case measures 43mm in diameter, has an AR-coated sapphire crystal, and a display caseback. For the movement, Anonimo chose the Sellita SW260-1, which supports the 3 o’clock subsidiary seconds display and a clean 6 o’clock date window. Fitted with a Côtes de Genève decorated oscillating weight, the movement provides the wearer with 38 hours of power reserve. 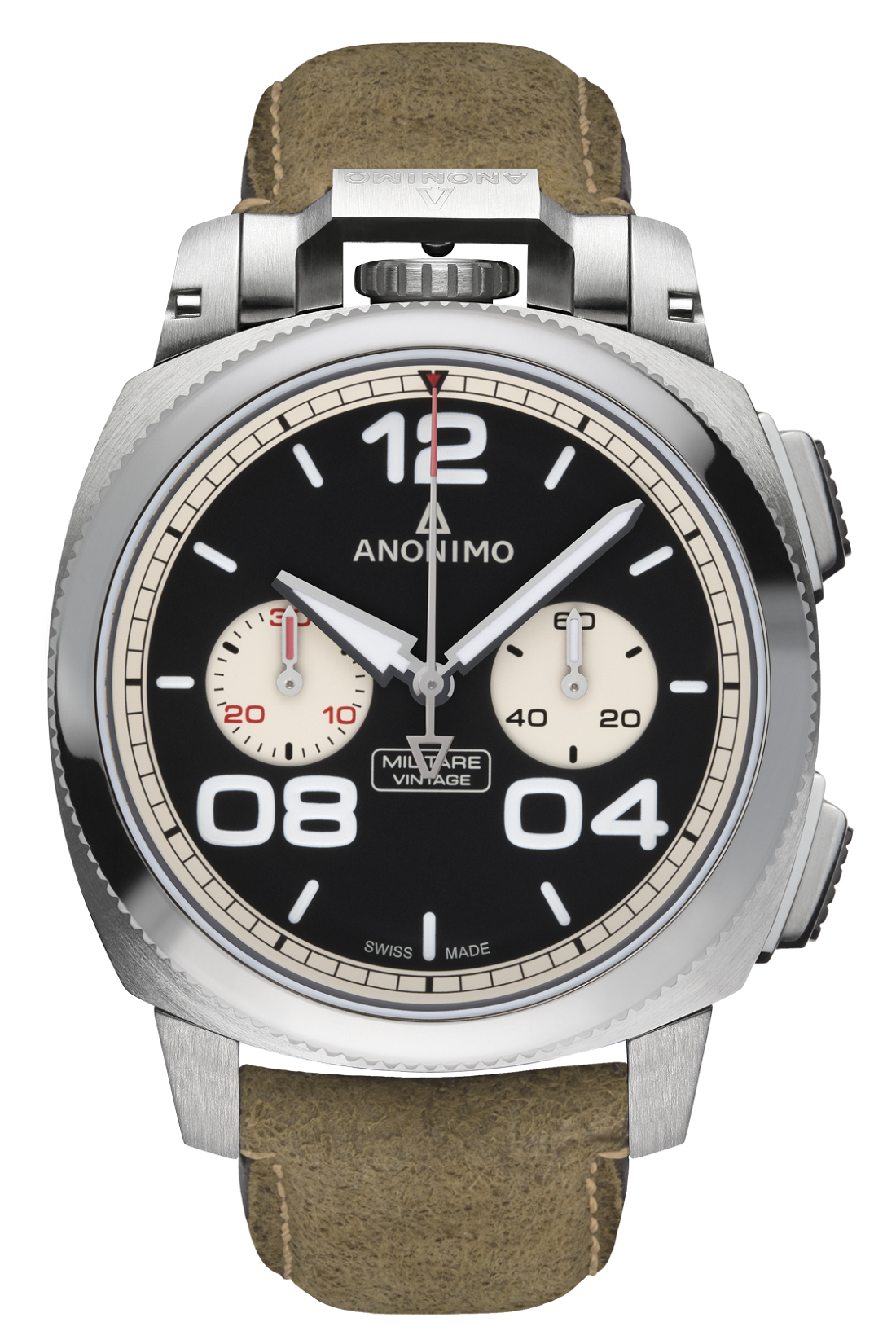 Once again, the star of the collection is the Anonimo Chrono Militare Vintage. This racing-inspired chronograph features a similar cushion-style case that has been adapted for the Sellita SW300 equipped with a Dubois Dépraz 2035M chronograph module, developed exclusively for Anonimo. The pushers are seamlessly integrated and allow for tactile, responsive operation of the chronograph functions. Like the Auto Militare Vintage, the watch was designed with the same set of Super-LumiNova coated hands and numerals that complement the basic two-register chronograph layout. The most striking feature, however, is the dial colorway and the watch can be ordered in what collectors usually refer to as “panda” and “reverse-panda” colors. These are dials inspired by the “Exotic” dial variants Rolex released in the mid-1960s, which later became popular with Italian collectors who started referring to them as “Newman” dials. 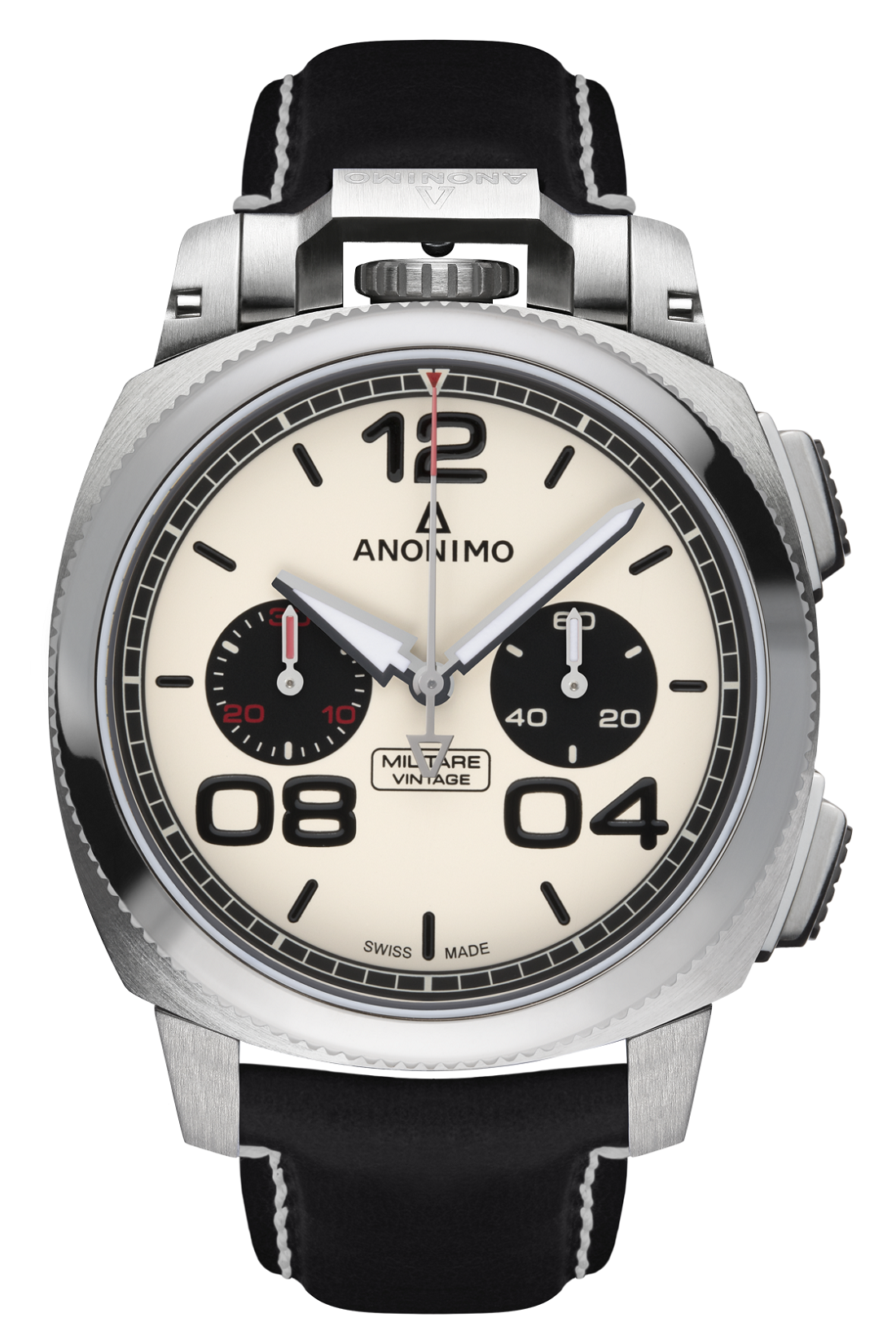 While certainly still somewhat of a young name in the watch industry, Anonimo can pridefully stand by their accomplishments and developments over the past 20 years. The last two decades have been full of innovation, change, and diversity, with new products inspired by new talent and new locations. Price for the Anonimo Auto Militare Vintage is 2,590 CHF while the Anonimo Chrono Militare Vintage is 3,890 CHF. As Anonimo looks forward to the next 20 years of watchmaking, it sees a future of innovation and adaptability, but also a future which continues to honor the tried, tested, and trusted techniques of the Swiss and Italian watchmaking artisans of the past who originally inspired the brand’s creation. anonimo.com