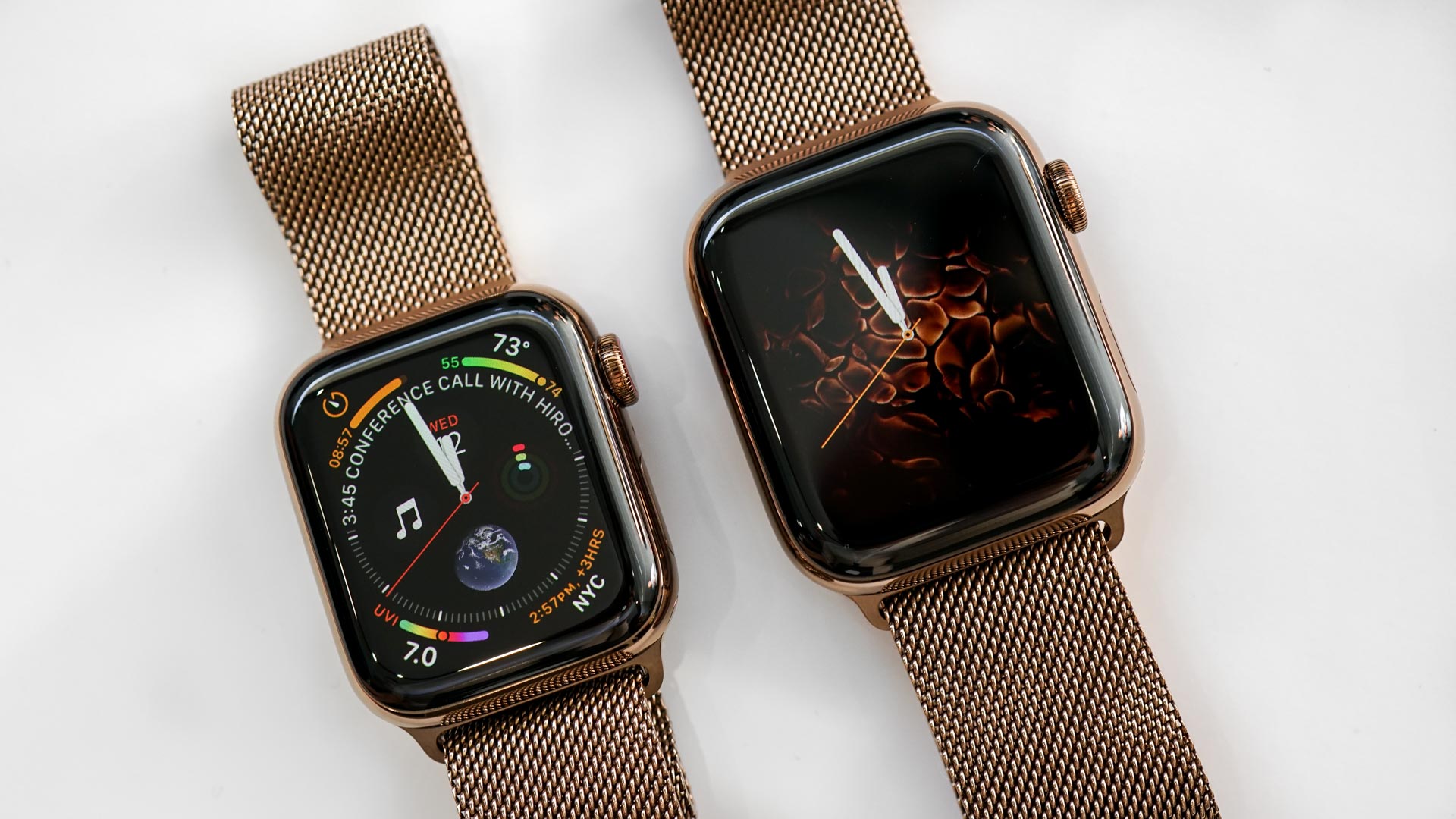 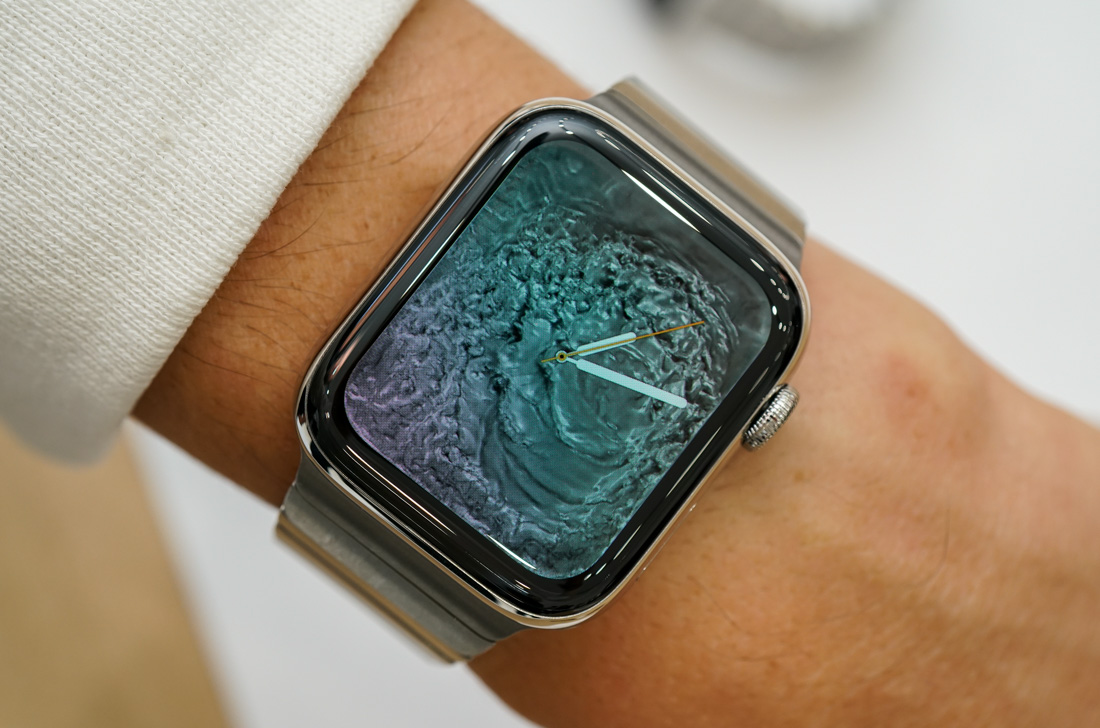 It’s a watch. Says so right there in the title. But the Apple Watch still has a funny way of dividing the community between a battle line that seems to have been drawn by our collective life experiences and worldviews. Is the dress blue or yellow? Do the ink blots resemble a fitness tracker, a medical device, or perhaps some existential threat to analog elitism? We went hands-on with the new Series 4 Apple watch moments after it was unveiled by Apple CEO Tim Cook, to see if the gushing promises of “profound impact” on our lives might actually come to fruition. Fourth time’s a charm, right? 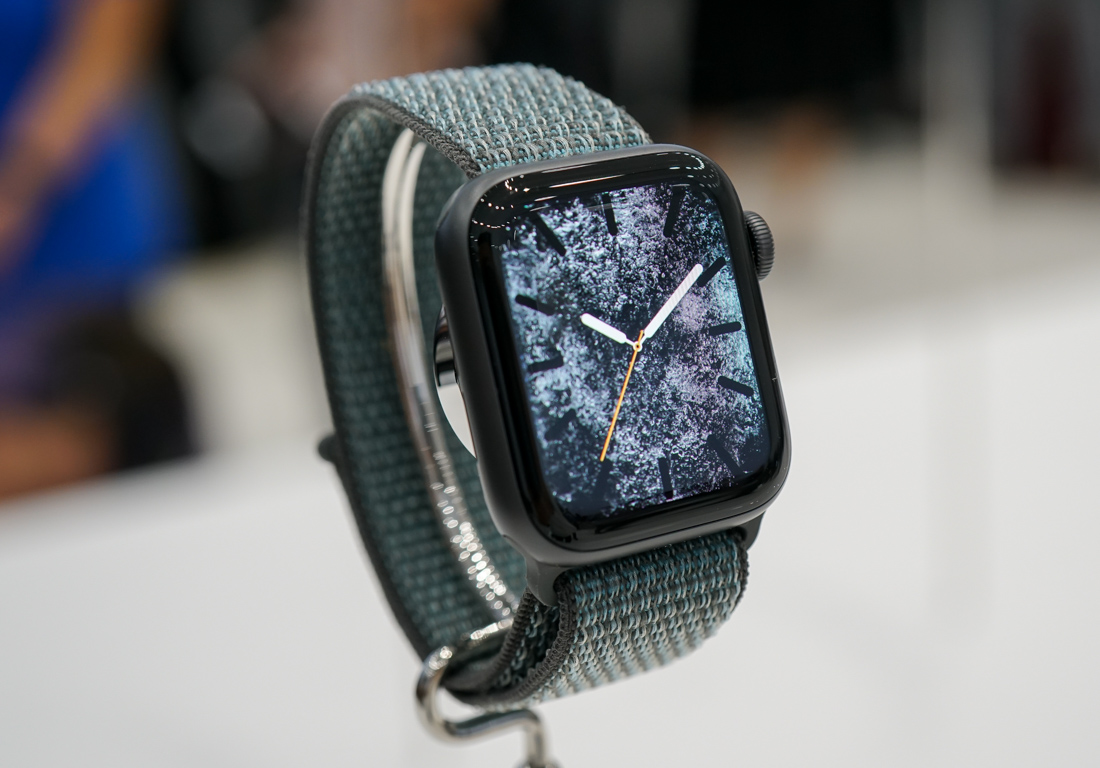 But before we get too deep into the features or emotional analysis of the new Series 4, it’s important to lead with a few of the key physical differences of this new Apple Watch, and how it feels on the wrist. What came as a bit of a surprise itself, is that if you were to cast a glance at a distant wrist wearing one, you might find there’s very little from a visual standpoint that dramatically differentiates it from the Series 3. Even the straps are fully cross-compatible, including the buttery-soft Hermes calf leather, and the exquisite-but-not-new milanese loop and organic horizontal link stainless steel bracelets. This means that since no new straps were introduced for the Series 4 (with the exception of a neat Nike nylon strap with reflective thread), the new models look ostensibly like the outgoing ones. 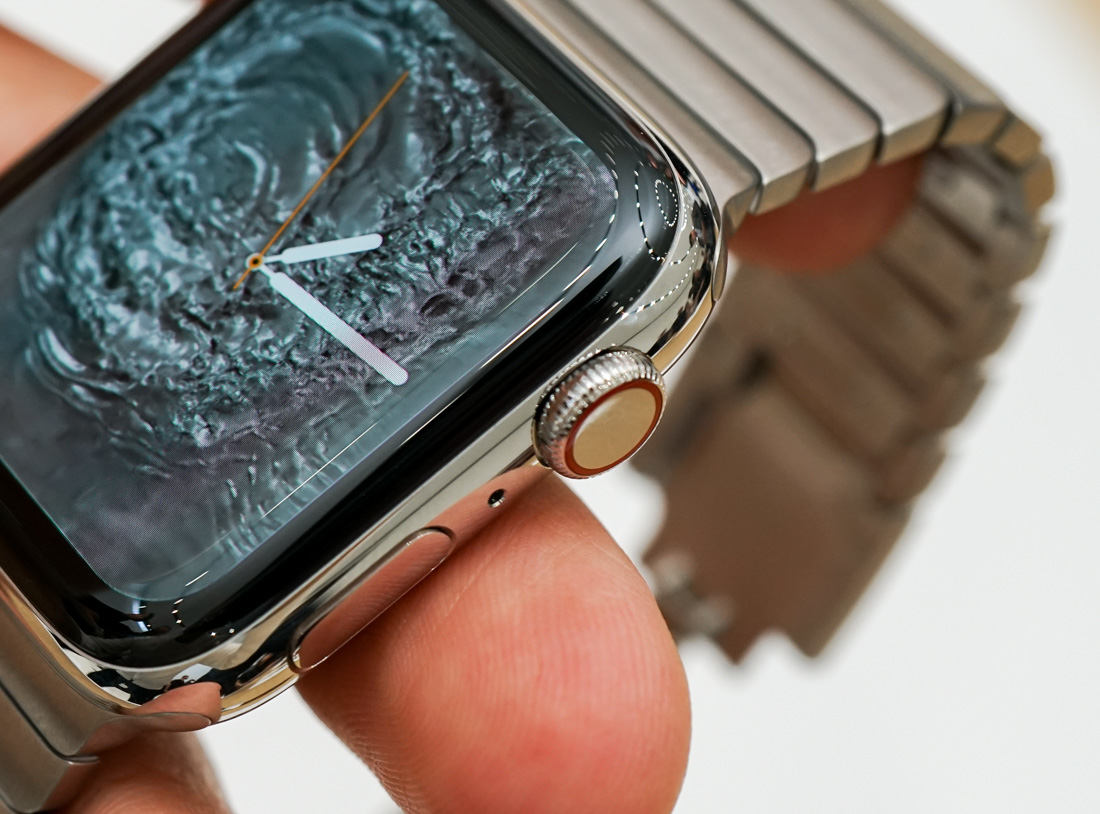 However, a few key physical differences do persist, starting with the size – both variants of the Series 4 are now 2mm larger (the 38mm and 42mm Series 3 variants both jump to 40mm and 44mm with screen apertures increased by 32% and 35%, respectively), yielding a broader, more rectangular profile and a subtly rounded display that stretches to the near-edge of the sapphire glass. The effect is particularly arresting with the new dynamic resting screens: ‘fire,’ ‘water,’ and ‘vapor’ all of which interact with the edge of the display in different ways. 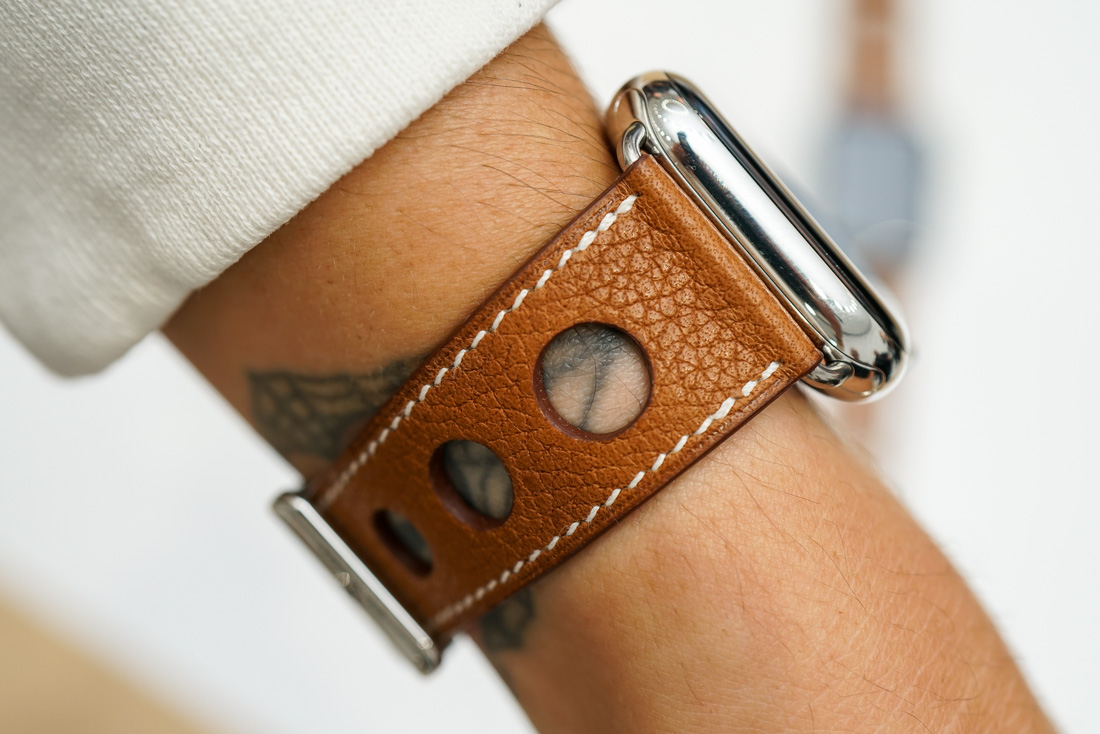 But before you worry too much about the increase in size, remember that the thickness has been reduced by just under a millimeter, and the home button now sits completely flush against the 4:00 side of the case, yielding an overall sleeker aesthetic on the wrist that defies the increase in diameter on both models. It also came as somewhat of a surprise that the 40mm felt overly small, and the 44mm ‘just right’ even on my flat 6.5” wrist. As before, if you’re buying the watch for the gym, the lightweight anodized aluminum case remains the way to go. For those seeking a familiar traditional “watch feel,” stainless steel is both satisfying, and reassuring in weight. Otherwise, interacting with the device itself offers little variation, save for the digital crown’s new haptic feedback, which offers a reassuringly tactile ‘scrolling’ feel as you navigate through the apps and options. 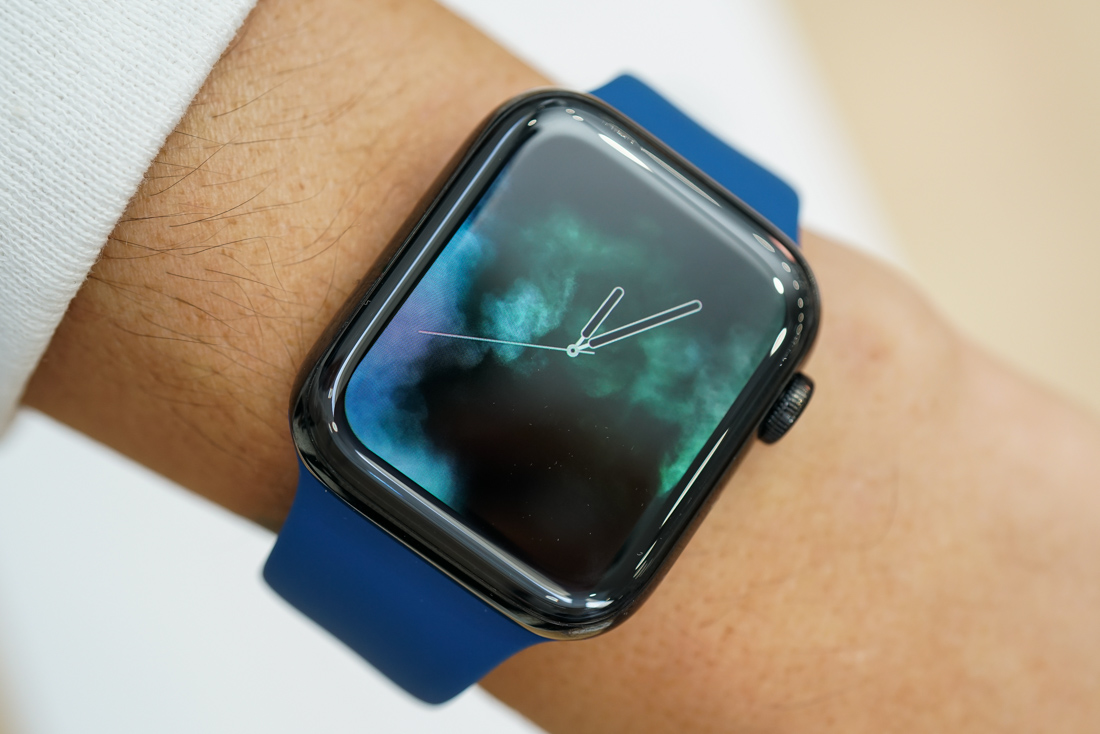 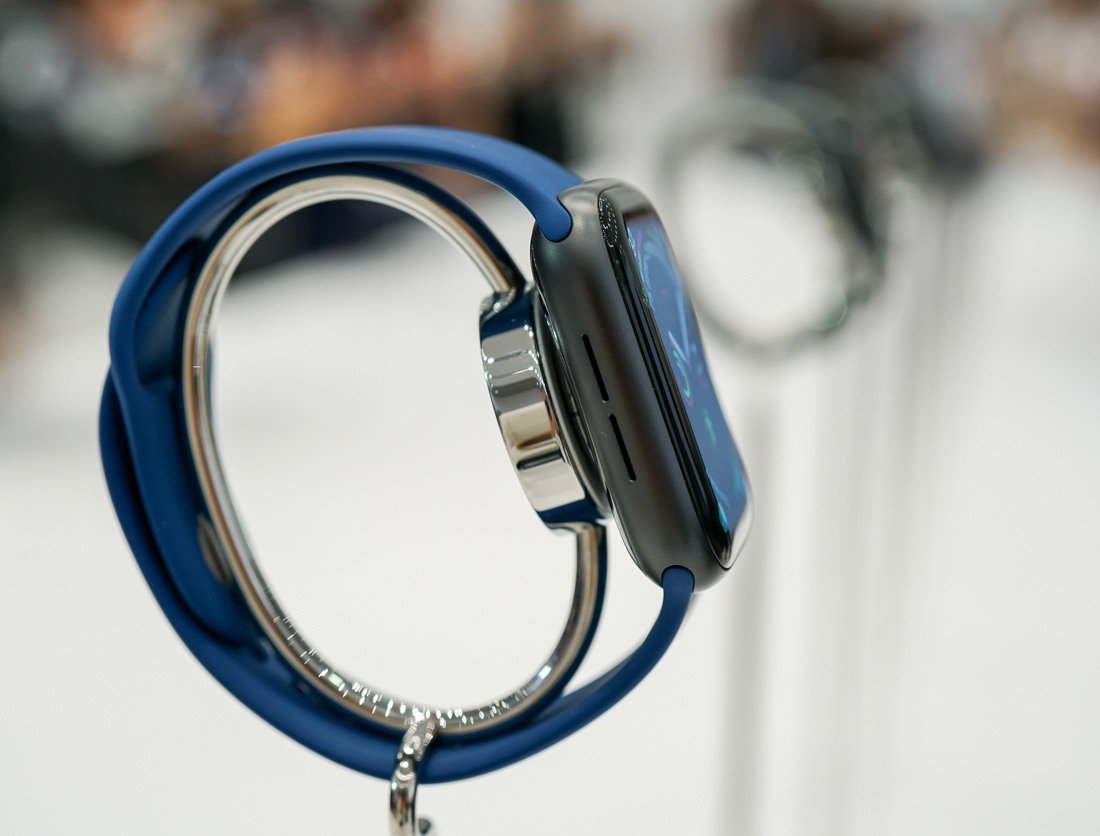 Unfortunately, we weren’t able to test the new accelerometer (which summons an EMT or alerts loved ones to a fall) or electrocardiogram – the latter of which being the Series 4’s most talked-about feature, which apparently isn’t quite ready for prime time. If this is the first you’re hearing, the Series 4 is equipped with a pair of electrodes in the sapphire caseback and digital crown, which together enable the wearer to perform an ECG (reported by Apple as an over-the-counter first, a claim which was later disputed, as the KardiaBand beat the Series 4 to market by a little over a year). The beefed-up sensor in the caseback explains its generous sapphire dome, which looks as though it might be uncomfortable, but nestles into the skin without discomfort. While those sensors are a critical part of the Series 4 hardware when the device starts arriving on wrists later this month, the actual ECG Watch app that’ll utilize them won’t be available until a little later in the fall. 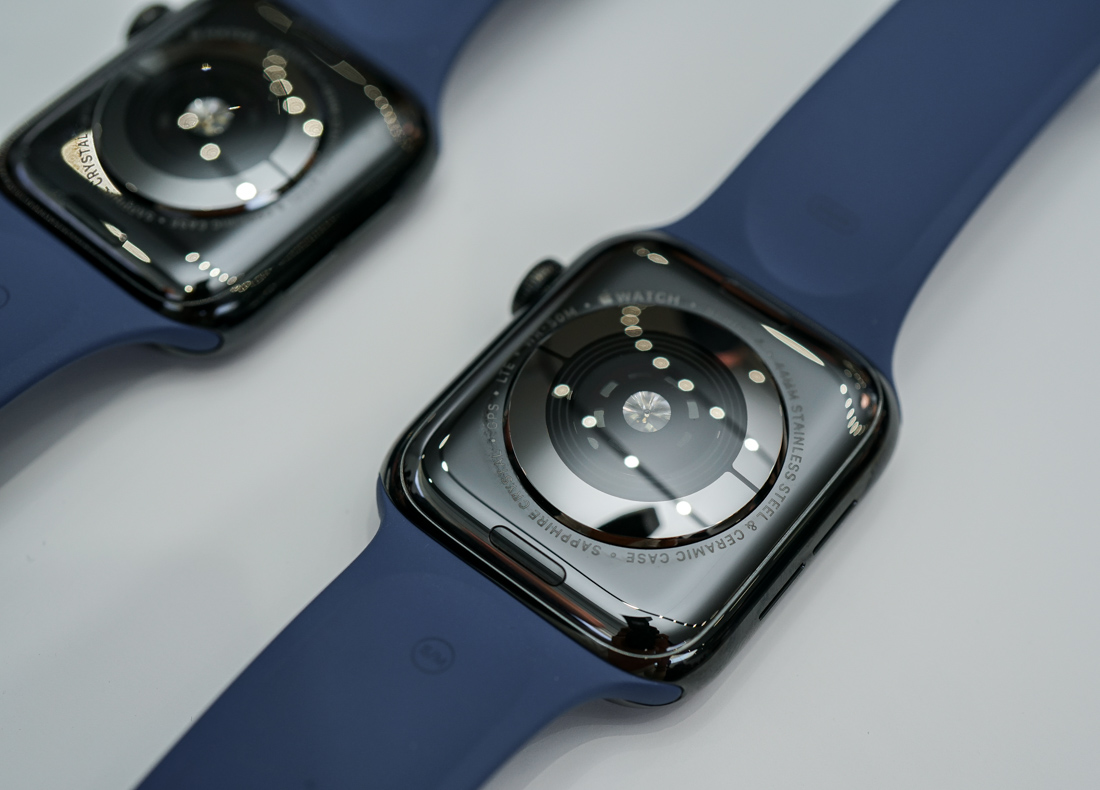 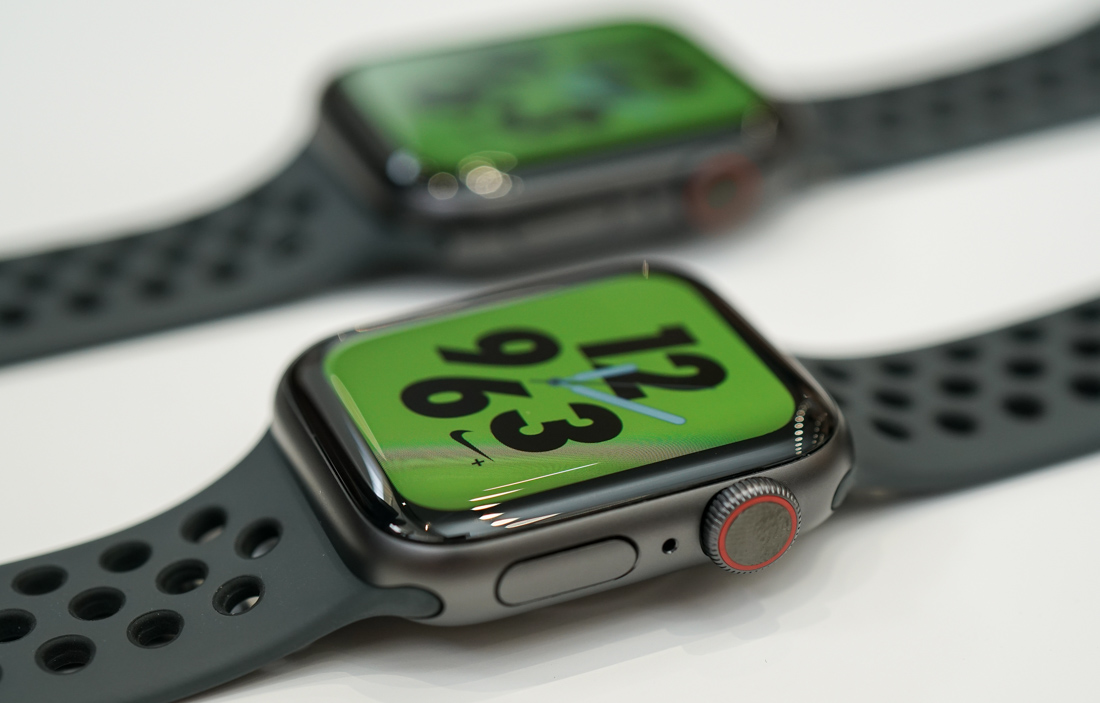 It’s potentially big news, as the data can yield insights into the wearer’s long-term heart health, and help analyze abnormal rhythms, identify congenital heart conditions, or help better predict a potentially life-threatening cardiac event, without necessitating repeated and costly trips to a doctor’s office. Despite a warm blessing from Ivor Benjamin, president of the American Heart Association, whether or not unleashing a do-it-yourself ECG into a world of WebMD-bred hypochondriacs is a good idea remains to be seen. 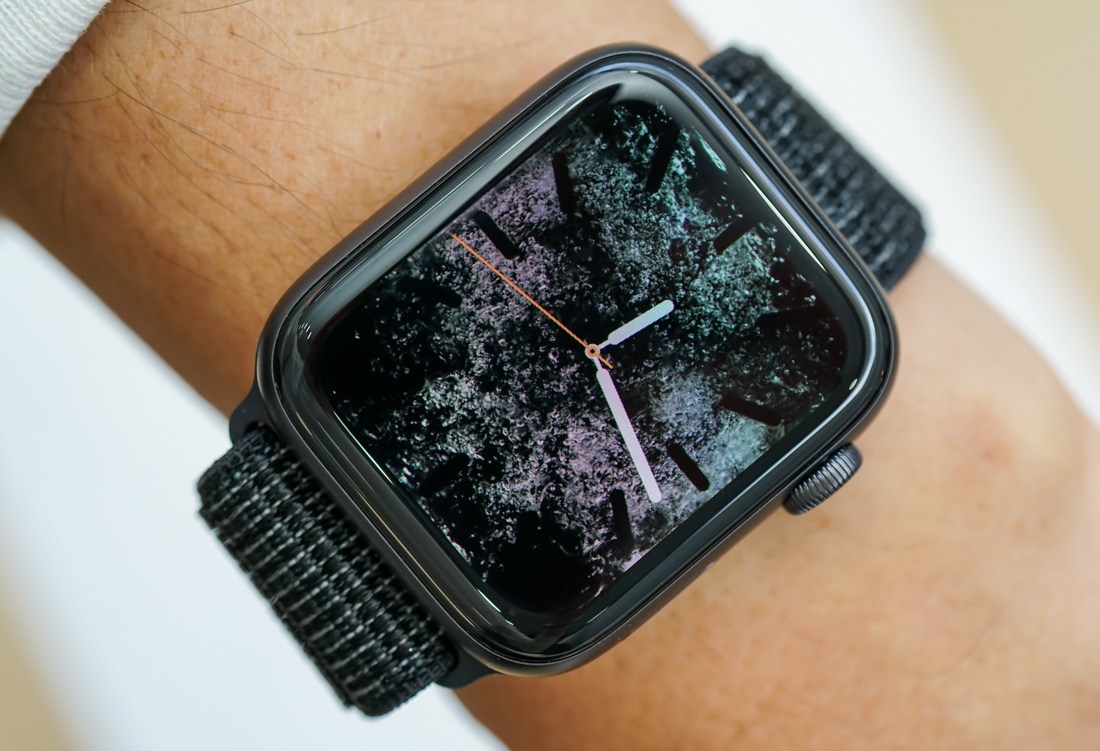 The central role of the ECG in not just the Keynote, but the overall focus of the Series 4 seems to be part of a generational pivot of sorts for the Apple Watch, as it starts to distance itself from generic “fitness tracking,” to “health” as an industry-leading medical device for the masses, the latter of which arguably has a greater audience impact. No longer does the watch say “if you wear me you’ll be more active,” but instead “you need me to live longer” – a marked difference when identifying how the product seeks to truly influence its target audience. This positioning also carries with it a much more persistent need – particularly for the 3 to 6 million Americans affected by some type of atrial fibrillation (according to the CDC). 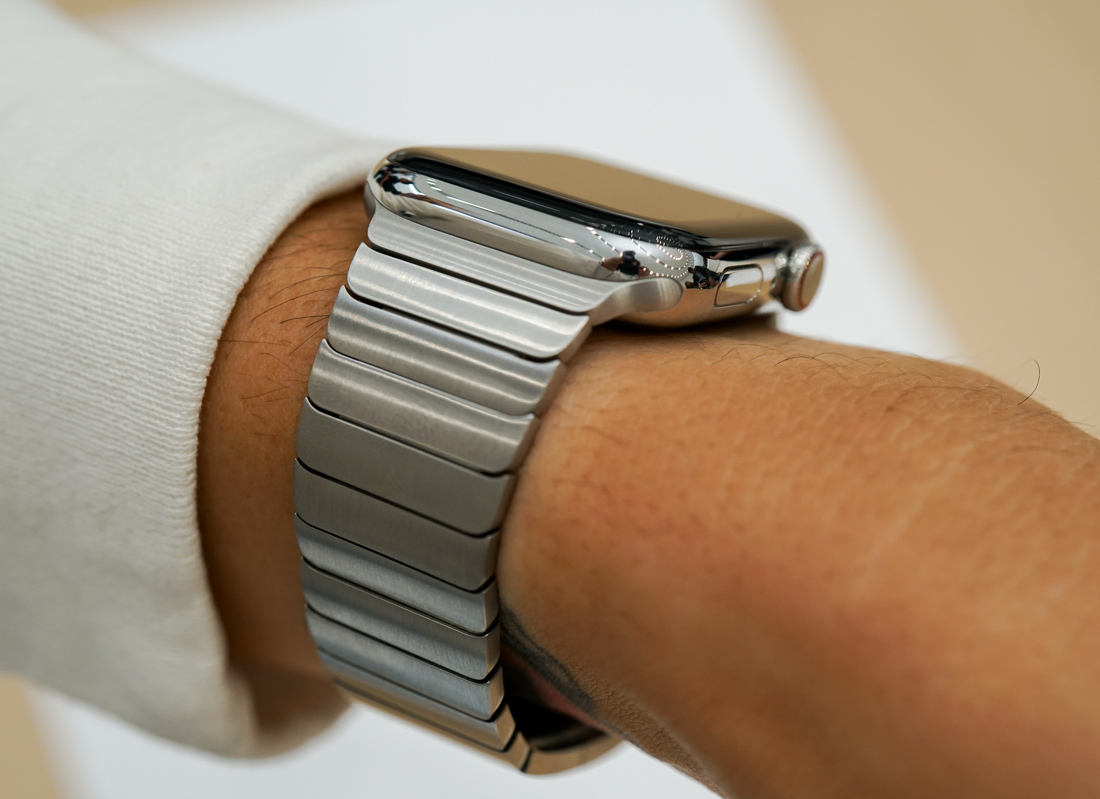 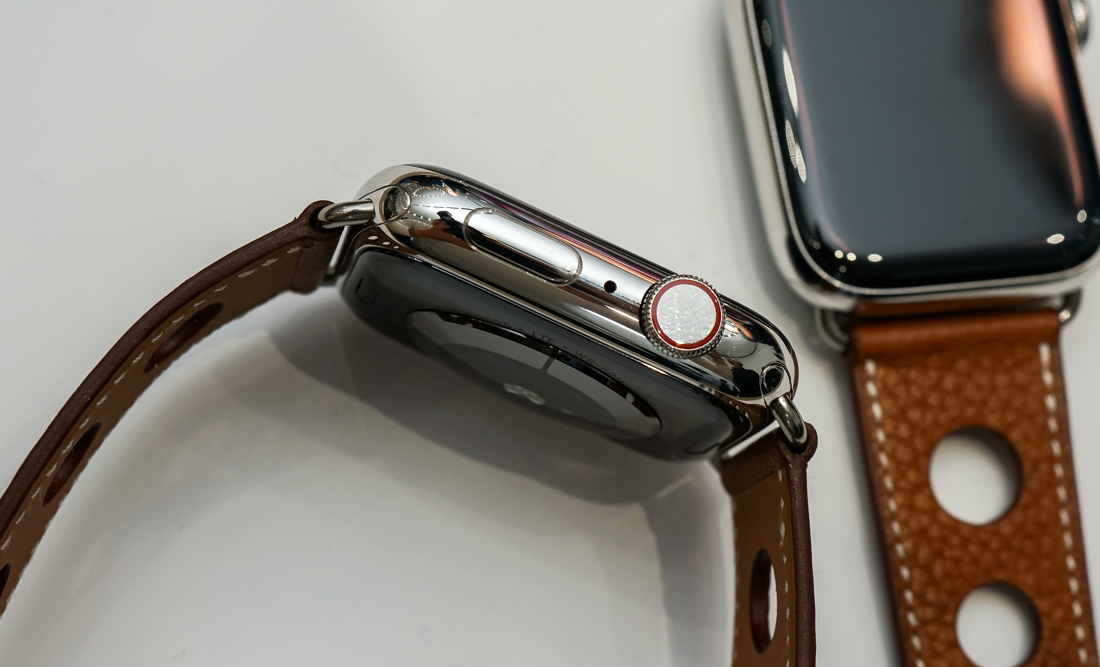 There’s one physical distinction on the Series 3 that’s notably absent on the Series 4, which potentially reinforces the sea change of intent for the device also signaled by the role of the ECG functionality: the red branding on the digital crown has been completely minimized to a thin red ring. Now, it might not seem like much to kill an aesthetic detail, but this was the one clear visual identifier that the wearer had purchased the most advanced Apple Watch to date, and potentially the most interesting thing about the Series 4 watch. Gone are any indicators of status or emotion; no solid red crown, no ultra-luxe precious metals, no ceramic Apple Edition, all of which were designed to appeal to a very certain type of consumer – coincidentally, the types of consumers who also buy luxury mechanical watches not for “need-states,” but for “want-states” like status or emotion. These watch enthusiasts are generally the same consumers who’ve long taken offense to the Apple Watch’s existence, whose only real crime has been the unfortunate one of being called a “watch.” 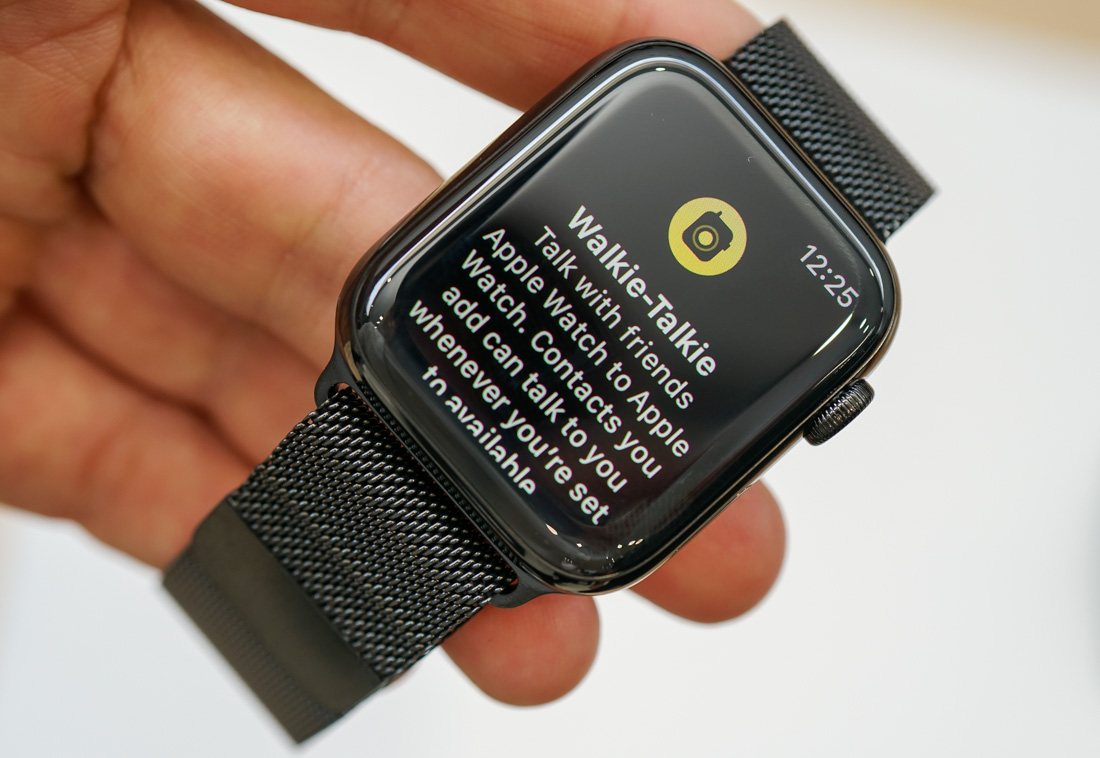 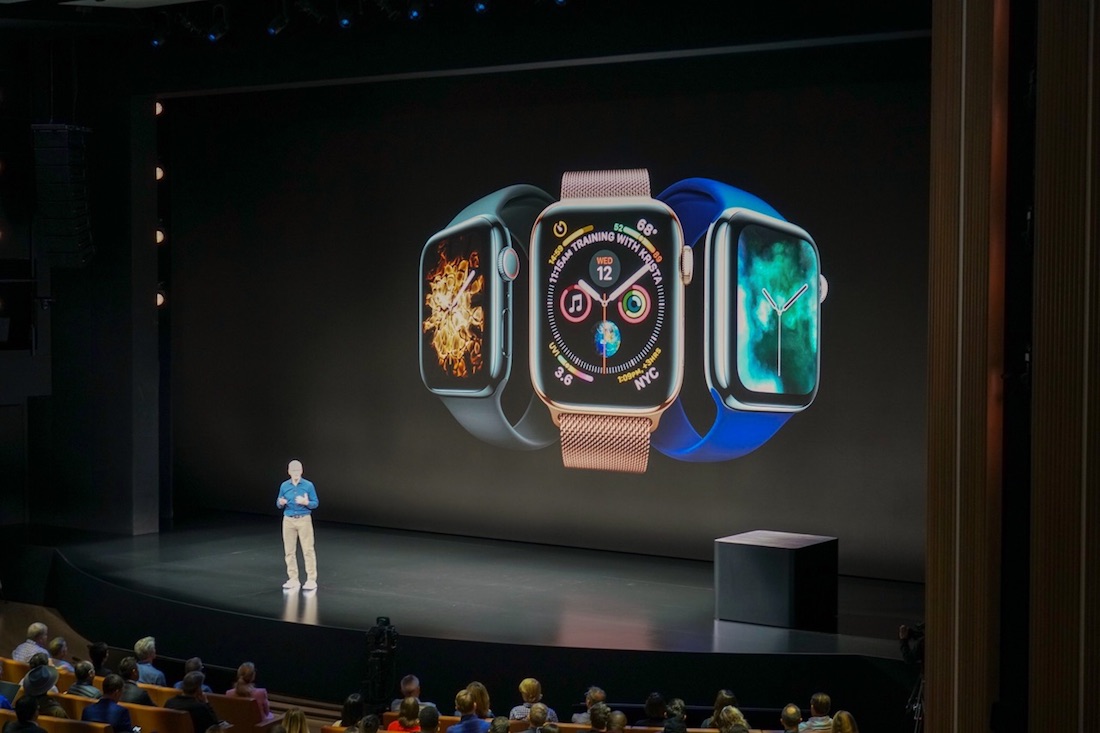 Ultimately, Apple’s fourth attempt to revolutionize how we interact with technology wasn’t what Tim Cook or COO Jeff Williams explicitly laid out in the keynote, but what went un-said, as the Apple Watch continues to explore its own identity not in the hearts, but in the minds of consumers. The long-term health monitoring benefits trumpeted in the Keynote were meant to push the Series 4 from a “want state,” to a critical “need state” – implying that with one, a wearer could not only communicate and work more effectively, but actually live longer in an increasingly persistent digital world. In Apple’s mind, the Series 4 is no longer a watch in the same way the new iPhone XS Max is pretty much everything but a phone. 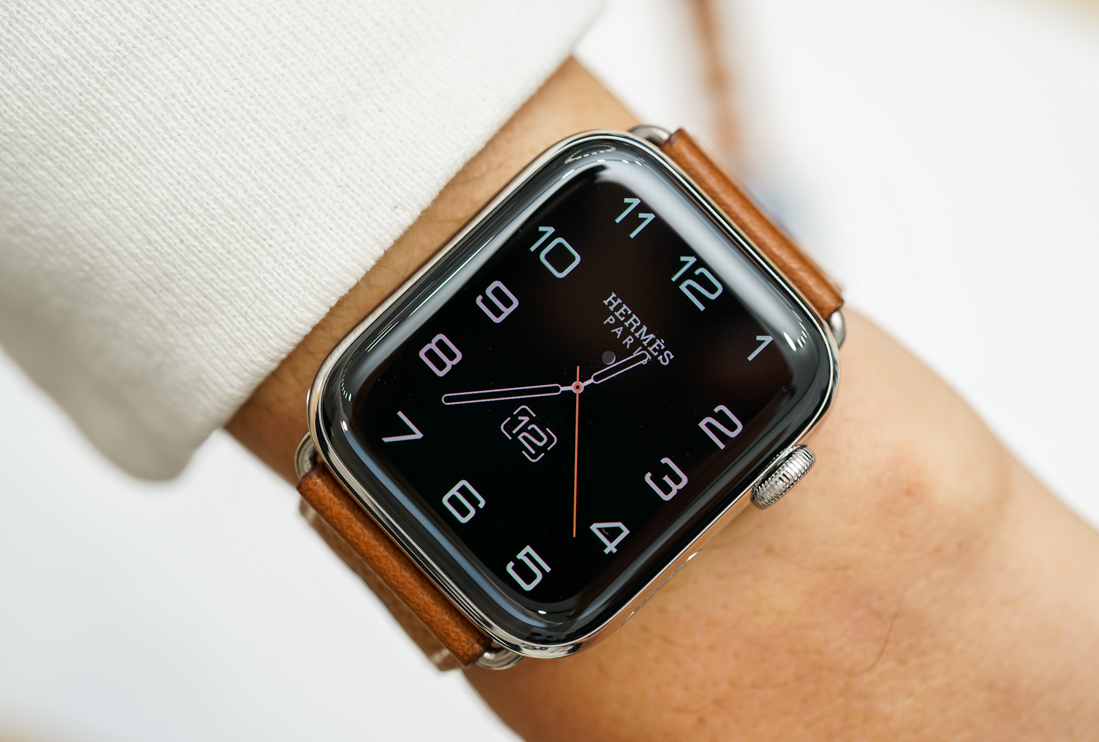 Analog purists who’ve railed against the Apple Watch in the past should take solace in the fact that the Series 4 feels far less like an identity object that appeals to one’s emotions in the same way as a mechanical watch, but rather an object designed to appeal to a distinct need – as in, you need to look at your phone less, you need know your heart’s health, your loved ones need to know if you’ve been injured in a fall (bicycle, motorcycle, electric skateboard, stairs, etc.). Regardless of whether or not this might represent thinly veiled altruism (a first for Apple, for sure), arguing over whether or not the Apple Watch is actually a watch is beyond a moot point – yes it tells the time, and yes you wear it on a wrist that might otherwise be occupied by a mechanical watch, but good thing wrists tend to come in pairs. apple.com