I recently discussed the standard Archimede Pilot XL Automatik watch here, for which there is a manually would analog, that has a subsidiary dial. A lot of you mentioned liking the good looks, fine iteration of the pilot watch look, and of course the reasonable price of $650. For those of you who are looking for a bit more, well here is something a bit more special with everything you liked about the original watch with a super nice movement. This is a version of the manually would model of the Pilot XL and has a subsidiary seconds dial. In all its German goodness it has a Swiss movement. Not just any ETA movement, but a “TOP” grade one. What does this mean though? 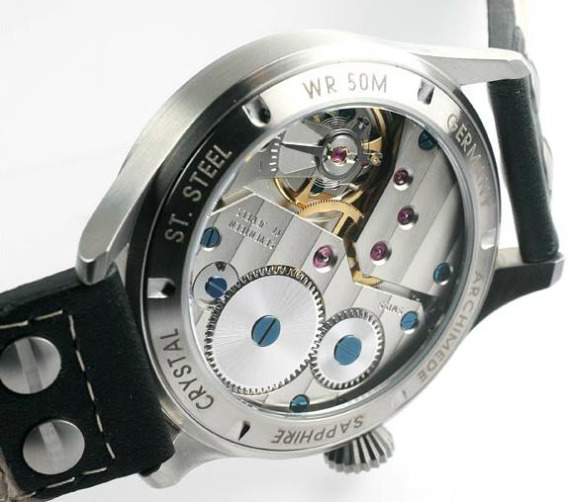 Well most ETA movement arrive in various grades. Take for instance this caliber 6498-2. There is a basic version, and maybe a few until you get to the top. The highest level one uses the best parts and is nicely decorated. All this decoration ends up making the same movement much better, and multiplies the time production significantly. The second you are unsure about this you need just flip over the watch and admire the movement through the large decorated sapphire caseback window. You can in the image the blued screws and Cotes de Geneva polishing on the surfaces.

Archimede was able to get a few of these these movements, not sure how many though. The TOP movements also have Glucydur balance wheels, Nivarox mainsprings and hairsprings, and an Incabloc shock protection system. The movement is more accurate than the more basic versions, and has a longer power reserve of 50 hours. I mention this to show you how it is a bit more than a mere cosmetic upgrade. The rest of the specs should be the same as the standard Archimede Pilot XLH (“H” stands for handwinding). There aren’t many of them, and the price is $1,070 each.