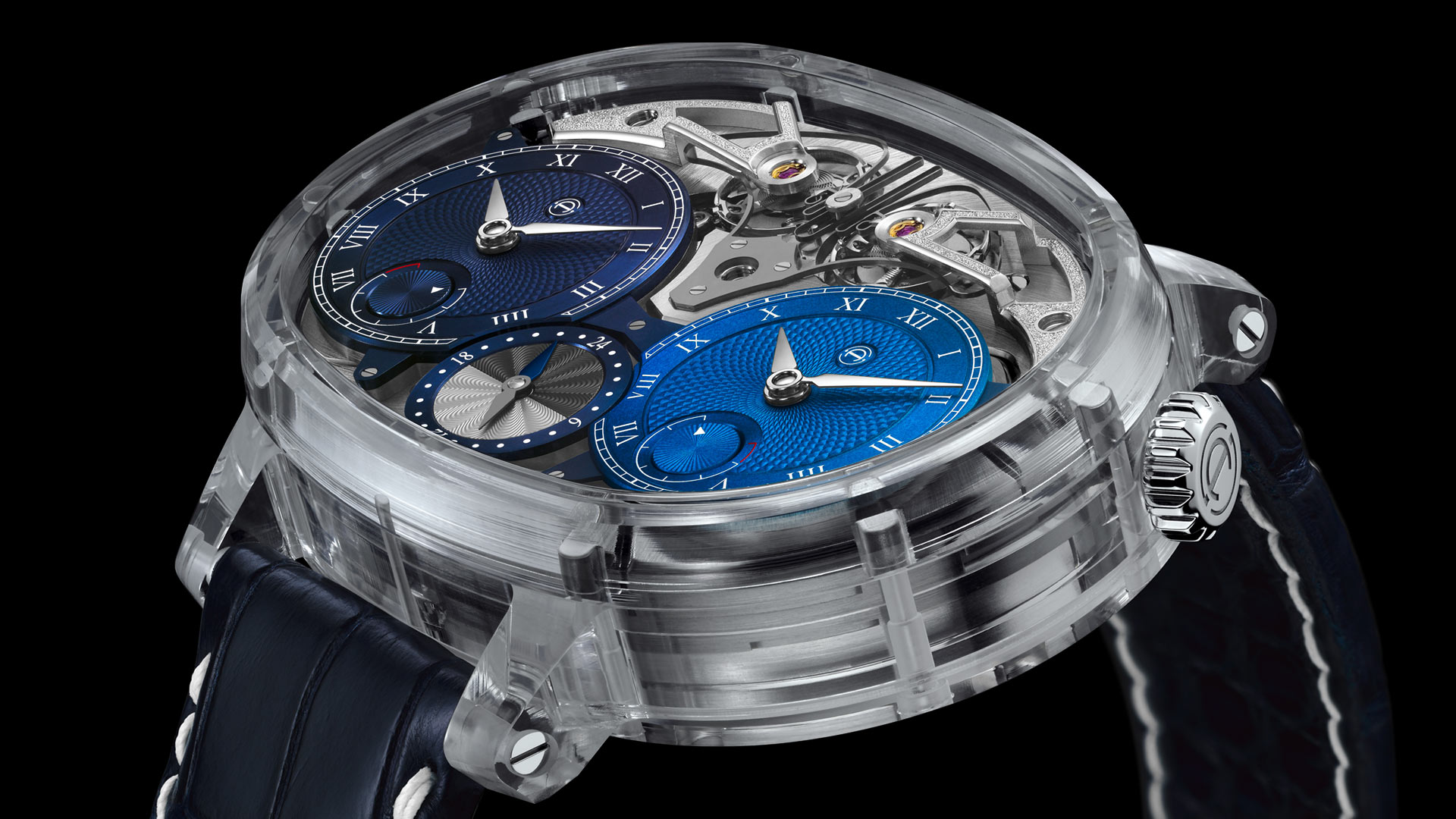 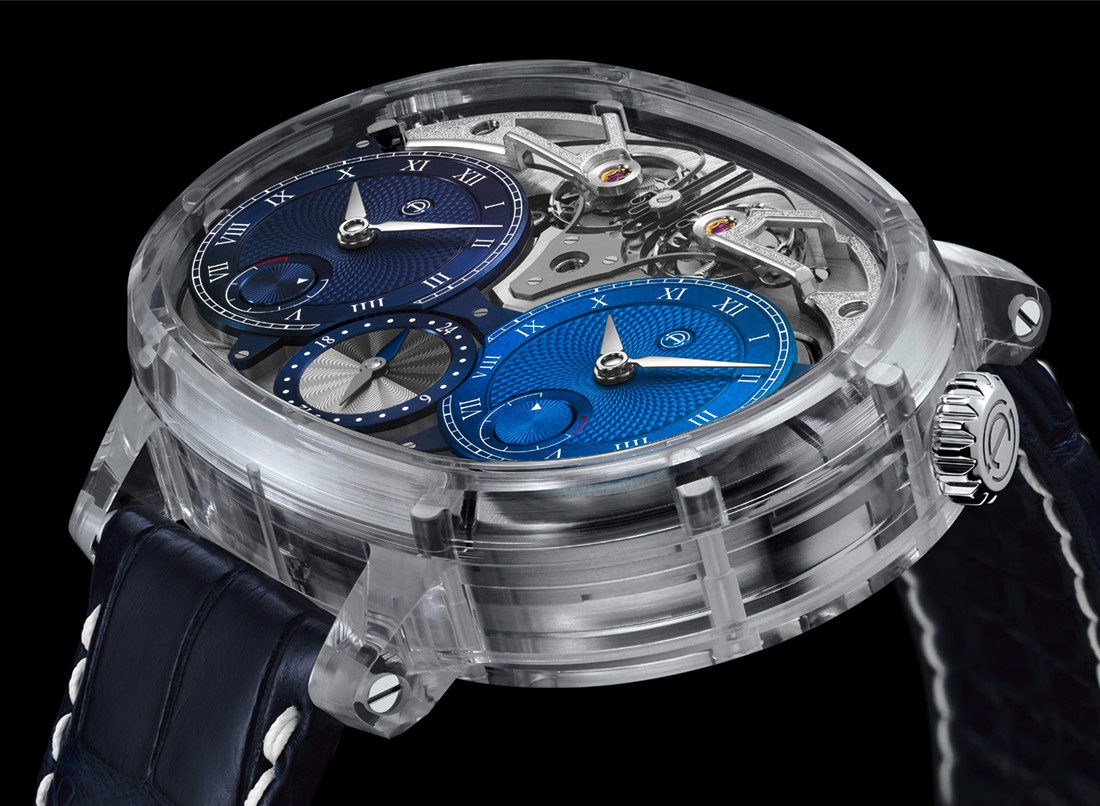 Transparency is often a good thing. In regards to manufacturing and business operations, few would turn down the chance to learn more about how the industry functions behind the scenes. When literal transparency creeps into the products themselves, however, reactions are often more divided. SIHH 2019 sees the Armin Strom Dual Time Resonance Sapphire watch released. A highly complicated, extremely limited timepiece that builds on previous research into resonance as a route to isochronism, this latest model is sure to split opinion with its unusual appearance.

It’s not the first time we’ve reviewed a watch with a sapphire case on aBlogtoWatch. We expect this kind of material experimentation from brands like Hublot or Bell & Ross. We recently reviewed the Hublot Big Bang Unico Magic Sapphire here, for instance, and Bell & Ross released the Bell & Ross BR-X1 Skeleton Tourbillon Sapphire Watch in 2017. And there are more examples. We’re more used to seeing Armin Strom experiment with new materials inside the case, hence the increased interest in this new piece. 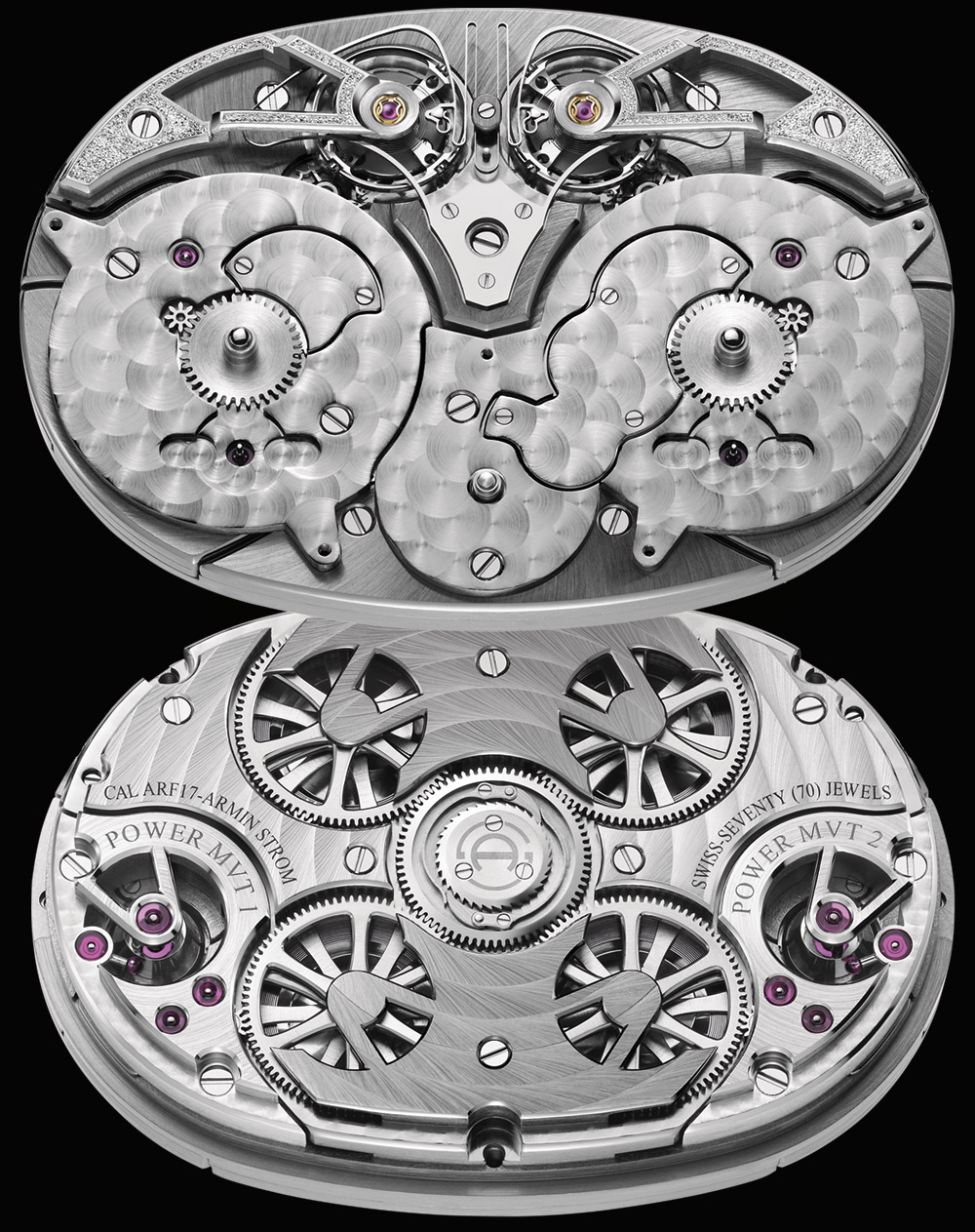 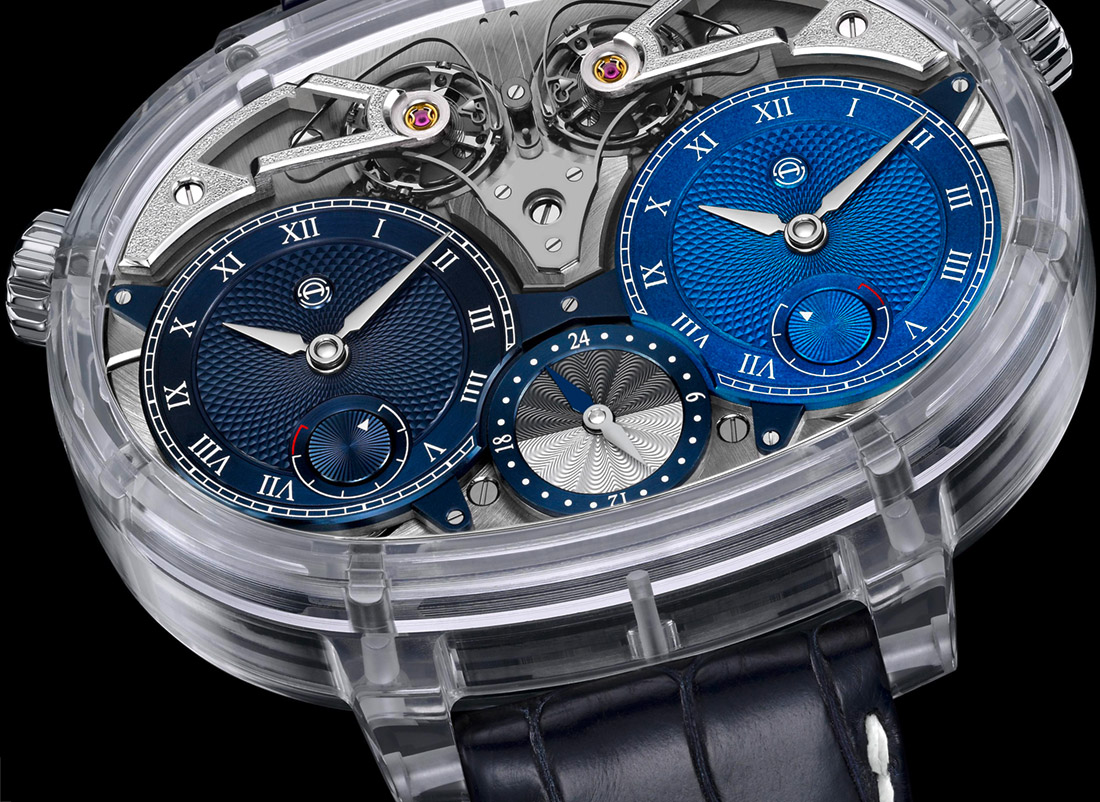 For me, the success of this model rests on the question of design congruity. The case, while not to my personal liking dimensionally, is well-executed and interesting. The dials are nicely finished and decorated with arresting shades of blue. Independently, there is no problem with either element, but combined the result is arguably jarring.

Armin Strom is trying to merge the best of both worlds: employing classic, artisanal dial finishing, and fusing it with a case material that looks like leftovers from an abandoned Skynet prototype. I like my timepieces to be a bit more “whole hog,” and therefore prefer the precursor: the Armin Strom Masterpiece 1 Dual Time Resonance watch. The black dials add a much needed dash of grit to proceedings that, in my opinion, marries better with the ice-cool sapphire case. 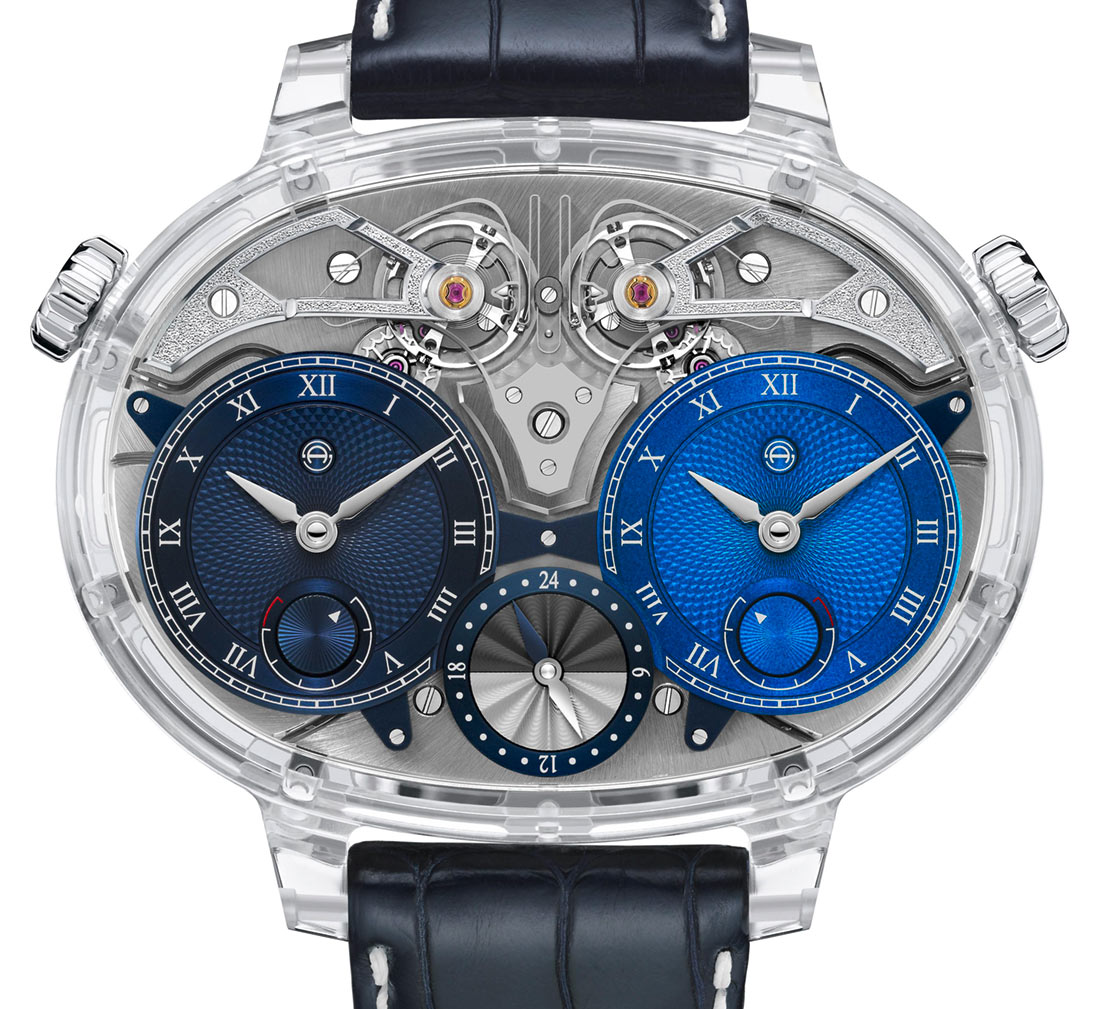 Maybe it’s harsh to focus on the aesthetics, when this watch’s horological credentials are so impressive. Boasting two movements, displaying two separate time zones, with each movement’s power reserve independently indicated, the Armin Strom Dual Time Resonance watch experiments with resonance to improve chronometric accuracy. The two movements are linked by a resonance clutch, which effectively irons out the slight erraticisms of each movement, acting like a tourbillon, but split across two balances. 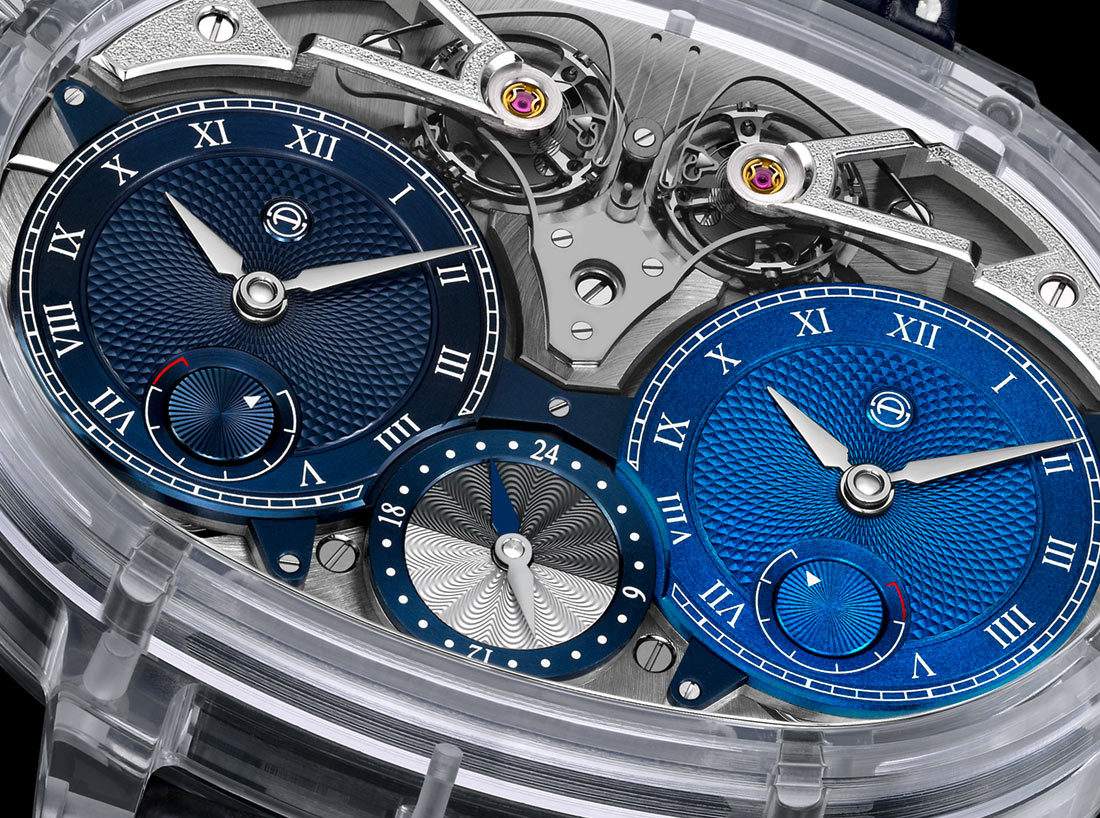 It is intriguing stuff – an old idea well-executed with modern materials. At 59mm wide, this watch will have a huge amount of wrist presence, but will likely wear as comfortably as similarly sized and shaped watches such as the also horizontally long HYT H3 which you can see on the wrist here. If you want one you’ll need to be quick, because there are only eight pieces of the Armin Strom Dual Time Resonance watch being made, and each one retails at a whopping price of CHF 280,000. Learn more at arminstrom.com