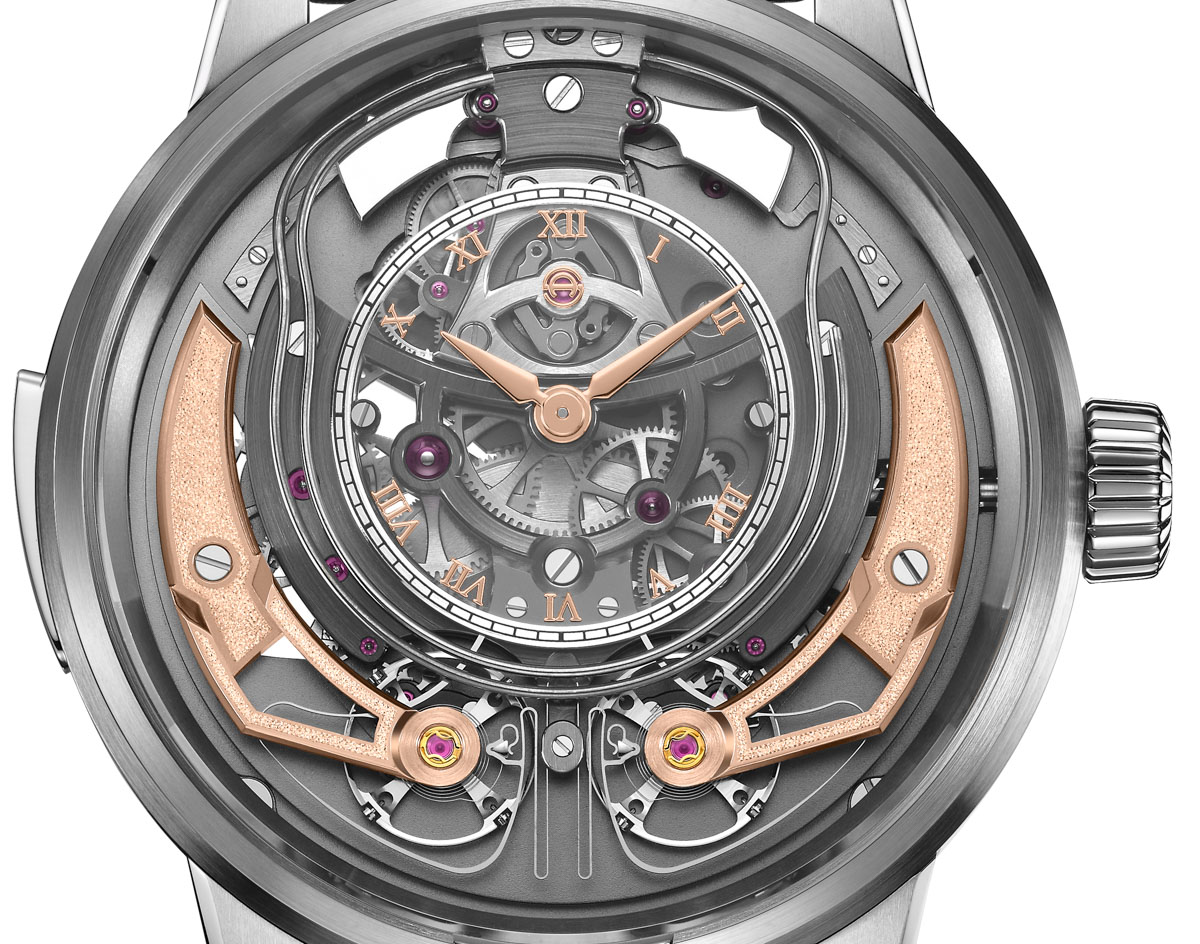 Announced as a 10th-anniversary celebration of the brand’s “integrated manufacture,” the Armin Strom Minute Repeater Resonance watch is a beautiful, intricate, and novel high-end collector’s watch of the type we love to fawn over. In this particular iteration, the Minute Repeater Resonance will be produced as a limited edition of just 10 pieces with a price per watch around $400,000 USD. Armin Strom seems to suggest that no more than 10 of this product will be made in any iteration. What makes the Minute Repeater Resonance watch stand out technically is that this is the first time a watch has incorporated both a minute-repeater chiming mechanism along with a dual-escapement resonance system.

Swiss Armin Strom began its journey into the weird world of resonance-based watches several years ago with the Armin Strom Mirrored Force Resonance watch (aBlogtoWatch hands-on here). At the time and still today, Armin Strom was one of a tiny assortment of watchmakers to even attempt making a resonance watch. Others include watchmakers such as Philippe Dufour and F.P. Journe. More recently, Armin Strom released the Dual Time Resonance watch (aBlogtoWatch hands-on here), which built on the concept by offering two distinct displays for the time, along with a bold-looking oblong case. Now for 2019, the resonance game gets truly upped with the addition of a minute-repeater mechanism. The movement inside the Minute Repeater Resonance was co-developed by Armin Strom and Le Cercle des Horlogers because it requires a lot of special skills to get a minute repeater done right. The achievement in this watch isn’t to overcome some previously failed hurdle, per se, but rather the artistic and technical integration of two very interesting mechanisms into one cohesive movement. Much of the effort in the Minute Repeater Resonance is related to the challenge of putting all of this into one attractive movement. For the Minute Repeater Resonance, Armin Strom returns to its classic round case design in a rather large 47.7mm-wide (and 16.1mm-thick) titanium case. Water resistant to 30 meters, the case also has a traditional sliding lever activator for the minute repeater on the side of the case. What I love about designs like this is that the viewing experience into the case is really of the movement itself — and the dial for the time is actually designed as part of the movement. This concept isn’t new, but it is visually different from the most classic look of a dial that is just a place to read information and the movement can be viewed from the rear. In a watch like the Minute Repeater Resonance watch, you really get to appreciate what a mechanical movement means for performance and what aesthetics can do for a luxury timepiece product such as this. According to Armin Strom, a good amount of the visual inspiration for the watch came from a 16th-century tower clock in Bienne, Switzerland, not far from the Armin Strom HQ.

Built using some 18k rose gold bridges, the caliber ARR18 is a fascinating and ultra-complex movement built from 408 parts. What I find interesting is that, according to Armin Strom, using a resonance system for the dual escapements allows for a 15-20% increase in energy efficiency. Most people think of resonance systems as being just about isochronism and accuracy, but energy efficiency is also one of the outcomes of this delicate-to-master system. This further allows the watchmakers to use just one large mainspring barrel, upon which most of the complications, such as the minute repeater, are built.

The outcome is 96 hours of power reserve (the movement is manually wound) operating at 3.5Hz (25,200 bph) — and the ARR18 movement includes a lot of unique systems such as the patented Resonance Clutch Spring that is necessary for this assortment of complications. That said, I would have loved for the watch to indicate the seconds — it only has the hour and minutes on the display. The minute repeater sounds the current time back to you in the form of chimes when the hammers hit the gongs. To briefly explain resonance in watches, the idea is that if you place two moving objects very close to one another, their “rhythm” eventually becomes harmonious and, thus, the same. The implication is that errors in timekeeping can be partially averaged out, as you have two resonant balance wheels that are affecting one another. Without a resonance effect, there would be nothing to help stop the accuracy-damaging effects of normal deviations that occur in a wristwatch (mainly due to things like gravity and environmental effects as wristwatches are never in stable positions or places).

Beautiful to look at, with a combination of modern industrial design and some classic hand-done finishing and polishing, the Armin Strom Minute Repeater Resonance is a gorgeous and intellectually compelling tour de force of horological engineering based on a deep understanding of what modern high-end timepiece collectors are looking for. Armin Strom has been increasingly adept at understanding its consumers and the market, and I do enjoy how the brand continues to define its particular interpretation of contemporary haute horology. Price for the limited edition of 10 pieces Armin Strom Minute Repeater Resonance in grade 5 titanium is 380,000 Swiss Francs. Learn more at the Armin Strom website here.