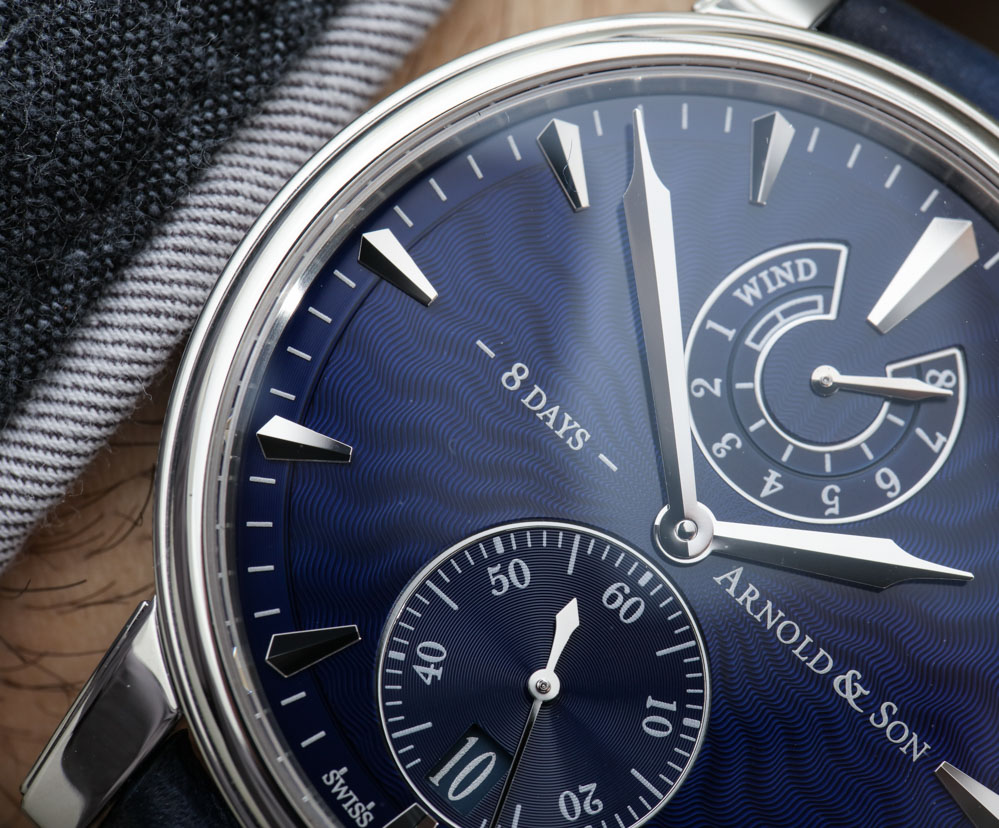 While it isn’t glitzed up with new technology or a fancy story, the new Arnold & Son Eight-Day Royal Navy is most certainly a sleeper hit of Baselworld 2016 with an attractive dial, good-looking and useful movement, and all-around decent price in three new steel-case models.

Arnold & Son isn’t shy about saying that the Eight-Day Royal Navy is their own personal entrant into the “marine chronometer-inspired” wrist watch arena. This segment isn’t super crowded, but other brands like Ulysse Nardin tend to have more years of experience in producing watches like this. With that said, if you look at the minor details, then you’ll notice that Arnold & Son is indeed bringing its own unique marine chronometer-style watch to the table with the Arnold & Son Eight-Day Royal Navy. 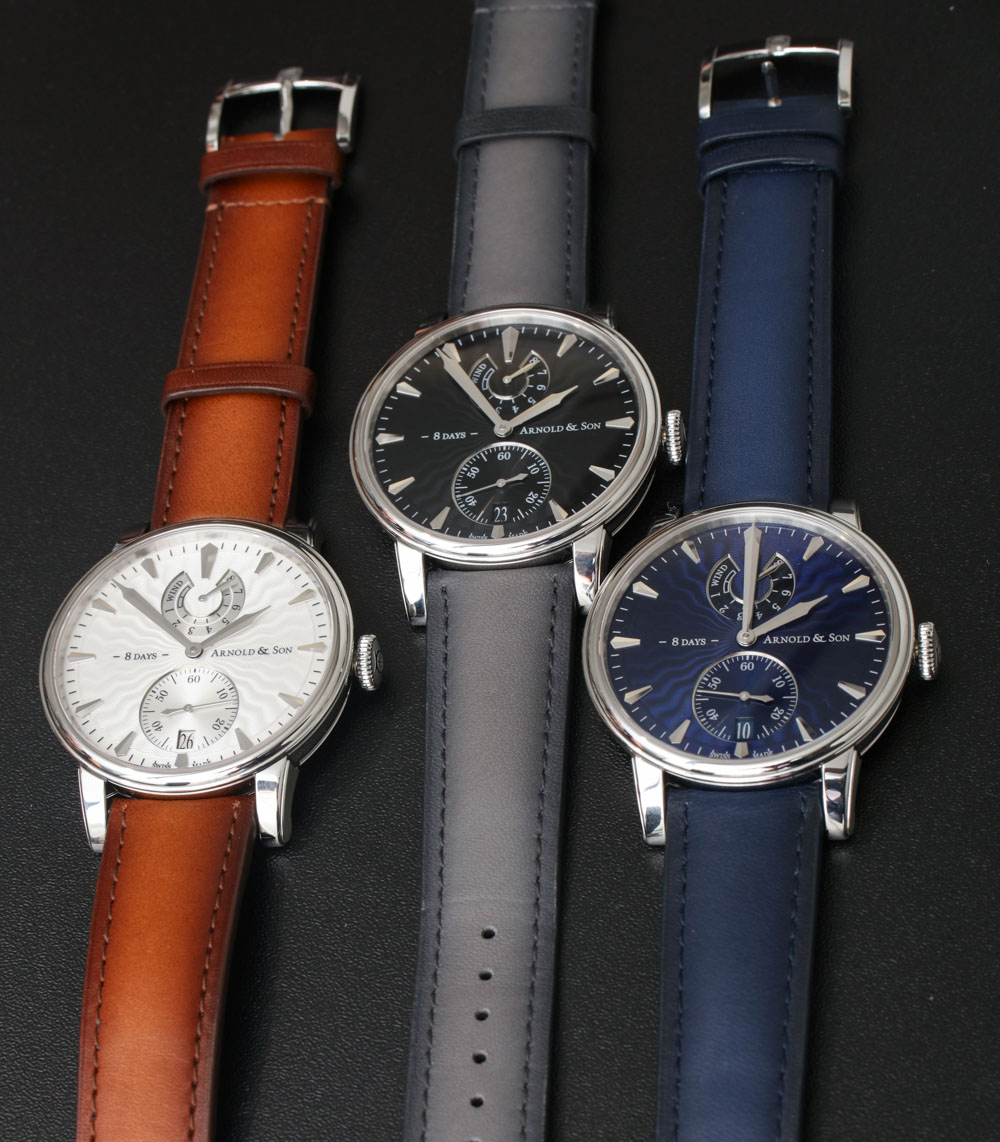 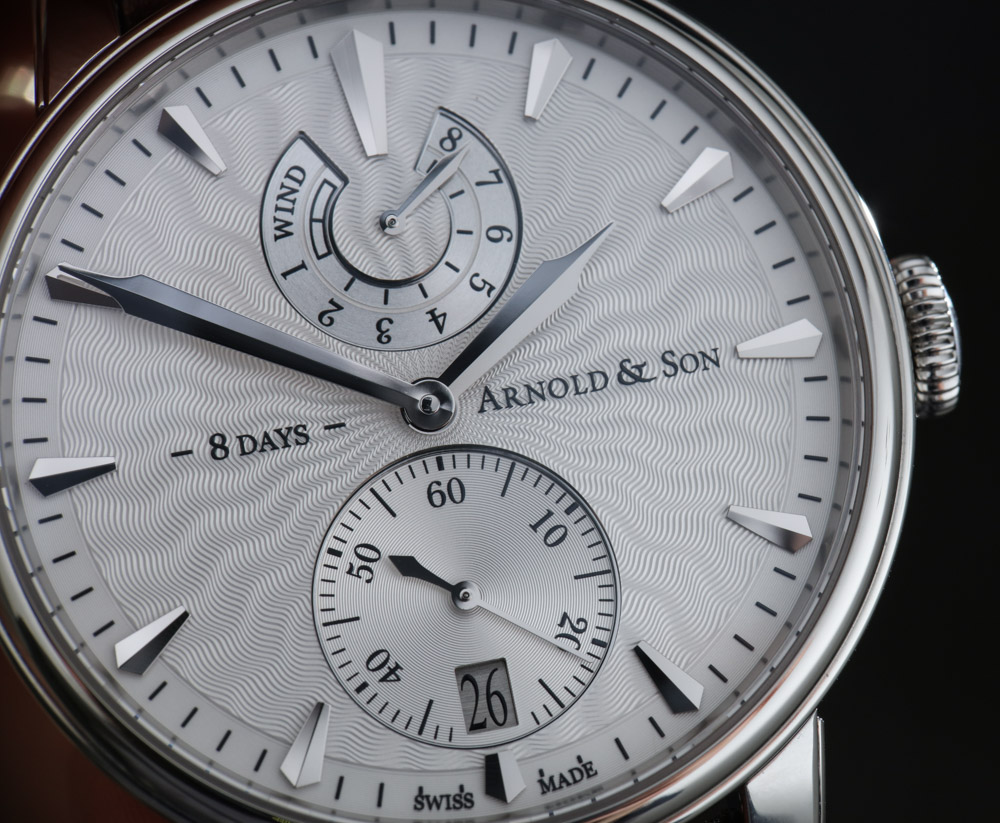 One of the most impressive things from an exclusivity standpoint is that Arnold & Son still produces under 1000 watches per year (about 800, last I heard) – and yet they are able to continually come out with new and interesting movements. This is, of course, due in part to their ownership by movement maker La Joux-Perret (which in turn is owned by Citizen). This gives Arnold & Son a unique access to people and machinery to do all kinds of crazy stuff like make a huge variety of movements, each in relatively small numbers – something most other brands of this size cannot enjoy. 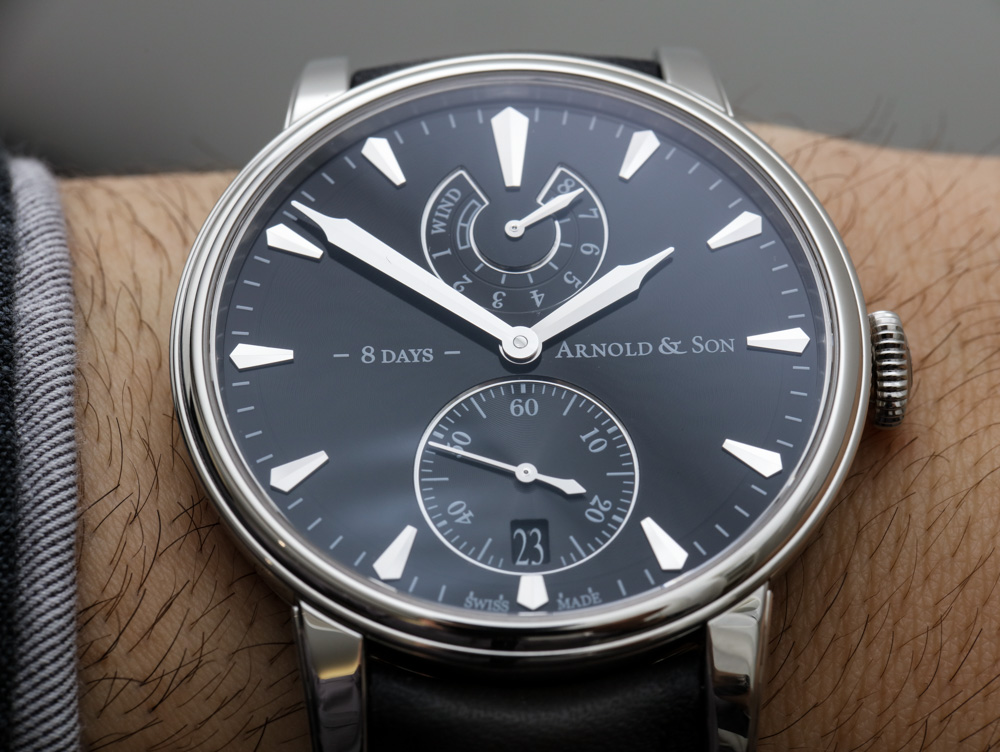 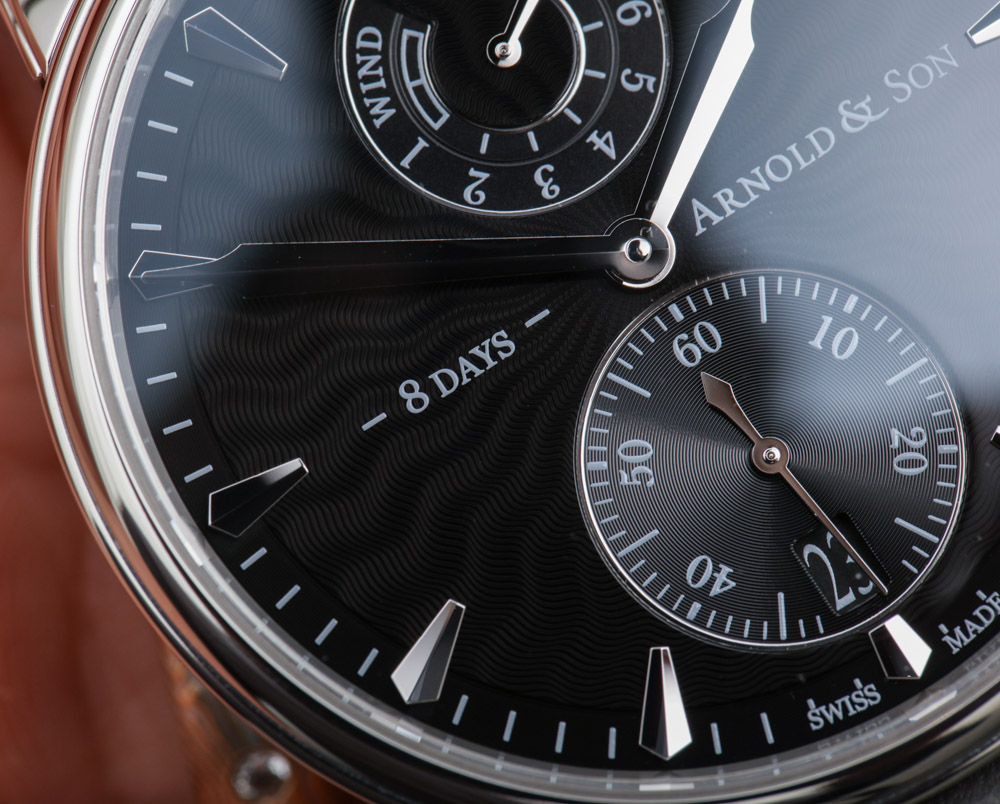 At 43mm wide (water resistant to 30 meters) in a deceptively complicated (yet refined) steel case, the Arnold & Son Eight-Day Royal Navy is also just 10.7mm thick with an expansive sapphire crystal caseback window showing off the new in-house-made manually wound movement (more on that in a moment). The dial layout is typical “marine chronometer” with the main dial for the time and a symmetrical layout for the power reserve indicator under 12 o’clock, and a subsidiary seconds dial over 6 o’clock.

What makes the dials really special is machine guilloche engraving which is then lacquered for color. The “squiggly line” style pattern (I’m certain that is how the French-speaking horologers of old would refer to them – “le squiggelle!”) are lovely and the dials of the Arnold & Son Eight-Day Royal Navy watches are offered in either blue, black, or silver… along with good-looking matching calf leather straps. 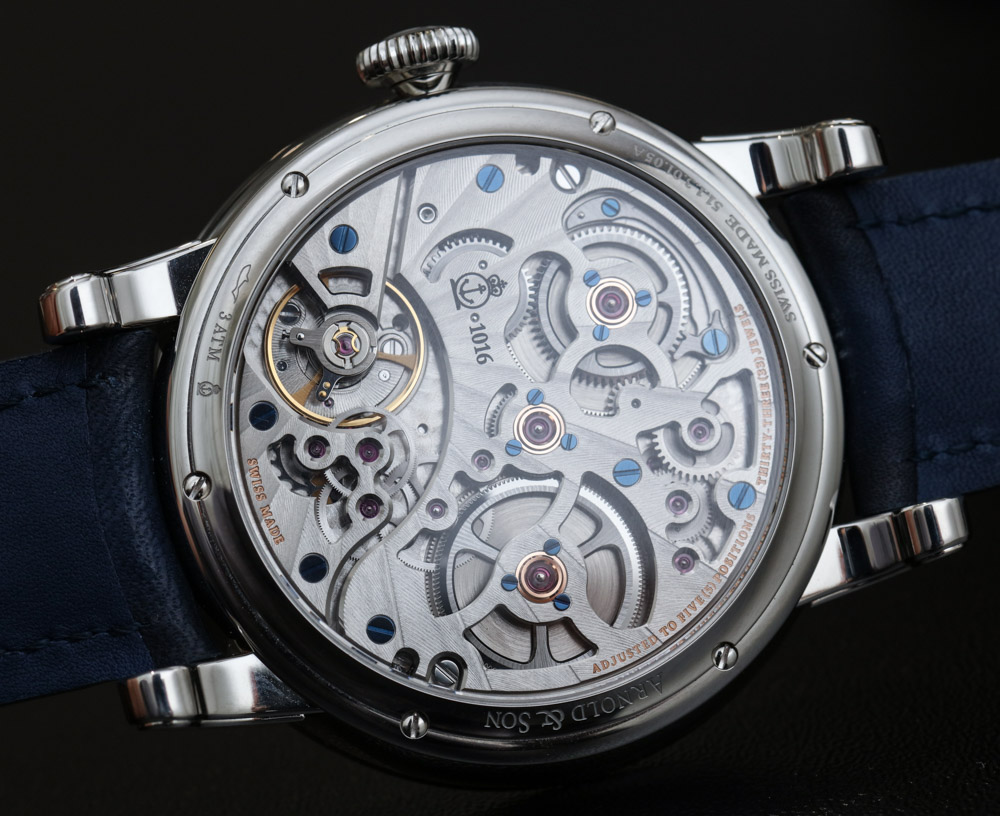 Legibility and sexiness is high on the dials which have, in my opinion, the right mixture of class and sophistication, as well as a tendency to grab attention. Strong yet traditional-looking hands add a sense of masculine purpose, and Arnold & Son was even able to insert a date indicator window into the mix (in the subsidiary seconds dial). 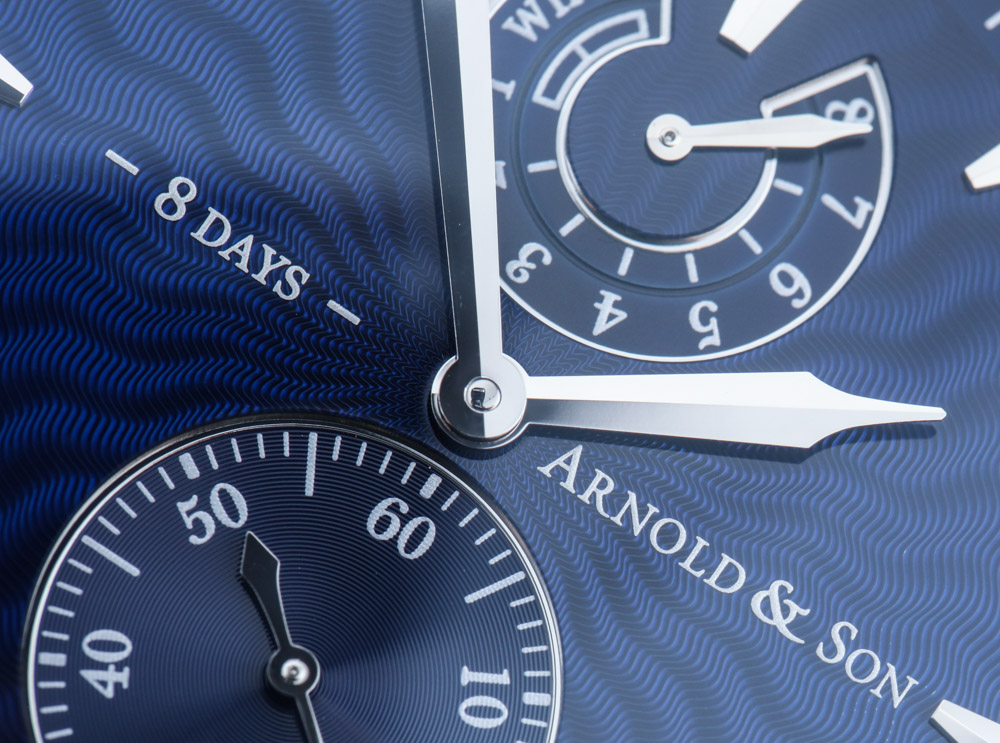 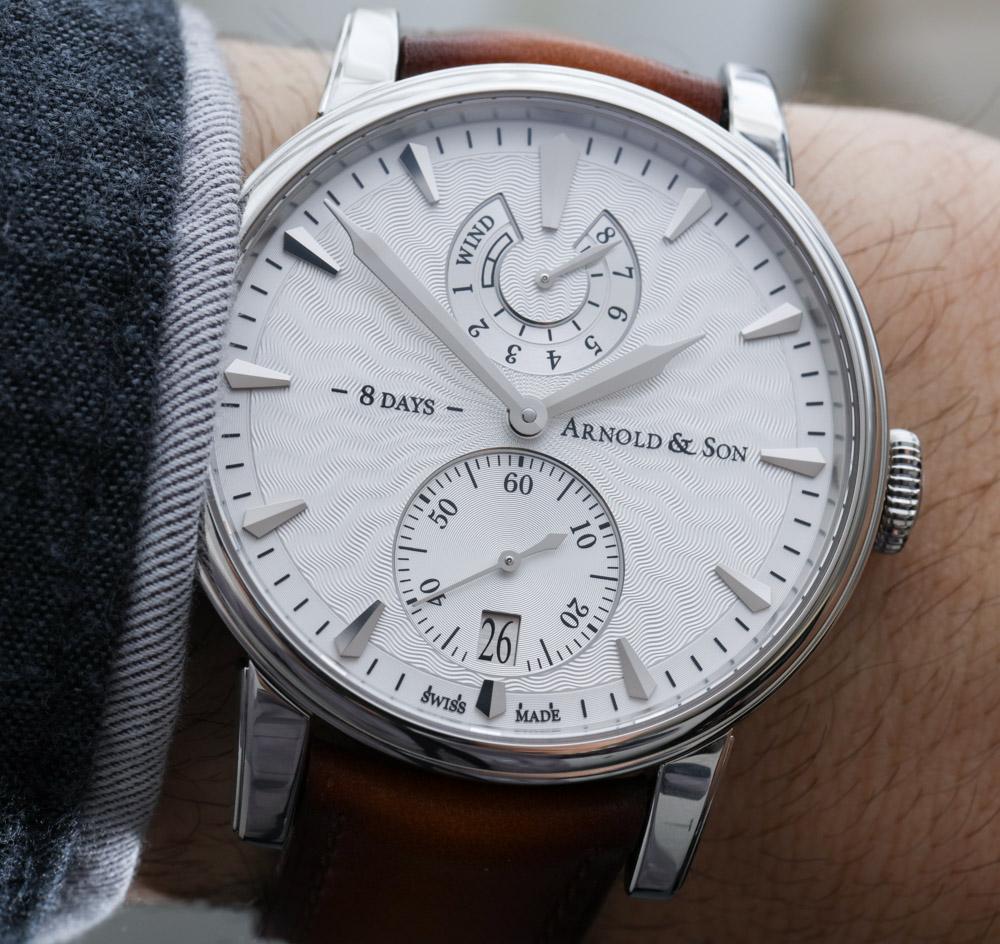 Arnold & Son is good about offering a lot of visual appeal to their movements, combining polished decoration as well as color through liberal use of blued-steel screws, gold chatons, and large synthetic ruby jewels. For the most part, the bridges are also “palladium-treated.” For the money, there is a lot of value here in terms of both visual design and functionality (not to mention that element of exclusivity I discussed previously). 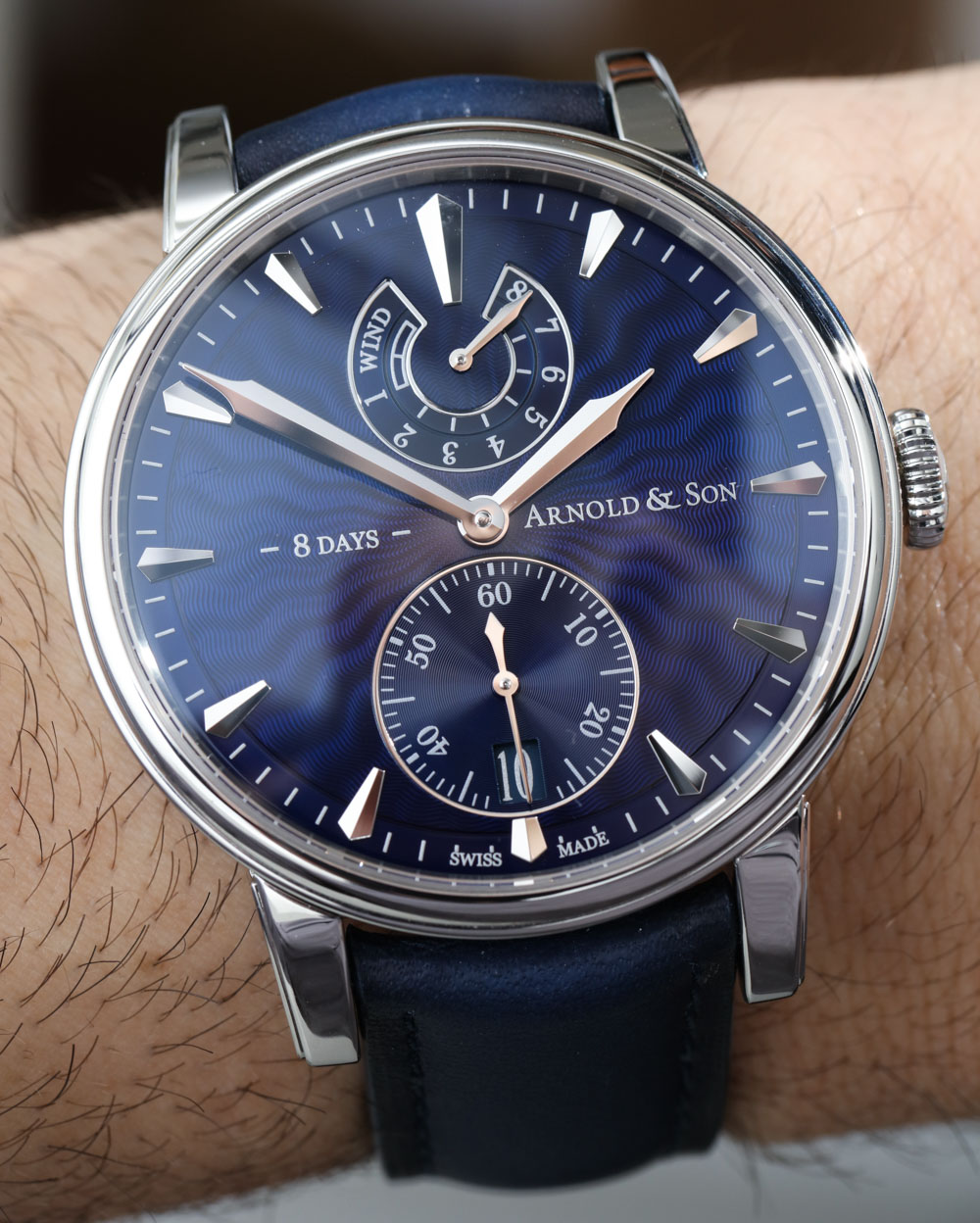