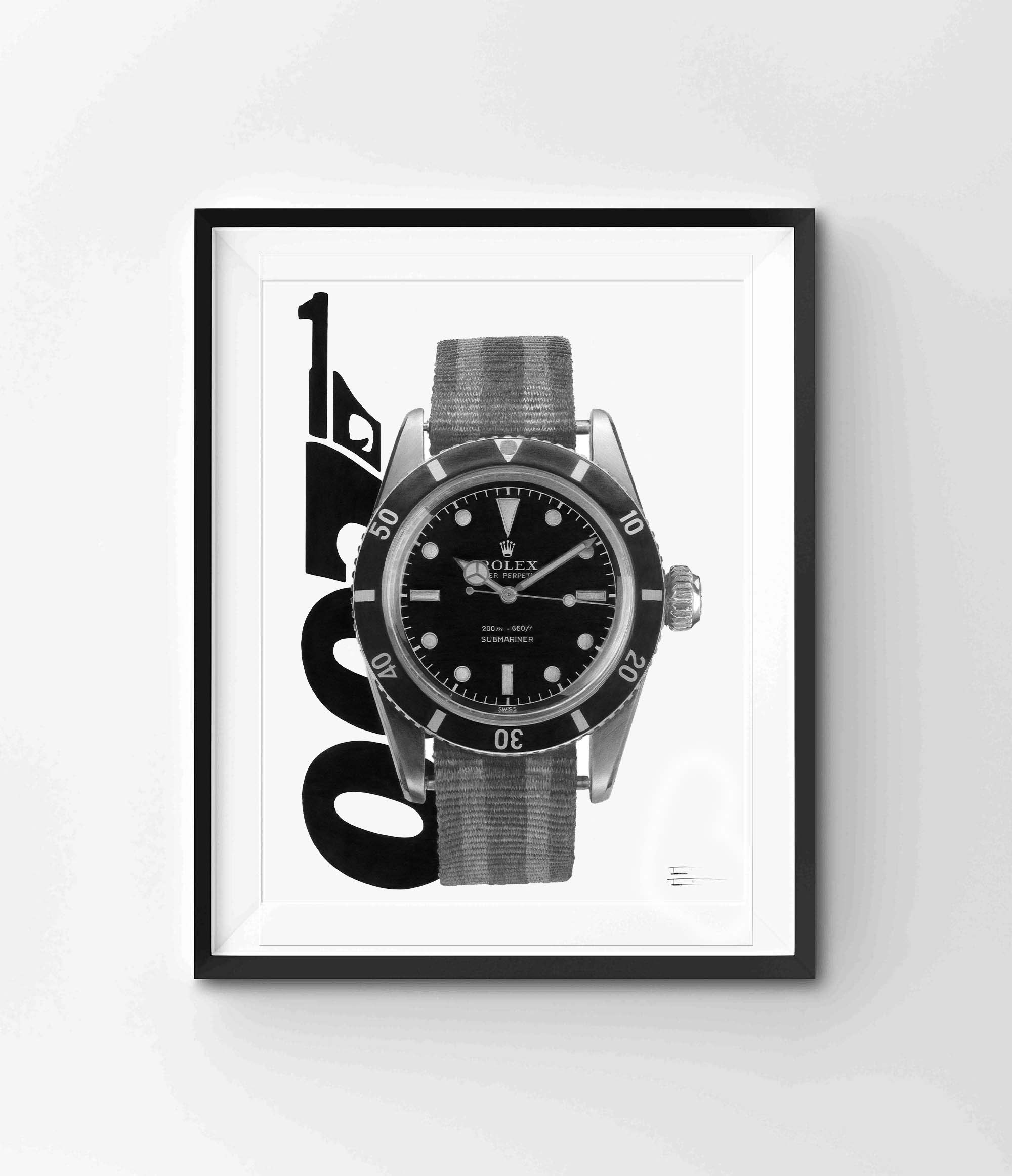 With the latest horological artwork available on the aBlogtoWatch Store, we pay tribute to three true icons of the 20th century: Sean Connery, the Rolex Submariner, and James Bond, i.e., Agent 007. The story of Bond’s Submariner is a rather mystical one, so paying homage to it required a combination of diligent research and creativity — making do with what we have on hand. We worked together with our featured horological artist to create the most accurate and, by every chance, the largest depiction of Connery’s Rolex Submariner reference 6538, making it available as a beautiful and affordable art print on the aBlogtoWatch Store. 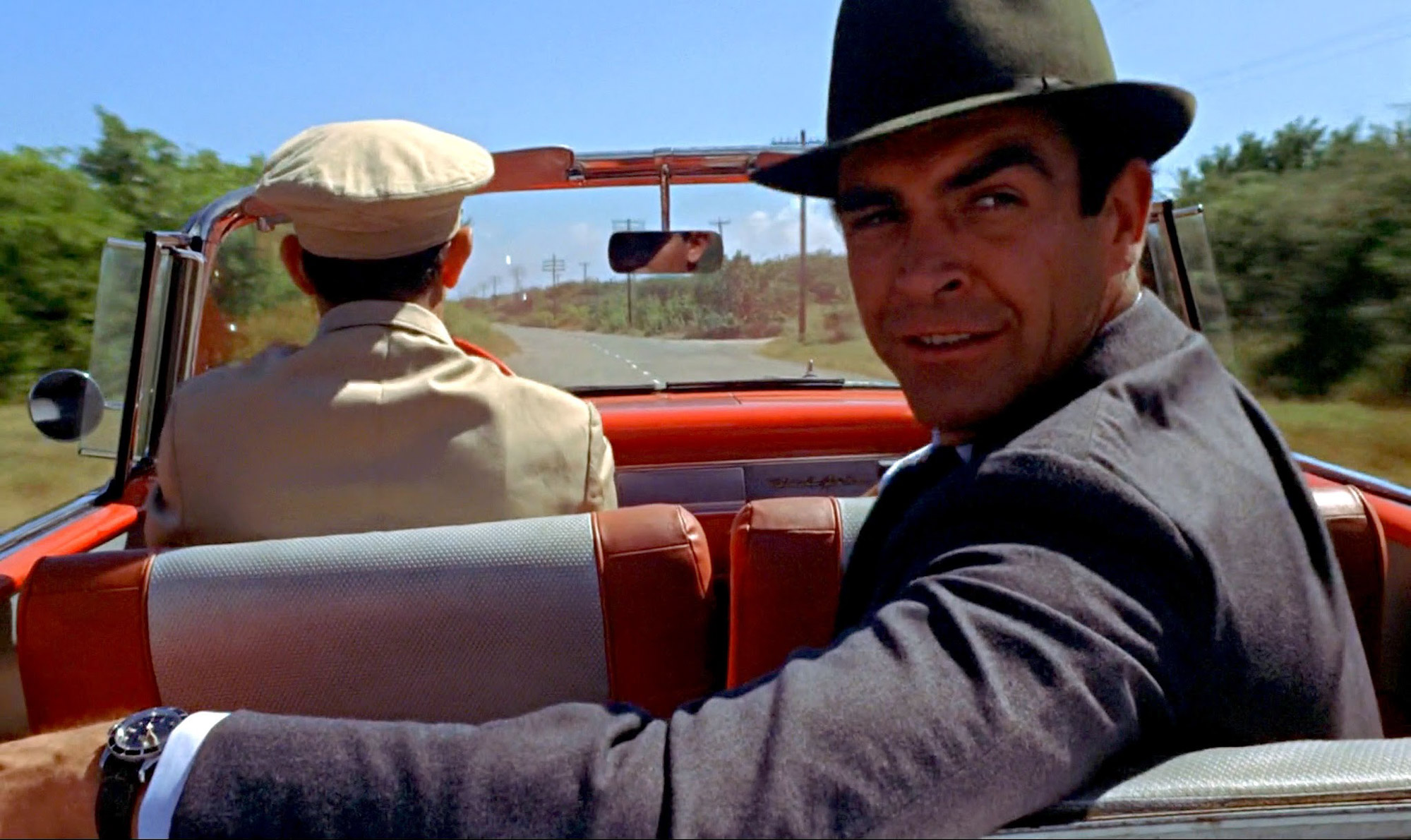 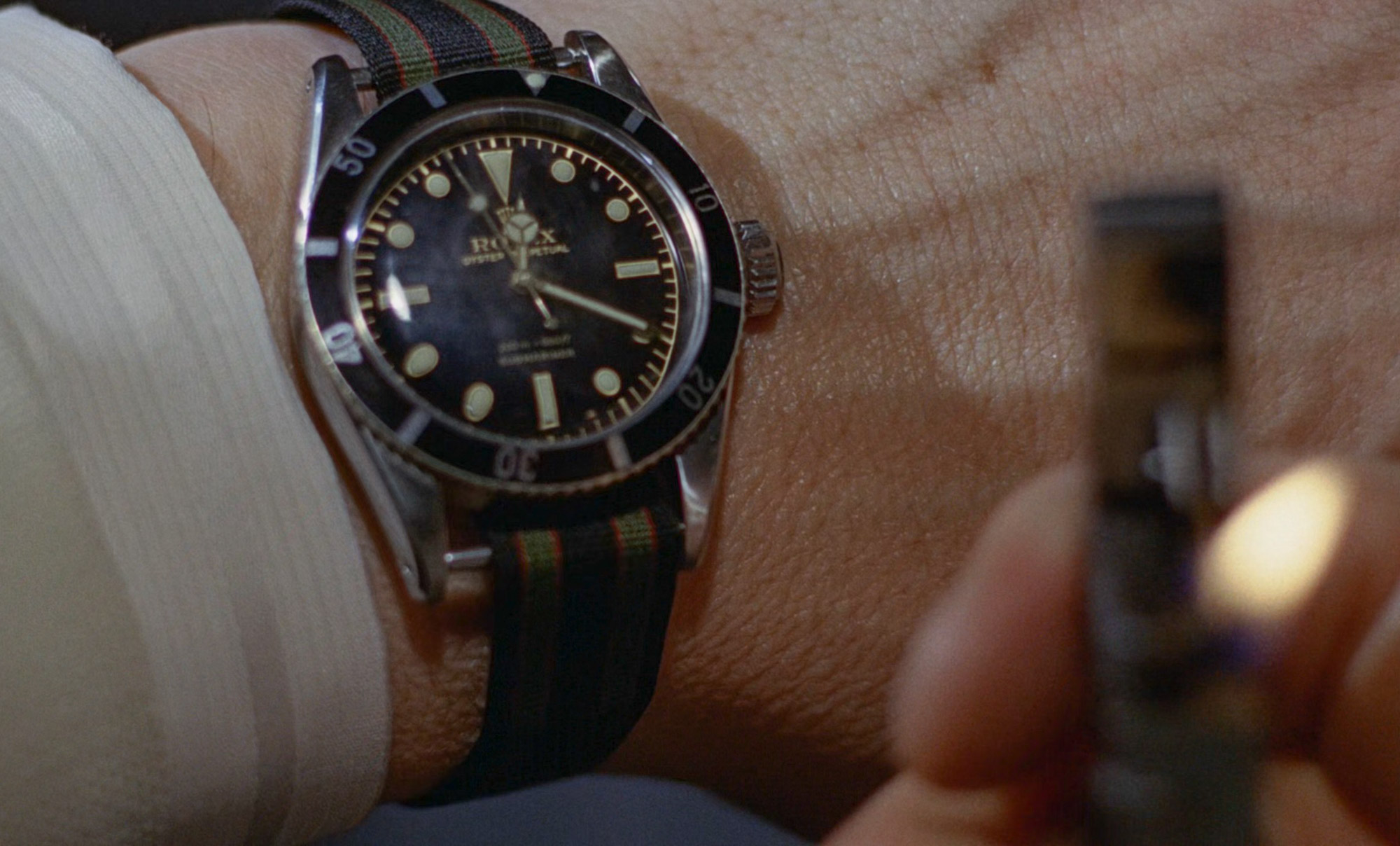 Easily identifiable as a “Big Crown” Submariner reference 6538, it ended up not on a traditional Rolex steel bracelet, but a Royal Scots government strap – as discussed by Jake’s Rolex World: Its formal color names are Peony Red, Gosling Green, and Oxford Blue. The Royal Scots, also known as “The Royal Regiment,” is the oldest British Army Regiment, founded in 1633 by Sir John Hepburn by a Royal Warrant from King Charles I, who recruited 1,200 men in Scotland. The incredibly loose fitment of the strap just further added to the controversy of this choice: a 16mm-wide belt strap against a 20mm lug distance. Still, this too has added to the unique and bespoke nature of Bond’s choice of watch at the time. 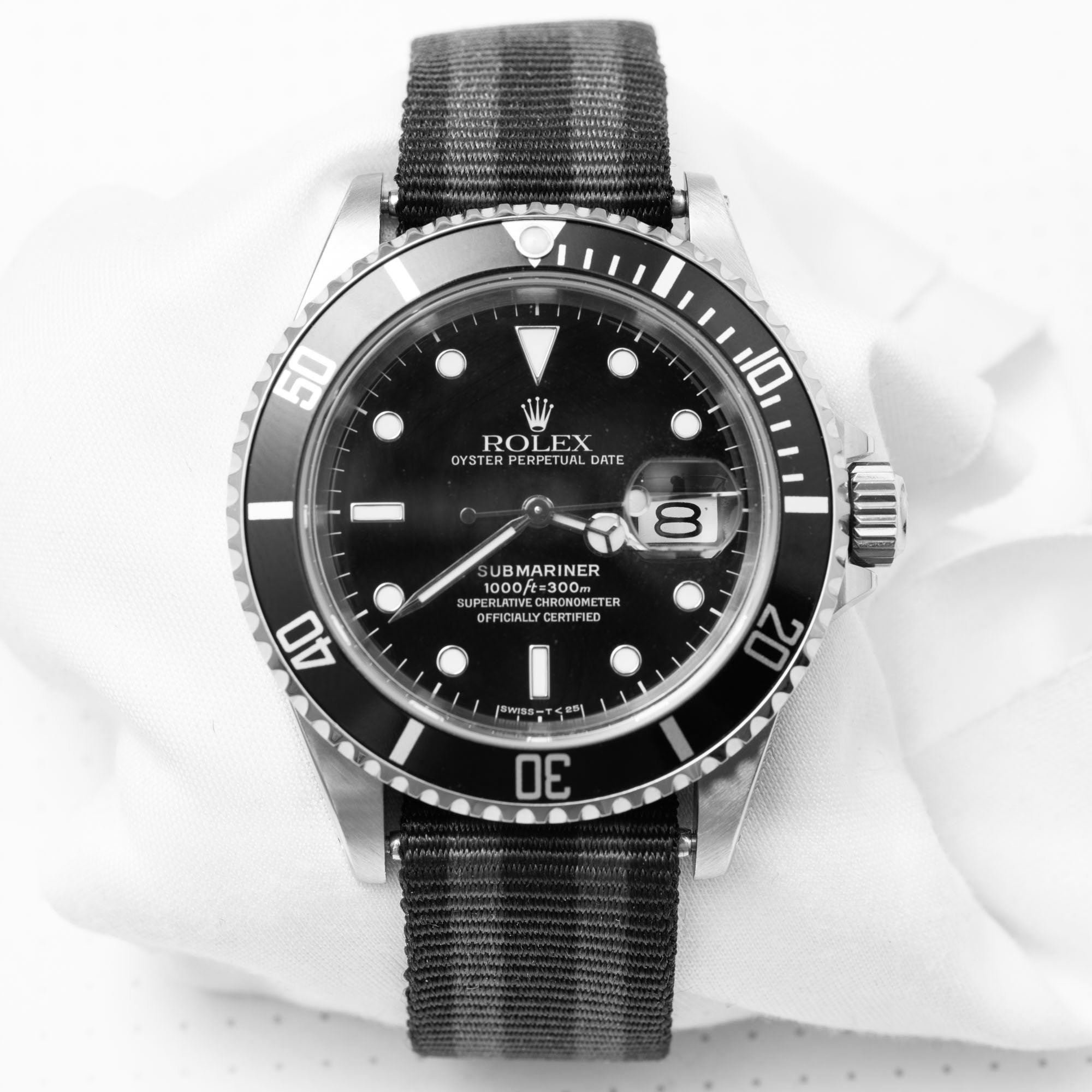 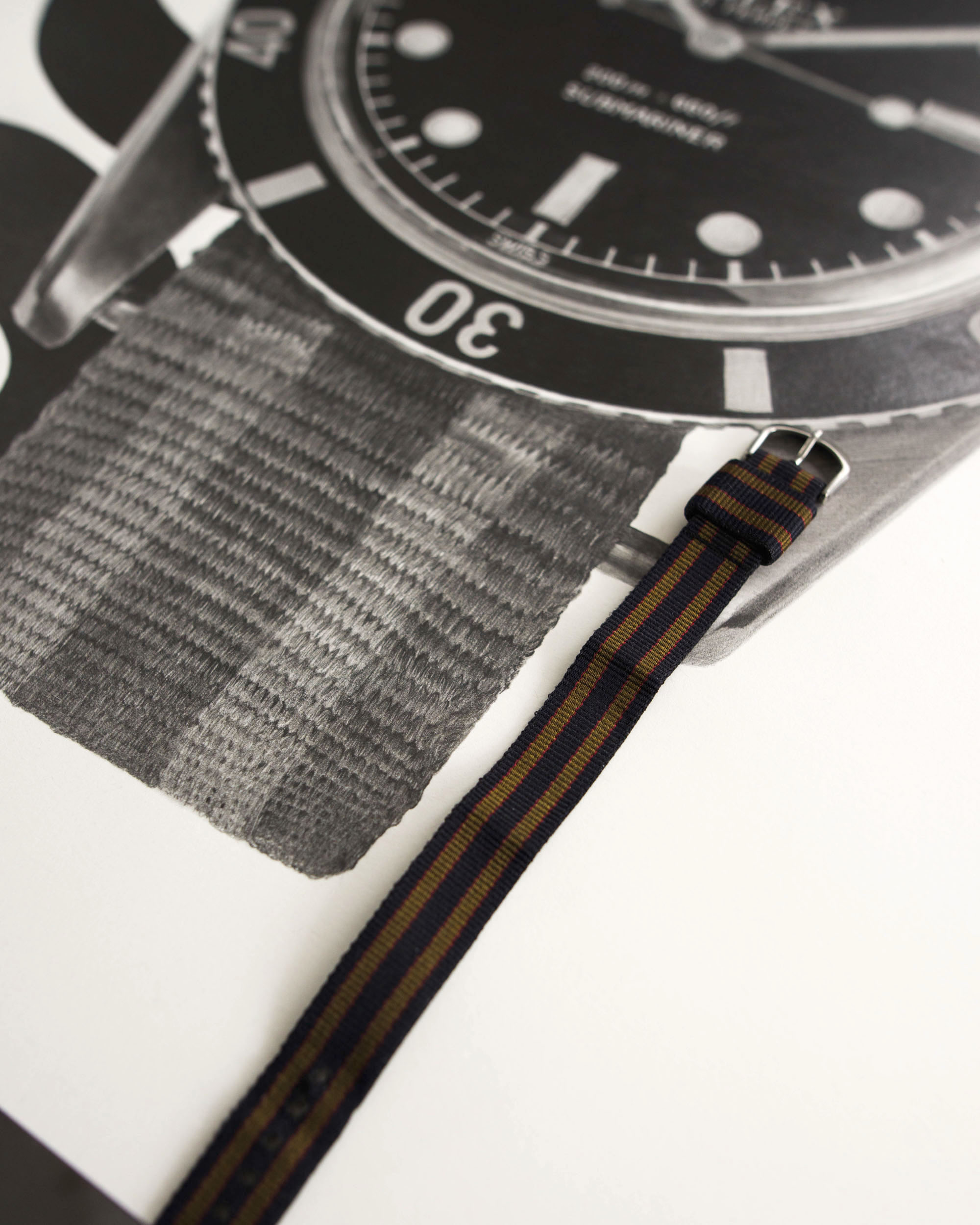 Having gone through as many 4k/Blu-ray quality moments as possible to get the closest idea of the strap, Tamás ended up sourcing the closest replica of this strap, which we placed on his very own Submariner 16610. The intention was not to take our best watch picture ever – as is indicated by the quality of the image – but rather to focus on the weave of the strap and get it to a shape exactly as we desired it to appear on the finished drawing. The 16610 modeled graciously, substituting for its much older, much rarer, and much more expensive Connery-worn 6538 counterpart. 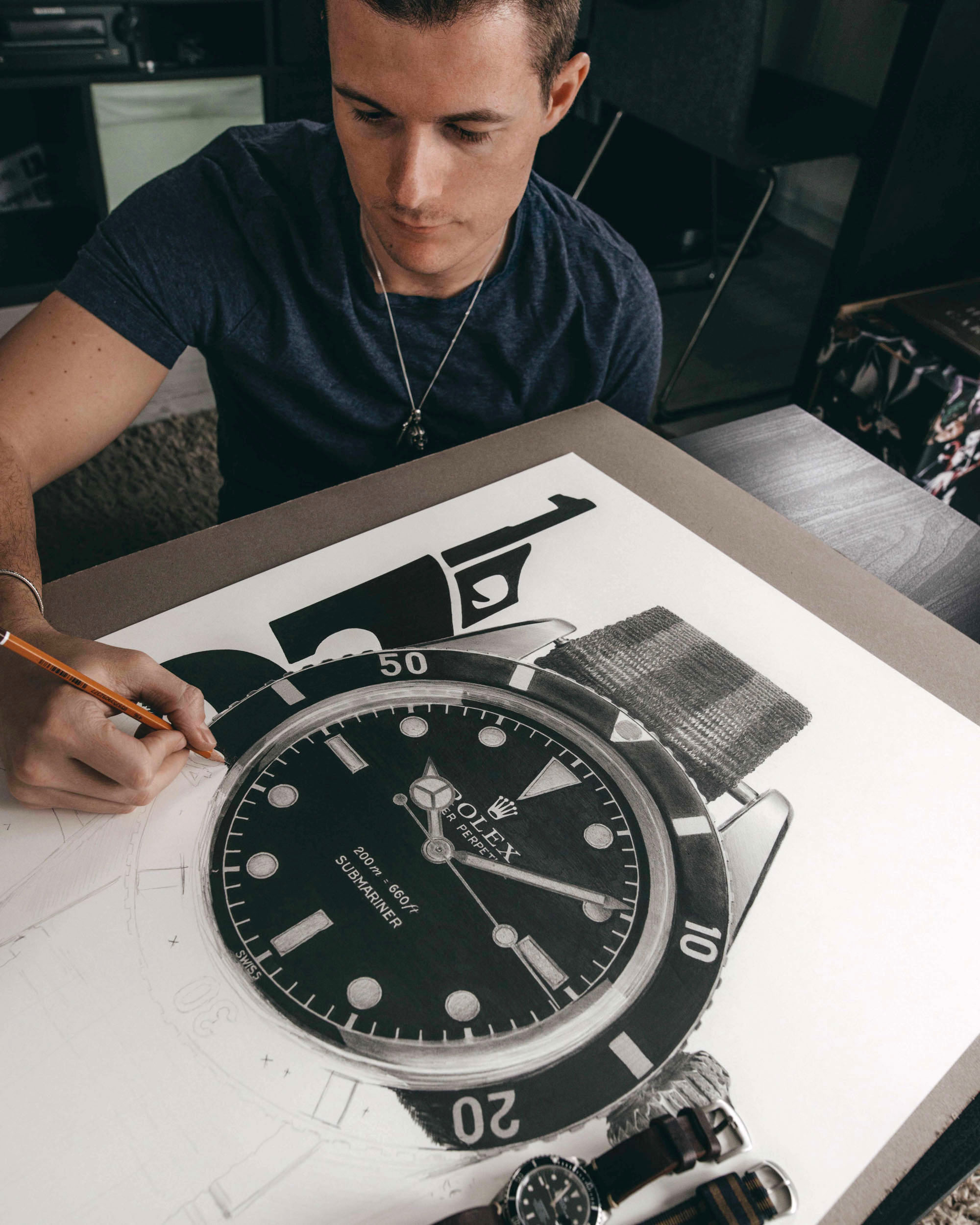 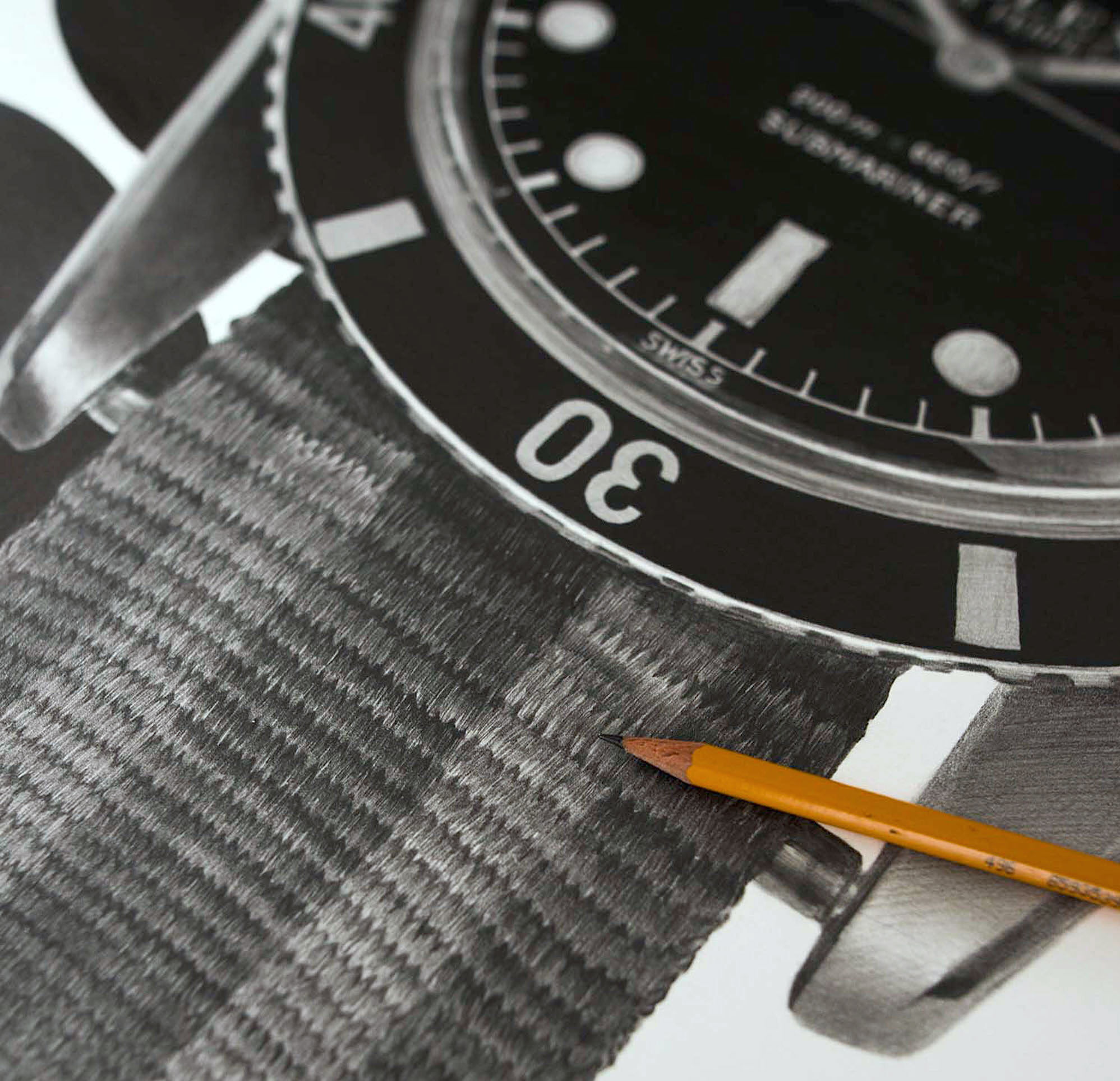 After a fair bit of photoshop magic, Tamás merged our photo of the strap with his graphic of the 6538 into one composite and added the period-correct 007 logo in the background to really drive the Bond theme home. Then the most daunting part of the work began: Hand-drawing the woven strap proved to be immensely challenging, admittedly stretching his honed skills and especially his patience to new levels. Both the innumerable lines of the individual threads and the delicate variations between the shading within each thread, as well as in between the various lines, have turned this artwork into a game of patience and perseverance. 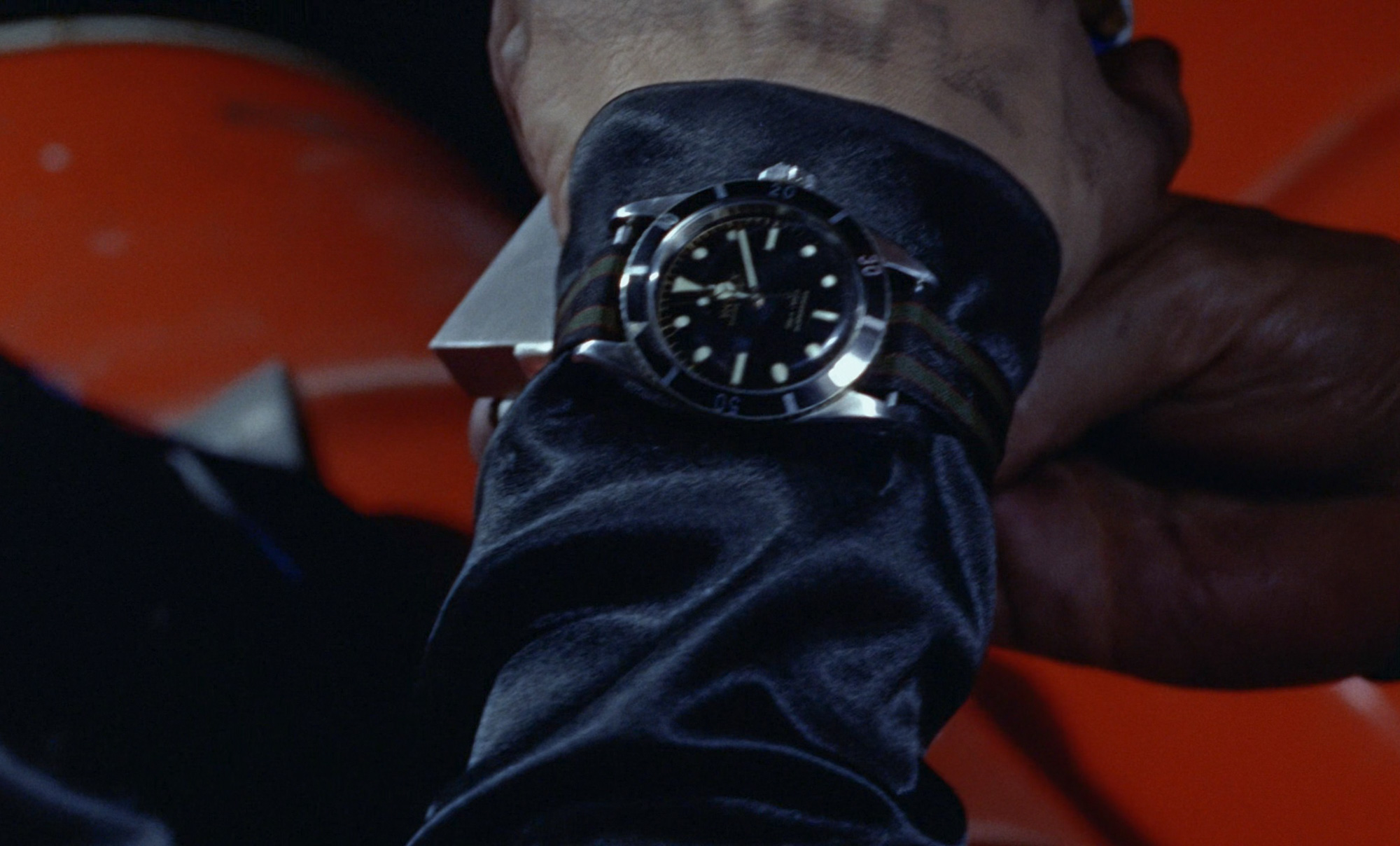 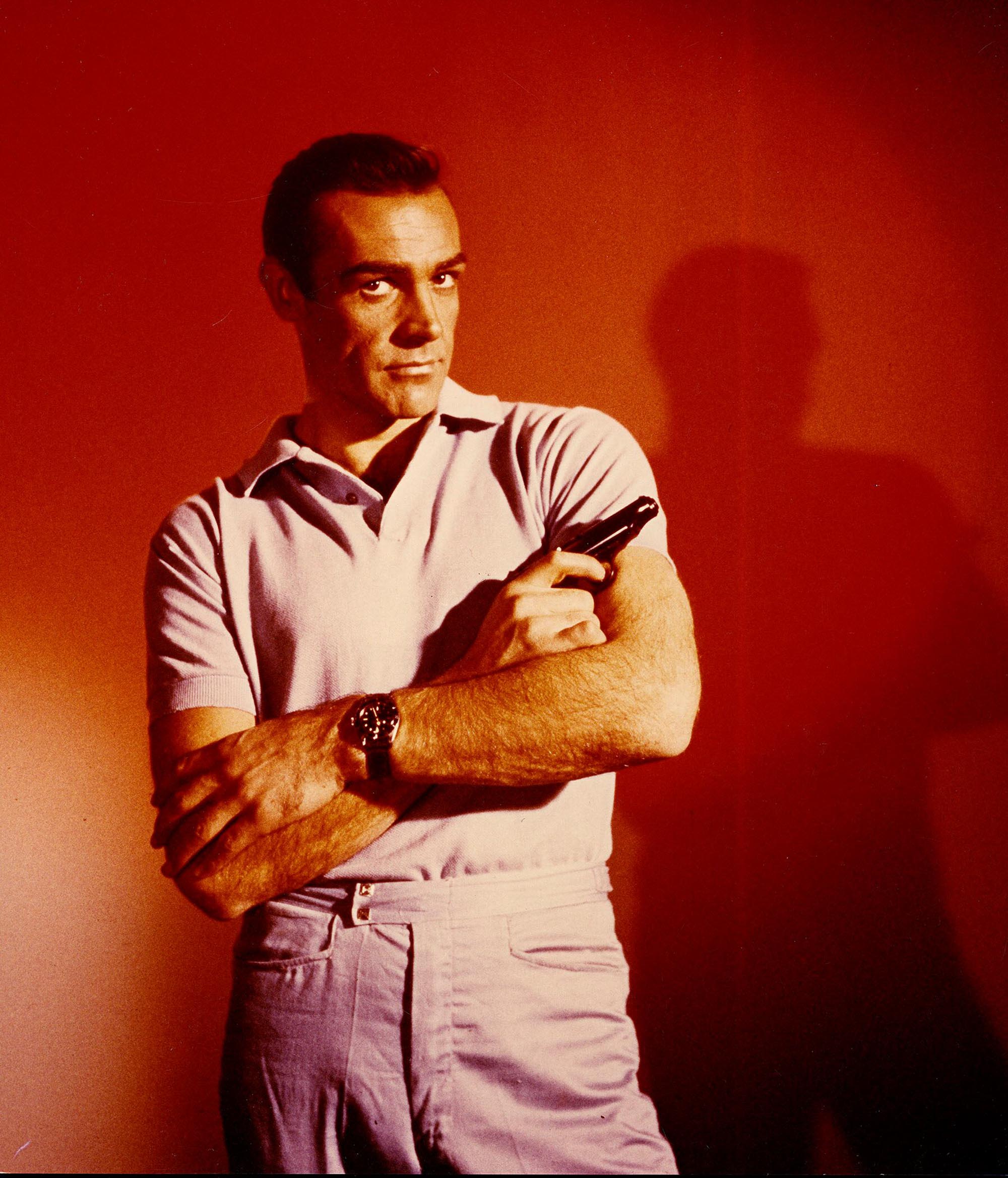 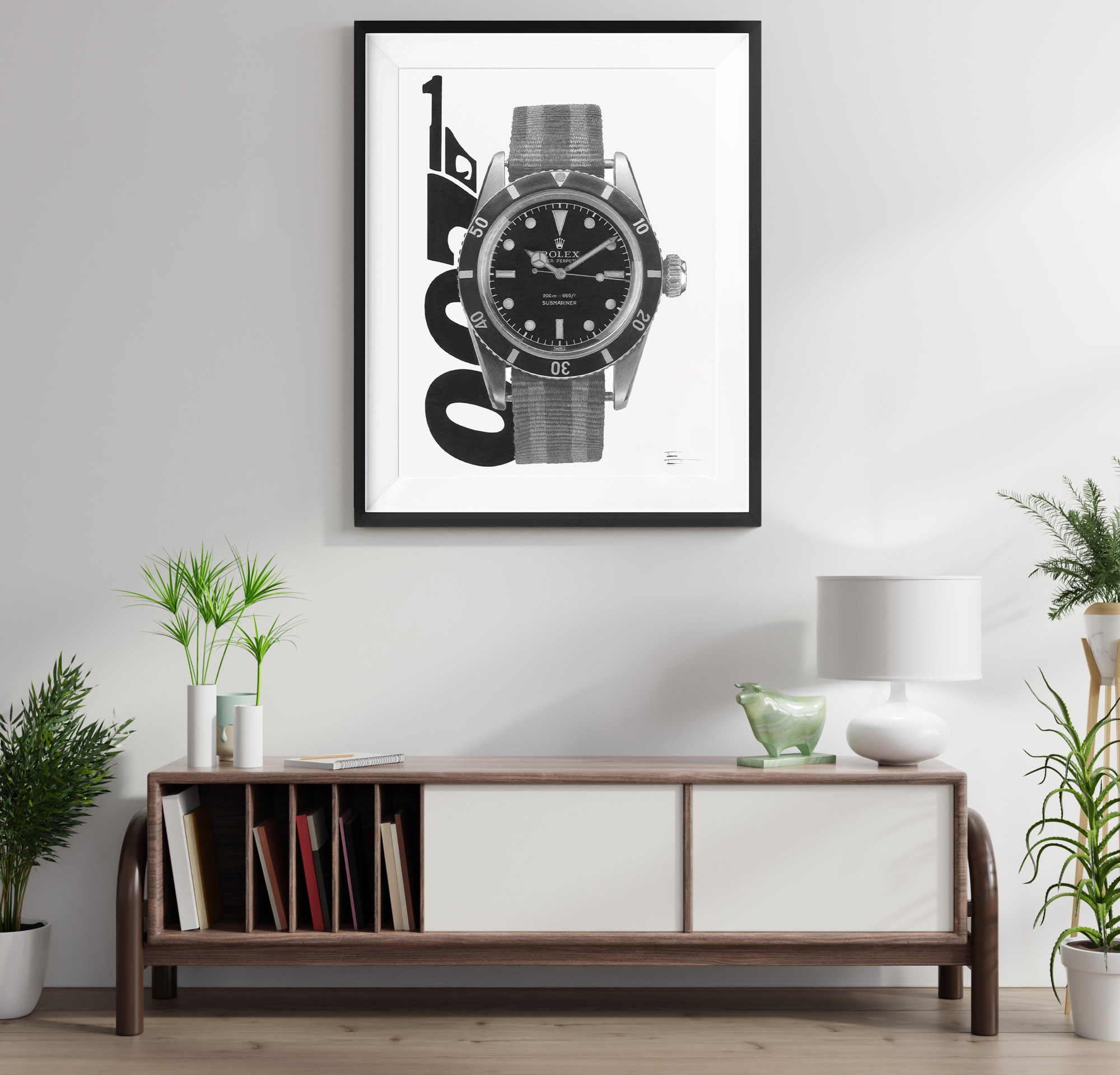 From three passionately researched icons of the 20th century to self-taught drawing skills, this is the journey of our “Art Tribute To Sean Connery & His Bond Rolex Submariner 6538,” the latest Horological Artwork that is now available on the aBlogtoWatch Store.

Browse a total of 15 Horological Artworks on the aBlogtoWatch Store or visit this link directly to get your “Art Tribute To Sean Connery & His Bond Rolex Submariner 6538” in the popular and easy-to-frame sizes of A3 and B2 (exact measurements are on the product page), priced at $149 and $199, respectively, with Free FedEx Priority Shipping to just about every country in the world.