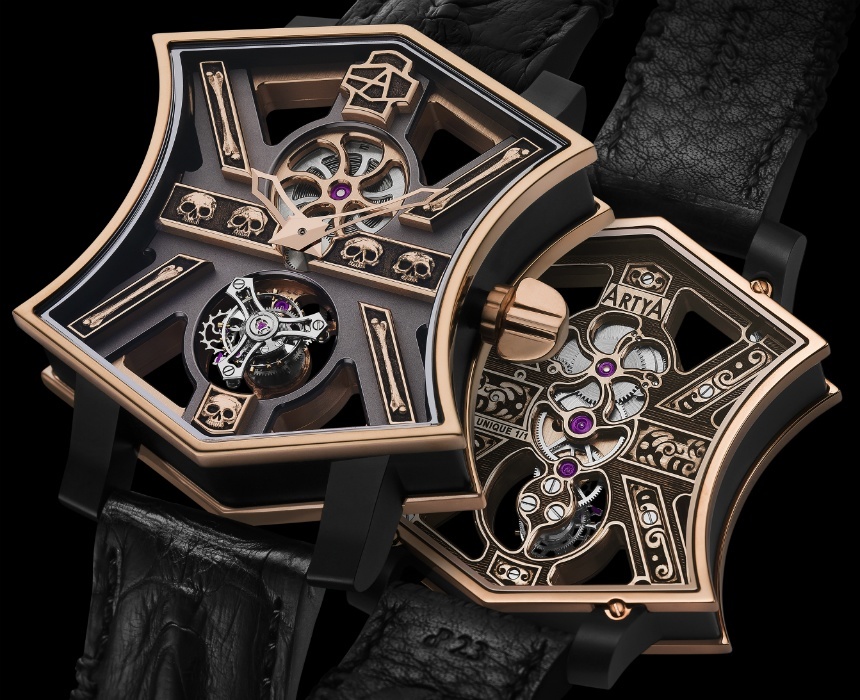 ArtyA is a brand established by Swiss watch designer Yvan Arpa. Prior to ArtyA, he had stints at Baume & Mercier, Hublot, and later, Romain Jerome. ArtyA was started in 2010 and soon gained a reputation for making brash and creative timepieces. And for 2016, the brand is releasing two unique pieces, the ArtyA Cumbere Tourbillon and the ArtyA Son of Sound Magic Black Tourbillon.

Both new watches use ArtyA’s distinctive guitar-shaped case which comes from the brand’s Son of Sound collection of music-inspired pieces. Both have the same case which measures 37mm wide, 49mm tall, and 15mm thick; and they are crafted using ArtyOr – an alloy made out of gold and recycled bullets – and black PVD. One thing prospective buyers should note is that the case is not water resistant. Now, let’s take a closer look at the two of them, beginning with the ArtyA Cumbere Tourbillon. 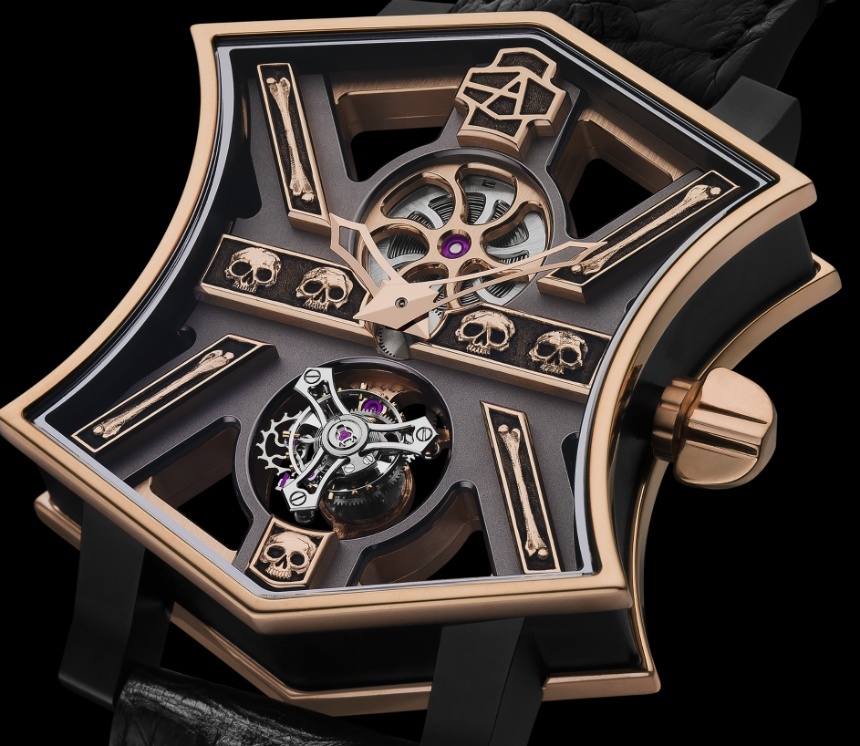 The ArtyA Cumbere Tourbillon is an exercise in open-working and one of the first things many readers will notice are the large sapphire crystals that cover the front and back of the case. It means that owners will be able to completely enjoy the mechanics within. Speaking of which, the ArtyA Cumbere Tourbillon features a unique hand-wound flying tourbillon movement that was designed by Yvan Arpa and executed by Manufacture d’Horlogerie Contemporaine (MHC). At 6 o’clock is a flying tourbillon that also displays the seconds, and at 12 o’clock is a single large barrel that provides a generous 100 hours of power reserve. Special attention was paid to both the position and size of the barrel so as to create a symmetry with the flying tourbillon at 6 o’clock. The movement also contains 19 jewels, most of which are visible, and beats at 21,600 vph. 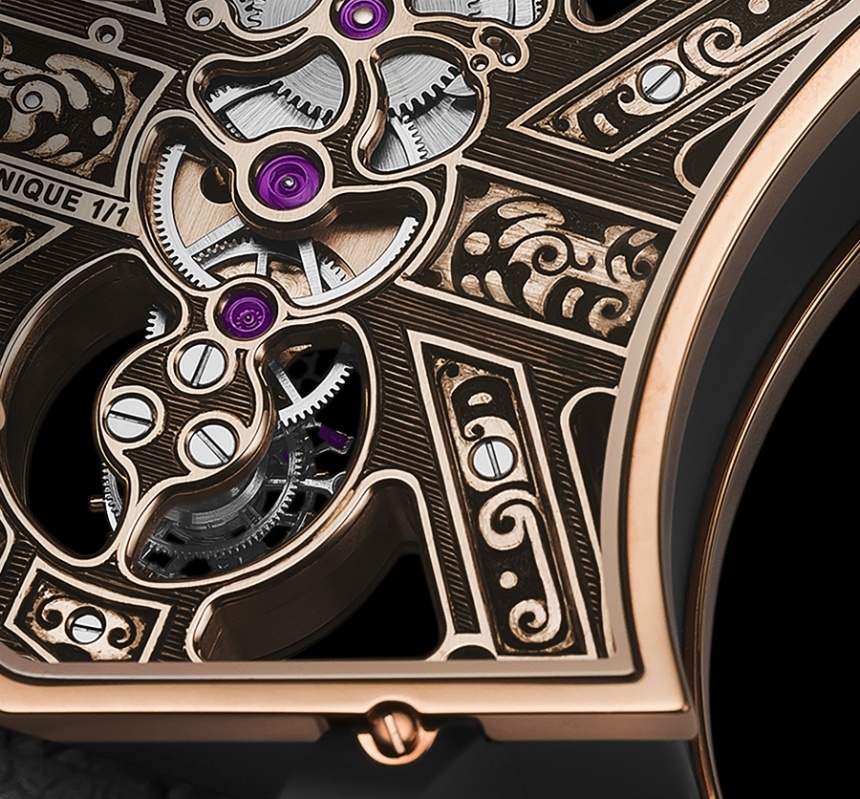 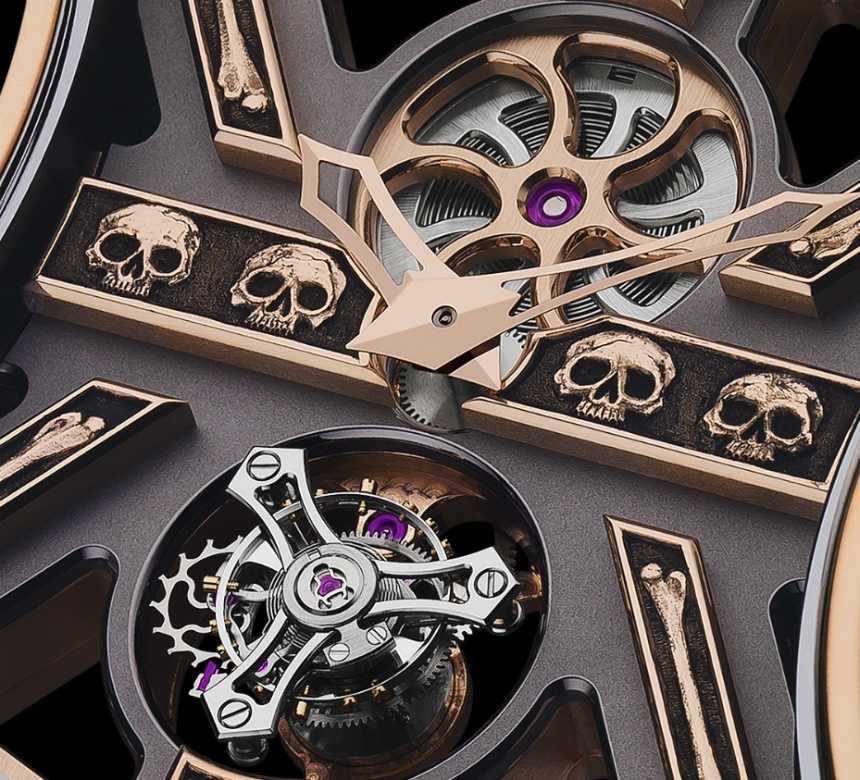 What’s most eye-catching is the fully redesigned bridge and the X-shaped structure that supports the entire movement. According to ArtyA, this design was inspired by the X-bracing used to support guitars. And if you look closely, you’ll see that the front of the bridge and X-structure is entirely hand-engraved with bones and skulls following what ArtyA calls the “Blackwork Engraving” style. Another cool thing about the ArtyA Cumbere Tourbillon is the specially shaped crown which resembles a guitar tuning peg. 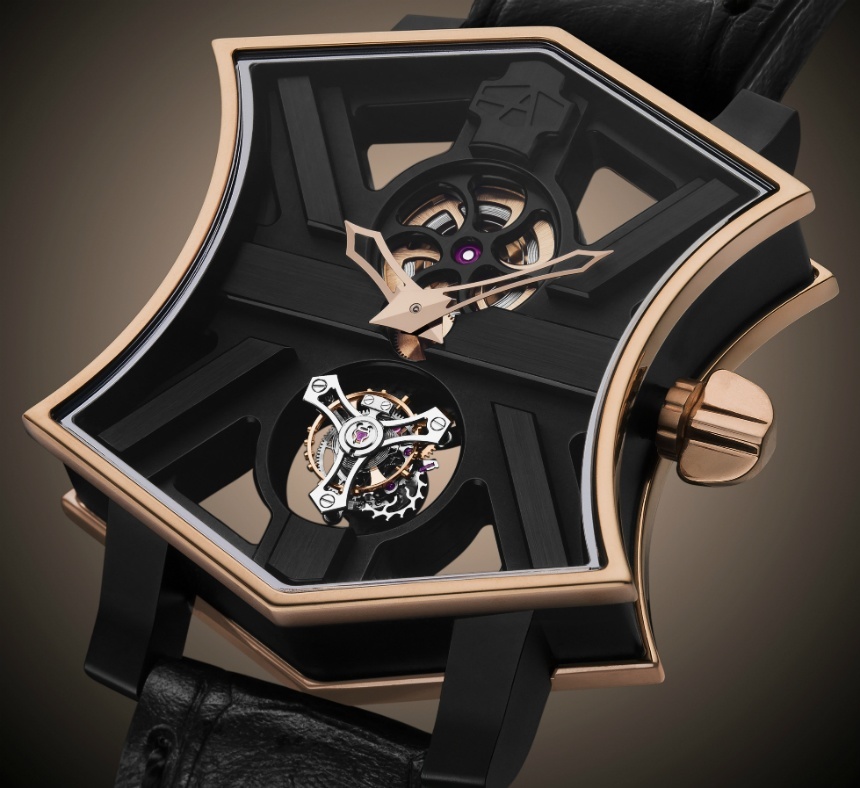 As for the ArtyA Son of Sound Magic Black tourbillon, it has the same guitar-shaped case which is flanked by two large pieces of sapphire crystal front and back, giving owners and unobstructed view into the movement within, which is the same as the one found in the ArtyA Cumbere Tourbillon. 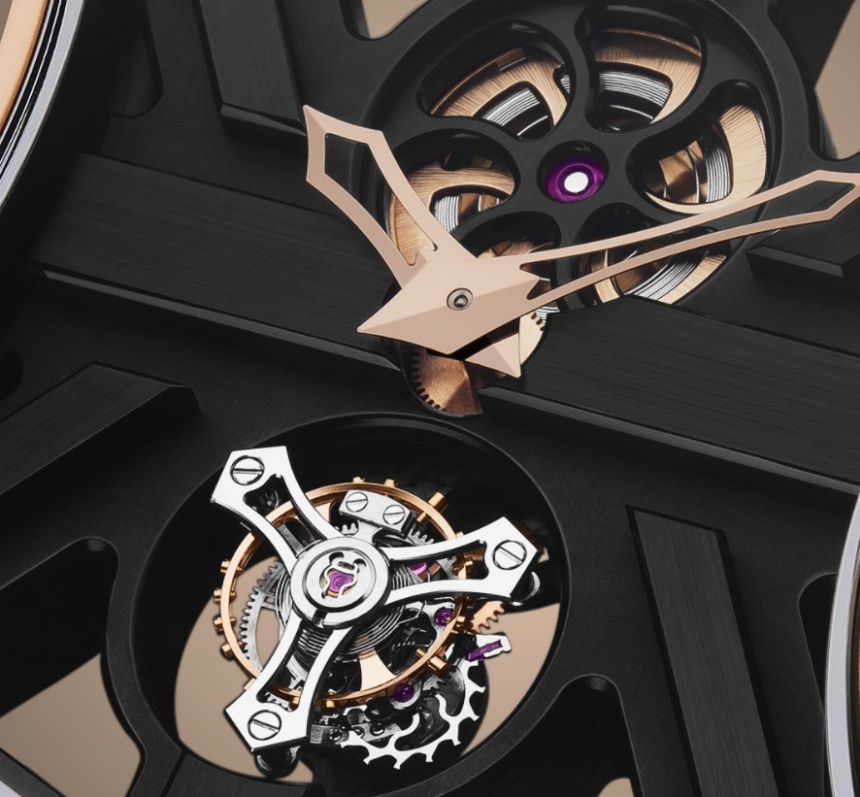 Both watches are unique one-off pieces and will be offered with a matching black crocodile strap. The ArtyA Cumbere Tourbillon is priced at CHF 185,000, while the ArtyA Son of Sound Magic Black Tourbillon is CHF 170,000. artya.com