At The Intersection Of Watch Lover And Asshole

Nolan’s post apparently isn’t a reflection of what Gawker media feels about watches. About two weeks later the site posted an article titled “A Dozen Watches That Cost More Than Your House.” That sounds like just the sort of article that would attract none other than the asshole Nolan was irritated with. And he was irritated. The familiar venom in his voice was no doubt livened by some recent encounter in New York City, where many a watch-asshole lives. People say that many a Wall Street man has that sort of “money is a reflection of how good a person I am attitude.” These guys are certainly a major contingent of the men who buy watches for their perceived status value versus personal horological interest. So if you buy something that is expensive, just to show it off as something that is expensive, the result is that people who can’t afford expensive stuff are going to think you are an asshole. That’s what we call people who brag. Other people call them “bros” then try to one up them with something more expensive. Which probably accounts for something like 12% of profits for some watch brands.

Gawker wants to make damn sure that if you are buying expensive watches it is for the right reason. They don’t go so far as to suggest that reason unfortunately. Still, they are trying to dispel all applicable myths like the good citizens that they are. A day before the post on timepieces that cost more than your house (well not all of our houses), Gawker studiously outlines “Why a $10 Casio Keeps Better Time Than A $10,000 Rolex.” Yea, I know, sort of a “duh” statement to most of us, but the intention was positive. Though if they think people are buying high-end watches for accuracy they are sort of missing the point – and how. Then again, why it is that we buy expensive inaccurate watches, or mechanical instead of quartz watches is one of those reasons we can often taste, but infrequently can put into words. It’s like trying to explain a pretty sunset. You just can’t unless you are truly gifted, or perhaps British. Good watches are beautiful, and unless you’ve been able to experience a fine timepiece you simply can’t impart the rationale for being into them. 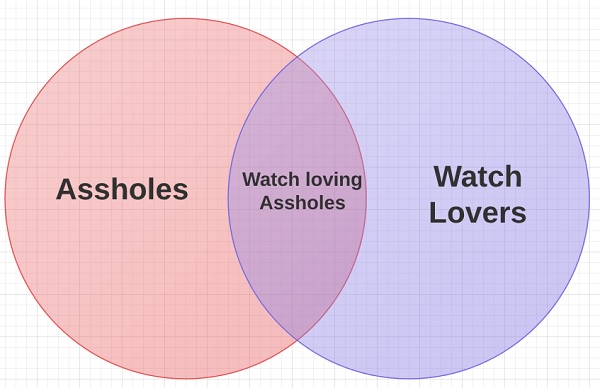 That doesn’t totally explain Gawker’s anti-horological agenda. Or are they just anti-asshole? To view the hole in their logic I drew a little Venn diagram. Nothing fancy, but it helped illuminate light on the topic. The circle on the left is “assholes” while the circle that partially overlaps it on the right is “watch lovers.” There is most certainly an intersection of assholes that are also watch lovers, but that certainly doesn’t account for all watch lovers, or all assholes. In fact, what remains to be explained are all the assholes that aren’t watch lovers. Perhaps that accounts for watch lovers who are no longer or not yet assholes, or perhaps just a lot of assholes who haven’t discovered watches yet. More study is required.

At least two of the Gawker articles take personal stabs at Rolex. Ouch! Naw… Rolex can take it. What intrigues me is that Nolan takes out his hate on the watches themselves. Aren’t assholes easy enough targets, now you have to beat up on innocent makers of over-priced wrist accessories? Have mercy for the little guy Gawker. Starving children in Africa would kill for a Rolex. Patek is doing God’s work. Isn’t that obvious to everyone? Nolan has been around the block enough to be familiar with enough high-end watch brand names. He even throws down a little Richard Mille action. Even though he suggests the asshole with the $16,000 Breitling is pretty obnoxious. Wait ’til he gets a load of some RM. The dude’s head is gonna pop. Emperor a-hole is about to be throned.

I’ve noticed something interesting about high-end items and the people that buy them. Once in a while someone comments on aBlogtoWatch, YouTube, or perhaps our Facebook page angry that the money people spend on a single luxury watch could go to save lives or feed children. That might seem sound, but it is a psychological and economic fallacy. First of all, people who have money tend to not like reminders that they have a lot of money. Sometimes like they to feel important or powerful, but nothing makes someone with money feel more uncomfortable than being around too many people with less money or being asked to give of their resources because social osmosis demands it. I go to a lot of charity parties for example. What you see there are people with money hanging around other people with money, quietly contributing to their tax write-off ledger – at a party. I’m not complaining or condemning. Simply pointing out that socially and economically speaking, the money that goes to buying expensive cars, houses, watches, women, etc… is destined for that purpose and wouldn’t likely be shipped off to less fortunate people. It just isn’t going to happen. So at worst guys like Nolan can admonish assholes who love watches for spending their cash on unnecessary material things like watches versus putting it into a retirement account or buying a CD for their kid’s college money.

When it comes down to it, Nolan and Gawker overall seem to be irritated with vanity. Oh yes, one of the seven deadly Christian sins. That epicenter of all that is asshole boils down to one person trying to alpha another. A fantastically funny bullet list ends Nolan’s piece on the asshole watch lover. He is careful to leave out the dedicated and educated watch enthusiast. Mostly showing anger to the wannabe watch man. I’ll give him this: you can’t buy yourself into being a watch lover. You need to be educated. Careful experience with watches breeds good taste and knowledge. Otherwise you are an over-funded poser, and no one likes that. Not even assholes.