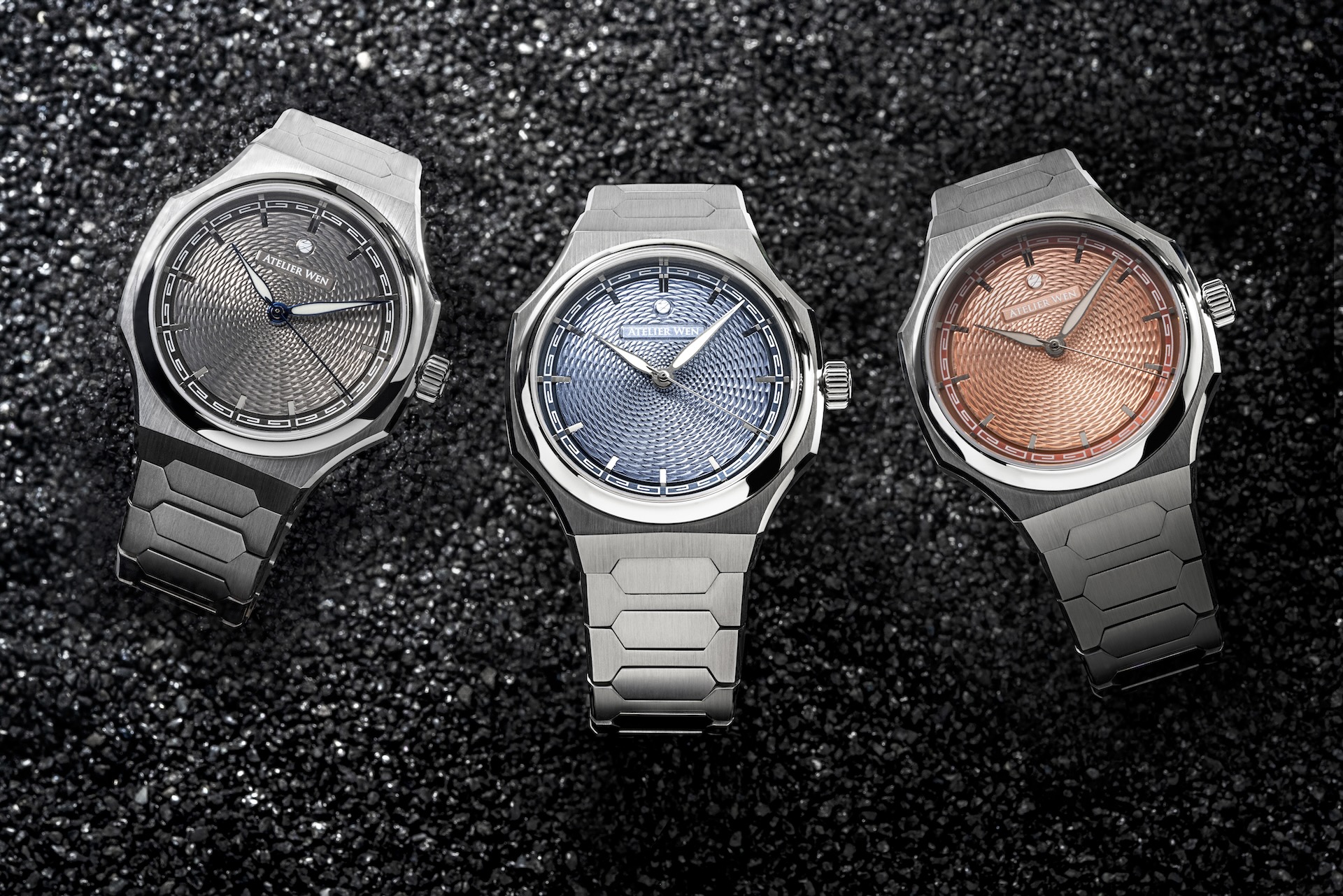 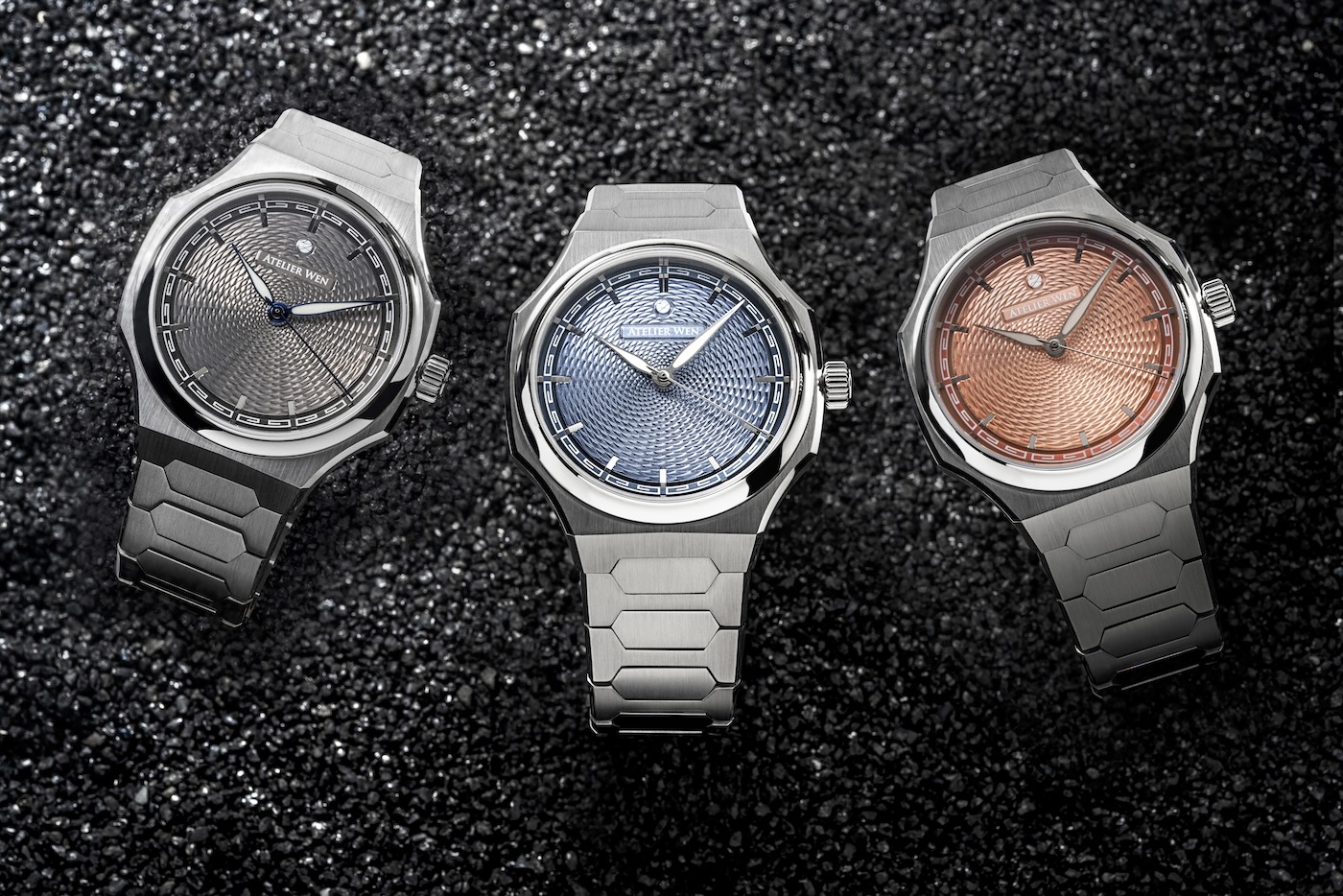 Stroll through the ancient stonework and cultivated Chinese gardens that are home to China’s only master guilloché craftsman and, eventually, you’ll reach a cave at the far end of the grounds. Step inside, and beneath the stone walls and ceiling, you’ll find Master Cheng turning a guilloché dial by hand, the rose engine lathe spinning, head stock rhythmically pumping along, creating a series of extraordinarily precise and intricate geometric patterns. After eight hours of total concentration, he will complete a single, impeccable dial. In introducing its newest series, Perception, Atelier Wen celebrates Master Cheng with a series of integrated bracelet sports watches that feature his stunning guilloché dials in three colorways. 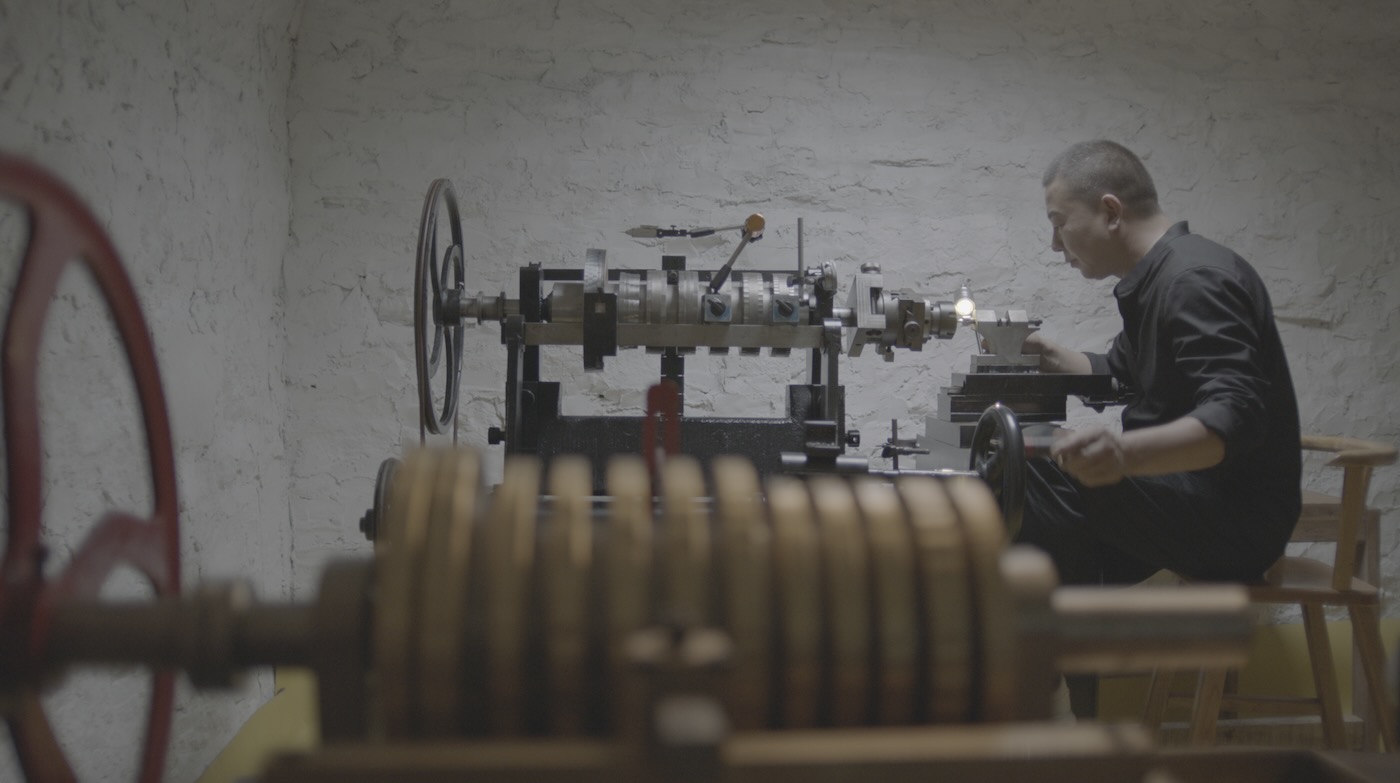 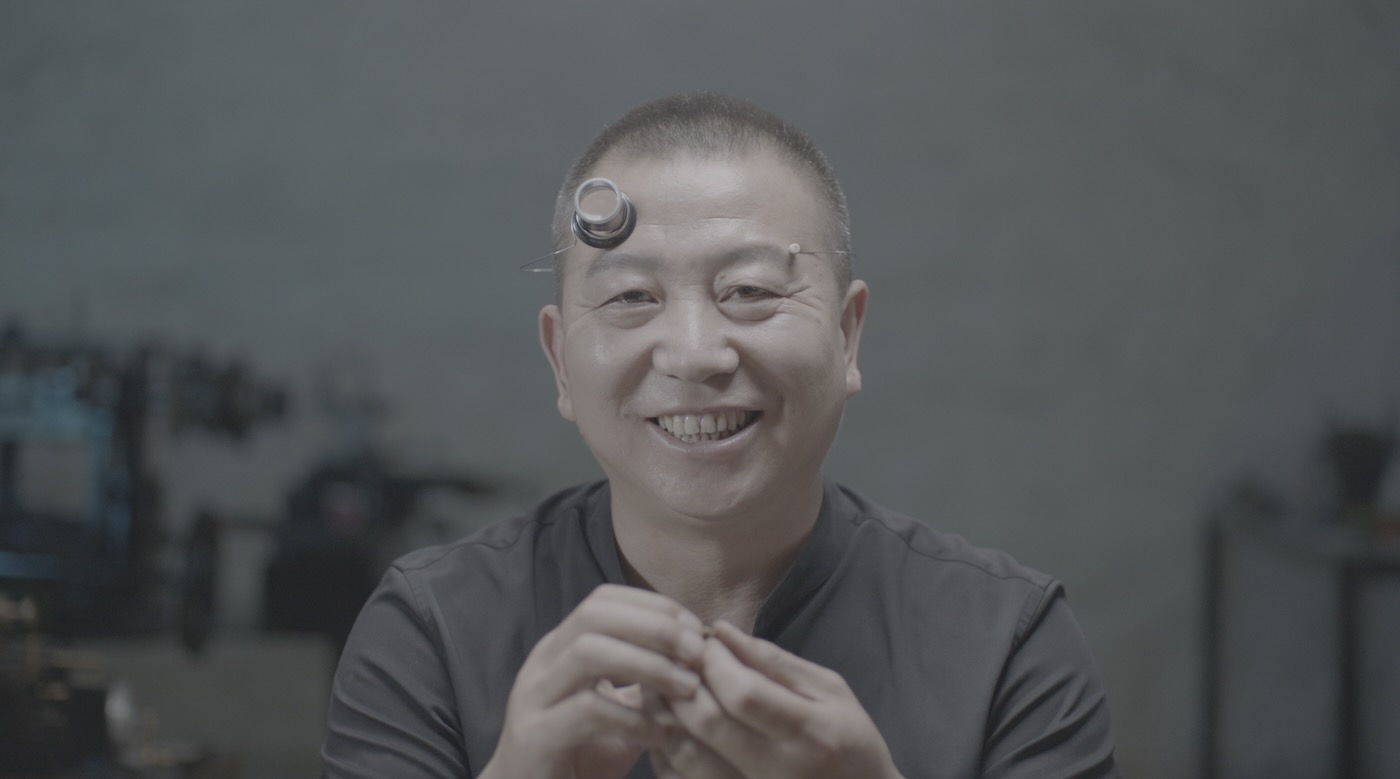 Since the process was invented in the 1500s, the technique of guilloché has remained almost unchanged, first practiced on softer materials like ivory and wood and a couple of centuries later in the 1700s, used to engrave precious metals like gold and silver. No surprise that it didn’t take long for watchmakers to adopt this technique for decorating pocket watch cases and eventually watch dials. Though the intricate textures can be imitated by stamping, laser engraving, or CNC machining, there’s simply no replicating the striking visual effect of a hand-crafted guilloché dial. Though Swiss watchmakers have long practiced this process, handing the tools, skills, and technique down from master to apprentice, Master Cheng was entirely self-taught, producing his patented rose engine and tooling entirely from scratch without outside help or technical drawings. Untold thousands of hours perfecting his craft later, he is one of the world’s few guilloché masters. While Master Cheng has produced dials for several major Swiss brands, his efforts have largely gone unacknowledged, his work sorely under-appreciated. Atelier Wen wanted to celebrate this master craftsman and proudly recognize the craftsmanship he dedicates to creating the dials on each and every Perception watch. 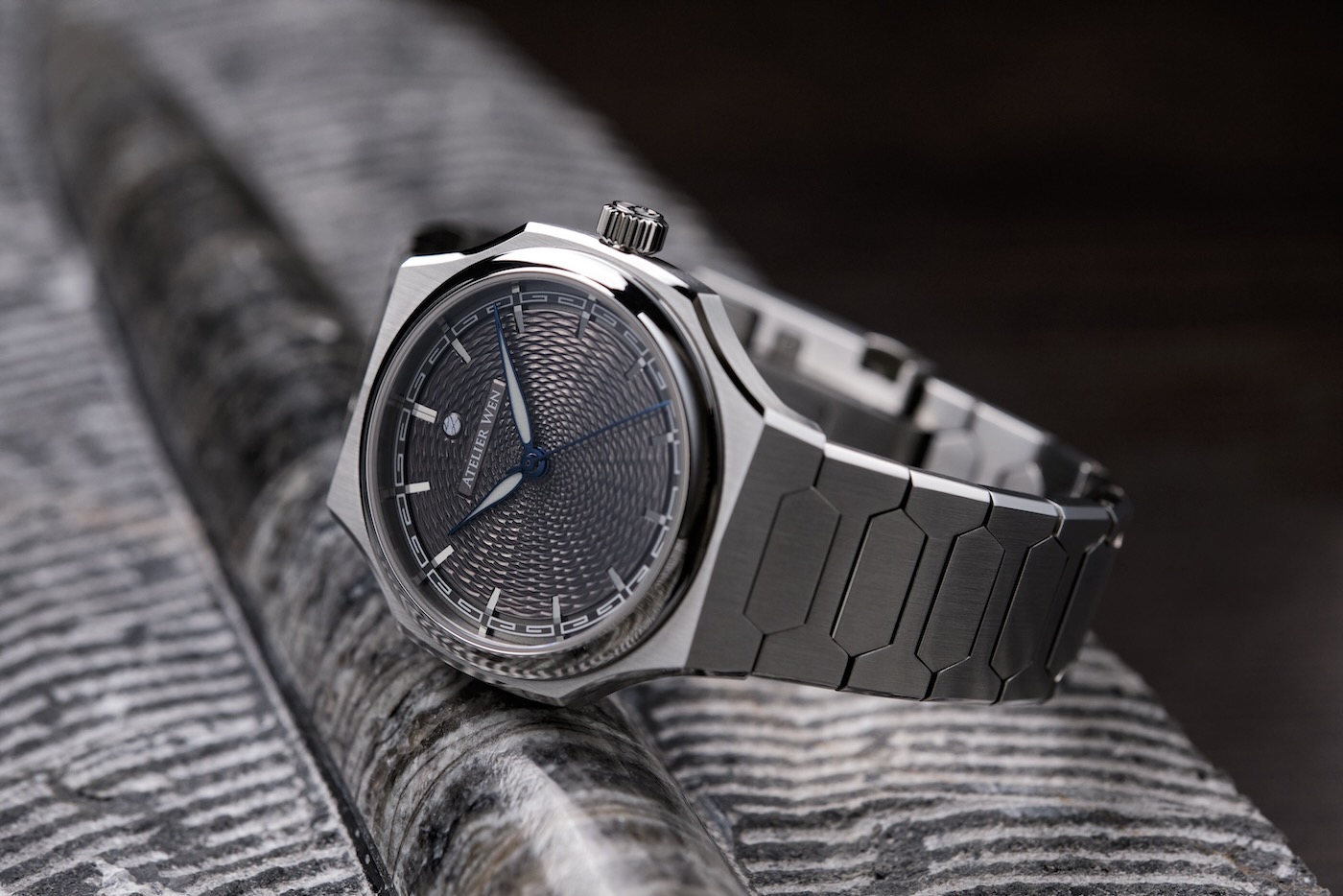 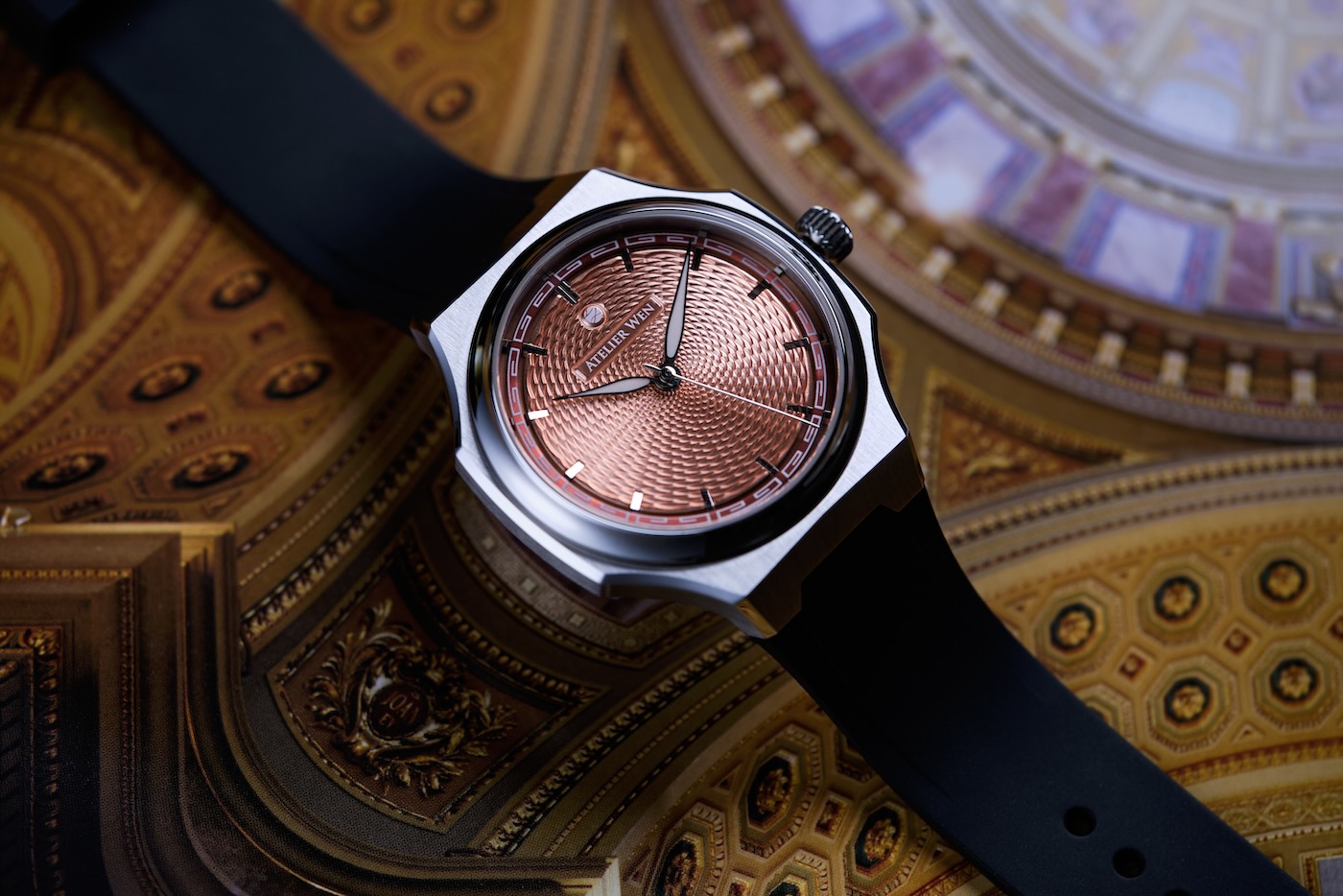 Atelier Wen was founded by two friends from France with a shared interest in Chinese culture that was galvanized by studying abroad in Beijing. Immersed in the history and culture of China, Atelier Wen’s goal was to create a brand that showcased Chinese style, aesthetics, and manufacturing prowess…. all with a bit of Parisian flair. A quick glance at the Perception, and it’s clear that you need to rethink any negative connotations associated with the term “Made in China.” These watches wear their Chinese provenance loud and proud, celebrating Chinese culture and artisanship. Atelier Wen couldn’t have chosen a more apt name for its newest model, as the Perception is certainly going to change the way many watch enthusiasts view Chinese watchmaking. 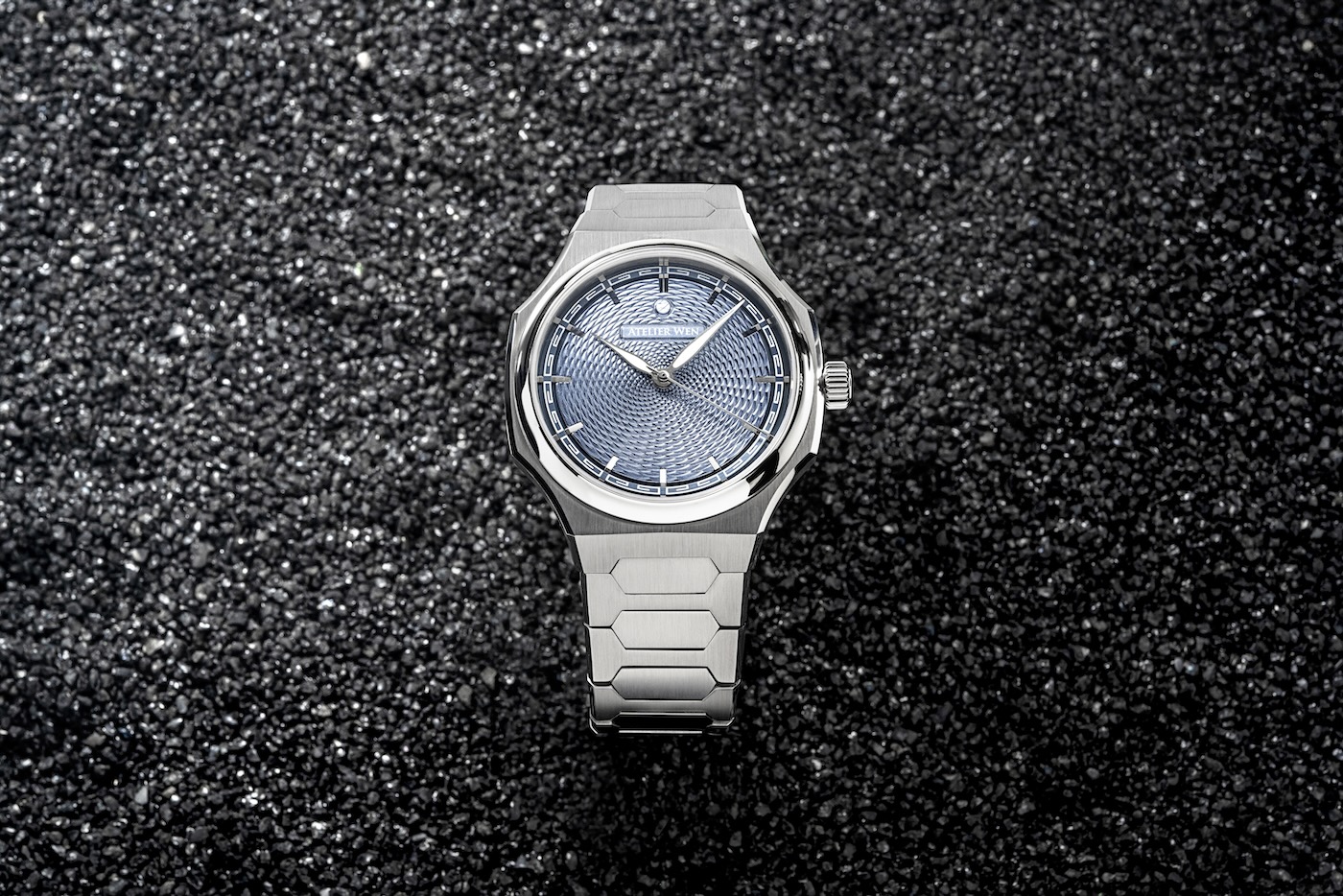 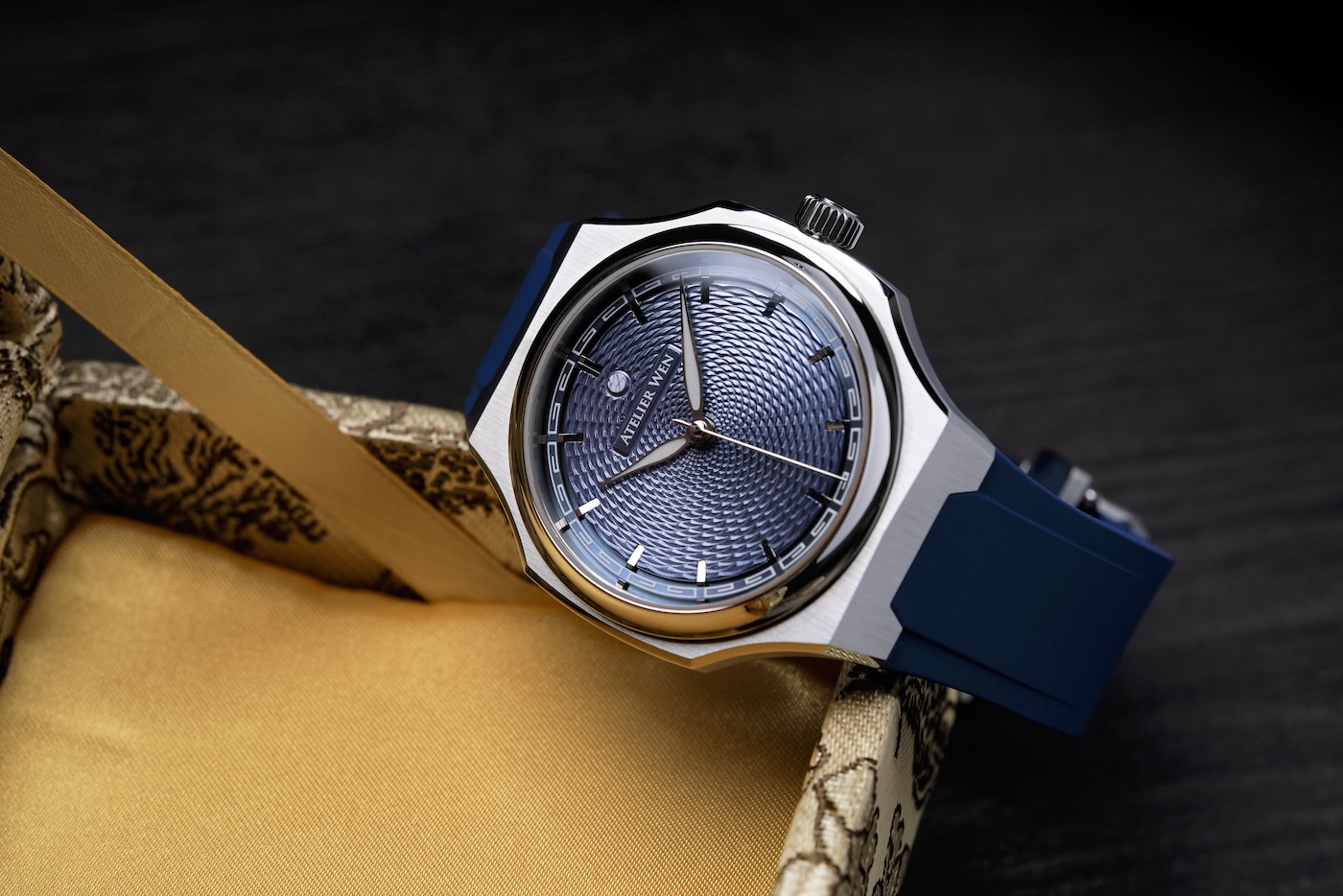 Integrated bracelet sports watches are, no doubt, having their moment, driven largely by Swiss brands resurrecting designs from their back catalogs. In creating the Perception, Atelier Wen wanted to utilize this classic form, while creating something distinct — and distinctly Chinese. As always, Atelier Wen had no interest in conforming to cliché (e.g., red and gold colors or the ubiquitous dragon), instead borrowing design elements from China’s rich and ancient architectural history. For instance, the dial structure follows the traditional Sunmao, or mortise and tenon, architectural principle with each level stacked on top of the next, nesting into one another. The juxtaposition between the depth of the guilloché dial and the thinness of the case (only 9.4mm) provides a sense of tension, further illustrating the architectural inspiration. 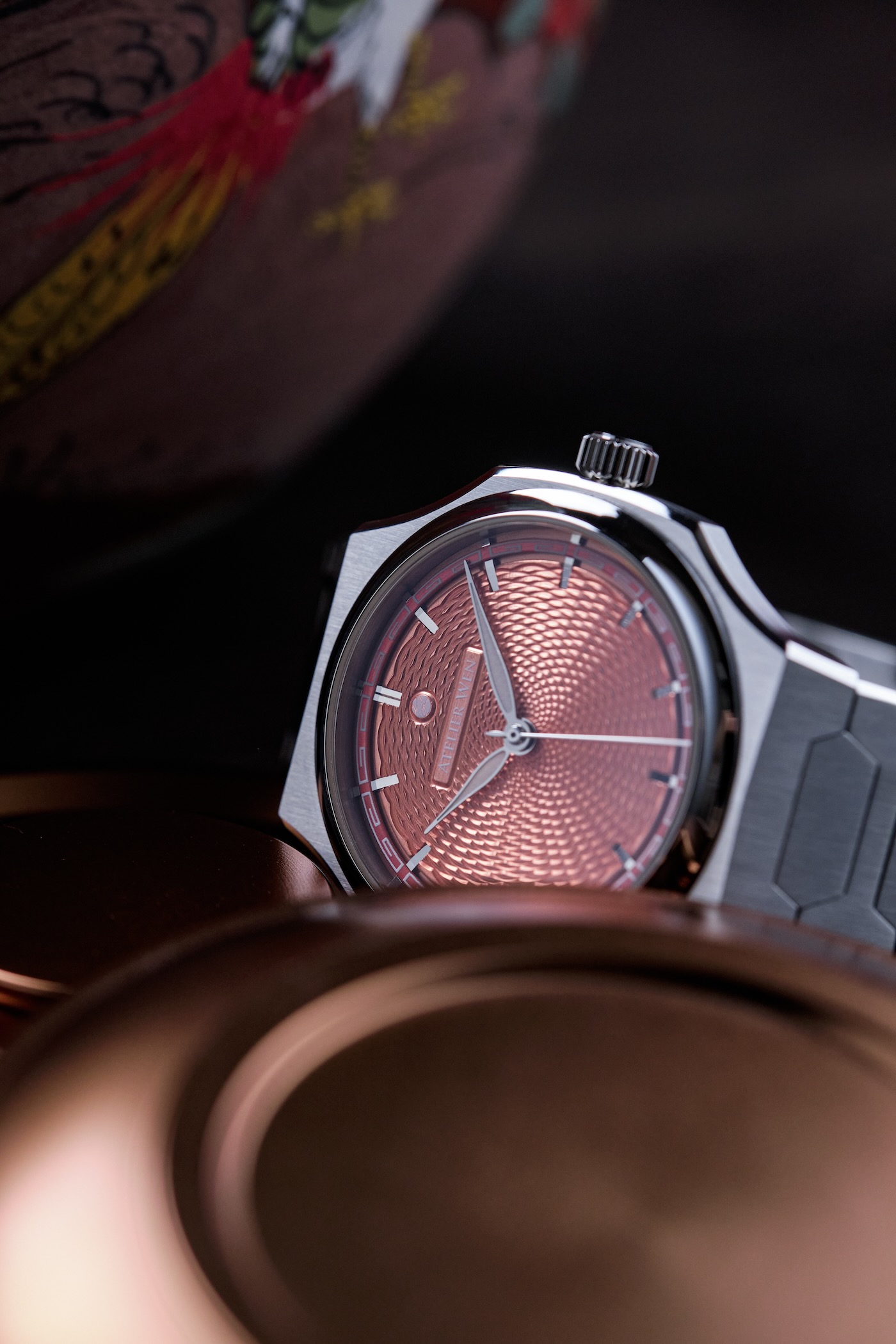 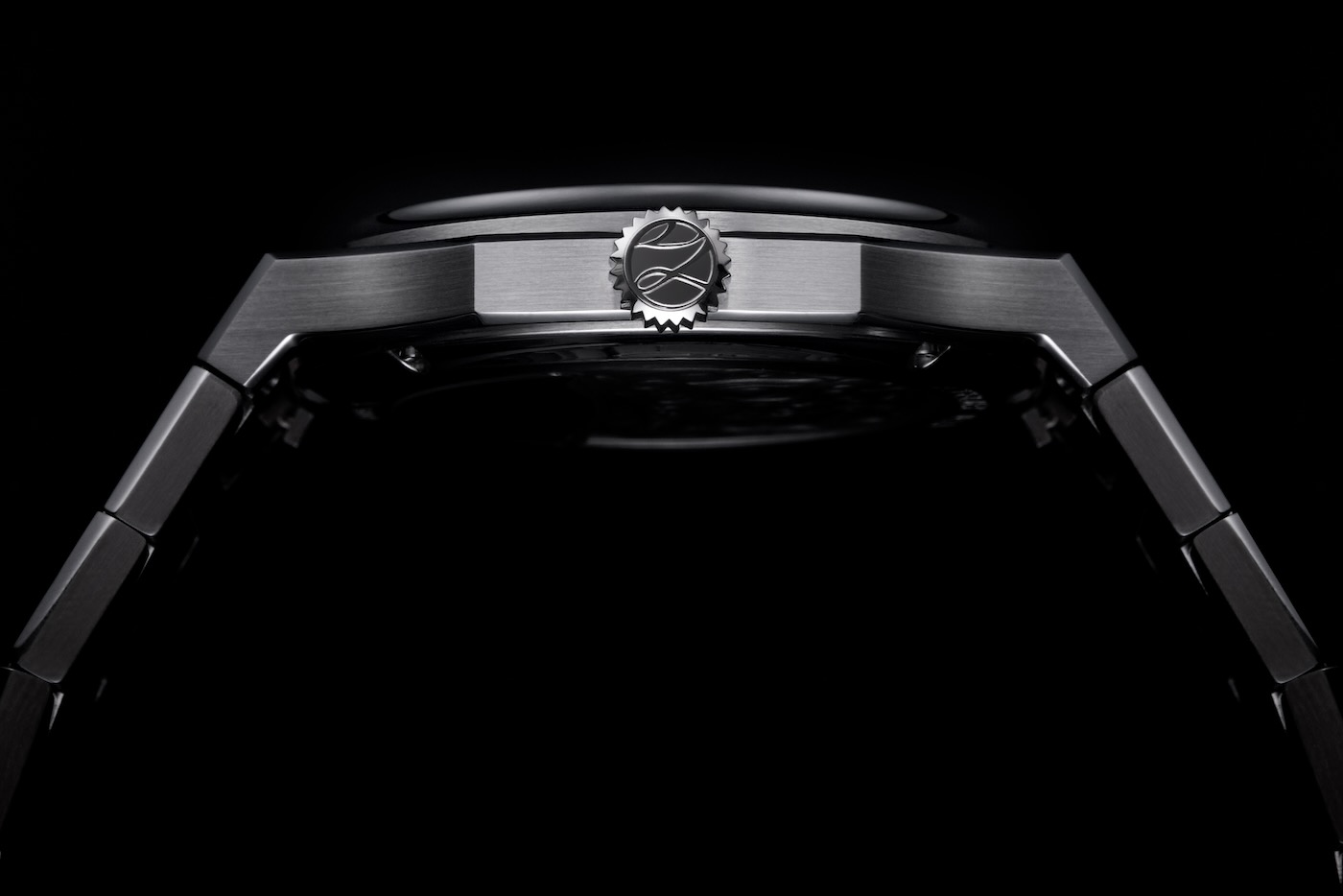 Flipping the watch over, the architectural theme continues with a Shishi engraved on the caseback. These guardian lions are deeply engrained in Chinese architecture and you can find them guarding the entrance to most temples and historic buildings. However, rather than continuing the engraving throughout the entire caseback, Atelier Wen provides a display window at the bottom portion of the caseback. When the rotor aligns with the display window, the Shishi appears to laugh, providing a stark contrast to the strong lines and sharp angles of the rest of the watch. The caseback is just another example of how every element of the Perception has been carefully considered to provide tension and contrast, changing the way the watch is experienced — in other words, changing your perception at every angle. 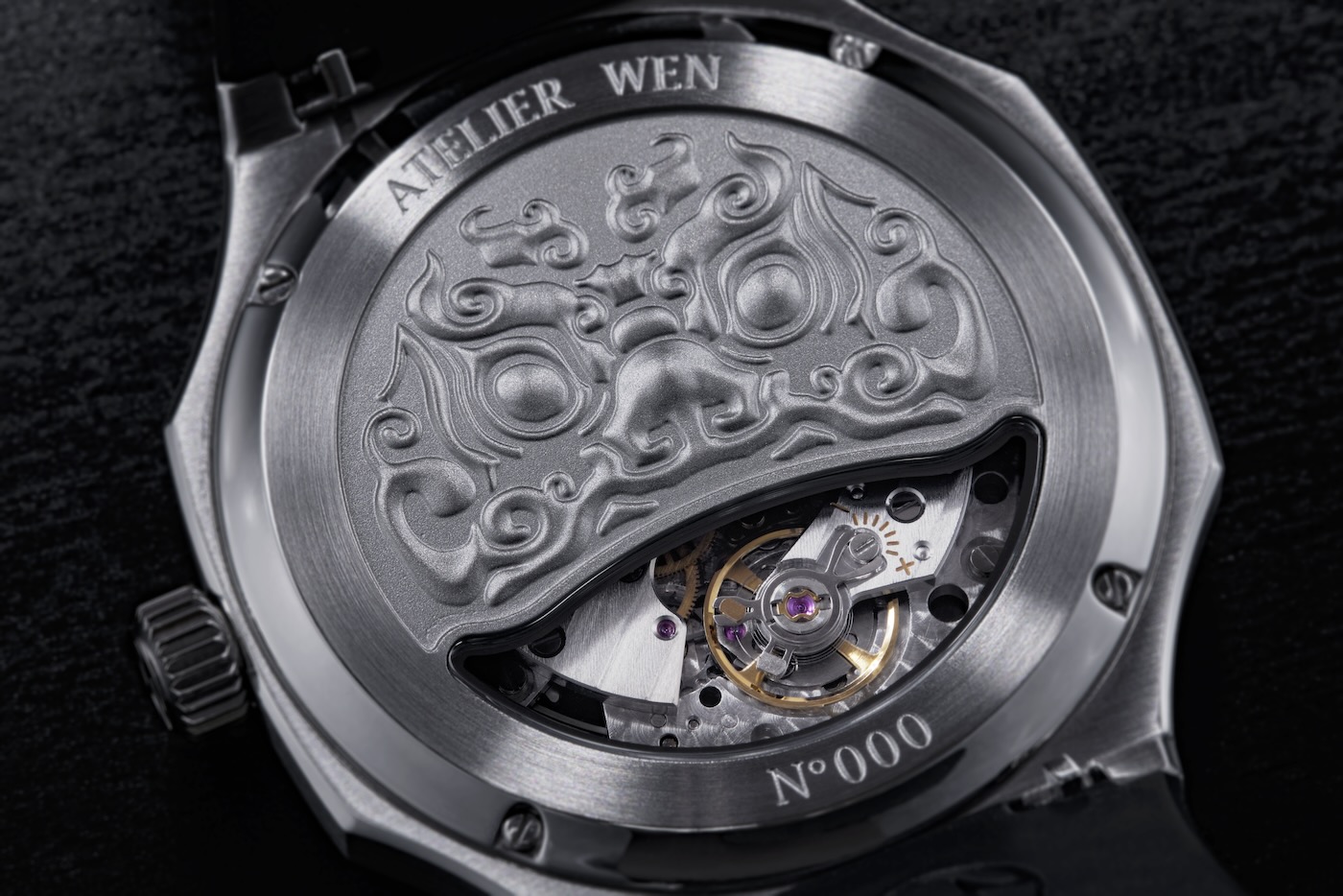 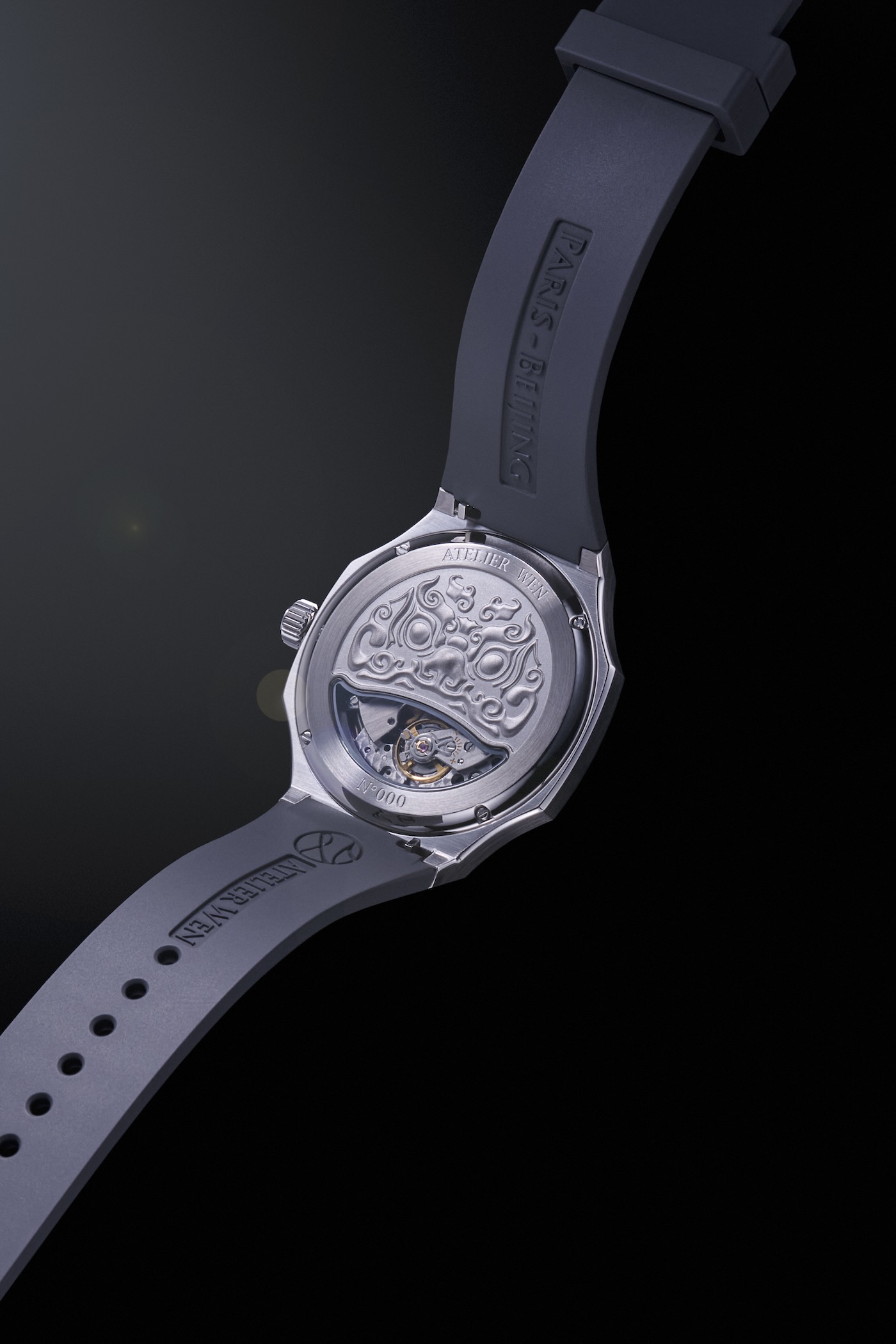 The handcrafted guilloché dial is a showstopper — and given that each dial takes 8 hours of painstaking work by a master craftsman, that should come as no surprise. The depth and dynamism of hand-turned guilloché simply can’t be replicated by mass manufacturing techniques. Available in grey, salmon, and ice blue, every single Perception dial is produced by Master Cheng using his patented rose engine. For these dials, Master Cheng has created a Sunmao dial structure with four levels of height, creating a dynamic, three-dimensional guilloché pattern. Bordering the dial along the minute track is a Chinese Huiwen pattern printed in Super-LumiNova X1 and intersected by applied rhodium-plated indices. Hand-bent leaf hands with amply applied Super-LumiNova X1 completes the package. The handsets are rhodium-plated to match the indices on the ice blue and salmon dials, but Atelier Wen opts for heat-blued hands for the grey dial for added contrast. 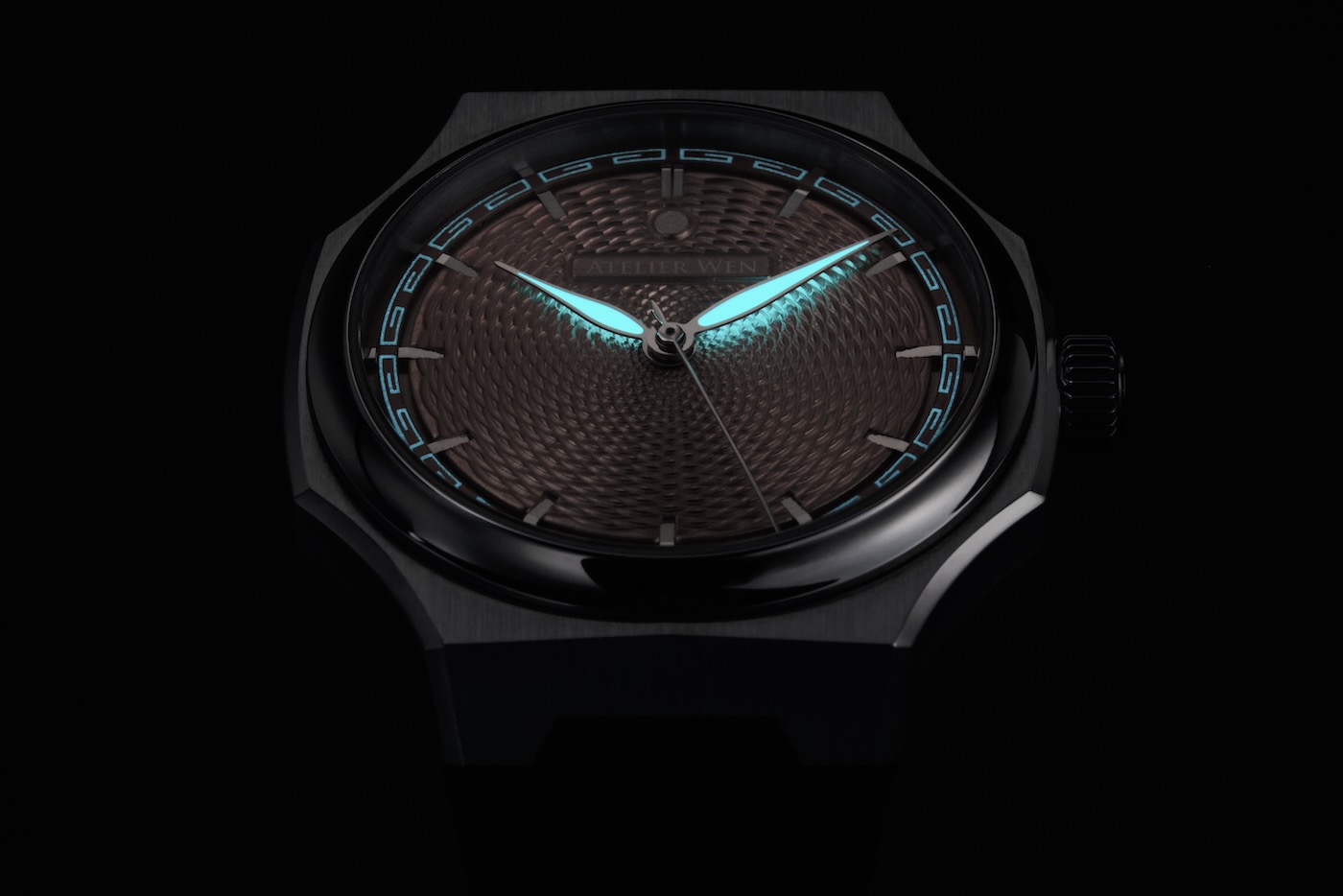 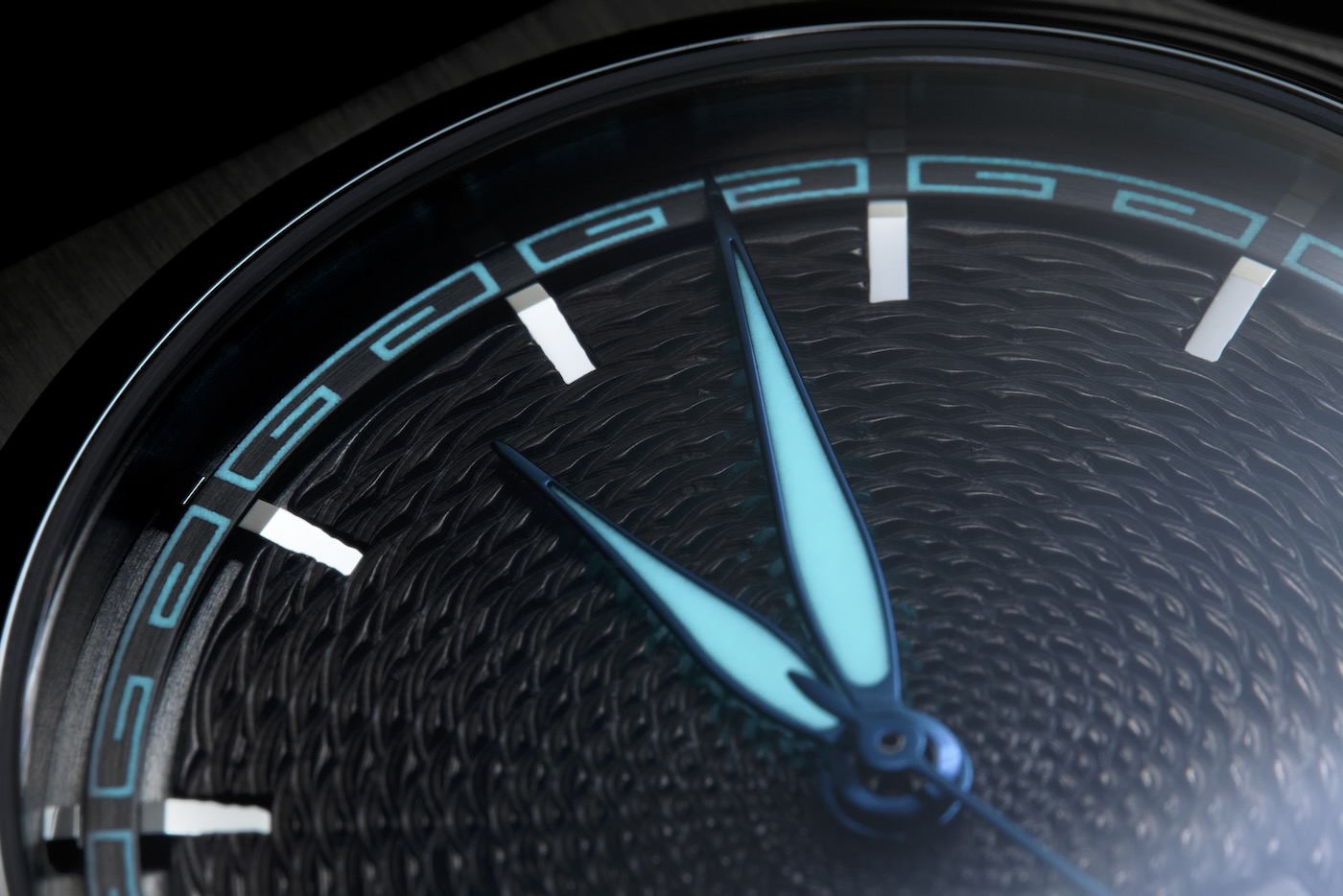 Though Atelier Wen certainly could have chosen a simple case design to showcase the dial, they chose instead to flex their design muscles, crafting a case that features unorthodox curves and sharp transitions that highlight the mix of brushed and polished surfaces and the brand’s attention to detail. Again using architecture as inspiration, the case shape mimics the curved silhouette of Chinese pagodas, while gentle curves on the lugs are reminiscent of their roof structures. Created using 904L stainless steel, known for its luster and corrosion resistance, the Perception measures in at 40mm in diameter, but a svelte 9.4mm-thick, even with a double-domed sapphire crystal. Ensuring that the Perception is suitable for all occasions, the watch features 100m of water resistance. 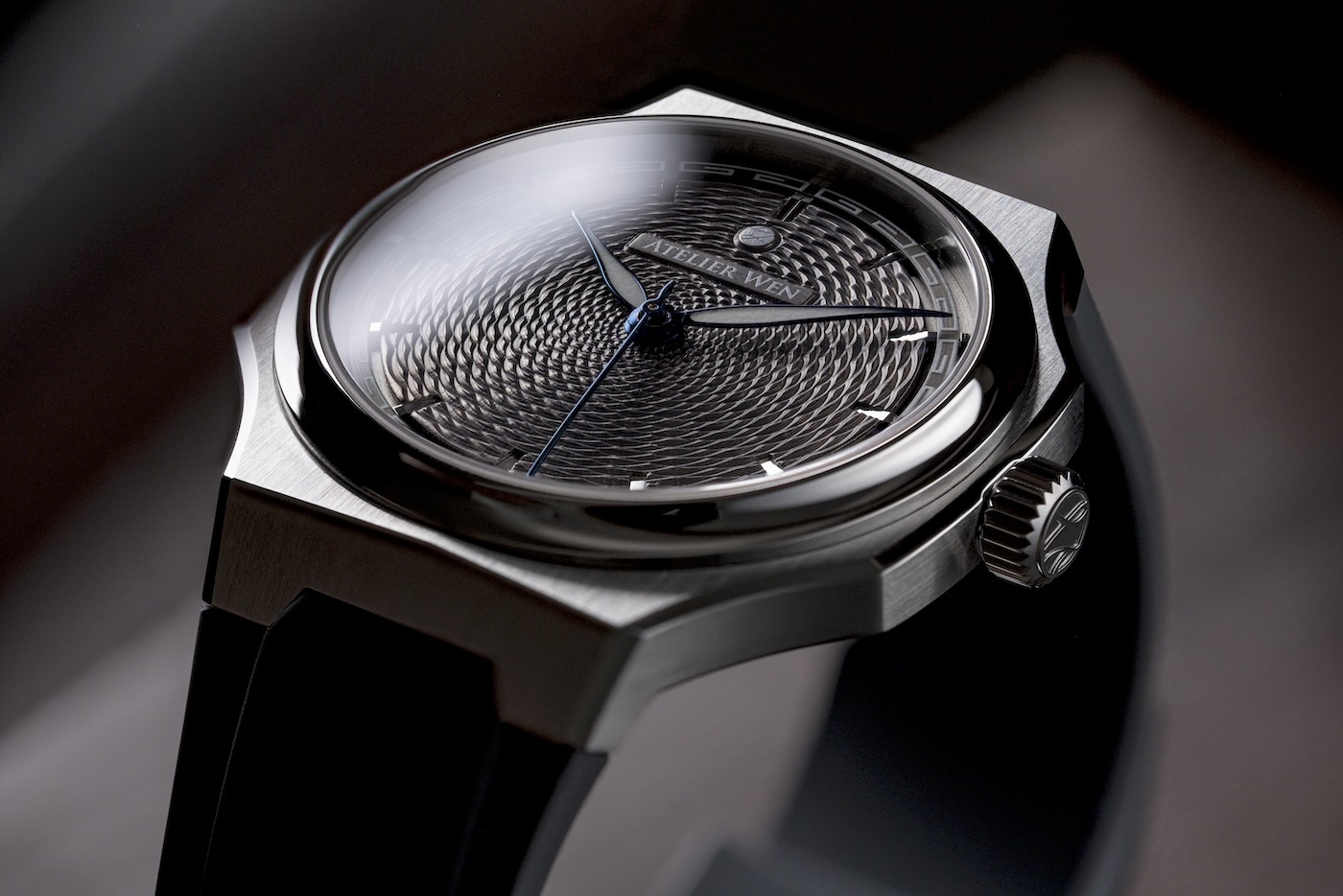 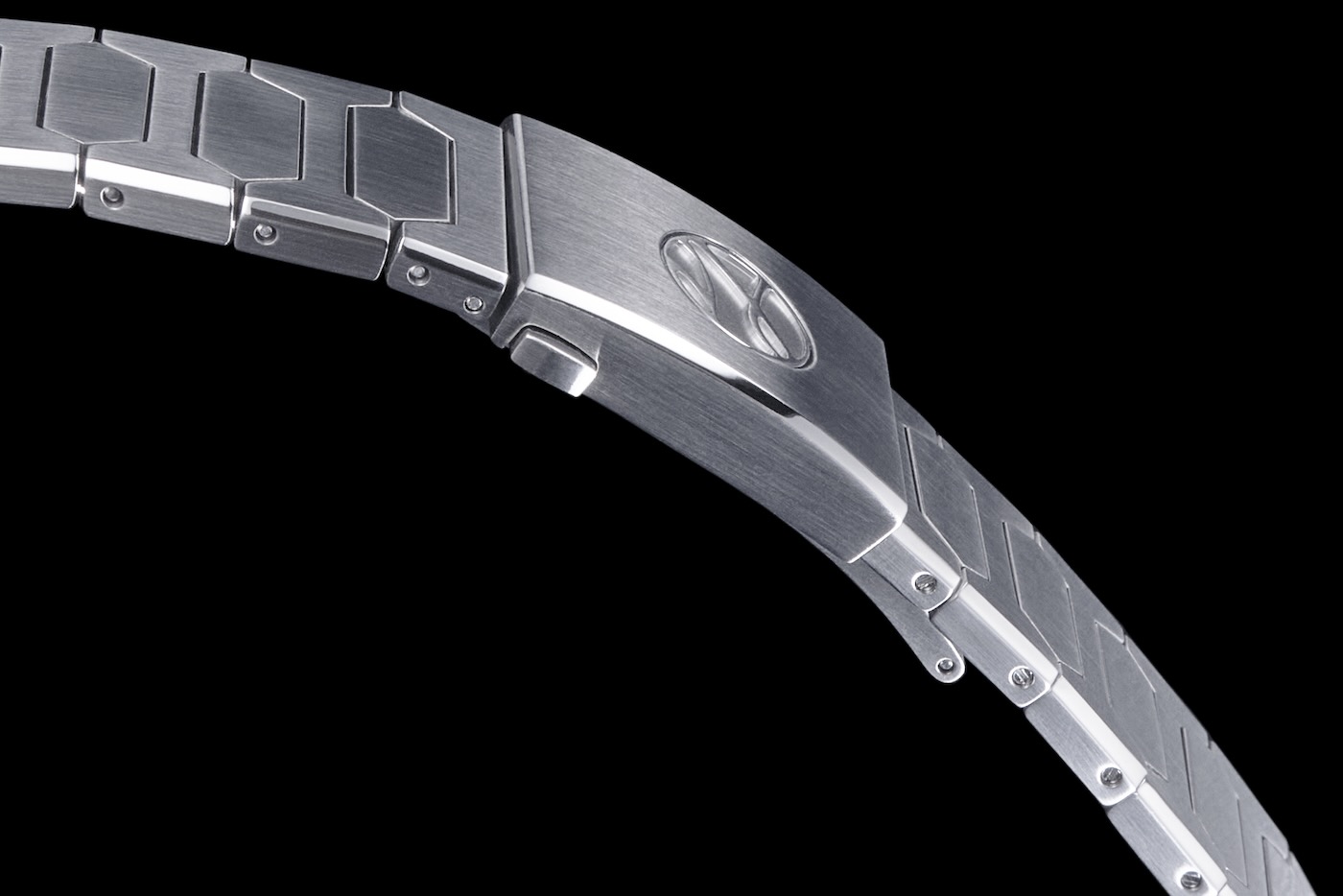 Integrating seamlessly with the case is a 904L stainless steel bracelet that continues the sharp lines and polished bevels through a modified, angular H-link design. The custom-milled push-button clasp also features tool-free micro-adjustments for on-the-fly changes. For those looking to change up the look every now and again, Atelier Wen has also produced a rubber strap that pairs with the integrated lugs. 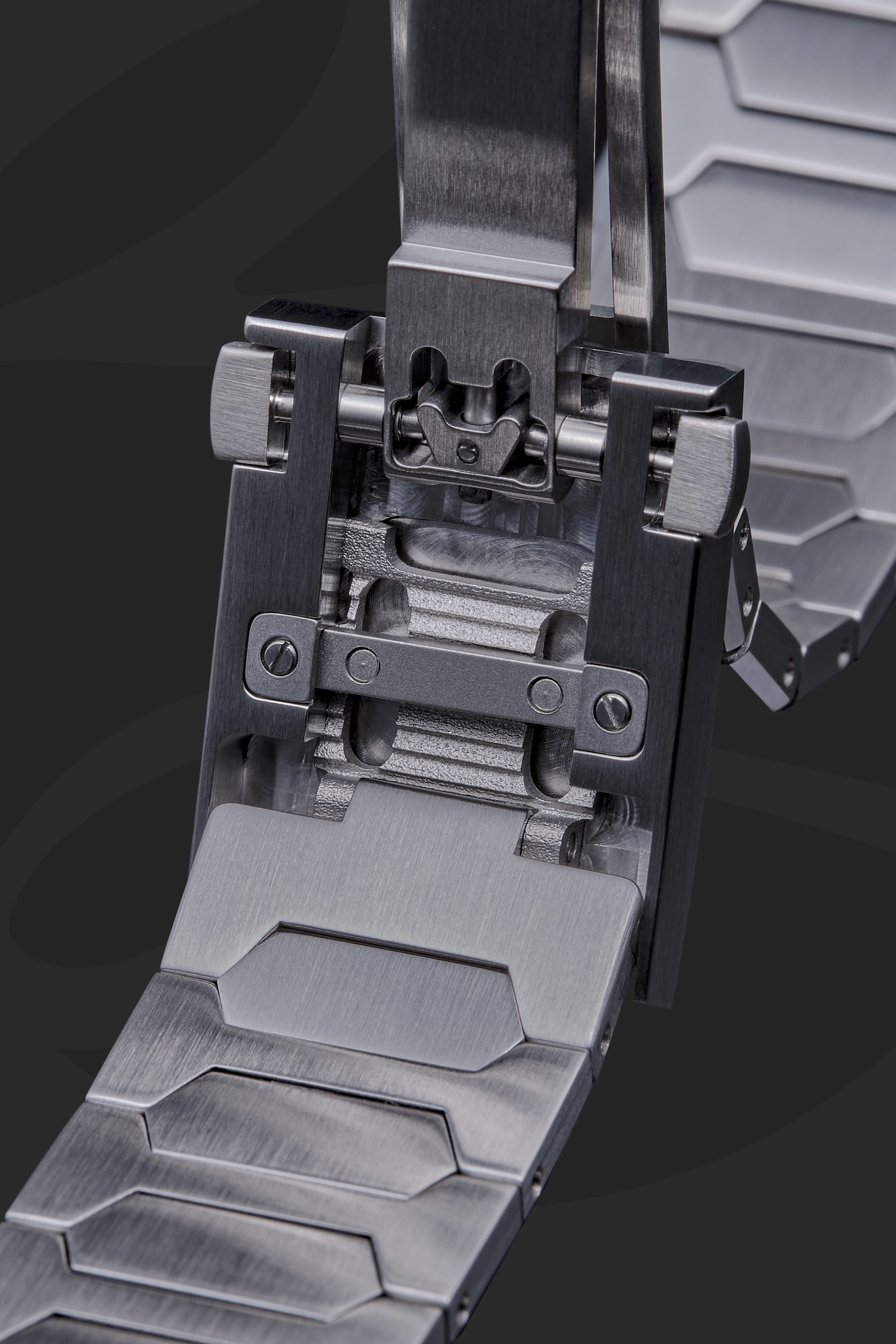 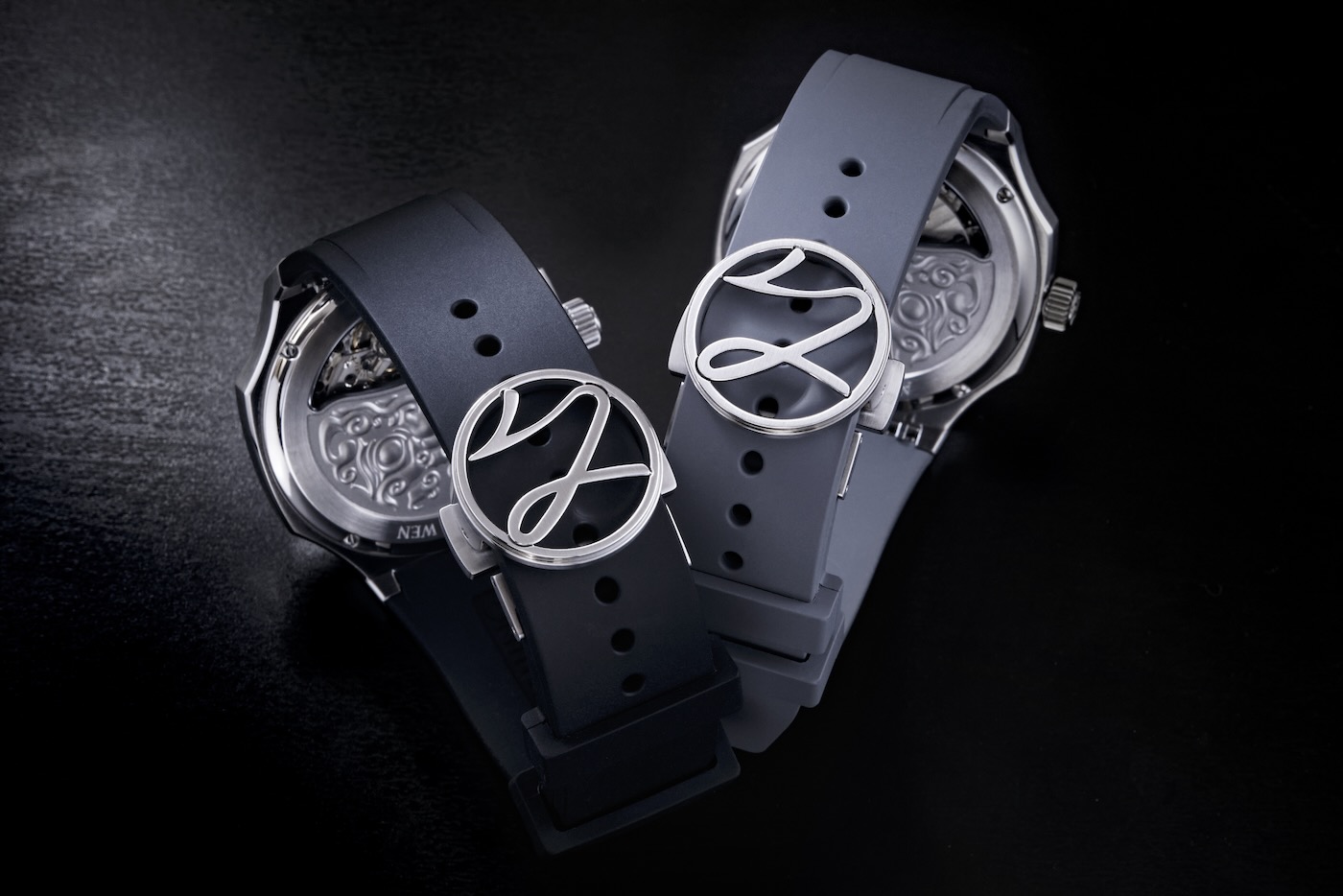 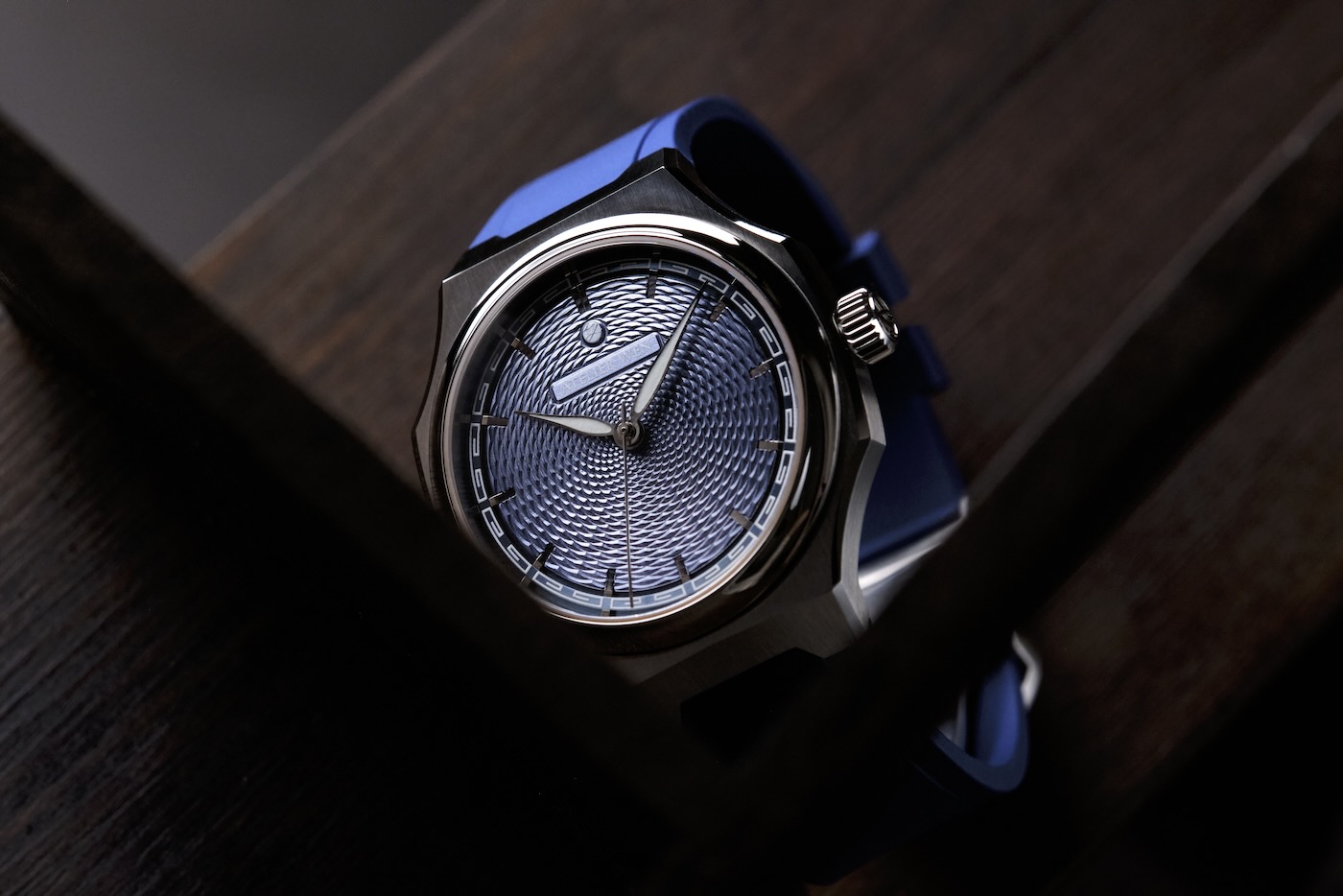 No surprise that the Perception is powered by a Chinese movement, the Dandong Peacock automatic movement. Produced in the Dandong Watch Factory in Northeast China, the SL 1588 movement is customized for Atelier Wen to be extra thin at only 3.3mm in thickness. Based on Dandong’s new SL-1 architecture, the SL 1588 beats at 28.8kbph and features a 41-hour power reserve. However, this movement is also decorated with côtes de Genève, perlage, and light beveling on the bridges. Atelier Wen caps off the package with a tungsten rotor with circular côtes and black rhodium plating. And, to ensure accurate timekeeping, the movement is adjusted in 5 positions. 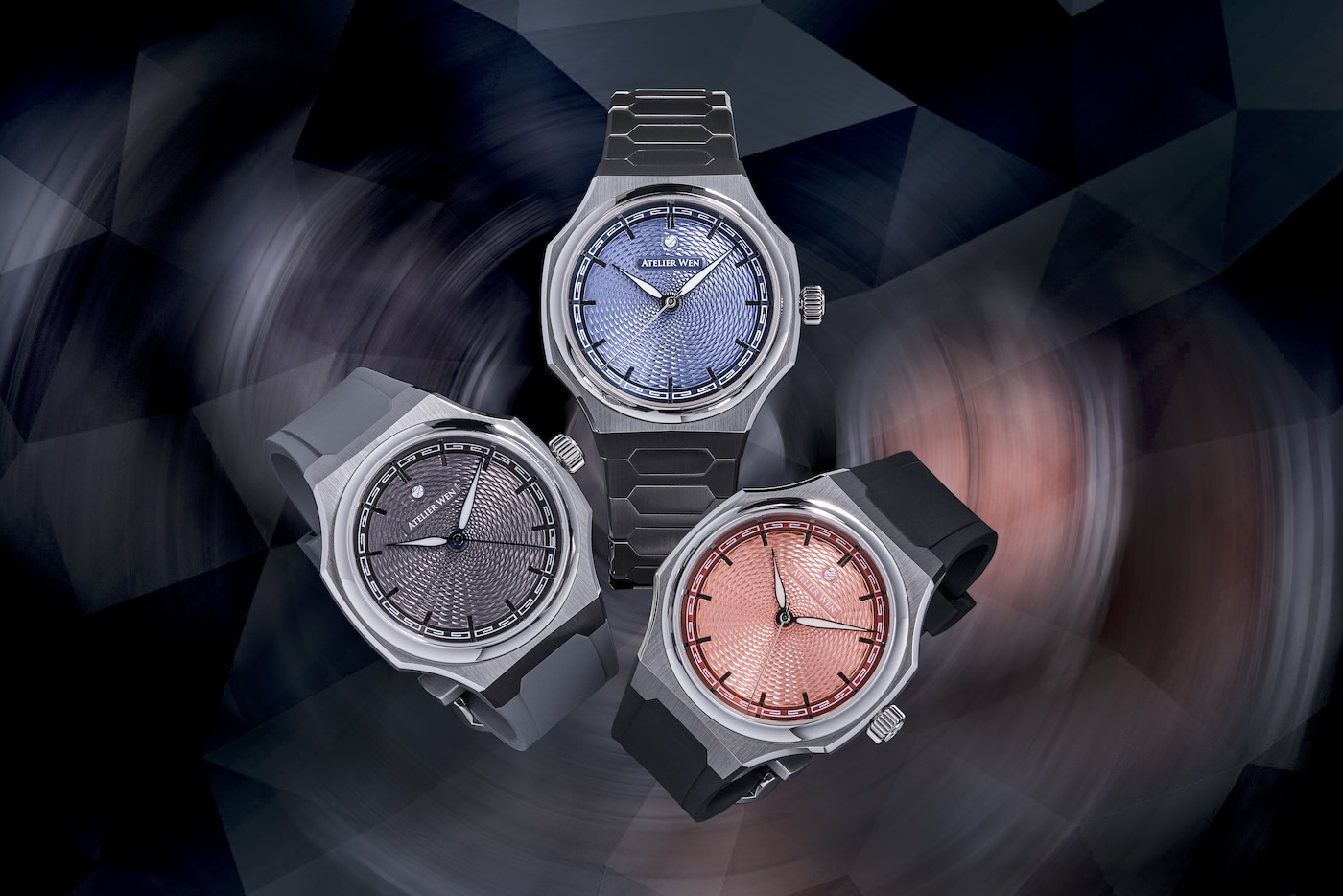 Though Atelier Wen isn’t introducing the Perception as a limited edition per se, the annual production is inherently limited by the time-intensive process of creating each dial (8 hours per dial and one master craftsman to do the work makes high volumes a bit of a challenge). If you appreciate the Perception’s mix of traditional craft combined with modern aesthetics and execution, be sure to visit the brand’s website to sign up to pre-order your watch for $2,088. Pre-orders for the first 300 units will be open from April 18-May 18, 2022, with a final price of $2,588 after the pre-order period. To learn more about Atelier Wen and the Perception, be sure to visit the brand’s website.