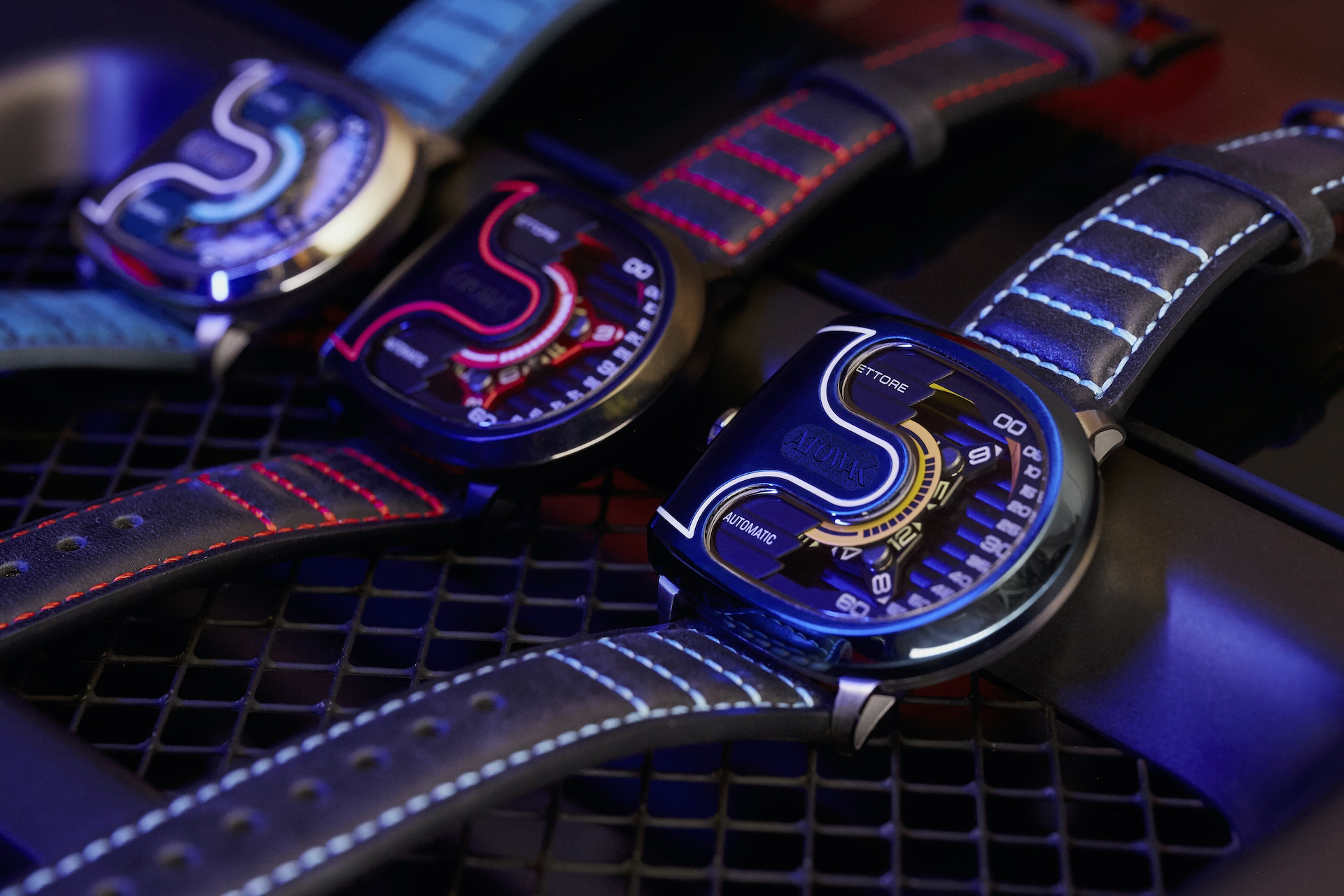 21 Comments
by SponsoredPost
Sponsored post presented on aBlogtoWatch for advertiser

Watches and cars have always been a natural pairing, and the brains behind ATOWAK watches fit firmly in the center of the Venn diagram of watch and car enthusiasts. In releasing the ATOWAK ETTORE Drift and ETTORE Lite, the brand channeled design inspiration from supercars. And why not? If you’re looking for avant-garde design, premium materials, and an eye-catching aesthetic, supercars have them all in spades. But ATOWAK went well beyond aesthetics when designing its first release — a look under the hood reveals extensive movement modifications to bring a wandering hours complication to life in the ETTORE Drift. Despite this complication typically being found only in high-end luxury timepieces, ATOWAK brings this complication to the masses, with Kickstarter pricing beginning at just $549 for the ETTORE Drift. If the design of the ETTORE appeals to you, but you can live without the wandering hours complication, the ETTORE Lite utilizes a retrograde time display at a starting price of only $299. 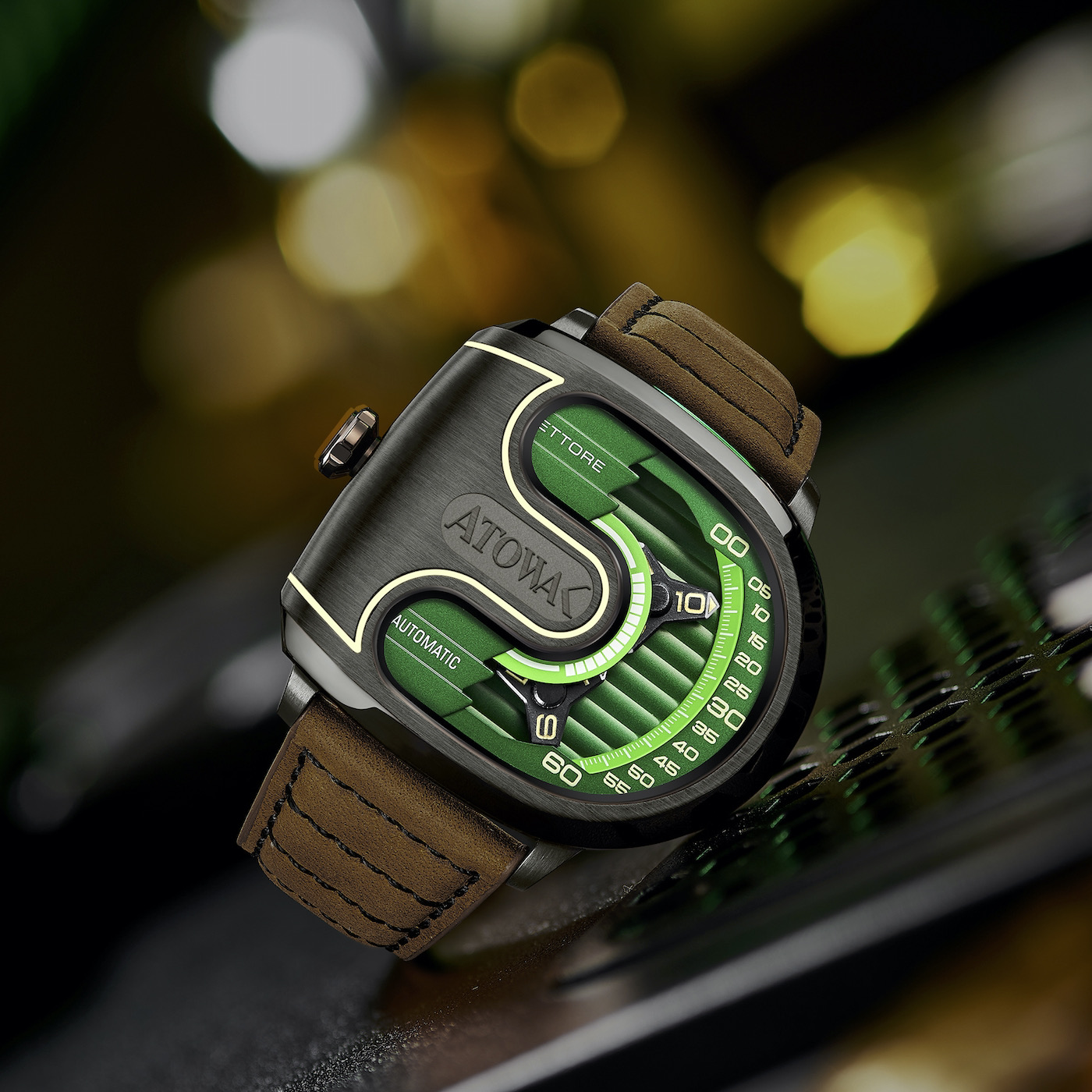 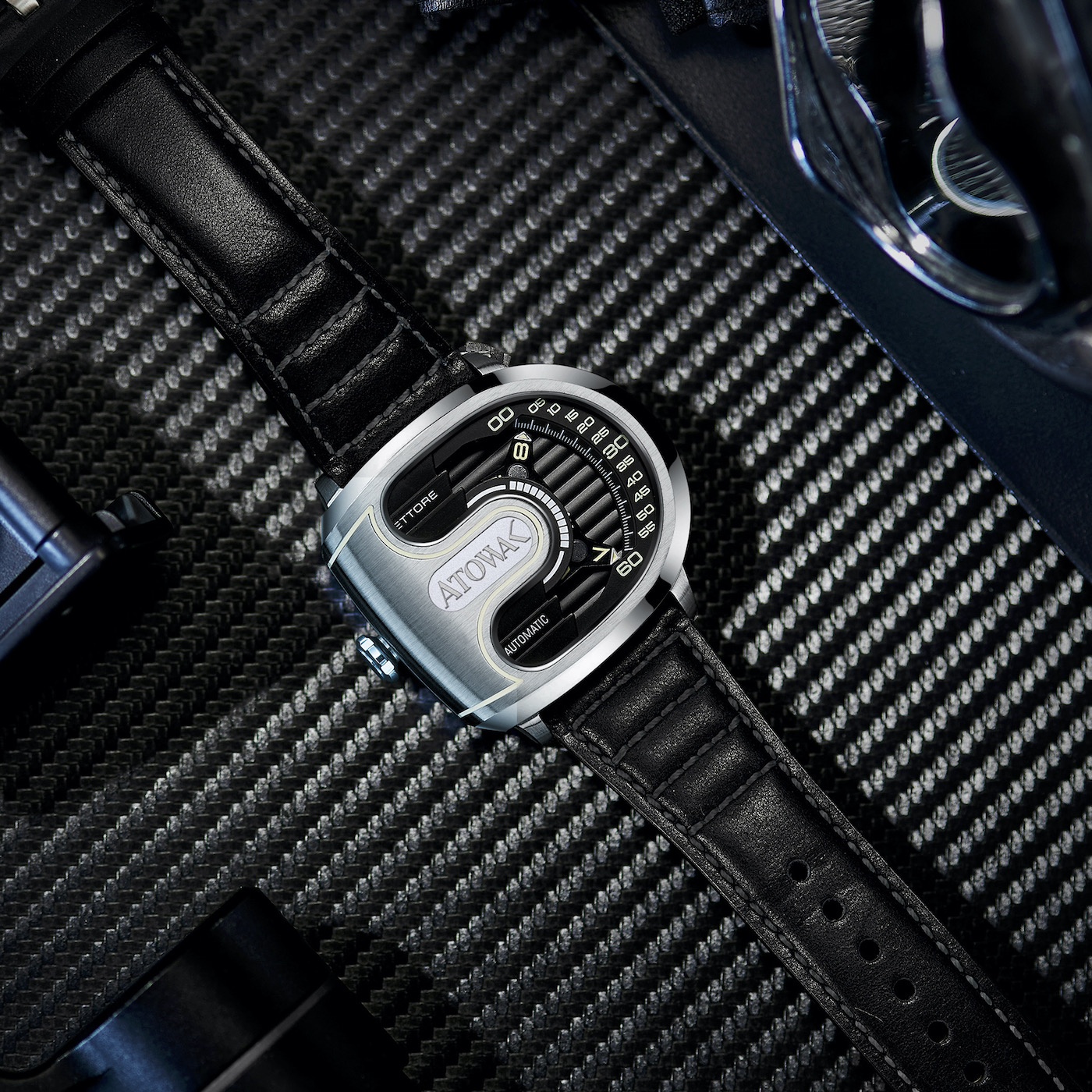 Describing the inspiration behind the ETTORE line, ATOWAK’s CEO, Johnny Deng, explains, “At ATOWAK, our focus is to always push the boundaries of style and provide our community with watches that are unique. We found our inspiration for ETTORE in the world of supercars and racing. The bold lines and sensation of speed found in the fastest cars informed the subtle curves of our watch, and its intriguing method of indicating the time subverts the concept of traditional mechanical watches.” 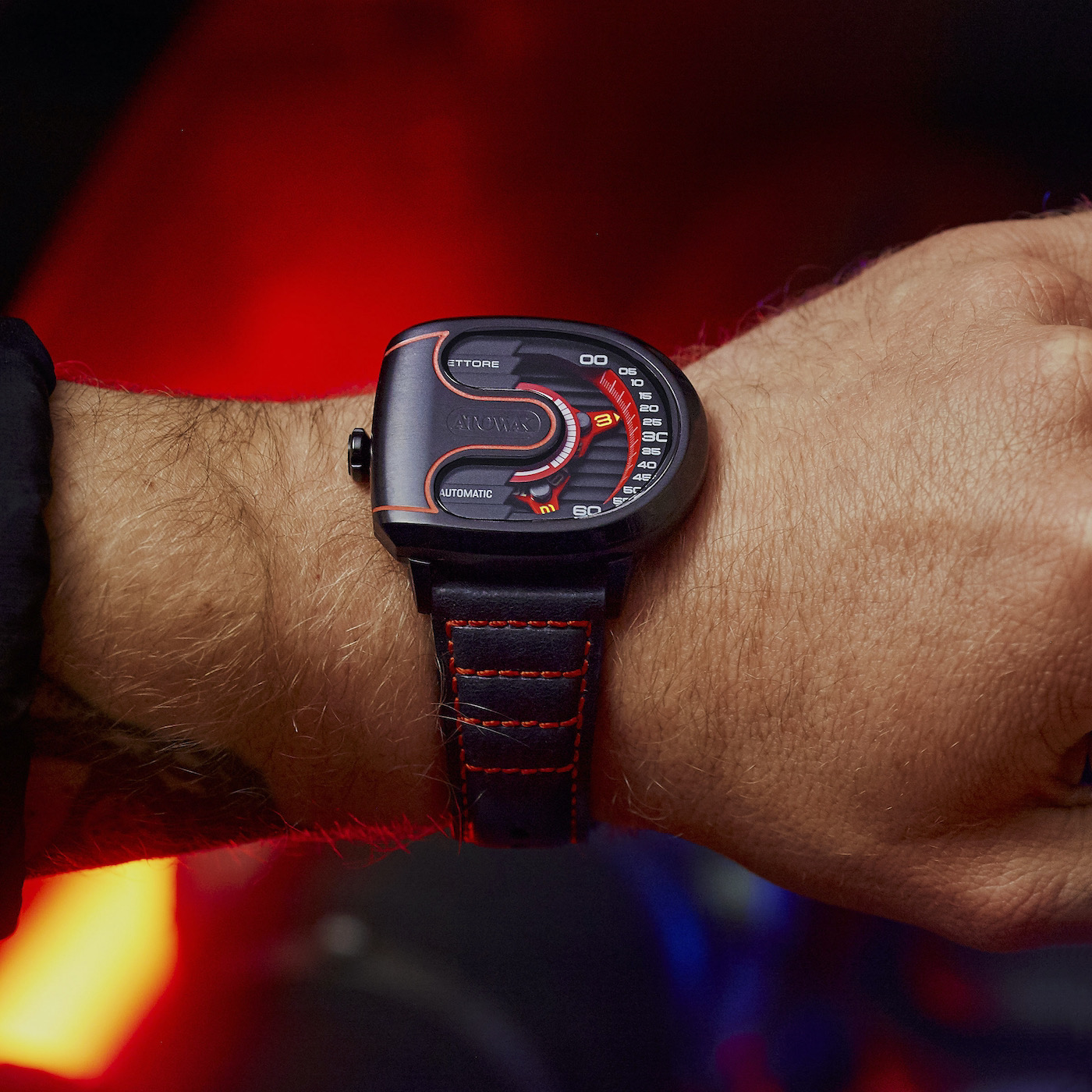 Both the ETTORE Drift and Lite share a similarly shaped case crafted of 316-L stainless-steel measuring in at 46.5mm in width. However, given the shape of the piece, traditional dimensions can be misleading — from the 12 o’clock to 6 o’clock edge of the case, the watch measures only 40.8mm, meaning that you get plenty of wrist presence in a comfortable package. The unique, asymmetrical case shape is a classic example of form following function, both for ETTORE Drift and Lite. 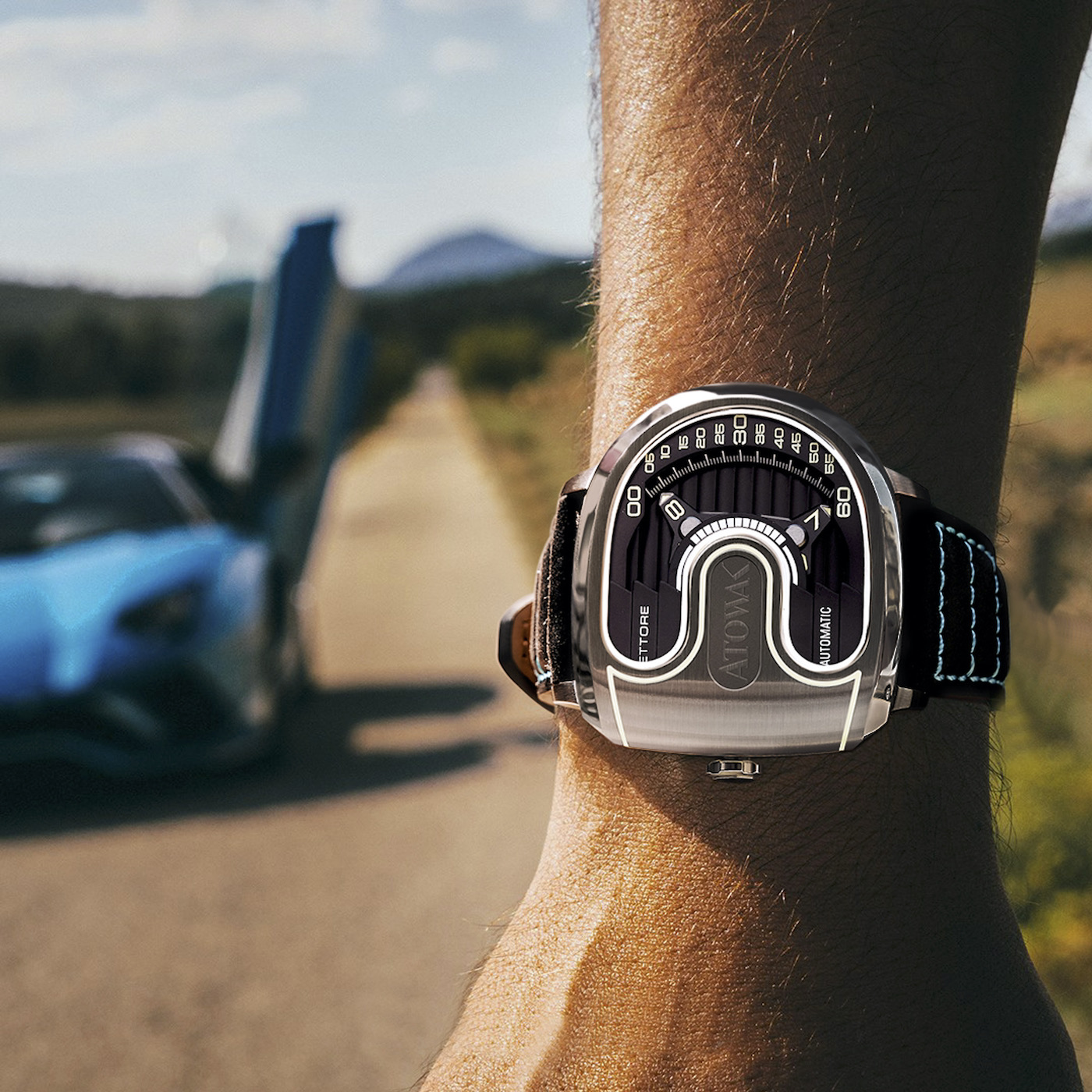 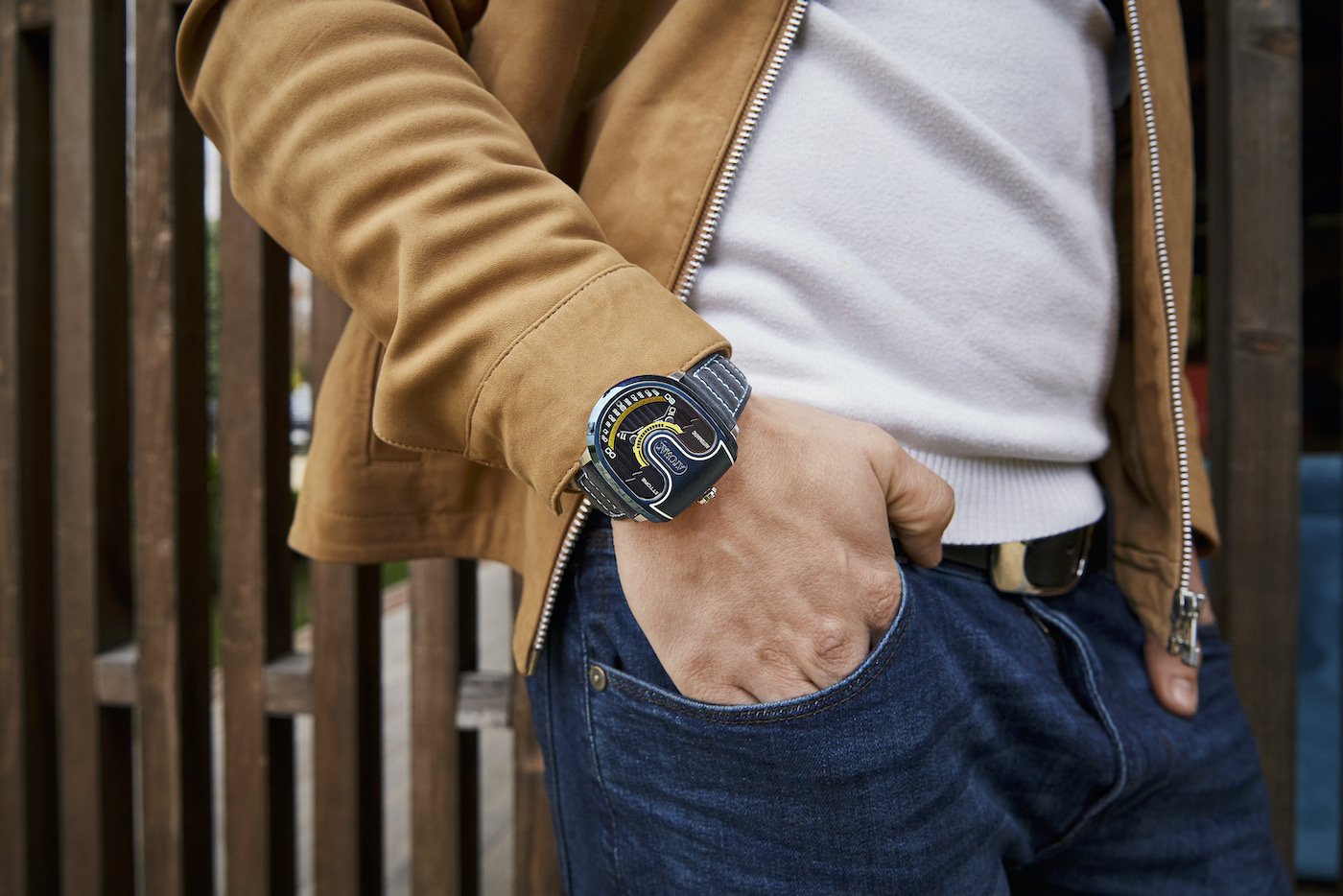 In the flagship ETTORE Drift, only the right side of the dial is exposed under a sapphire crystal, focusing the eye directly on the wandering hours and retrograde minutes. The wandering hours complication is a fascinating one. First introduced by the Campani brothers in the 1600s, the complication works by utilizing three or four arms that radiate out from the center of the dial, each arm tipped with a disc or spokes that display the hour. As the central arms rotate around the dial, the hour aligns with the retrograde minutes track, allowing for quick and easy time-telling. As you pass to the next hour, the smaller spokes rotate into position, displaying the correct hour atop the retrograde minutes track — complicated to produce, but surprisingly effective for telling the time in a distinctive and rarely seen complication, especially at this price point. Wandering hours complications are typically the domain of brands like Audemars Piaget and Urwerk, with prices orders of magnitude higher than the ATOWAK ETTORE Drift. 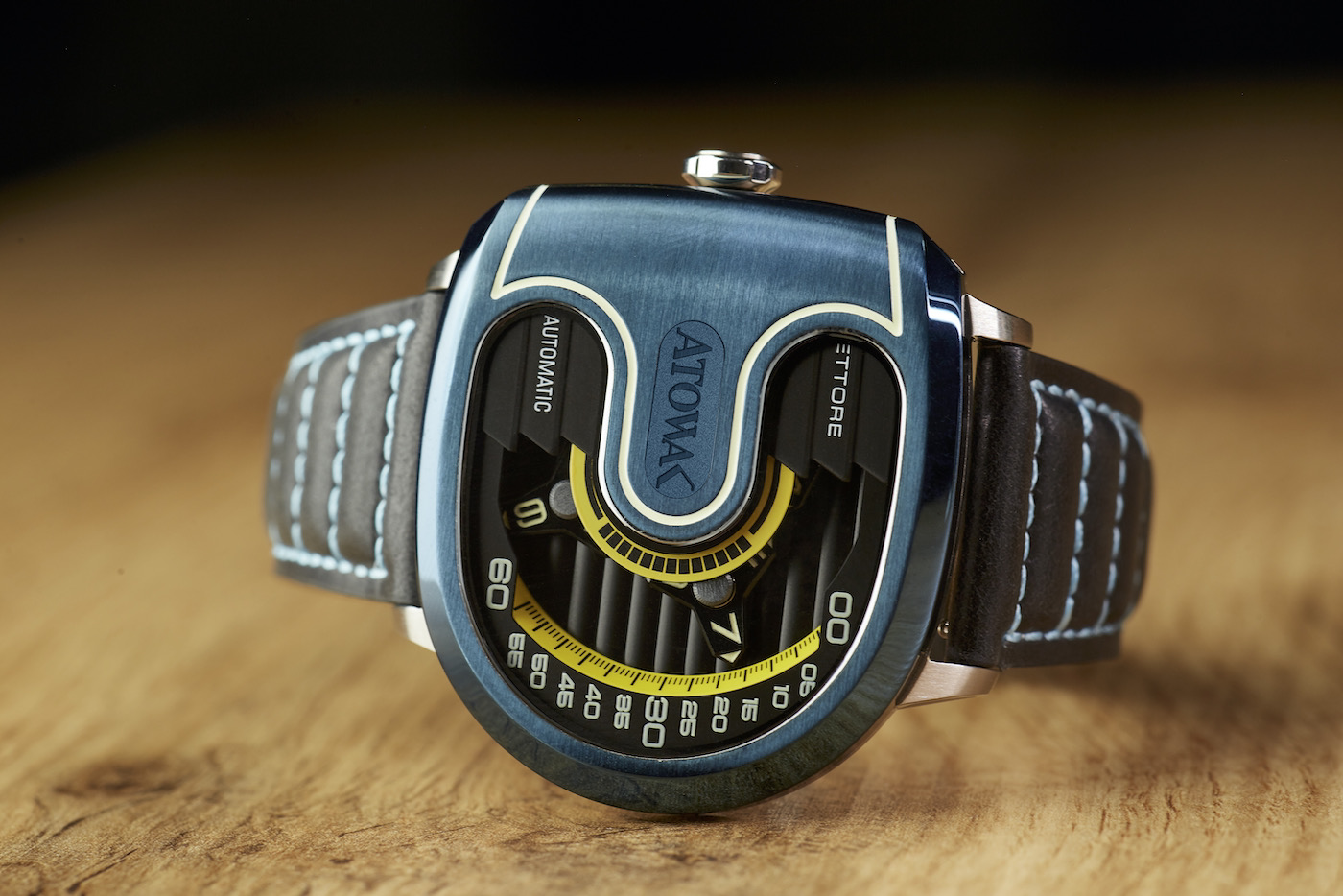 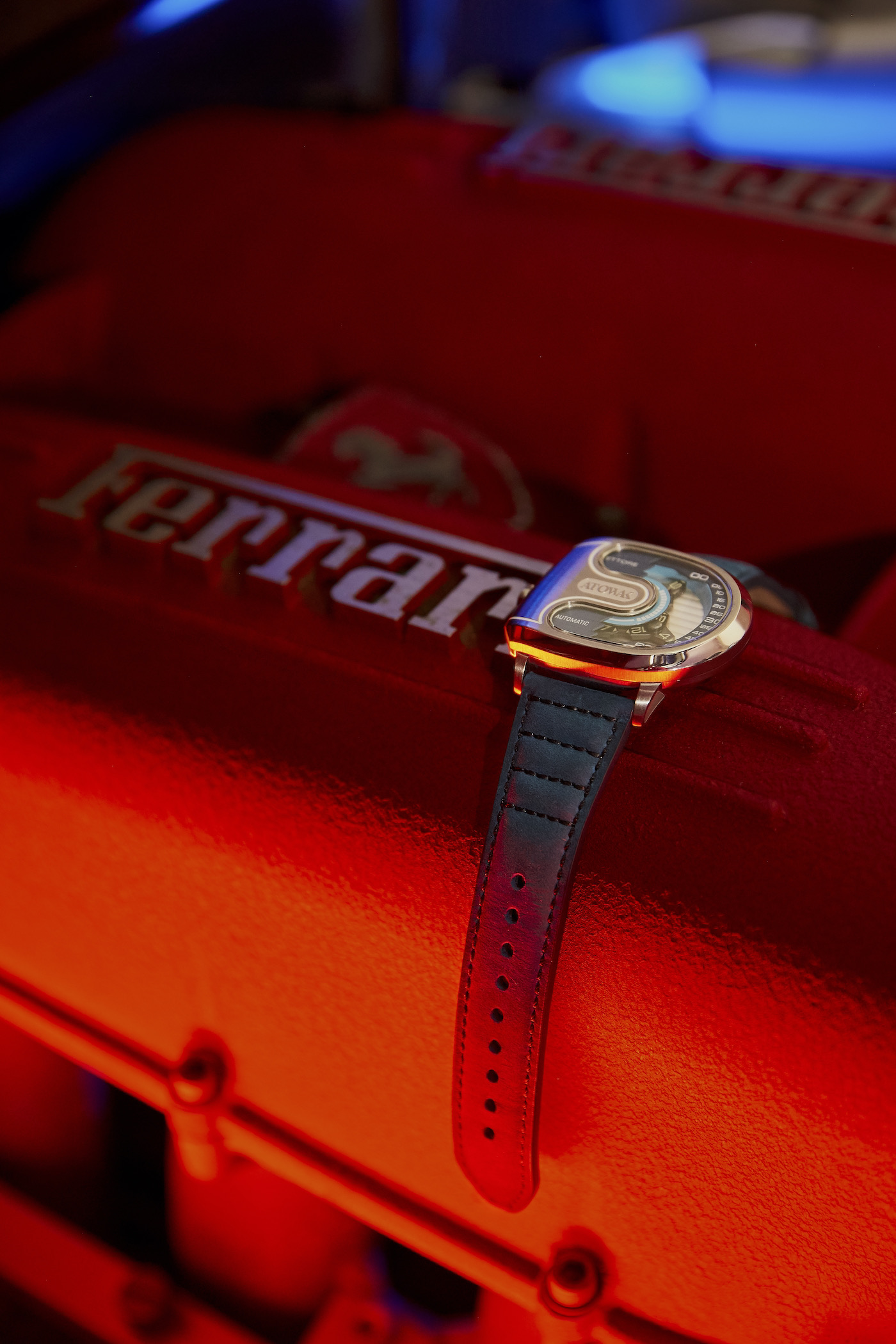 To create the wandering hours complication, ATOWAK began with a tried-and-trusted Miyota 9015 automatic movement. After three years of research and development, ATOWAK completely reworked and redesigned the movement to accommodate the wandering hours complication. The result is mesmerizing and certainly a conversation starter. The numerals, hands, and profile curves on both watches are illuminated with Super-LumiNova, resulting in a display that remains engaging, even in the dark. 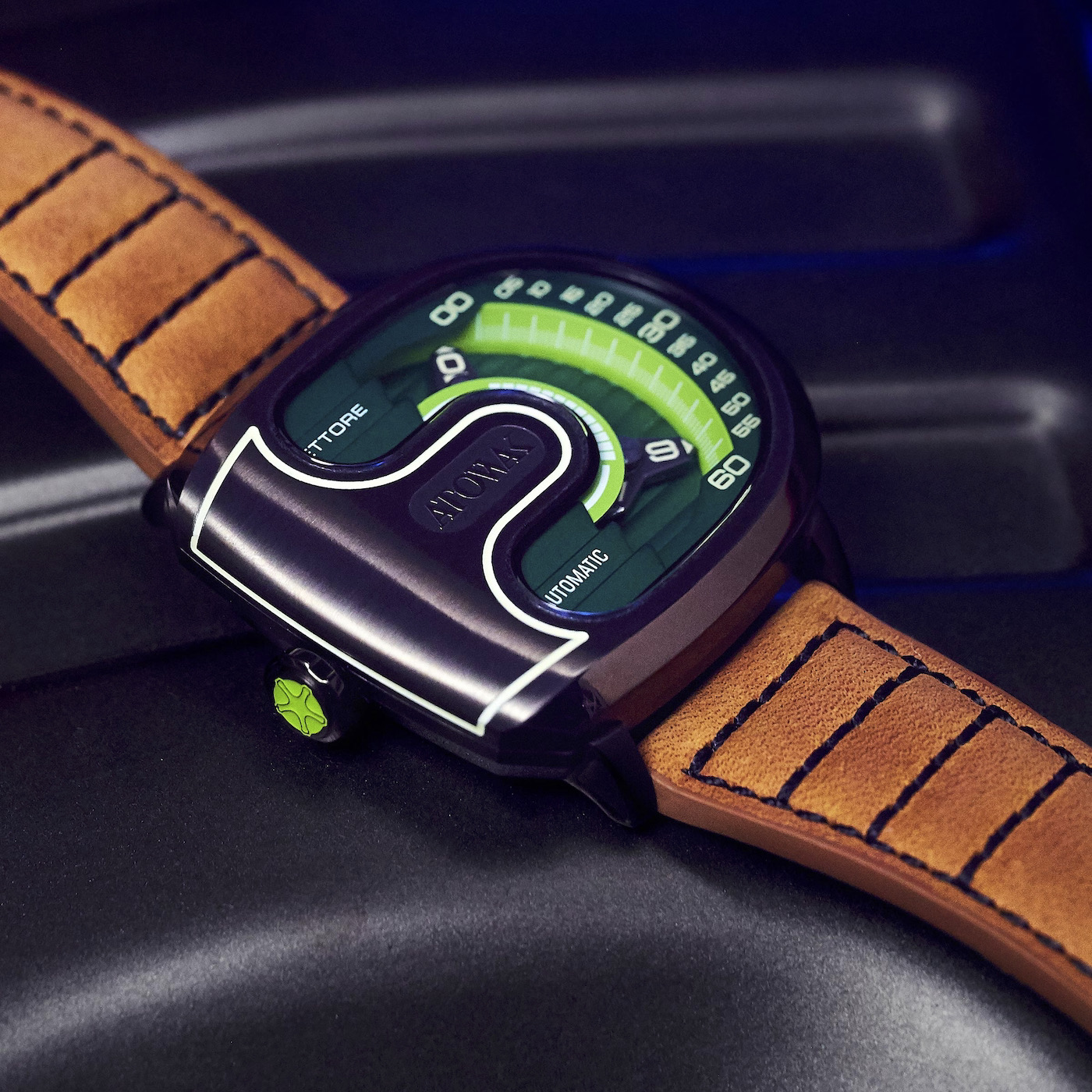 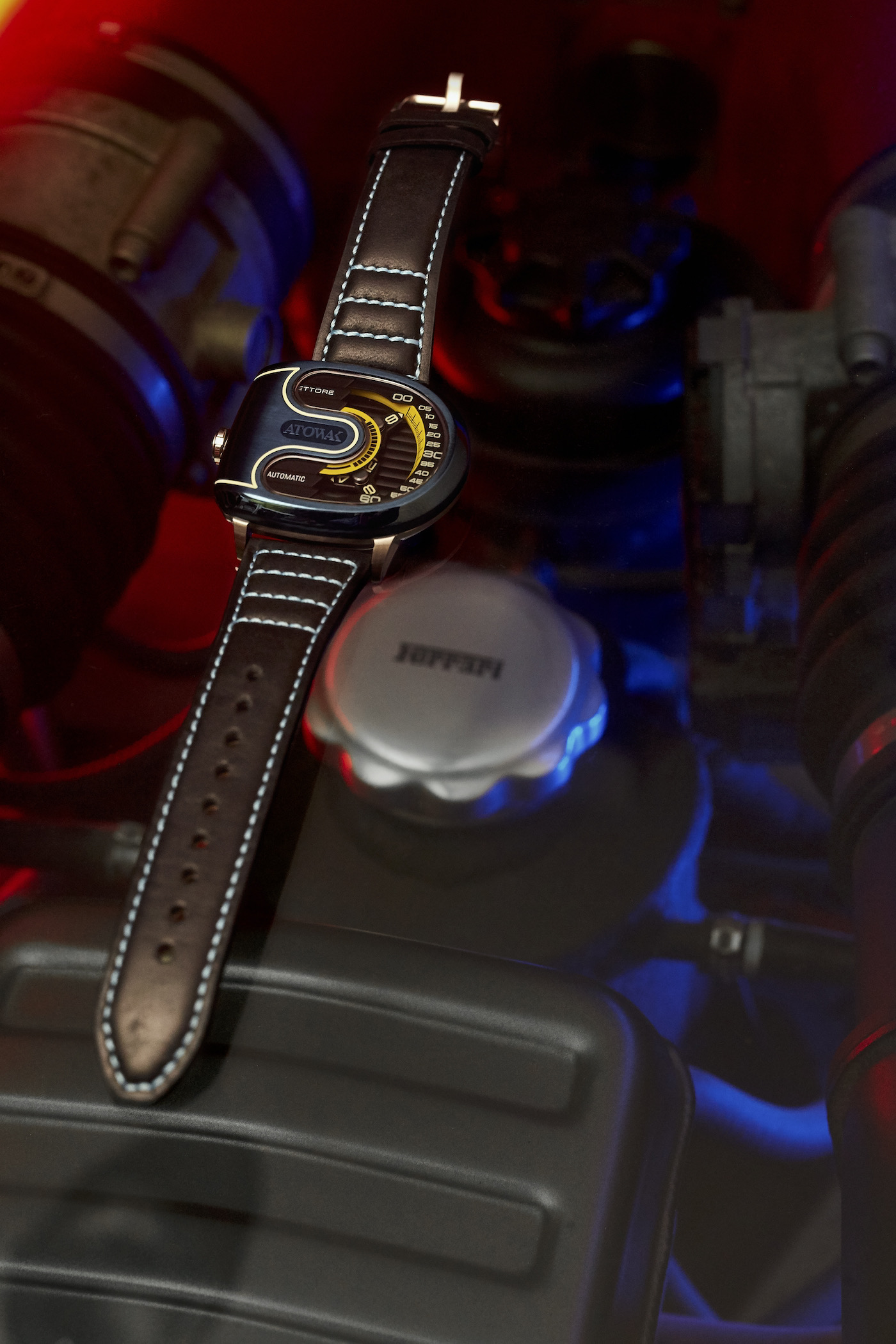 The ATOWAK ETTORE Lite captures the essence of the Drift in a simpler, more budget-friendly package. Unlike the wandering hours complication, the retrograde display on the Lite required relatively minor modifications to the Miyota 8215 powering the watch. Once again, you get a 3D copper and aircraft-grade aluminum dial with luminous indices capped by a sapphire crystal. However, the ETTORE Lite flips the time-telling layout, with the hours indicated along the outer track and minutes on the inner track. Regardless of which watch appeals to your sense of style (or wallet), both evoke an unmistakable automotive aesthetic, from the sculptural case design to the retrograde tracks. 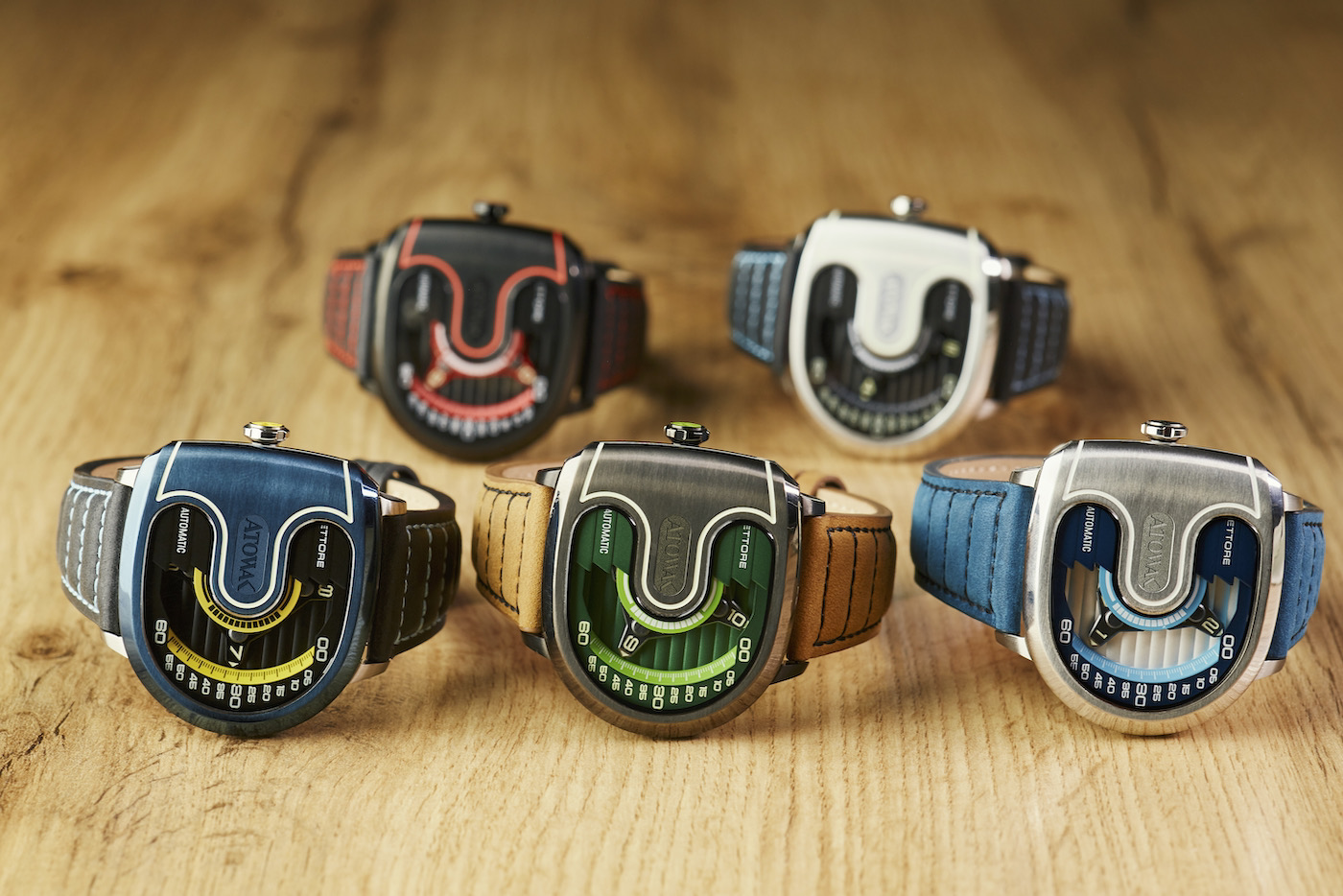 Completing the package, both the ETTORE Drift and Lite come mounted on tapering 24mm Italian leather straps. The supple leather straps look right at home in the luxurious interiors of supercars. The ATOWAK ETTORE Drift and Lite are both available on Kickstarter, with launch day specials starting at $549 USD (MSRP $1,199) for the ETTORE Drift and $299 USD (MSRP $649) for the ETTORE Lite. Each colorway is limited to just 500 pieces, with each watch individually numbered. All models will include a two-year international warranty. To learn more about the ATOWAK ETTORE, be sure to check out the campaign on Kickstarter.